THIS BEAUTIFUL WALL-based bookshelf was created at the peak of Gio Ponti’s fame and expansive experimentation as a furniture designer. Made in highly valued burr walnut by the esteemed Milanese cabinet-maker Giordano Chiesa (with whom the endlessly versatile and inventive Italian architect and designer collaborated regularly through the 1940s and 1950s), it consists of four shelves with two swing doors that can be locked with a key. It is a joyful celebration of domesticity – of how we express ourselves within our homes – as well as being related to an innovative series of wall-based pieces (“dashboard walls”) pioneered in Ponti’s commissions for the Casa Ceccato in Milan from 1949.

The “dashboard wall” was a response to arch-modernist Le Corbusier’s concept of the house as a “machine à habiter” – a machine for living in. An admirer and friend of the French architect since the 1930s, Ponti created his first “dashboard wall” in 1948, made to measure for his desk as editor of Domus, the architecture and interior design magazine he had founded in 1928, and the editorship of which he had just once again taken up. The dashboard wall was intended to hold everything one might need – including lights, typewriter and telephone. But it was in the private apartment of Mr Ceccato, owner of the Dulciora confectionery empire, on the via Monferrato, that he was able to develop the concept further, off-setting the rationality of a functional architectural element – that could do service as book case, desk, or sculptural display case – with the pure aesthetic value of the beautifully marked walnut-burr.

This bookcase has its own unique sculptural value and asymmetric energy, and is cheerfully set off to its best advantage in this image by an array of Gio Ponti’s enamel on copper creatures, made by Paolo De Poli. All are up for auction on Monday 28th September as part of Artcurial’s Italian Design sale, in Paris. 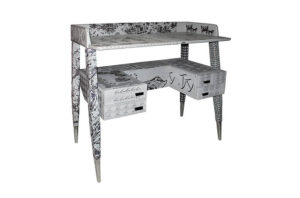 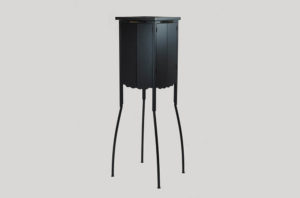 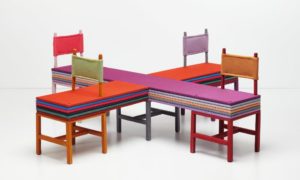 Object of the Week
'A Trifle of Colour', 2020
Yinka Ilori
By TDE Editorial Team
The Design Edit
For Collectors and Dreamers
Read
Connect
Legal
Join Our Bi-monthly Mailer
Follow and Share
© 2021 The Design Edit.
All Rights Reserverd