The Design Edit picks out ten exceptional pieces sold at auction this year. 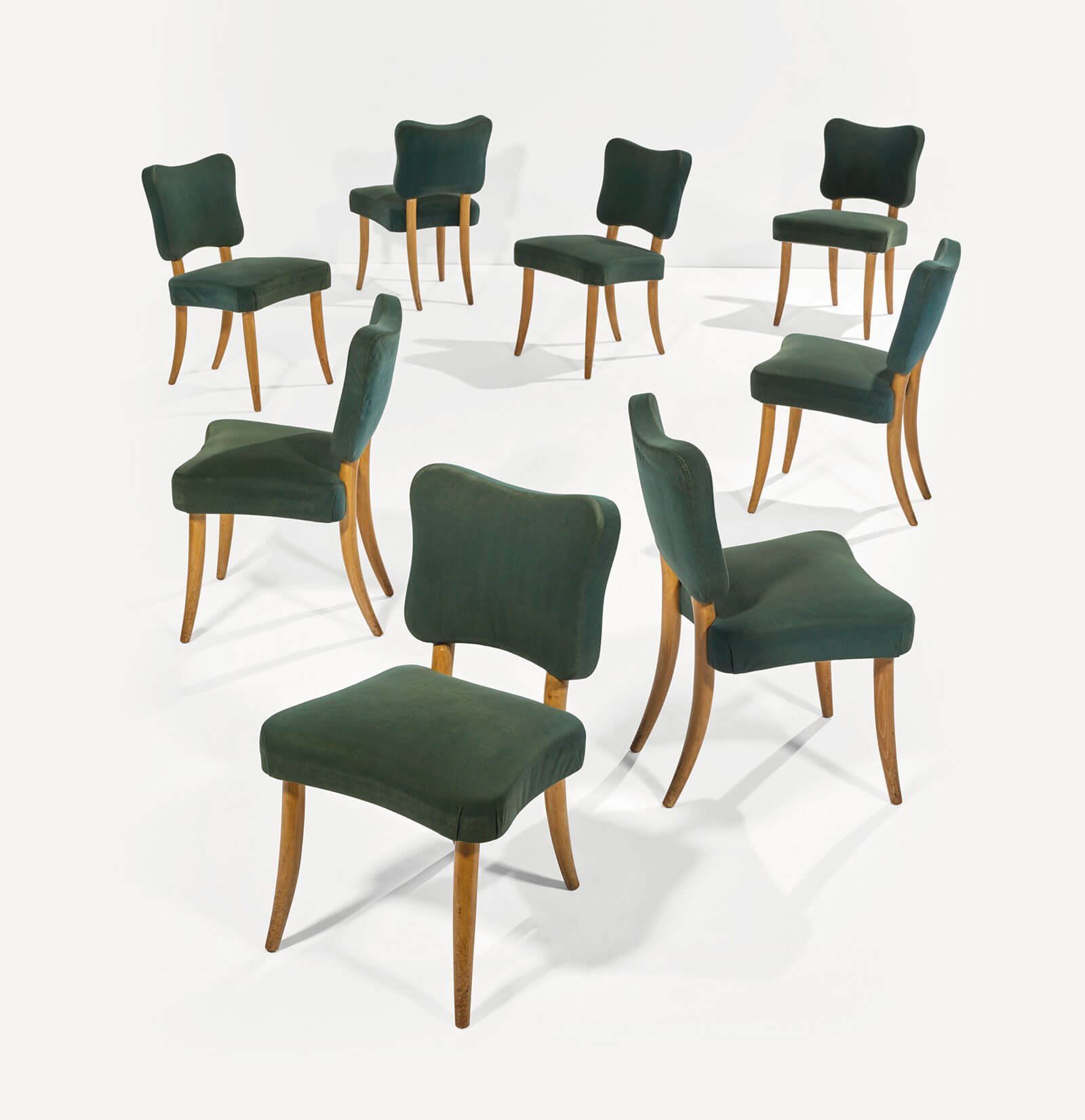 THIS YEAR MAY have been a dismal year in most respects, but at least the auction market held up, inspiring auctioneers to ever more inventive types of selling. Big-ticket lots were offered in contemporary art sales, rather than design-specific ones. And even design sales became more edited, focusing exclusively on Italian or Scandinavian design, or lighting. And new records were set by online-only sales.

This isn’t a list of the ten highest-yielding lots – that would have been too dominated by François-Xavier Lalanne and Jean Royère – but all of the lots below were exceptional in their way.

Carlo Mollino, ‘Dining table’, 1949
Given by the Italian government to the Brooklyn Museum in 1954, Carlo Mollino’s unique 1949 glass-topped table on a stand of maple, brass and ply, has impeccable provenance. And the fact that the museum had consigned it to raise funds that will support its collections meant that it was being sold for a good cause, which is often an incentive to bid. Hence Sotheby’s decision to expose it to a potentially wider and wealthier market by offering it in a contemporary art sale, among works by Basquiat, Judd, Richter and Rothko. Even so, no one expected such fierce or prolonged bidding – it lasted almost 10 minutes – selling for $6,181,350 (with fees, against an estimate of $2m – $3m), a record not just for Mollino but for Italian design.
Sotheby’s New York, Contemporary Art evening auction, 28th October, Lot 16.

François-Xavier Lalanne, ‘Singe I’ and ‘Singe II’, 1999
In October 2019, Sotheby’s Paris held a two-day sale, L’Univers Lalanne, at which 274 works from the collection of Claude and François Xavier Lalanne were sold, totalling more than €90 million. Among the seven-figure lots were a pair of patinated bronze monkeys, ‘Singe SI’ and ‘Singe SII’, which sold for €1,572,500 (a sum that nevertheless paled beside the €5,404,400 achieved by a unique ‘Rhinocrétaire’ desk). This year the market has remained mad for Lalanne. And when two similar simian figures, only this time gilded – from the collection of Felix Rohatyn, former US ambassador to France – came up for sale, sold separately (each with an estimate of $400,000 – $600,000), they went for $3.98m and $3.5m apiece.
Sotheby’s, New York, 30th July, Lots 129 and 130. 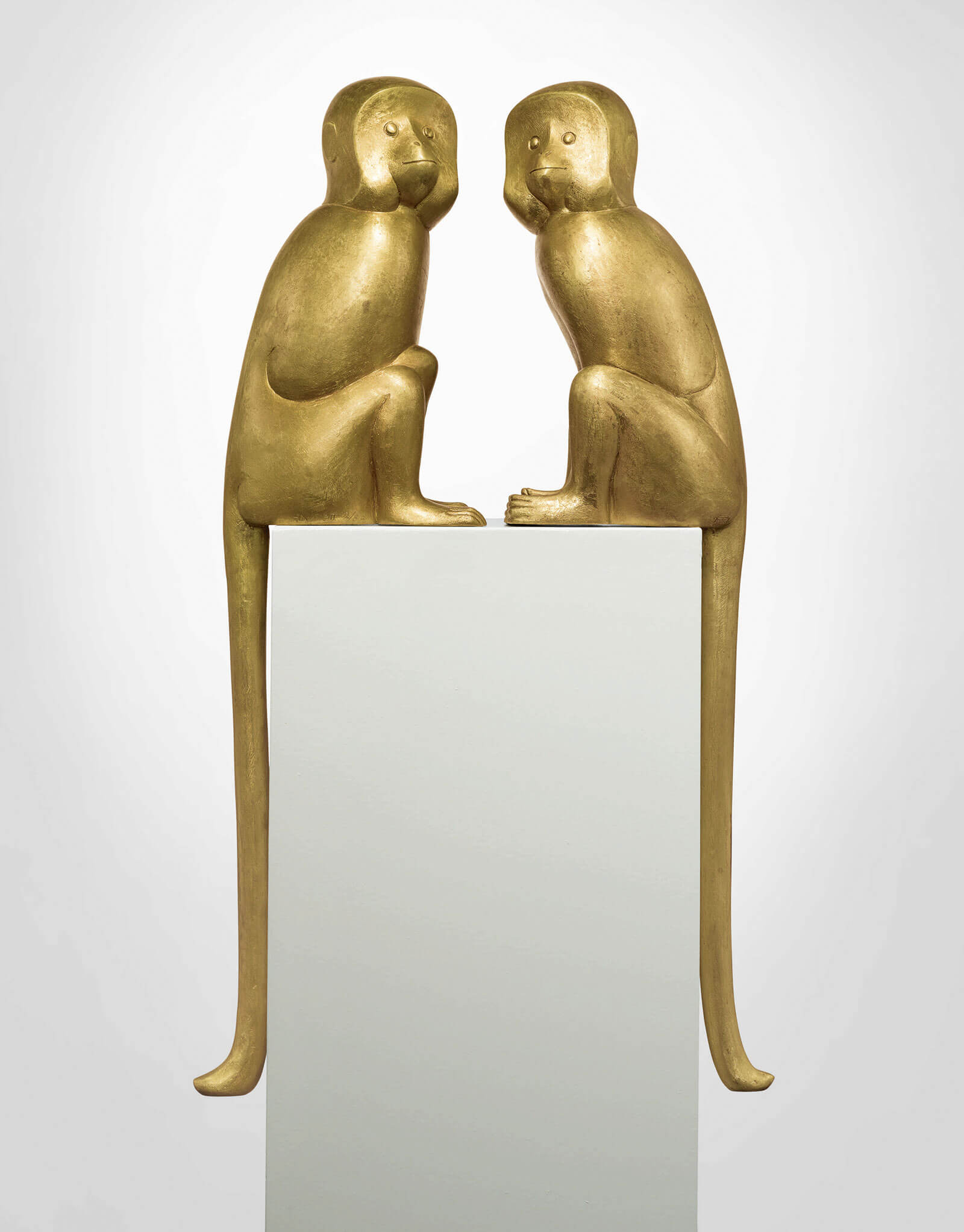 Lucio Fontana and Osvaldo Borsani, ‘Wall-mounted console’, circa 1950
The black marble and gilded-wood console that Lucio Fontana created with Osvaldo Borsani for the dining room of a private house (Casa S in Milan) was always predicted to be the leading highlight of the London saleroom’s live autumn design auction, held during the UK’s second lockdown. According to Phillips’s head of design, Europe, Domenico Raimondo it represents “the transition in Lucio Fontana’s work from his baroque-inspired forms to Spatialism”. In retrospect, however, its lower estimate of £100,000 seems modest because it sold for a spectacular £1,135,700 (including the original technical drawings and installation photographs).
Phillips Design, London, 12th November, Lot 20. 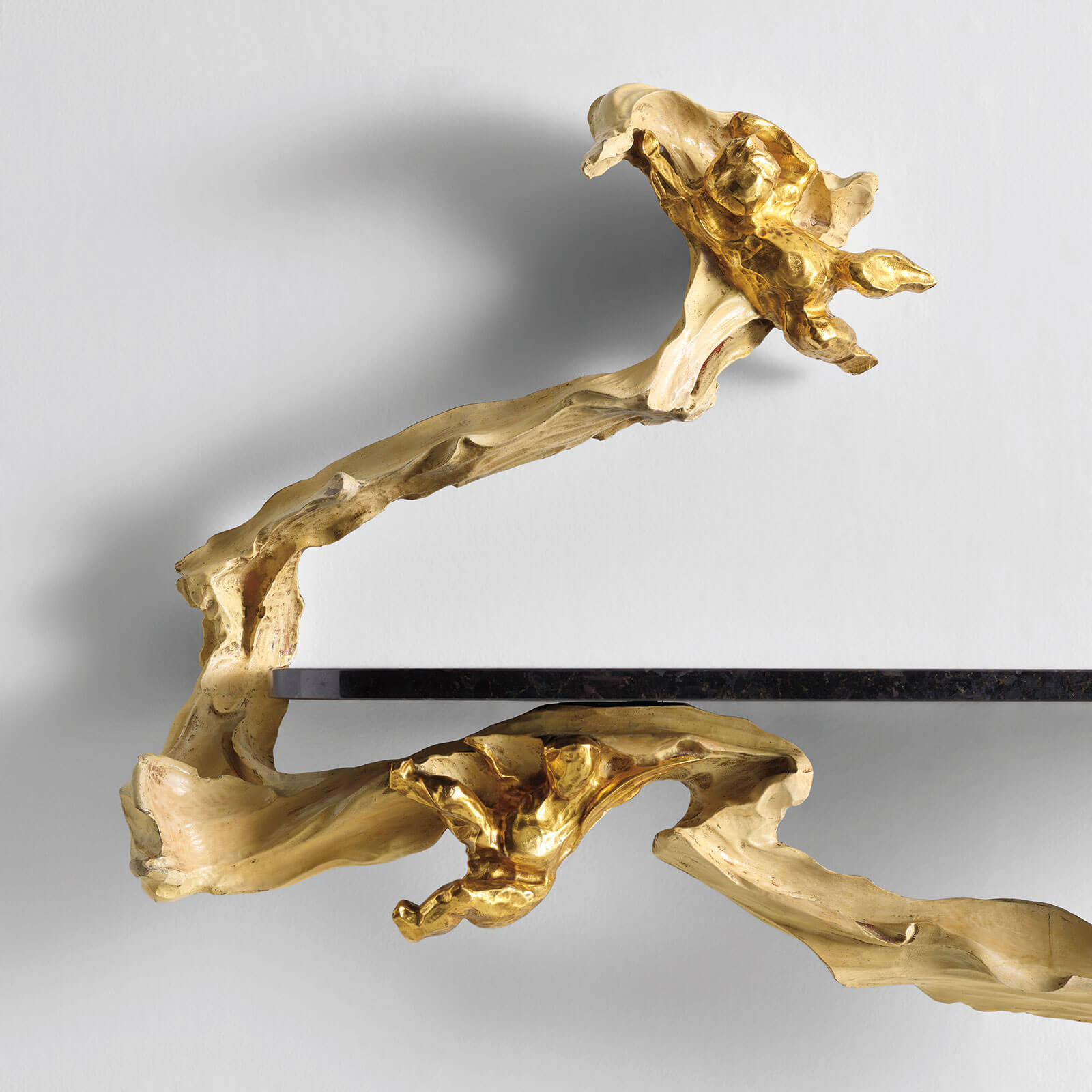 Peter Voulkos, ‘Black Balerias’, 1958
Three years ago, Phillips’s winter design evening auction in New York set a new record for the ceramic artist Peter Voulkos when it sold his sculpture ‘Rondena’ for $915,000. It was also the record for a ceramic work in a design sale. Last week, however, both records were broken, when the Montana-born artist’s monumental ‘Black Balerias’ sold for $1,264,000 (estimate: $600,000 – $800,000). Named after the stoneware from which it was constructed, it was helped by a cast-iron provenance and the knowledge that it had not only been exhibited at the Musée de l’Art Moderne in Paris in 1959 (as part of the Paris Biennale, where Voulkos won the Rodin Museum Prize), but at MOMA in New York the following year.
Phillips Design, New York, 9th December, Lot 124. 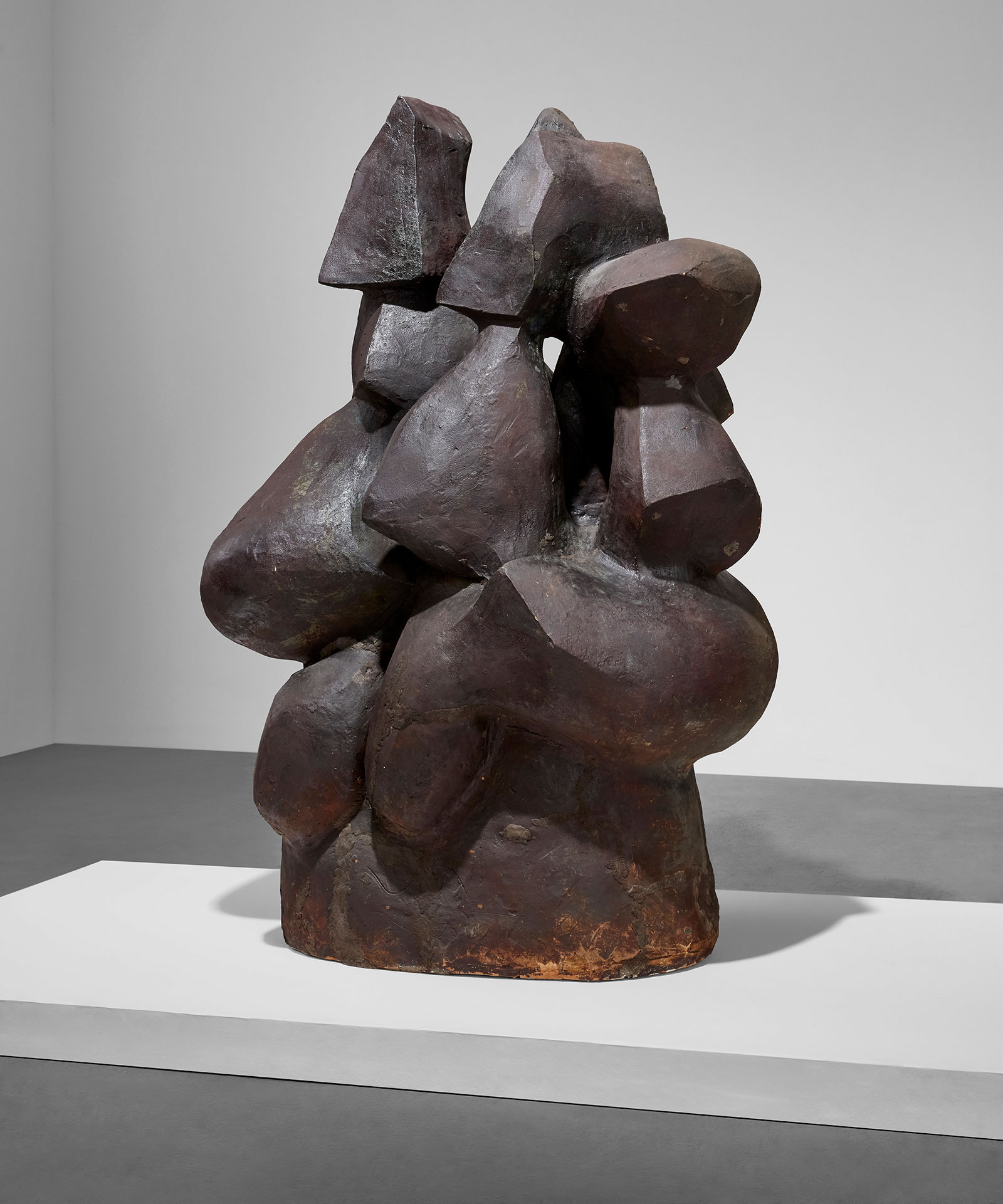 Jean Prouvé, ‘Présidence desk, model no 201’, ‘Swivel chair model no FP11’, and ‘Potence’ wall light, circa 1955
As lockdowns began to relax last summer, Christie’s “made auction history”, as they put it, with a series of live auctions held in four consecutive sessions beginning in Hong Kong, ending in New York, and taking in Paris and London between times. All but three of the 82 lots offered were works of art, and pent-up demand saw sales of almost £335m, setting seven artist records for the likes of Brice Marden, Wayne Thiebaud and George Condo. 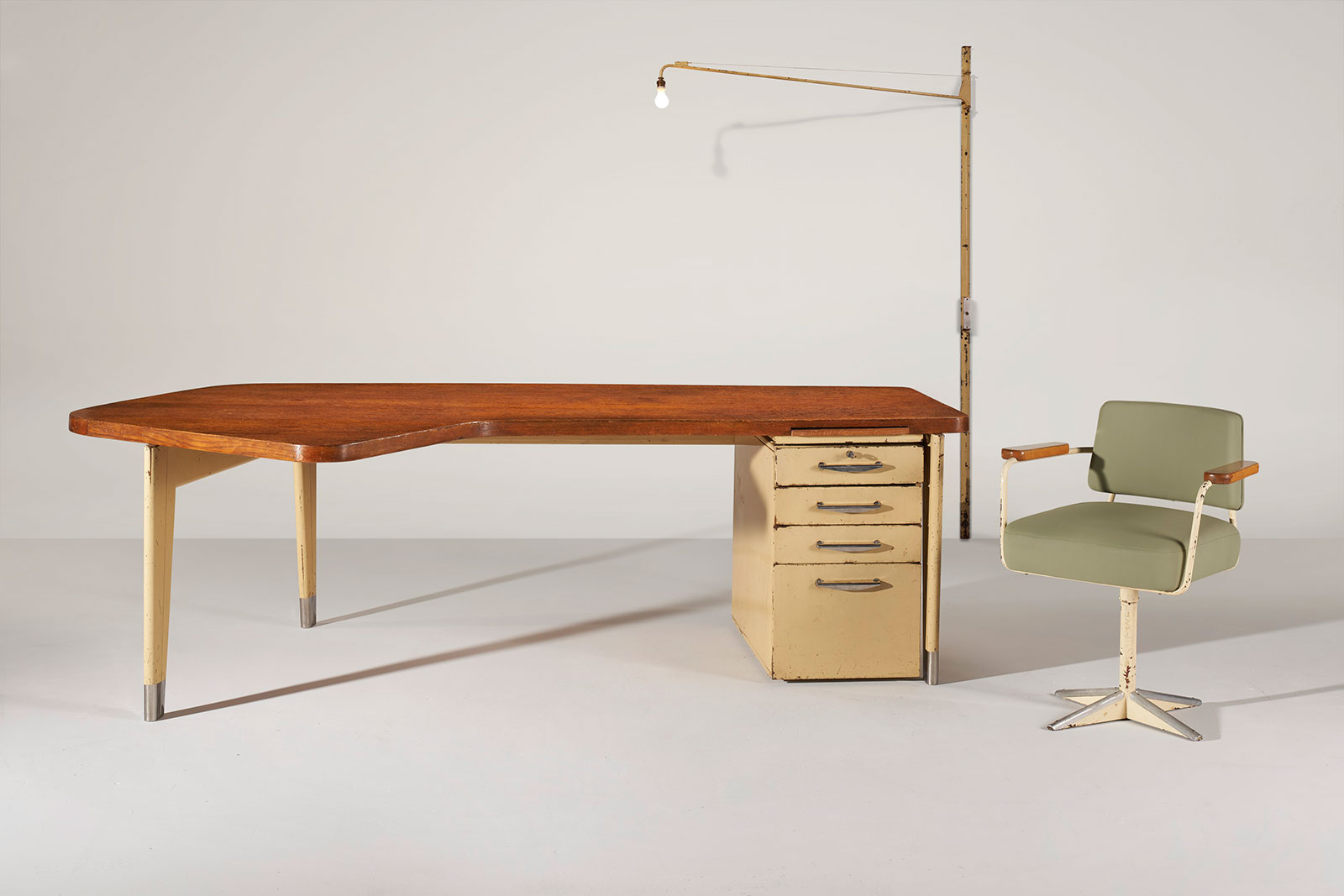 Prouvé was proving a draw at the start of the lockdowns too. In March, Sotheby’s New York sold a pair of ‘Direction’ armchairs, model no 352, consigned by Marc Jacobs, for $175,000 (est $20,000 – $30,000) amid fierce bidding from ten would-be buyers, helping propel the sale to takings of more than $4m, the highest total ever realised in an exclusively online sale of design.
Christie’s ONE: A Global Sale of the 20th Century, 10th July, Lot 75

Piero Bottoni, ‘Dining table’, circa 1950
In May 2012, Christie’s sold an “important” dining table in partially ebonised mahogany by Piero Bottoni, together with a matching sideboard and eight dining chairs for £22,500 to a private collector in Switzerland. Last month that same table, one of just three of this type, and offered alone this time, was sold again, this time at Phillips, for £403,200, ten times its lower estimate and an auction record for the designer.
Phillips Design, London, 12th November, Lot 7.

Paavo Tynell, ‘Snowflake number 1, Model 9014’ ceiling lamp, circa 1947
Most of the ‘Snowflake’ chandeliers Paavo Tynell made for his Fantasia series of light fittings for Taito Oy were surrounded by a cascade of 30, 40 or 80 perforated, or mesh brass, “snowflakes”, each one cut by hand. But this rare example from 1947 has 96, which perhaps explains why it realised €356,200 against an estimate €120,000-130,000 – establishing an auction record for the pioneer of Finnish lighting design.
Artcurial Scandinavian Design, Paris, 2nd July, Lot 5. 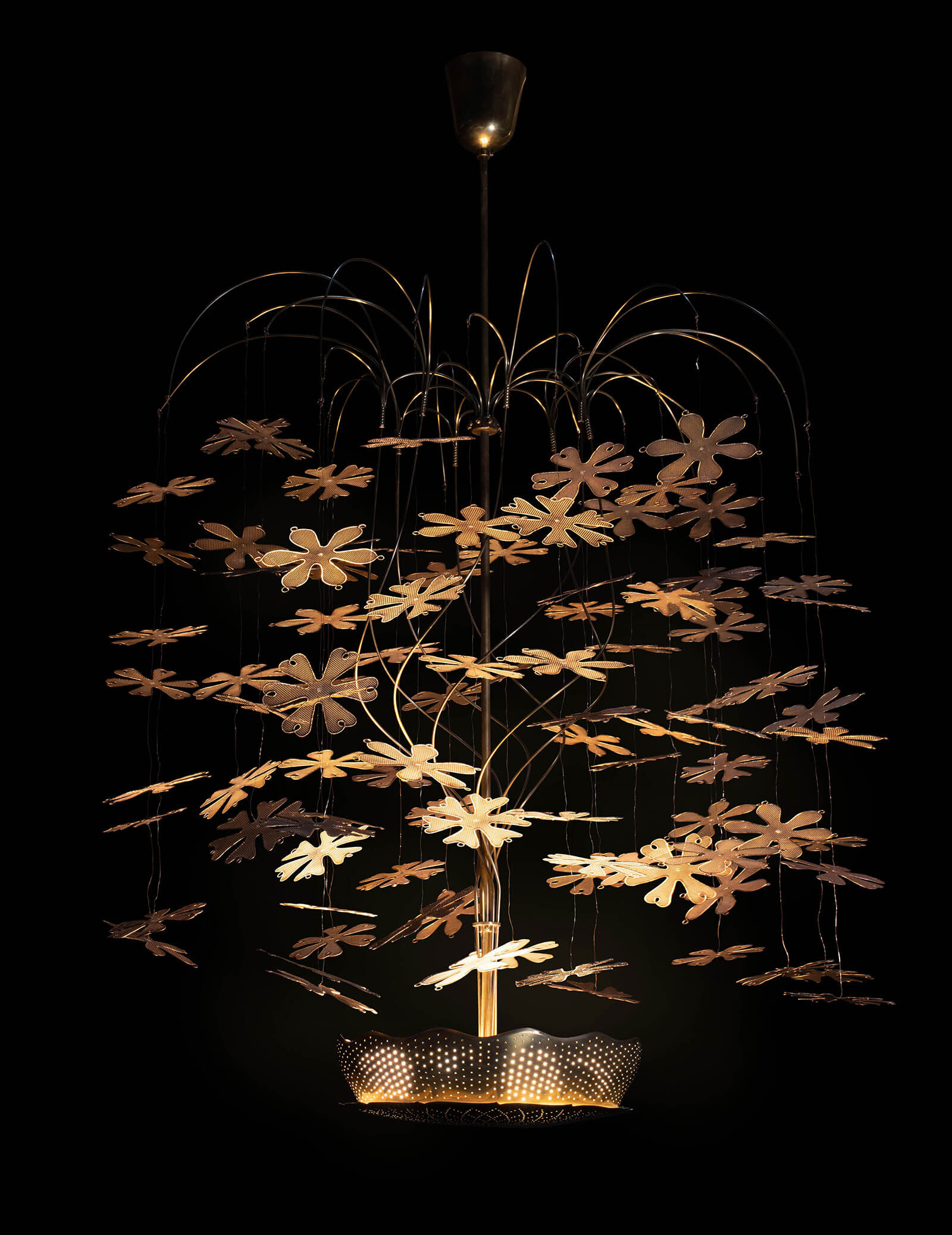 Lucie Rie, ‘Footed bowl’, circa 1978
One of ten ceramics by Lucie Rie sold by Phillips New York last summer, most for comfortably above their estimates, this distinctive bowl, just 14cm wide and made circa 1978 (with an unusual matt brown terracotta glaze with bands of red manganese delineated in pale turquoise and inscribed with vertical lines that reveal the white porcelain beneath), was not expected to be the standout. The bidders felt differently, and such was the excitement it inspired, it went for $225,000 (est $25,000 – $35,000), a new record for the German-born British studio ceramicist.
Phillips Design, New York, 29th July, Lot 83 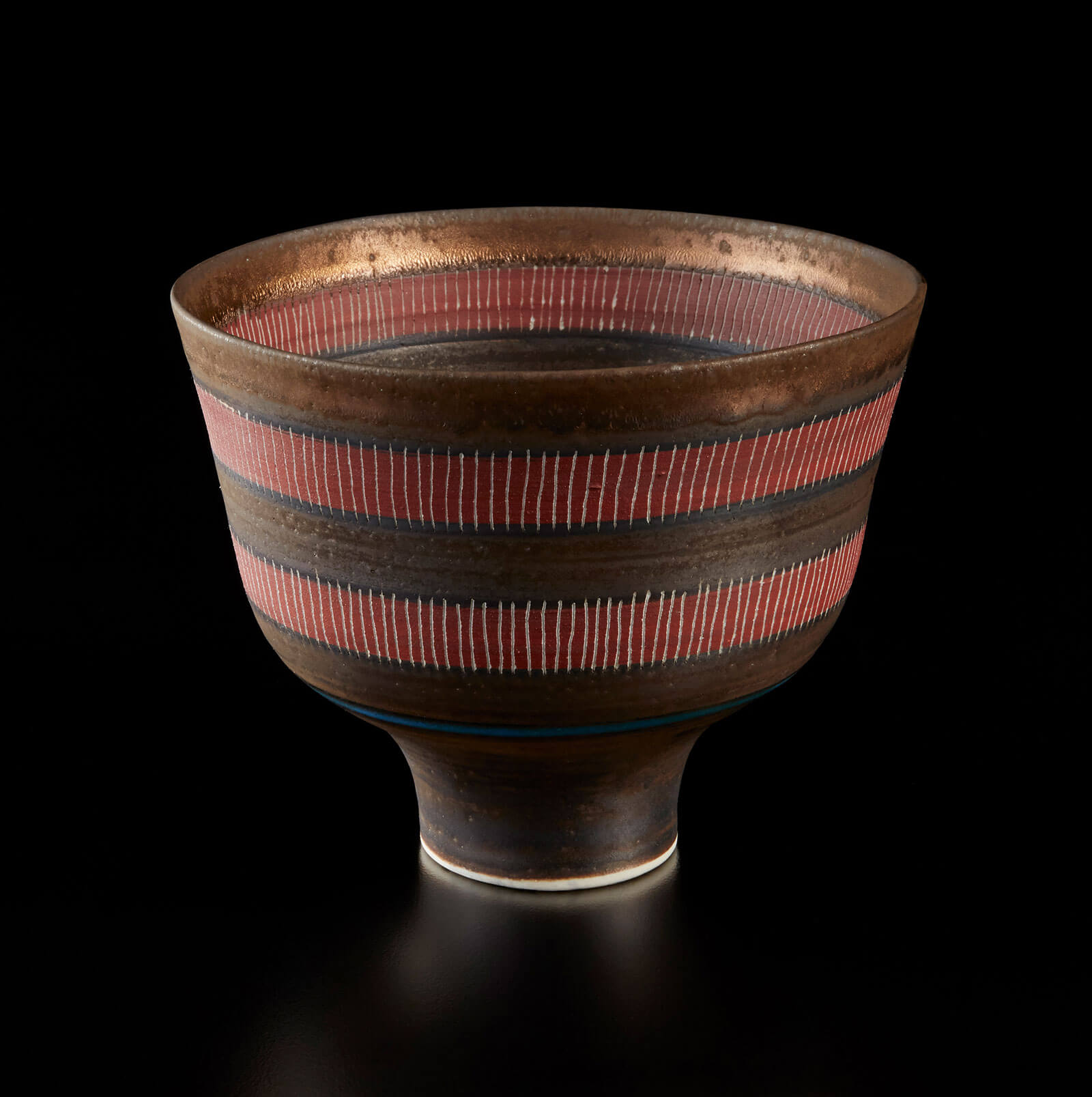 Fernando Campana & Humberto Campana and Kaws, ‘Companion’ chair (brown), 2019
London, Paris and New York may be the centres of the market for design, but there is increasing demand in Asia. Witness the HKD 650,000 (US $84,000) realised in Hong Kong this month by this collaboration between the Campana brothers and the artist KAWS, an armchair “upholstered” in soft toys, their eyes defined by his signature Xs.
Christie’s Modern and Contemporary Art afternoon sale, Hong Kong, 3rd December, Lot 421 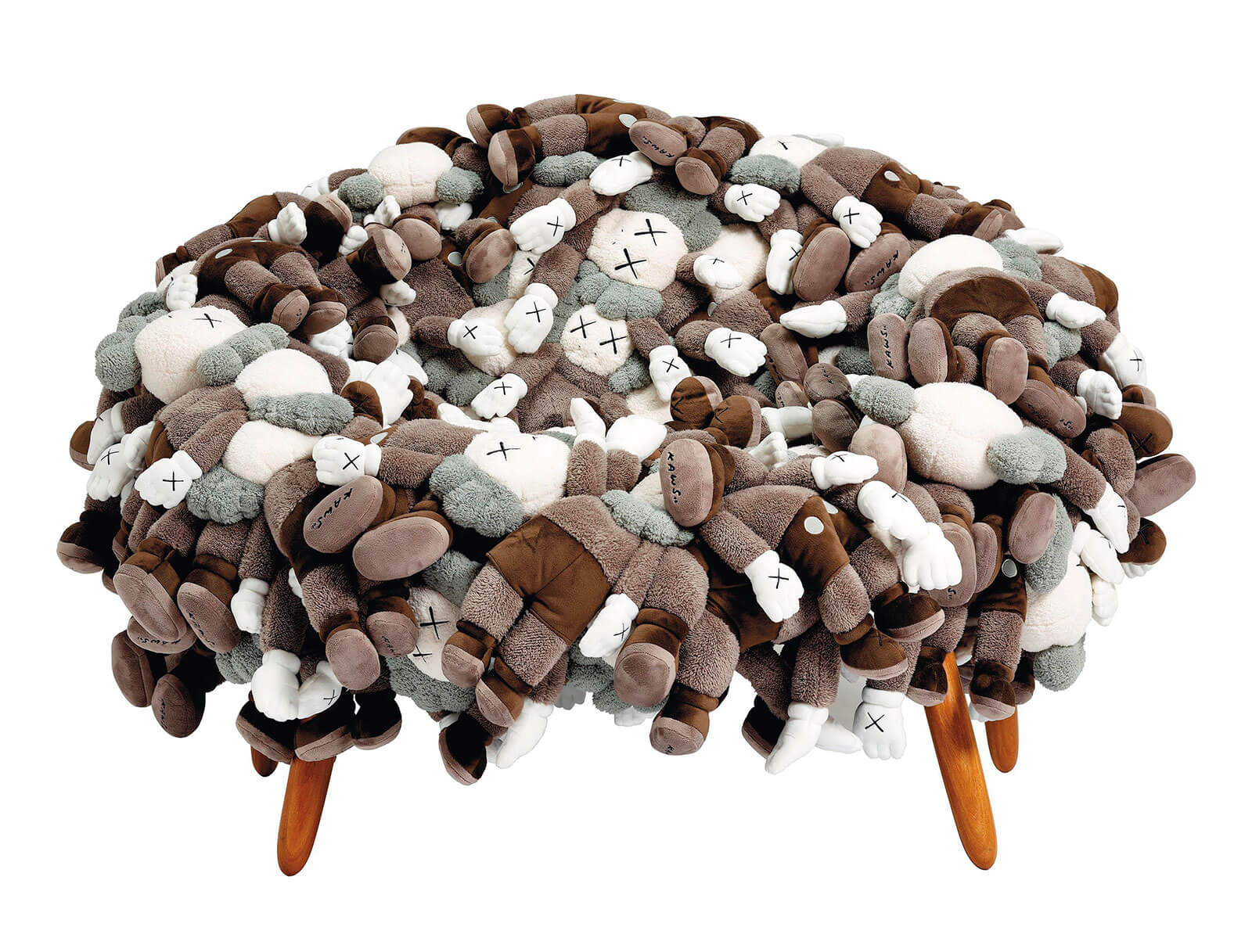 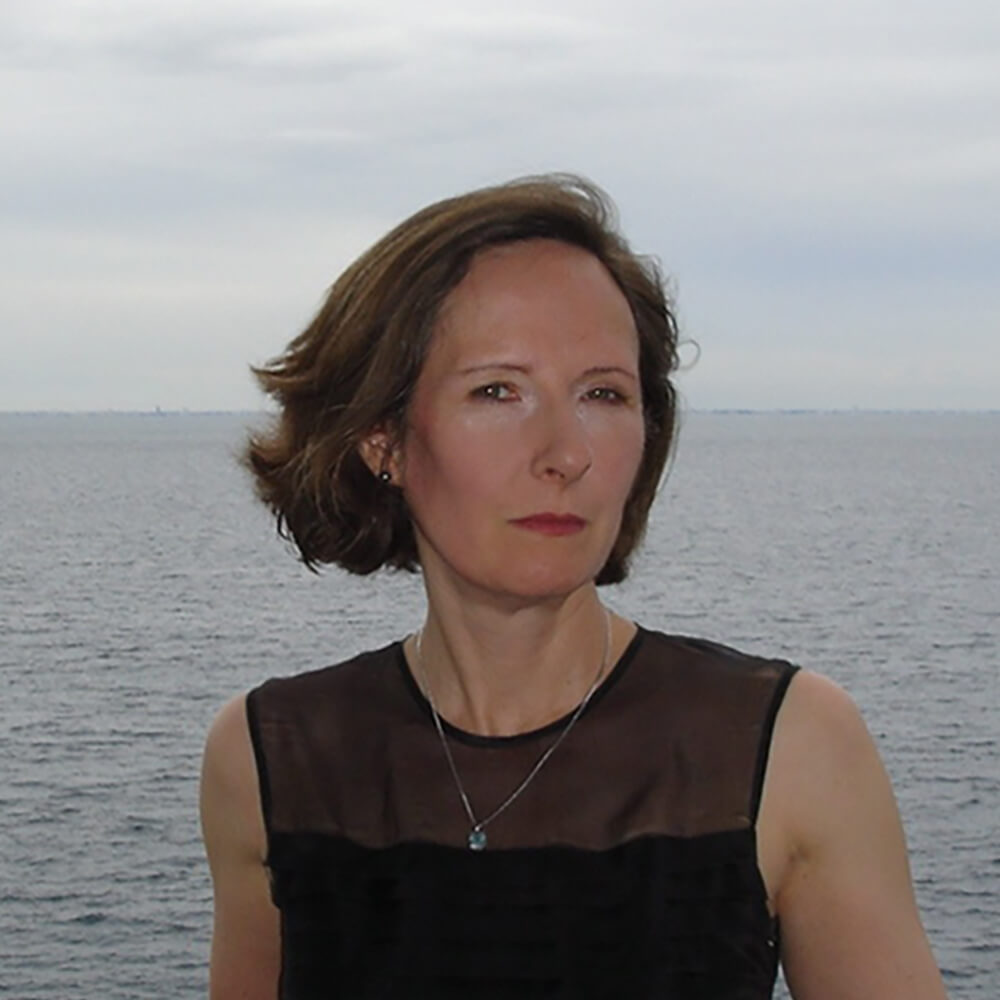 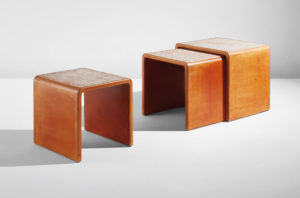 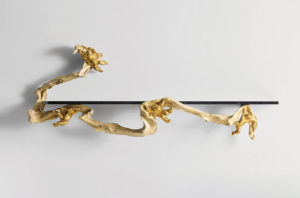 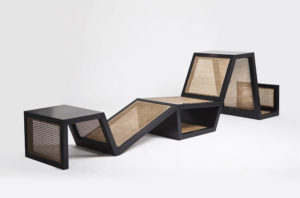