OUR AGE IS losing its sense of touch. While we live in the era of touch activated screens – deploying complex systems with our fingertips – it has turned the sense itself into an abstraction. Even the button is under threat, replaced by the sleek superiority of an uninterrupted glass screen. But as digital technology triumphs in the various areas of our lives, and the man-made world is ransacked of texture, a certain category of designers is embracing its creative possibilities. Through surfaces that trick the eye, or undo our expectations, or objects which invite a form of engagement that goes beyond looking, their work demonstrates the ways in which texture remains a powerful way to engage with the man-made world – and in doing so, gives touch a little of its magic back. Two designers leading the way are Saša Štucin and Nicholas Gardner, otherwise known as Soft Baroque, whose work – as their studio name suggests – toys with the pleasures of materiality. For a recent commission, a shop counter for the Swedish design firm Hem, the London-based duo worked with what they’ve termed ‘puffy bricks’, an in-house invention using latex balloons and jesmonite. The result, a kind of contemporary dry stone wall made up of rounded, dusky pink bricks, is a clever visual oxymoron, calling attention to the differences between soft and hard, squidgy and structural. It’s functional, hard-wearing design made eminently – and unashamedly – tactile.

Inspired by an eroded arch they spotted by the sea in Naples, the pair achieved the counter’s smooth finish by sliding the filled balloons, slathered in soap, between a glass box and a plywood carcass. With the help of gravity, each balloon slid downwards, stacking gently on top of its neighbouring counterparts, their sides squeezed flat by the formwork. “We occasionally poked one with a cardboard tube, but to be honest we didn’t want to play with them too much in case they burst,” recounts Gardner. Once the Jesmonite had set, the carcass was taken off, and the bricks individually numbered and removed. “We cleaned them up, took off the balloons, and then replaced them, one by one, with each brick fitting perfectly with the next.” The outcome is a cartoon-like structure that acts as an open invitation to the caresses of waiting shoppers. “We liked the idea of our work being experiential as possible. It’s not just a symbol to be looked at, where an image of the piece will do just as well as the piece itself.” THE PAIR ARE not alone in conjuring objects into being that long to be touched, rubbed and stroked. In studios and workshops across the spectrum of collectible design, makers and designers are producing pieces which set out to engage this teasingly elusive sense. “Touch is essential,” Spanish designer Nacho Carbonell tells me of his creations, which include a series of sculptural lamps unveiled at the 2018 edition of the Armory Show, each swathed in scrunched, lumpen metal mesh. “I want you to have the desire to reach out and touch, to understand the object through its surface. Who doesn’t love removing their shoes and placing their feet in the sand, or the feel of grass between their toes? But we are losing this sense of tactility. Everyday products – devices, computers, mobiles – are made to be practical, easy to produce and clean. But what disappears is the primitive desire to explore with our fingers.”

As Carbonell alludes, touch was once the master sense. It helped us to verify our perceptions of the world around us, imbuing experience with solidity and reliability. We pinch ourselves to know we are not dreaming. And yet despite this, modernity came to be associated with the loss of touch and texture, slowly receding in significance with each whitewashed wall and sleek silhouette. In numerous walks of life, we have come to distrust anything but the plainest of surfaces. Designed well enough, most devices we now aspire to own induce us to forget they are even there. 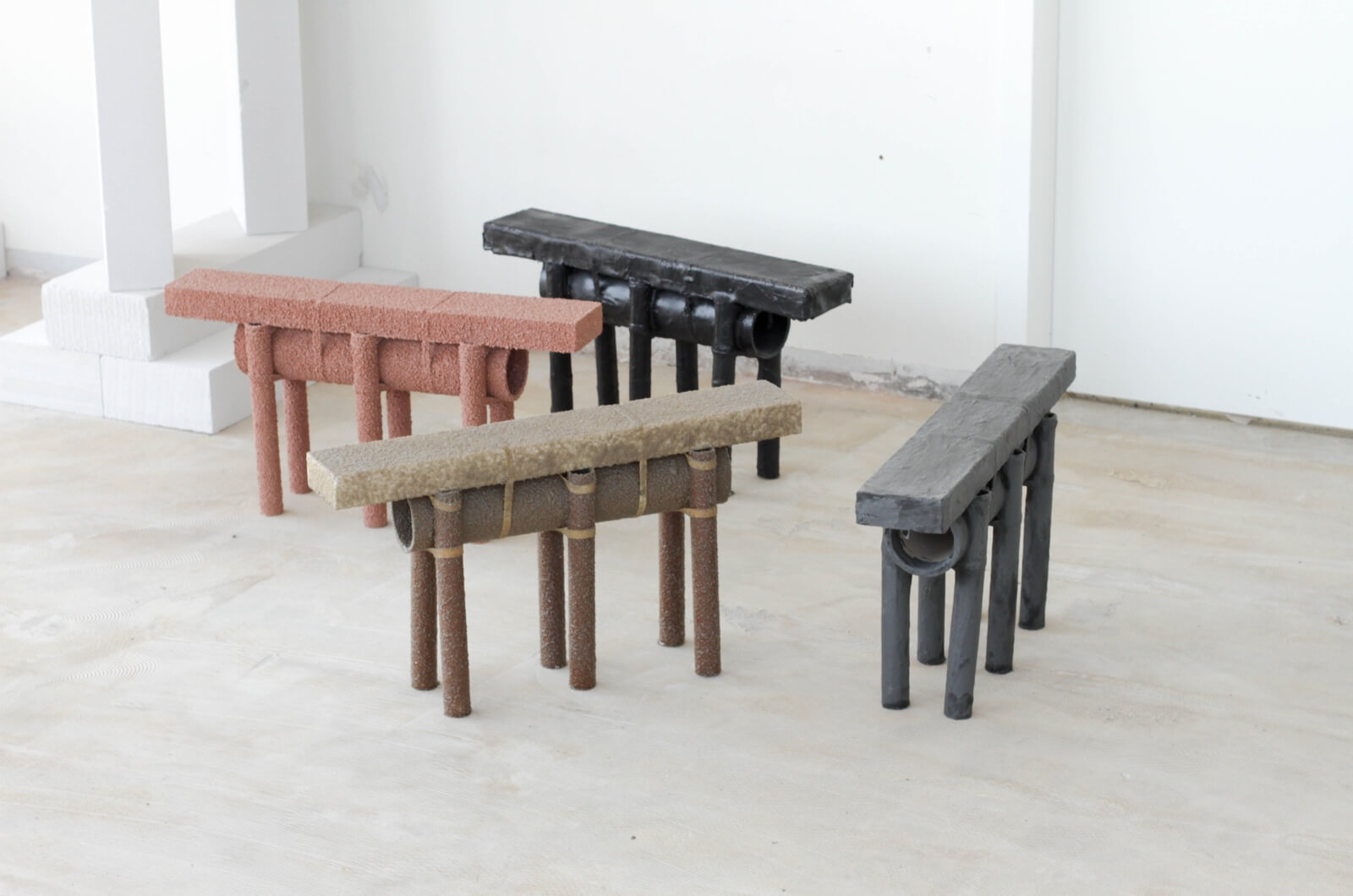 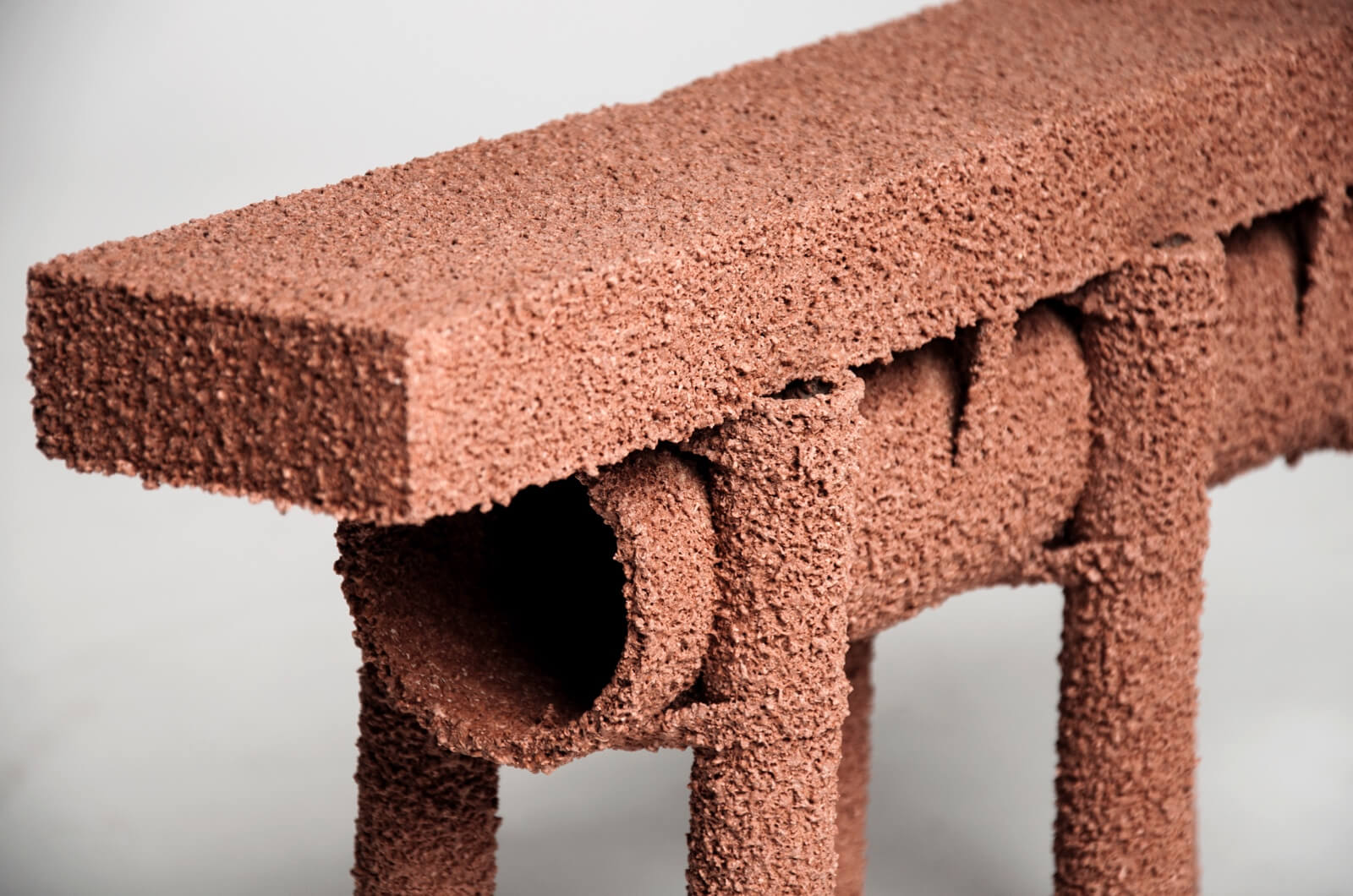 In Eindhoven, furniture designer Thomas Ballouhey prefers to flip this hierarchy, of surface and depth, on its head. In Ballouhey’s output, it’s the surfaces of things that ensure their integrity – “like an exoskeleton” as he puts it. He constructs pieces from “temporary materials” like polystyrene, cardboard, and rubber bands, to create makeshift structures, imitating the models made in industrial design. “But then,” he explains, “I skip the step where the mock-up is made into the ‘actual’ object.” First applying a layer of epoxy clay or resin, before spraying on a carefully achieved mixture of sand and glue, Ballouhey completes each piece via the addition of a textured, solidifying skin. “Essentially, I petrify them. It’s what makes them structurally sound, so until I spray on the skin, they are just an image. They need the final layer to make them real.”

And the final result gives the improbable structures an intriguing, unifying outer crust, as if they’ve been dug up from a forgotten trove, their surfaces eroded, or layered with a primeval sediment. “It’s the texture that brings people to look,” he remarks, “but it sets a distance too, making the pieces look somehow older than they are” – thereby initiating a kind of playful lurch, or double take.

And other designers are up to similar tricks, destabilising our reliance on the eye, and inviting us to investigate with our fingers. Ghent-based Bram Vanderbeke’s latest series of furniture ‘New Primitives’ uses waxes and pigments to give concrete waste the appearance of ancient stone. In London, designer Bill Amberg has teamed up with designer Tom Dixon on a range of digitally printed leathers that metamorphose the buttery hide into crumpled foil, or crinkled dichroic paper – a trompe l’oeil that turns on the special capabilities of touch, able to authenticate what we see before us. “We really like the idea of the trompe l’oeil, and things being unexpected,” says Nicholas Gardner, referencing Soft Baroque’s own eye-popping experiments in this tradition, including their ‘Surface Service’ series, where high resolution images of exotic wood and granites were printed onto silk, confusing the relationship between hand and eye. And it’s not simply a sensory game. “That sense of confusion about the surface can be a kind of mechanism to start thinking about things like how we value materials and form tastes,” Gardner explains. “What is it about certain things that makes us appreciate them, when we didn’t ten years ago?”

French designer Marlène Huissoud also employs a distinct textural aesthetic to pose questions about our designed world, though of a different kind. Harvesting resin from honeybees (she is the daughter of a beekeeper), she coats silkworm cocoons in a fine, inky black layer of the stuff, which hardens to give a glossy, lacquer-like finish. Out of this material she then builds her distinctive organic furniture. And while the evocative scent the resin exudes has captivated those who encounter her work at fairs, its visual appearance also provides a source of intrigue. “Honeybee resin is unknown to people, and it can look quite industrial in a way,” Huissoud says. “But then people also often think it’s some kind of glass or ceramic, but I don’t add anything to it to give it the appearance it has.”

Rather, Huissoud celebrates the resin in its natural state, with the introduction of the cocoons adding a further tactile element, and giving the final pieces the appearance of a bumpy carapace, as if plucked from a Tim Burton film or Aubrey Beardsley illustration. “Before studying design, my practice was drawing. I made these very repetitive, obsessional drawings. So when I started working with natural materials, texture became a way for me to communicate the project, and bring back the details of the insect’s world,” Huissoud elucidates. “My first vases were blown honeybee resin, and I used a lot of small tools to engrave them.” She introduced the cocoons as she scaled up, allowing her to make bigger pieces and the precious resin to go further. But her new surface matter also introduced strength: “Honeybee resin is one of the most resistant natural materials – the Egyptians even used it to mummify their dead – but like a wax, it can melt in sunlight. With the cocoon fibres however, that can no longer happen.” 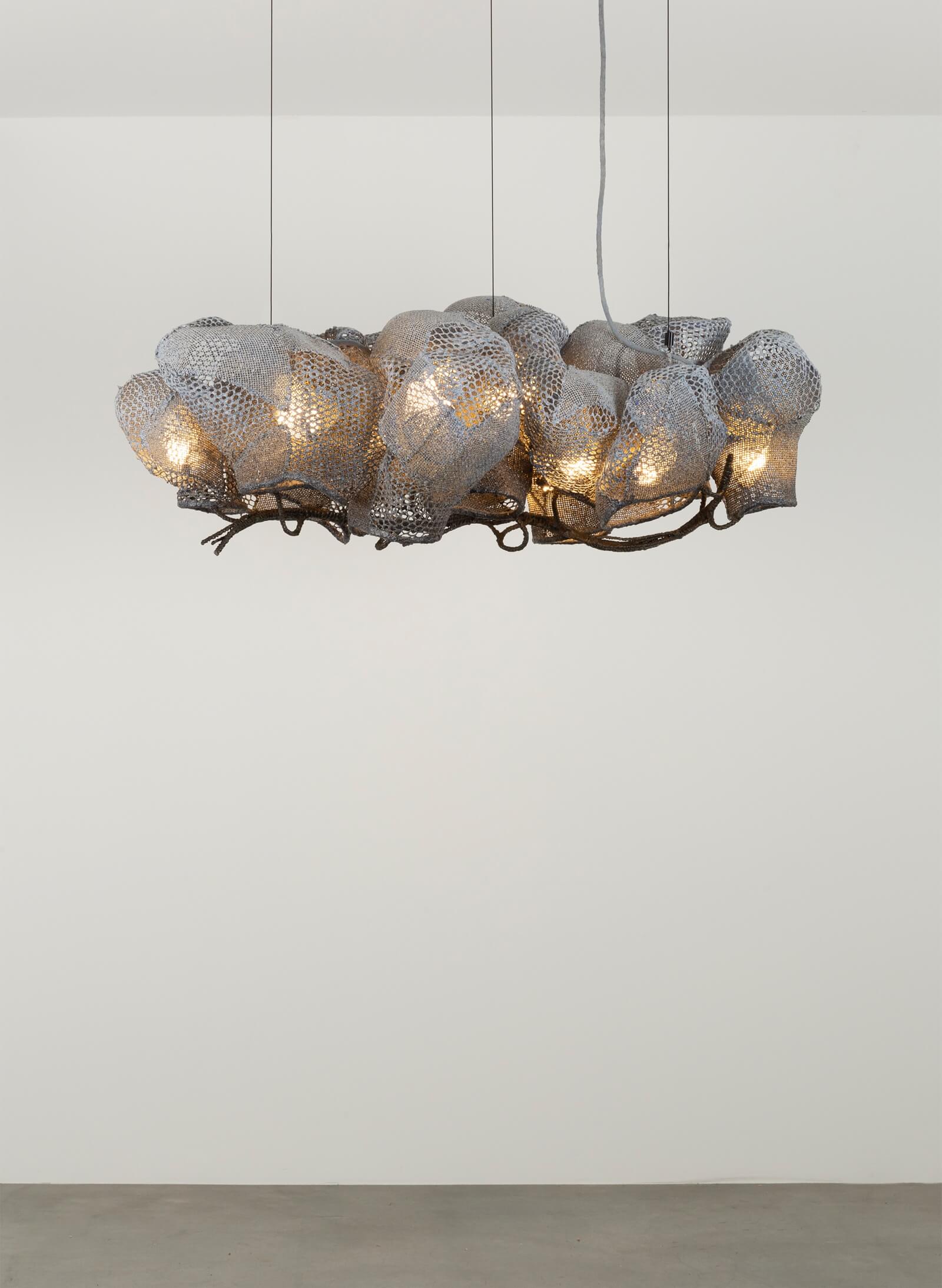 “I want you to have the desire to reach out and touch, to understand the object through its surface” 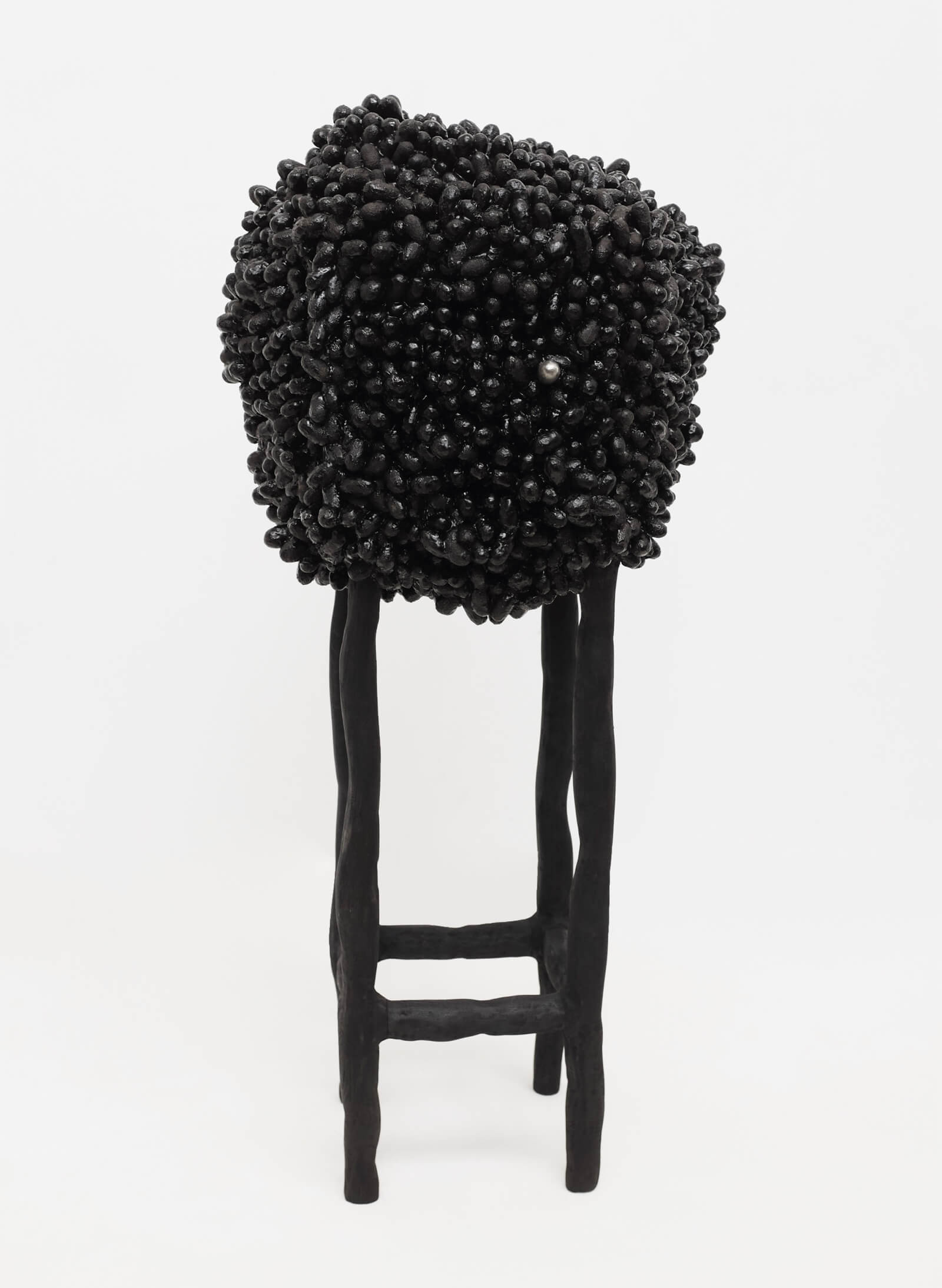 “I want people to appreciate the environment, and the beauty in nature, to open up possibilities for people about what we can make and consume”

What is striking as you examine one of Huissoud’s cabinets is the painstaking nature of the assembly process, using bio-glue to join one cocoon to the next. Each piece’s skin also dictates its structure. “I let myself be guided by the cocoons’ shape, so every piece is unique. There’s no wooden armature beneath, and I only ever make quick sketches before,” she explains. Working in this way gives the final outcome an integrity which Huissoud guards closely, refusing, for instance, to seal any piece with varnish or introduce dyes.

“It’s important to me that each work I make is a kind of statement, and that it says something about what I’m against. Whenever I go to [the Salone in] Milan, it’s just too much for me, to see so much production. We don’t need it all. We need strong messages instead.” For Huissoud, the intricate exteriors of her work provides this, “I want people to appreciate the environment, and the beauty in nature, to open up possibilities for people about what we can make and consume.” IN THESE TACTILE objects – that need to be felt to be fully believed – each designer goes a little way to reversing the tide that has relegated our sense of touch. Surfaces can pull us in deeper, becoming a site not just for spectacle, but for a private communion between the user and designer. “Sometimes an experience is stronger if it’s about more than just stepping back and looking,” Carbonell muses. “Touching is like talking. If you don’t talk, you forget how to talk. If you don’t touch, you forget how things feel, so when I’m using materials, I’m thinking a lot about this idea of memory. To fully understand the object, you need to be there to experience it. Your fingertips can read an object, and make it more complete.”