A DECADE OR or so ago, it seemed that craft and design were like water and oil when it came to how happily they mixed. In simple terms, craft offered attributes such as warmth, individualism and the characterful fallibility of the human hand; design was often interpreted as cold, uniform and technologically flawless, However, designers operating in the arena of collectible design increasingly explore what craft processes can bring to their work, recognising the value of the authentic and the artisan in relation to the unique and limited-edition. 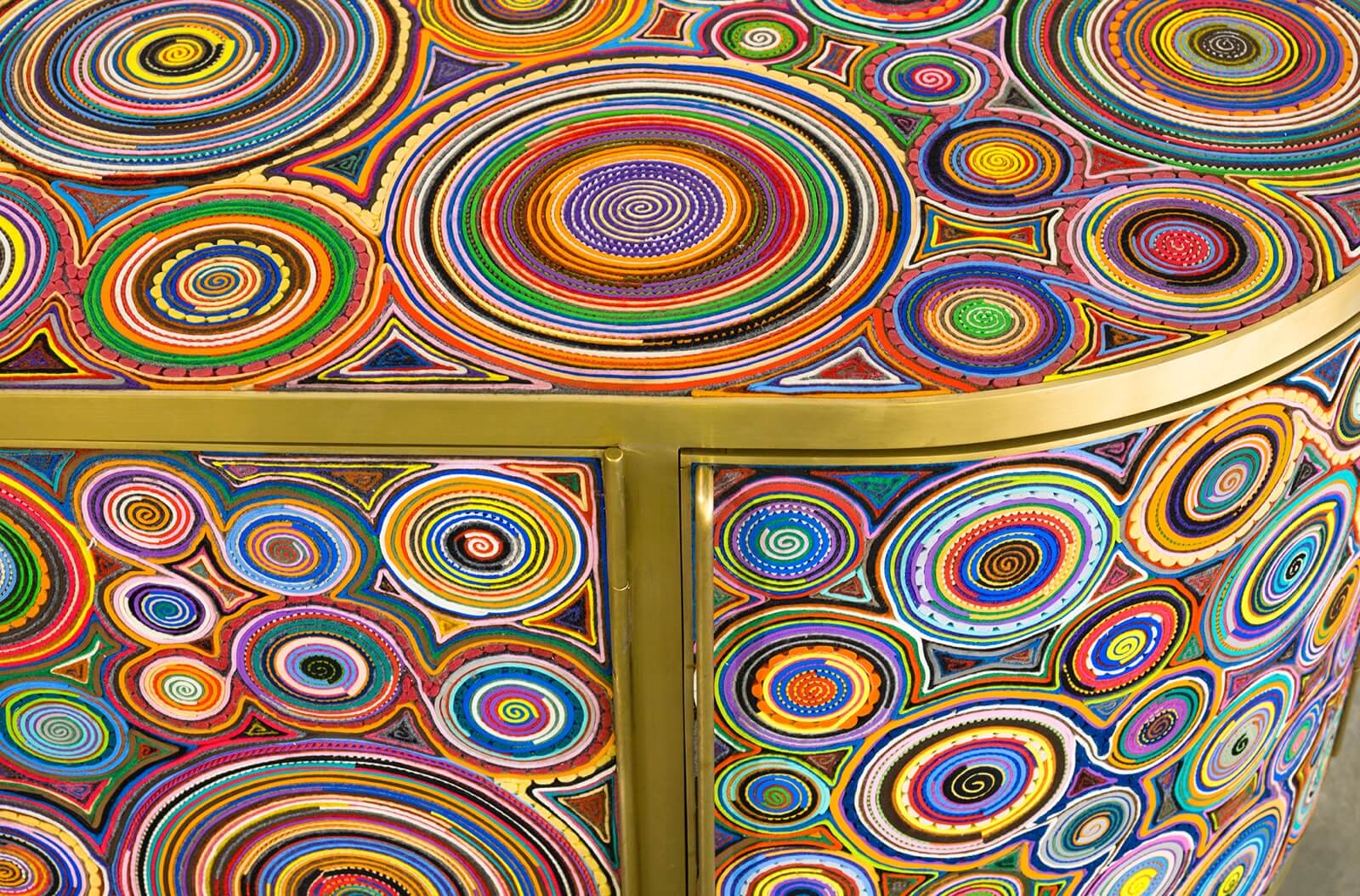 The Campana brothers made this dialogue with craft a signature of their work from the foundation of their studio in Sao Paulo thirty years ago. Today their studio employs about a dozen full-time craftspeople including weavers, welders and embroiderers. Humberto Campana says the need to connect mind and hand was integral to their work from the beginning, “We artists want to break free and tear down walls, and that means looking at your own discipline through other eyes. From the working of the hands, things arrive in the mind. It allows us to look at materials in a different way. What is this material? What could it be? What are its limits? To us, a material is like a character waiting for an author.” Their recent exhibition, ‘Hybridism’, at Carpenters Workshop Gallery was a case in point. This exhibition demonstrates and celebrates the brothers’ multidisciplinary approach, including the importance they place on collaborating with artisans within regions of Brazil and across the world. “We called the show ‘Hybridism’ because of the idea that what we do is not focused on one discipline, but relies on collaboration and integration”, he says, “It is about looking outwards, not inwards.”

Designer Alex Hull, who is represented by Gallery Fumi, recognises that without the input of skilled craftspeople, his work would not exist in the form it does, “The upholstery hand techniques used in a collection such as the ‘Split Armchair’ for example, enhance the piece by giving it soul. In ‘Blaze Cabinet’, we used traditional marquetry techniques to create a transition between wood and brass. I like the fact that even in an edition, every piece will be slightly different and carry the hand of the maker.” He also appreciates the additional layer of creativity it provides, “The intersection between technology and hand craftsmanship is where new ideas and innovation happen, so I view it is an essential part of the palette in which I work.” Co-founder of Fumi, Sam Pratt, agrees, “Our designers are known for making most of their work by hand, creating unique and unusual pieces that will stand the test of time. When we talk to collectors about how something is made with dedication, time and effort, it really adds to their appreciation and interest in a piece. After all, they have come into this world of collectible design to find something very special.” 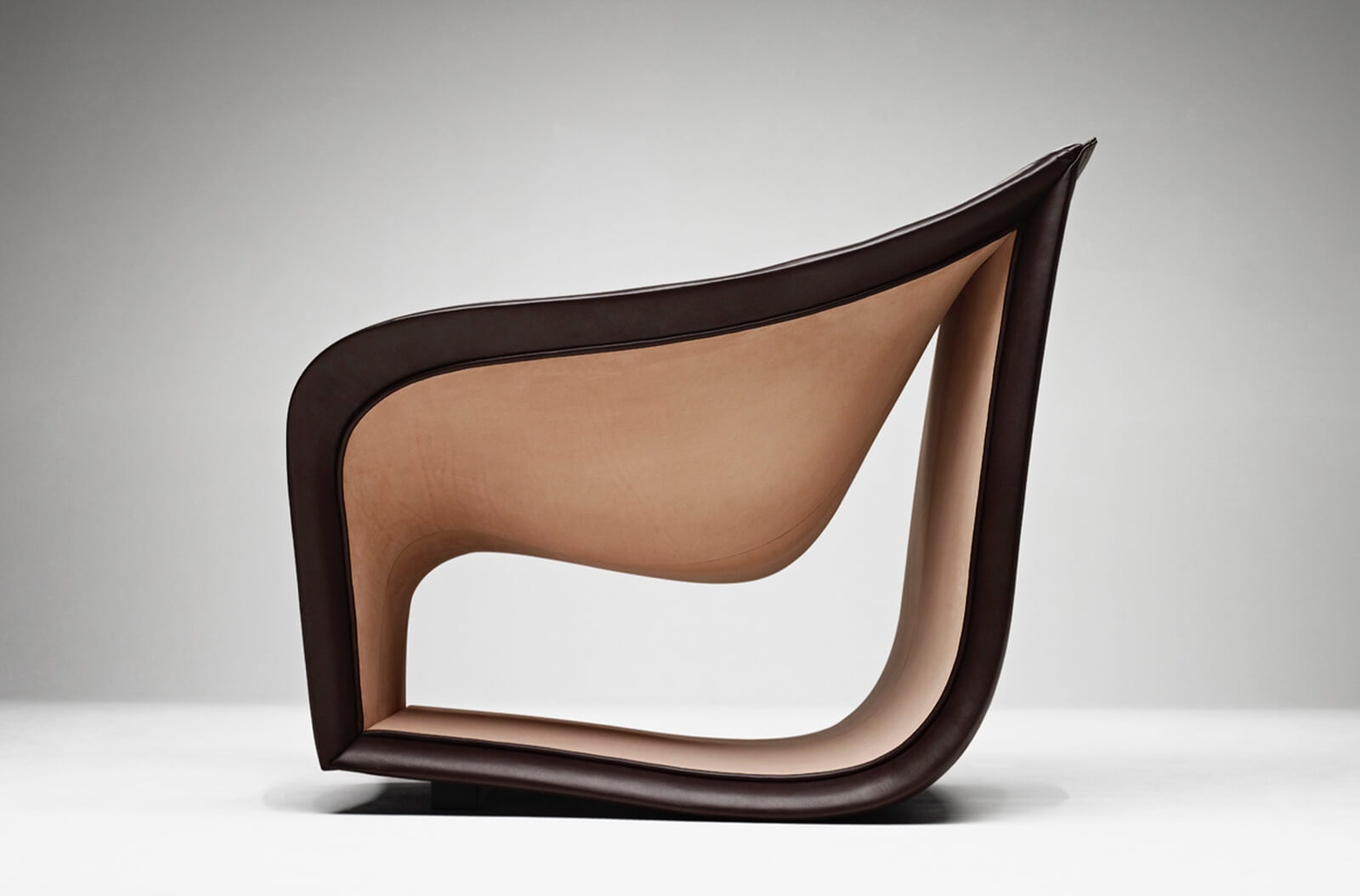 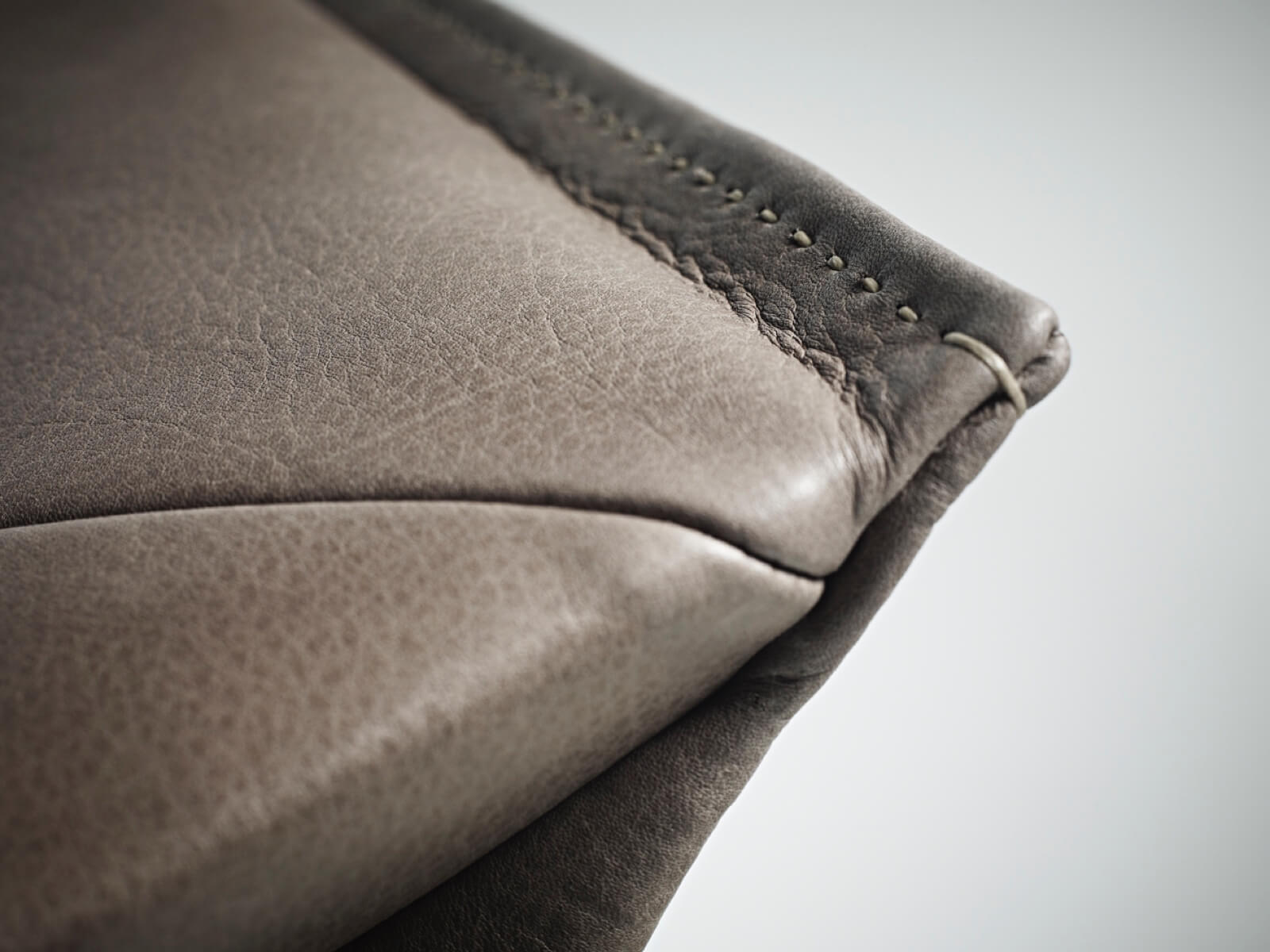 New York gallerist, Cristina Grajales, agrees, citing the work of the Mexican designer, Gloria Cortina, and the French designer, Christophe Côme  as examples of excellence, “When I first saw the ‘Black Hawk Console’ and the ‘Bullet Cabinet’ by Gloria, I was so intrigued by the use of lacquer with bronze, because lacquer first entered the Americas via Mexico in the 18th century – a fascinating link to our history. 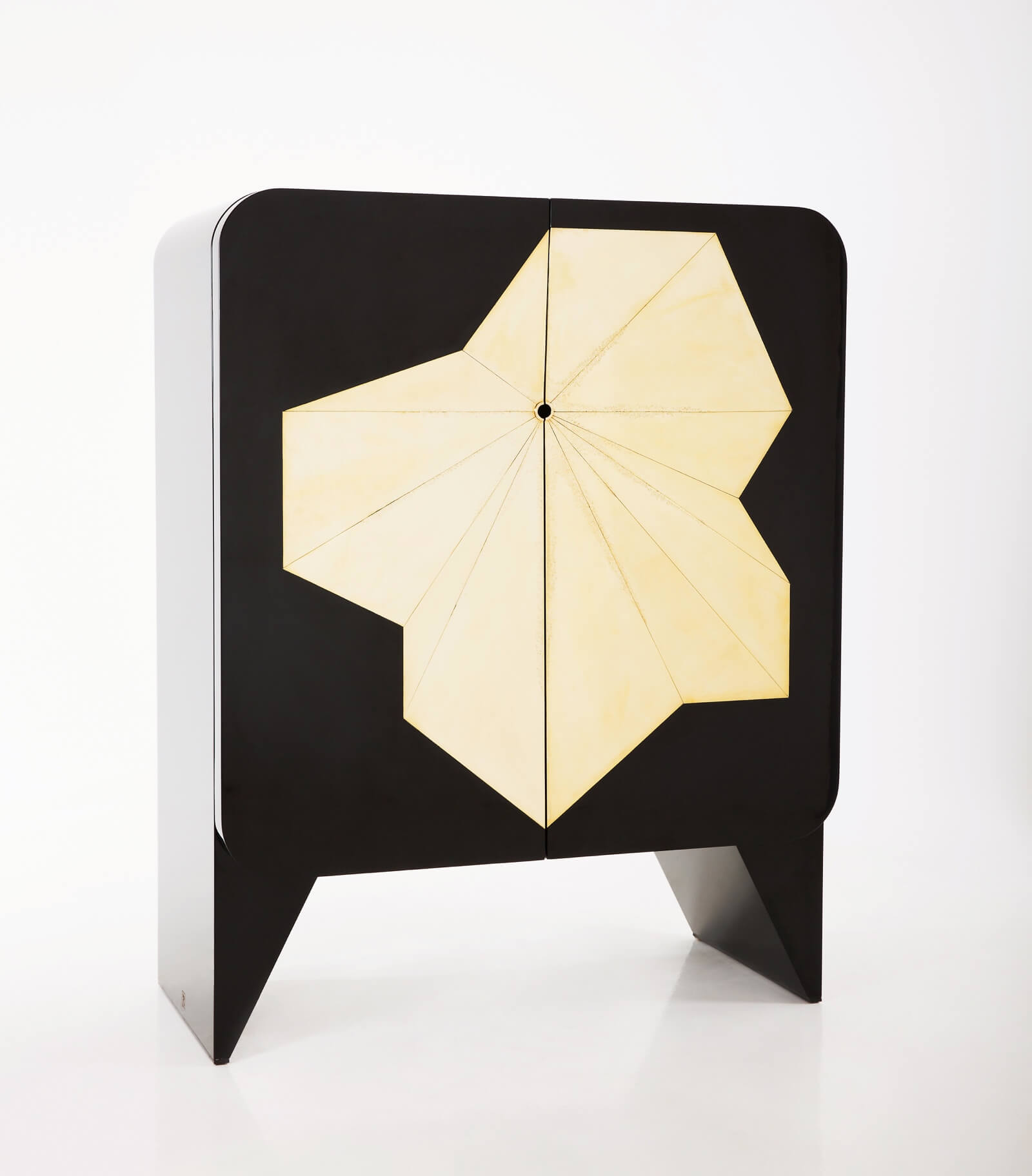 In Christophe’s case, when you look at a piece such as the ‘Honey Silver Cabinet’, there is a beautiful juxtaposition between the metal and the gold lustre of the glass. What makes this glasswork even more special is the fact that Christophe learned very old family recipes for glazes from his uncle, who was a master ceramicist. He is continuing with something that has been in his family for generations, but using that skill to produce contemporary, collectible pieces such as the ‘Yellow Lava Cabinet’.” Cristina agrees that the hand quality of such work is an important part of their appeal to collectors, “Unfortunately, many ateliers have now disappeared, so it makes work such as this even more treasured. When you look at these pieces, you see the hand, the heart and the soul of the maker.” 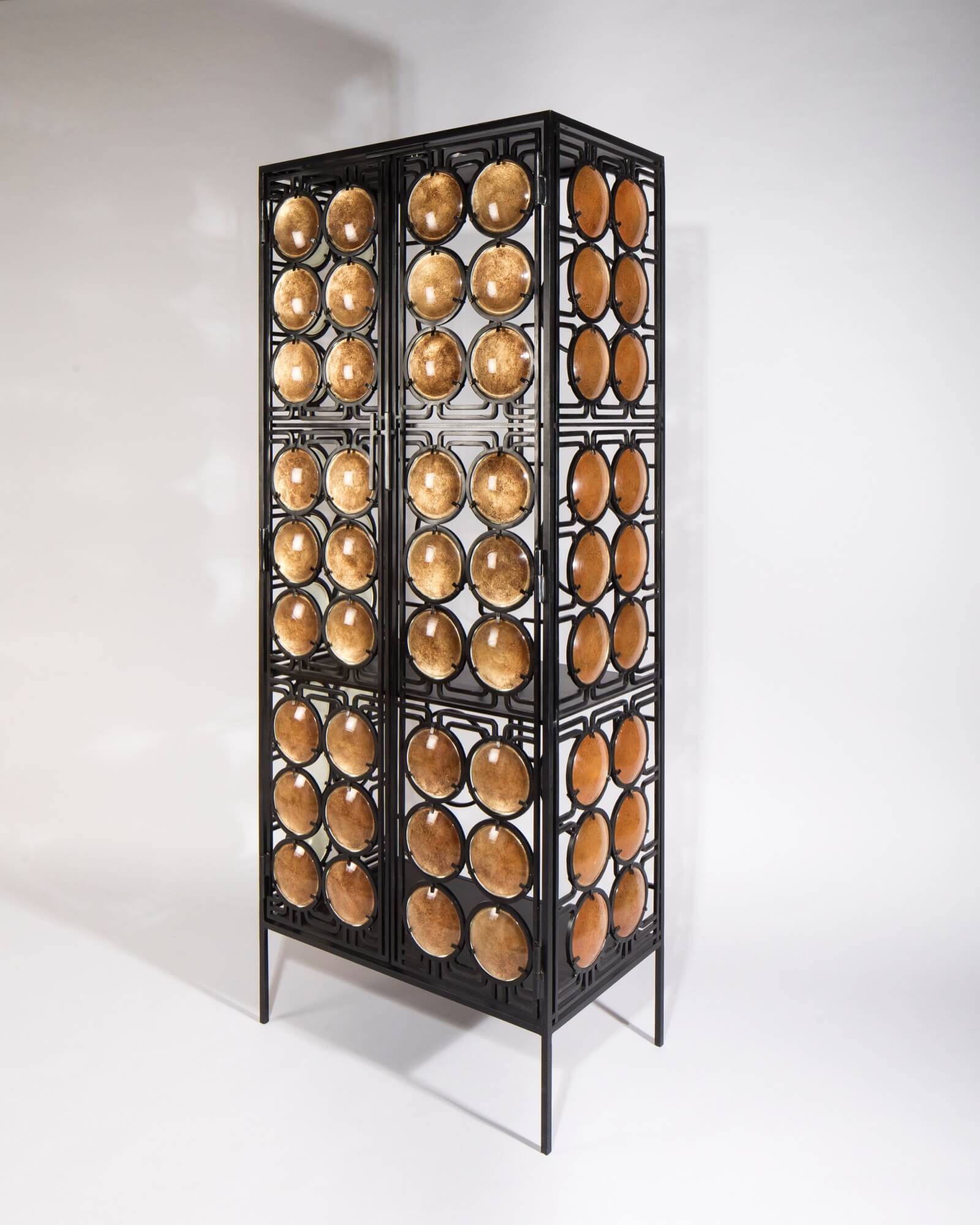 DEBORAH MOSS, CO-FOUNDER and Creative Director of Toronto-based Moss & Lam, leads the artistic vision for this custom art studio, drawing on a broad range of cultures and materials. The studio – comprised of 25 artists, designers, craftspeople and technicians – blurs the lines between art and design to create artworks that expand the capabilities of traditional techniques and materials. “Craftsmanship is what we do,” she says, “I am very mindful of the knowledge and skill set within my studio and find great satisfaction in being a part of that continuum of artisanal traditions. We respond to the past while looking forwards.” Moss & Lam recently produced a series of hand-cast tables called ‘Playtime’, using the ancient tradition of scagliola, a process Moss first became aware of when studying art history at university, “I was attracted by the idea of making something out of nothing – just plaster, pigment and binders. There is a sense of alchemy within this technique.” As she explains, the recipe for scagliola is unique to each practitioner, “While the form of the table is repeatable, the patterning of the scagliola will always be different. For many collectors, there is a deep appreciation of possessing a one-of-a-kind as opposed to one of multiples.” 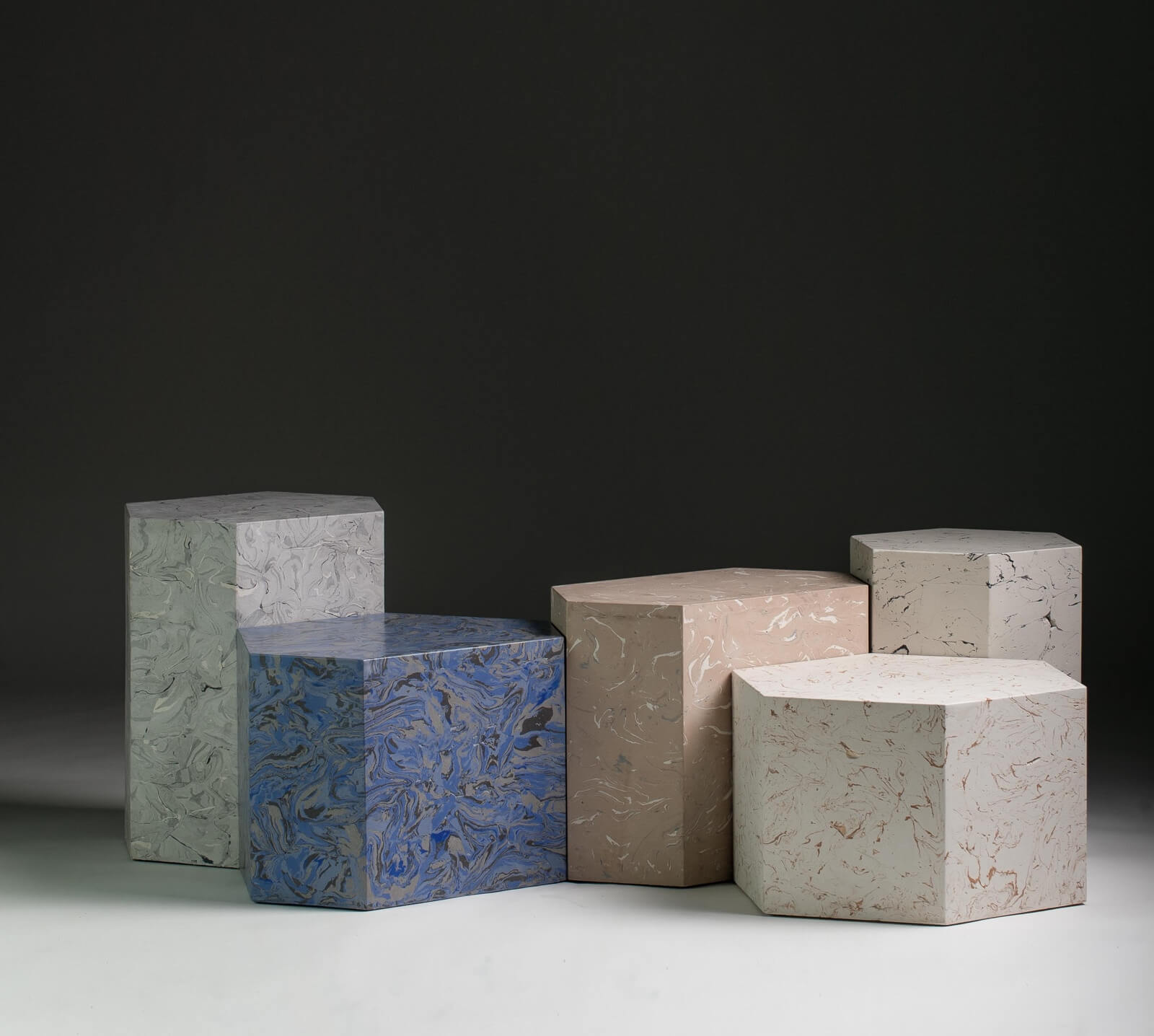 At Galerie Kreo in London, Spanish designer Jaime Hayon recently showed ‘ChromaticO’, a new collection featuring hand-blown Murano glass with African tribal inspiration. The contrast between the fragility of glass and the strength of African symbolism and bold colours is powerful and exuberant. At the same time, the Paris gallery showed a range of marquetry-marble tables made by Hayon in collaboration with ateliers in Vicenza and Verona, featuring the soft lines, curves and pared-down geometrics that are part of the designer’s iconography. 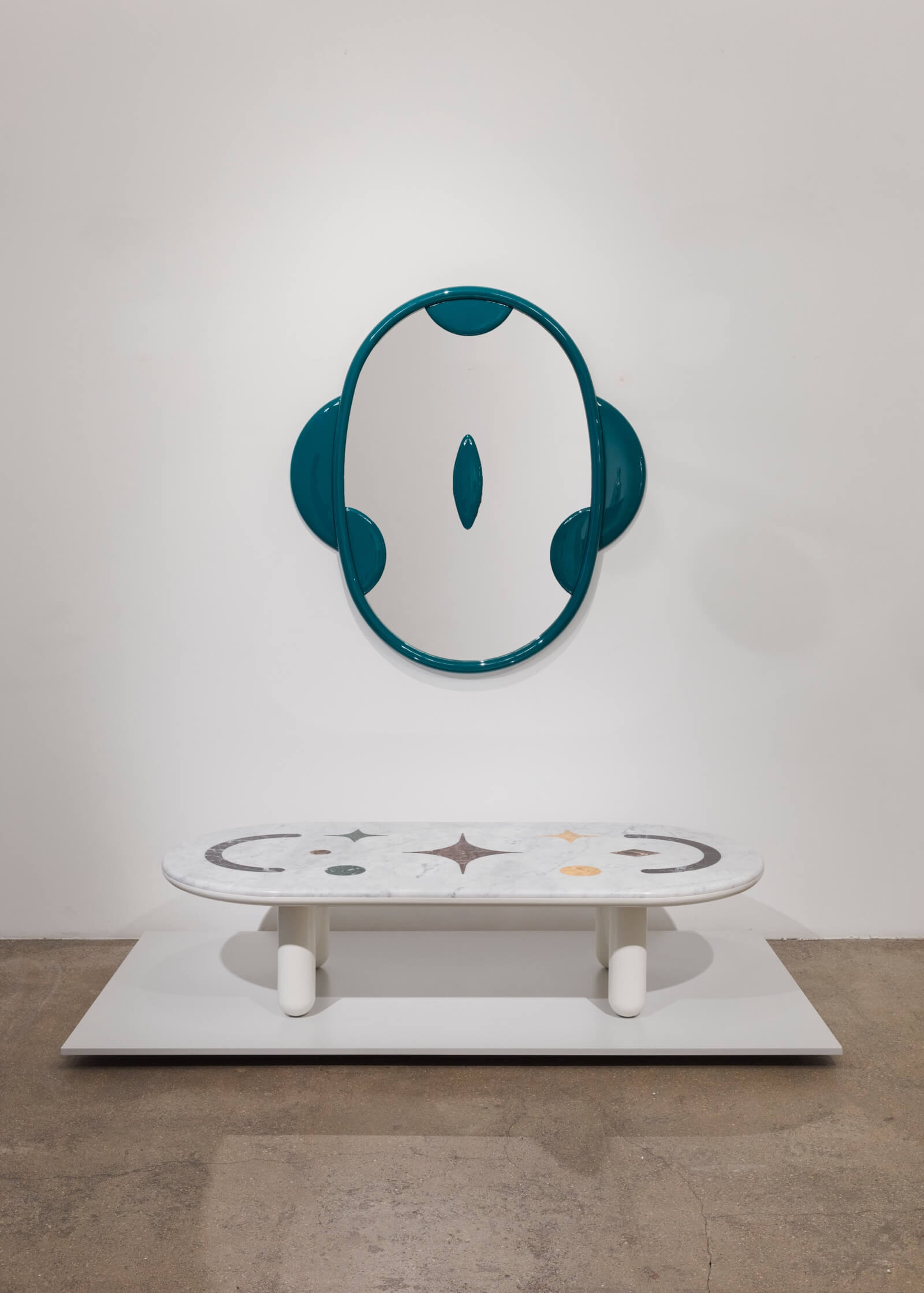 Earlier this year, Marc Newson showed his first limited-edition collection in more than a decade at Gagosian in New York. Revisiting his roots as a jeweller and silversmith, he explored rare decorative techniques on a typically unconventional large scale. Like Hayon, he chose to explore glass – in this case, cast-glass chairs made in the Czech Republic. These continuous symmetrical forms are comprised of two hollow quarter-spheres, one bold in colour resting on one that is clear. He also fused glass rods to create a series of streamlined desks, tables and consoles. Elsewhere he employed Chinese cloisonné, an ancient enamelling technique from the 13th or 14th century, to produce Chinese motifs (such as cherry blossom branches set against black enamel) to ornament a series of desks, chairs and lounges.

Italian architect and designer, Achille Salvagni, uses the centuries-old workshops of his native Rome to realise his collections. ‘Circeo’, for example, features hand-carved walnut covered with goat-skin parchment panels, the latter produced by the same atelier that made all of Gio Ponti’s parchment work in the 1930s and ’40s. ‘Circeo’ is ornamented with 24ct gold-plated, bronze hinges made by the ancient foundry responsible in part for the upkeep of the Vatican. 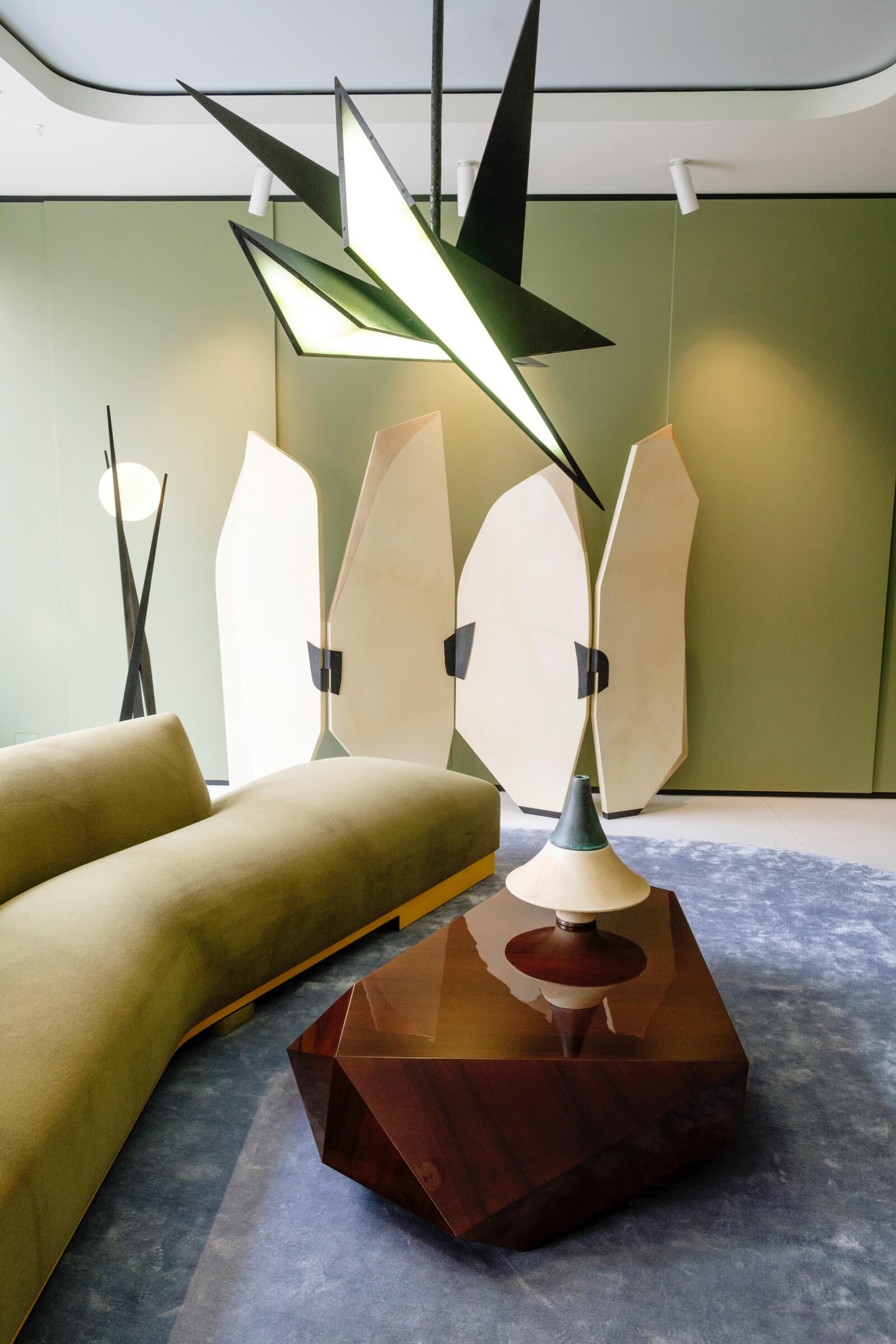 For ‘Nerone’, Salvagni once more employed the wood carvers, parchment makers and foundry, but with the additional skills of a stone mason, glass maker and lacquer expert. It is an almost medieval approach, with each piece journeying from one specialist workshop to the next, as James Malcolm-Green of the London flagship gallery explains, “By combining all of these artisanal skills, we create truly exceptional works that can be appreciated for generations to come – legacy objects within personal collections. Through the act of investing in these pieces, collectors become patrons of craft skills that are at risk of dying out, protecting the livelihoods of individual artisans and respecting the heritage of materials.” Malcolm Green recognises that many of these techniques could be applied quicker and more accurately by machine, but this would be to miss the point, “A machine can’t ‘read’ the material in the same way an experienced craftsperson can. That intuition is what gives our works the majestic quality that would be lost if outsourced to a production facility in a factory.” 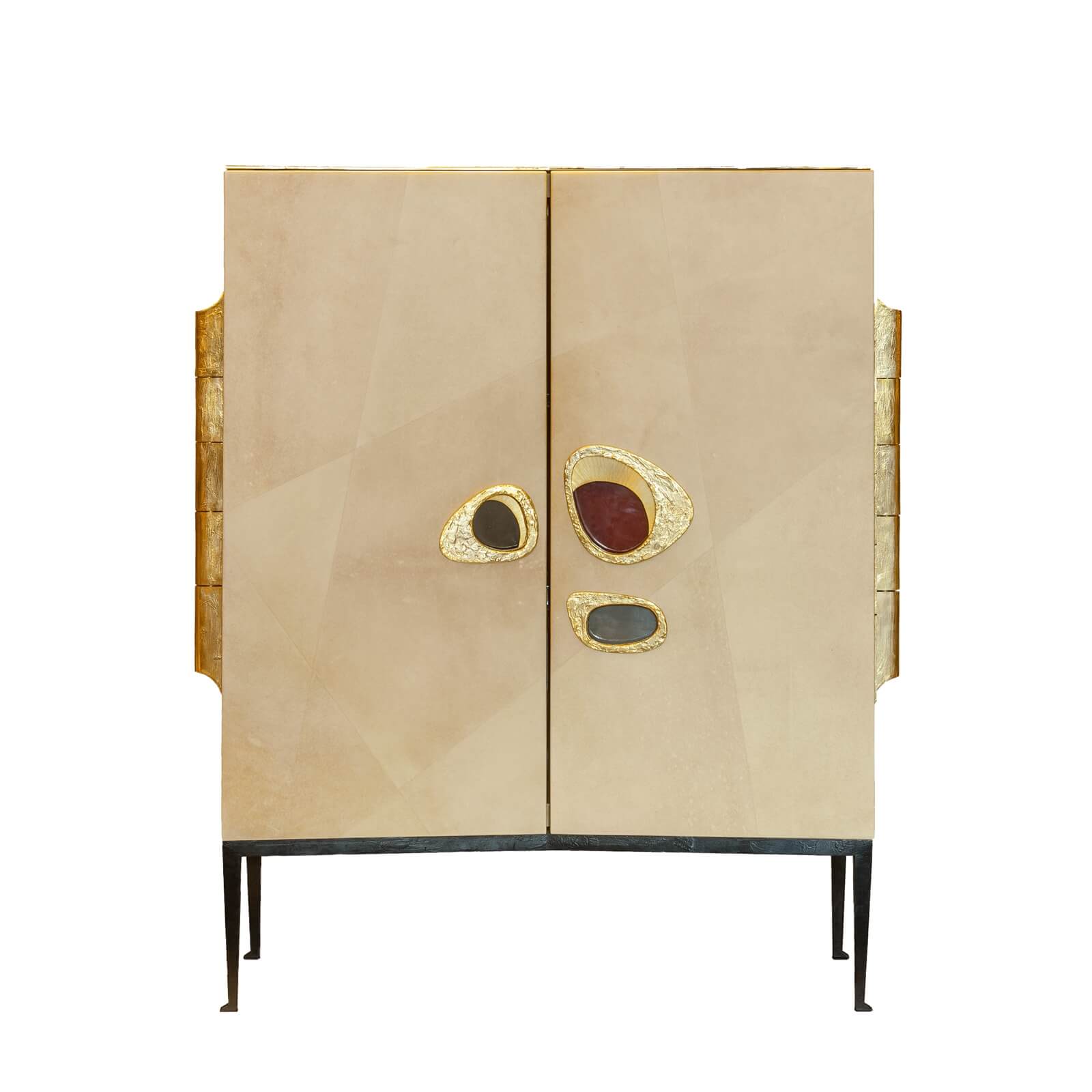 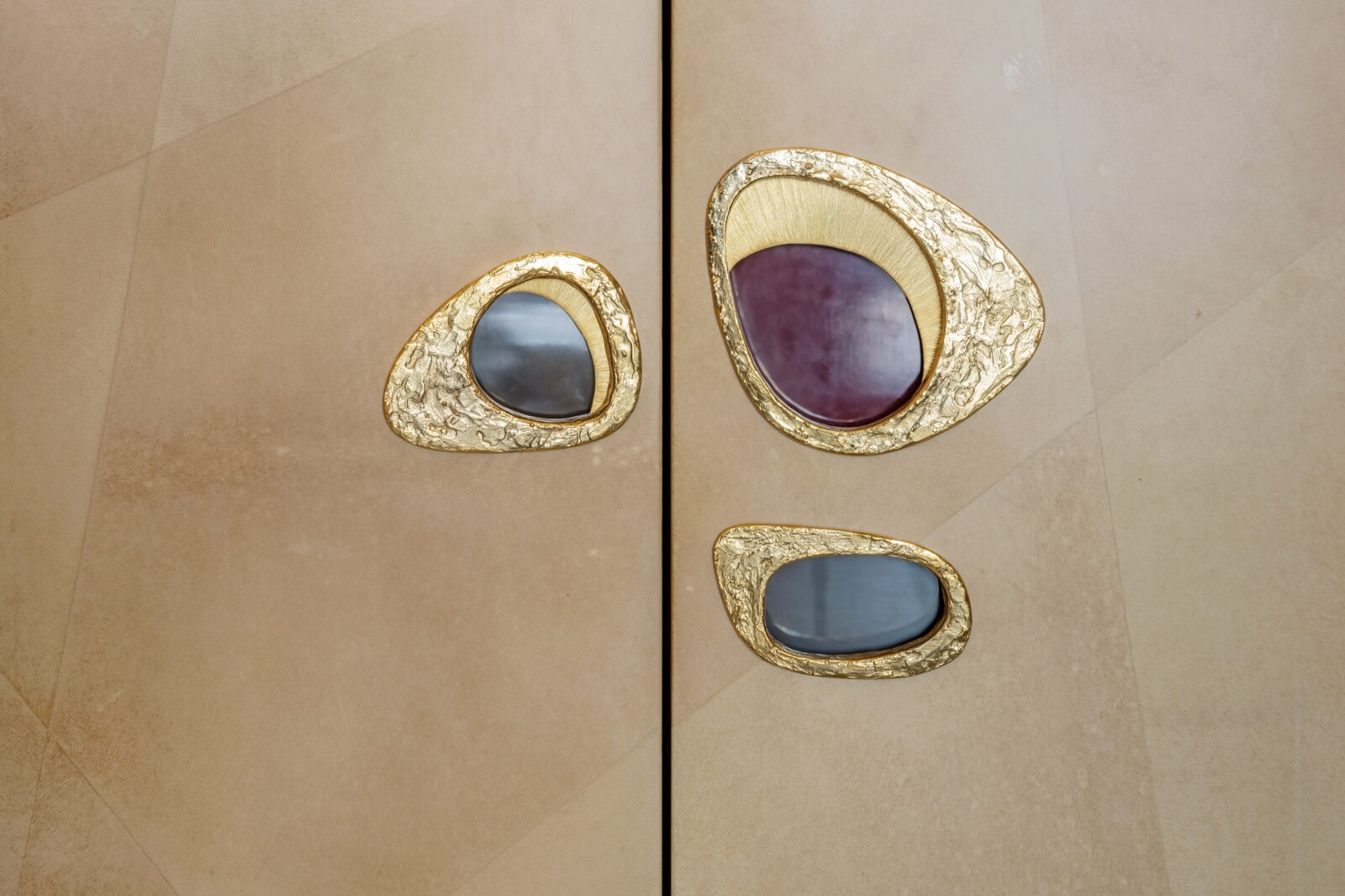 IN 2015, CARPENTERS Workshop Gallery opened its own workshop facility just outside of Paris, which currently offers designers the opportunity to work with a range of skills including specialists in metalwork, leather, parchment, wood, stone, textiles, upholstery and embroidery. It also has its own bronze foundry. As co-founder, Loic Le Gaillard, explains, “An artist can go there and brainstorm with artisans, experiencing different materials and different techniques within that one setting. It encourages a dialogue that creates very exceptional pieces of work.”

Those that have benefited from this set-up include Ingrid Donat, “There may be four or five specialist trades involved with making just one of her pieces, but she is there with them fine-tuning the visual effect she is striving to create. It is a return to the way the Old Masters worked, where what the artist conceived in his brain did not necessarily mean that every stroke of the brush was made by him. Sebastian Brajkovic is another example, where we worked with the legendary Maison Lesage to create the embroidery so integral to his work.” 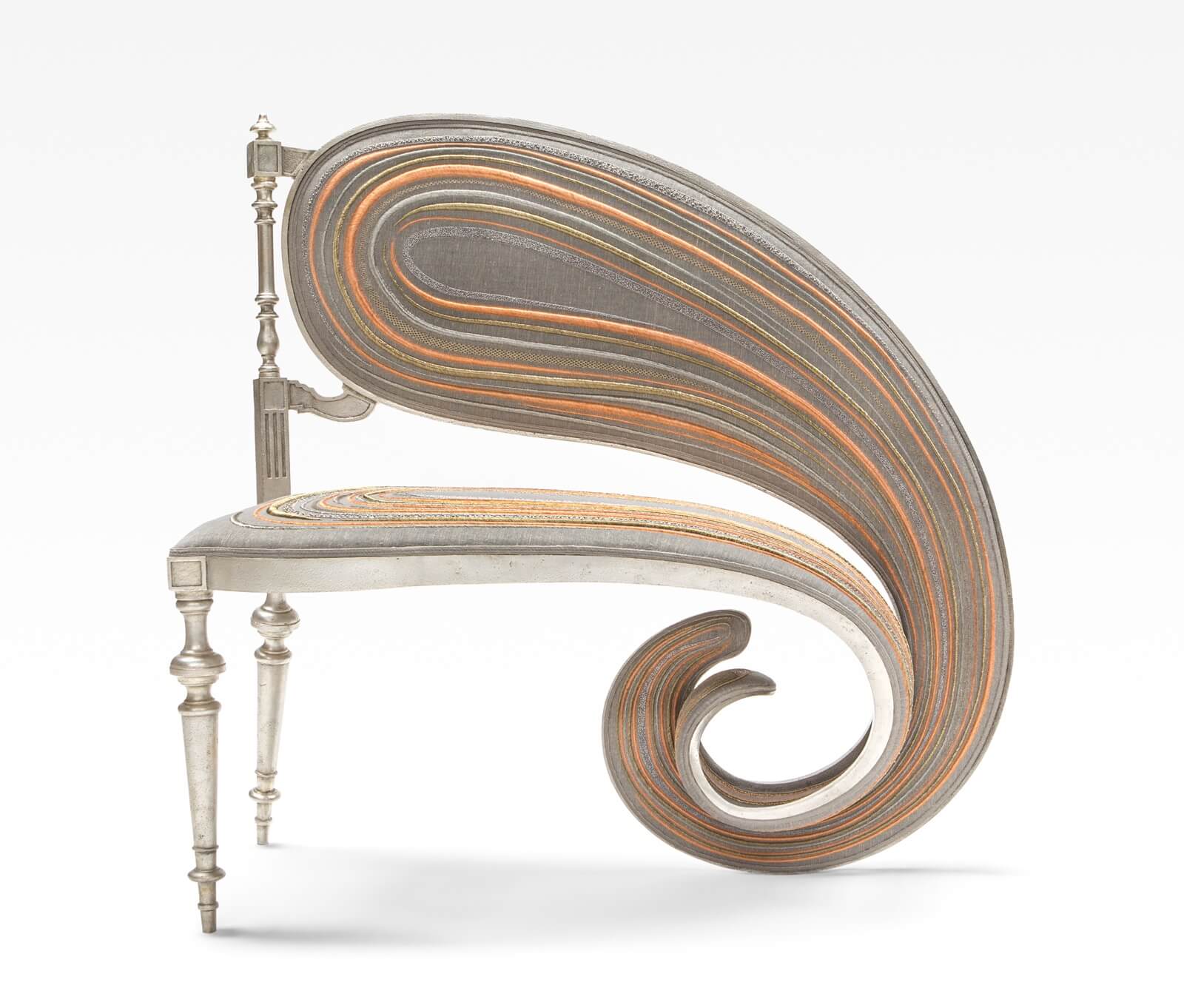 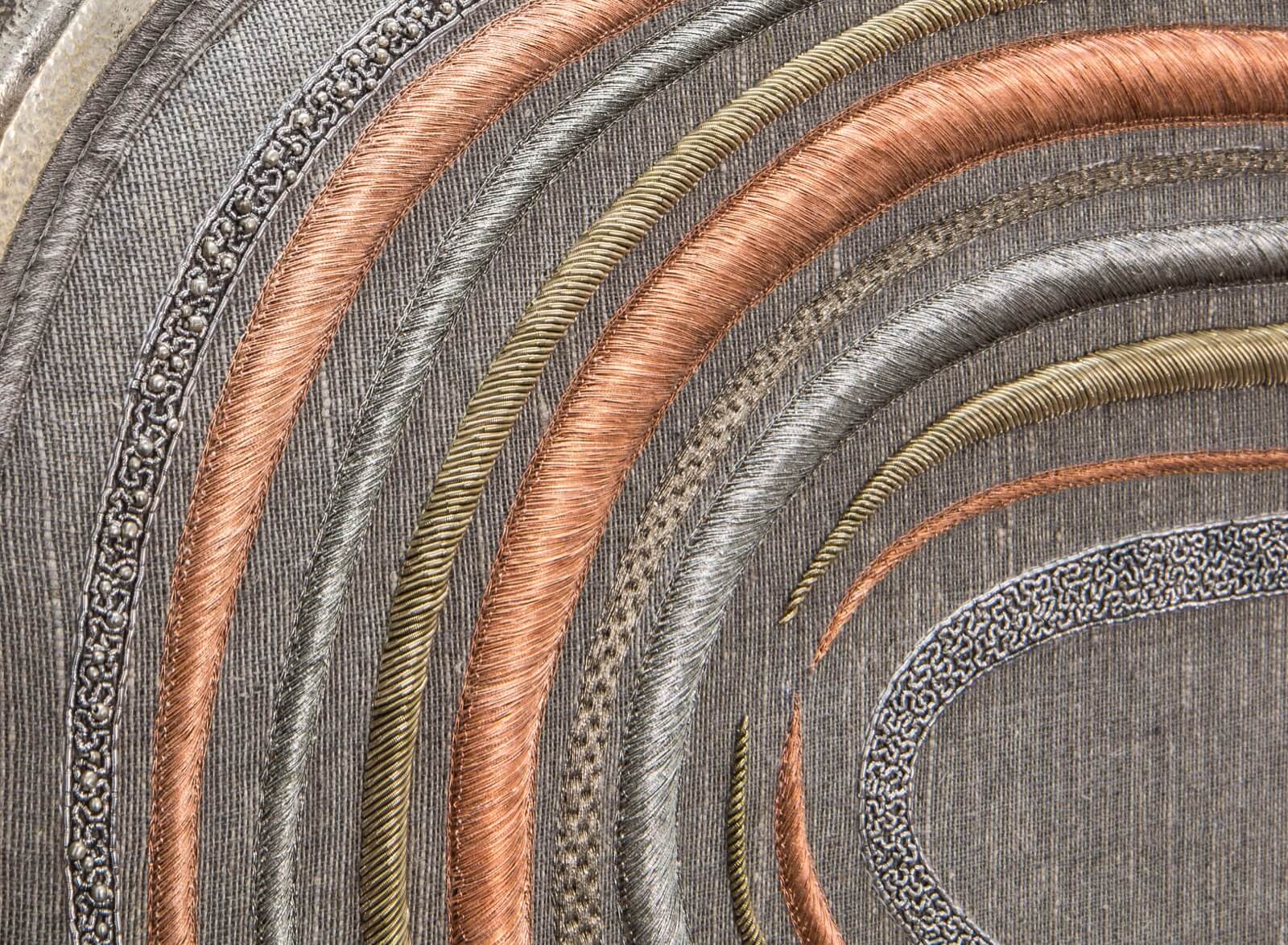 Le Gaillard also references the ‘Fragile Future’ series of Studio Drift as an example of a new craft process being born out of the original concept. “Creating the works from real dandelion heads is incredibly labour-intensive, so it was just not possible for Ralph and Lonneke [founders of Studio Drift] to make every piece themselves. Instead, they now have a cottage industry of people who they have personally trained to execute the technique, but they are still very personally involved with the entire process.”

Le Gaillard echoes the belief that collectors are increasingly interested in the artisanal aspect of collectible design, “People are fed up with contemporary, conceptual art that they don’t ‘get’ or can’t relate to, whereas this type of work offers an immediate and strong connection to the designer and maker. There is a renewed respect for the intelligence of the hands and the feeling that these are pieces imbued with the soul of the maker.”