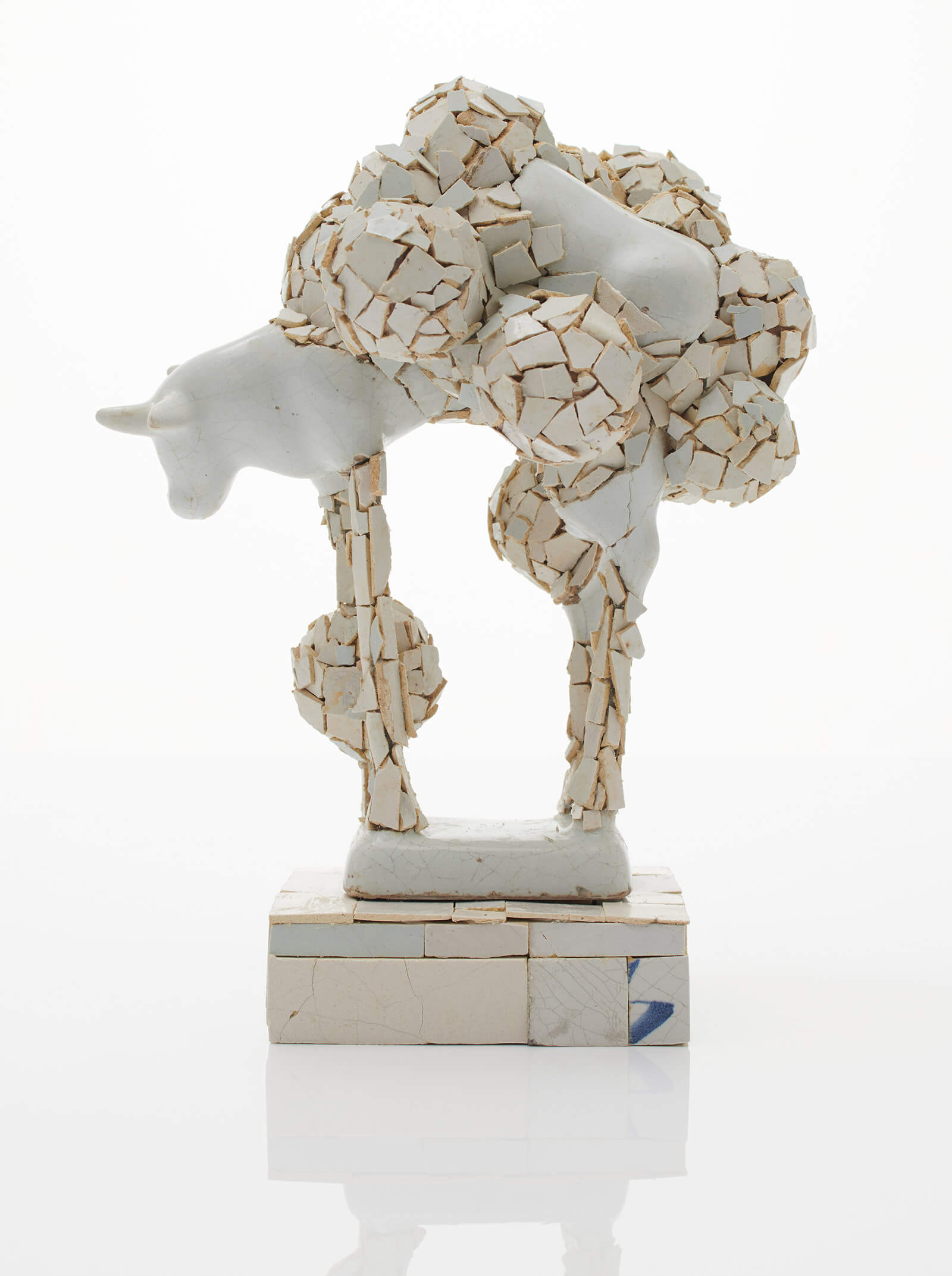 AT LOCKDOWN, CERAMICS SPECIALIST and gallerist Joanna Bird rose to the exigencies of the moment by offering a group of artists an open brief. They were invited to make (or select) any kind of artwork they wanted, in any medium, which they felt best expressed themselves: a self-portrait as an object.  The result is this summer exhibition, Autoritratto. Polonius’s apparently simple injunction to his son Laertes in Shakespeare’s Hamlet, “This above all: to thine own self be true”, is the show’s motto, engraved on a square mirror in a hand-gilded frame, by Charmian Mocatta. A phrase that builds in ambiguity the more you stare down your own inscrutable reflection, it has stimulated in this particular year, when we have all been thrown back upon ourselves, a startling variety of moving and expressive objects.

Each of the artists has responded in a way that reaches deeply into his or her own practice and temperament. So, the distinguished photographer of architecture and still life, Hélène Binet, offers a series of elusive, atmospheric hand-printed black and white silver gelatine prints, made in her home, including this image from her kitchen, celebrating the miracle of light which makes photography – as well as organic life – possible.

There are accomplished functional ceramics, expressions of a lifetime’s expertise and the subtle communion between individual hand and soul with clay, wheel and glaze, by Richard Batterham, Clive Bowen and William Plumptre. A series of craggy tea bowls allow Akiko Hirai to reflect upon her own Japanese identity, while an impressive sculptural large-scale pot from 2013 by Nicholas Rena, a memory protected by its transformation into a three-dimensional vessel, is called ‘Green Remembrance’. Pippin Drysdale and Annie Turner meanwhile use clay to explore intently their attachment to certain beloved landscapes, whether Australia’s desert or Suffolk’s tidelines. 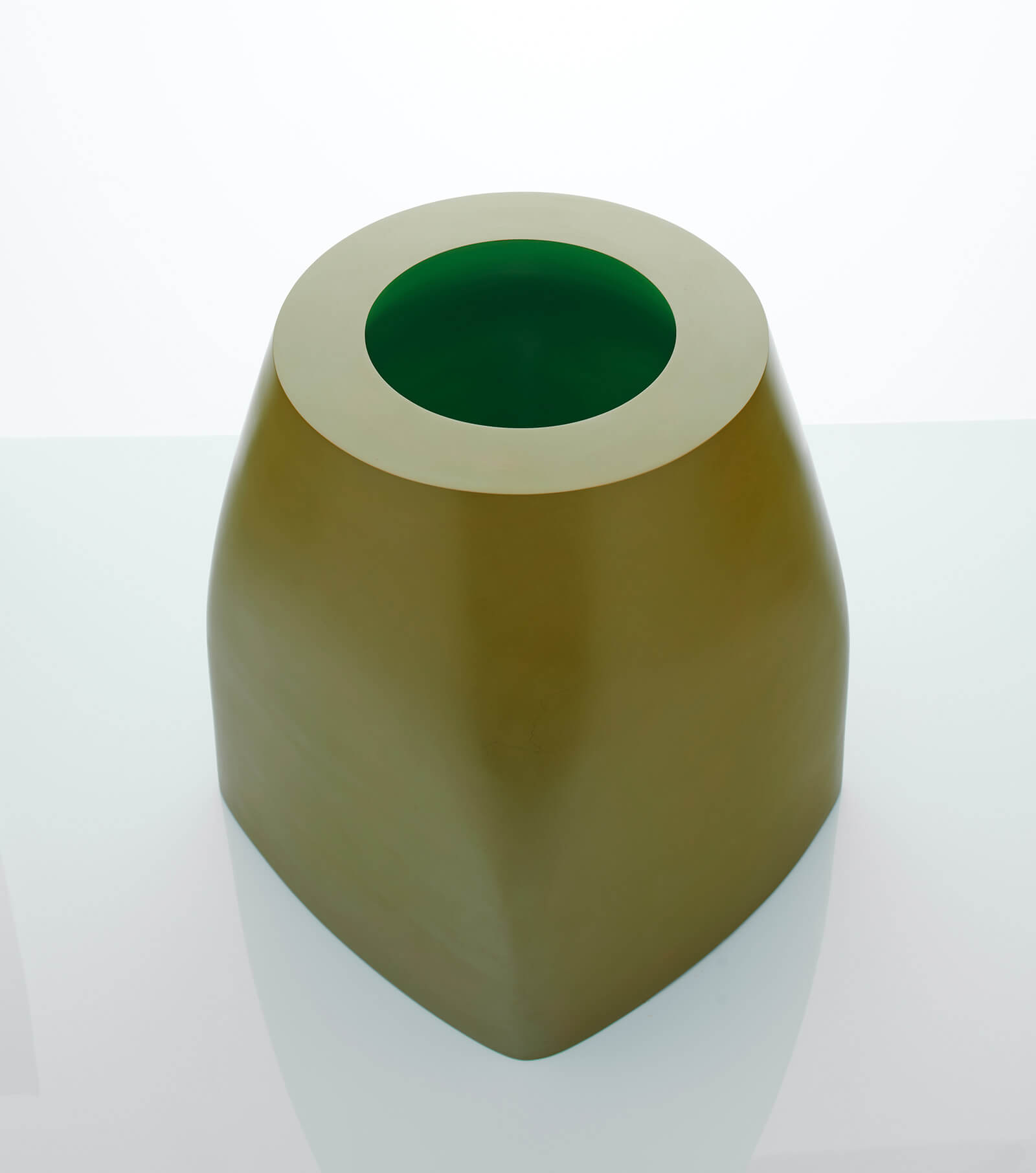 In glass, Geoffrey Mann has created a series of vessels contorted, through 3D printing, in response to the digital translation of the sound waves of a cinematic conversation – a portrait of what we sometimes miss in life, through our bewitchment by the perfect surface. Tanja Pak too pursues the intangible in her poetic glass objects, ‘Opaline Breaths’, her own glassblower’s breath immortalised, rendered strange. 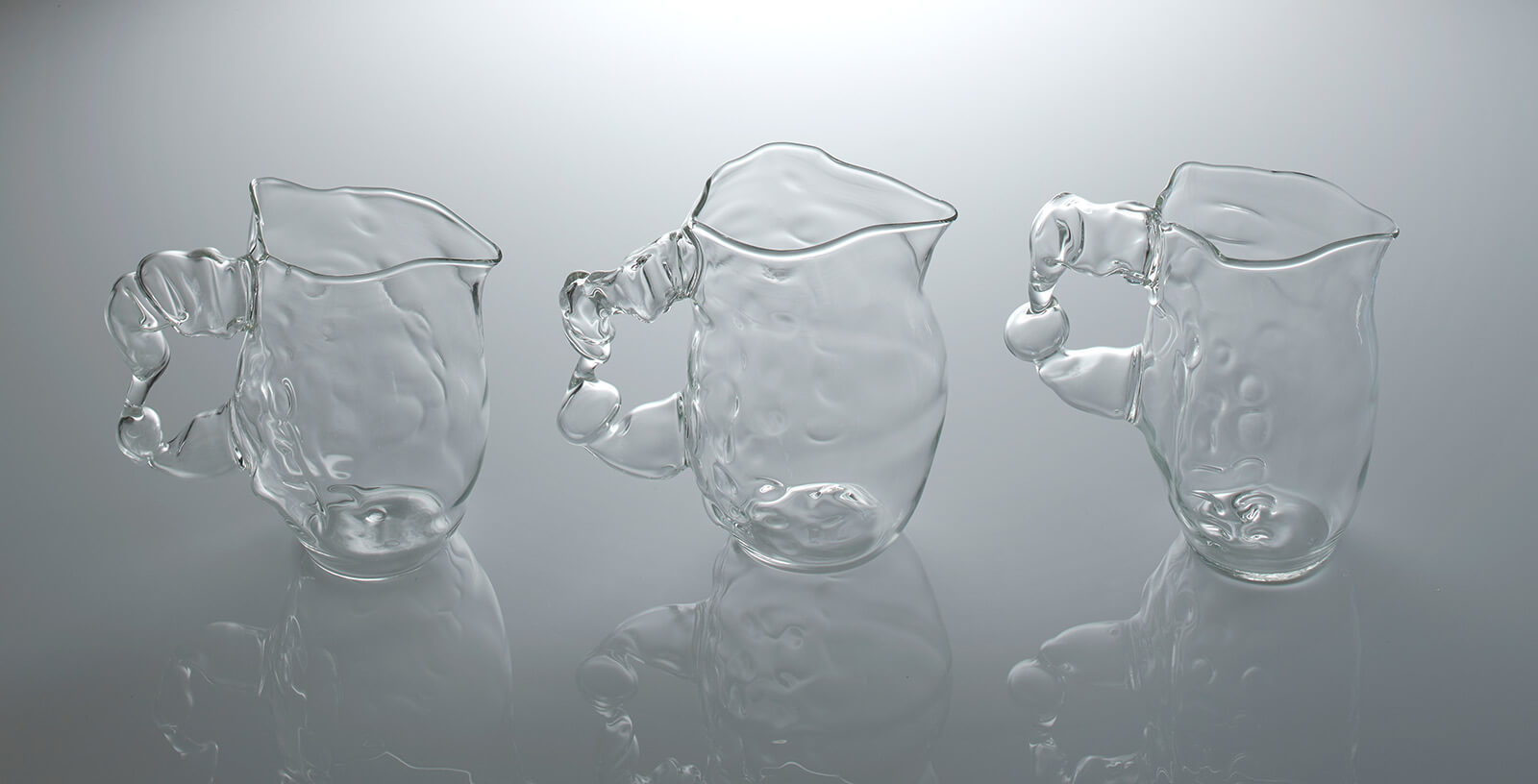 Gregory Warren Wilson works in installations, staging clusters of found objects around which he weaves elaborate tales of transient connection. Bouke de Vries also starts with broken ceramics – in this case, Delftware from his native Holland – which he rebuilds and transforms into ironic expressions of his own. As Glenn Adamson’s comments in his thoughtful catalogue essay for the show, “he treats history not as a canon but a quarry, riffing on its remnants and allowing new interpretations to bloom.”

The show runs the whole gamut of materials, including Tracey Rowledge’s installation of drawing, ‘Each Day is Different’ (an assertion of survival in the face of lockdown’s eradication of difference), as well as the characterful three-dimensional linen textiles, by Susie Thomsom, titled ‘The Interval between Schumann and Fauré’. Thomson says of them: “The work feels comfortable in the palms of my hands. The touch, the volume and the movement are like inconsequential memories, mostly forgotten – but not quite.” You would be hard put to explain them, but that is the point. These are all individually-wrought objects, where personal identity has surfaced inexorably, through materials and a process perfected over many years, into three-dimensional form. 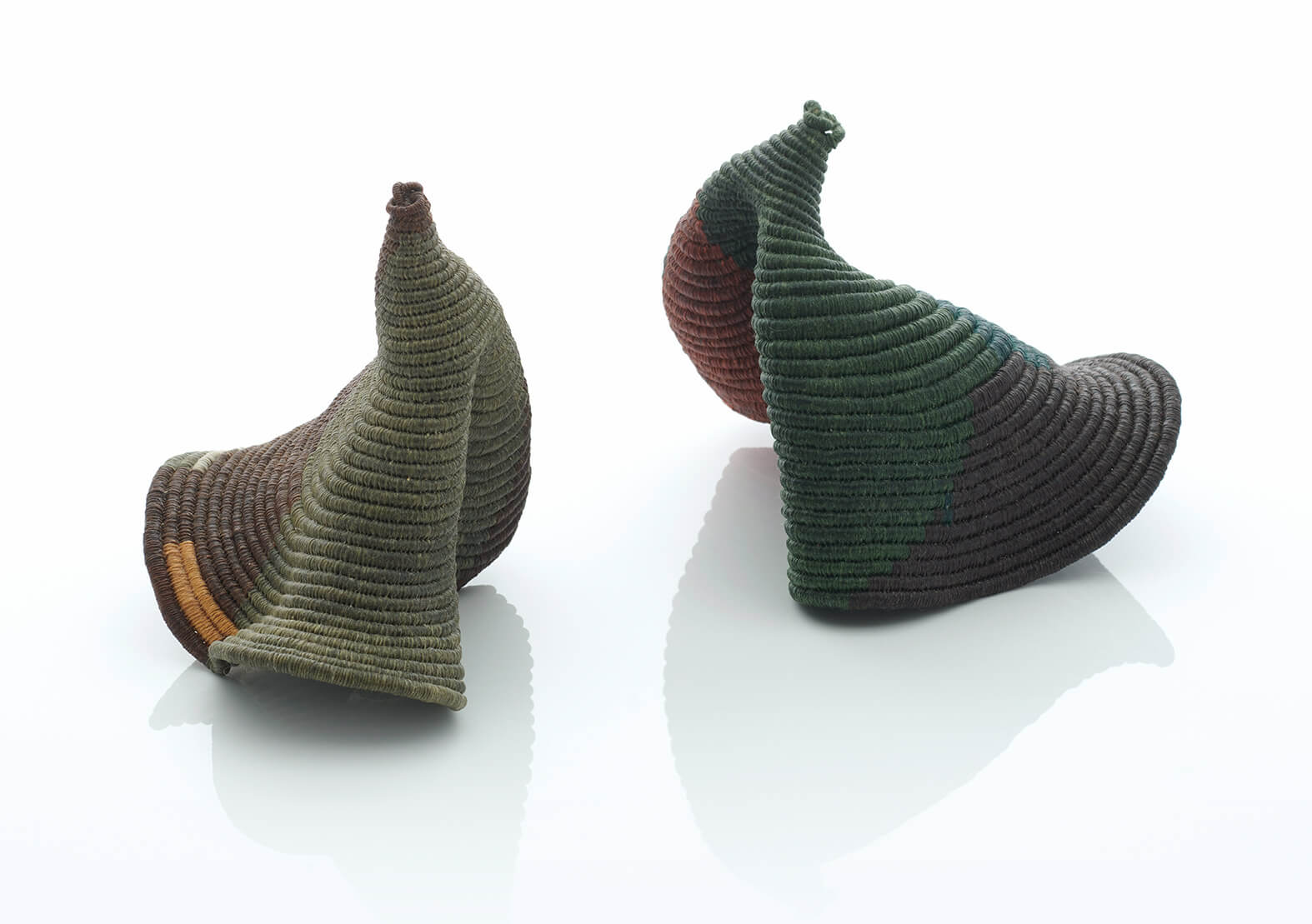 In consideration of the times, this summer show will initially be presented online, but visitors will be welcomed from 28th July. So, start by feasting your eyes – in weeks you can hold them in your hands.

An introduction to the exhibition by Joanna Bird
COURTESY: Joanna Bird 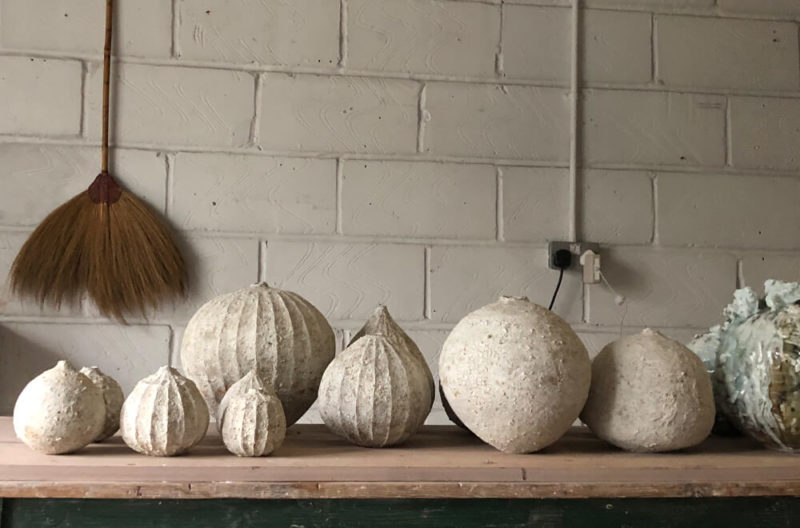 A potter in London.

A potter hunkered down in West Wales. 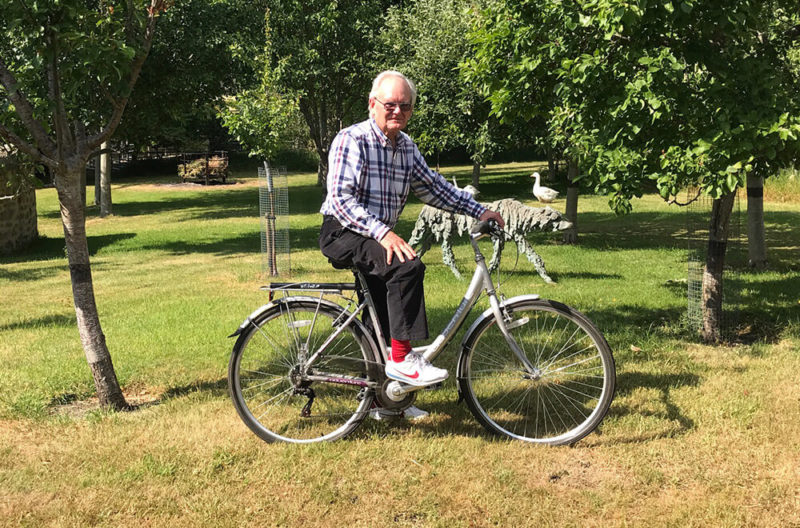 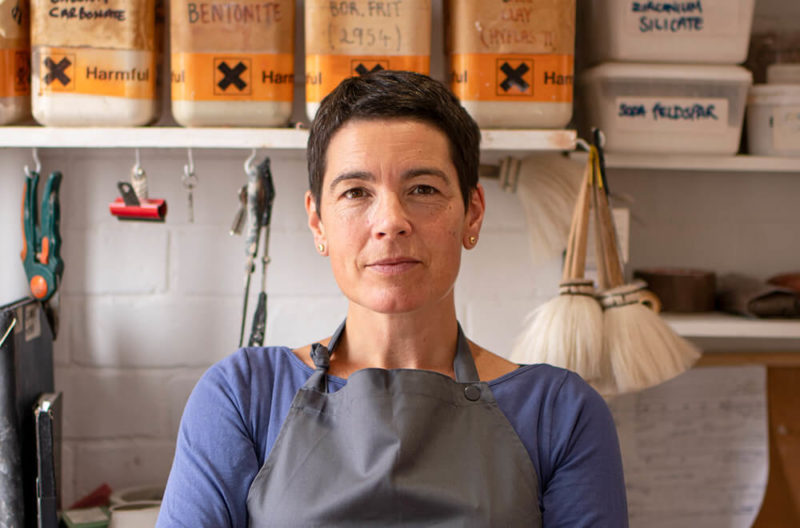 A ceramicist exploring new glazes in her Belfast studio.