VENICE IS A tough backdrop. If you are going to put on an exhibition there, not only must you compete with some of the best artists in the world, but also with the magnificent architectural perfection of the city itself. ‘Dysfunctional’, which opened during the Venice Biennale at the Galleria Giorgio Franchetti at Ca’ d’Oro, courageously attempts not only to create a powerful exhibition but also present objects at the border of design that call for new directions in modern sculpture. Julien Lombrail and Loic Le Gaillard, co-founders of Carpenters Workshop Gallery, who mounted the exhibition, desire to question when design becomes art. 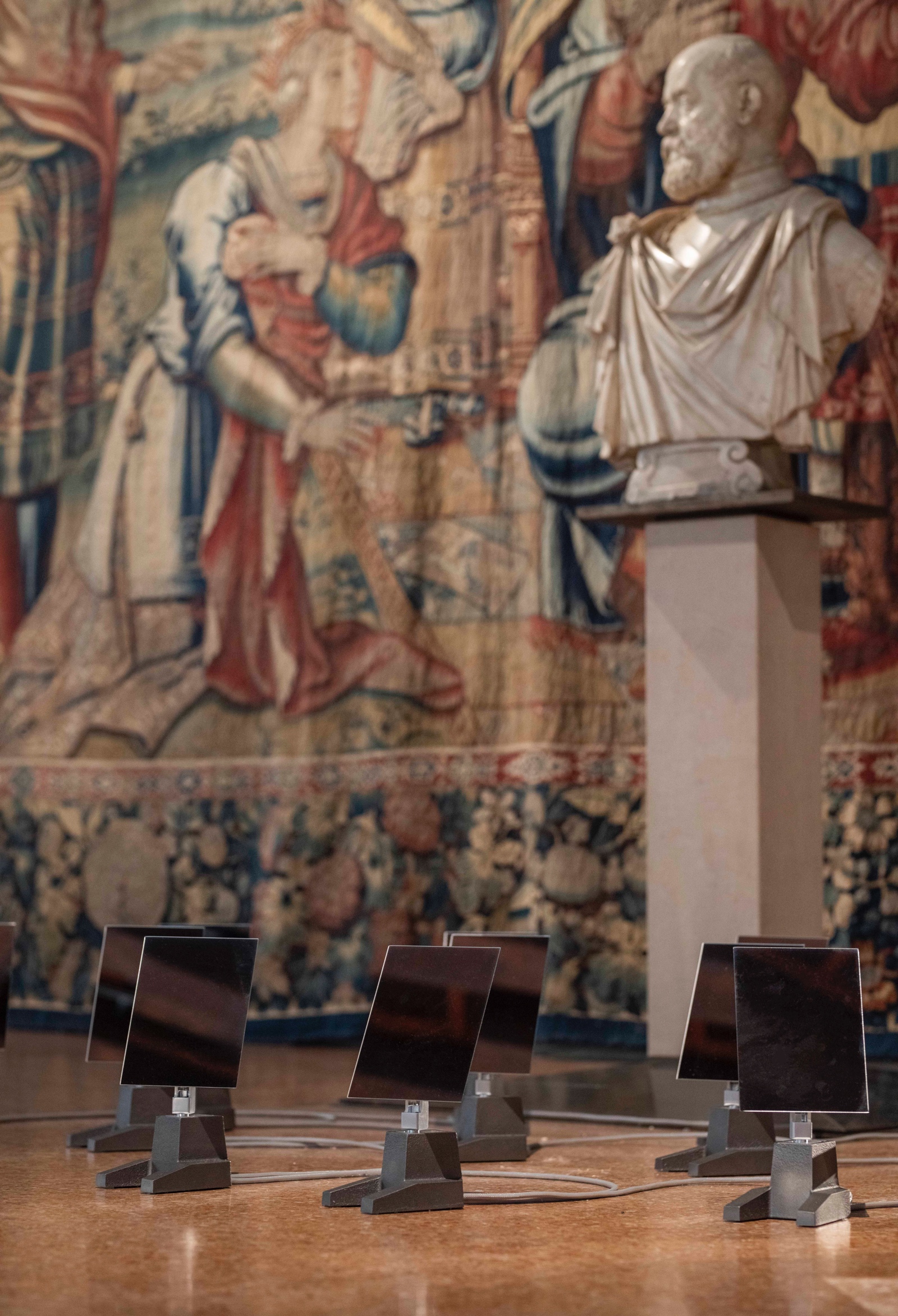 The concept of dysfunction emerged as a medical term at the start of World War I, to describe abnormalities or failures of function. It was used literally for body parts or organs that were impaired or failed to work. By the end of the 1940s, the term had been absorbed by sociology; a word used to address the difficulty of dealing with social or emotional relationships. It is an interesting choice of title for an exhibition of 17 artists from the roster of Carpenters Workshop Gallery. Some of the objects on show here still maintain elements of the functional. They illuminate, mirror, can be sat on, or even tell the time. However, the pieces and installations here refuse to conform. They refuse to just be useable things, instead making function a mode of interaction and cultural engagement. Here sitting is in itself an artistic experience.

All the pieces in the show were created or chosen to reference Venice itself. The artists all touch on the city’s instability, its floods and its history. From Random International’s kinetic mirror installation drawing on Venice’s role in the technological development of the looking glass in the 16th century, to Atelier van Lieshout references to the city as a centre of trade and transaction, this is a show that attempts to bring focus to the historic. 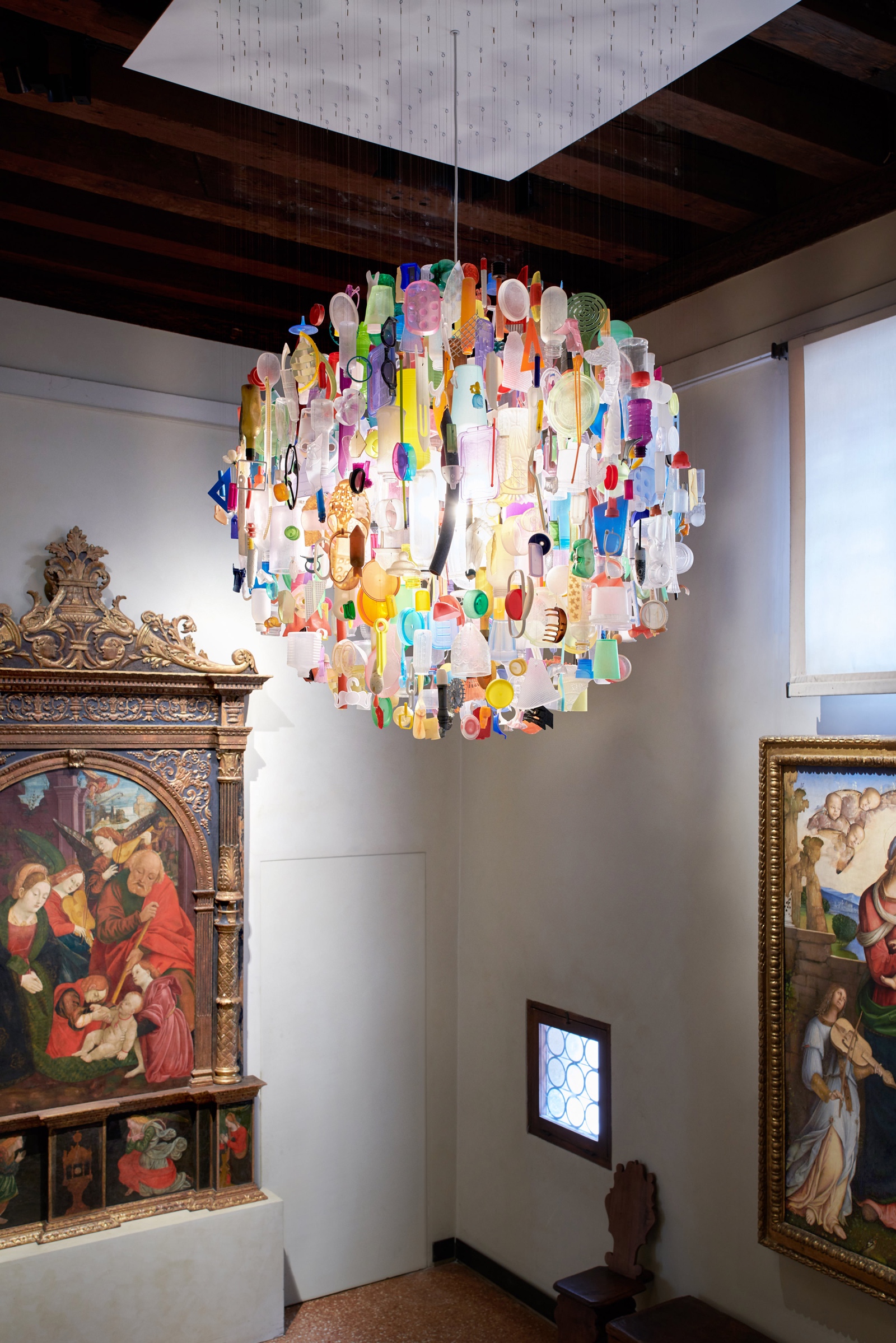 The first thing that hits you on entering the show is light. The ground floor is filled with an amorphous mycellium-like light installation by Nacho Carbonell. It is a series of sculptures titled ‘Inside a Forest Cloud’ or ‘Under A Light Tree’ made from rounded mesh blobs emitting a warm orange glow, perfect for the darkened palazzo 15th century entrance. There are also a number of other chandelier-pieces in the show including a signature hanging work made from salvaged plastic by Stuart Haygarth, a cluster of illuminated dandelions by Studio Drift and a bronze chandelier by Frederik Molenschot. Molenschot’s patinated bronze and light piece ‘Citylight Chapon’ echoes the Venetian Gothic environment. Here bronze vines intertwine curved lines holding small lights that seem to balance precariously. All of these lighting works and hanging structures bring attention to the building itself, adding a sense of the modern but not distracting from evident history. All function with great effect, playing with a dark building made for candlelight. 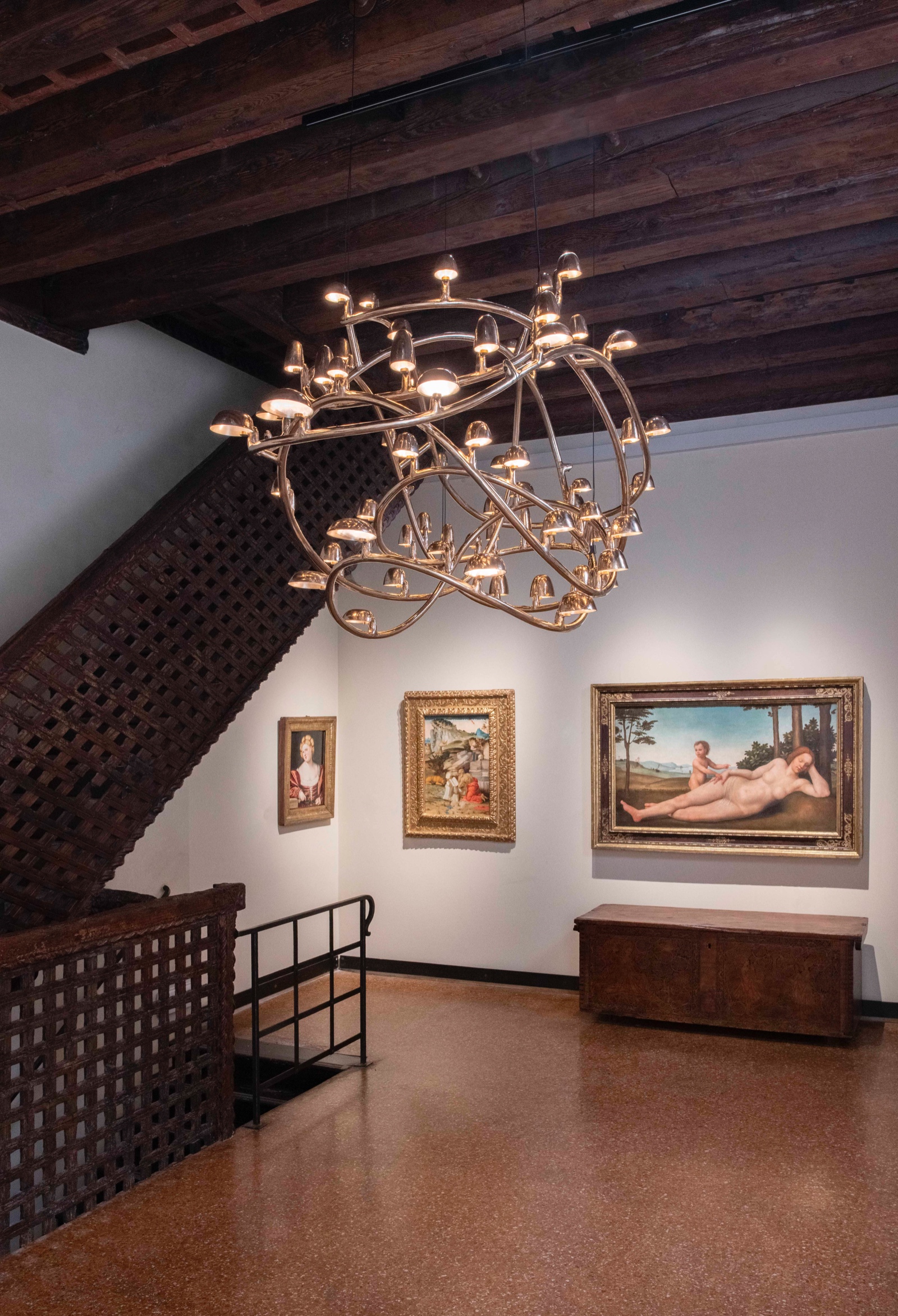 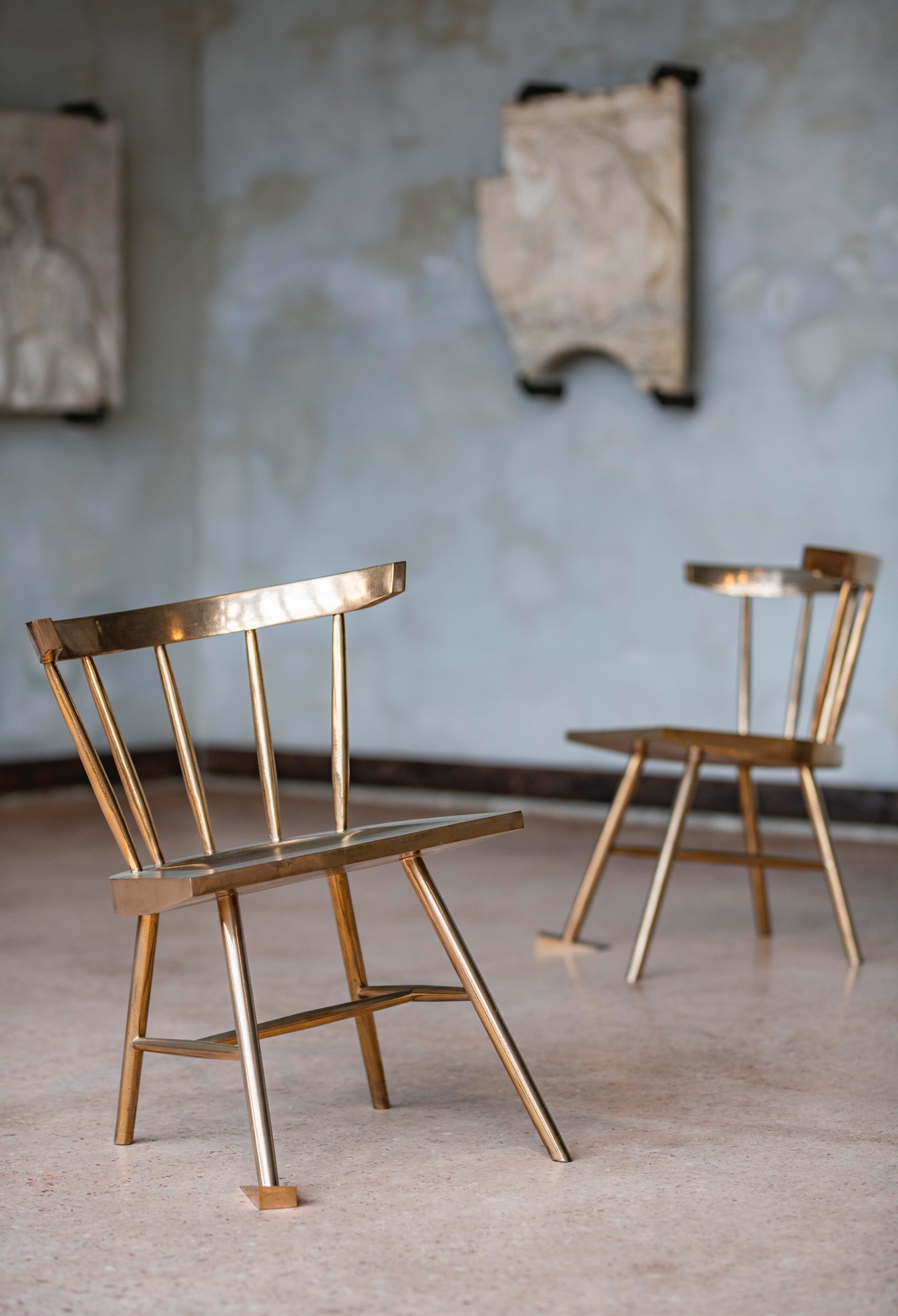 The exhibition’s objects do not attempt to compete with notable paintings on display by Andrea del Sarto, Andrea Mantegna and Jan van Eyck from the 19th century Baron Giorgio Franchetti’s collection. ‘Dysfunctional’ focuses purely on the three dimensional. Some of the best pieces are on the balconies of the building. Virgil Abloh filled his with polished bronze seat installation ‘Acqua Alta’ series, using his background as an architect and engineer for his first furniture collection. His pieces refer to the flooded and non-flooded state of the city, the legs of the chairs or benches seeming to sink at angles and melt into the floor. On the top balcony of the building, the Verhoeven Twins made a more decorative installation of glass bubbles – touching on Venice’s most famous industry. The borosilicate glass forms reflect the building in a rainbow-filled repetition with hypnotic results. 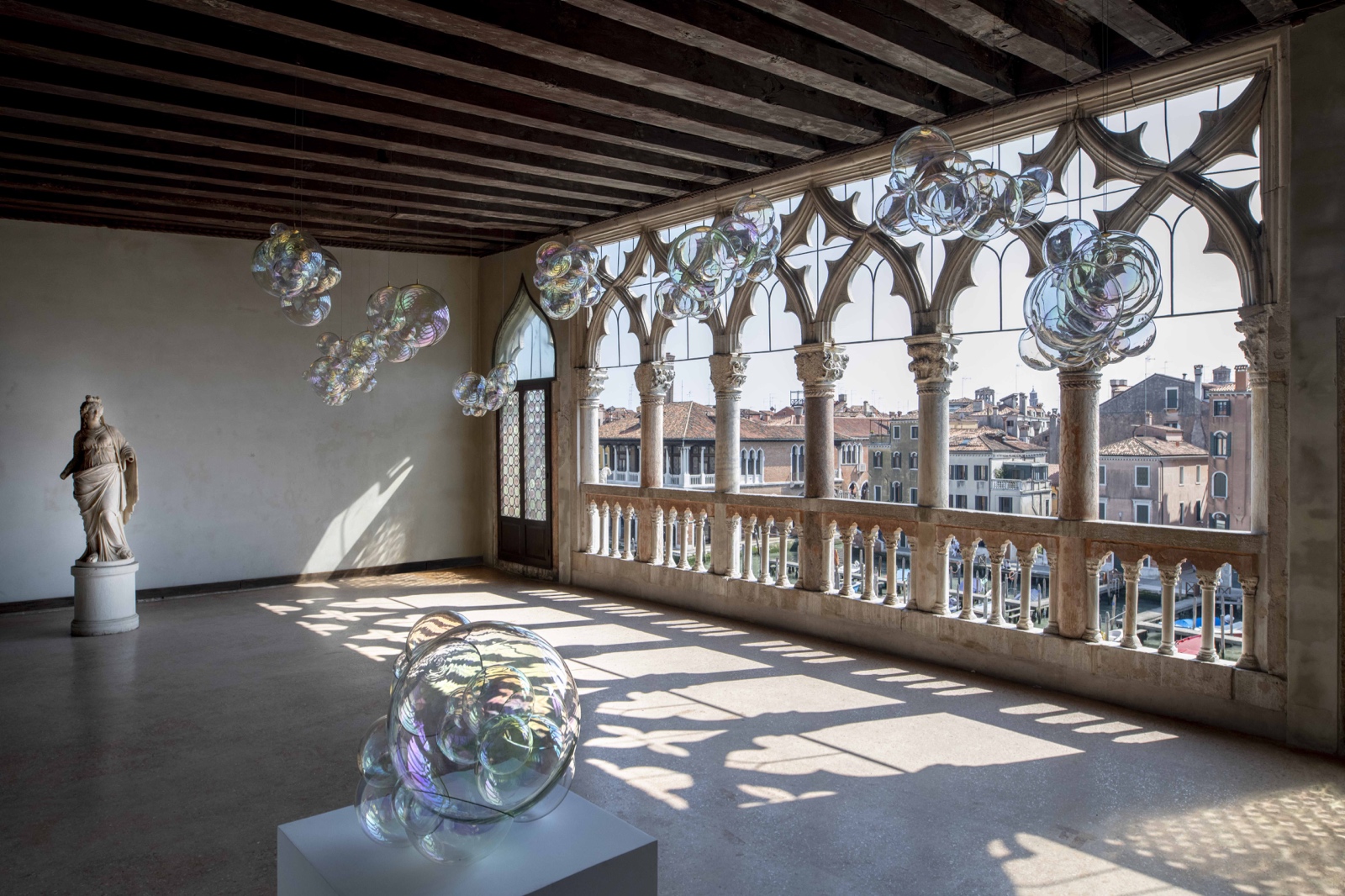 Maarten Baas’s ‘Real Time XL The Artist’ (2019) is arguably the most ambitious pieces in the show. It consists of a grey small stucco house structure, placed in the centre of the room. On one side it appears as if the artist himself lives inside the ‘building’, his silhouette illuminated from within. We watch as in real time he changes a clock, and erases and redrawing the hands of a human-scale clock as they move around in a circle. This video work references Leonardo da Vinci’s ‘Vitruvian Man’ and the artist himself who died 500 years ago this year. It is a perfect metaphor for the city itself but also the desire of ‘Dysfunctional’ to redefine art. Da Vinci was clear about crossing the boundaries between visual art and science, design and painting in his innovative practice. This exhibition, in its 21st Century way, attempts to do the same. 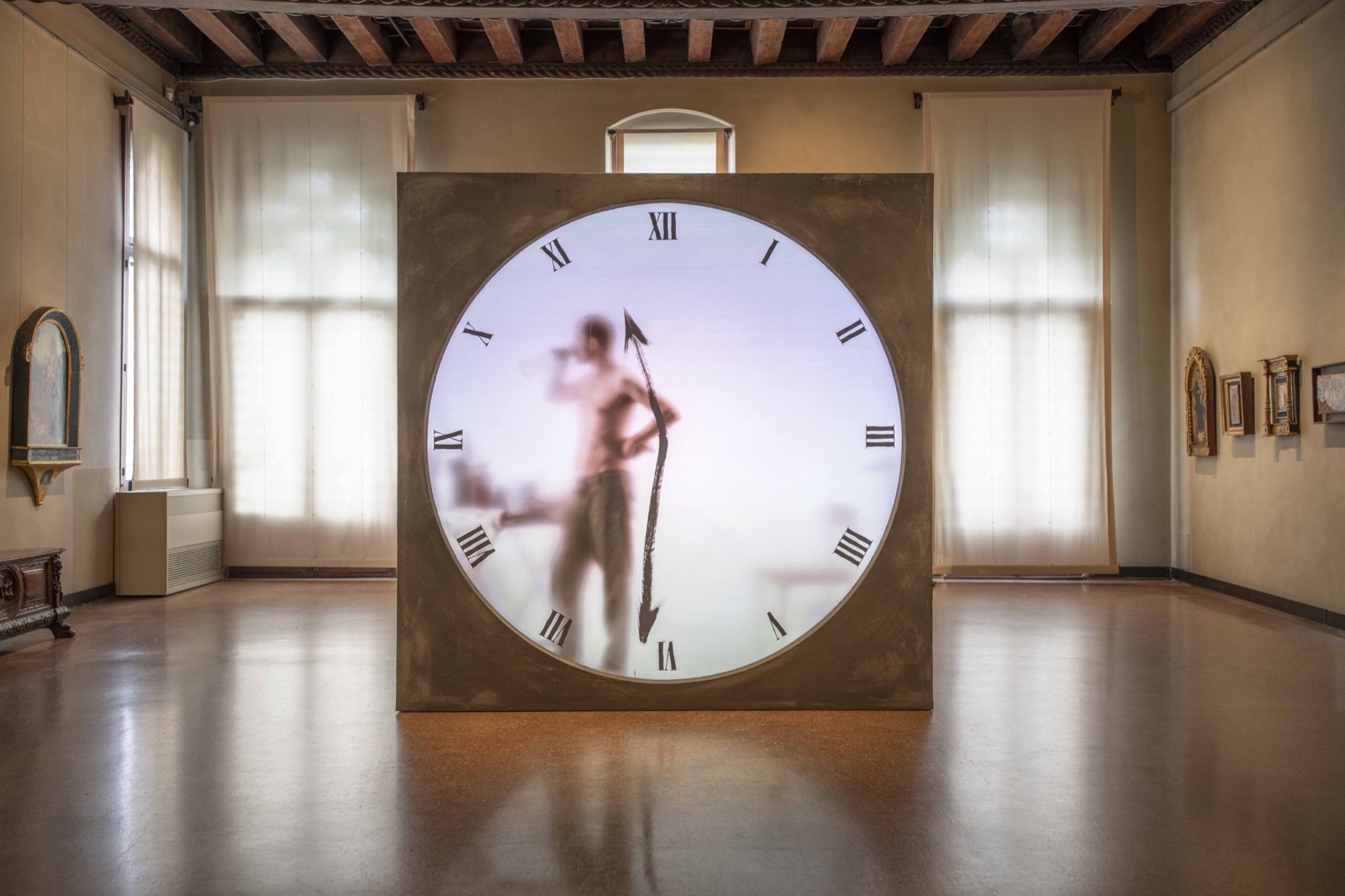 Article by Francesca Gavin
Francesca Gavin is a writer and curator based in London. She is the author of six books, was the co-curator of Manifesta11, is a contributing editor at Kaleidoscope, good trouble and Twin and has a monthly radio show on NTS on art and music. View all articles by Francesca Gavin