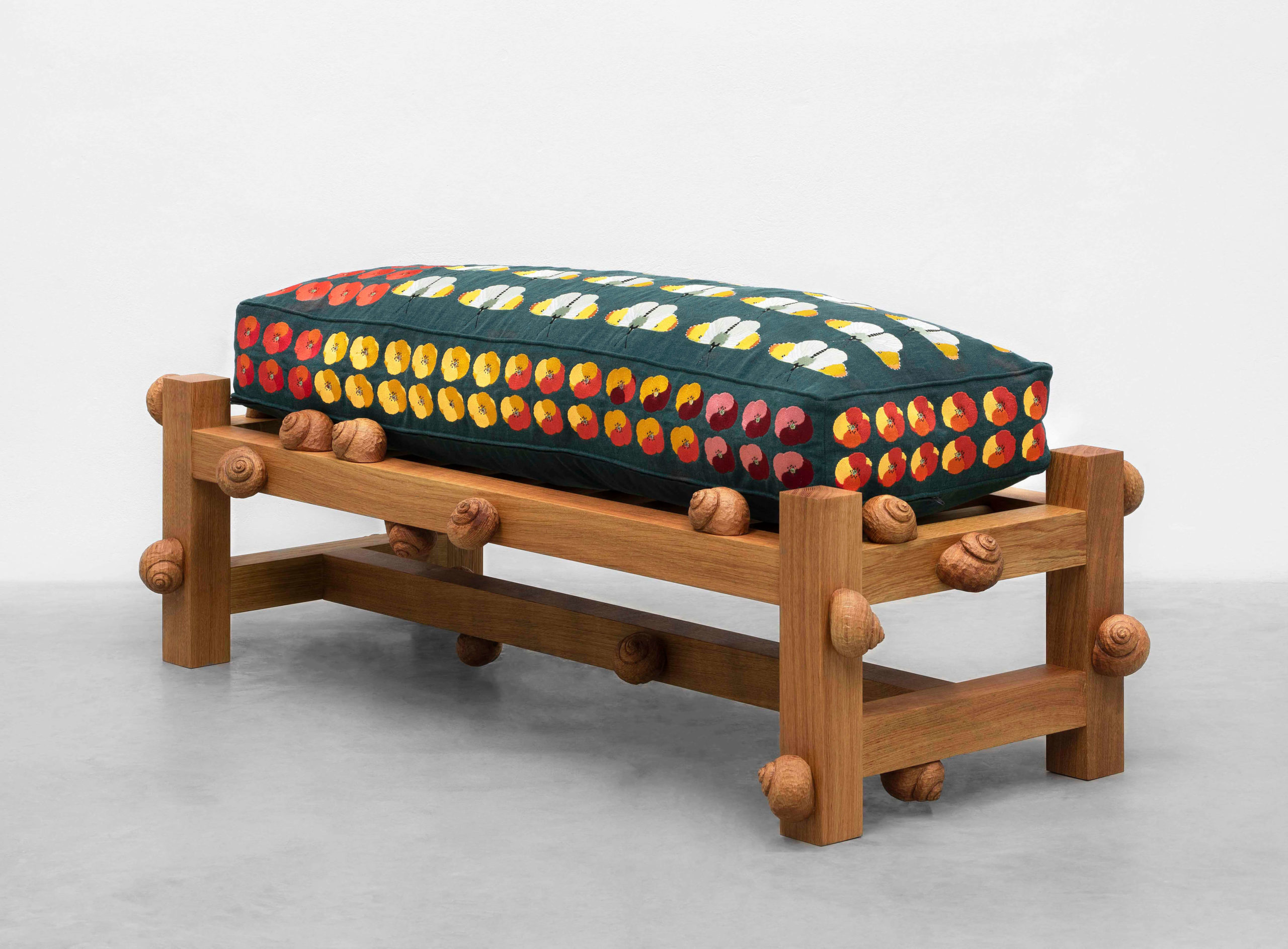 FROM THE 1-3rd of April the Milanese crowd gathered for the 26th edition of its annual art rendez-vous – the miart fair. Galleries from all over Italy, as well as a handful from abroad, presented a selection of modern and contemporary art, both established and emerging. The fair was mostly focused on contemporary art, but as design is closely connected to fine art in Milan, collectors were able to enjoy a selection of collectible and limited-edition pieces. 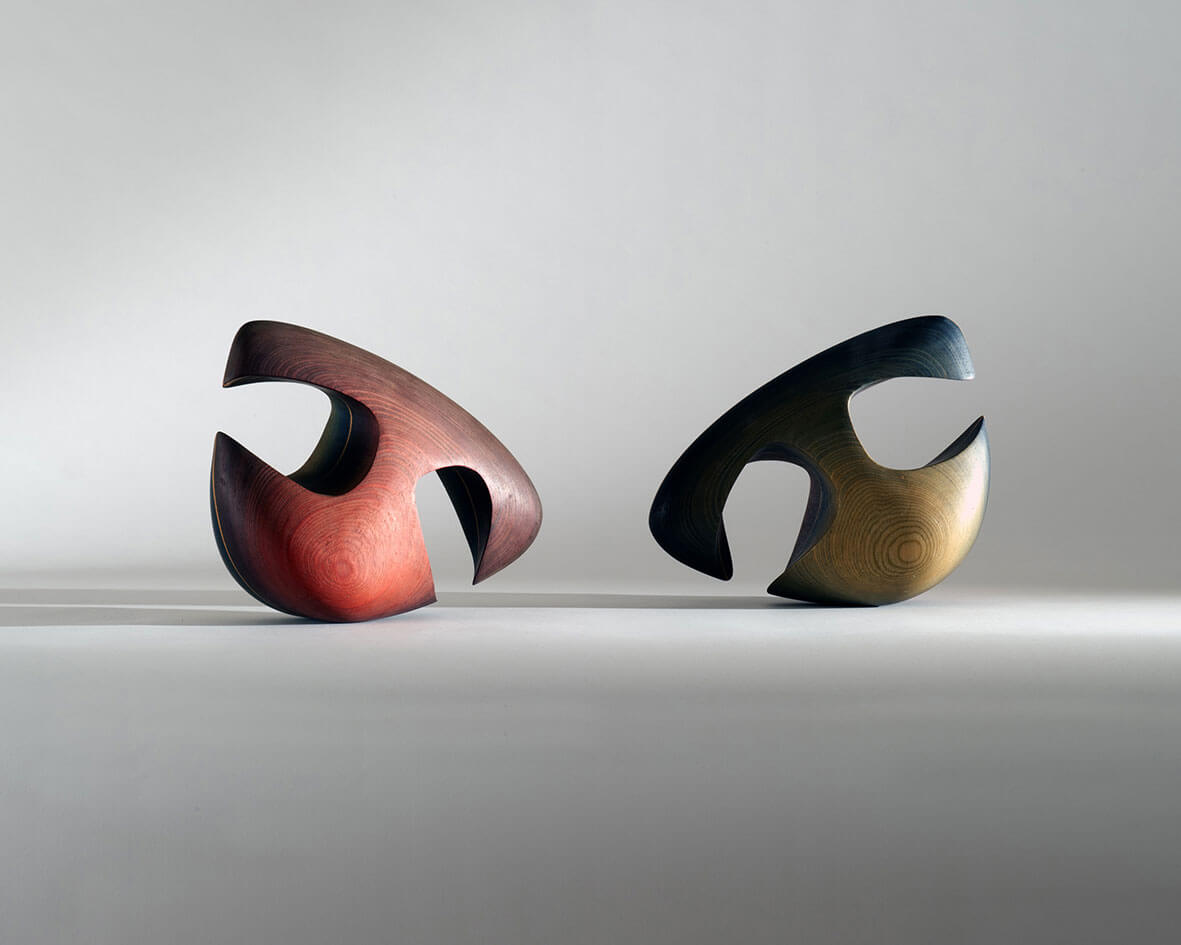 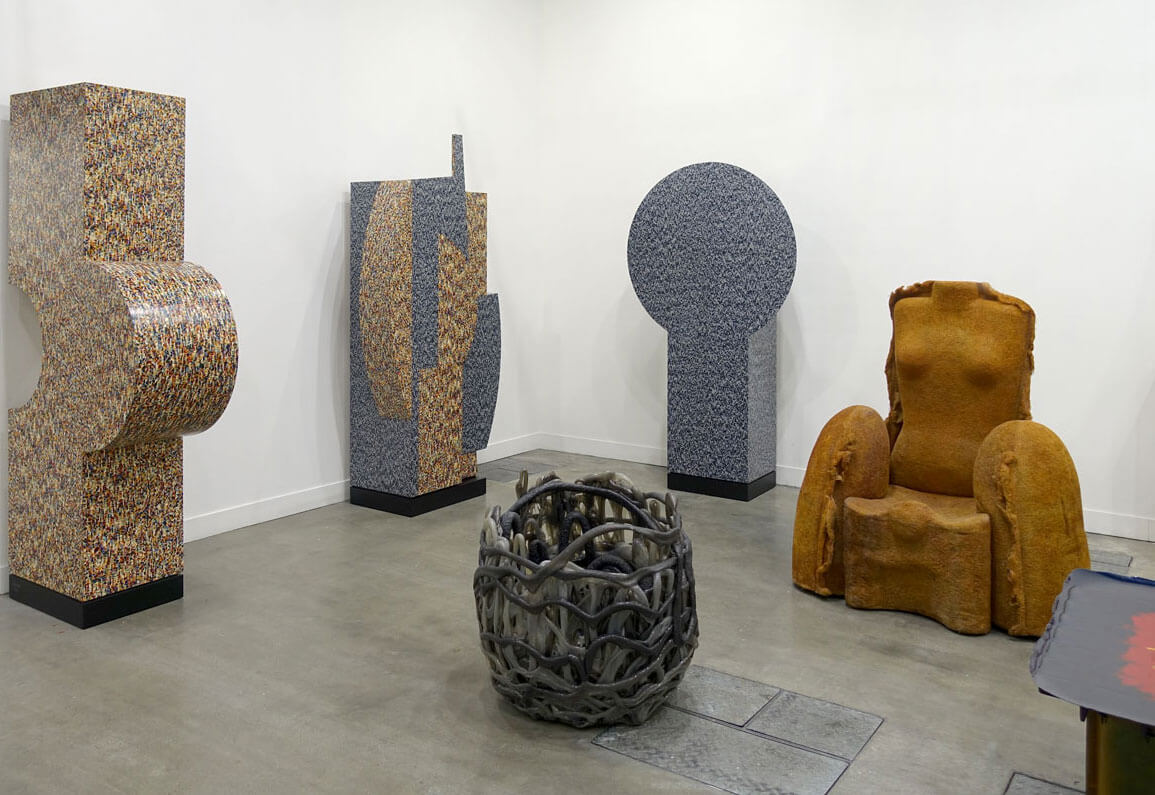 Mendini embodies the humour and technical virtuosity characteristic of 20th century Italian design. His three ‘Primiti’ cabinets conceived with LAPI in 2018, offered a sculptural and psychedelic take on the ‘cabinet de curiosité’. Gaetano Pesce was introduced through a meaningful selection of creations such as three rare ‘ossa’ (bone) lamps from 1989, a signature resin low table from 2009 and the ‘Feminino’ chair from his ‘Il Rumore del Tempo’ exhibition in 2005. 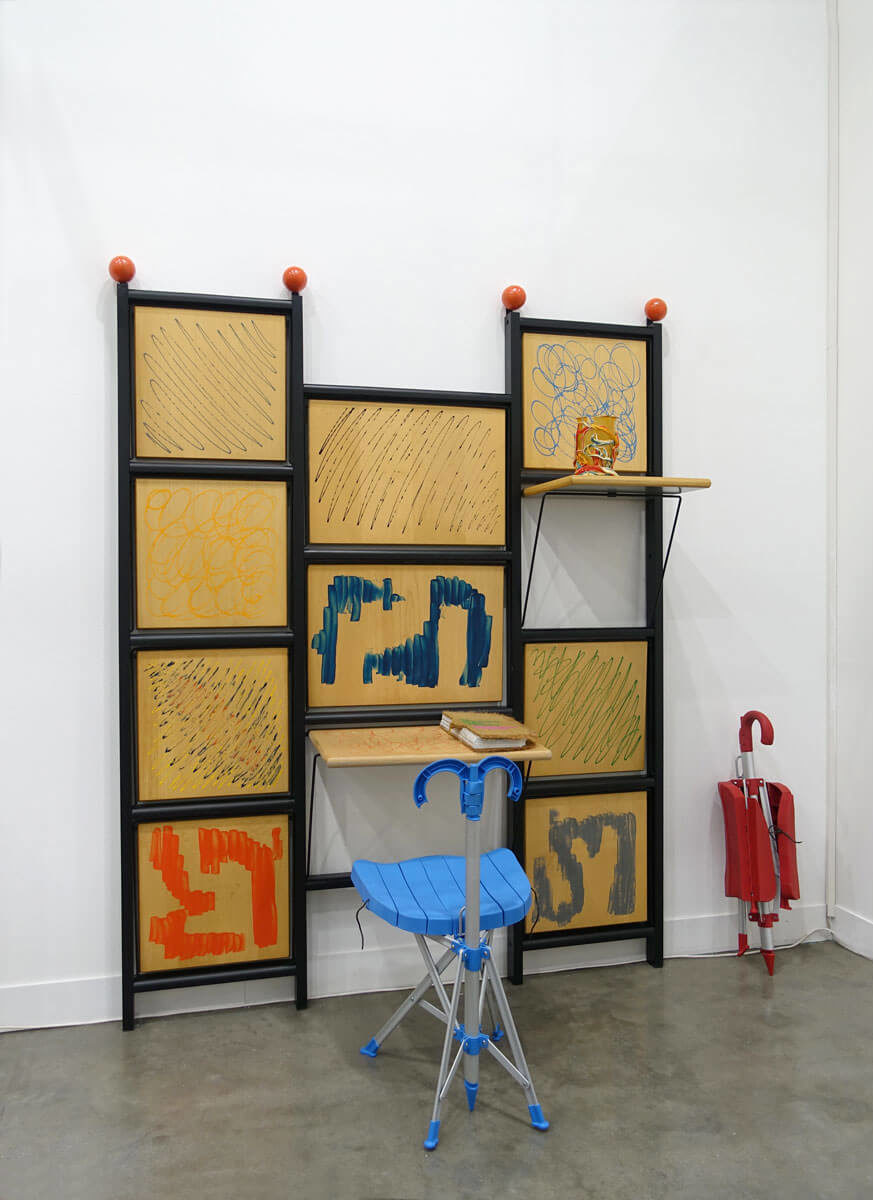 One of Pesce’s former collaborators, Matteo Pellegrino, showed a group of witty vases made of Caparo stone and brightly coloured silicones. According to Raffaele Marco Lotito, director of Luisa Delle Piane, these works really caught the eye of the public. “It is interesting to show in the context of an art fair,” he said, “as I have always believed in raising awareness and educating the public on the most experimental forms of design, on unique pieces, on how these pieces could create an emotion and be collected just like works of art.” 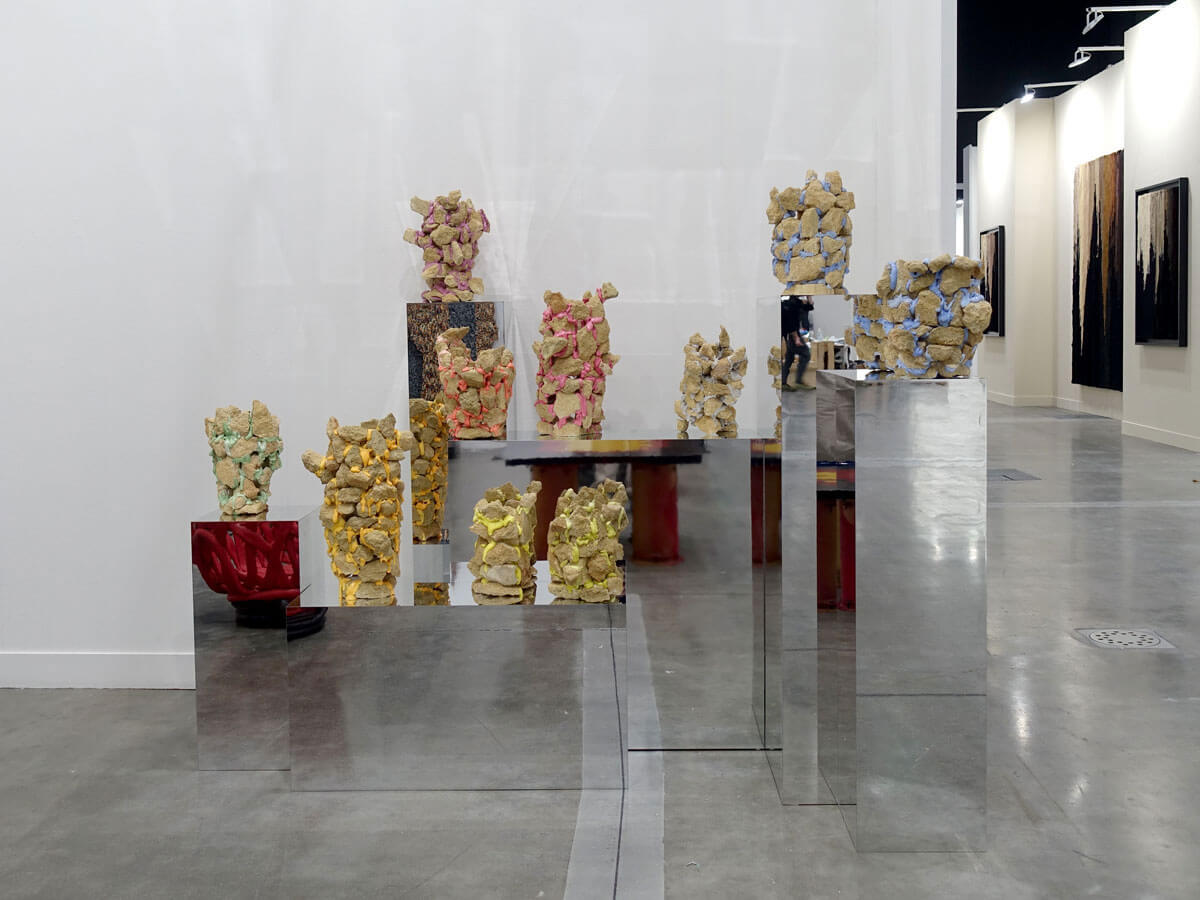 Nina Yashar, founder of Nilufar gallery, commented that the fair is also “an opportunity to understand where we stand by confronting historical and contemporary realities.” This year, her gallery dedicated its exhibition to Andrea Branzi in anticipation of the important year ahead for the designer who will be participating in the 24th edition of the Triennale International exhibition. 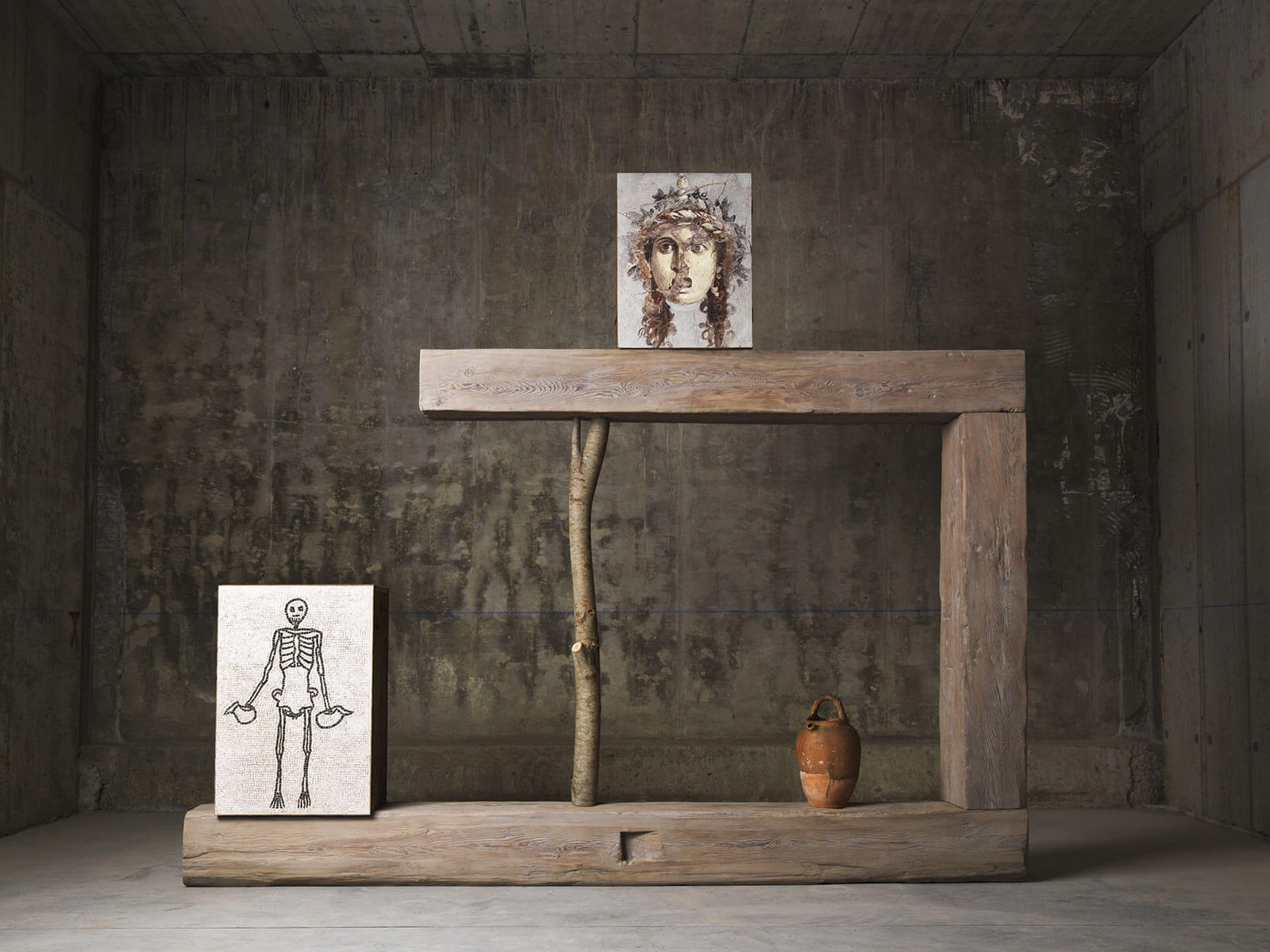 Between the fair and their exhibition space Depot, Yashar recreated the exhibition ‘Grandi Legni’ (‘Large pieces of wood’) originally presented in 2009 at the Alaïa gallery in Paris. The ‘Grandi Legni’ are large archetypal structures that offer thoughts on time, the act of creation, progress and even the shamanic dimension of design. 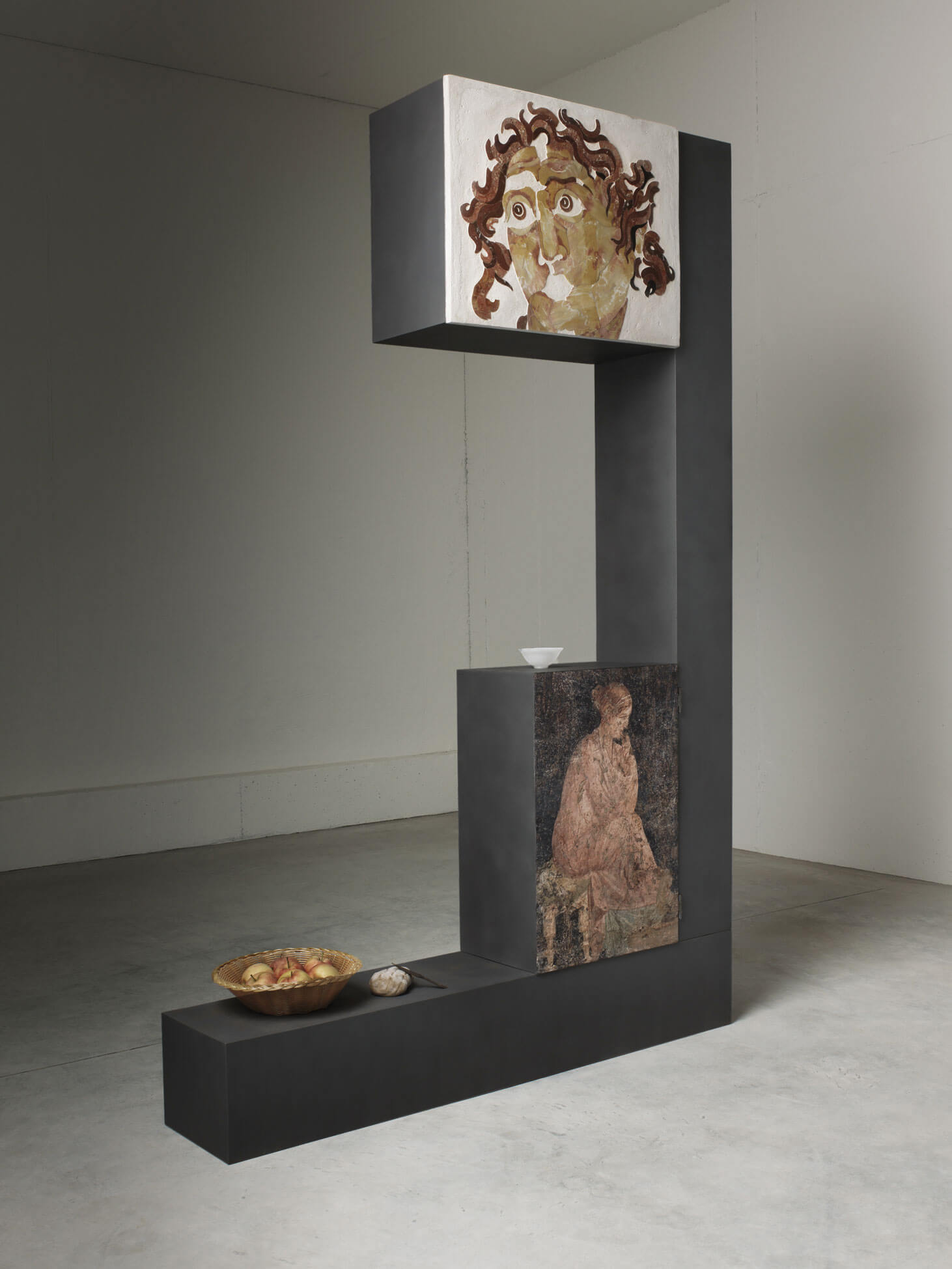 They voluntarily avoid any formal reference to industrial techniques as Branzi considers it a “terrible inheritance” that made us obliterate previous forms of creations. The conceptual, but always slightly mischievous, Italian master defines ‘Grandi Legni’ as “autonomous presences … neither design nor architecture, but in part design and in part architecture.” 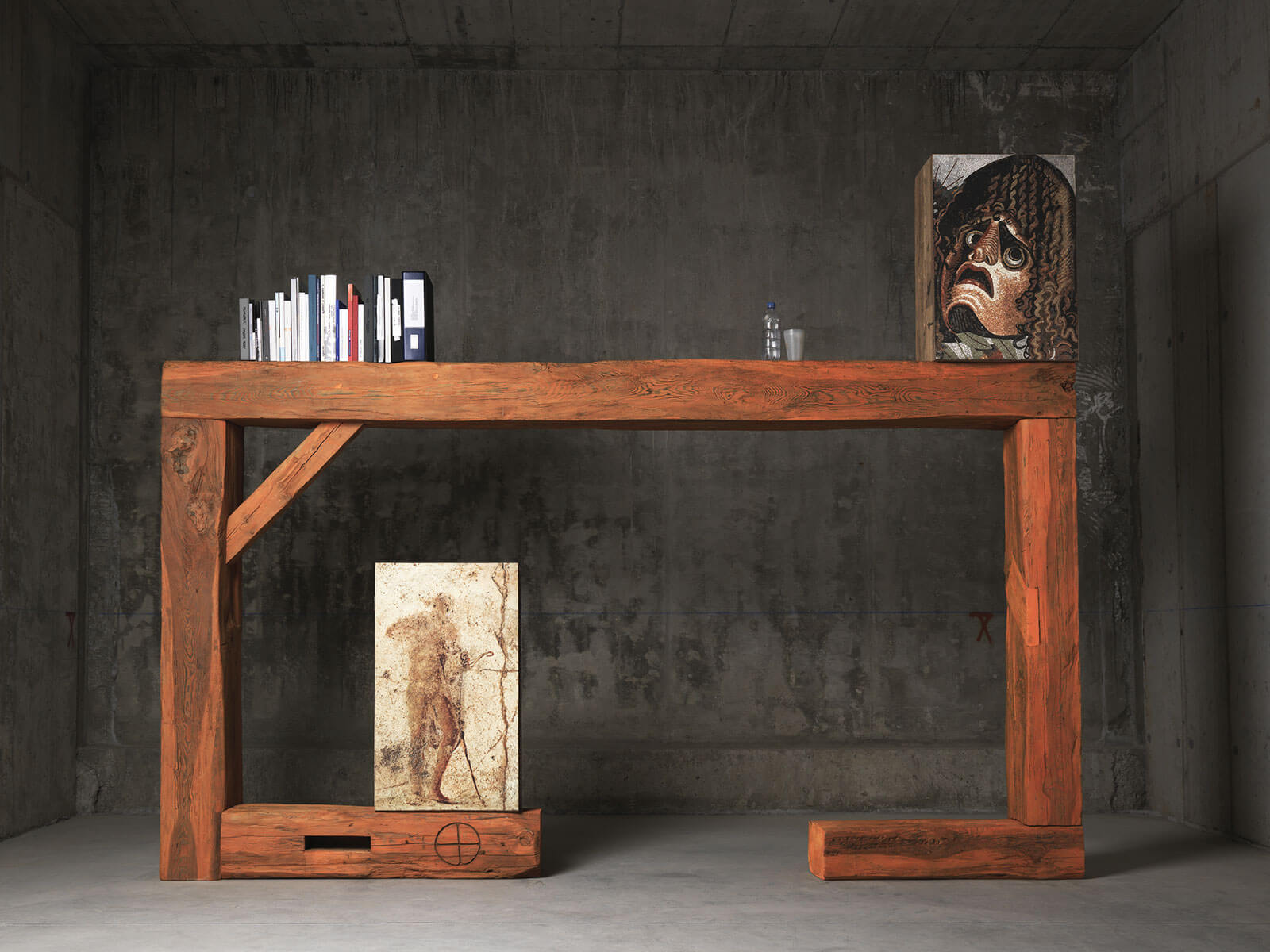 The gallery Eredi Marelli based in Cantù, exhibited the works of Angelo Mangiarotti and the architect Ernesto N. Rogers (from the BBPR studio and former editor of Domus). The designers worked together but also shared a passion for Italian artisanal work. Eredi Marelli’s booth brought forward the important relationship between the workers and the artisans. On one corner of the stand stood a rare and splendid table by Rogers (only two examples are currently known) executed in 1955 by Piero Frigerio in Cantù and reminiscent of the Velasca Tower built the previous year. 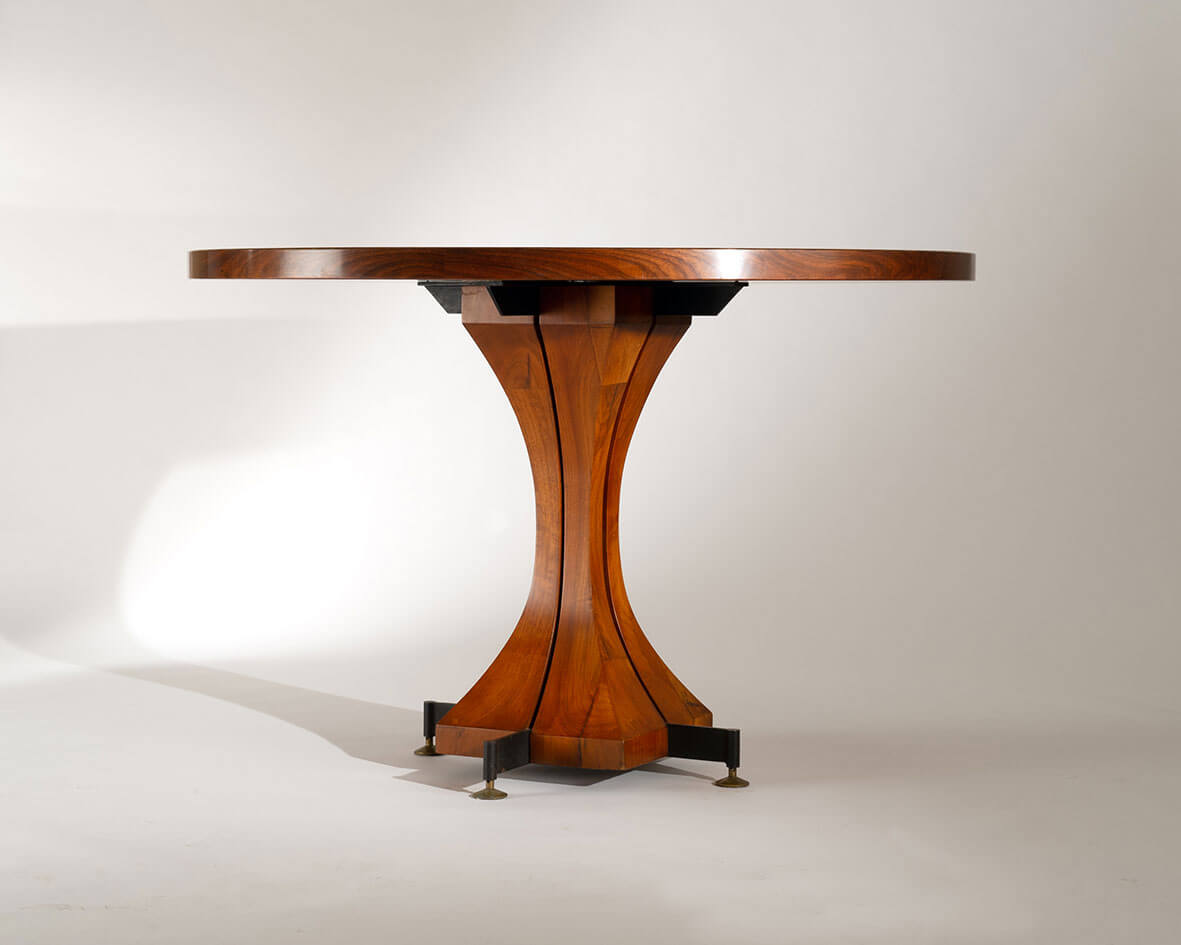 Mangiarotti’s work was represented by two rare wooden sculptures made with Arquati, an alabaster vase made in Volterra, and rare ceramics produced by Danese Milano. 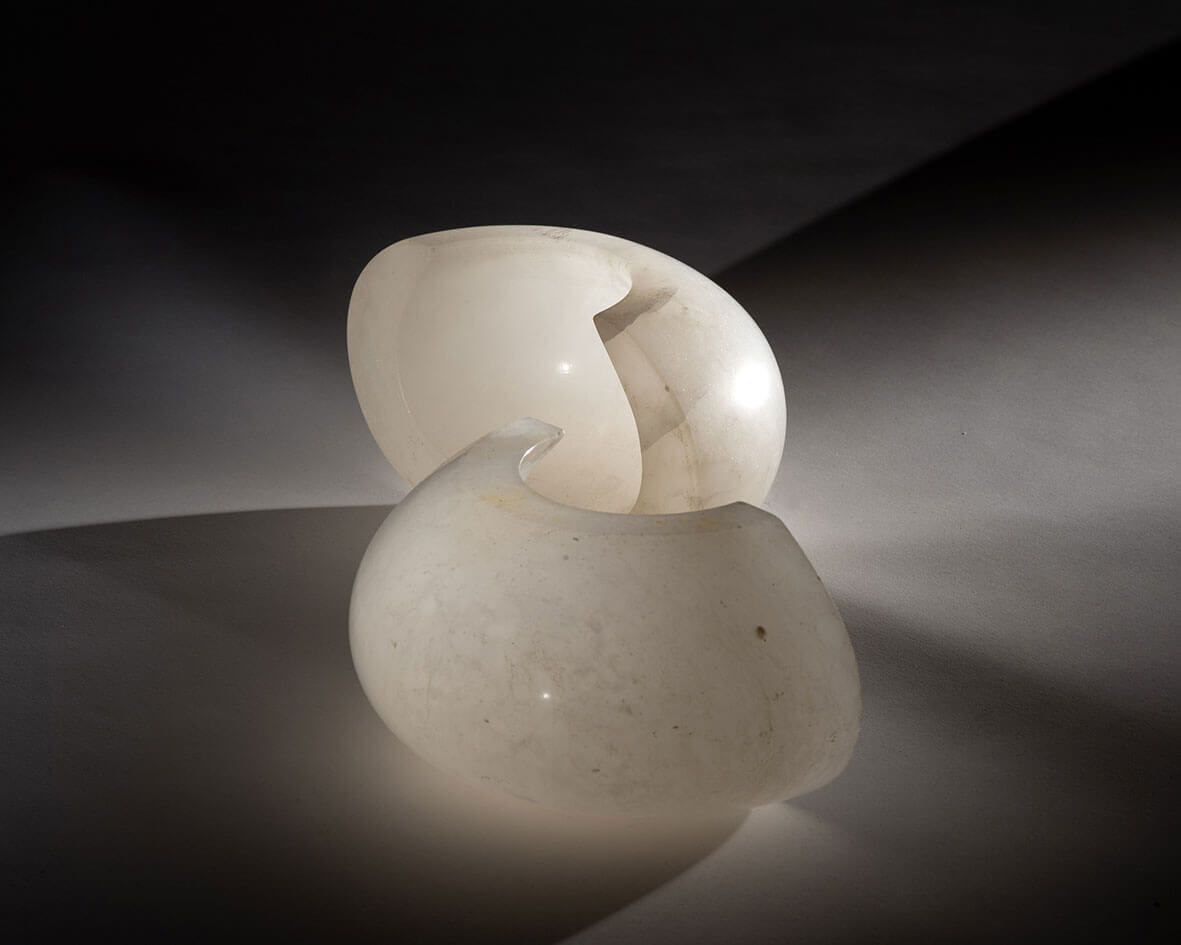 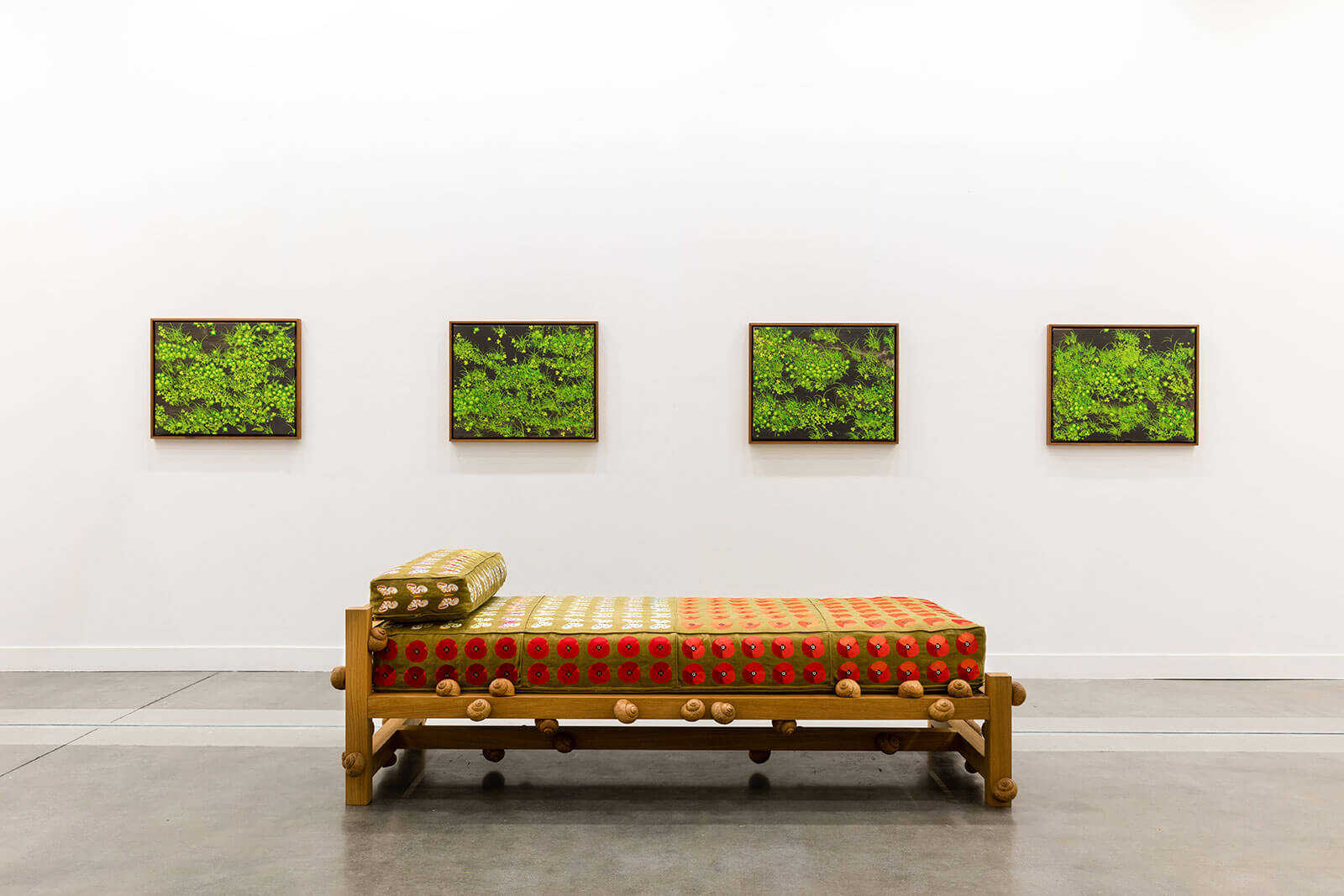 The witty design works, with carved snails and embroidered insects, perfectly responded to the bright and lively watercolours, creating an enchanting and slightly surrealist refuge in the fair. 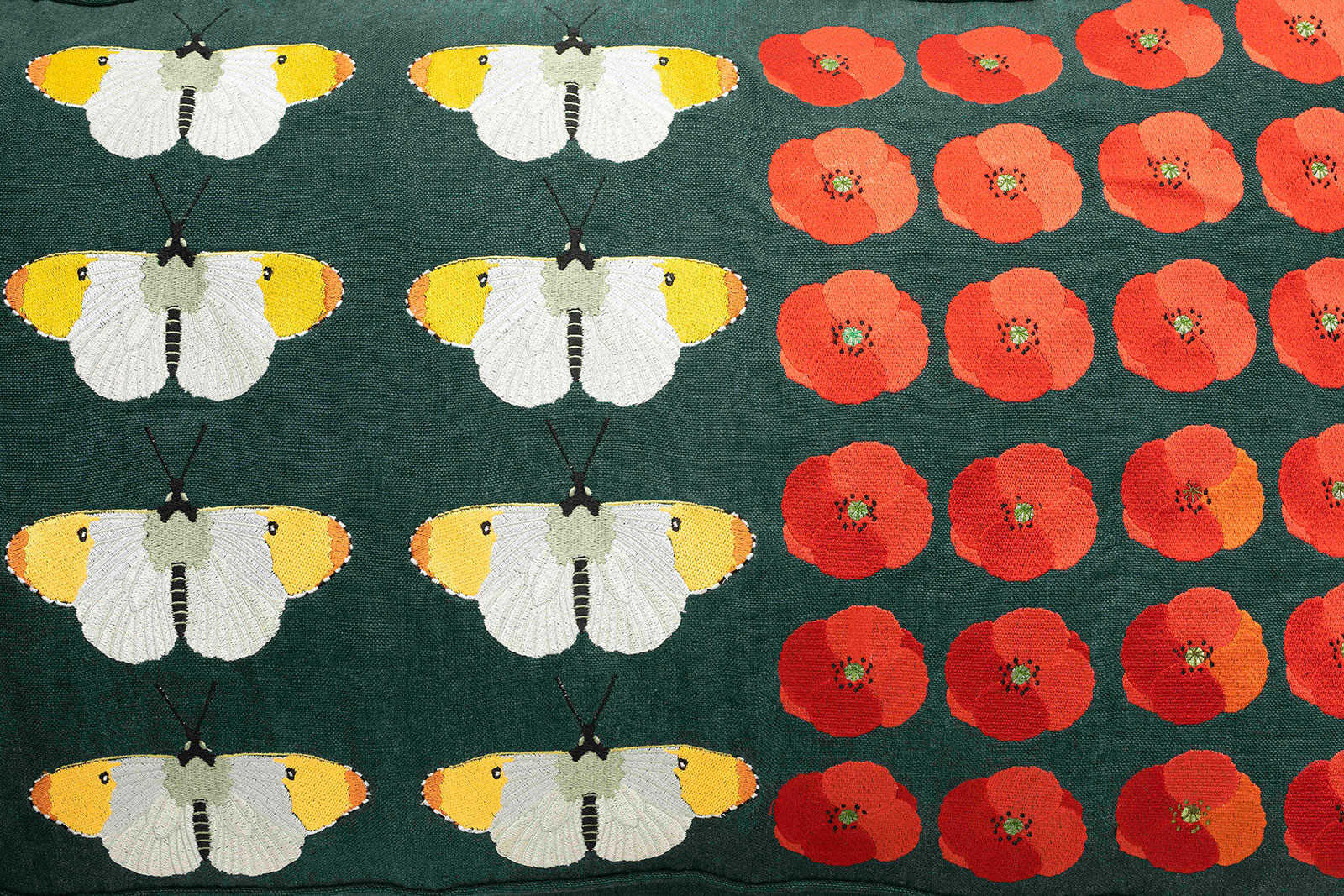 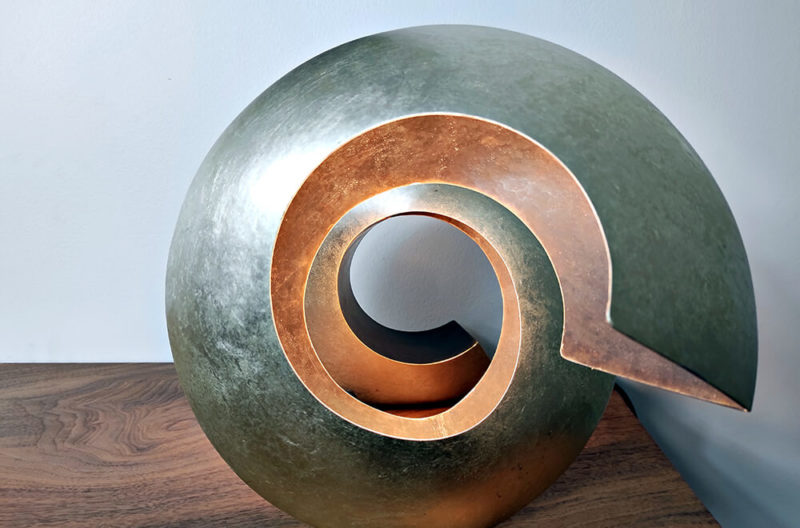 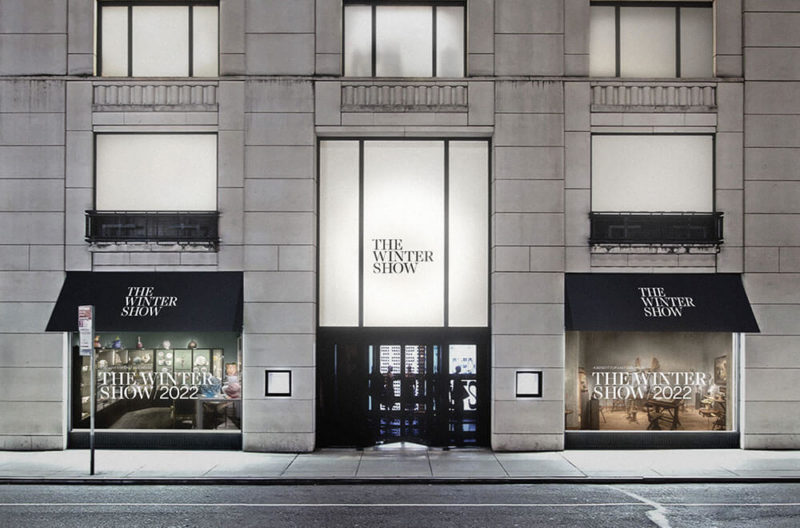 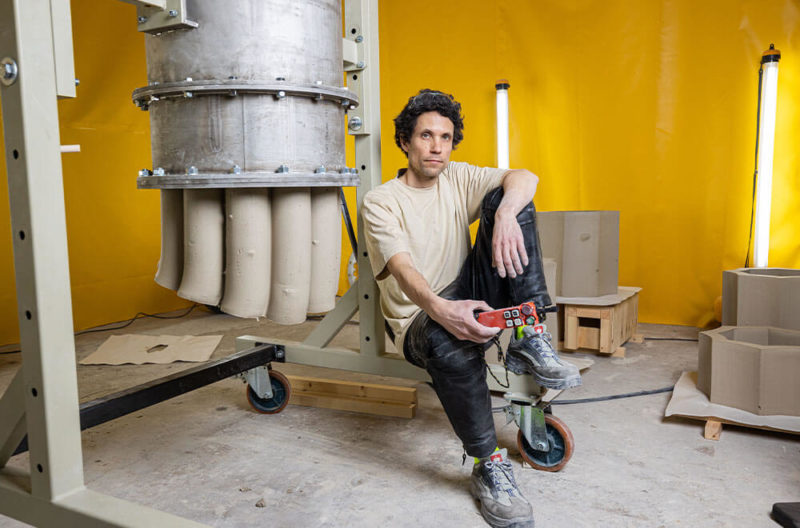 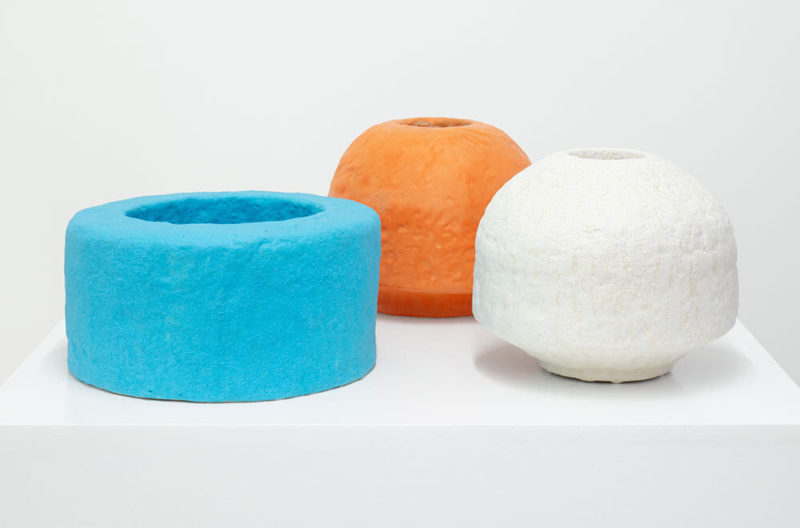