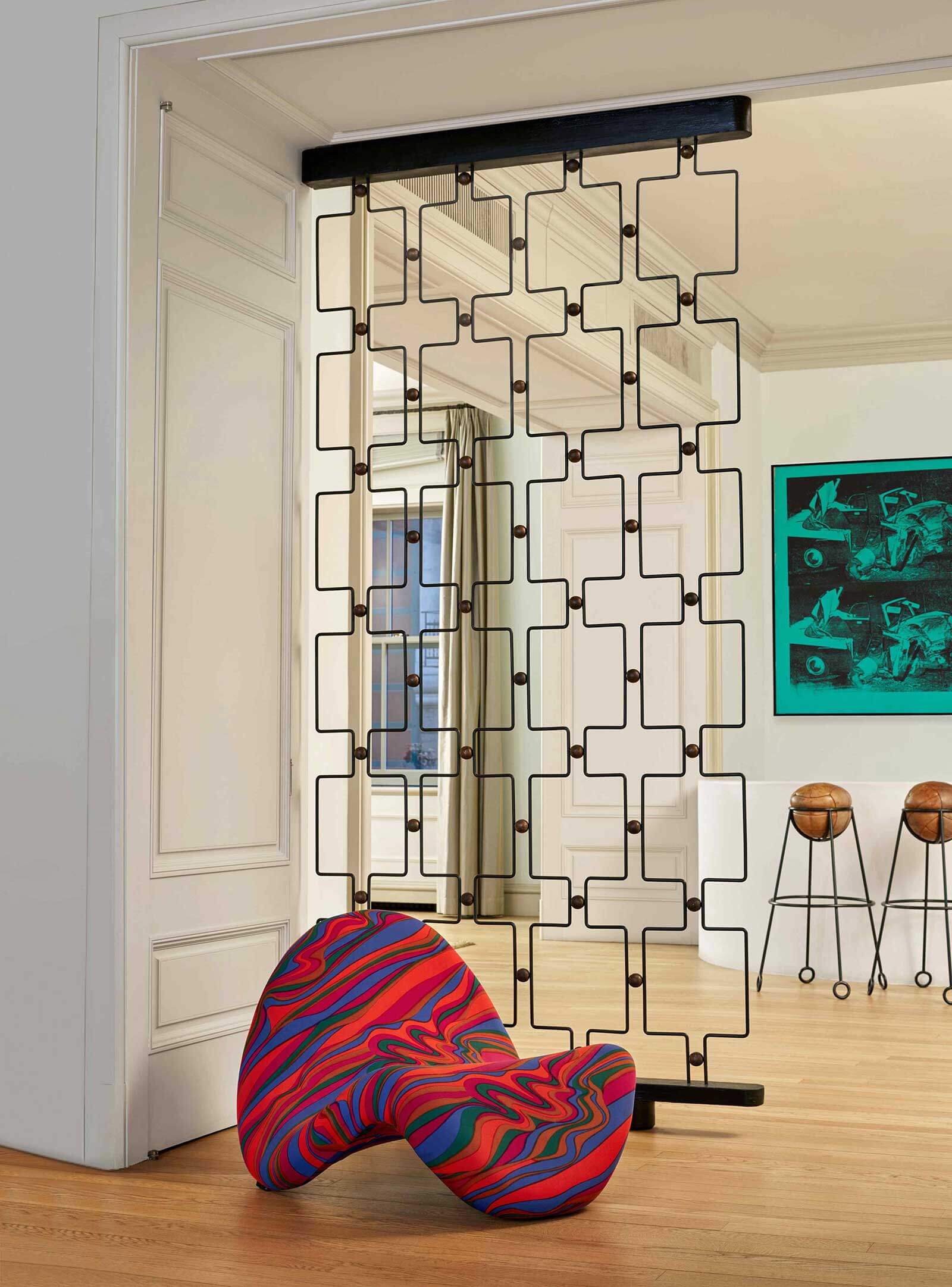 IT’S DECEMBER AND the last race for design masterpieces in 2021 has started in New York. Paddles warmed up at Sotheby’s on 7th December, where 24 sound sculptures by Harry Bertoia from the legendary Sonambient Barn were auctioned. The white glove sale totalled €6,045,760 (hammer total €4,795,739.60) against a total high estimate of €2,155,000. 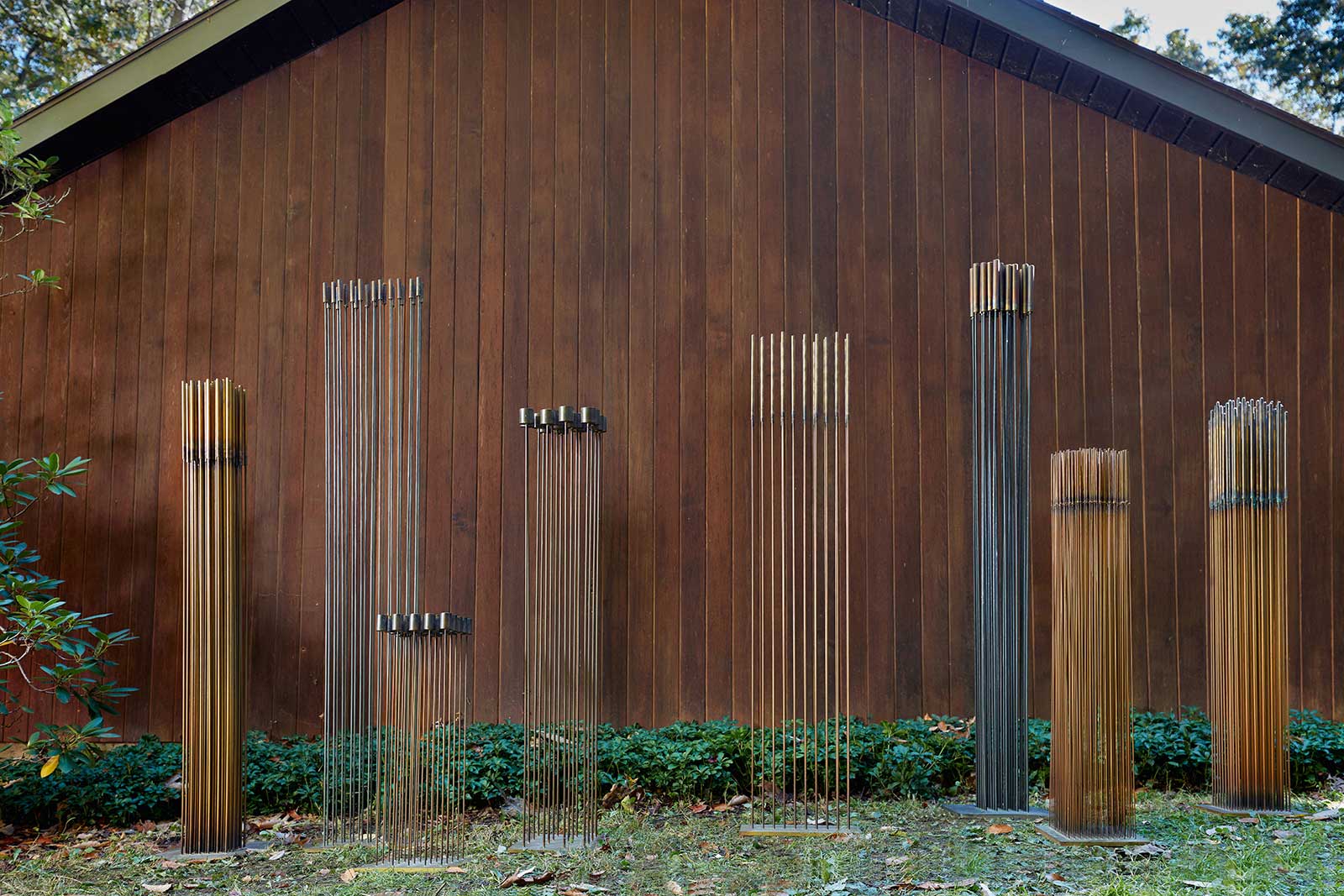 The beautiful auction catalogue explains how Bertoia was inspired to add a sound dimension to his sculptures in 1959-1960. He had been working with some industrial metal rods, when one suddenly bent and made a sound that intrigued him. Following this event, Bertoia spent the next decade experimenting with the geometry of the sculpture bases, the movement of the rods and the cap sizes at the end of the rods. The results are poetic – the splendid kinetic sculptures act as gongs, creating a complex wash of sound composed of many tones that are close in pitch and timbre. In the late 1960s, Bertoia renovated an 18th century outhouse to gather and store his sound sculpture, this was known as the ‘Sonambient Barn’. 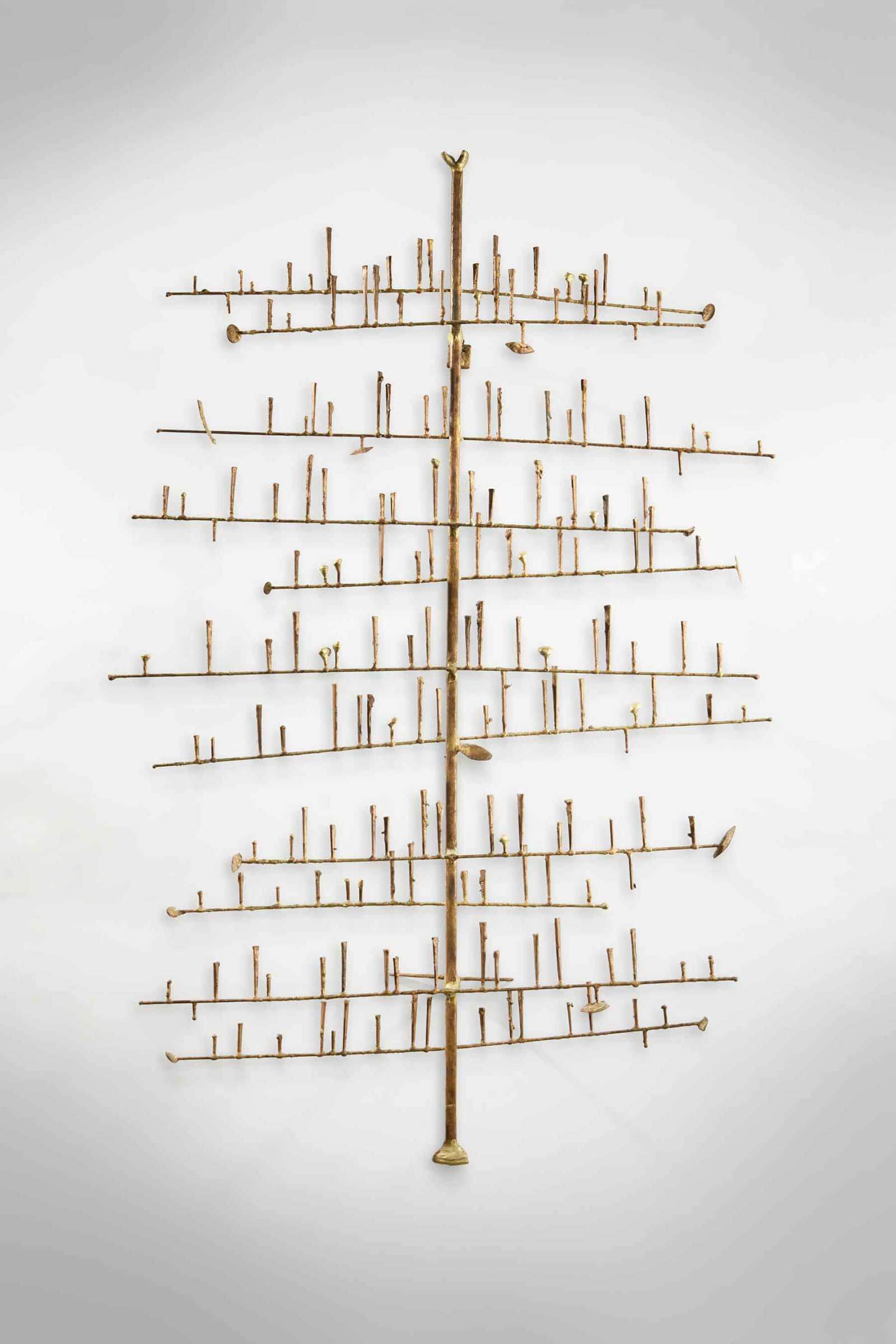 Works by Harry Bertoia will remain in the eye of collectors as Sotheby’s will also offer an early Bertoia wall construction commissioned by the architect Donald E. Hatch for his Caracas home (Lot 205, estimate $80,000-120,000. Sold for $81,900).

The Christie’s sale will also feature five outstanding lots by Harry Bertoia from the personal collection of Florence Knoll Bassett. Florence and Harry studied together at the University of Cranbrook and developed a lasting friendship and work collaboration. 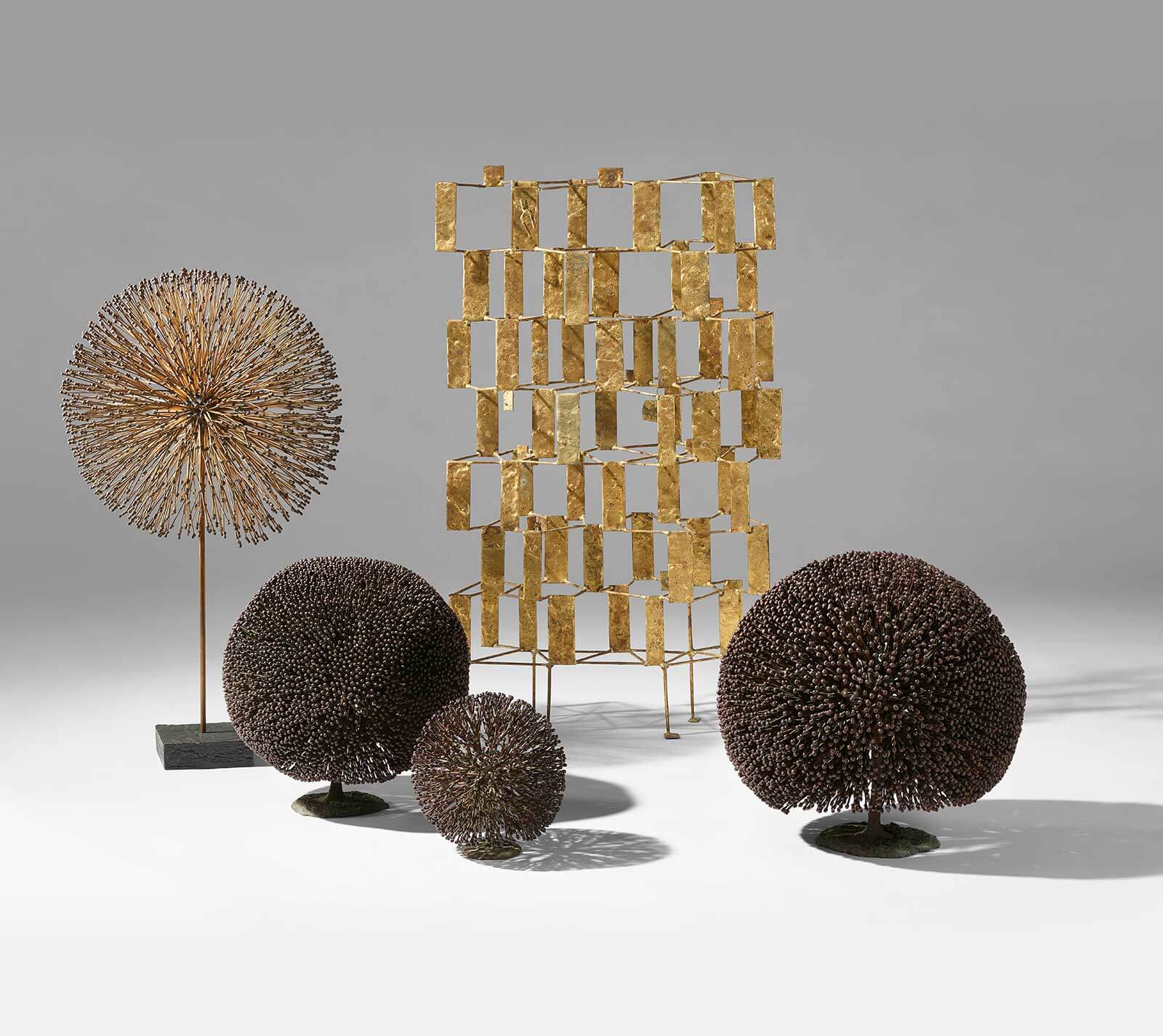 Many heads will also turn towards the collection of Peter Brant and his wife Stephanie Seymour, which will be auctioned at Sotheby’s on the 8th of December. The sale is entitled PROUVÉ X BASQUIAT – like a collaboration between luxurious brands. The catalogue opens with an interview with Mr. Brant stating simply that: “collecting is like a disease that only poverty will cure.” It is likely that none of the collectors attending that auction will be immune. 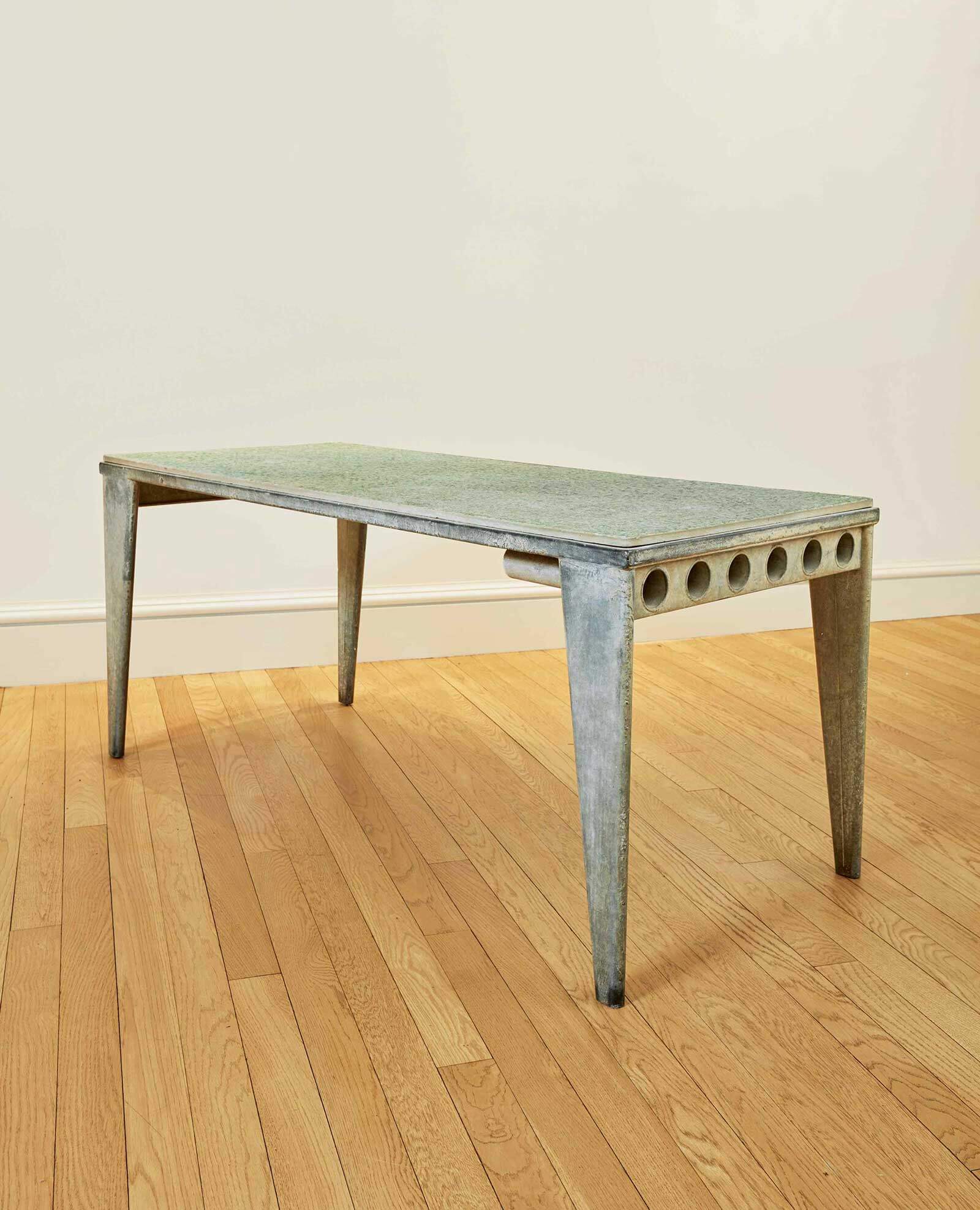 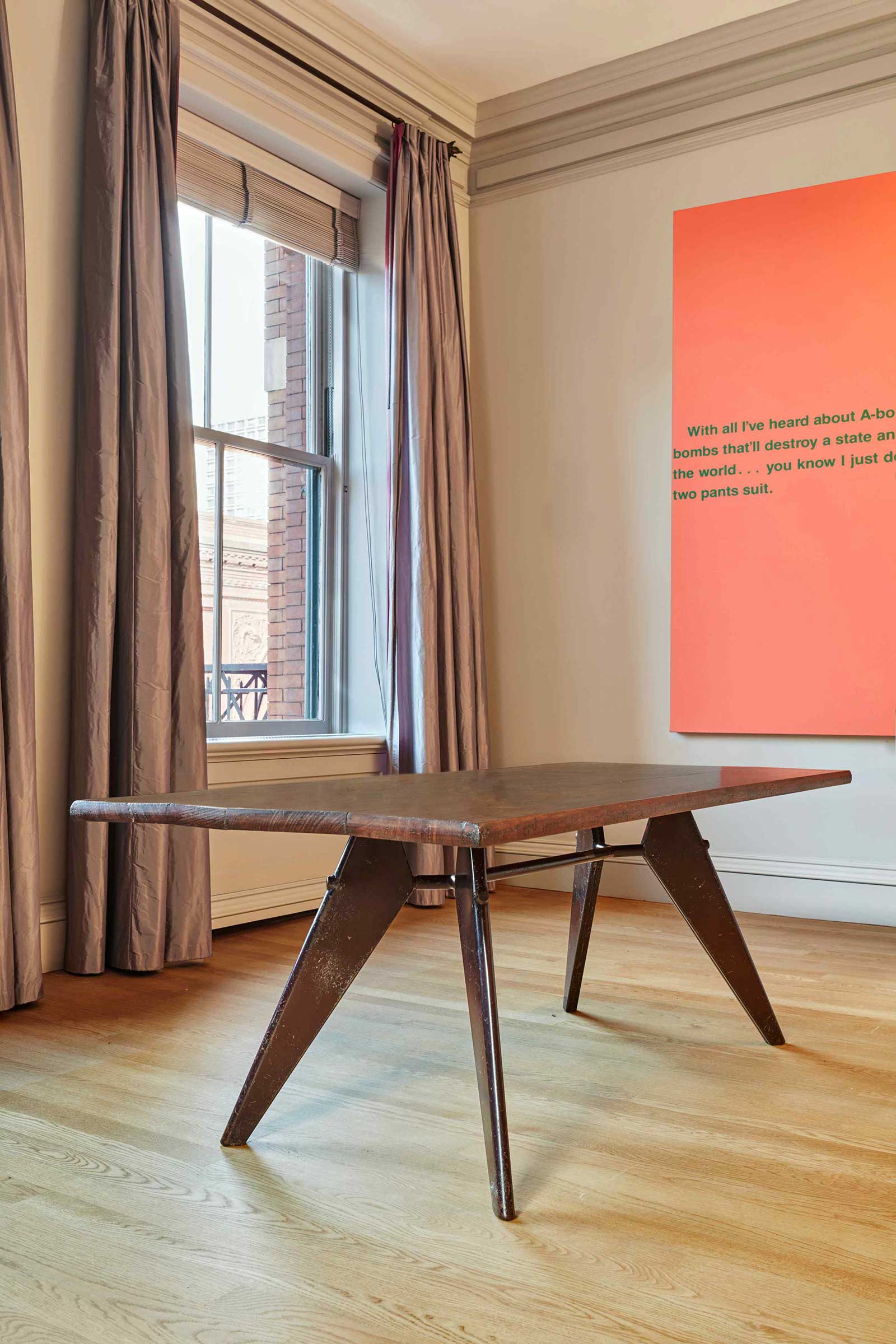 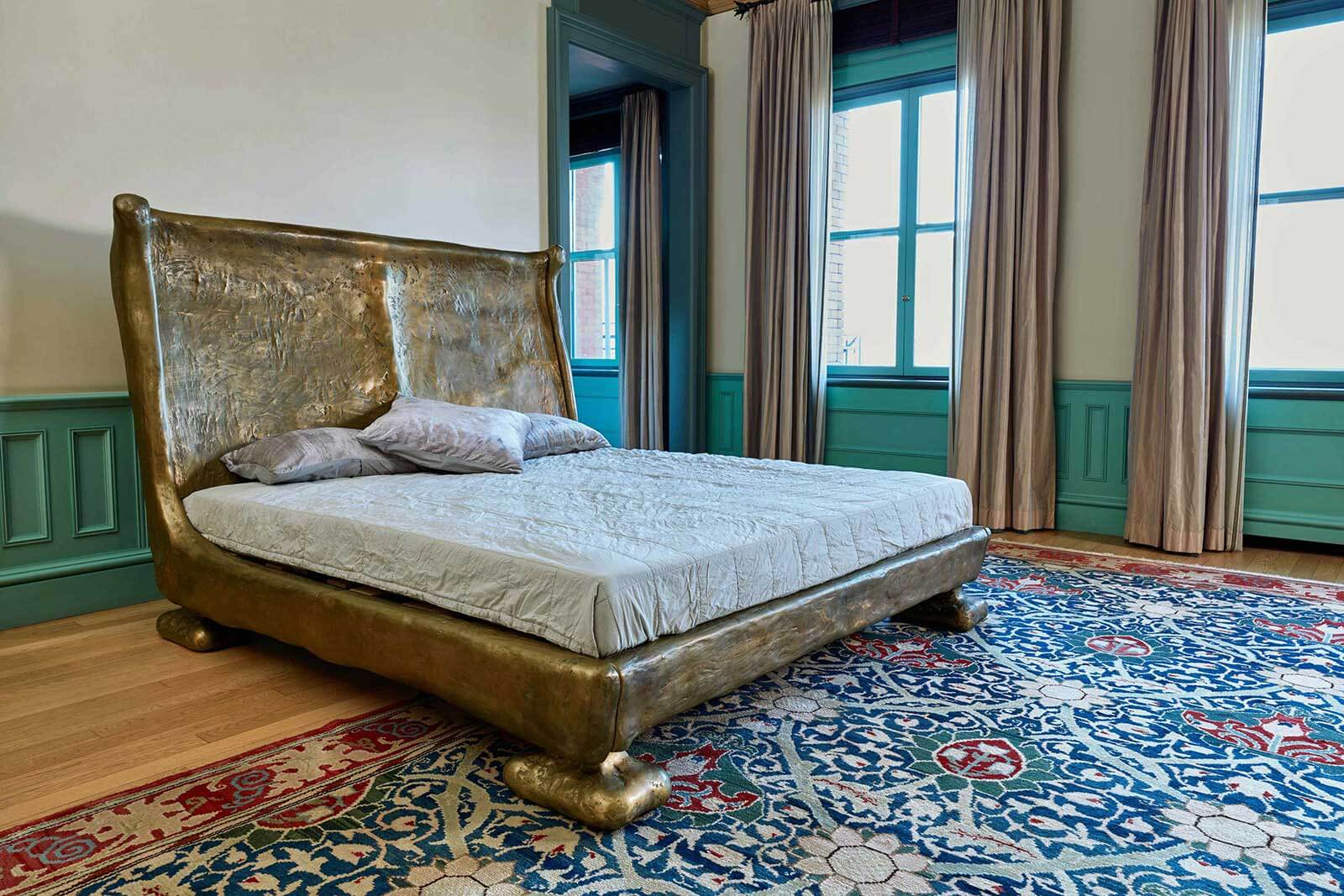 The sale also features an exceptional armchair by Carlo Mollino (Lot 65, estimate $100,000-150,000. Sold for $390,600); one of only two examples known to exist and a testament to his extraordinary artistic vision. “The structure of the armchair is characterised by a sinuous collaboration of seat, back and wood elements. Only the armrest is granted a masterfully sculpted organic shape that comforts and embraces the human body. The piece simultaneously emanates an air of serene order and snappy dynamic tension characteristic of Carlo Mollino’s very best designs” explained Fulvio and Napoleone Ferrari, founders and curators of Museo Casa Mollino in Turin, in the catalogue note. 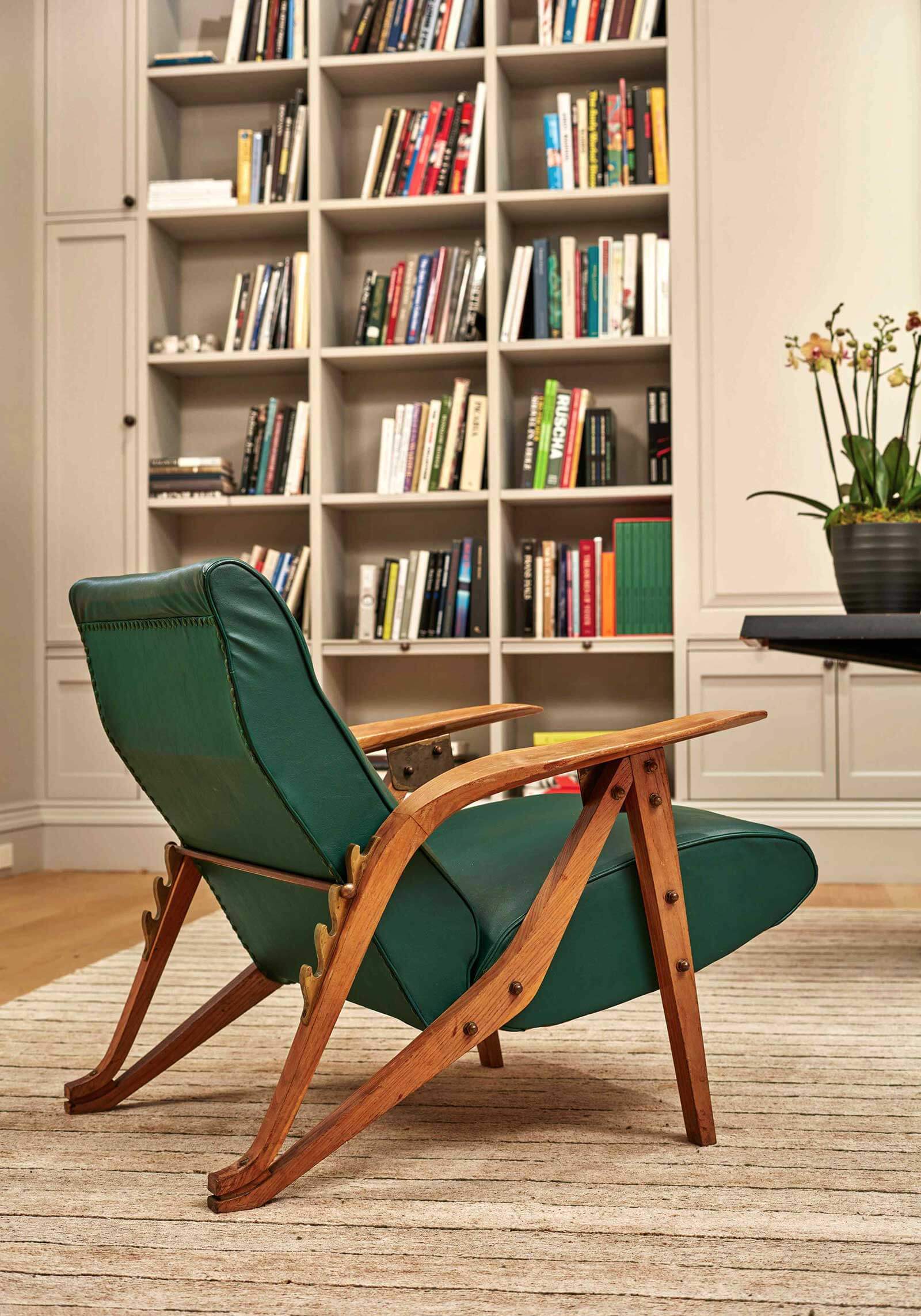 Mollino is one of Italy’s most influential mid-20th century designers and most likely one of the most expensive. Jean Royère is well represented in this sale and the yellow ‘polar bear’ sofa and armchairs won’t fail to attract the collectors attention. 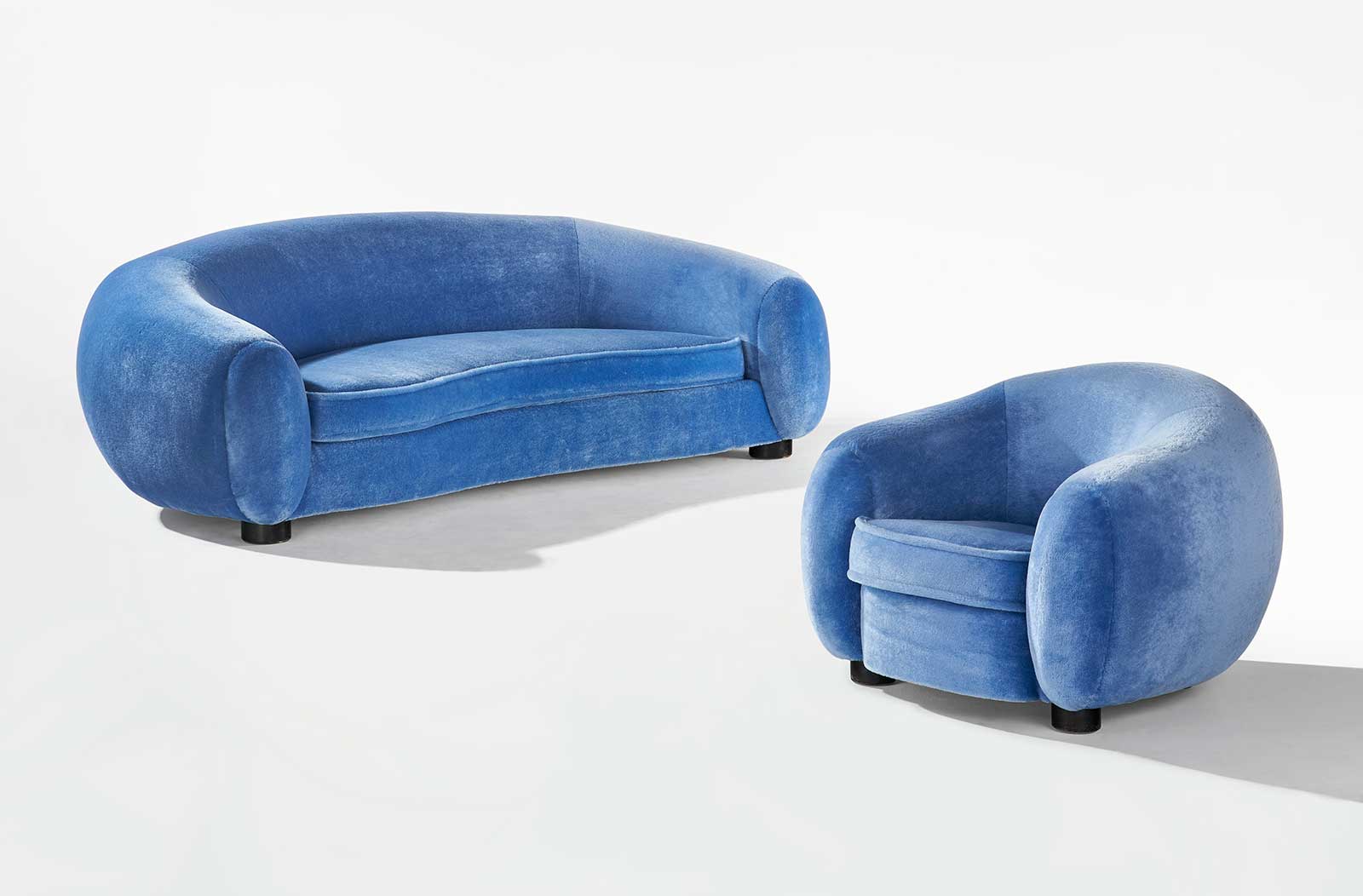 According to the provenance they most likely did not start their life together. The works by Jean Royère were all acquired before 2000, so it will be interesting to see how collectors react to less straightforward provenances coupled with high estimates. 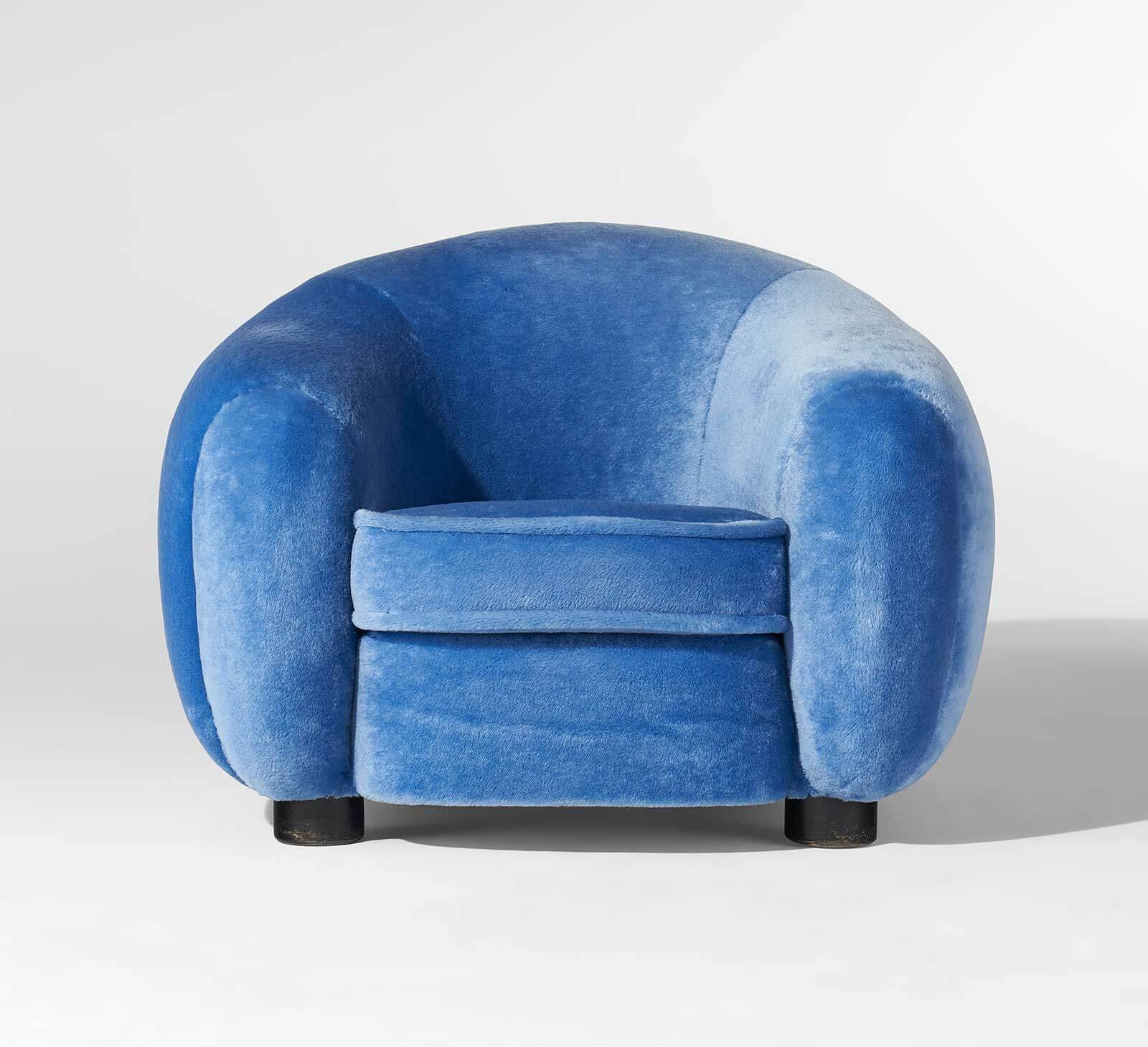 Unsurprisingly, both auction houses have anchored their various owners’ sales with works by Lalanne and Giacometti. Christie’s will be offering a beautiful ‘Lampe coupe deux figures’ by Alberto Giacometti, circa 1950, which comes from the dealer Pierre Matisse who championed the American career of Giacometti (Lot 10, estimate $800,000-1,200,000. Sold for $930,000). This model of lamp has appeared at auction before and sold for over a million dollars in 2019 (Christie’s Zurich, Swiss Art sale, 17th September, 2019, Lot 86, sold for $1,078,984), but has never been estimated so high. 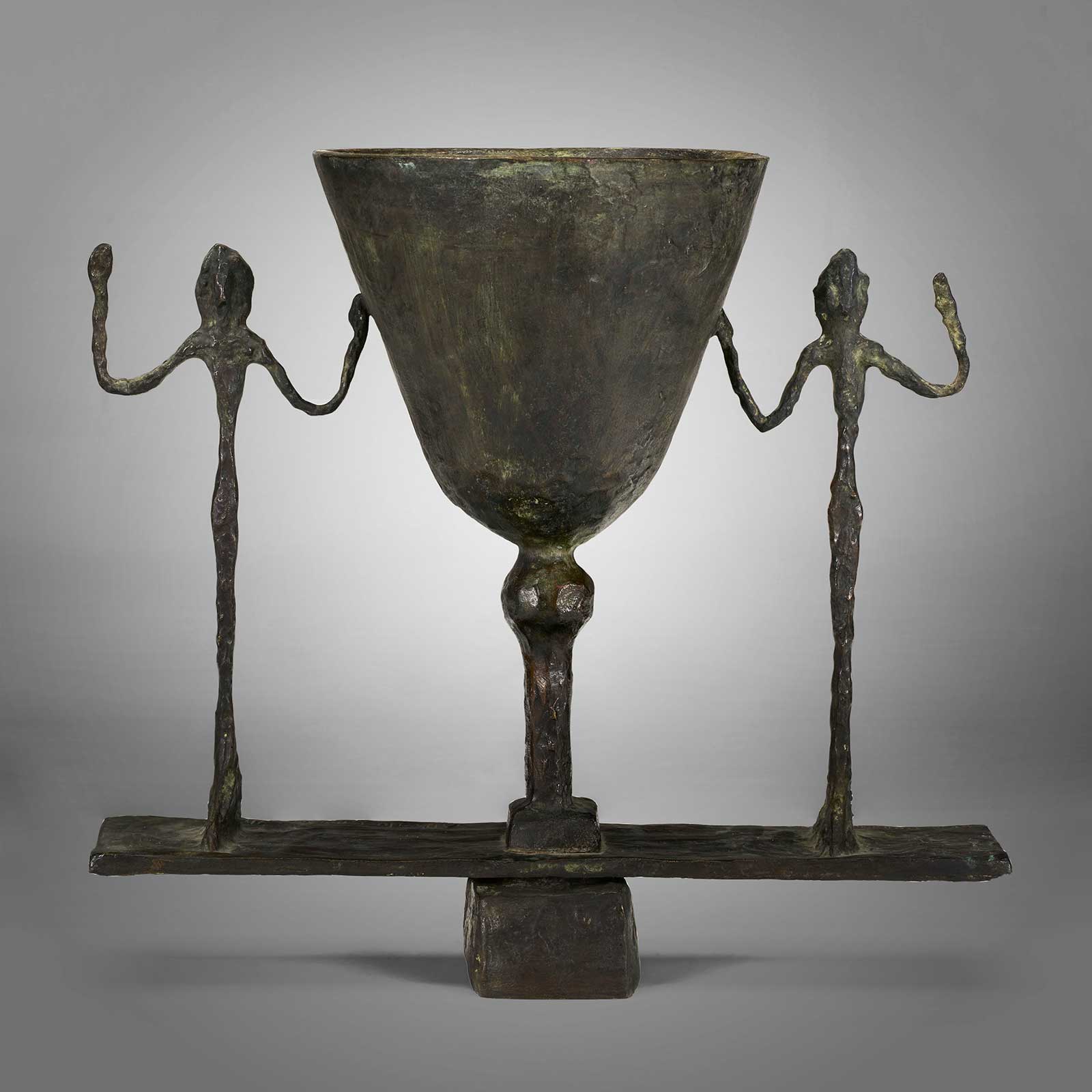 Sotheby’s will offer a breathtaking console designed by Diego Giacometti in memory of the symbolist painter Arnold Böcklin (Lot 118, estimate $1,000,000-1,500,000, sold for $6,813,300). This piece is an outstanding example of the designer’s sense of composition and exhibits a masterful use of diverse patina – from the gold disc, to the shades of teal visible on the trees, to the dark russet brown hues on the owl – adding depth and enhancing the figurative elements in the composition. 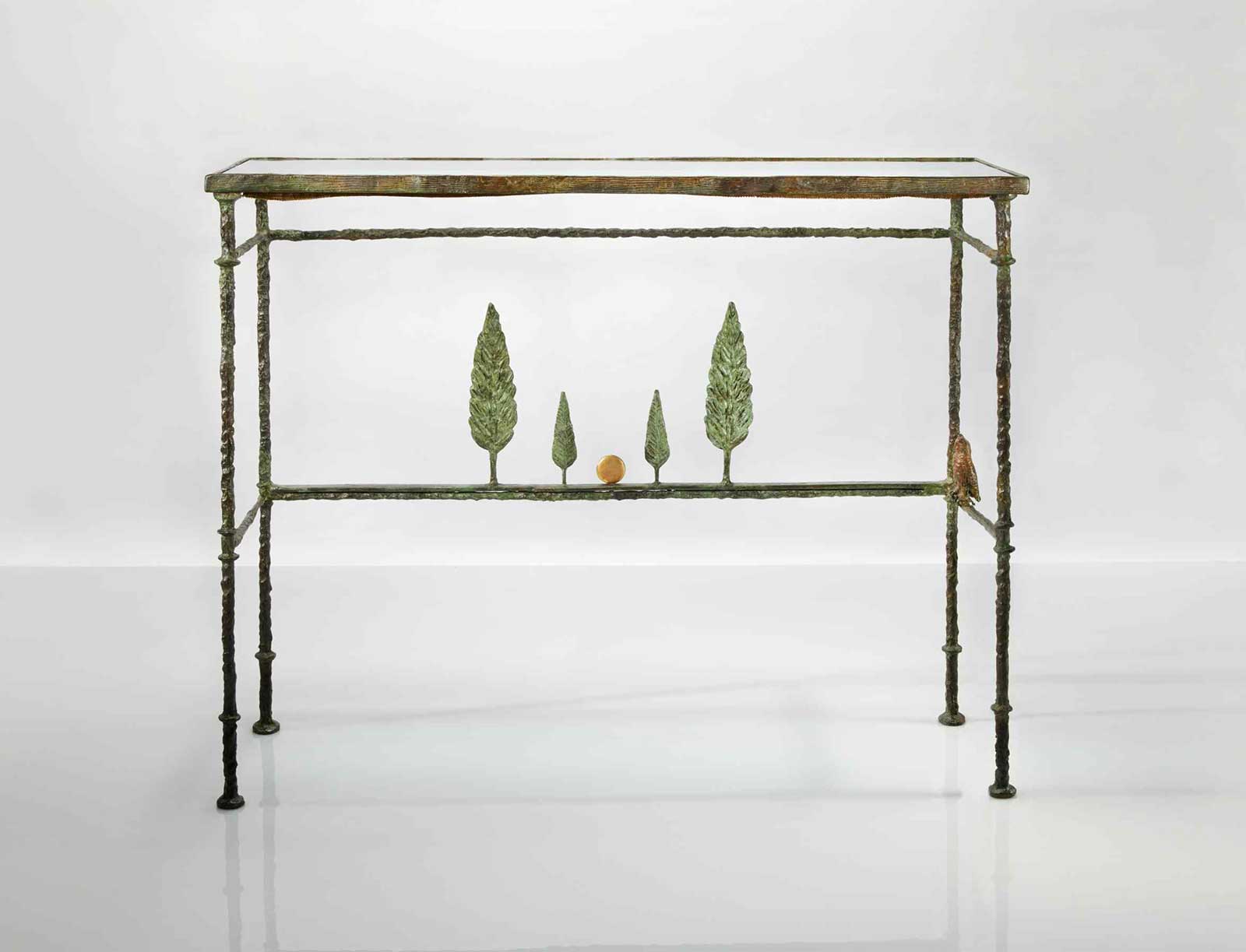 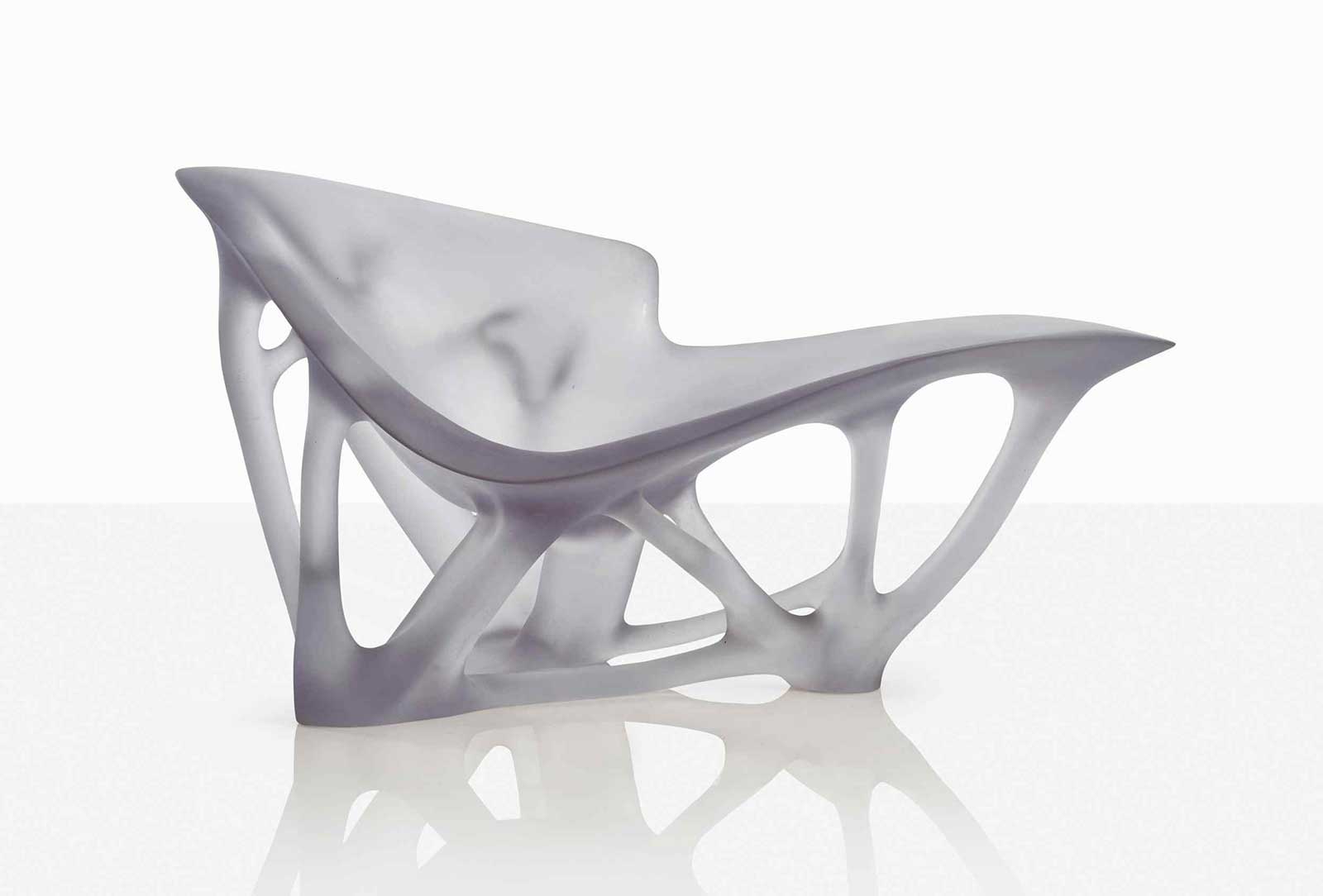 Sotheby’s other highlights include the ‘Bone’ chair by Joris Laarman, an unparalleled opportunity for collectors to acquire an icon of contemporary design (Lot 164, estimate $350,000-550,000, sold for $352,800), as well as the ‘Floor Lamp’ by Wendell Castle (Lot 209, estimate $250,000-350,000, unsold). In his enlightening essay Glenn Adamson highlights “the opportunity to encounter Castle’s sculptural idiom face to face, as it were, the object greeting your own upright form” – as the artist rarely designed vertical works. 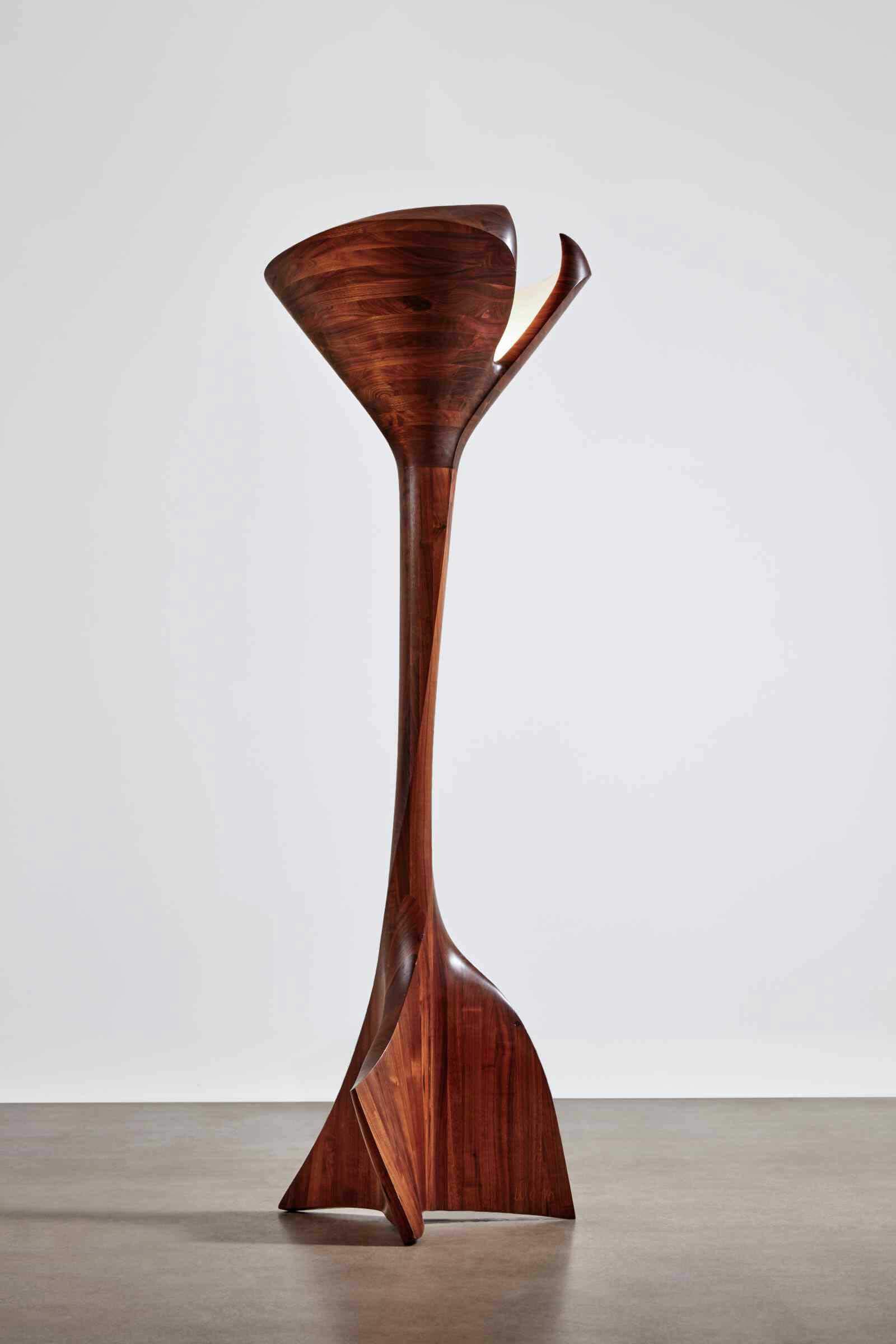 Despite the competition, the best in show for historical design seems likely to go to Christie’s for its important Art Deco ‘Desk and two chairs’ by André Groult (Lot 70, estimate $500,000-700,000, sold for $930,000). An outstanding example of the designer’s distinctive sense of luxury and modern use of line. 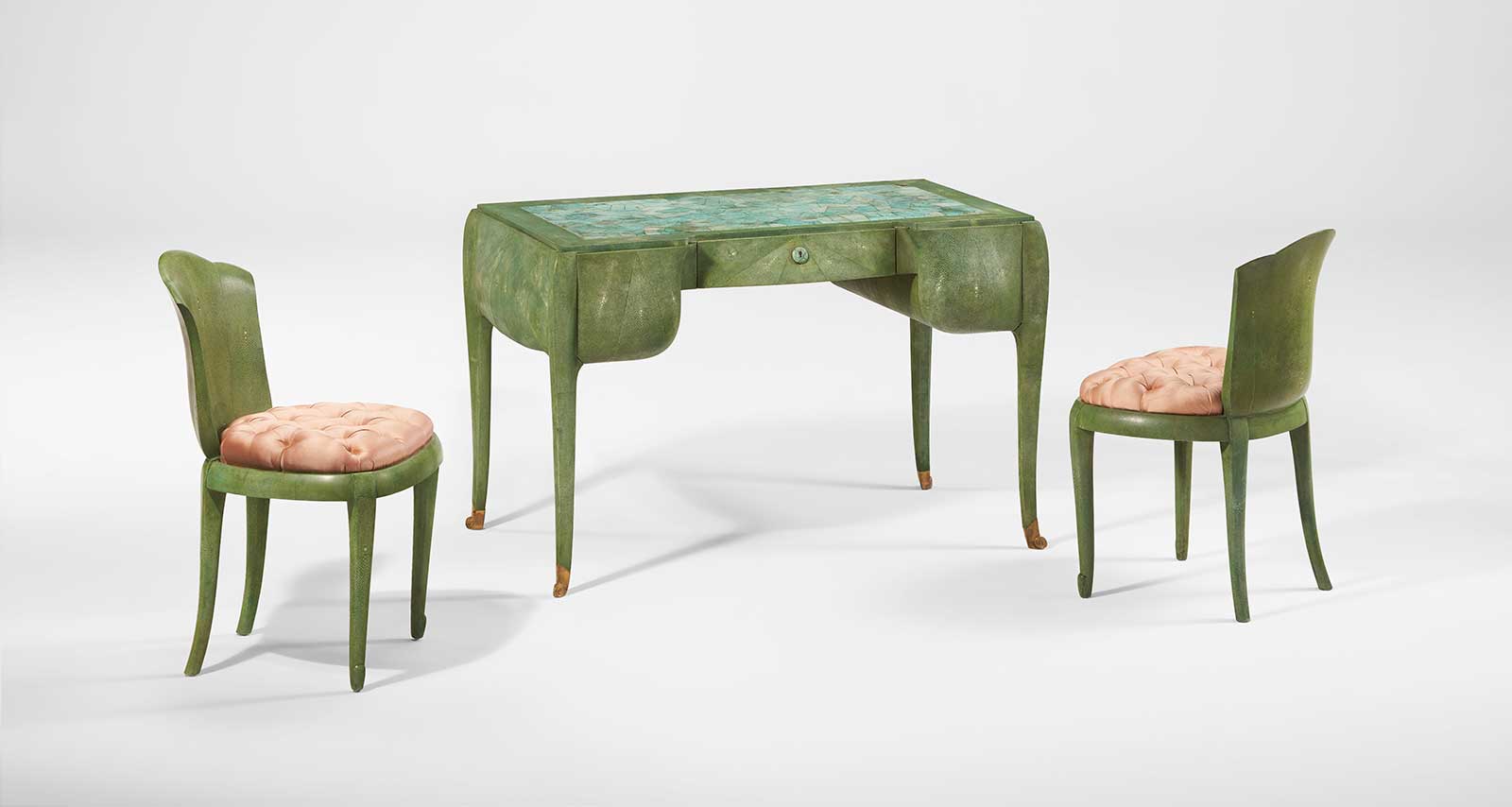 Covering his creations in galuchat (ray skin) was one of the artist’s signatures – made famous by the interpretation of a ‘Lady’s Bedroom’ at the French Pavilion for the 1925 Exposition des Arts Décoratifs et Industriels Modernes in Paris. This green galuchat (shagreen) ensemble is part of a private commission made in Paris that comprised a jewellery cabinet, a commode (sold by Sotheby’s New York in 2016 for €1,452,500) and the present desk and chairs. 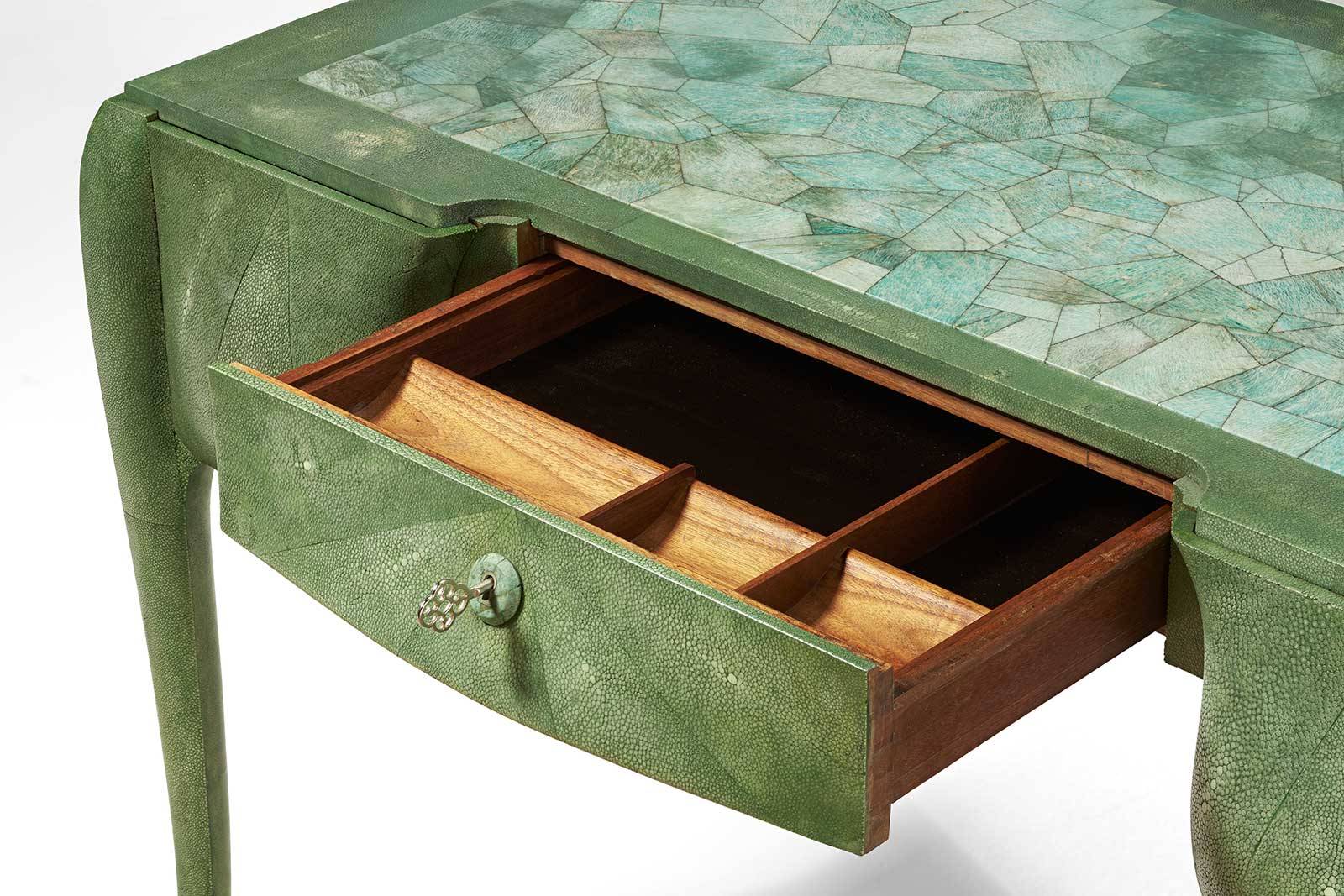 The extreme skill and patience required from cabinetmakers Chanaux and Pelletier in order to apply the shagreen on the mahogany body in such mesmerising and intricate geometric patterns is evident. The desktop is adorned with amazonite gemstones – most likely echoing the Columbian masks that were a source of inspiration in the 1920s. André Groult’s creations are known for their originality and his anthropomorphic lines have been a continuous source of inspiration (Marc Newson’s ‘Pod of Drawers’ immediately springs to mind). This lot could very well be a candidate for a new record by the artist. 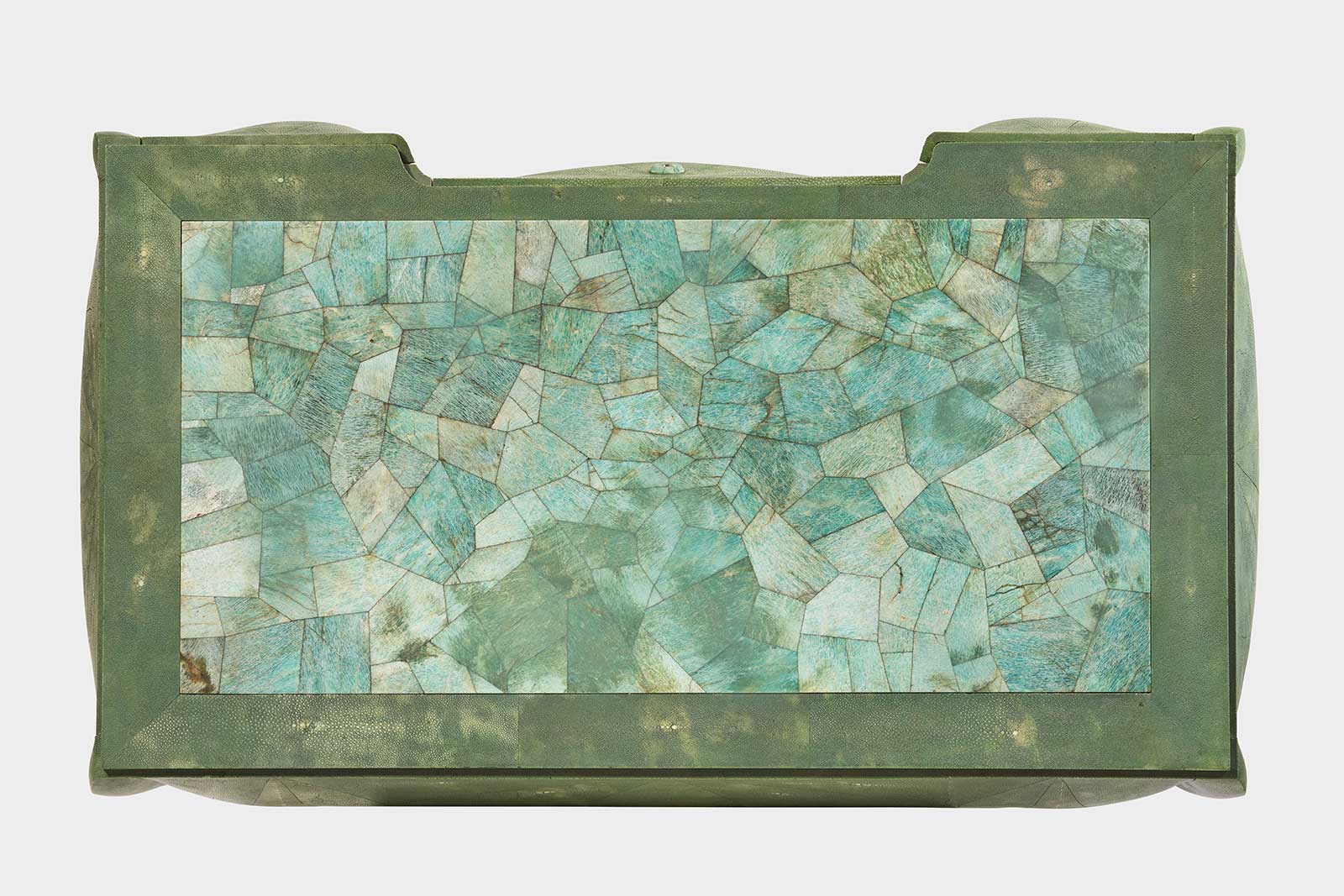 Overall, the quality of the sales is astonishing. It will be interesting to see what the collectors will fight for, especially after such a year rich in prestigious private collections.

In any case, one must commend the work of the auction houses specialists who work relentlessly to make these sales happen, and coordinate the photography, research and marketing in a very short space of time. The catalogues created by Sotheby’s will most likely remain as references. 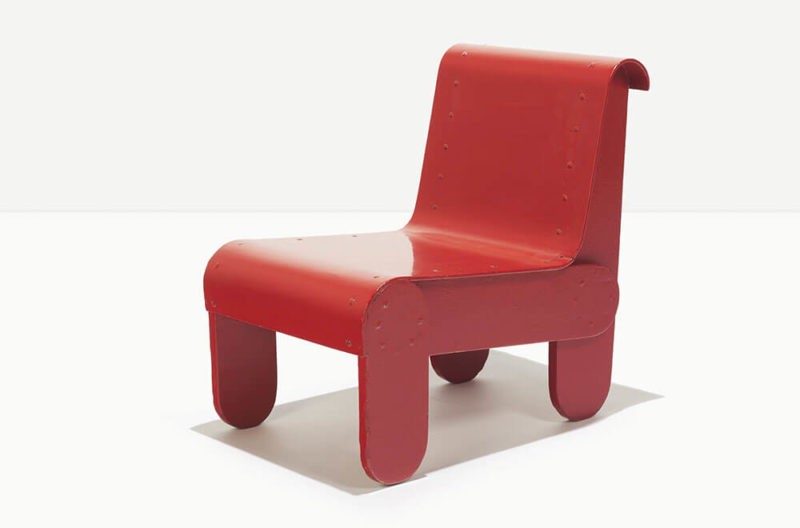 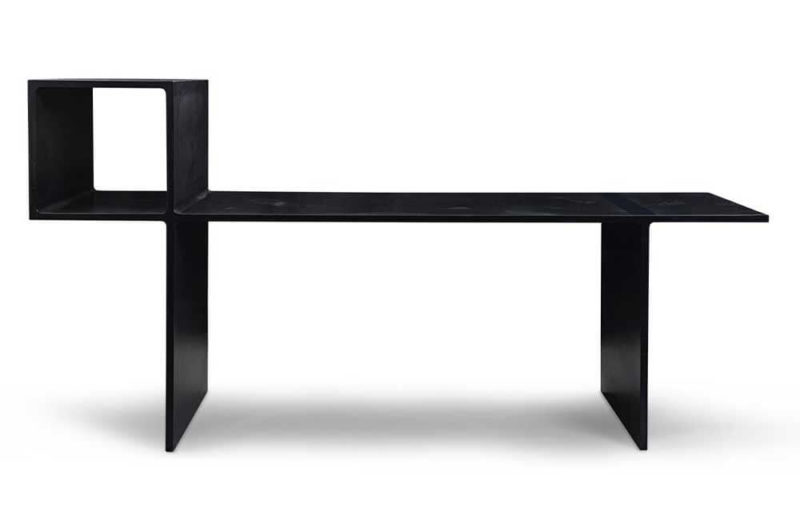 SALE PREVIEW / Karl Lagerfeld’s Estate: From dumbbells to drawings, TDE picks highlights from the forthcoming sales of 'The Kaiser'. 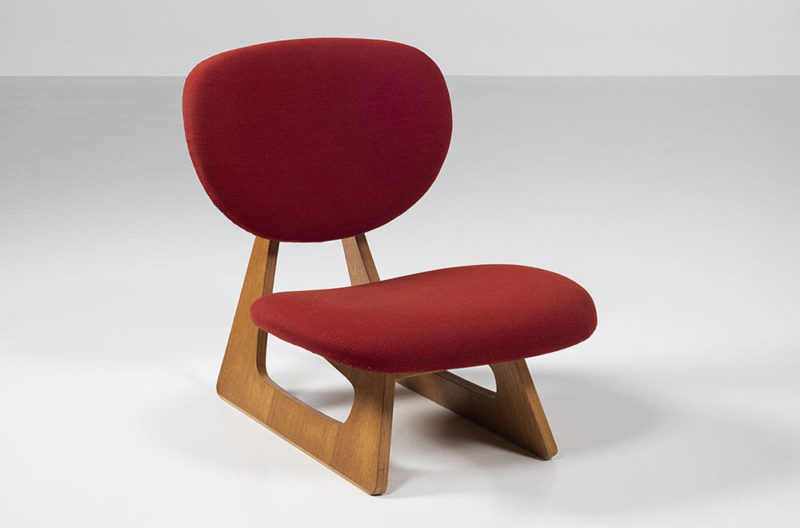 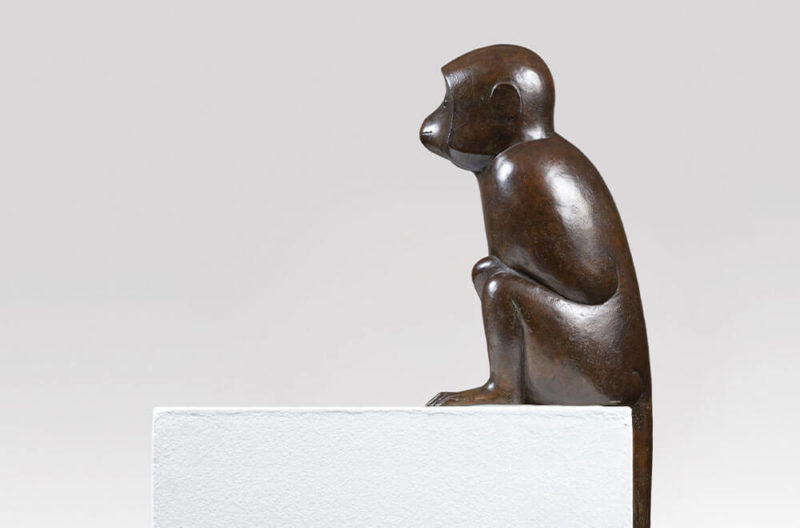