THIS SHIMMERING SHAWL, with its bright yellow hue, calls to mind the sun, gold and Chinese Emperors, whilst giving the impression of great age. The revelation about this piece, however, on view at Oliver Hoare Ltd, is that it’s brand new and made from an un-dyed naturally-occurring material – spider silk. Handwoven in Madagascar from the protein fibre milked from millions of female Golden Orb spiders, this fabric is the culmination of a twenty year project, driven by a dream to achieve the impossible.

The indefatigable designer behind the piece is Simon Peers, a British art historian and textile expert. Ever since he settled in Madagascar, thirty-odd years ago, he has been fascinated by the indigenous textile tradition. The island, lying off the coast of East Africa, has always been the natural trading hub of the Indian Ocean, and so its peoples and culture are a unique blend of South-East Asian and East African. Peers noticed that whilst many international museums had collections on African or Asian textiles, the Madagascan tradition was barely covered. This prompted him to start an archive of traditional designs and motifs.

During his research Peers came upon what he thought was an apocryphal story from the late 19th century about textiles made by a French Jesuit priest from Madagascan spider silk. He followed it up and found that a bed hanging made from spider silk had indeed been shown at the 1900 Paris Exposition. For the next ten years the designer harboured the idea of making a textile from spider silk, but after a few attempts the idea lay dormant, until a meeting with American entrepreneur Nicholas Godley. Eight years later, the pair had produced four hand-woven textiles from spider silk, including this lamba.

“People’s reaction to this fabric ranges from utter disbelief, to awe and amazement,” says Peers, “Not surprisingly, the first words on people’s lips are ‘How did you do it?’” The answer, described in four sentences, sounds disarmingly simple but was an extraordinarily complex and time-consuming endeavour. Peers and Godley constructed a ‘spidery’ and enrolled eighty collectors to scour the highlands for female Golden Orb spiders. Each captured spider was then carefully ‘milked’ for her single line of silk and subsequently returned to her habitat. The silk lines of 24 spiders were carefully twisted together to make a single thread, which was wound onto a bobbin. The spider silk was then woven on a traditional loom, incorporating some of the traditional motifs that Peers had collected and studied.

“It’s such a privilege to have worked with a material no-one has really worked with before,” Peers enthuses. “Of course, it is an extreme artistic endeavour as it is not commercially viable – however, there are scientists out there, working in laboratories from Oxford to Bejing, trying to harness the properties of spider silk.” Indeed, it is referred to by some as the ‘Holy Grail of materials’ as it is more elastic than rubber and stronger than Kevlar.  As well as its practical properties, there is also a current of magic and fairytale running through the whole project: echoes of Rumpelstiltskin, combined with the symbolism of spiders and the alchemical transformation of the ephemeral to the permanent. And if that isn’t enough, there’s also the inherent properties of the spider silk that make this shawl so light, that it’s almost impossible to feel the weight of it. The only feeling is of the heat reflected back into your body. Like an invisibility cloak. 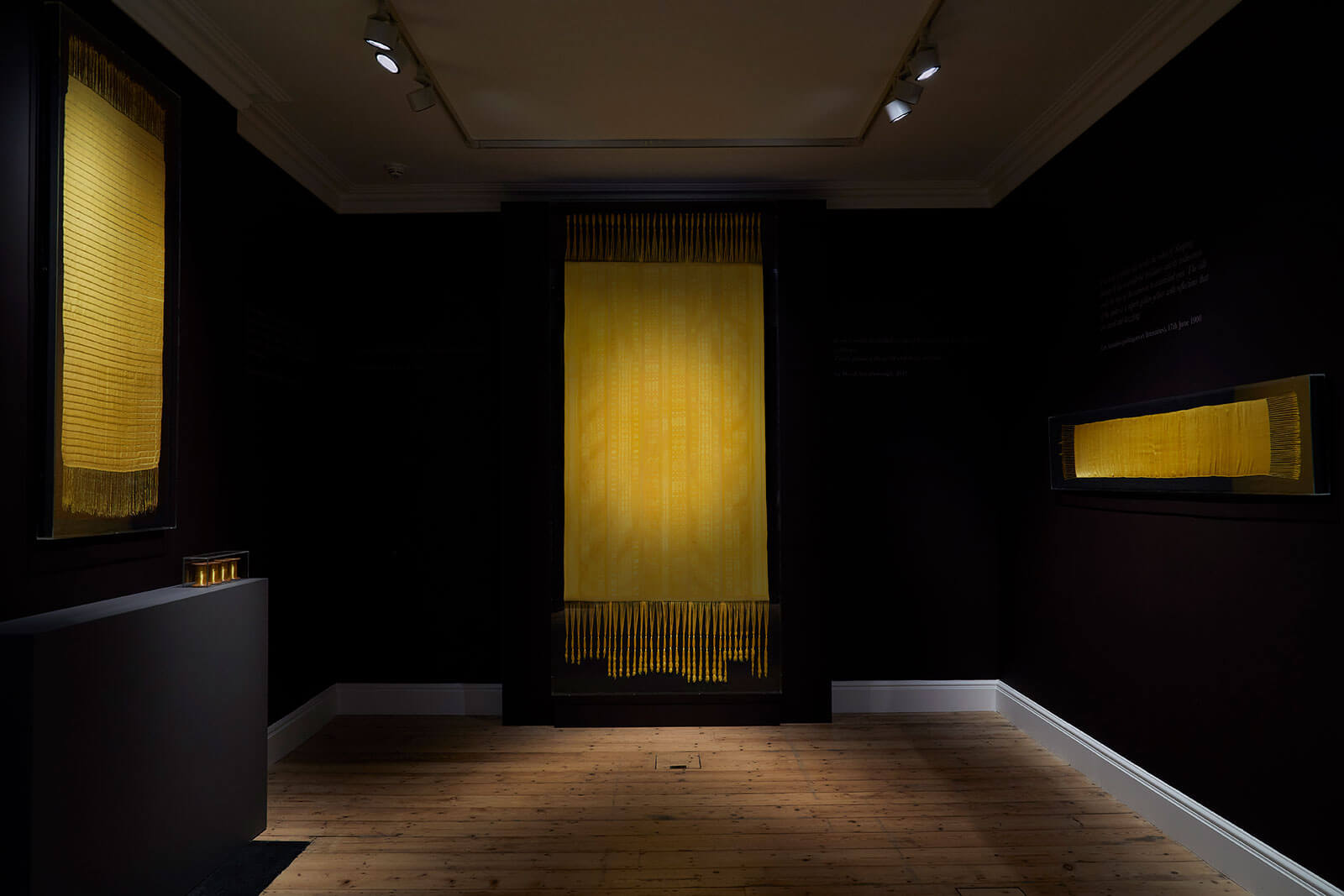 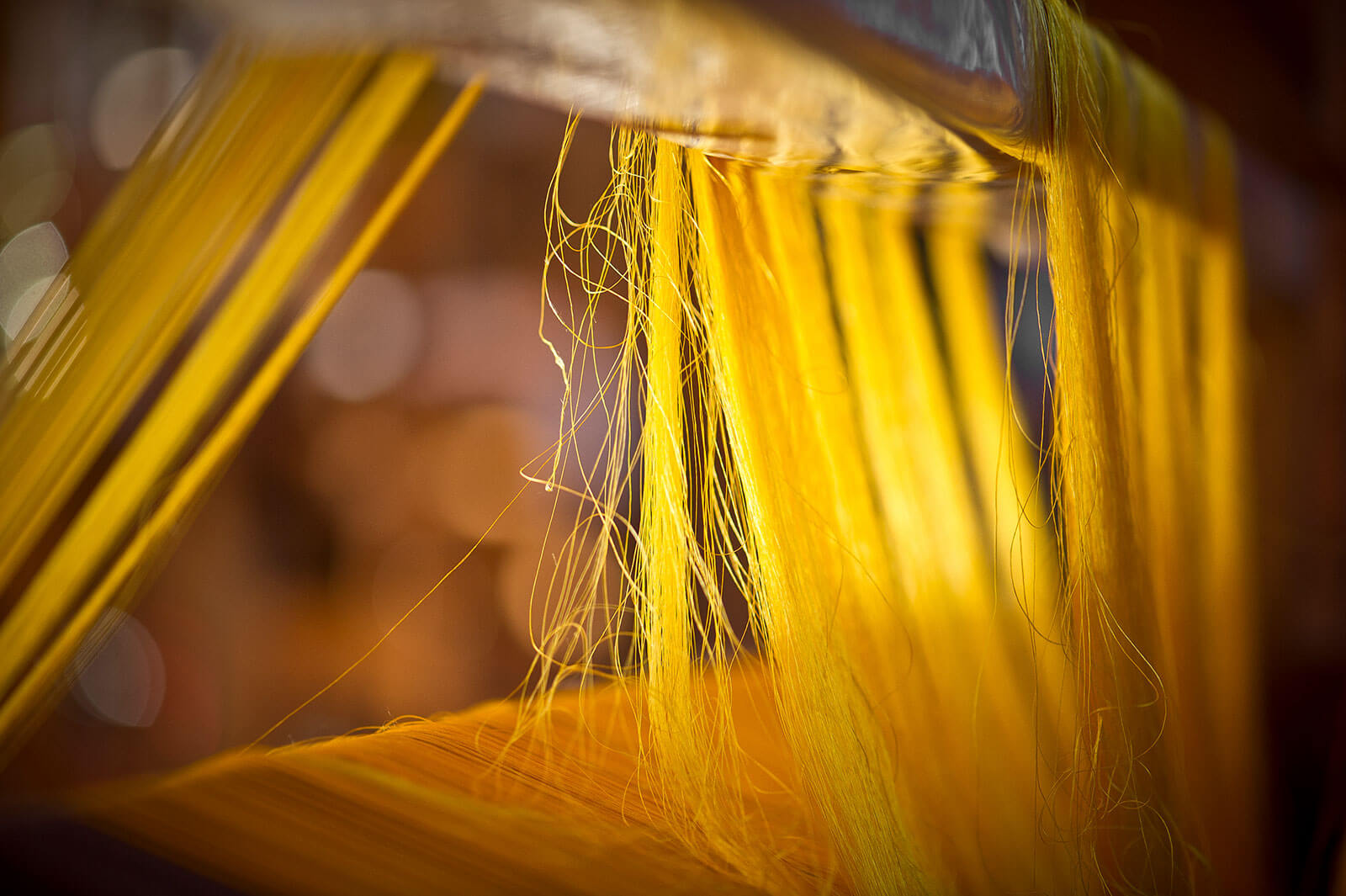 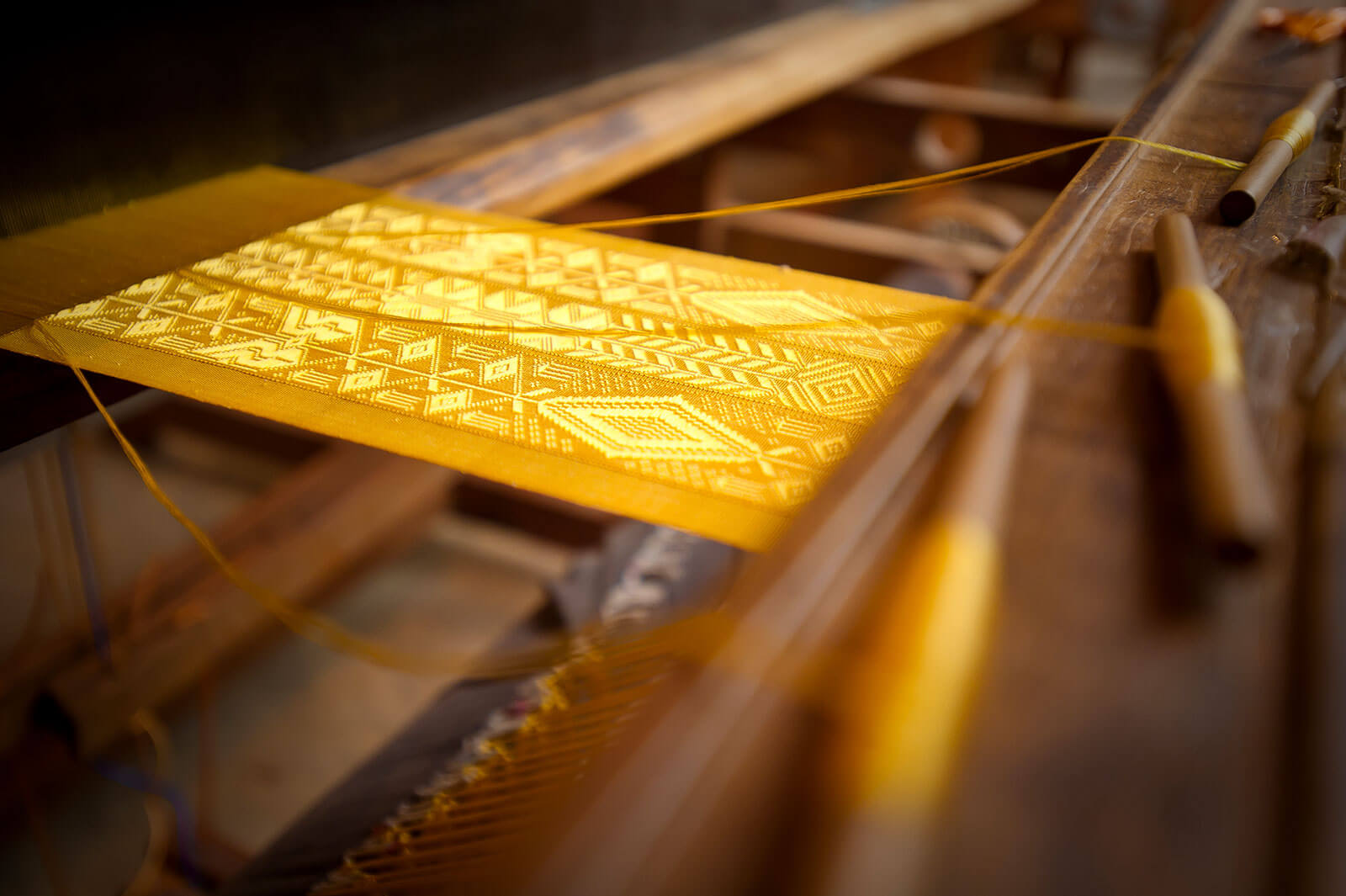 A panel of the brocaded weave lamba on the loom, 2008
COURTESY: Simon Peers, Nicholas Godley and Oliver Hoare Ltd. 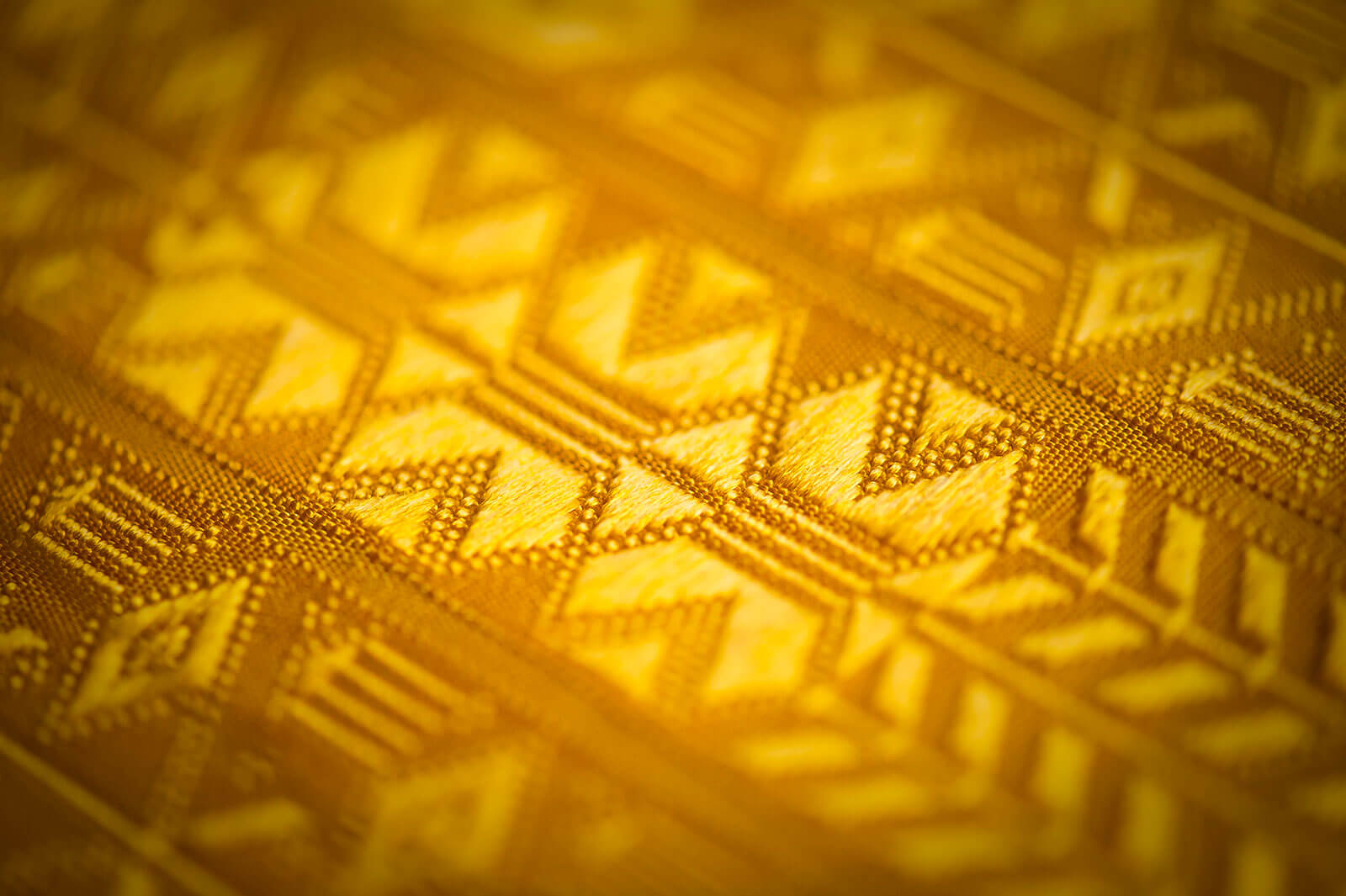 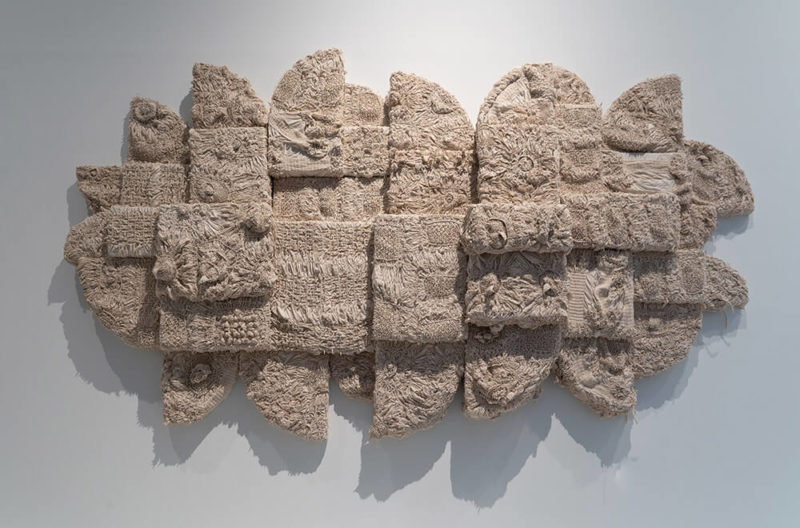 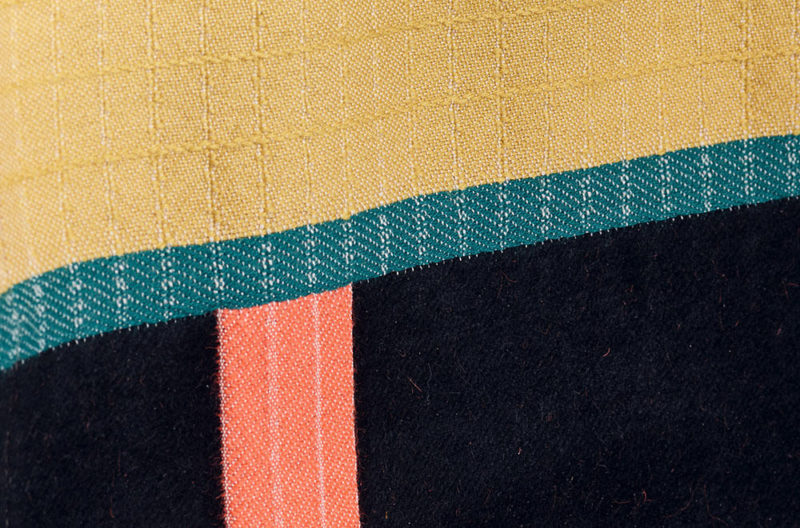