INGRID DONAT IS what you might call a ‘below-the-radar designer’. For somebody whose work is so original and distinctive, it is extraordinary how little known she is outside the rarefied world of the design cognoscenti. Unlike the more flamboyant rock-star names in the design world, Ingrid Donat’s pieces are not widely photographed – they are only to be seen in the homes of the collectors for whom she makes them, or in a specialist gallery such as Carpenters Workshop Gallery (co-owned by her son Julien Lombrail). Many of her pieces are one-offs, others come in strictly limited editions of eight. Her finely detailed interior design work, which involves her meticulously overseeing every aspect of the project (and which often encompasses everything from making the panels on the walls and the ceilings, to creating individual pieces of furniture), is only done for a small circle of art and design collectors. “Serious collectors,” she says, “need a special setting for their pieces – a total look if you like – and that inspires me to work in the same highly detailed way that Armand Albert Rateau, for instance, worked when he designed the entire contents of Jeanne Lanvin’s apartment in the rue Barbet de Jouy. When I saw that apartment [it is now in the Musée des Arts Décoratifs, donated by Lanvin’s son-in-law, Prince Louis de Polignac], I realised that art didn’t just mean hanging pictures on walls – you could have art everywhere … on the floor, in the bathroom, in the door handles. Everything he made for Jeanne Lanvin was a one-off, designed specifically for that space.”

Ingrid Donat is herself a one-off. Her beautiful apartment in Paris in the Marais is a clear testament to her idiosyncratic style: every wall has been covered in pale wooden sculpted tiles she has personally designed and overseen. She has designed some of the furniture herself, such as the dining table, which is made of walnut wood embellished with panels of her signature bronze engravings – the patterns echoing the African motifs she is inspired by. In fact she is surrounded by furniture she has either designed herself, or has bought from artists she hugely admires – such as Andre Arbus’s wonderful bronze-framed chair. DONAT HAD NO formal training at all, though art, she says, is in her DNA, “My grandfather was an architect and my father was a painter.” She did a year at the Beaux-Arts in Paris before marrying very young. Her husband was an auctioneer who loved art and collecting, so they moved in artistic circles. It wasn’t long before she met artists such as César and Giacometti and soon she was sculpting. She points to one of her very early works, an elegant figure of a pregnant woman. “I was pregnant myself at the time,” she tells me, “so that was my inspiration and very often in my work today you will find a curve.” 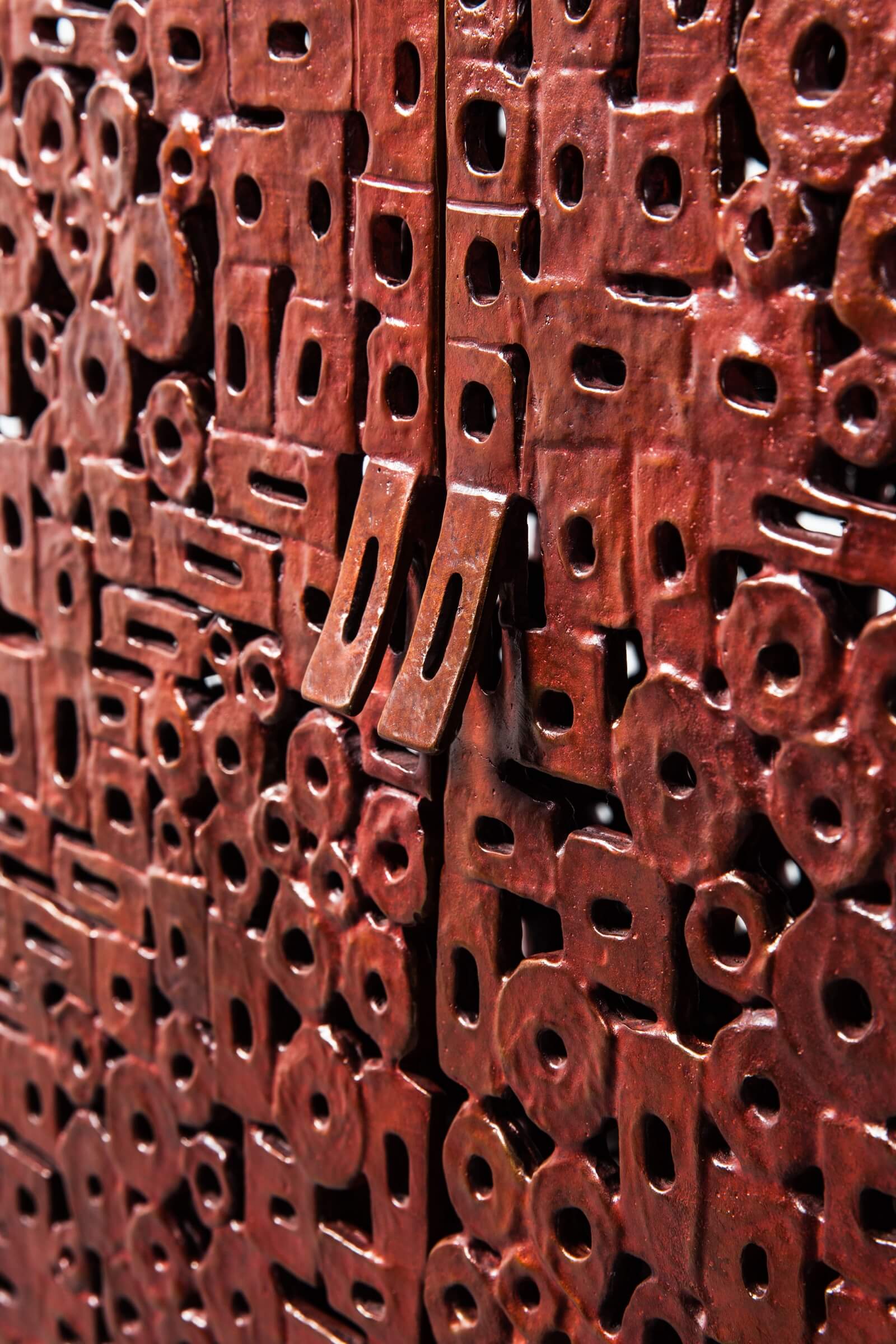 “I realised that art didn’t just mean hanging pictures on walls – you could have art everywhere … on the floor, in the bathroom, in the door handles” 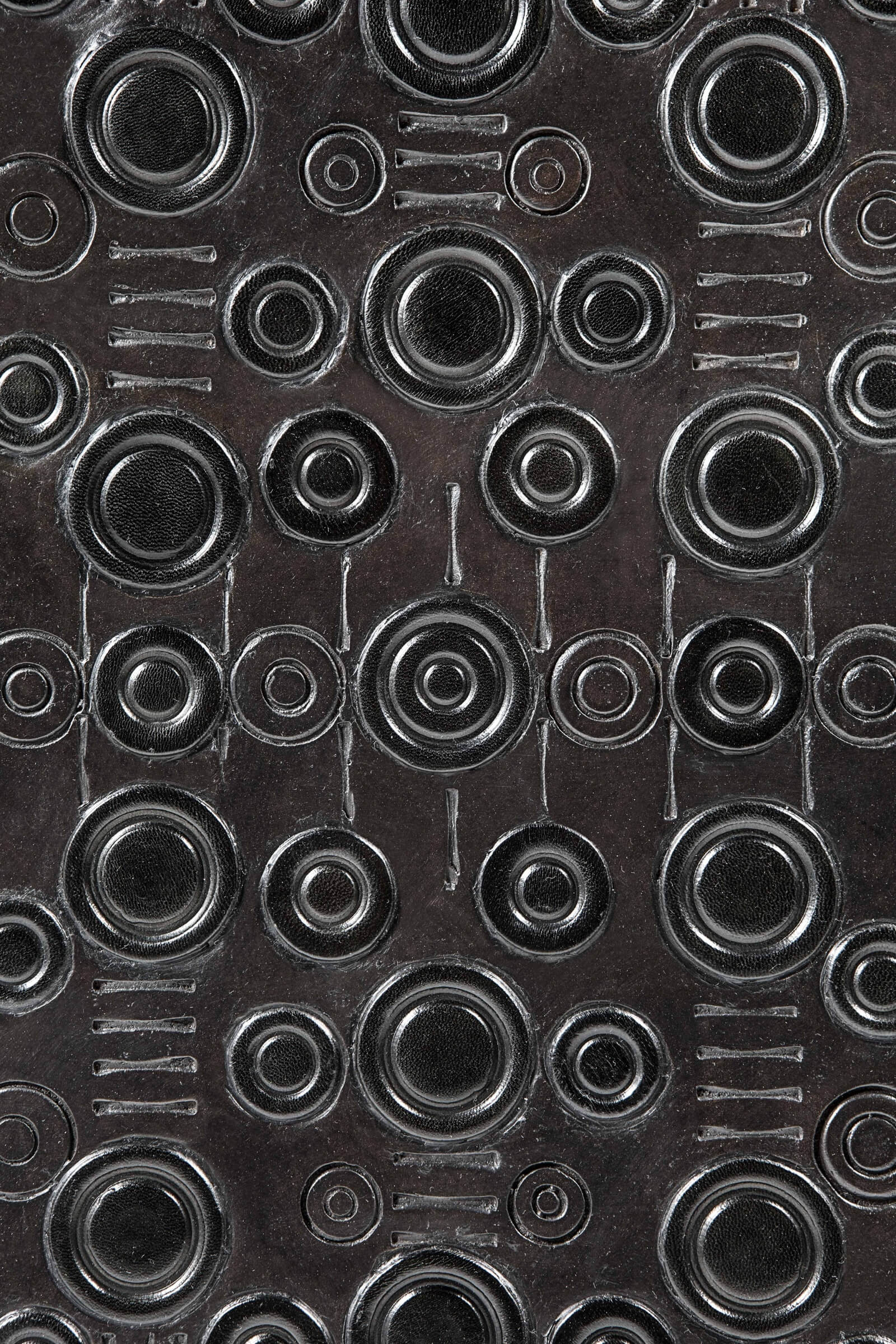 “One’s surroundings matter very much, they should give one a sense of being welcomed and safe. You should feel good energy”

She found herself wanting special pieces for her own house, such as a dining table large enough to hold big family parties, but she often couldn’t find anything that pleased her. It was Diego Giacometti who encouraged her to design something herself. “I sculpted a table in paper and plaster, made a mould and then had it cast in bronze. From there I decided to make something for my husband’s birthday – I had no money of my own and didn’t want to ask him for money to buy him a present – so I made him a lampstand. One day a very famous person saw it and liked it so much that he asked me to make four lampshades for his house in Marrakech.”

And so she began to learn how to make things, how to make moulds and get them cast, and how to engrave. She went on to make more tables of every kind and she started painting fabrics and stitching cushions. “I always felt that one’s surroundings matter very much, that they should give one a sense of being welcomed and safe. You should feel good energy. I would always rather buy something for the house than a pair of boots or a piece of jewellery. I don’t like decoration but I was always looking for things that seemed natural and timeless.” 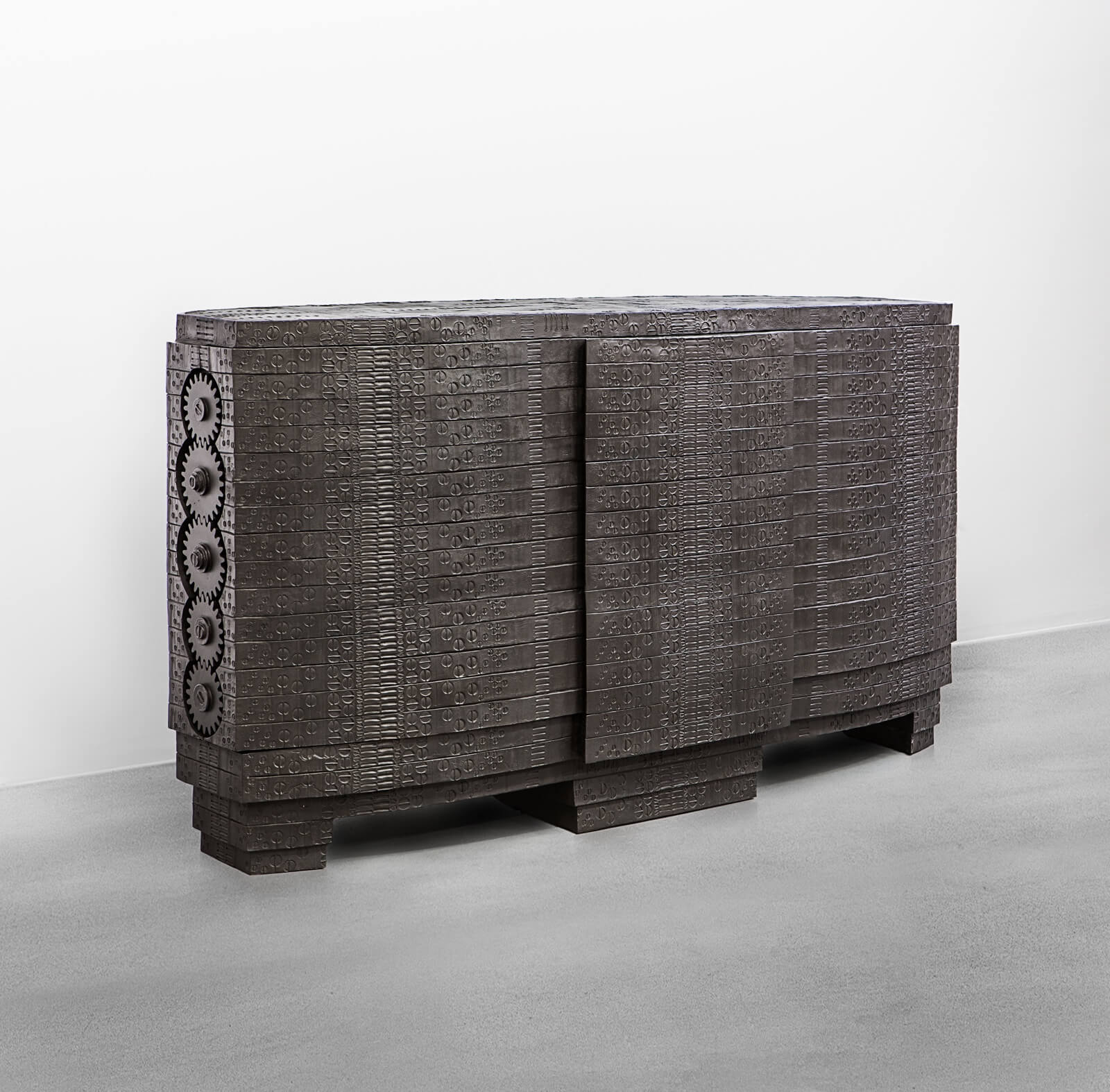 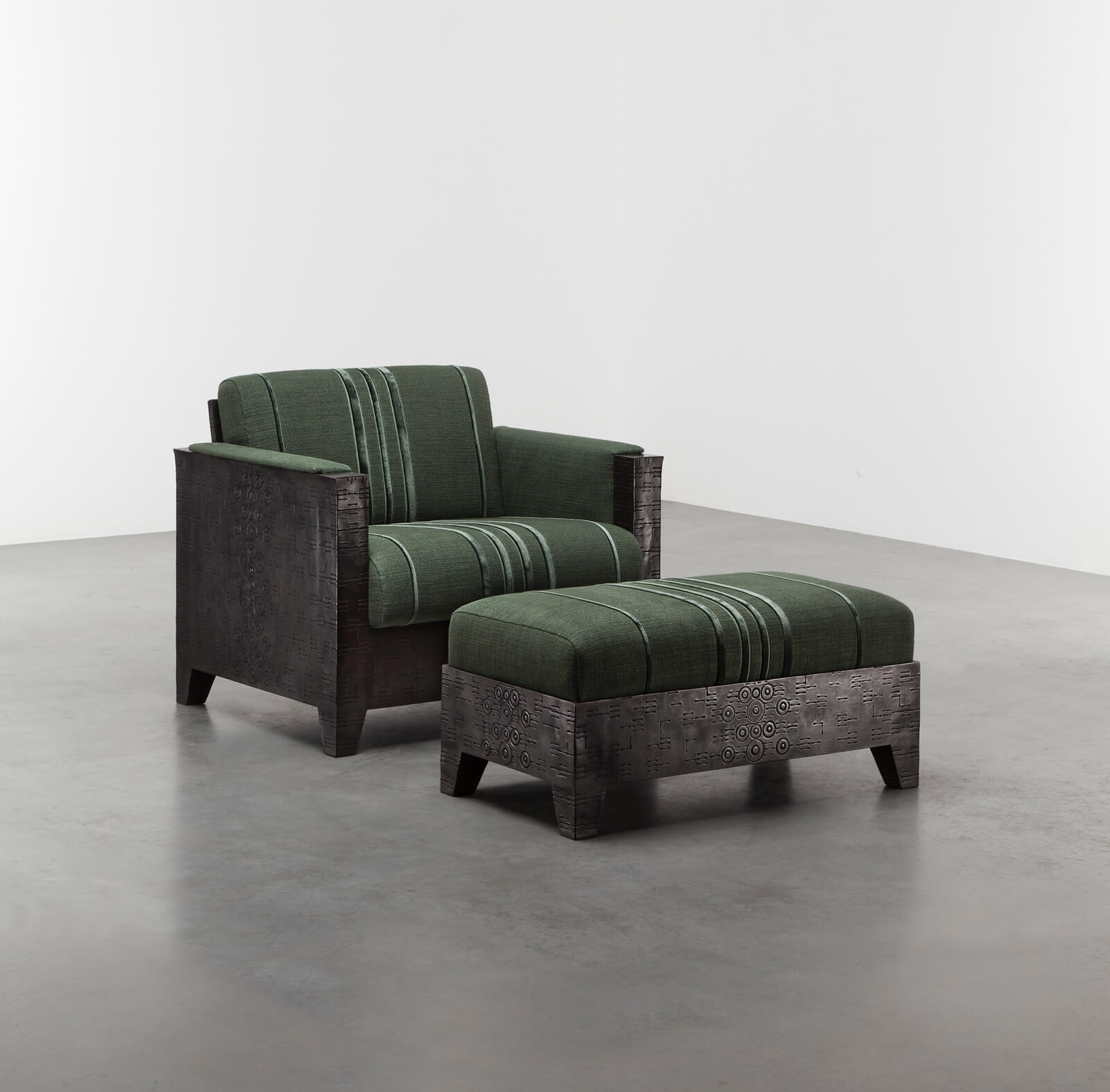 It wasn’t, however, until after she and her husband separated that she began to take her designing career more seriously. “I thought, what do I do now? I knew I wanted to work but it wasn’t easy.” Fortunately it just about then that Bernard Dulon, a well-known Paris gallerist who specialised in African art, asked her to put her sculptures and furniture into an exhibition. “I was nervous that nobody would come,” remembers Donat, “but in fact there were so many people that the road was blocked – and every single piece sold! A famous gallerist bought many pieces for his house in Ibiza, and whilst they were still on show a well-known writer also saw them and wanted them too. As the orders began to come in I realised that I could make a career of it. But I’d sold all the pieces I’d made for our home so I was left with no husband, no lamps and no furniture!”

So Donat started from scratch. She began to create sculptures and pieces of furniture which she sold through a few specialist galleries. Then Barry Friedman, a renowned New York gallerist specialising in design, asked her to make some pieces for him. At that time many pieces by famous designers were utterly beyond the means of most people, whereas Donat’s work was much more reasonably priced. “The wonderful thing about Barry Friedman was that he gave me carte blanche to do what I wanted,” Donat says, “And that is how I discovered how to make things. I made, for instance, some burned wood panels, which I later used for my own house and I often include them in the interiors I create for other people.” THOUGH SHE WAS developing her own distinct design language and making something of a name for herself, Donat wasn’t making much of a living. It was then, about twenty years ago, that her son Julien Lombrail decided to take her in hand. They had a light bulb moment when they saw two of her pieces that Barry Friedman had sold, selling for sky high prices in a Paris Gallery. They had also noticed how prices for special pieces such as Ron Arad chairs were many times higher than anything she had been charging. Lombrail developed a more appropriate pricing structure for her work and Donat began to prosper.

As her work became better known, Donat began exploring more innovative techniques and materials. She now has the resources of the Carpenters Workshop Gallery’s atelier at Roissy outside Paris, where artisans can bring her designs to life. Donat initially starts with a sheet of wax which she engraves, carves and shapes to form the ‘skin’ of her work; this structure is then applied to a wide variety of materials such as bronze and leather, wood and parchment. She does the engraving herself, as well as the painting on upholstery and the treating of the wood. In order to get the exact effects she is after, she has designed tools that give her the precision she needs. Her work has great strength and simplicity. She is deeply moved by Africa and its influence can be seen everywhere in her work. Her work has combined the the sophistication of Art Deco with the strength and brutality of African motifs, to create something timeless and distinctive. Much of her work has echoes of the scarification and body decoration of some of Africa’s most distinctive tribes. You see it in the patination on the bronze light fitting ‘Applique Reema’ which she did in 2013, in the comforting shape of the ‘Fauteuil Ohio’ inspired by the ceremonial chairs found in Africa and in the scarification markings on the aluminium frame. In her own home her immense dining-table has scarification markings on the under surface of the frame. Her bronze ‘Banc Tribal’ stool echoes the shapes of traditional African tribal stools and headrests, but it also features inlaid leather disks carved into the piece with decorative relief patterns. Repetitive circular discs as a decorative motif on her designs have become one of the signature marks of her style, most strikingly found on some of her bronze cabinets. But besides African tribal art she is also inspired by the paintings of Gustav Klimt, using his intricate detailed patterning as a starting point. DONAT MAY BE under the radar but word is beginning to spread beyond the circles of a few private collectors. The stand she created for Carpenters Workshop Gallery at PAD art and design fair in October 2018 created a sensation and won the prize for best stand. It managed to be both simple, yet immensely striking. She had envisioned the space as the home of a tribal art collector, with a strong blood red facing wall and a deep red sofa (reminiscent, it seems of her grandfather’s sofa). Interspersed carefully through the space were pieces of genuine tribal art and sculptural works by other artists in the Carpenters’ Gallery stable. Donat has also produced work for sought-after interior architects such as Peter Marino, as well as coming up with special pieces for Chanel and Yves Saint Laurent. Amongst the collectors of her work are well-known names such as Brad Pitt and Tom Ford. Some idea of the esteem in which her work is held by collectors can be gleaned from the fact that when pieces come up for resale at auction, they go for astronomical prices. At the most recent Design Day Sale at Phillips New York, for instance, a bronze table, dating from 2006, sold for $106,250 on an estimate of $45,000 and $60,000. Most recently, Donat has conceived a house in Ohio for a well-known collector of Art Deco design. “I designed everything – the carpets, the walls, the chandeliers, the ceiling, the tables, the chairs,” she said. It is in this realm, after all, that she is happiest of all – creating an entire environment that is all of a piece.