Designers showed their flair for upcycling and innovation, visitor attendance was up, and the organisers held their nerve under the cloud of coronavirus. 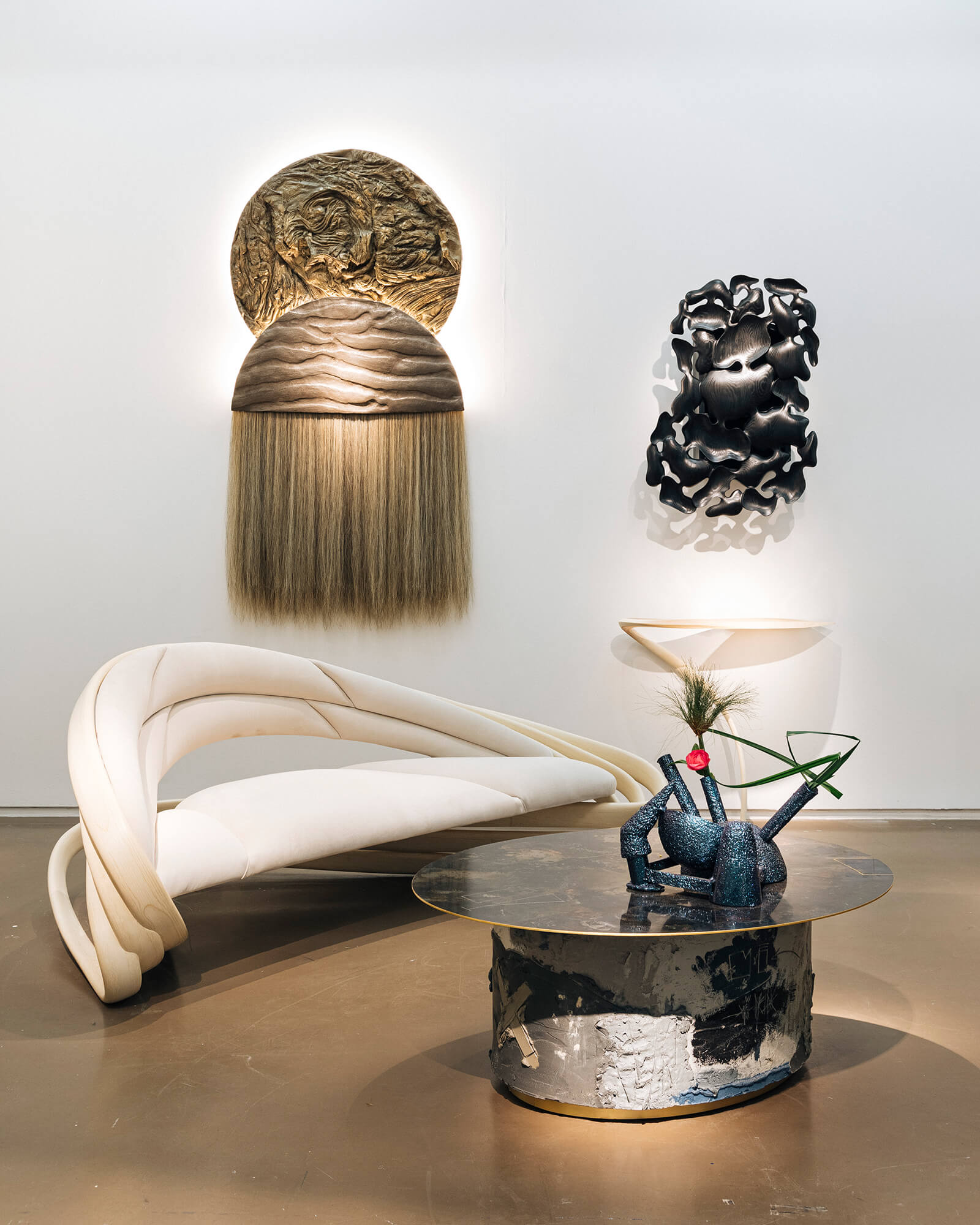 AT THE THIRD edition of Collectible, the contemporary design fair held in the 1930s Vanderborght Building in central Brussels, hand sanitisers greeted visitors at the VIP desk. Yet the organisers put on a brave face despite the spread of Covid-19 in Europe. “We followed each and every official guidance and recommendation from the federal public service for public health with regards to the coronavirus to ensure the safety of both our exhibitors and visitors,” the fair’s cofounders Liv Vaisberg and Clélie Debehault say. “We only had one cancellation on the exhibitors’ side and the fair attracted just over 18,000 visitors, compared to just under 15,000 last year.”

As well as Blue Mountain School from London’s East End dropping out, Sumer Singh and Karen Mercedes from Canadian brand Mtharu cancelled their trip due to Covid-19, leaving a Belgian representative in charge. Among Mtharu’s pieces on display was the ‘New Primitives Lamp’ (2020), priced at €14,350. Comprising bulbous, LED-lit shapes on tall, curvy legs, the Surrealism-inspired lamp was made by applying reclaimed aluminium shavings from CNC milling onto the steel substructure. 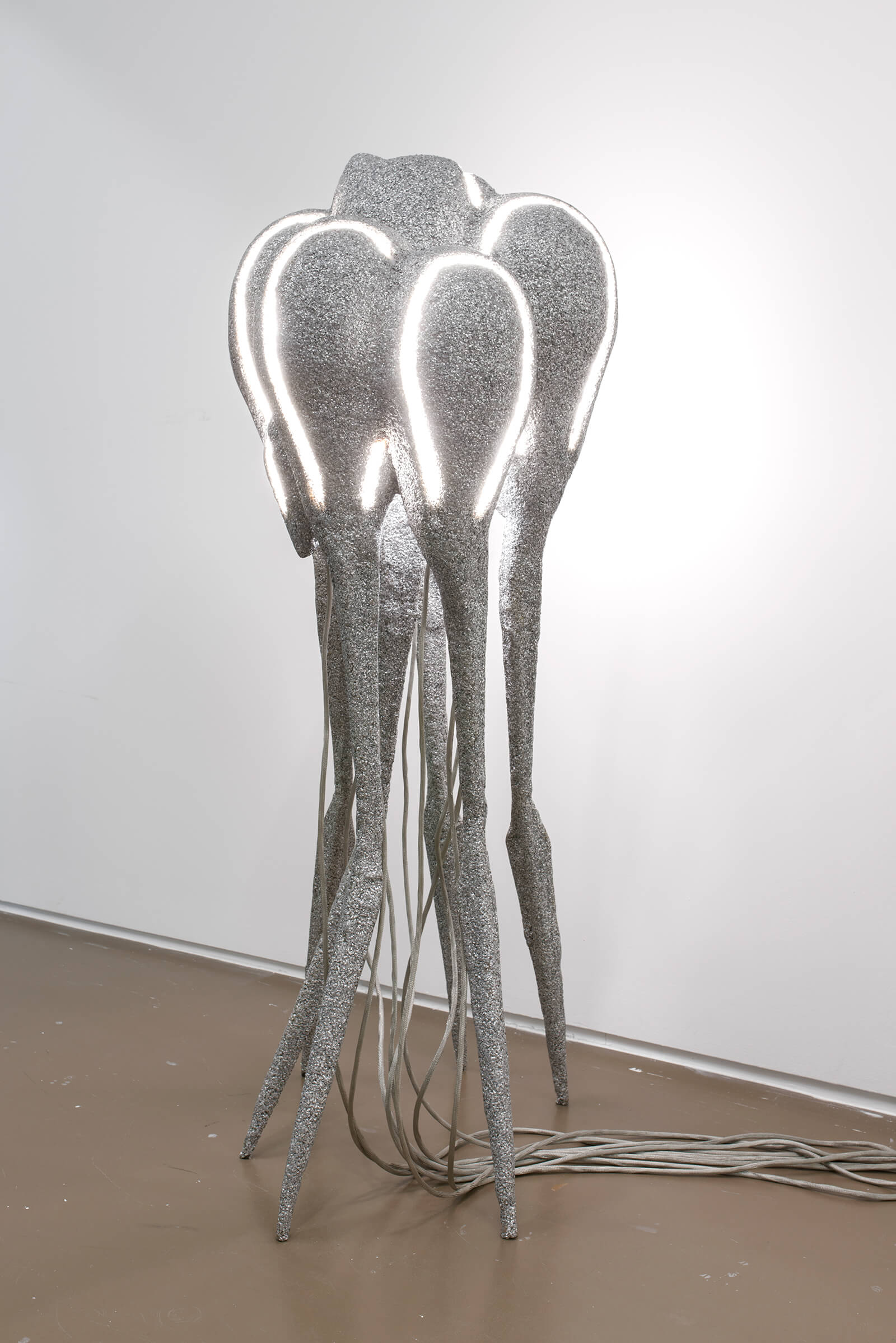 The evolving design trend of recycling left-over materials into new works was observed across Collectible. Plasticiet, the Rotterdam-based studio founded by Marten van Middelkoop and Joost Dingemans, unveiled gleaming, silvery furniture made from recycled plastic. With their swirling patterns, the cabinet, stool and chair (priced at €5,000) in the ‘Mother of Pearl’ collection (2020) bear an uncanny resemblance to natural stone. They are intended to demonstrate that plastic waste, as a raw material, can rival high-end materials. The idea originated from a field trip to India and seeing craftsmen making products from recycled plastic bottles, cotton clothes and metal parts. 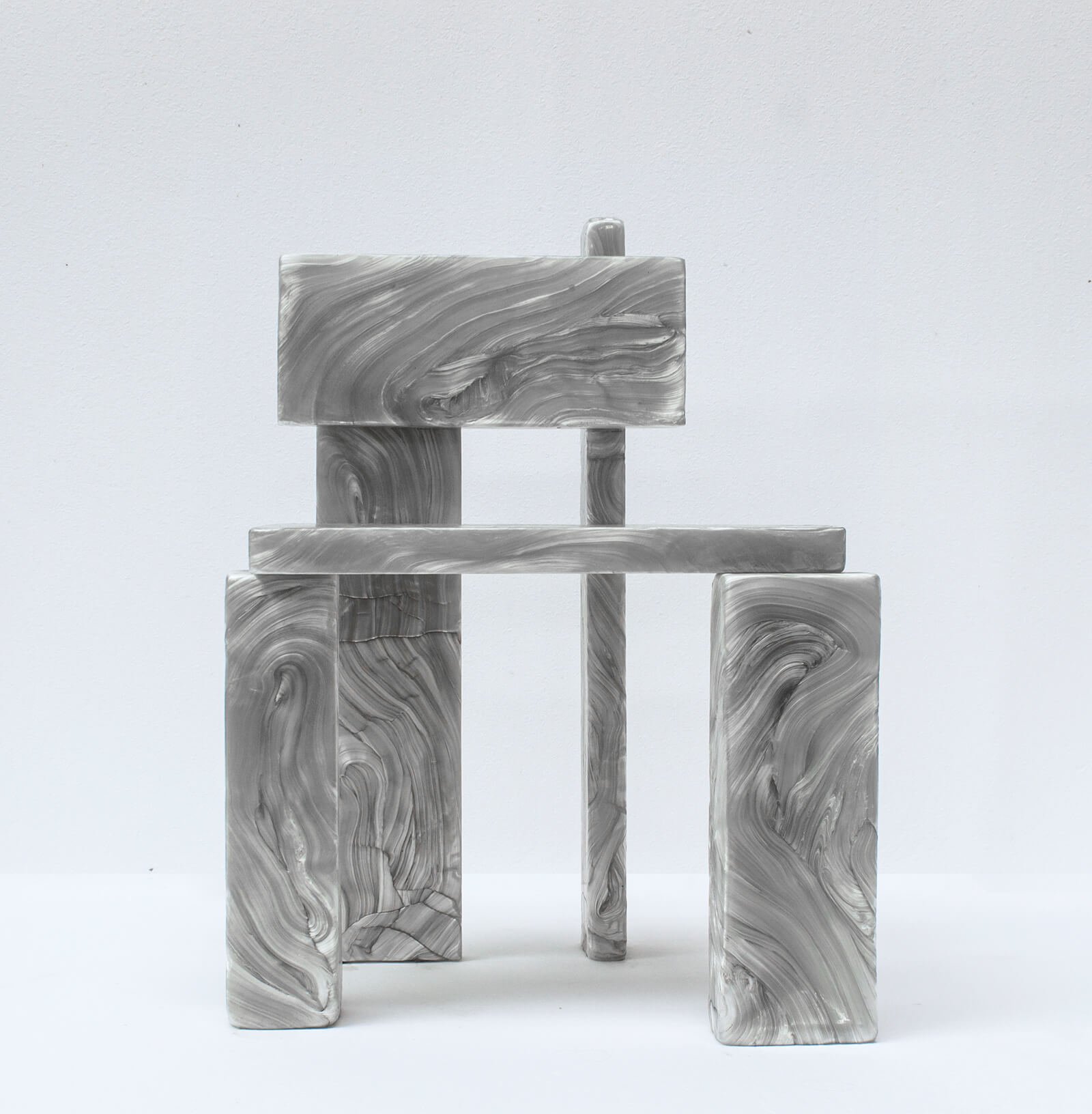 Several works by other designers on show across the 115 exhibitors, spread over the building’s five floors, also featured  upcycling. Jousse Entreprise from Paris presented Florence Doléac and the Maximum collective’s collaborative piece ‘Maxidodo’ (2019), a red-and-green bed sculpture priced at €18,000, made by upcycling the Vauban security barriers used to control crowds during French protests.

Then on Rademakers Gallery from Amsterdam was Diederik Schneemann’s incredible ‘Matchbox King Clock’ (2020), priced at €28,500, made from thousands of boxes of matches meticulously arranged to evoke a grandfather’s clock. “He collects old things like matches, postcards and smurfs and brings them together to make new things,” gallery director Pien Rademakers says. 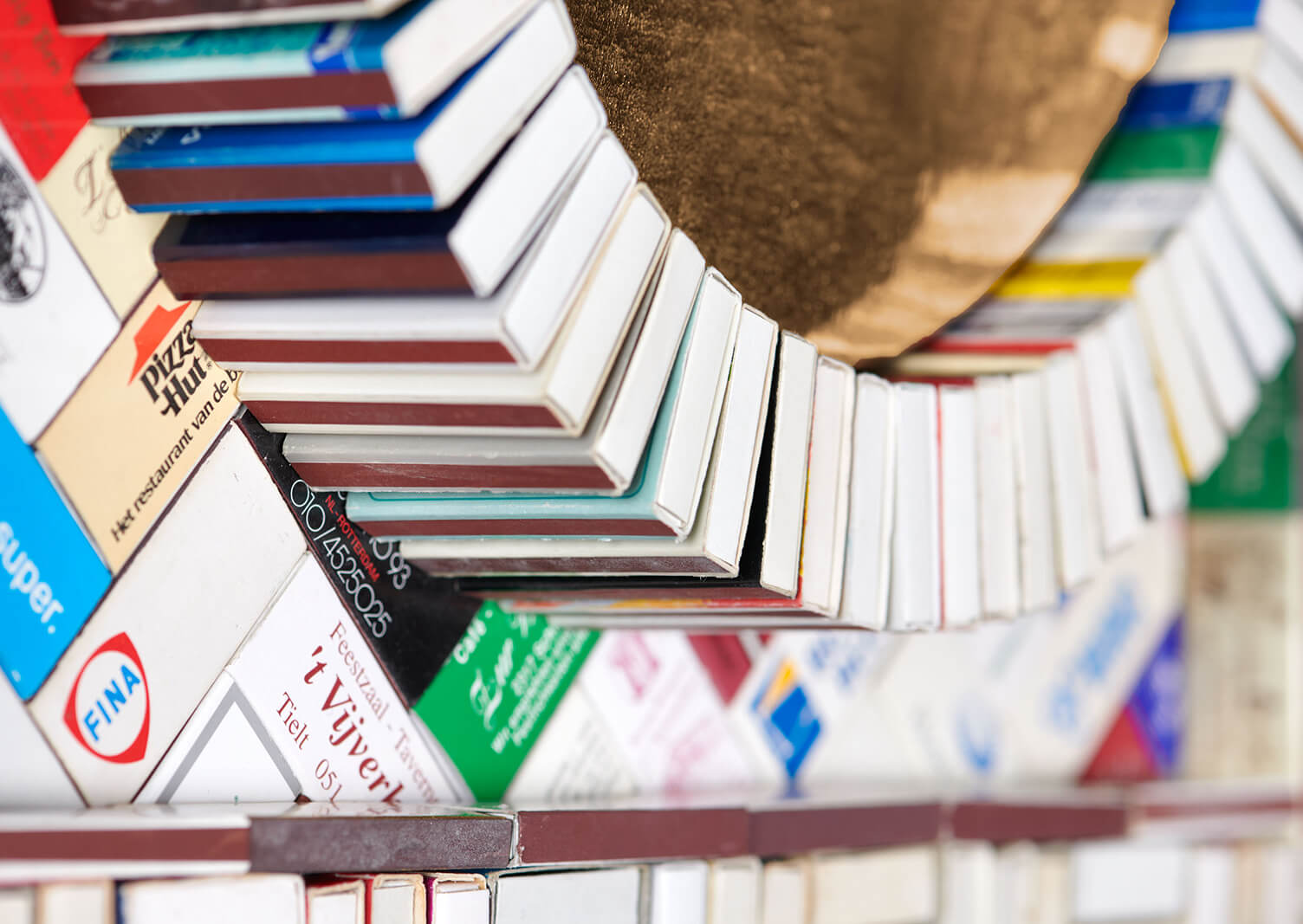 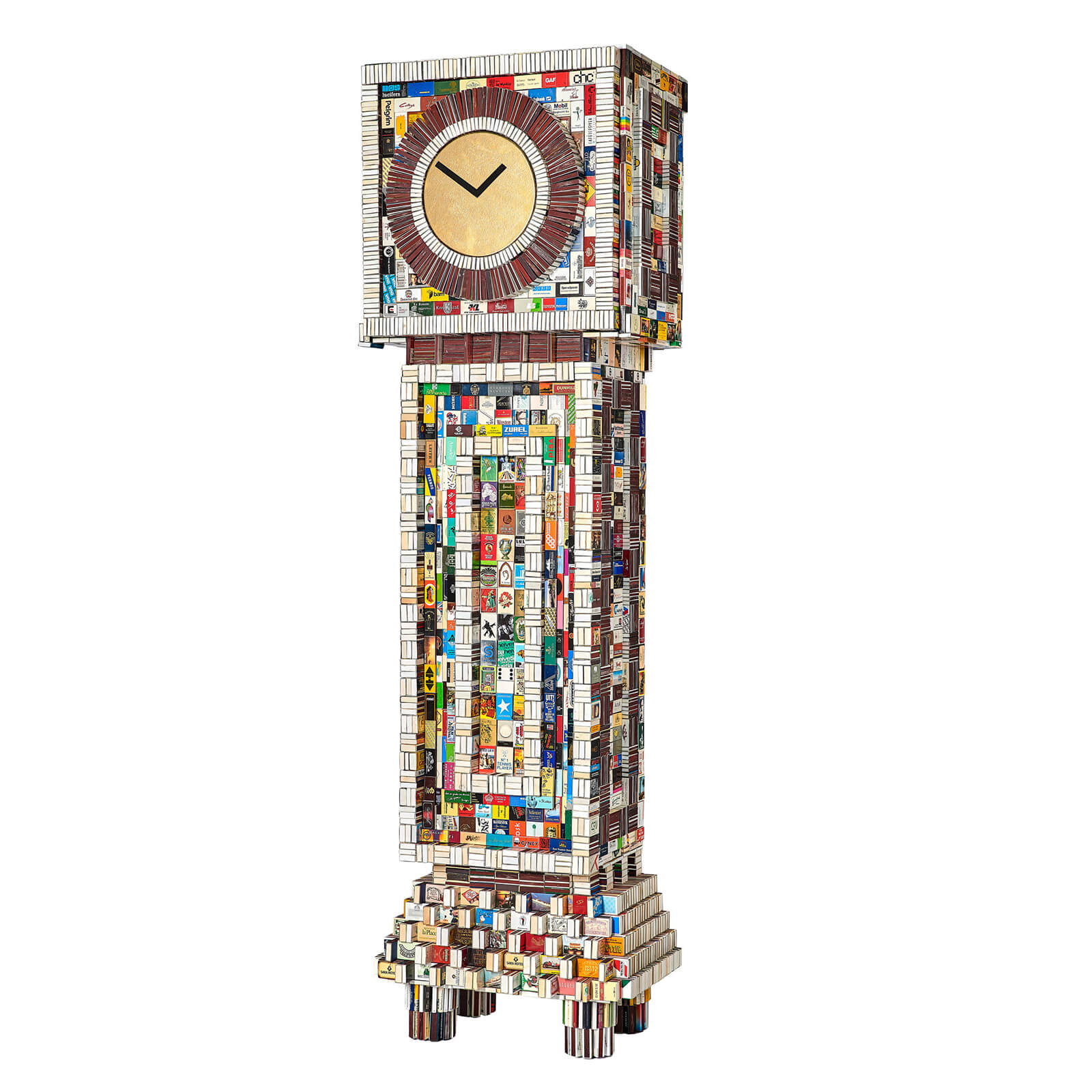 Elsewhere, innovative ways of working with technologies and materials abounded. Todd Merrill from New York showed Marc Fish’s  ‘Ethereal Series Lounge Chair, UK’ (2019), priced at $27,000, made from pouring a few millimetres of resin in between wavy, thin veneers of sycamore wood every day over a two-month-long period. The result is a feat of magical virtuosity. “Marc Fish is the only person to develop this painstakingly slow technique; it seems impossible to the eye that this could be achieved with wood,” Merrill says. 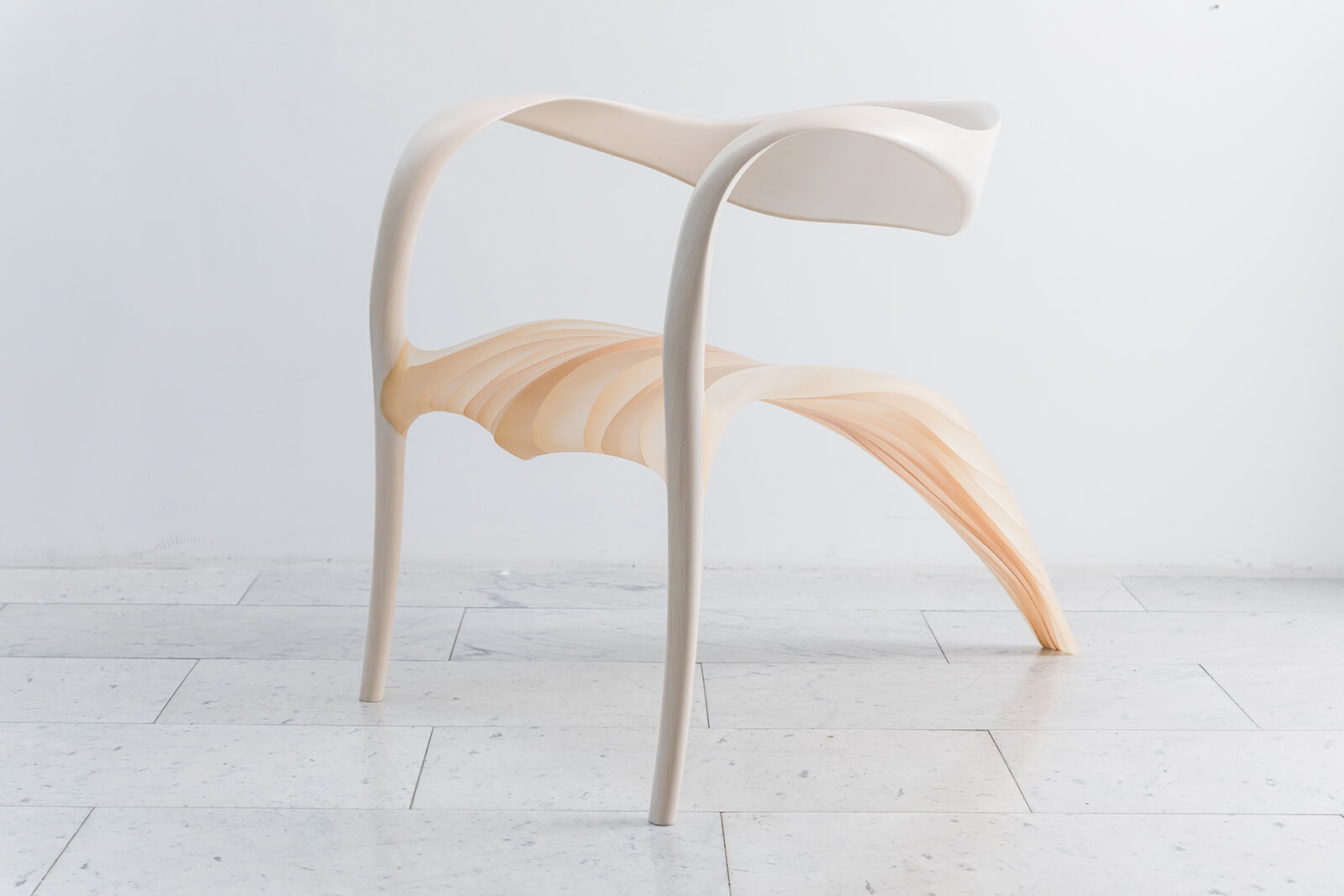 Equally intriguing on Merrill’s stand was fellow British artist Sophie Coryndon’s ‘Dossel Diptych No. 2’ (2018), $40,000, composed of two panels of cast Jesmonite honeycomb that have been gilded with 23.5 carat gold leaf. The casting of honeycombs and gilding of each hexagonal cell is a reflection on global warming. “It’s almost like a tapestry and has a textile quality,” Merrill says. 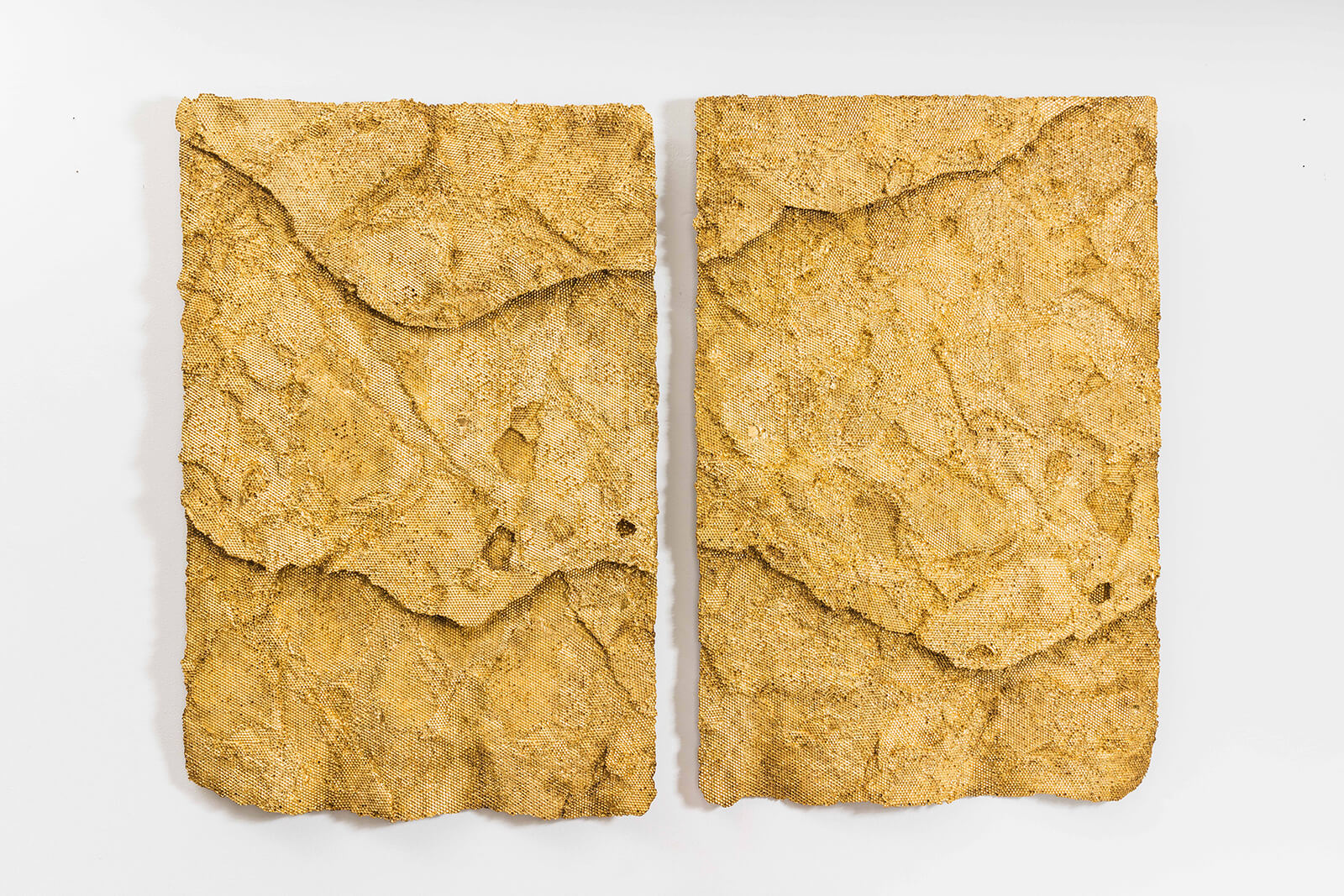 At DiSé from Sicily was a presentation of new works by eight designers, all produced in DiSé’s atelier, that was curated around the theme ‘Domestic Monuments’. Among them was ‘Groom’ (2019), €25,000, by OSΔOOS, the Eindhoven-based design duo Oskar Peet and Sophie Mensen. A gold, five panelled rectangular sculpture opens, thanks to manually rotating individual louvers, to reveal a concealed vanity cabinet. “You can use the shelves for objects like fragrance bottles and can close the piece so it becomes a sculpture,” Giampiero Corallo, director of DiSé, says. 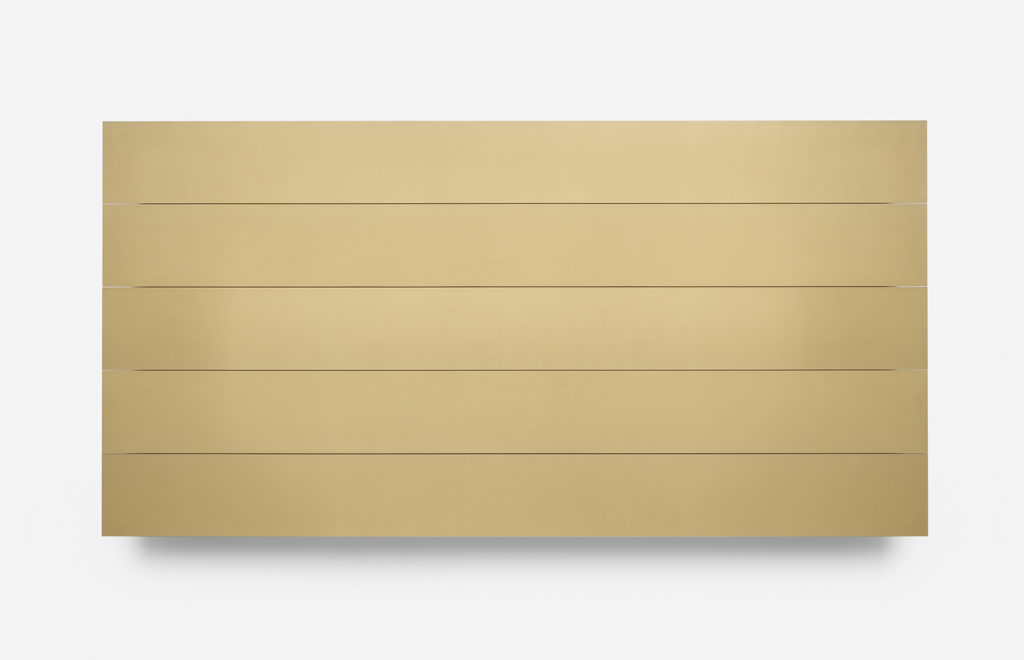 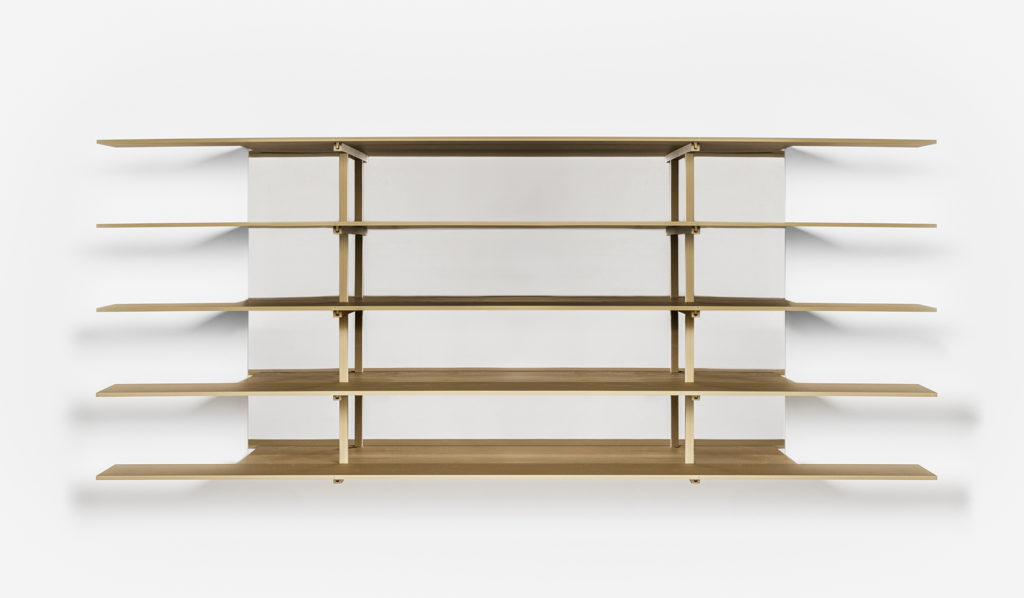 Also eye-catching at DiSé was Michael Schoner’s ‘Numen’ (2019), €33,000, a purplish, circular seating arrangement with a table and bench undulating over pale pink legs. The German architect/designer developed it after contemplating roundtable discussions. 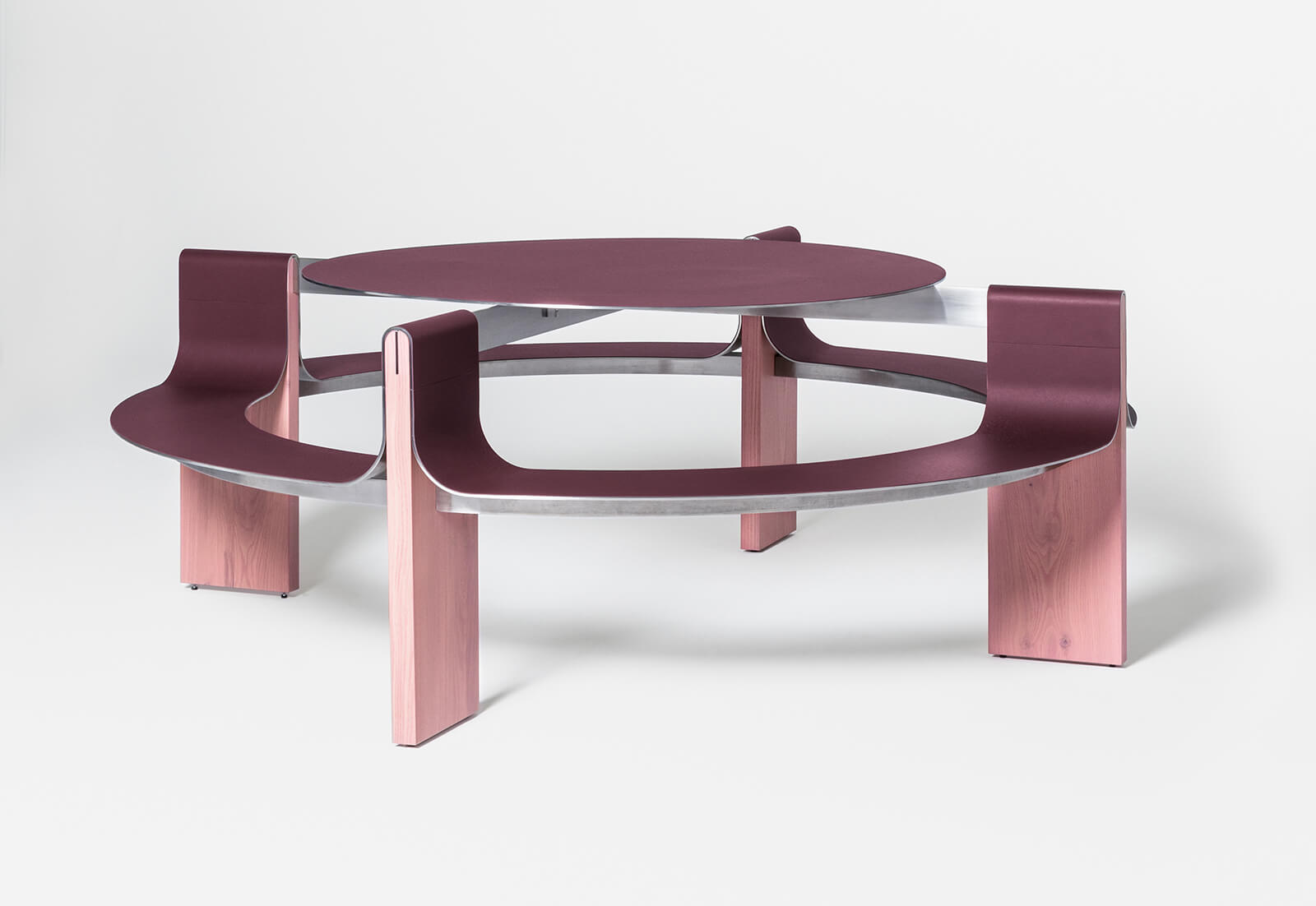 Another highlight was Muller Van Severen’s ‘Alltubes’ (2020) collection at Valerie Traan Gallery from Antwerp. On show were the Belgian duo Fien Muller and Hannes Van Severen’s cabinets, a bench and a chair all made from the repetitive use of round aluminium tubes. The conceptual collection is an exercise in how to stretch the potential of a mundane, stark material to rippling effect. 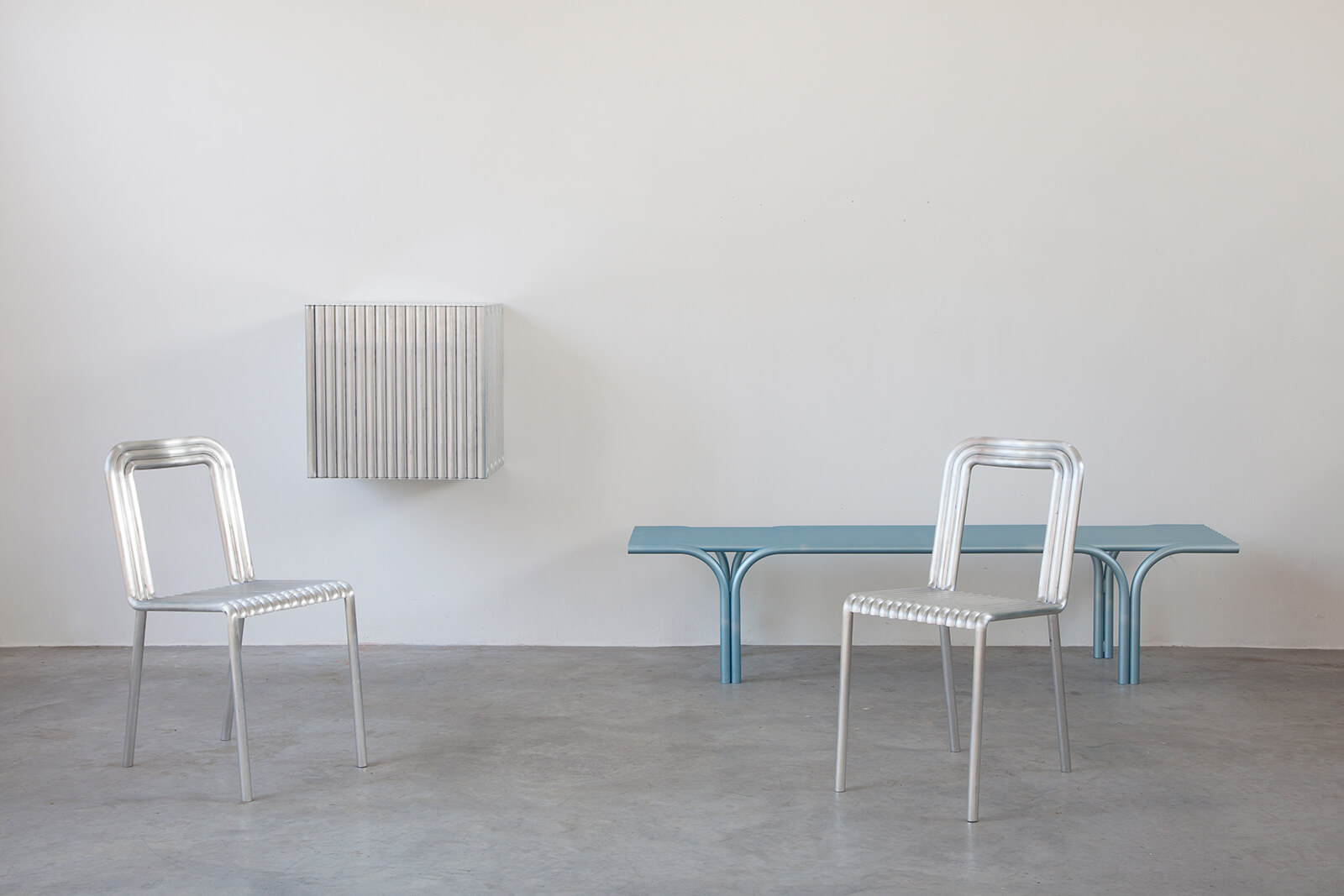 A defining particularity of Collectible is the wide range of works by emerging designers, pointing to its reputation as a discovery fair for experimental design.  Notable was the space dedicated to the many tenants of Zaventem Ateliers and, next door, the BRUT Collective, which included a staggered concrete structure by Bram Vanderbeke.  Spazio Nobile from Brussels showed stools from Pao Hui Kao’s ‘Paper Pleats’ (2018-2019) collection. Kao is a young Taiwanese, Eindhoven-based designer who has created poetic pieces of furniture by combining countless sheets of tracing paper with glue; although they look as light as a feather, they are surprisingly sturdy. 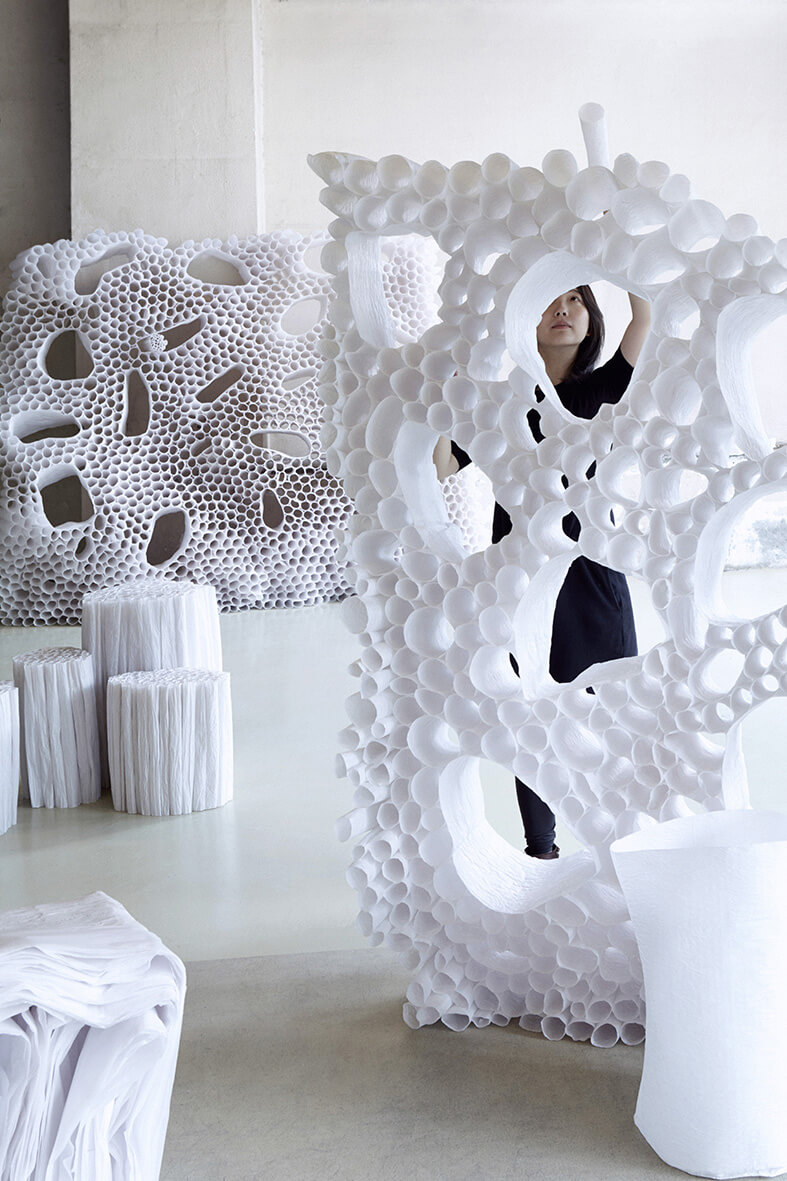 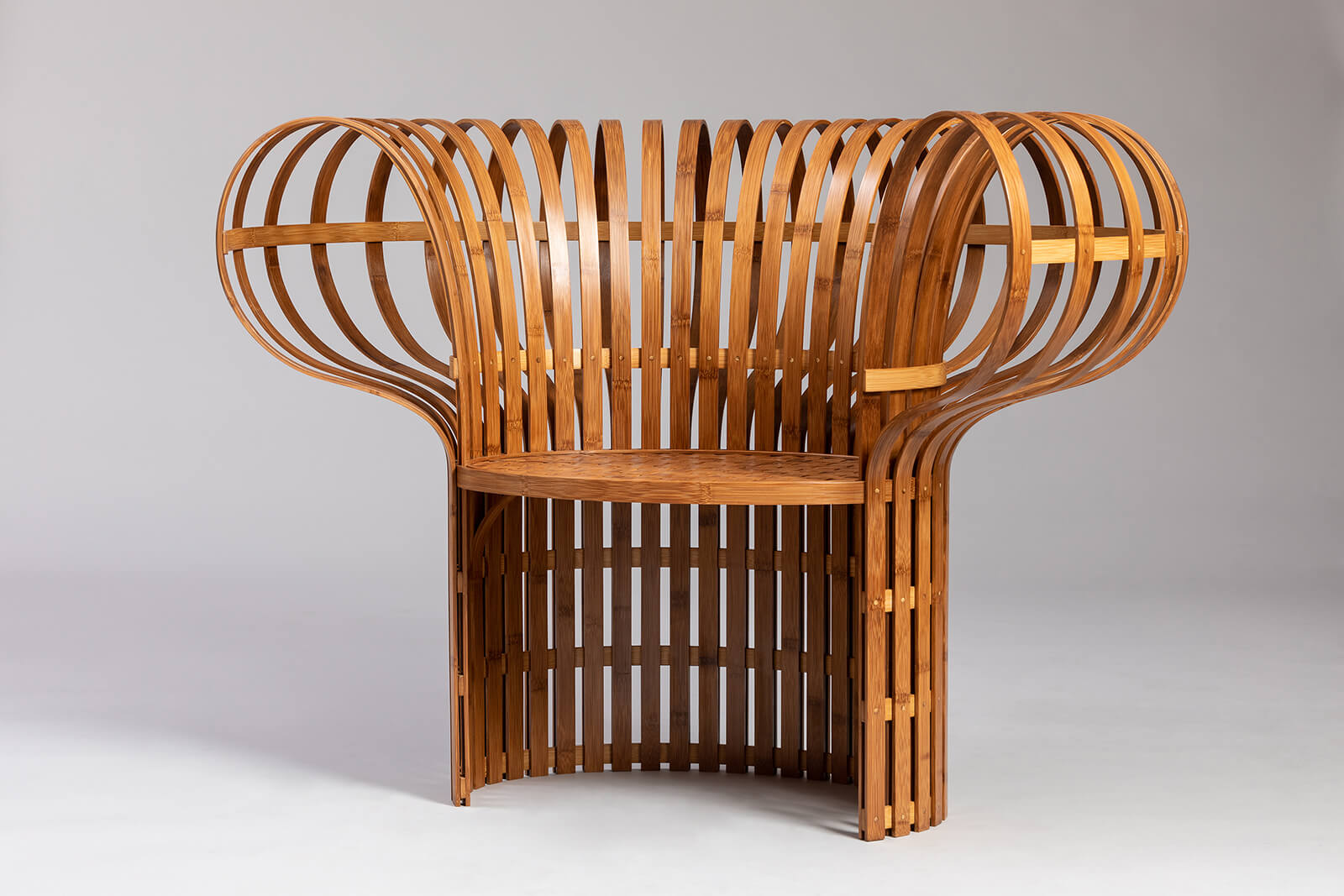 It was the traditional western art of marquetry that was updated in Laurids Gallée’s pinewood table, ‘Floral Inferno’ (2018), on display at Fracas from Brussels. The young Austrian, Eindhoven-educated designer laser-cut the floral motif and filled in the shapes with a blaze of yellow, red, blue and black pigments. “He uses a very liquid ink and viscosity in the pigments that is applied to each part and then adds an acrylic varnish,” Romain Silvy, director of Fracas, says.

Rene Siebum’s ‘Beam’ (2019) at Rauminhalt-Harald Bichler from Vienna also brought techniques of working with wood and craftsmanship into the 21st century. Over the course of many months, the Dutch designer sculpted the poplar ‘beam’, which becomes increasingly slender at its centre, so its form would resemble a dumbbell. Photo documentation on the wall records how the piece was sequentially created. 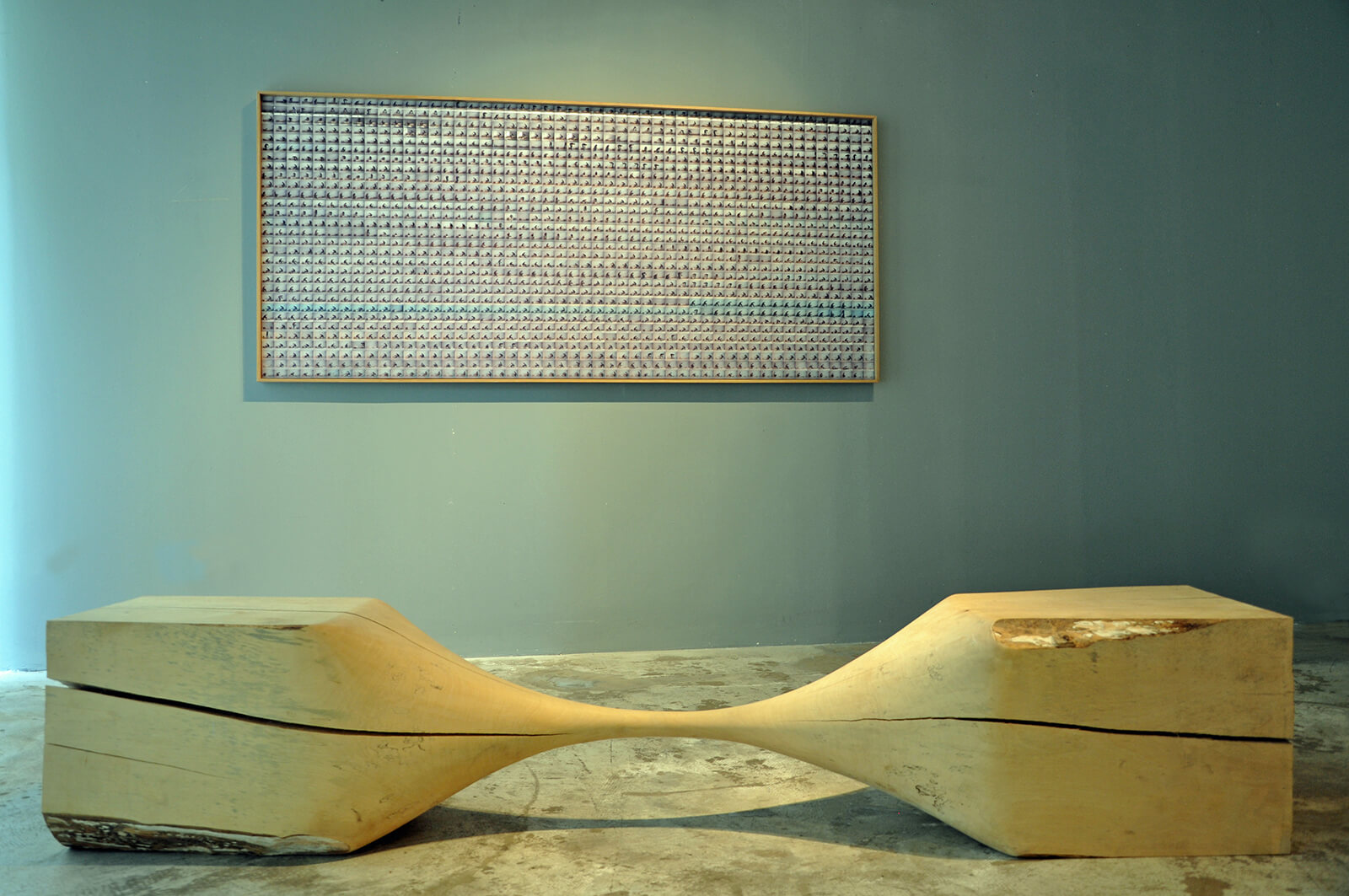 What were Bichler’s thoughts on Collectible’s third edition? “I missed there not being guided tours with curators, collectors and friends of art and design but the atmosphere was really great and the building was fantastic,” he replies.

An interview with Bram Vanderbeke, a member of BRUT collective, before Collectible 2020
COURTESY: TDE TV 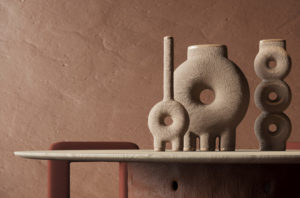 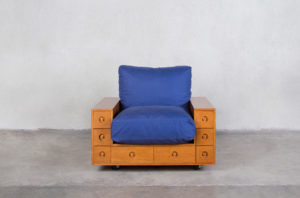 Market
TEFAF Maastricht
As the world's premier fine art and antiques fair opens, The Design Edit reports on some of the collectible design masterworks on offer.
By Anna Sansom 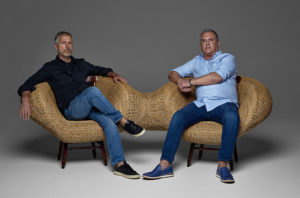 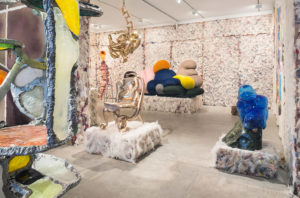 Exhibitions
Misha Kahn: Soft Bodies, Hard Spaces
A wild imagination, no boundaries and technical prowess produces an extraordinary show, from a rising US star of collectible design.
By Judith Gura
The Design Edit
For Collectors and Dreamers
Read
Connect
Legal
Join Our Bi-monthly Mailer
Follow and Share
© 2021 The Design Edit.
All Rights Reserverd