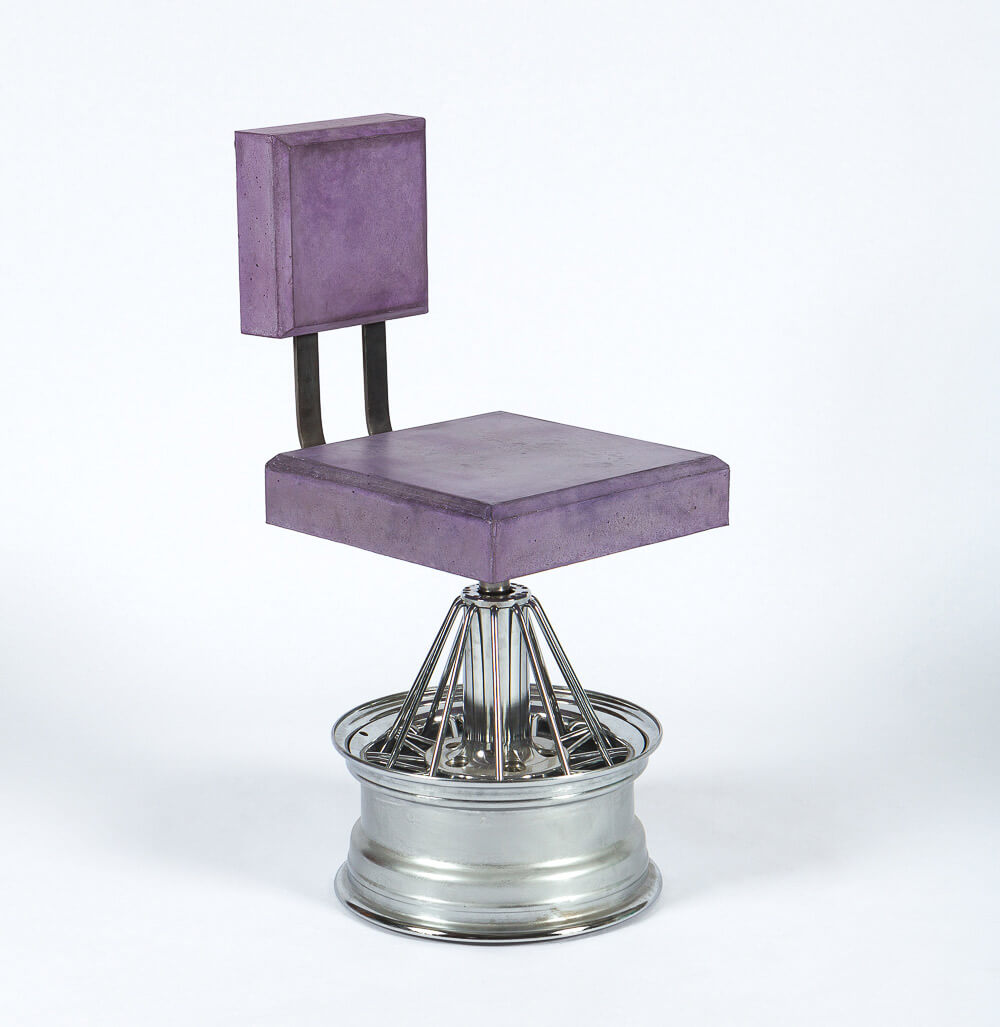 FEEL FREE TO admire Dozie Kanu’s work, but just don’t call him a furniture designer. The 26-year-old rising star insists “I don’t consider myself a designer. I’m an artist.” It’s not said with pretentiousness, but as an earnest effort to explain that behind every object he makes — and he makes each one entirely himself — is the generating idea, not the function. Although he acknowledges that his most attention-getting works have been in the form of seating, that was never his point. Indeed, even his sittable chair-sculptures are not particularly comfortable. “There are multiple points of entry for each piece,” he continues. ”It might be concept, or material, or domesticity … but it’s never function.”

It’s fitting, then, that Kanu’s first museum show, a one-man exhibition that opened on 15th November at the Studio Museum in Harlem, is challengingly entitled ‘Function’. Curator Legacy Russell and assistant Yelena Keller have placed five chair-sculptures and three wall-hung panels around a white-walled, concrete-floored room in the museum’s industrial-look temporary quarters (a new building will be completed later this year). The austere surroundings accentuate the almost accidental look of objects assembled from castoffs or detritus, repurposed into provocative art forms with underlying meanings that are sometimes enigmatic, but always present. 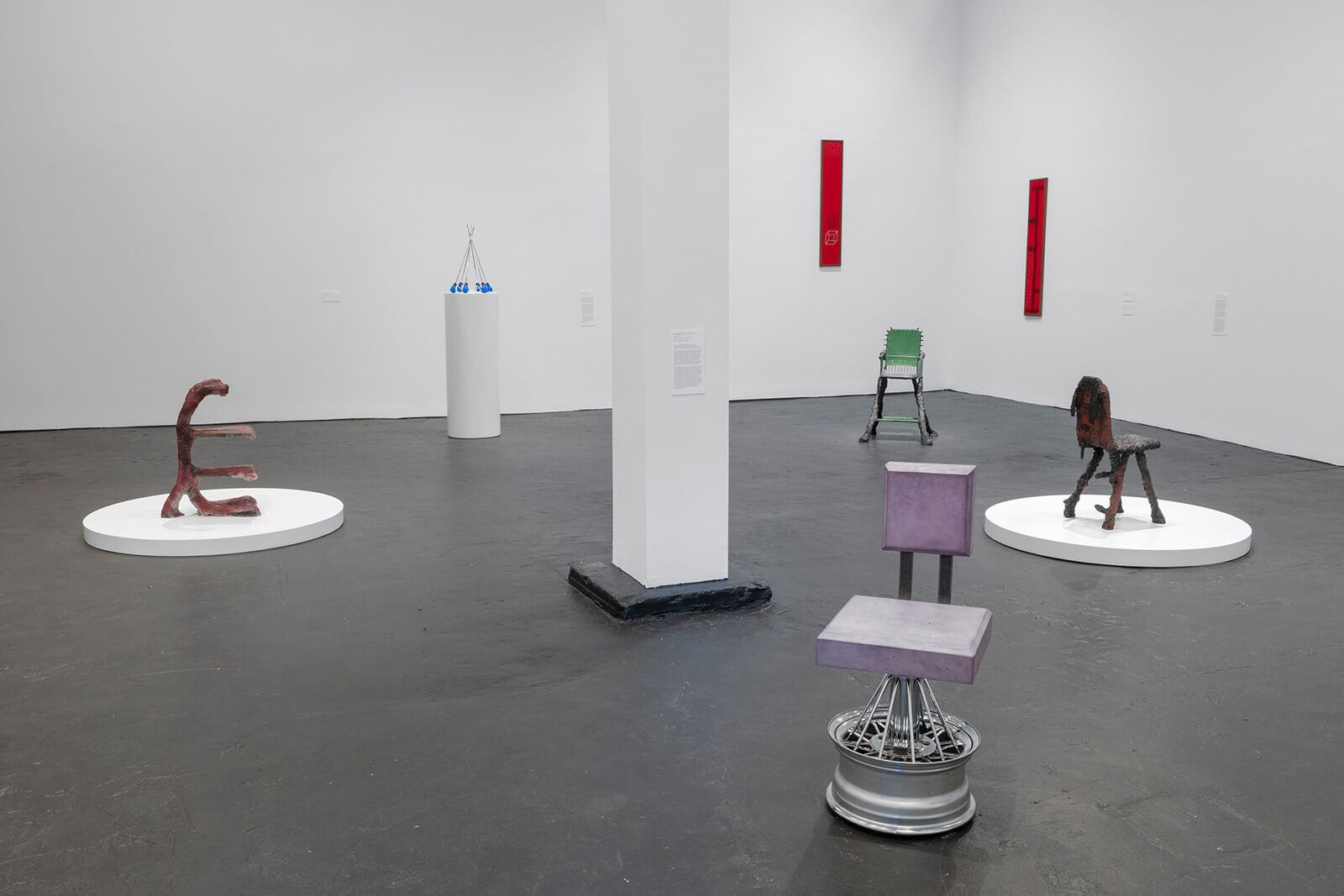 ‘Teepee home (Pro Impact)’, made while the artist was still in school, began with a set of extendable magnets found in a hardware store, over which are fitted miniature boxing gloves, usually sold as hanging car ornaments, the finished piece suggested by a budding artist’s fight to build a career in the arts. 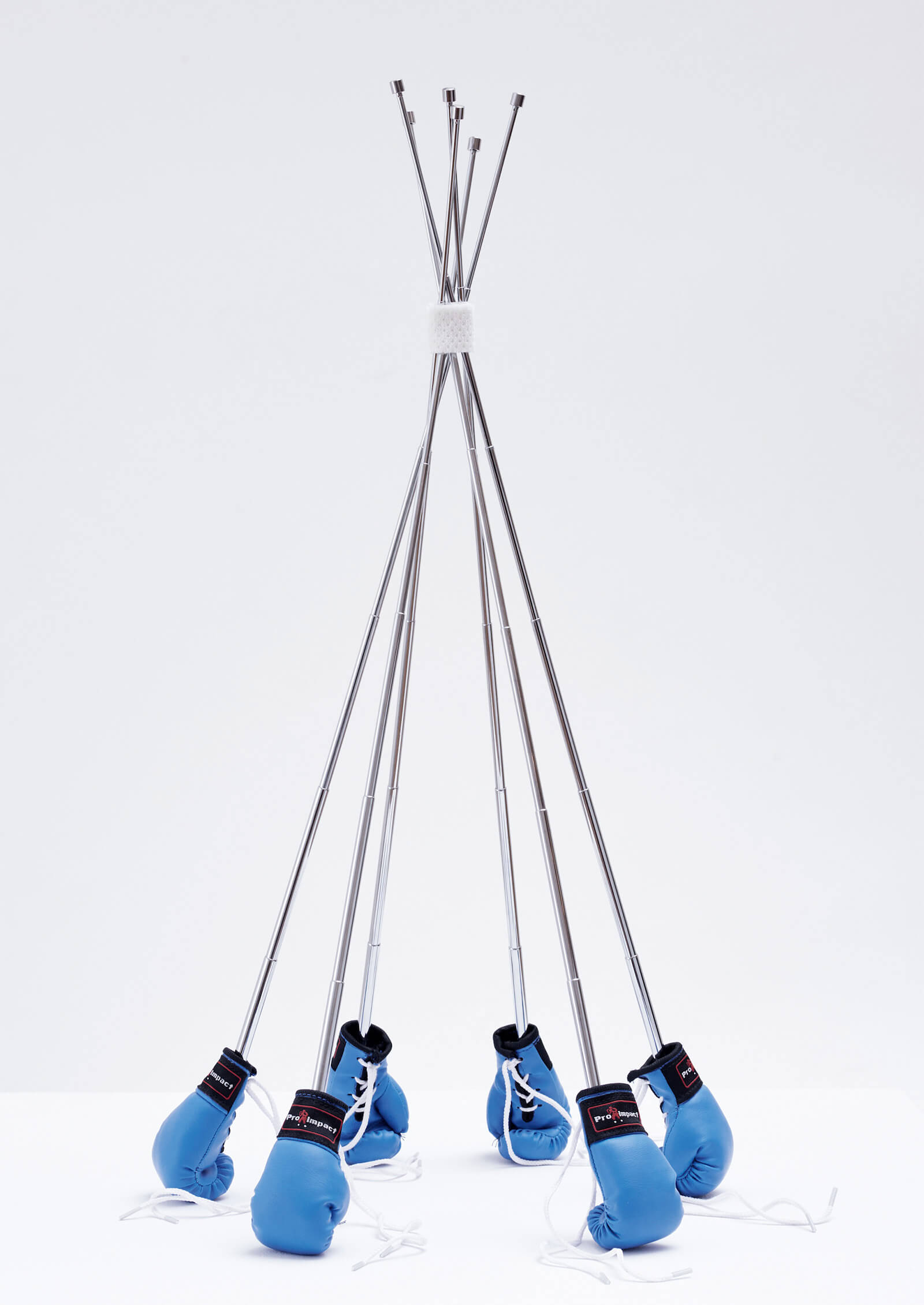 His most-published piece, called simply ‘Chair [iii]’ puts two slabs of purple-painted concrete, one for seat and another for back, swiveling on a shiny steel tyre-rim base, the whole an evocation of customised cars and rap culture in Houston’s African-American communities. In another direction, ‘Chair [ix] (For Babies)’, a discarded high chair is enclosed in hand-sculpted concrete, coloured black, with a back of green aluminum sheets from a Nigerian trunk, woven to evoke African artisanry. The wall-hung works are antique Catholic wood panels covered in red velour and “painted” with staples, in a deconstruction of religious symbolism. 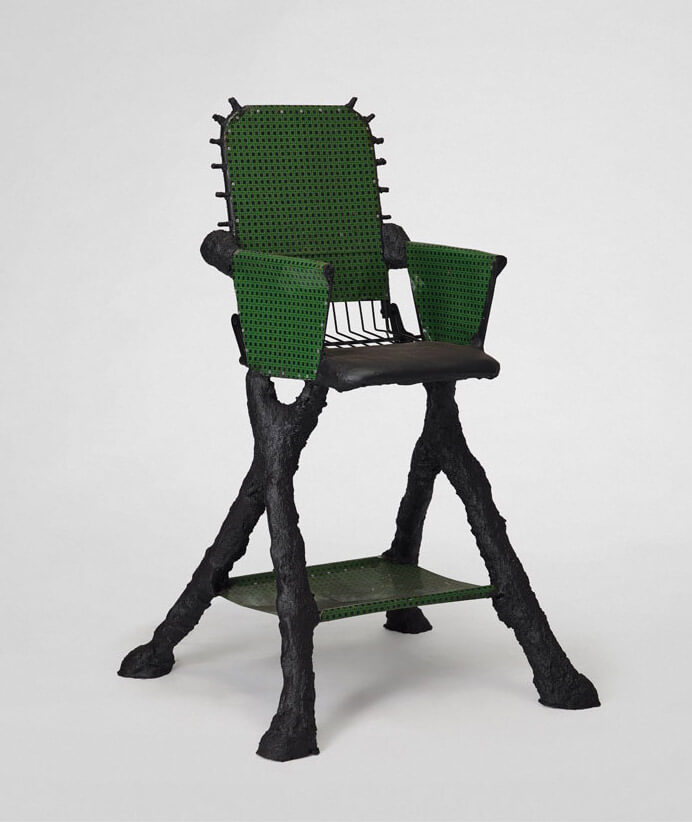 In only his third year of practising full-time as an artist, Kanu is still finding his way: “I’m examining the role of an art object and how it can perform,” noting as inspiration the work of artists like Rachel Whiteread and Scott Burton. He expects his approach to be more explicit in work he is currently developing, which, like the sculptures he showed at the Frieze art fair in London last autumn, move decisively into the strictly-art category – though he rejects the need for classifications.

KANU WAS BORN and raised in Houston, Texas, by Nigerian-immigrant parents, but only visited Lagos for the first time in 2018. He has since been struggling to reconcile his American identify with the African heritage that his parents had always urged him to embrace. In Lagos, he says, he learned what they meant: “It was strange, and exciting, to be surrounded by people who looked like me,” and is working to incorporate that heritage into his work. “I want to infuse the feeling of timelessness into objects seen by consumer-focused Americans,” he says, explaining that, “in America, African objects are regarded as art, but in Africa, all of them have specific uses.” He sees an opportunity to bridge that gap in understanding, incorporating gestures drawn from traditional African crafts into his work. 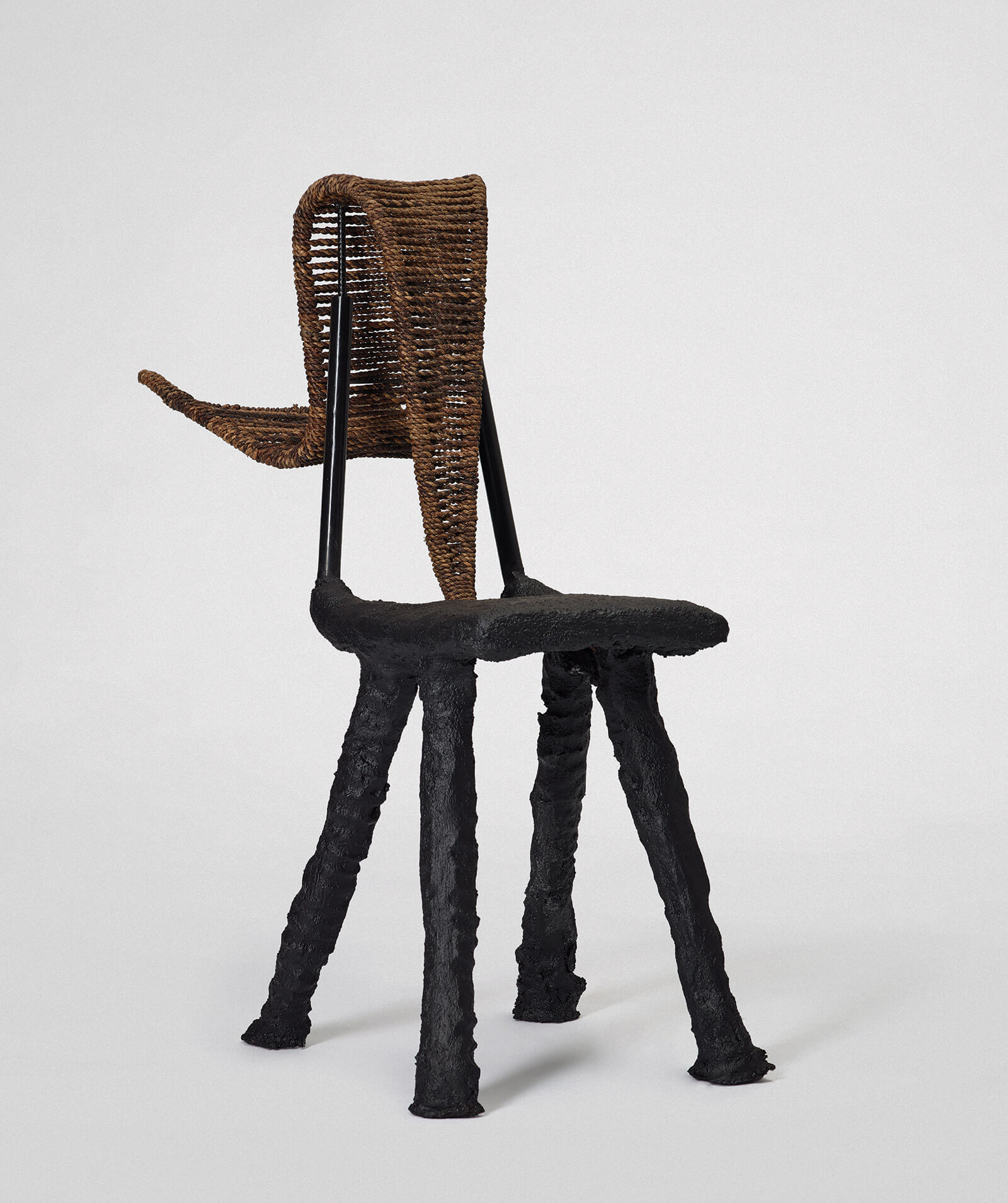 His path to public recognition has been almost accidental. Always artistically inclined, Kanu came to the School of Visual Arts in New York City to study stage design, intending to design sets for Hollywood films, an ambition he quickly abandoned as too superficial. His first job was in the fashion industry, designing backdrops for runway shows, after which his inclination towards more serious art was encouraged by an internship for a Brooklyn art collective. His big break came with an invitation to contribute to a 2017 exhibition in the lobby of Manhattan’s landmark Lever House building. His bench on automobile tyre rims (signals of vernacular hip-hop style in Kanu’s hometown) was featured in the New York Times and jump-started his career, which he now pursues as a bi-continental commuter. 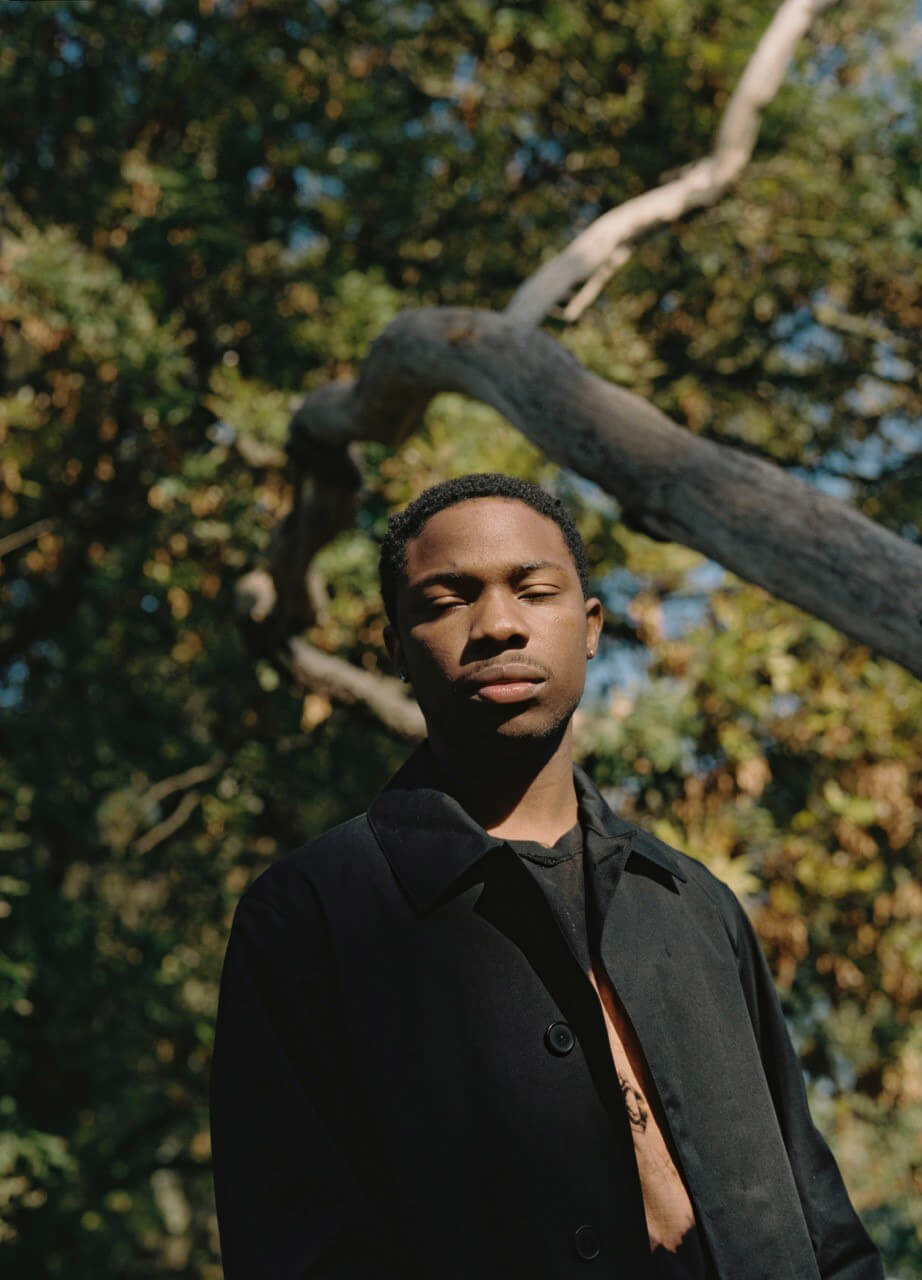 The transatlantic commuting happened by chance. On a fellowship in Portugal, Kanu happened on a bargain-priced warehouse space that would have been unaffordable back home. Near both a marble quarry and a manufacturer of concrete paint, it gave easy access to materials he used in his art, so he rented it for a studio. He spends part of each month working in the small town of Azoia de Cima, returning to his Brooklyn apartment to recharge and develop new ideas.

Despite the considerable media attention given to his work, Kanu’s career is still in its early stages. The Studio Museum exhibition will remain on view until 15th March this year, and it’s fair to predict that the art world will see more of his thought-provoking sculpture in years to come.

Studio Museum in Harlem – an American art museum devoted to the work of artists of African descent. 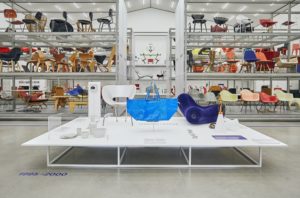 Exhibitions
After the Wall: Design since 1989
Thirty years ago the Iron Curtain started to buckle. As this show reveals, the impact of that moment has resonated on every level - including design.
By Anna Sansom

Exhibitions
Chairs Beyond Right & Wrong
A lively exhibition that purposefully blurs the line between artist-made and designer-made pieces.
By Judith Gura 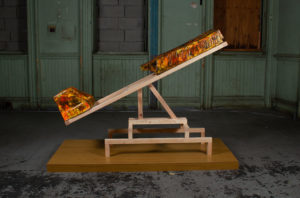 In The Studio
Wentrcek Zebulon
The Design Edit catches up with the designers as they leave their darkened studio, which represented an era of bold, material-led experimentation.
By Daisy Alioto
The Design Edit
For Collectors and Dreamers
Read
Connect
Legal
Join Our Bi-monthly Mailer
Follow and Share
© 2021 The Design Edit.
All Rights Reserverd