Brecht Wright Gander reports from Basel … are you sitting comfortably? 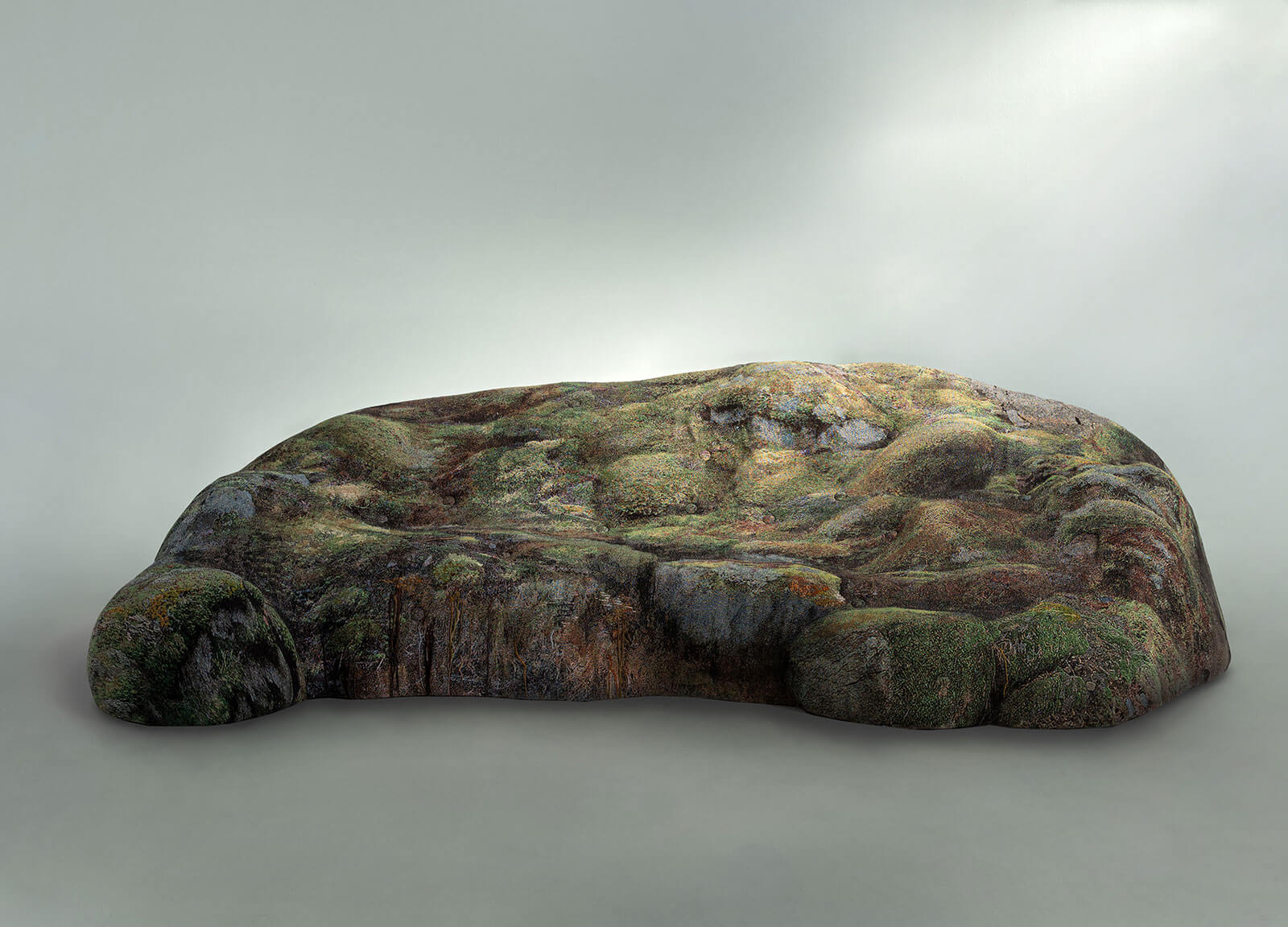 DESIGN, PARTICULARLY FURNITURE design, may seem an odd field to take up the problems of the “non-human centric,” to use the phrase of Aric Chen, Design Miami/’s curatorial director. What, if not a human butt, might a chair be addressed to? A great many things, it turns out. For Design Miami/Basel, three studios in particular – DRIFT, Front and Matthew Lehanneur –  directly addressed the curatorial theme of “Human Nature” and investigated how object design can engage with issues of greater scope than posterior-support. 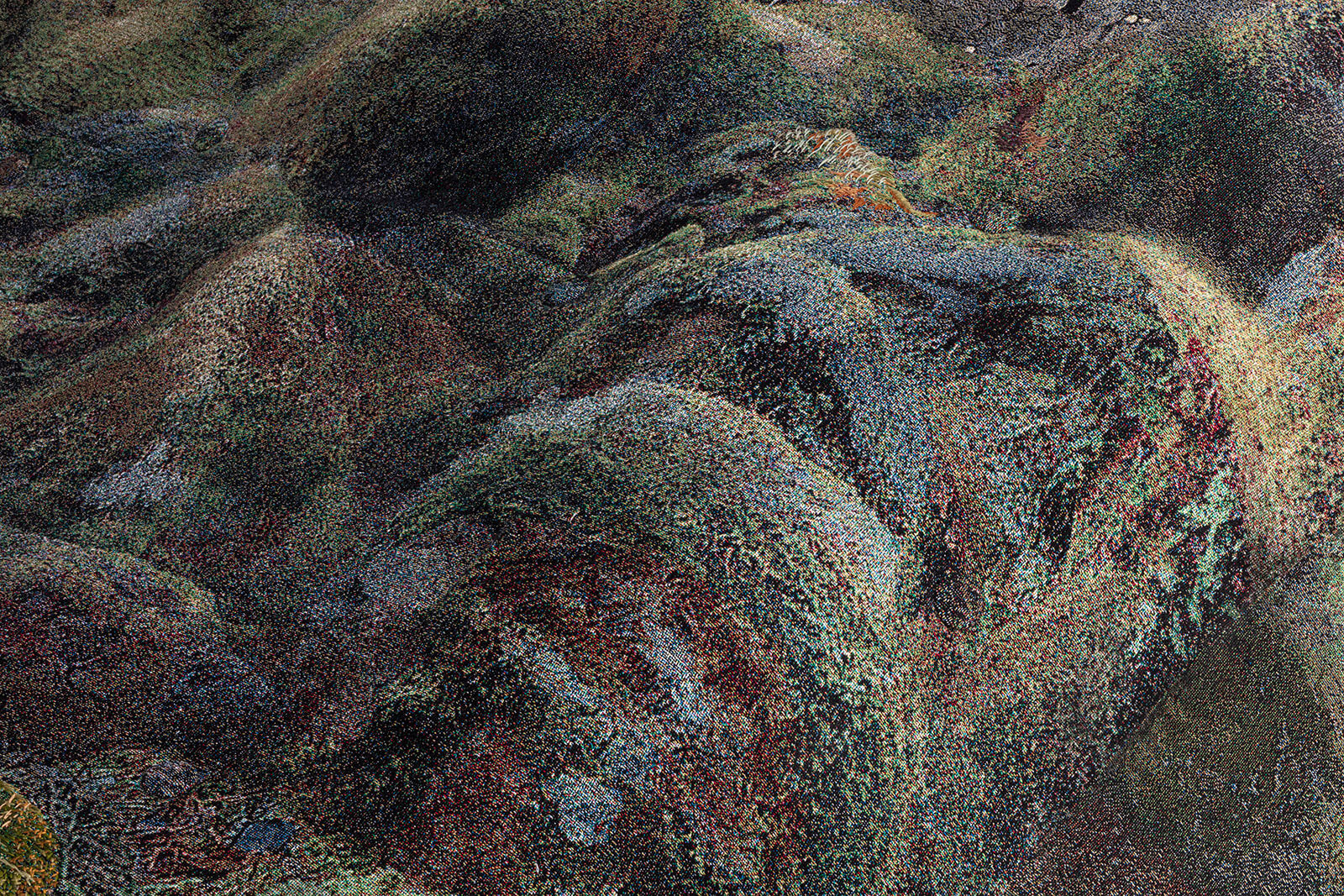 On first encountering ‘State of the World’, Mathieu Lehanneur’s enigmatic installation of patinated black aluminum objects arranged on a stepped semicircular plinth, I found the apparent divergence from his oeuvre (he is known for ocean-like relief carvings in stone tables) jarring. 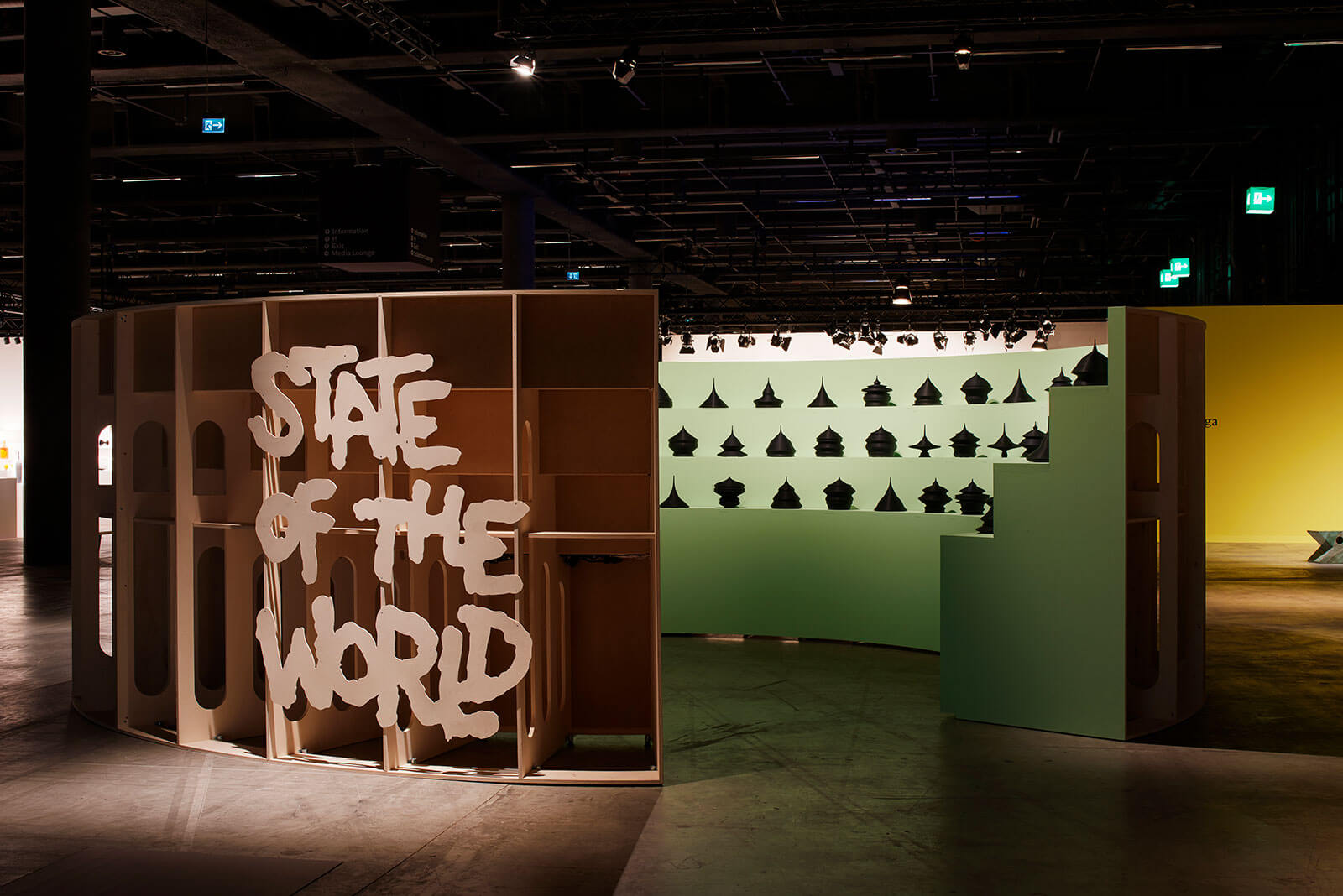 His iconic tables, which can easily be taken for exercises in glamour, became more interesting to me, however, in view of his latest debut. What the new illuminates in the old is a preoccupation with digitising earthly phenomena, manipulating it, and then rendering it back into corporeality. 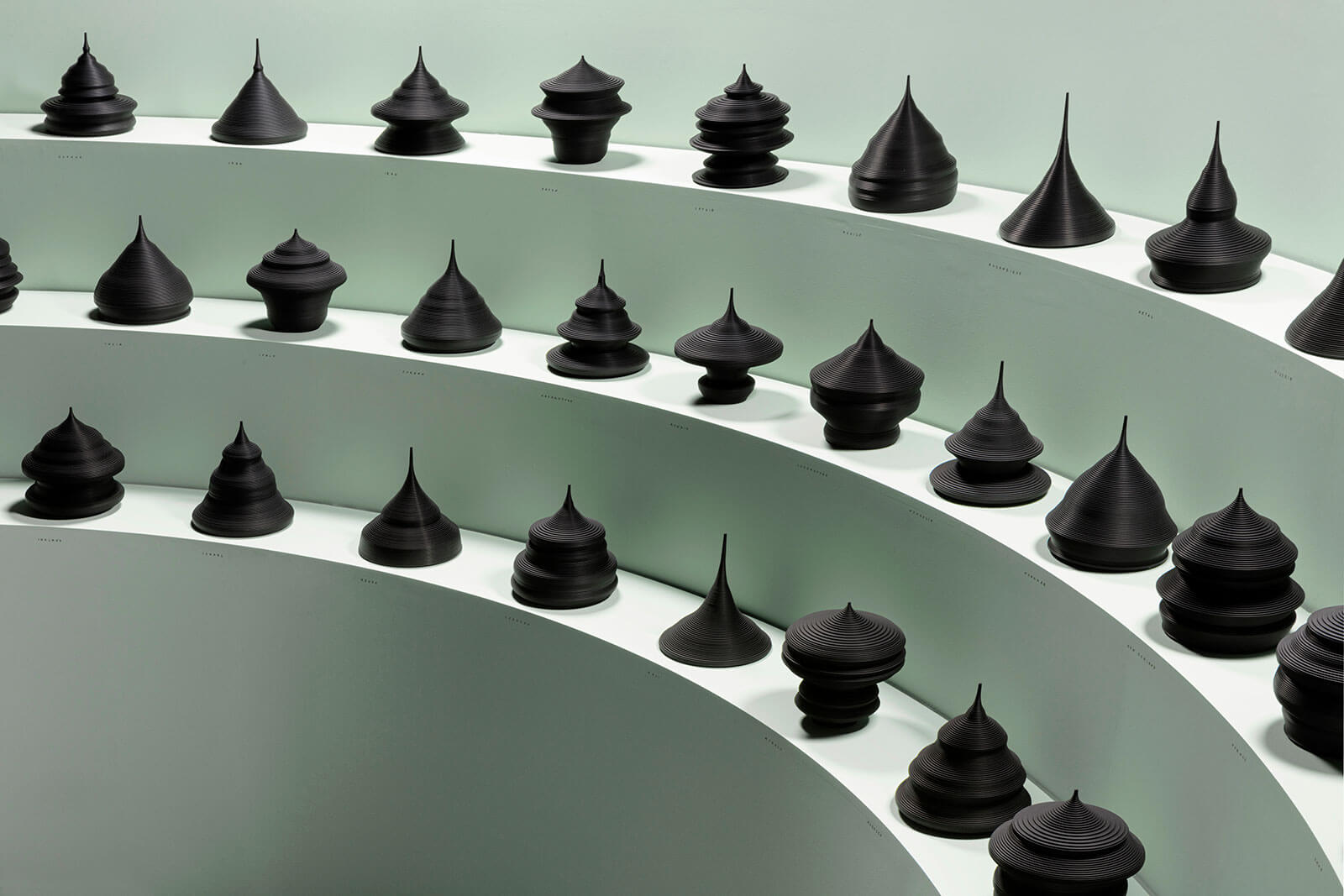 ‘State of the World’ consists of totems that resemble the stepped spires of Khmer temples. The objects, roughly the size of funerary urns, represent a given country’s age demographic according to the most recent data – for instance, the storm of bloodletting carried out by the Khmer Rouge is marked by a sudden narrowing in the waist of the totem representing Cambodia. Lehanneur calls them “age pyramids”. 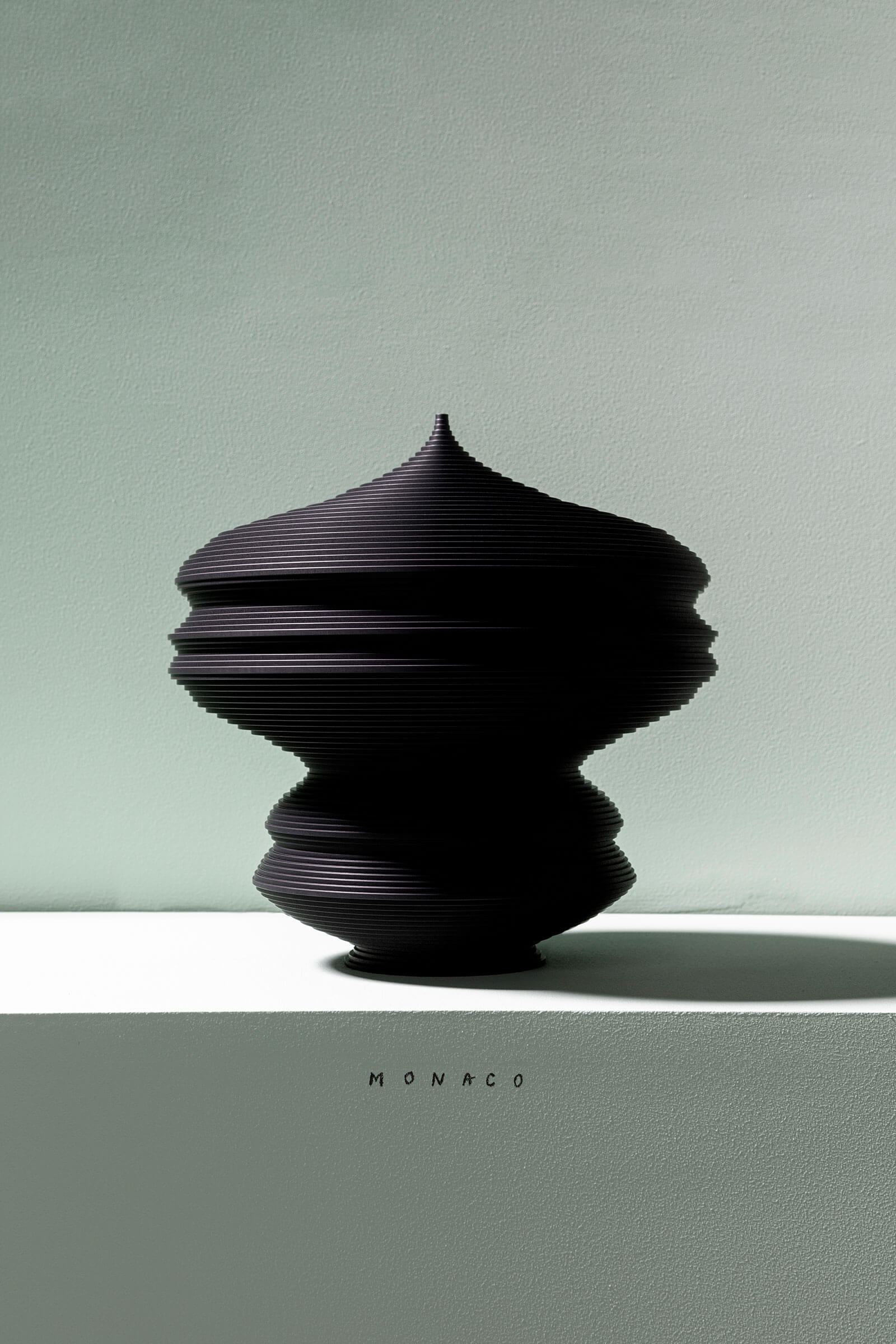 Rich countries such as the USA are flat stumps; Americans are likely to live long lives. In Chad, where infant mortality is a scourge, there is a precipitous narrowing of the spire almost from its base. 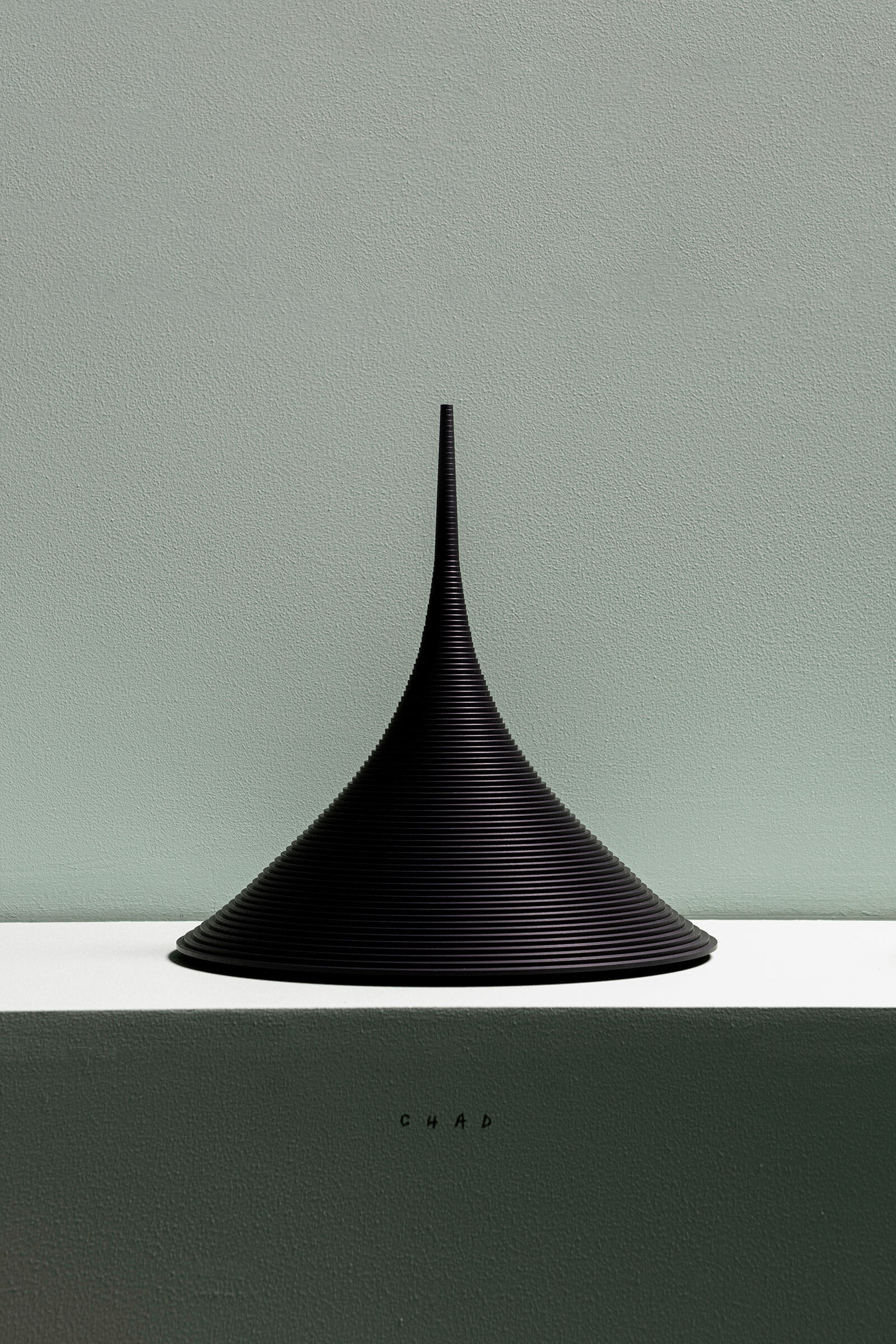 I hate explanatory exhibition texts. Too often they betray a lack of confidence in the unique language of visual art, which after all has its own voice. However, in Lehanneur’s project, the made objects and the explanatory writing exist in a relation of productive mutual support – his research is made palpable through his totems – and the totems gain force through familiarity with his research. Infographics and data visualisation are a surprisingly sexy field at the moment and Lehanneur’s project is smart to boot. 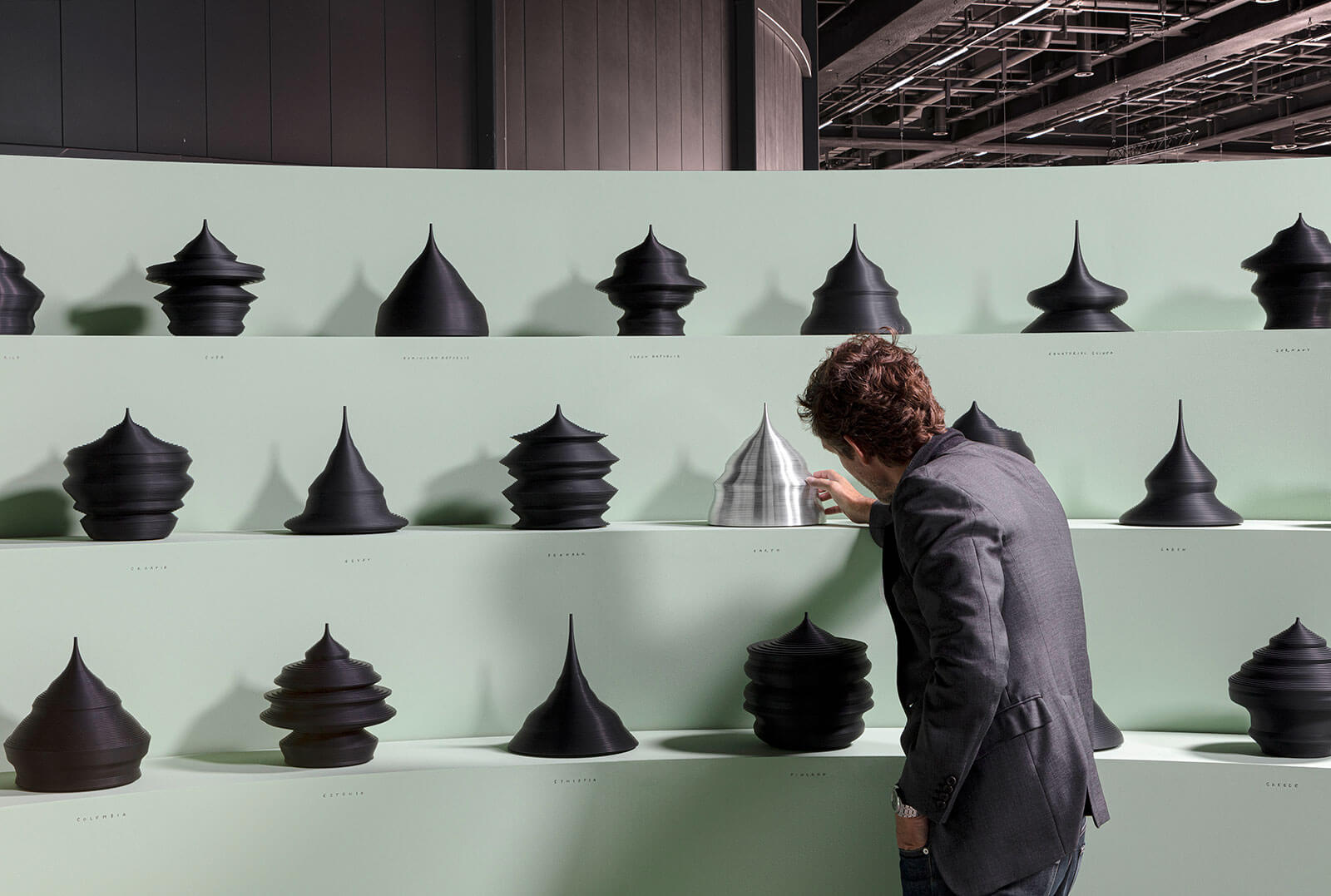 Front Design also emphasises exchanges across the digital and manifest realities. Their presentation, ‘Design By Nature’, features upholstered seating made through a process that began with 3D scans of mossy boulders. The fabric surfaces, developed in collaboration with Moroso, are lush and lux patches of lichen green and earthy brown boucle. 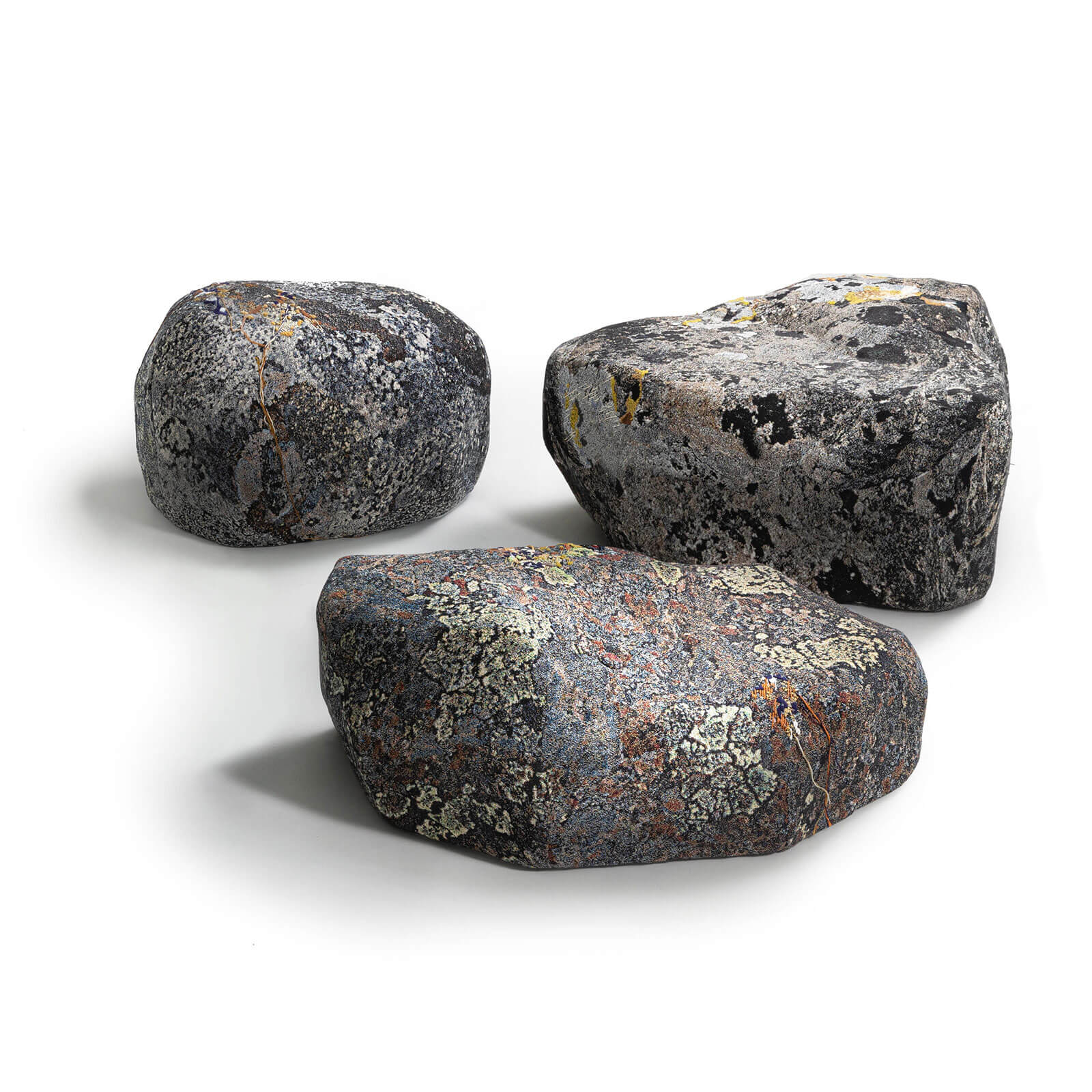 Design processes that involve limited human input are an important current in contemporary industry. Mycelium and other fungi are being explored for their potential in creating “grown” objects, for instance. Of course, another way to grow an object is with additive manufacturing, a technology that Front also explores. Their presentation included several vessels which were created by 3D scanning wasp nests and printing the collected data in a wood fibre infused plastic filament. I found these objects, which had partially slumped in on themselves, to have a surprisingly organic and poetic quality – quite distinct from the pristine geometries with which additive manufacturing is more often identified. I do not know if the metaphoric symmetry was intentional, but it is certainly apt to note that wasps are themselves printers of wood fibre. 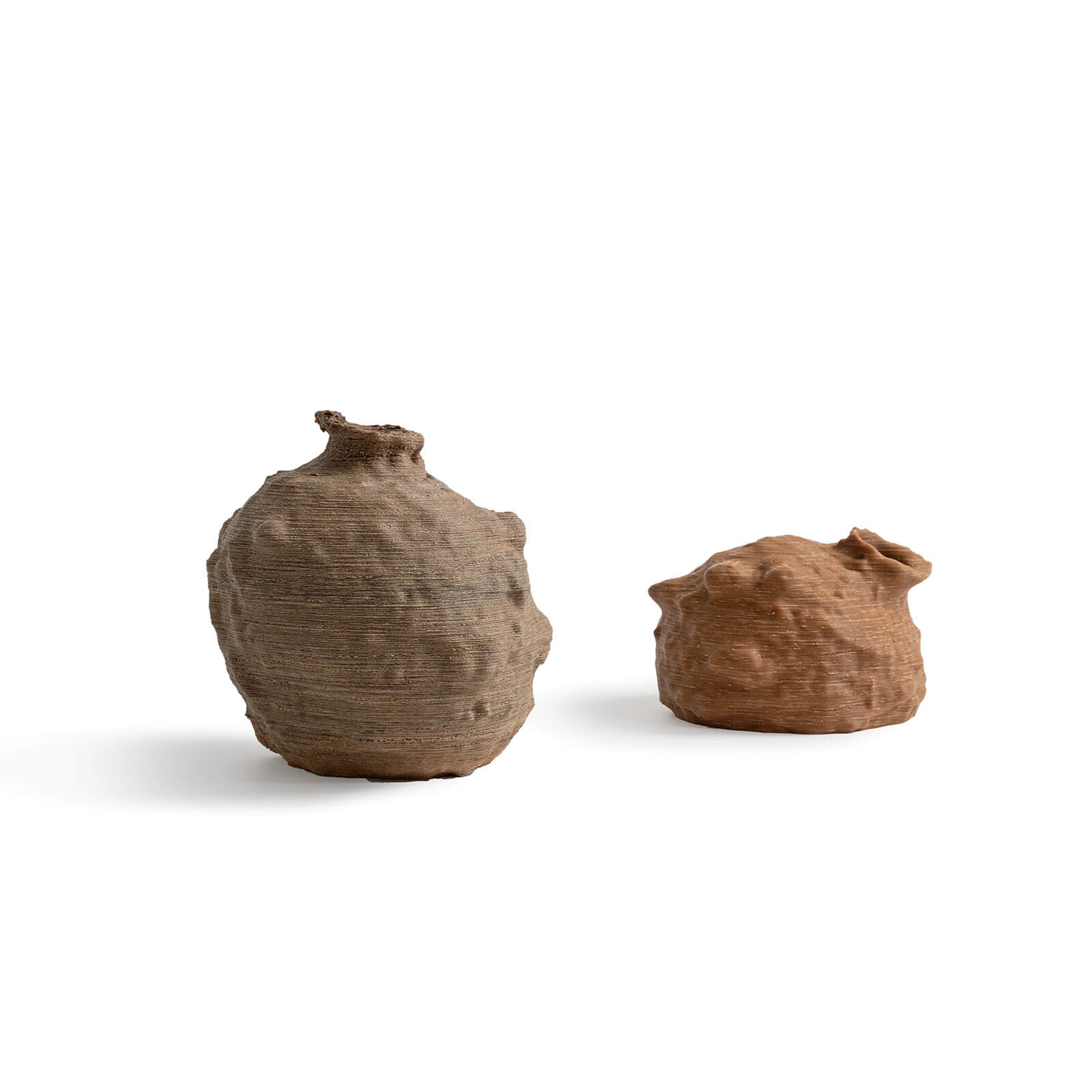 To get to the area where Lehanneur and Front were presenting their work, Design Miami/Basel visitors had to pass through the entry hall below a monumental ceiling-hung installation by DRIFT. From luminous drone arrays programmed to move like clusters of starlings to dandelion-LED hybrids, DRIFT has long been preoccupied with the ways high technology does not merely simulate nature but also reformulates it. Their presentation, ‘SHYLIGHT’, involved a grid of illuminated fabric apparitions that expanded and dropped precipitously in vertical space, then retracted and regathered into tight bundles perhaps twenty feet overhead. This was done in a choreographic sequence set to piano music. In the cavernous black room, the work lacked a certain intimacy – this is not to say the wonder of the work was entirely lost. A resonant idea is here, congealing and dancing in animatronic motion: the further we move towards autonomy in robotic design, the more we must question what is, or isn’t, distinctive about being human. 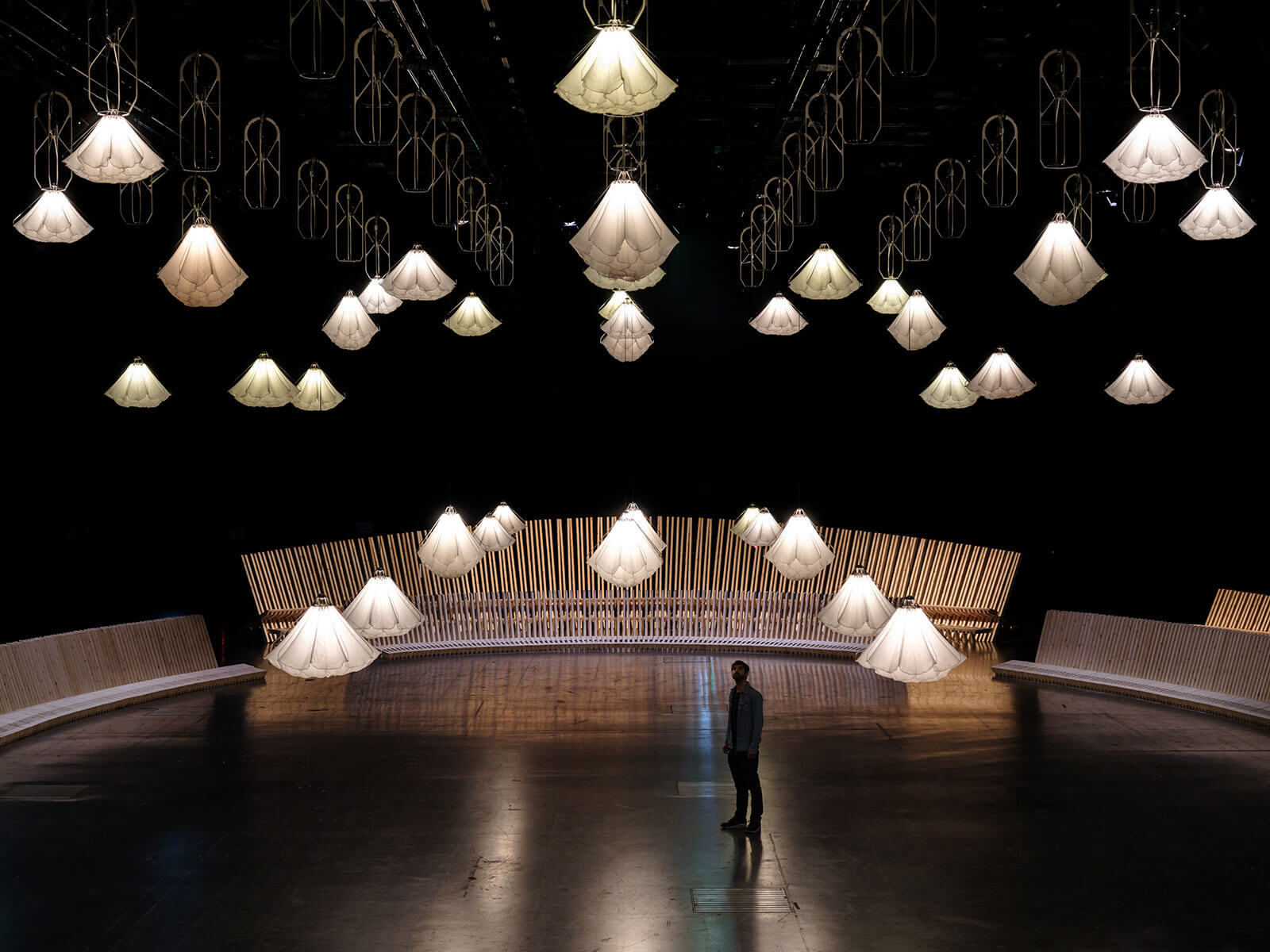 ‘SHYLIGHT’ began in 2006 shortly after DRIFT founders Lonneke Gordijn and Ralph Nauta graduated from Design Academy Eindhoven. Five generations of the design have now been produced – an enormous amount of research, trial and development have gone into making it perform consistently without it feeling predictably mechanised. The flutter of the fabric as it falls through the air is a collaboration between the unpredictable and rigorously controlled motor systems, which are largely exposed to view.

Sou Fujimoto was commissioned to create an accompanying installation, resulting in several elliptical arcs of plywood seating positioned below SHYLIGHT, from which sitters could gaze upward. If, that is, said sitters weren’t consumed with trying to configure their bodies in a way that wasn’t impossibly uncomfortable. I don’t know if Fujimoto hates butts, but his installation seemed intended to punish them. Gaps and differences in plane between the plywood layers undermined their supportive function. The angle of the backrest seemed to suggest a quasi-supine position, like a recliner, however because the seat itself remained distinctly upright, the ergonomics seemed to be tailored to people without bones. Perhaps this too is “non-human centric” design. 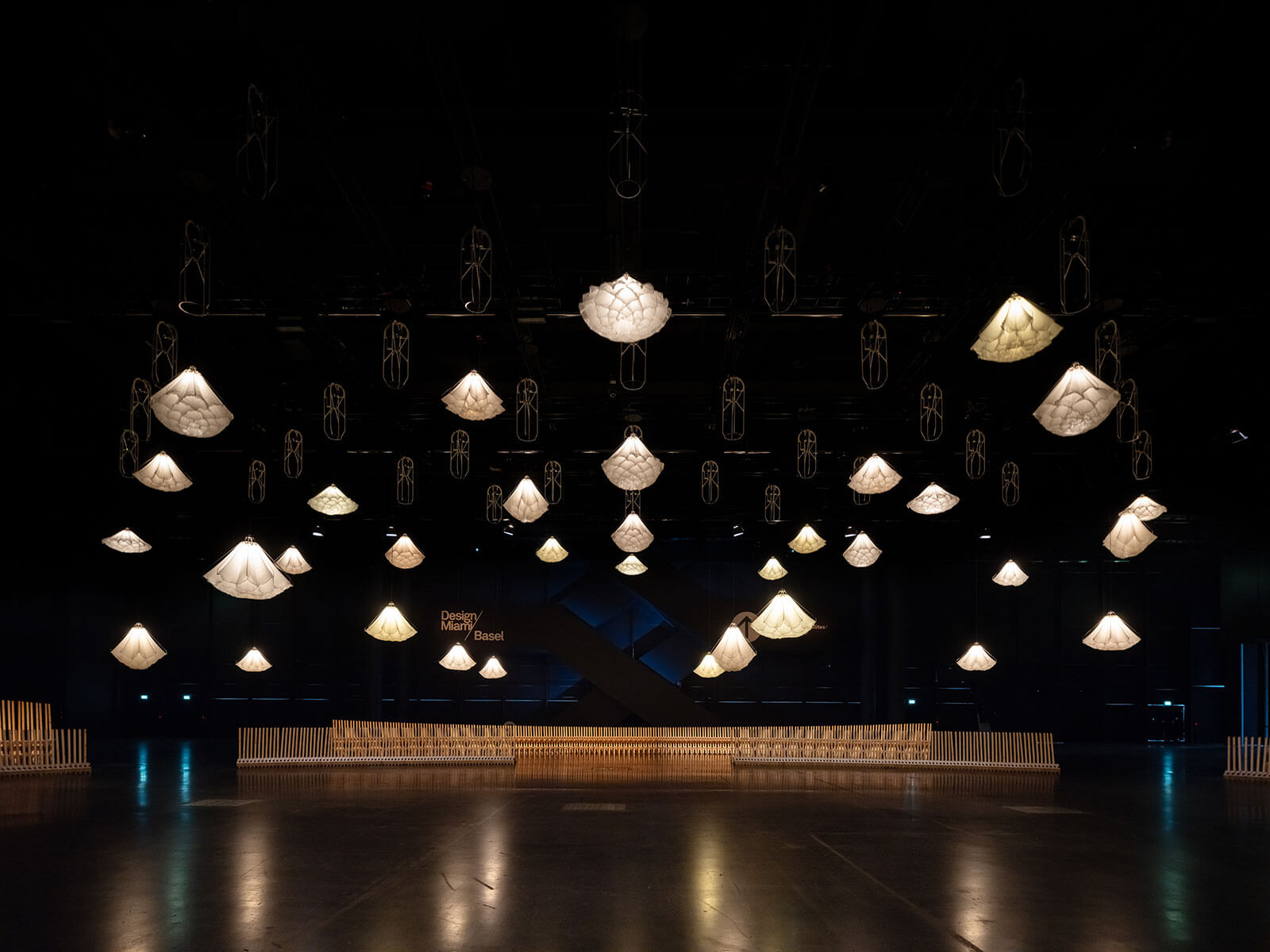 The post-human is a particularly interesting vein in contemporary culture in that it is, in some ways, both complement and foil to the politics of identity. Rather than magnifying focus on constructed categories, post-human discourse offers a potential release valve – de-centring humanity altogether. Rather than a vision of humans shaping their environments into human ideals, perhaps we should consider ourselves and nature as synonymous. As the Portuguese poet Fernando Pessoa has it, “I don’t know what Nature is, I sing it.” 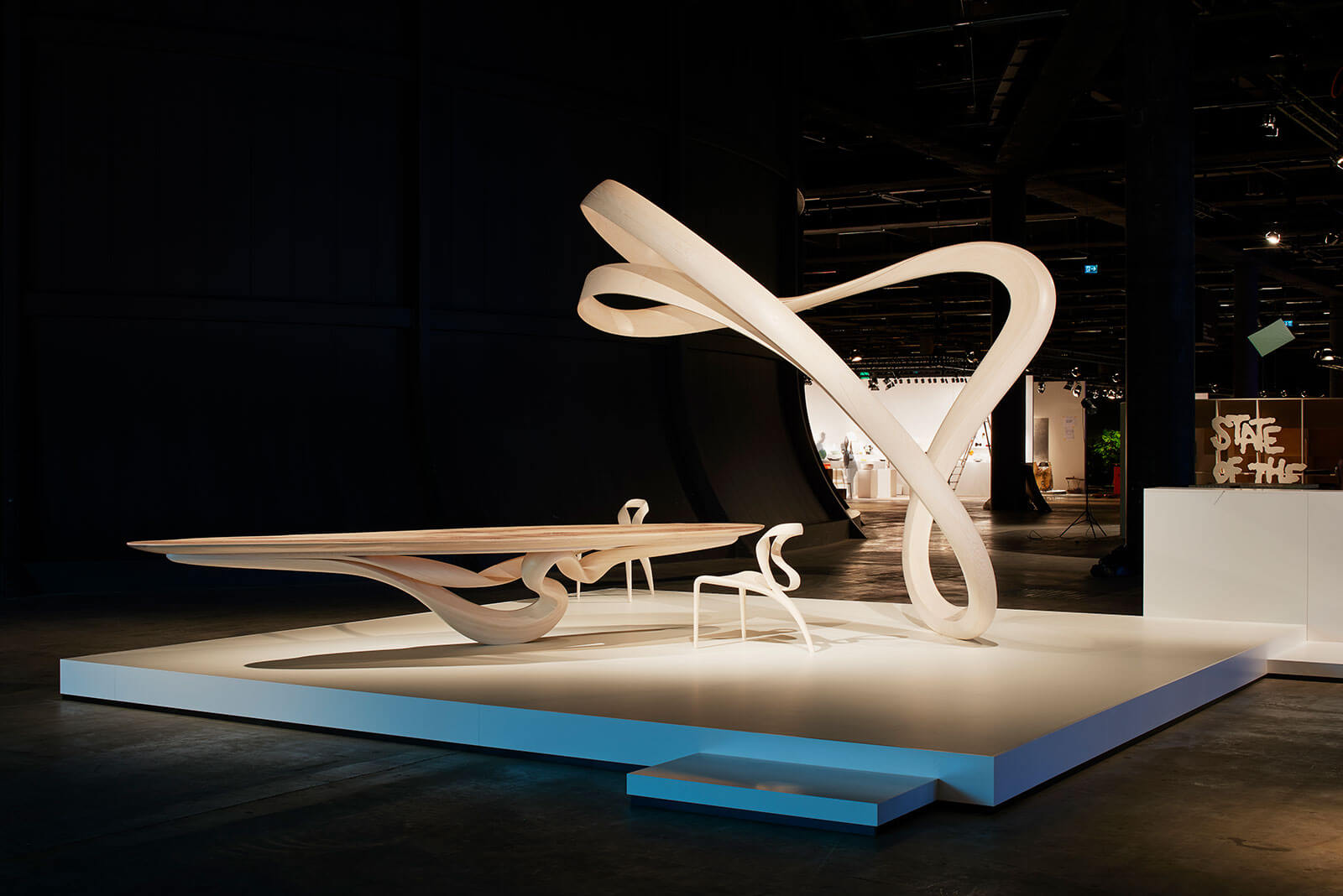 TDE TV interviews Lonneke Gordijn of DRIFT about their installation at Design Miami/Basel 2021. 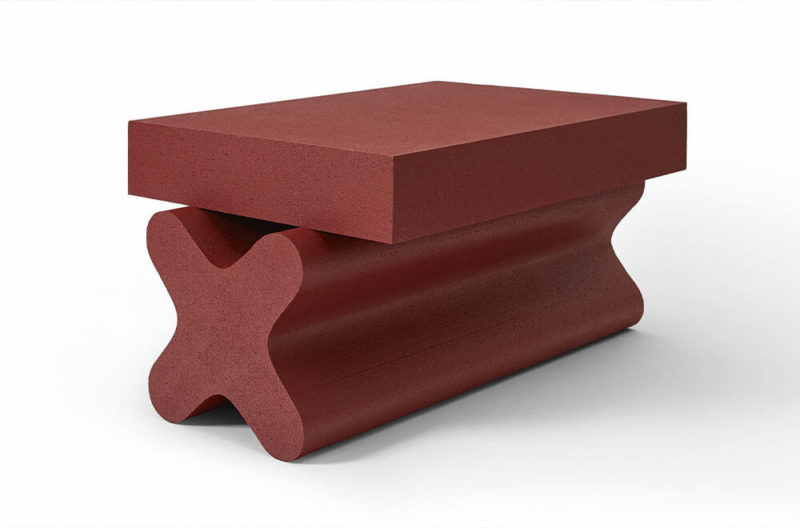 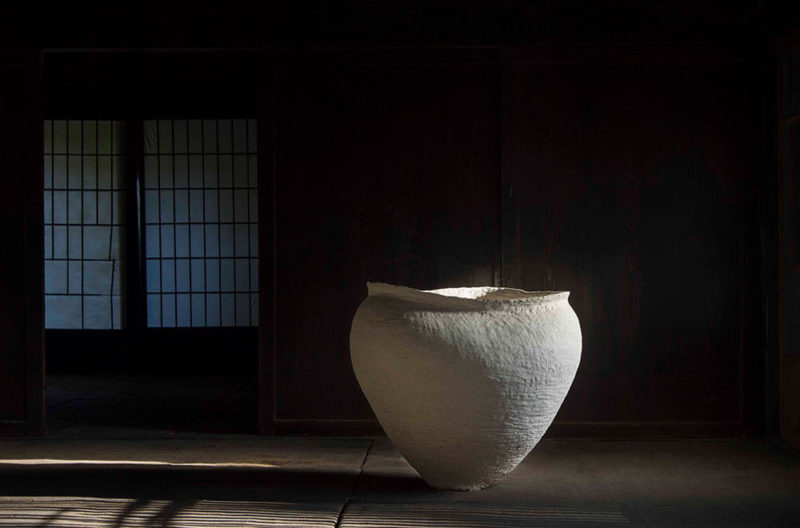 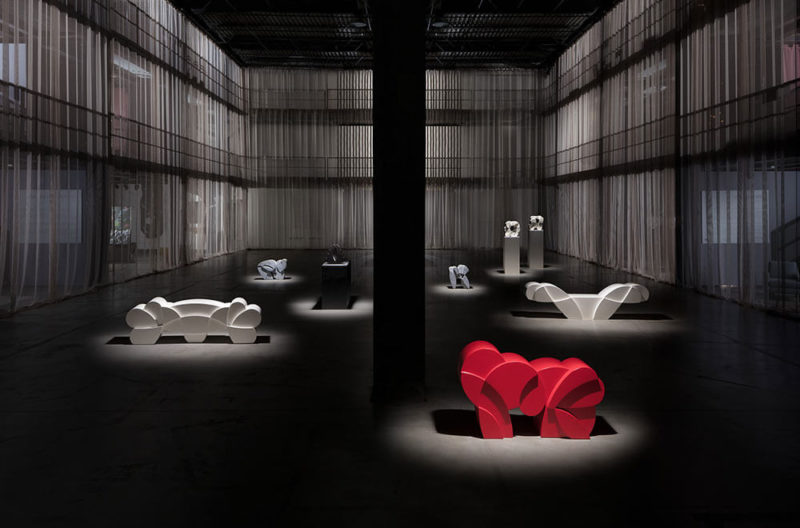 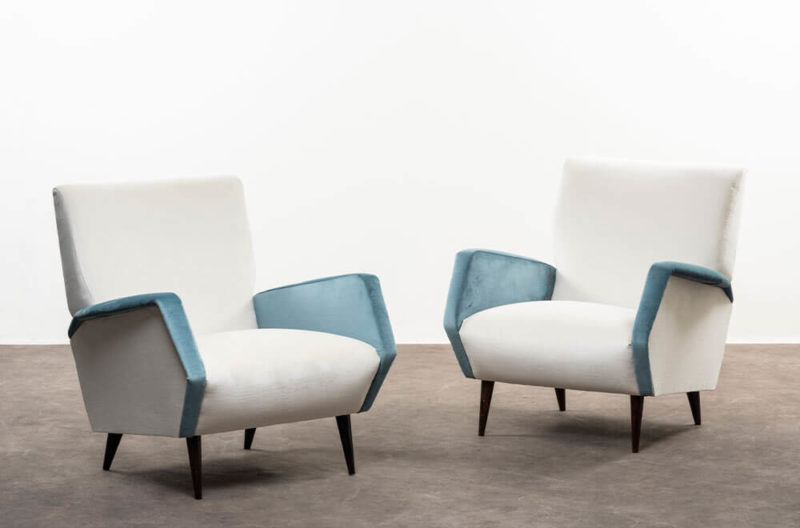 FAIR REVIEW / Miart: The Milanese fair of art and design was marked by a buoyant mood and engaging curation.

By Emma O'Kelly
The Design Edit
For Collectors and Dreamers
Read
Connect
Legal
© 2023 The Design Edit.
All Rights Reserverd
We use Actito as our marketing automation platform. By clicking to submit this form, you acknowledge that the information you provide will be transferred to Actito for processing in accordance with their Privacy Policy and Terms. The Design Edit will use the information you provide on this form to keep you informed with announcements and updates. You can change your mind at any time by clicking the unsubscribe link in the footer of any email you receive from us. We will treat your information with respect.