‘Against Nature’ at MO.CO. Panacée, Montpellier
Until 4th September 2022 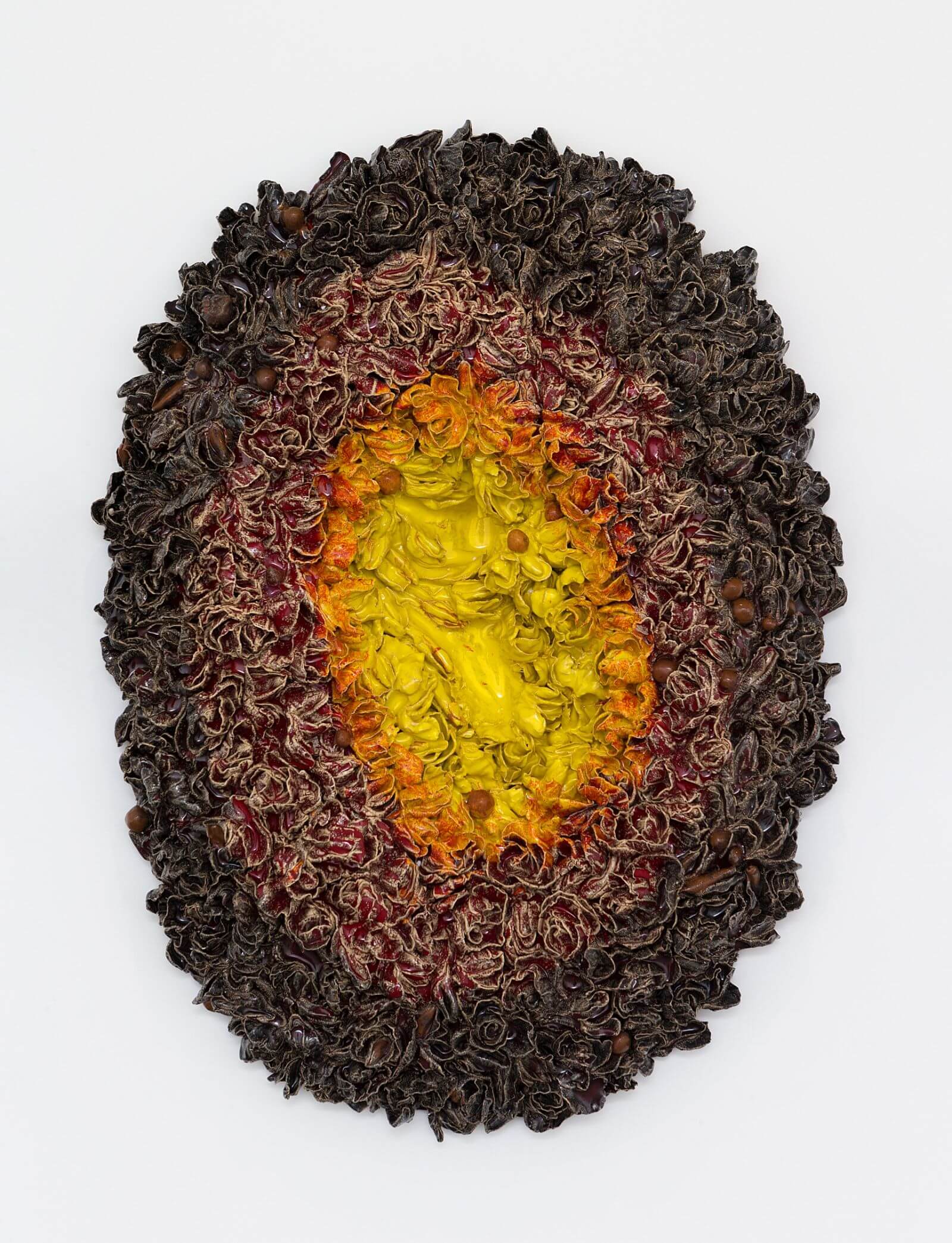 THE FRENCH RIVIERA has a strong relationship with ceramics. Pablo Picasso and Fernand Léger are just two of the numerous artists who fell under the region’s spell and created ceramics here. Now that the tactile medium is enjoying a renewed peak of popularity, two exhibitions in L’Isle-sur-la-Sorgue and Montpellier approach it in complementary ways. Sixteen of the artists are present in both shows, and several of the works on view will be familiar to The Design Edit ‘s regular readers. 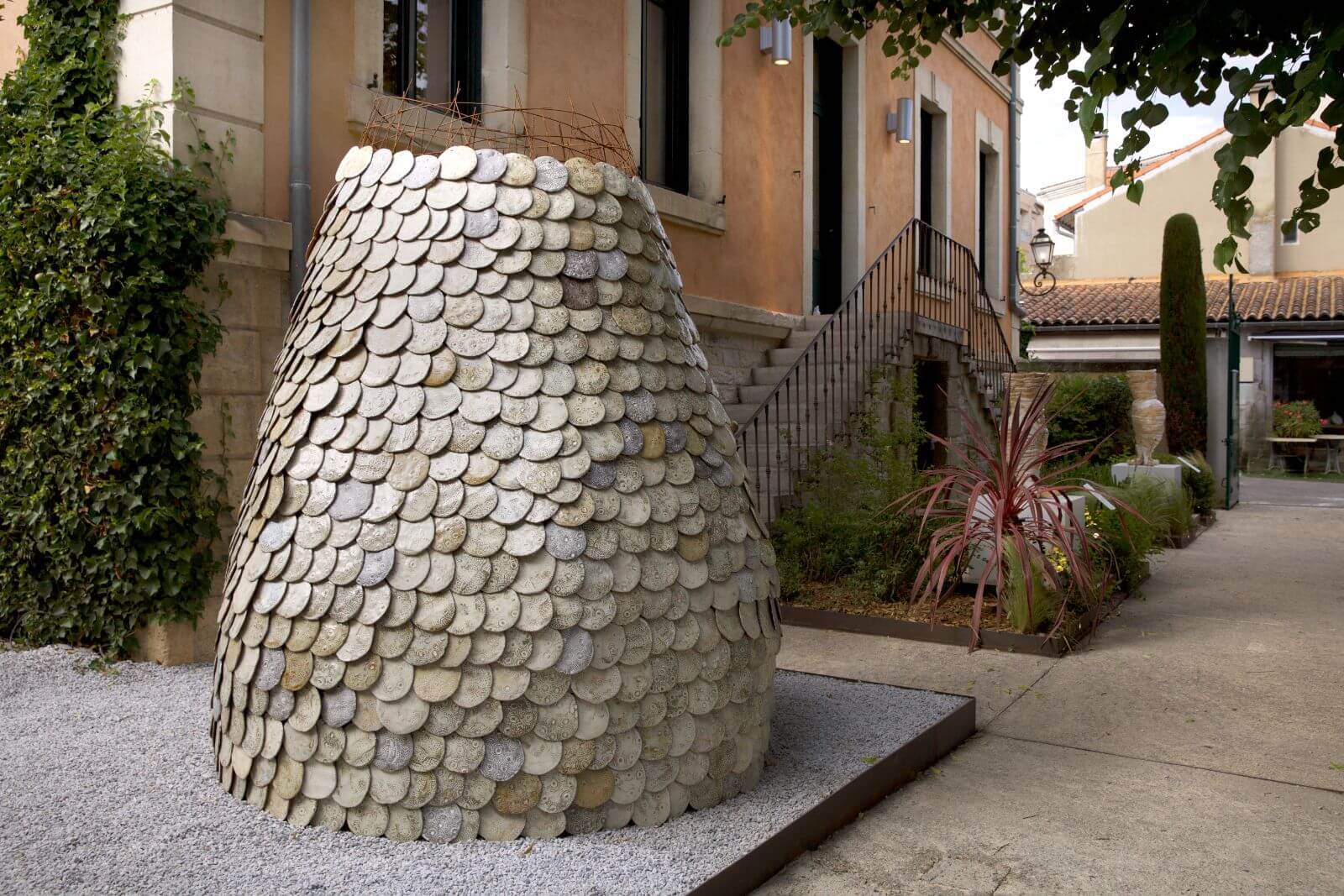 Glass is another medium for which the French Riviera is renowned – the charming medieval village of Biot (near Nice), for instance, has been engaged with glassblowing since the 1950s. Local glass artist Antoine Pierini is celebrated with a solo show in the splendid Villa Kérylos in Beaulieu-sur-Mer, where his striking sculptures converse with the Greek character of the villa. 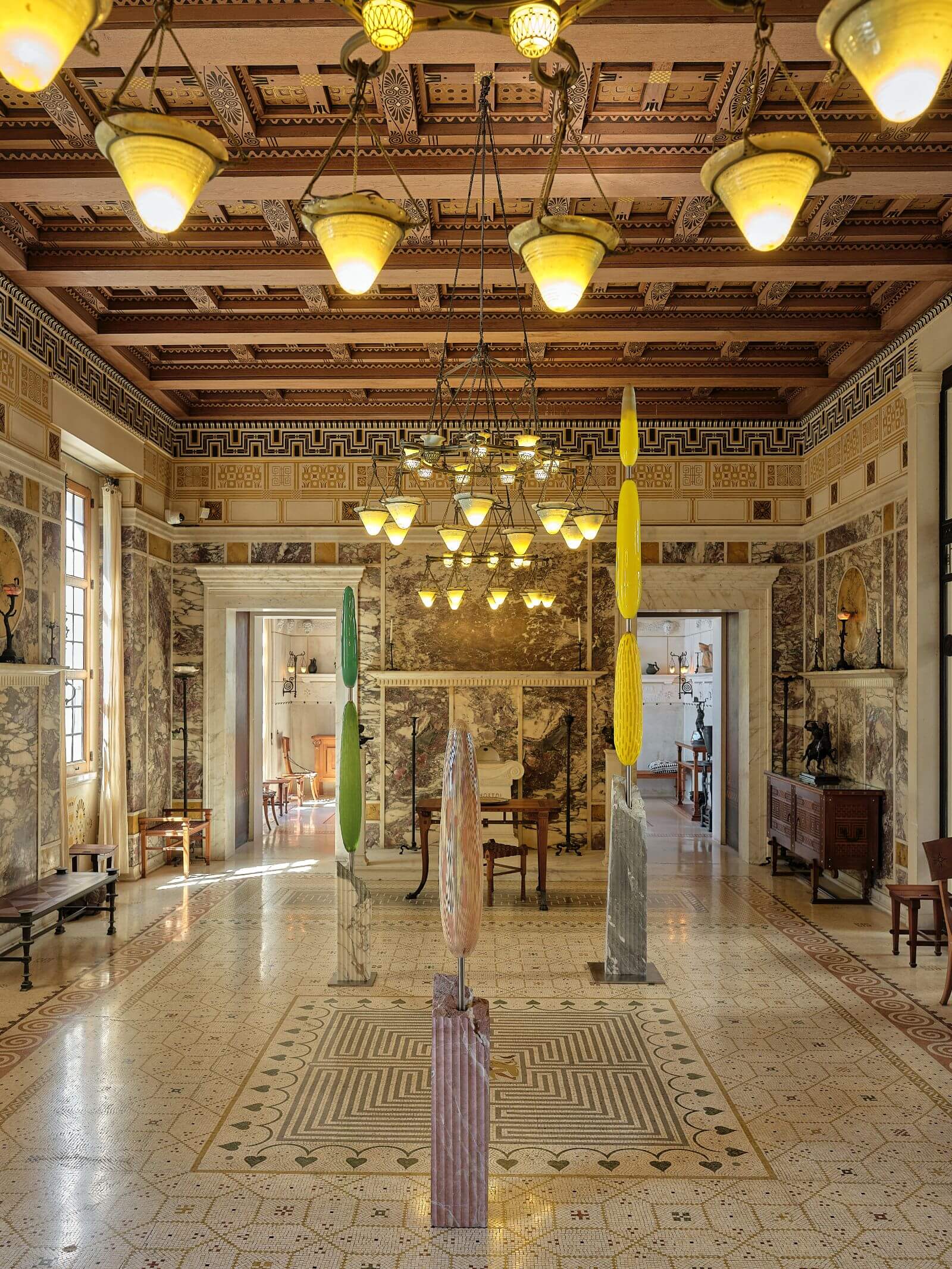 ‘Touching the Earth’ at Fondation Villa Datris, L’Isle-sur-la-Sorgue
Picturesque L’Isle-sur-la-Sorgue – a Provençal town on the banks of the river Sorgue, with canals gently flowing through its centre – is best known for its antique dealers. Yet lovers of contemporary sculpture flock here too, notably to visit the Fondation Villa Datris. Housed in a nineteenth-century mansion, the foundation was created in 2011 by Danièle Kapel-Marcovici, president of a packaging distribution group, and architect Tristan Fourtine. It stages annual exhibitions by a range of artists, from sculptor Niki de Saint Phalle to textiles doyenne Sheila Hicks. 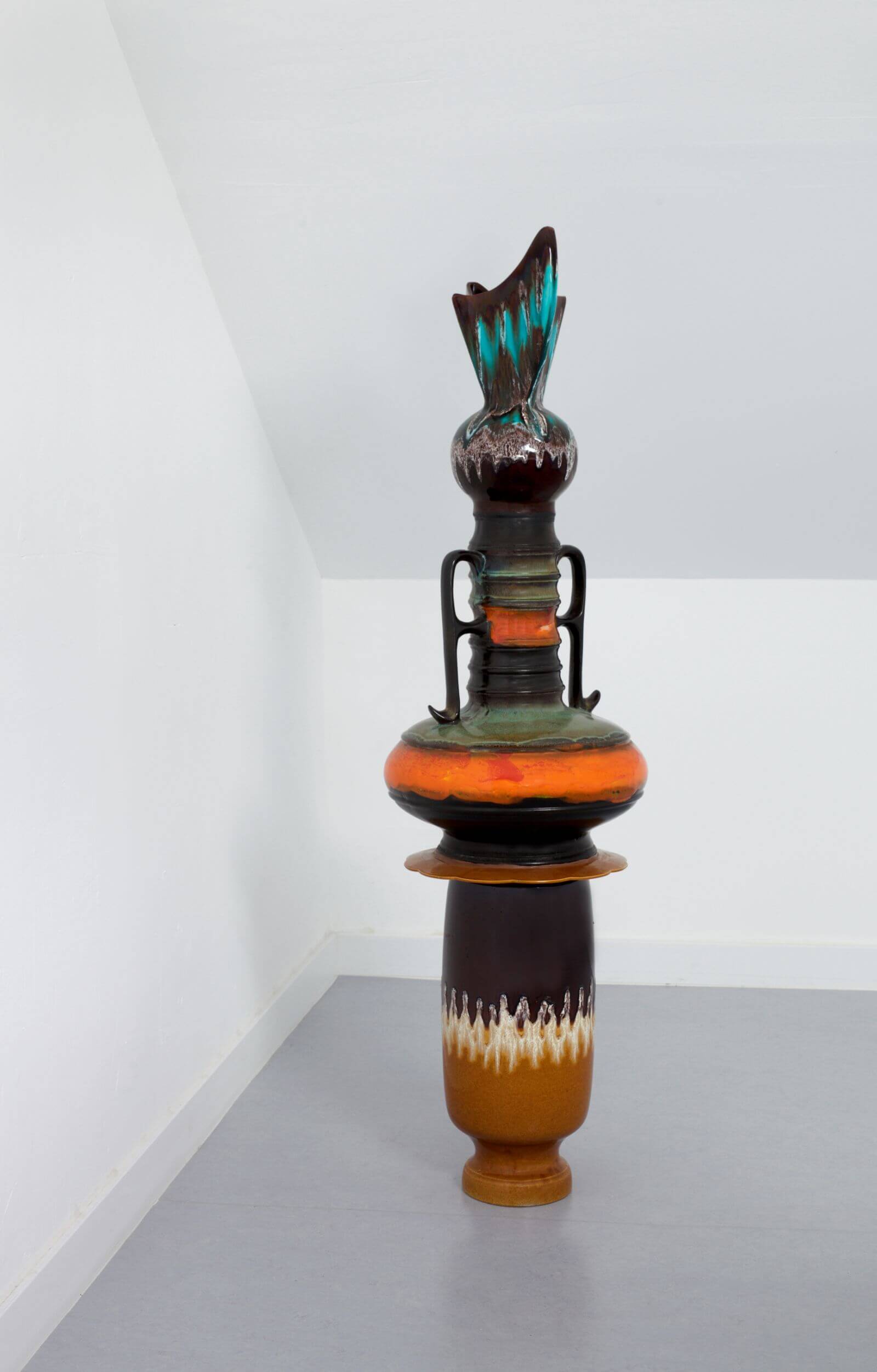 This year’s exhibition, ‘Touching the Earth’, features works by more than 100 artists and ceramicists. While most of the works featured are loans from private collections, artists and galleries, several pieces were acquired by the foundation for the show. 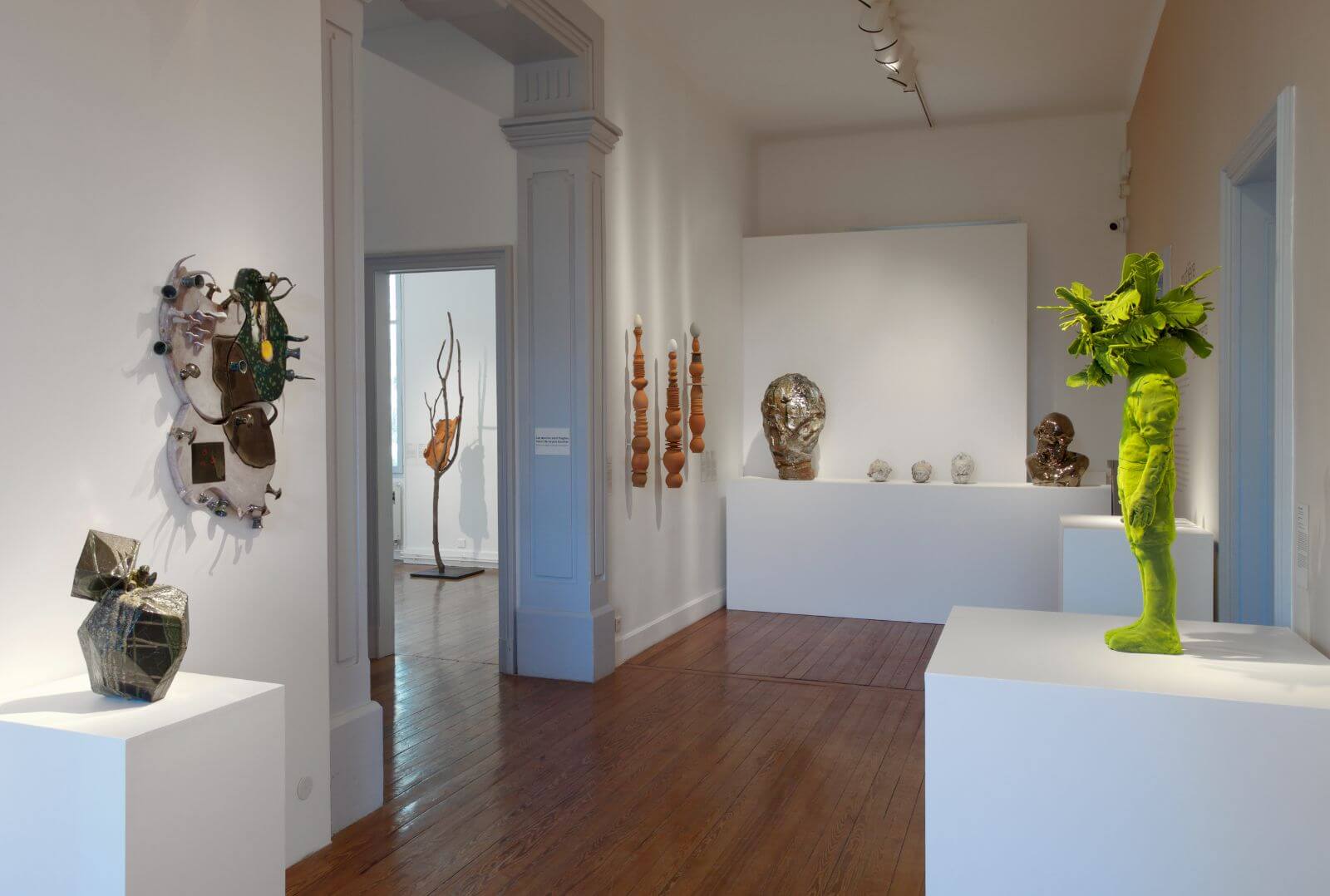 What’s astonishing in the abundant works on display is the diversity of themes, as well as the sensuality of clay and ceramics. “The starting point was the multiple ways of working with clay and earth; a lot of the pieces are joyful and explosive, even though the exhibition also has a political aspect,” says Stéphane Baumet, director of Villa Datris.

The exhibition opens with several Modernist works, from Picasso’s white pitcher with a painted owl’s face (‘Cruchon Hibou’, 1955), to ceramics by Léger, Lucio Fontana and Erik Dietman. The show illustrates the historic links between this region, artists and ceramics – such as Picasso’s passion for working with clay, which developed at the Madoura pottery in Vallauris, near Antibes. This connection is still very alive today, as highlighted through the inclusion of several local practitioners, including Caitriona Platts-Manoury whose ceramic wall made from bright columns of enamelled elements stands in the courtyard. 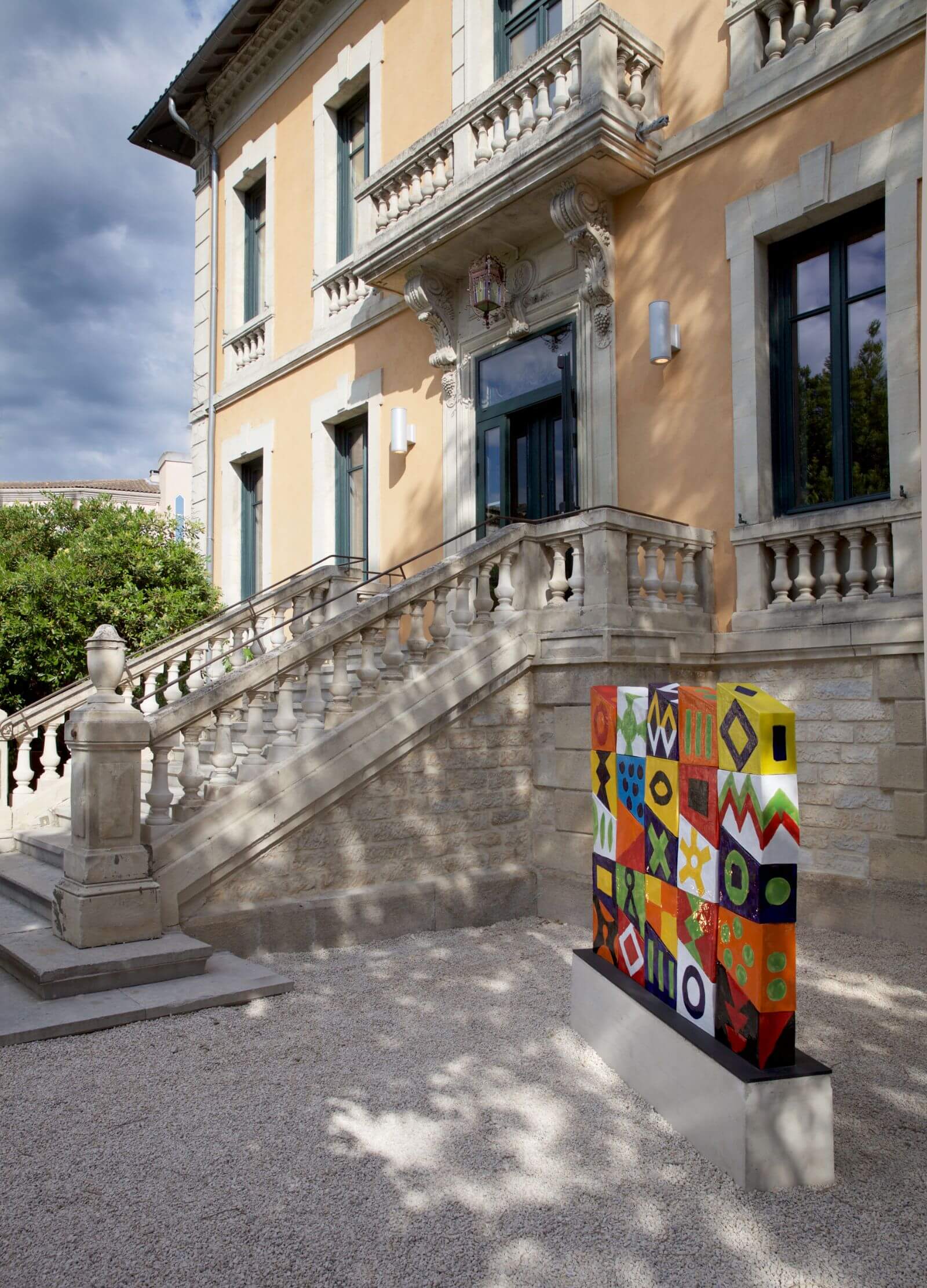 The predominant theme of nature is treated in many different ways. Giuseppe Penone’s ‘Terra su terra – Tronco’ (2015) – a bronze branch embedded with a terracotta fragment bearing the imprint of the artist’s fingertips – addresses the intimate connection between humanity and nature. Meanwhile, Klara Kristalova’s glazed sculpture of a girl with flora emanating from her mouth is a nostalgic reflection on childhood. 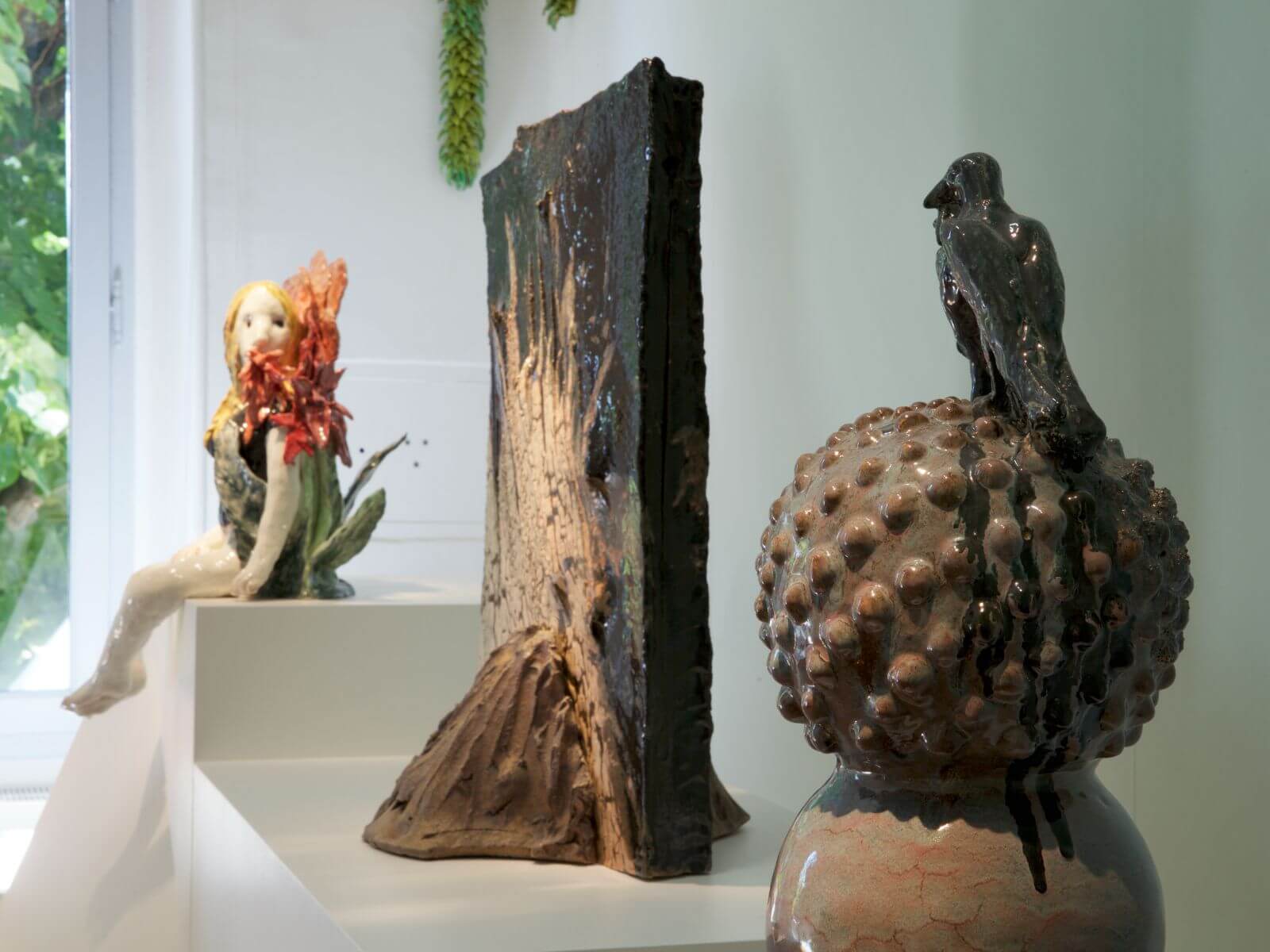 Other works express ecological concern, such as Josèfa Ntjam’s ‘Hybrid Family’ (2019) – a group of composite plants and creatures that is a dystopian vision of ecosystems being impacted by pollution – and Claire Lindner’s ‘The Fall’ (2021),  a mural installation of coral-like shapes becoming increasingly deformed and putrescent. 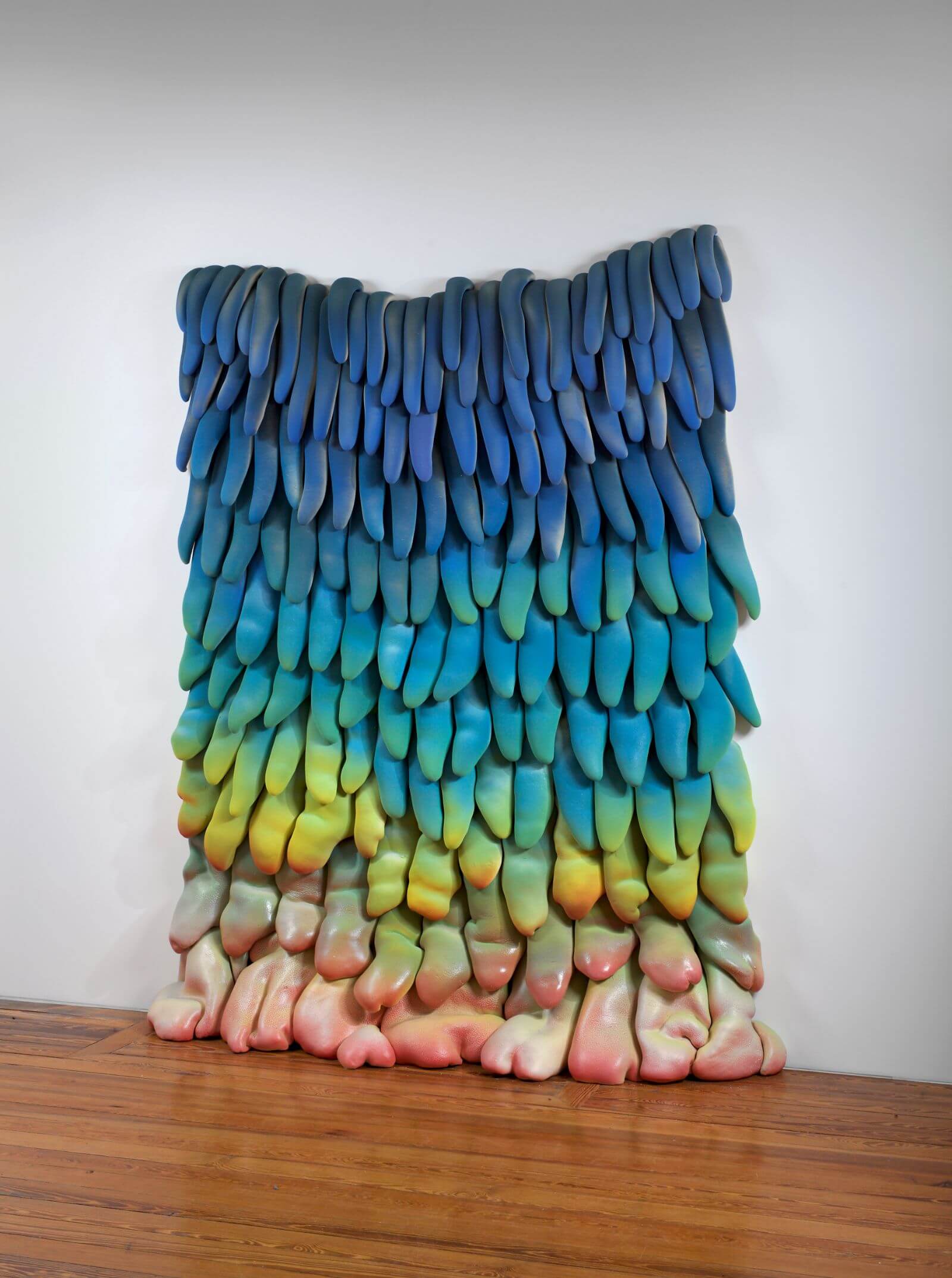 Particularly striking and political are Barthélémy Toguo’s huge vases ‘Vaincre le virus!’ (2016). Depicting blood-red hand prints, patterns of viruses, faces and bodies, the vessels refer to the transmission of viruses and contamination of water. The Cameroonian artist realised them in Jingdezhen, China, which has been producing porcelain for over 2,000 years. 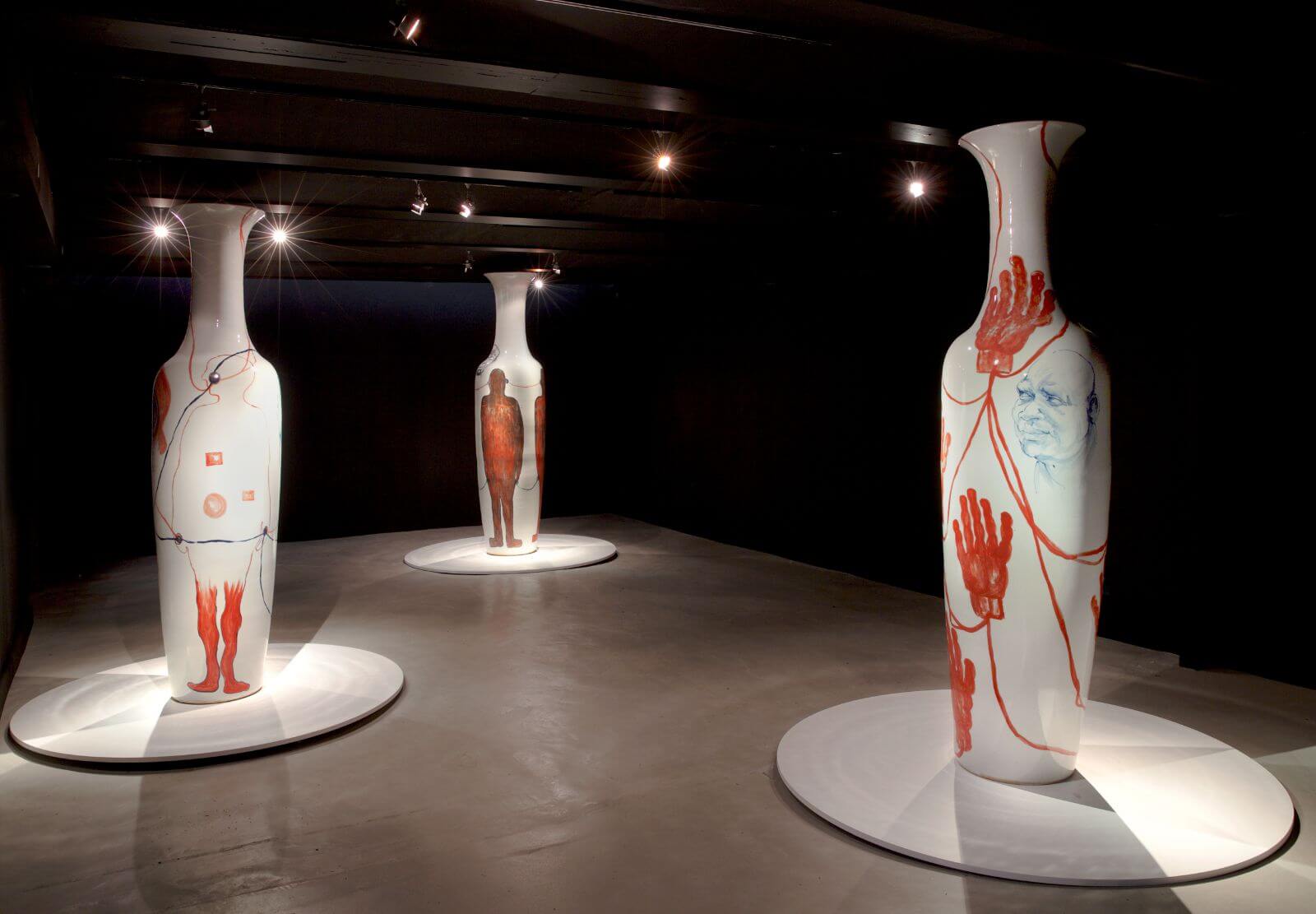 The exhibition demonstrates beautifully the freedom and variety that clay and ceramics offers to artists across different nationalities and different generations. Jacques Kaufmann, for instance, made his monumental sculpture, ‘Buncheong Melon’ (2015), evocative of a dwelling, during a residency in South Korea. The piece is made from hundreds of uneven stoneware discs, each having its own variations. Other highlights include Jean-Charles Pigeau’s miniature temple ‘Akade autel’ (2021), Takuro Kuwata’s exuberant tea bowls and Merete Rasmussen’s celeste wave, ‘Blue Wall Object’ (2008).

‘Against Nature’ at MO.CO. Panacée, Montpellier
The central tenet of this exhibition is how ceramicists are alchemists, transforming natural materials of clay and earth into art. Steering clear of the history of ceramics, the exhibition focuses instead on works by 30 contemporary practitioners who are united by their preoccupation with the concept of metamorphosis. 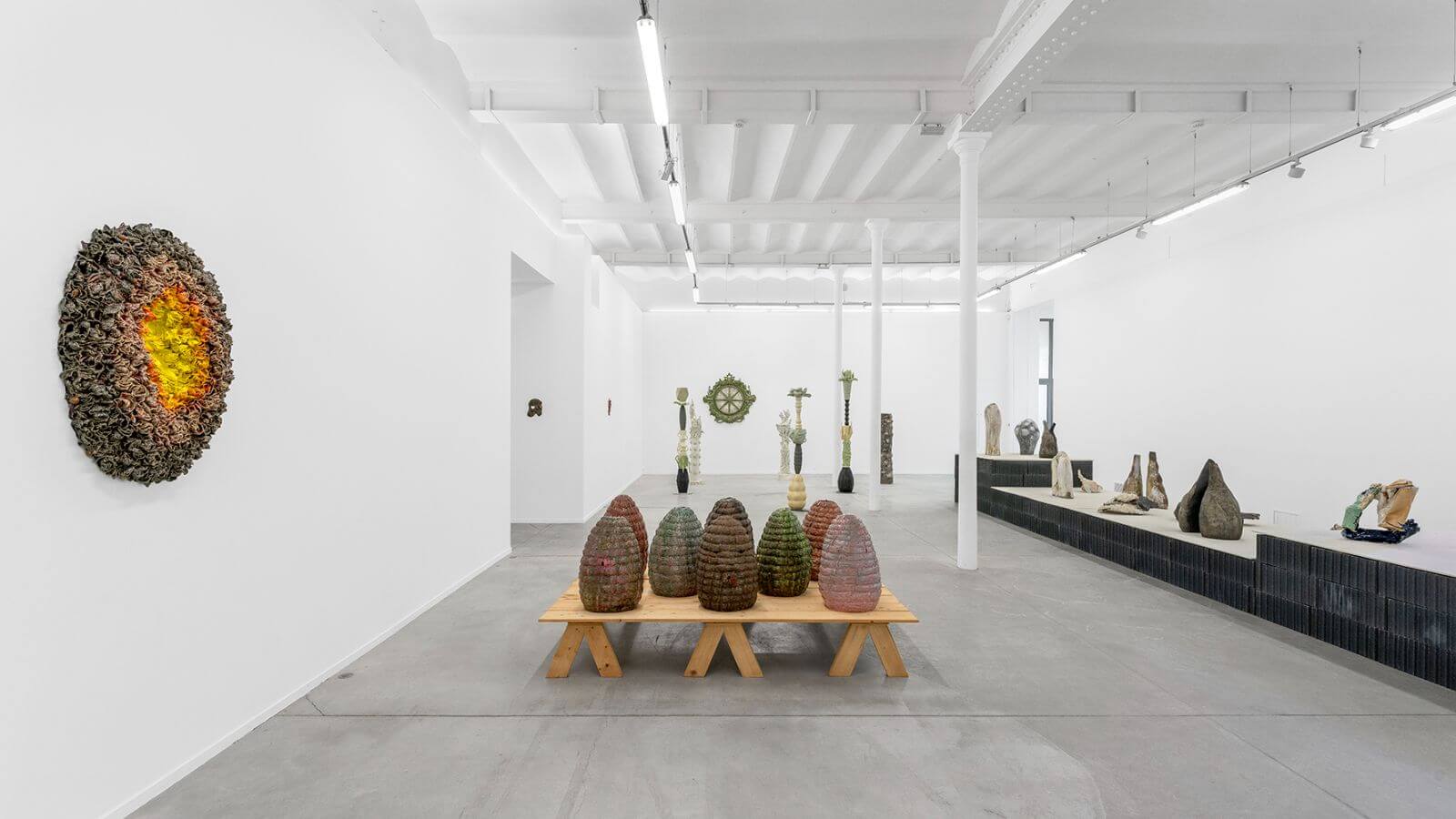 The show is underscored by a fascination with the medium’s capacity for shaping stories by casting, or modelling, or throwing on the potter’s wheel. The works are organised in three sections, in order to explore various kinds of what curator Vincent Honoré terms “climates”. 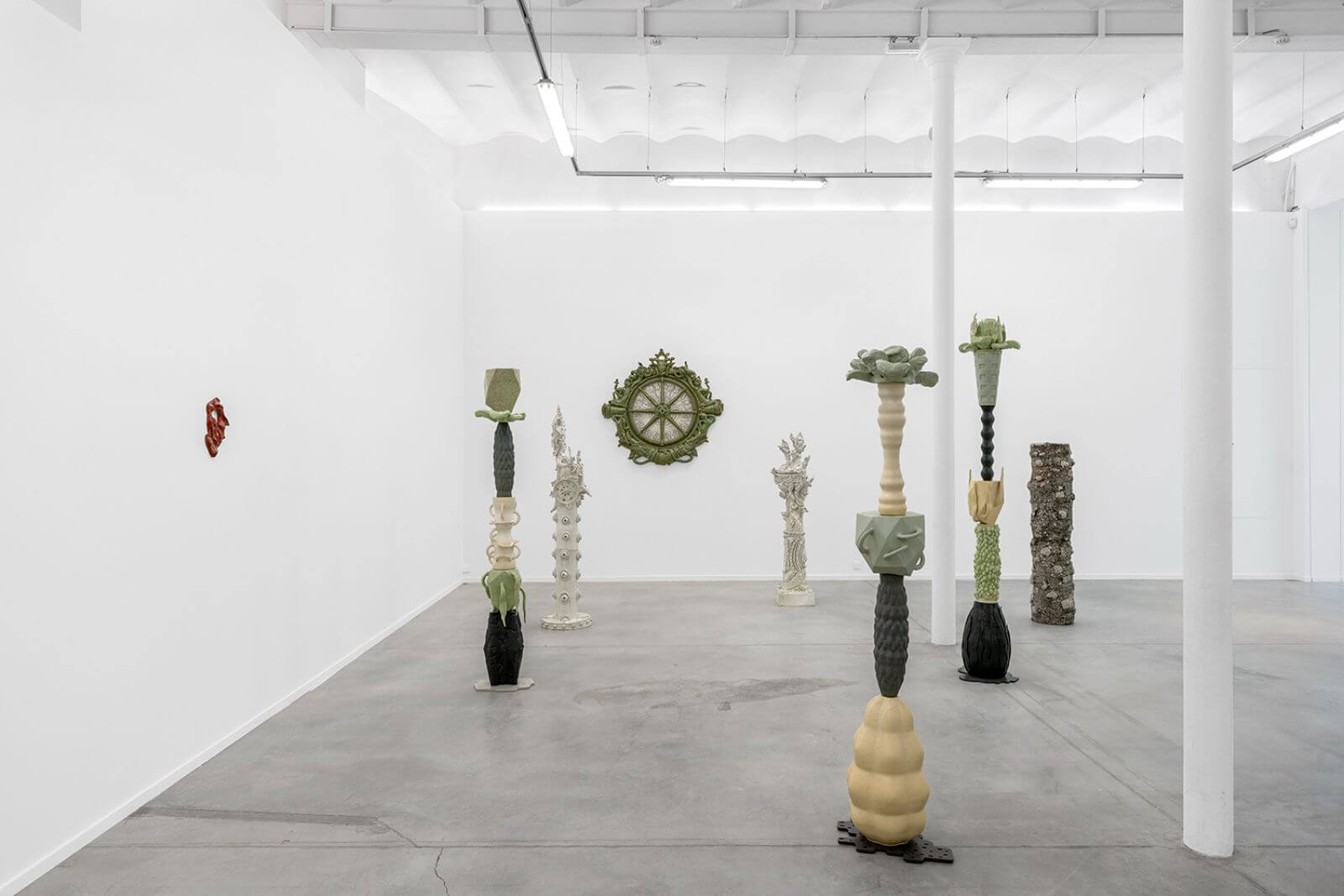 In the first room, a vast display brings together artists whose works collectively conjure a supernatural landscape. Visitors are presented with Marion Verboom’s purplish ceramic tree ‘Apex’ (2021), the intricately patterned leaves dotted with holes adding to its strangeness; Tamara Van San’s ‘I Am the Passenger (2021) – a towering, three-legged, brightly encrusted yellow sculpture – and organic, viscous pieces by Brian Rochefort and Elsa Sahel. 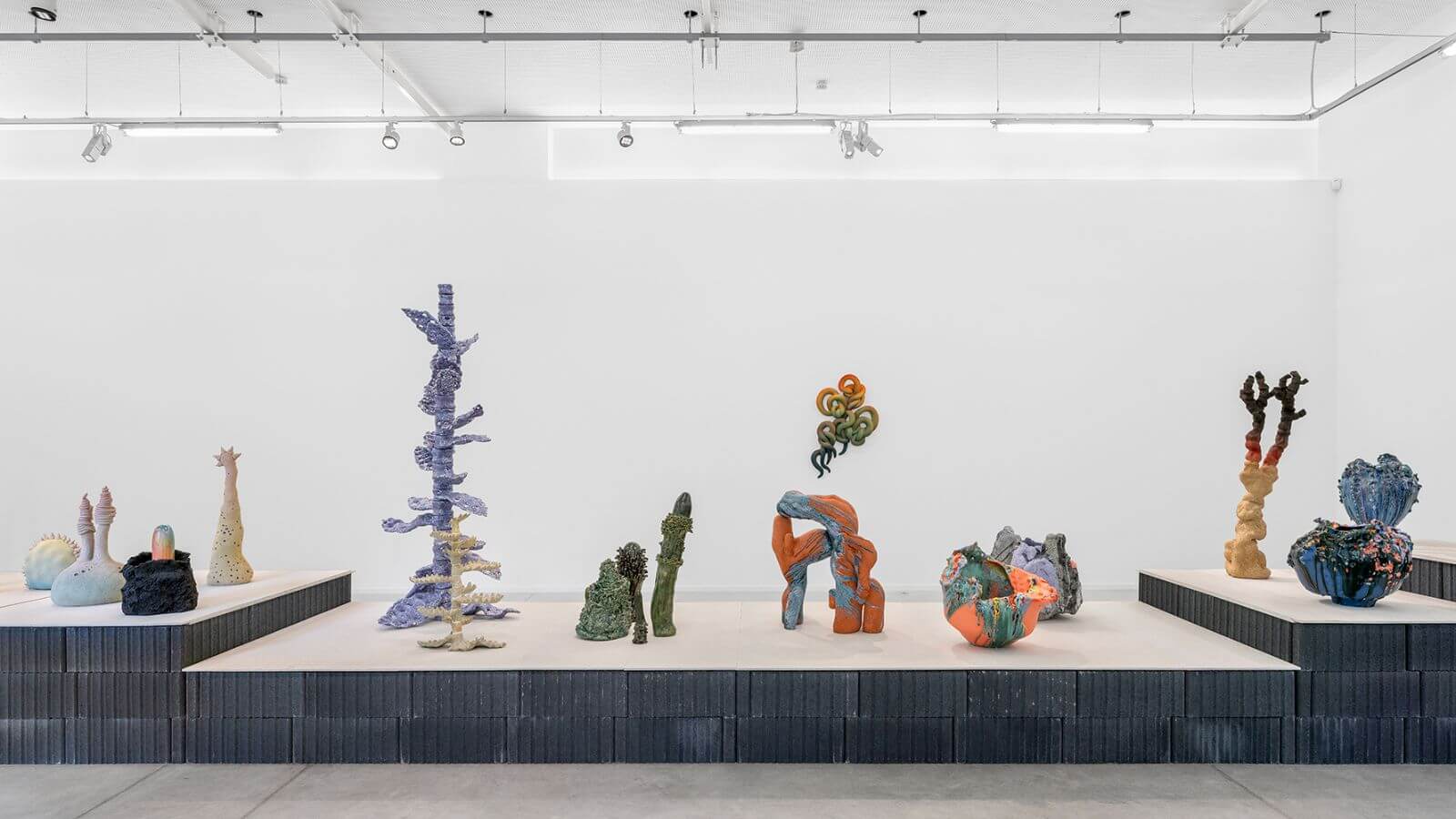 This section of the exhibition segues into Anne Wenzel’s ‘Silent Landscape’ (2006), an extraordinary installation evoking a drowned landscape. Against an enigmatic mural of a forest in Indian ink, blackened trees float in a river, bringing to mind the literary world of J. G. Ballard.

Also memorable is Marlène Mocquet’s installation ‘En plein coeur’ (2016-2017). At the opening of a spooky glade is a large creature that seems to hold an undergrowth inhabited by elephants and birds. In this grotesque scene, trees with monstrous faces are brandishing candles, while apples are hanging from chains and rotting in the soil. 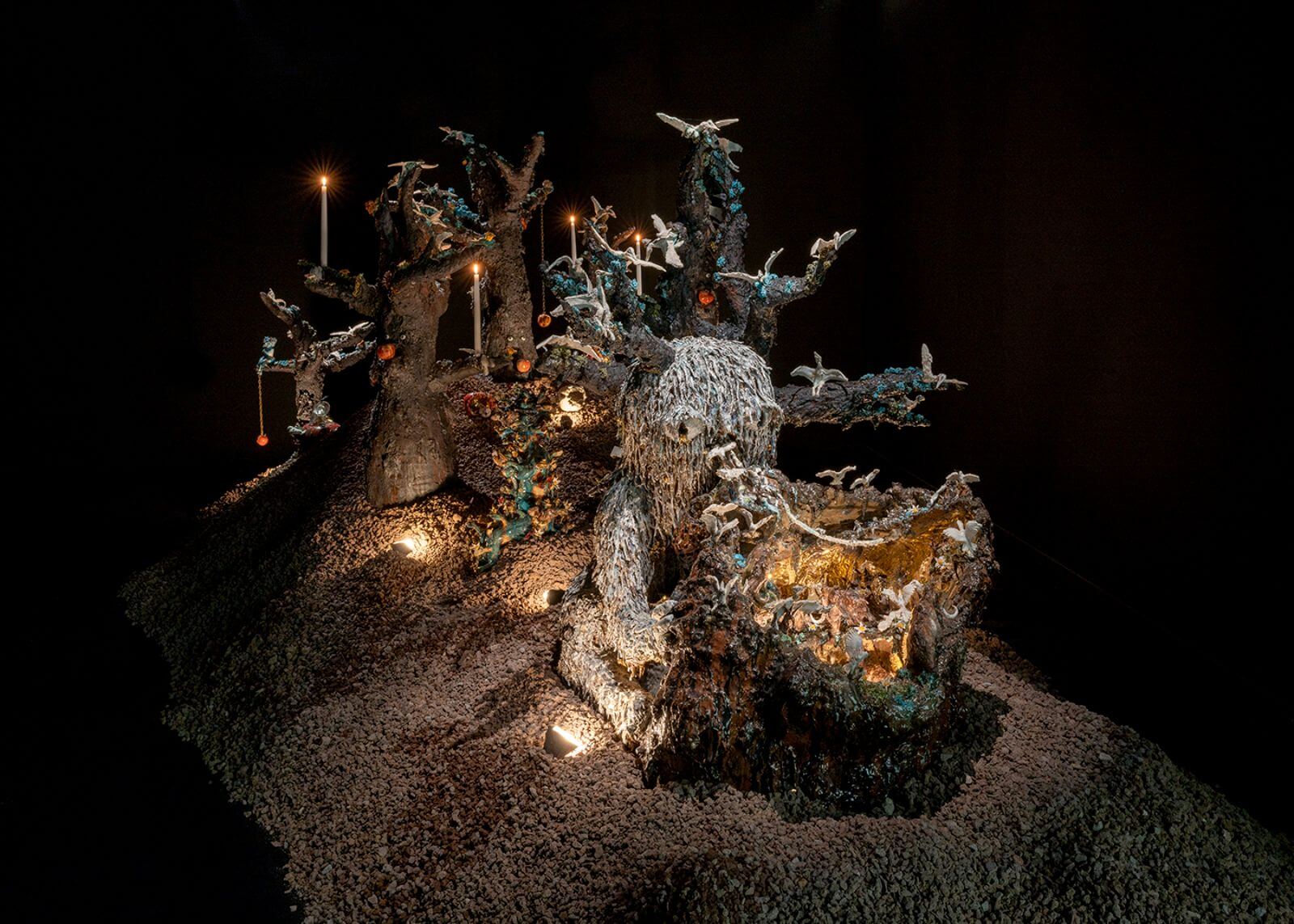 A sense of disquietude permeates much of the show, from Sylvie Auvray’s ensemble of masks to Nitsa Meletopoulos’s installation ‘The Garden of Claws’ (2022), featuring vessels with claw-shaped extremities and moss green tips. Elsewhere, Jessica Boubetra’s hybridised totems fusing organic and human-made references are like peculiar cacti, while Johan Creten’s wall sculpture ‘Brain Drain II’ (2015) is composed of a myriad of petals in a ravaging blaze. 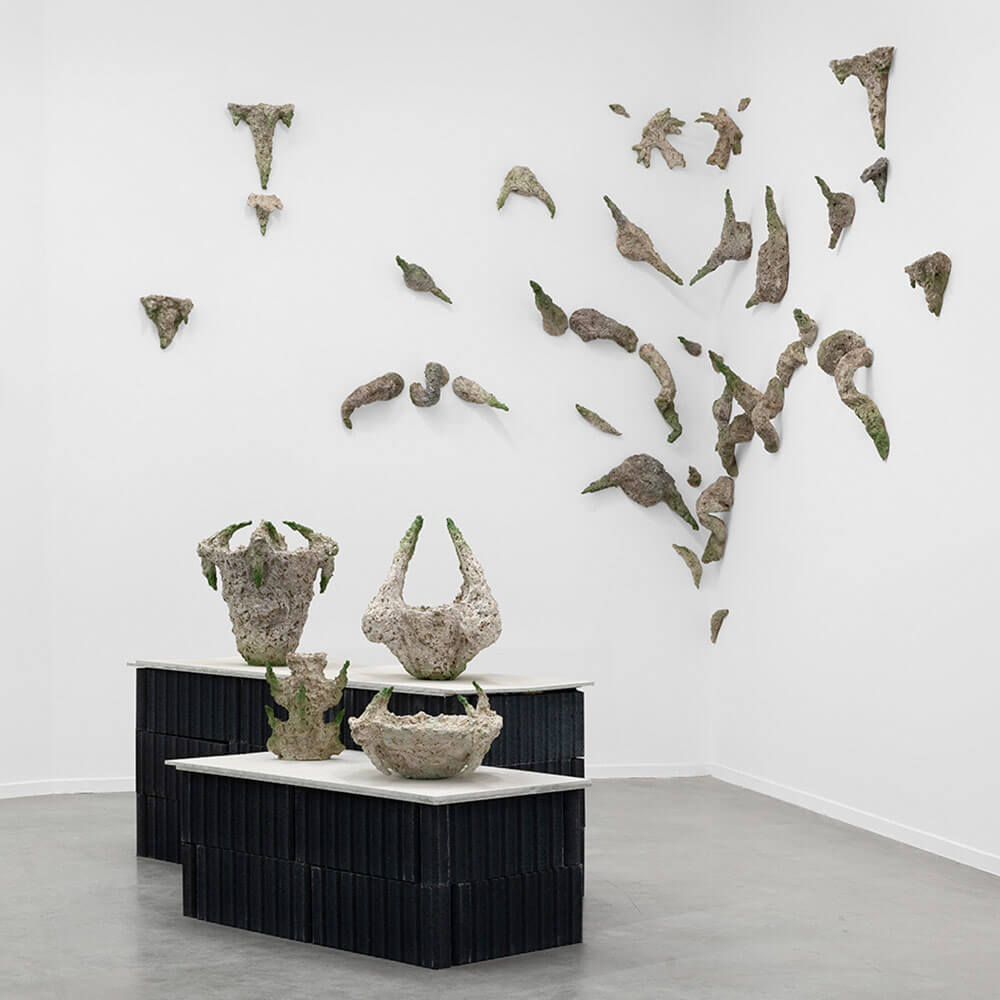 Antoine Pierini: ‘En rêvant la Méditerranée’ at Villa Kérylos, Beaulieu-sur-Mer
“I’ve known the Villa Kérylos for many years and my idea was not to disrupt its harmony but create an exhibition that would integrate perfectly with its serenity,” says artist Antoine Pierini. 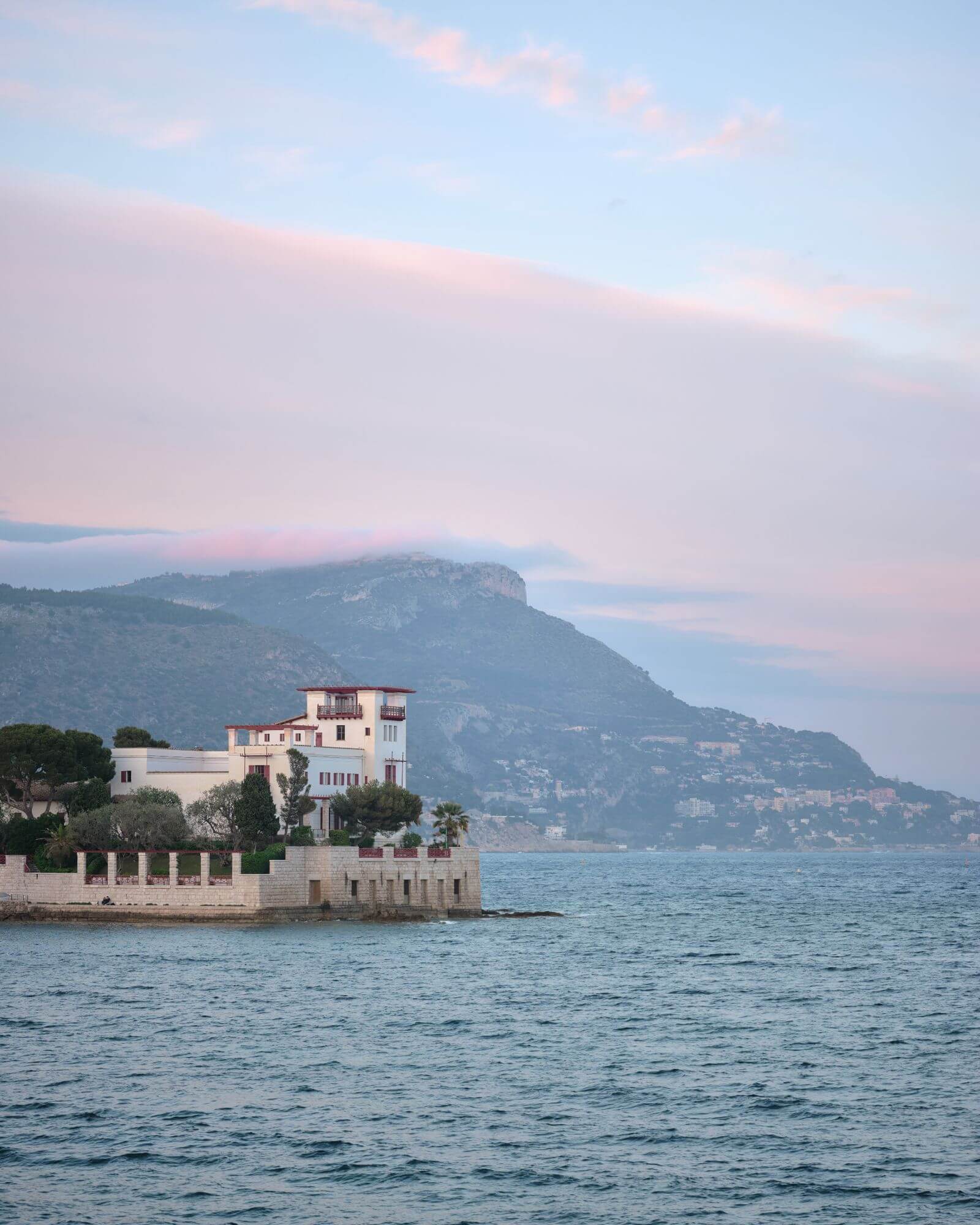 Pierini, 42, was given carte-blanche by the Centre of National Monuments, which manages historical sites in France, for his show at Villa Kérylos. The villa was built in the 1900s by architect Emmanuel Pontremoli for archaeologist Théodore Reinach and was based on the noble houses of ancient Greece. Upon Reinach’s death, he bequeathed the villa to the French state.

Pierini, who comes from a family of glassblowers and sculptors, spent more than three years creating sculptures for the exhibition in his Biot atelier. The pieces represent a creative fusion of fictions about plant life, Greek antiquity, culture and the ocean, adding another layer of reverie to the villa’s rich narrative. 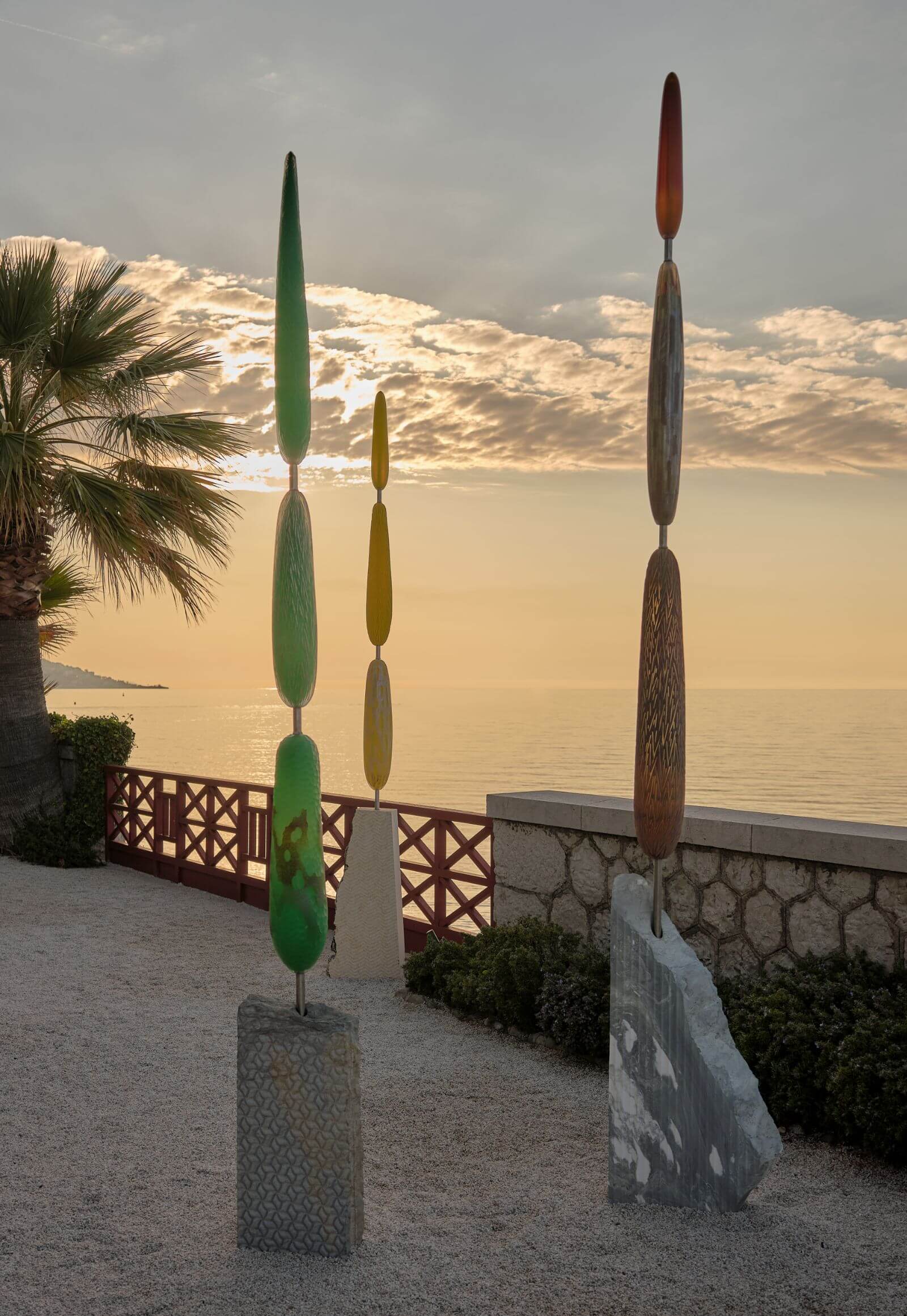 In the garden overlooking the Mediterranean, a trilogy of emerald green, gold and brown citrine ‘Arbres Repères’ gleam in the sun. Formed from pieces of engraved blown glass, they are loosely inspired by cypress trees. Similar pieces are also on view in the marble-walled living room. 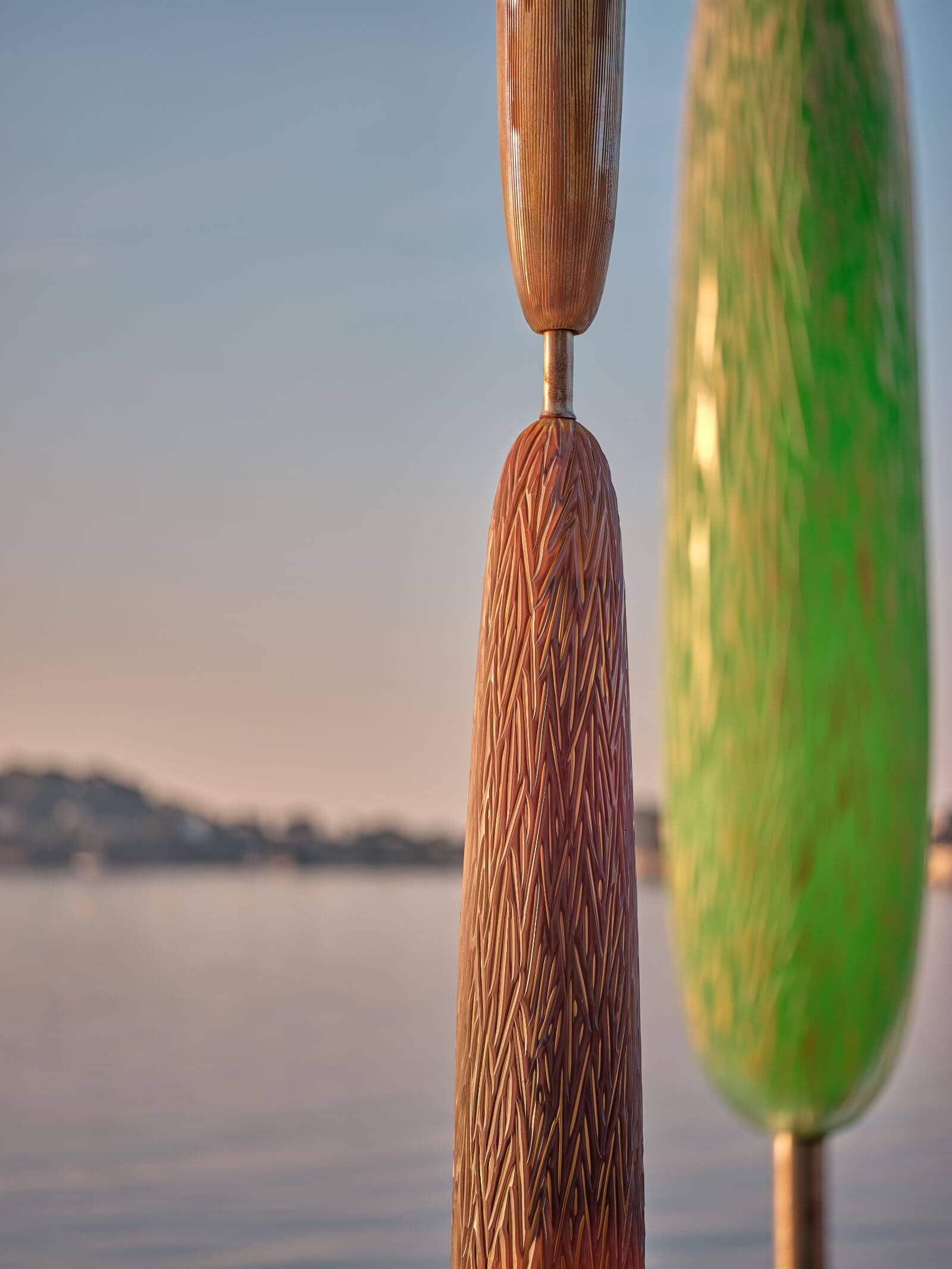 Then in the peristyle, or central courtyard, decorated with frescoes about the Greek gods, a group of lush reed columns, ‘Colonnes Roseaux’, soars into the sky. Pierini drew inspiration from Constantin Brancusi’s ‘Endless Column’ and its repeated modules.

Other works suggest the idea of a voyage. A video of waves roaring and crashing is projected onto the wall behind an installation of translucent vessels based on the two-handled amphora used in ancient Greece as storage jars. In the bedrooms upstairs, meanwhile, larger amphora-like sculptures are pierced with pink and blue neon lights, infusing the works with a dreamy, nocturnal quality. 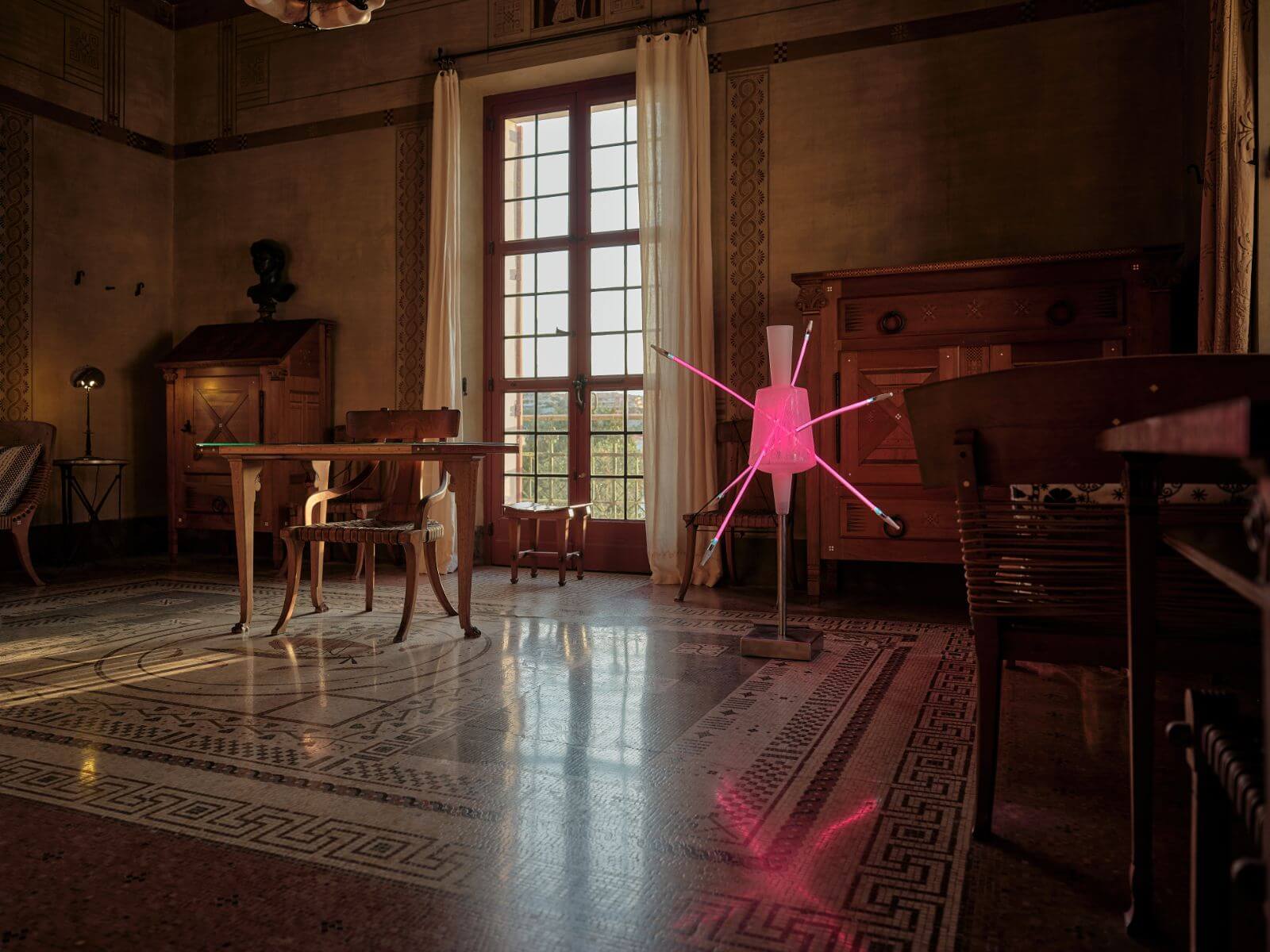 The exhibition continues in the sea-level antiques gallery, where a giant wave-like installation of innumerable shards of glass surges into a corner, fittingly reminding us that the Mediterranean is just beyond the window. 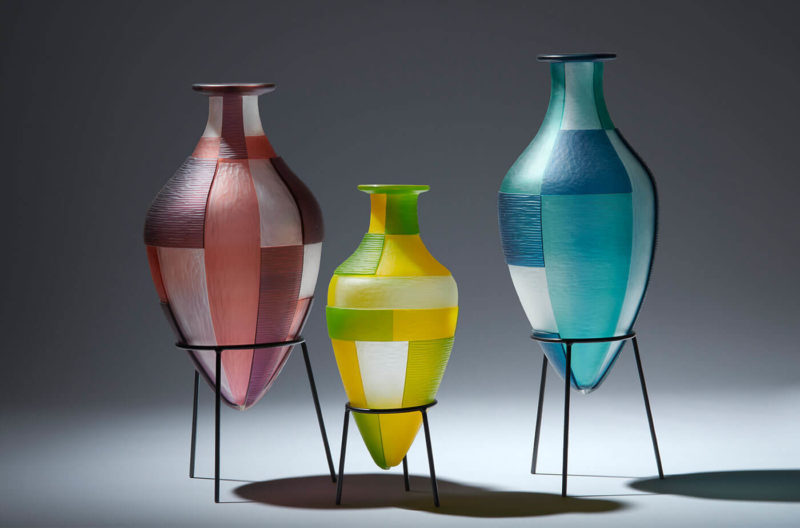 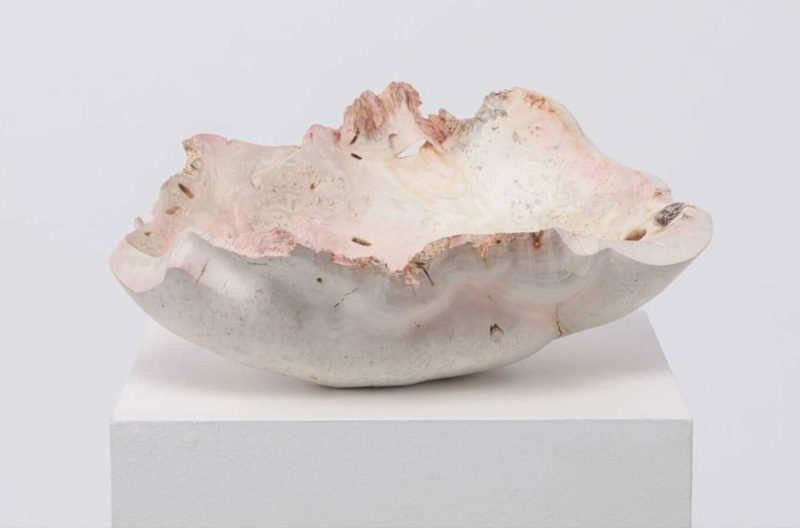 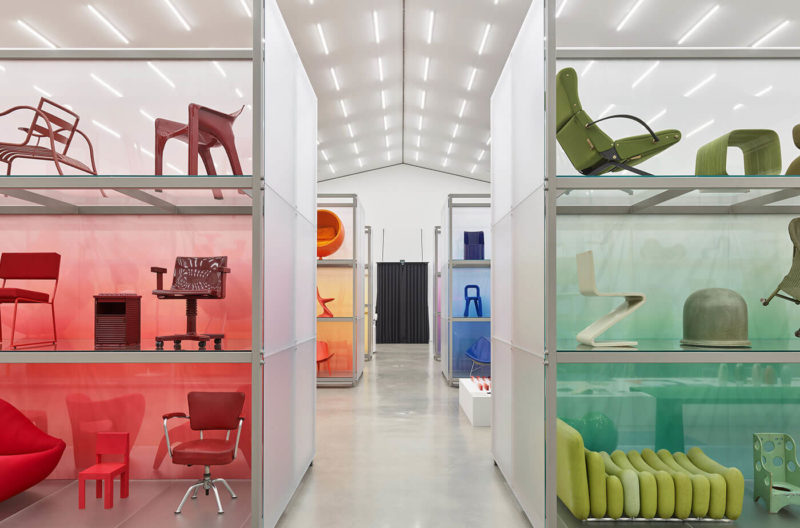 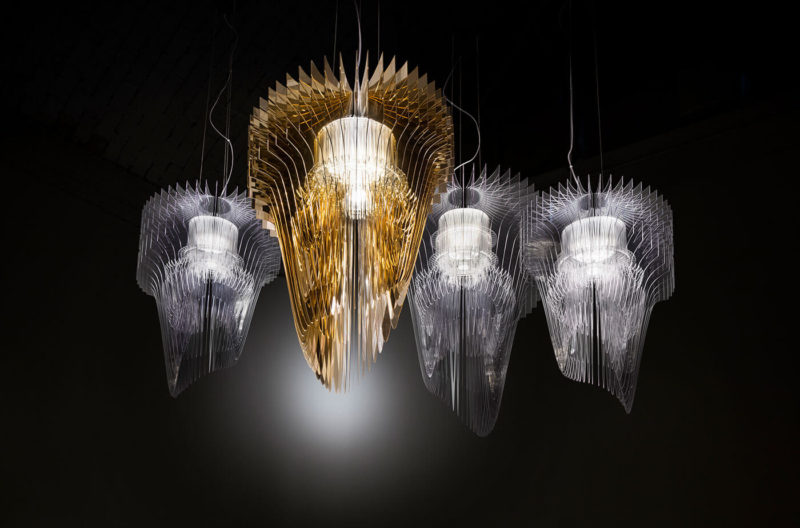