Craftsmanship was exalted at the 23rd edition of the arts and design fair.

THIS SPRING’S PAD revealed the quest of contemporary designers to make works that have unique, personal expression. For instance, Olga Engel’s ‘Miroir Zephyr’, 2018, at Galerie Armel Soyer was a painstakingly made, heart-shaped mirror, its frame adorned with 750, delicately dangling porcelain biscuit beads. An edition of eight (€20,000), it also featured in the young Russian designer’s exhibition that ran concurrently at the gallery. 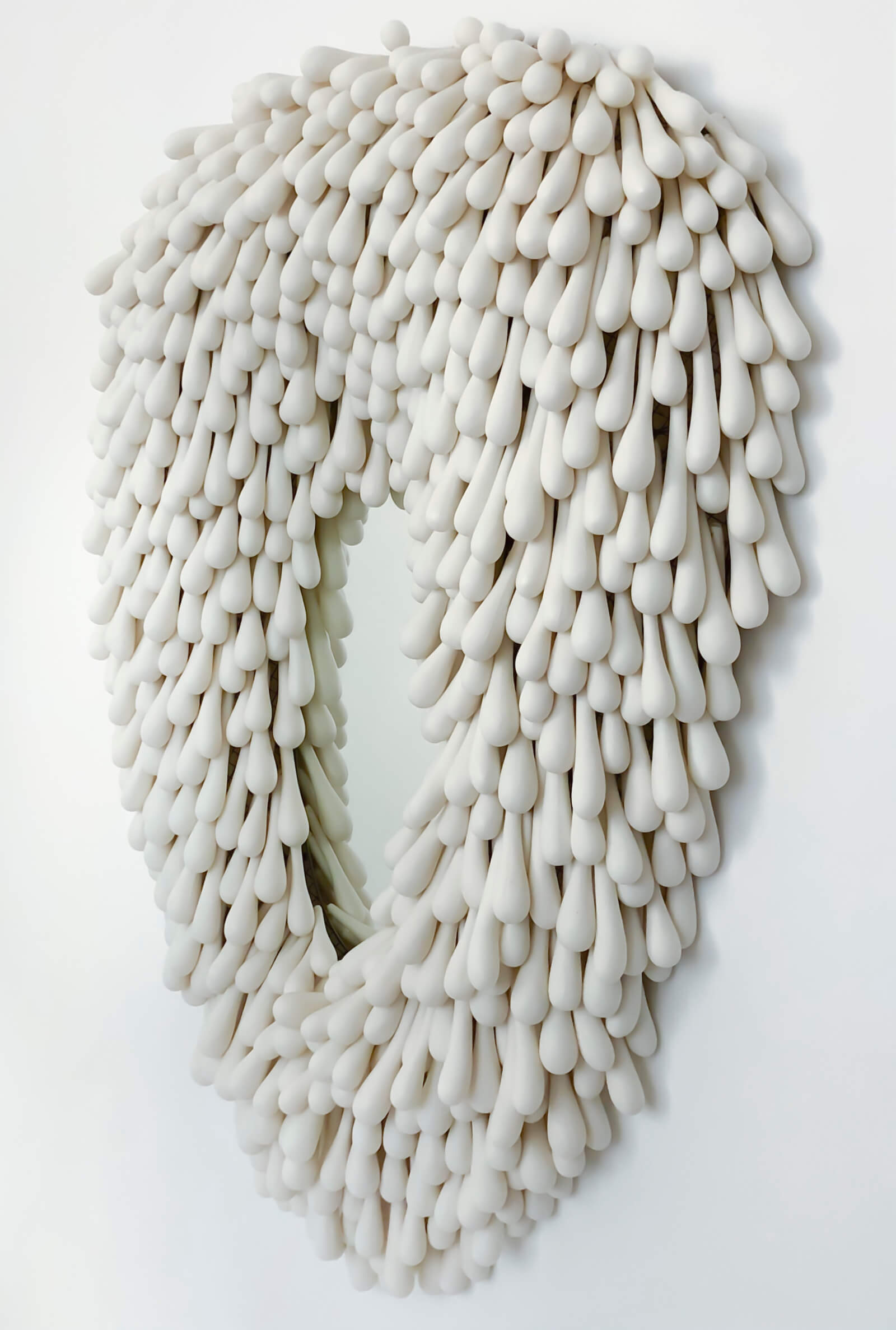 At Mouvements Modernes, alongside tonal, faceted ceramics (€3,500-10,000) by Denmark’s Turi Heisselberg Pedersen, there was the new collection of ceiling and table lamps, ‘Cosme’ (€10,000-18,000), by the French designer Constance Guisset. The lamps featured hand-blown, illuminated pieces of coloured glass strapped to large black cones – a new departure for Guisset, who had a solo show at the Musée des Arts Décoratifs in Paris last year. “This is the first time that she has worked with glass for our gallery, and these are unique pieces made especially for the fair,” said gallery manager Hélène Prunier Ruelloux. 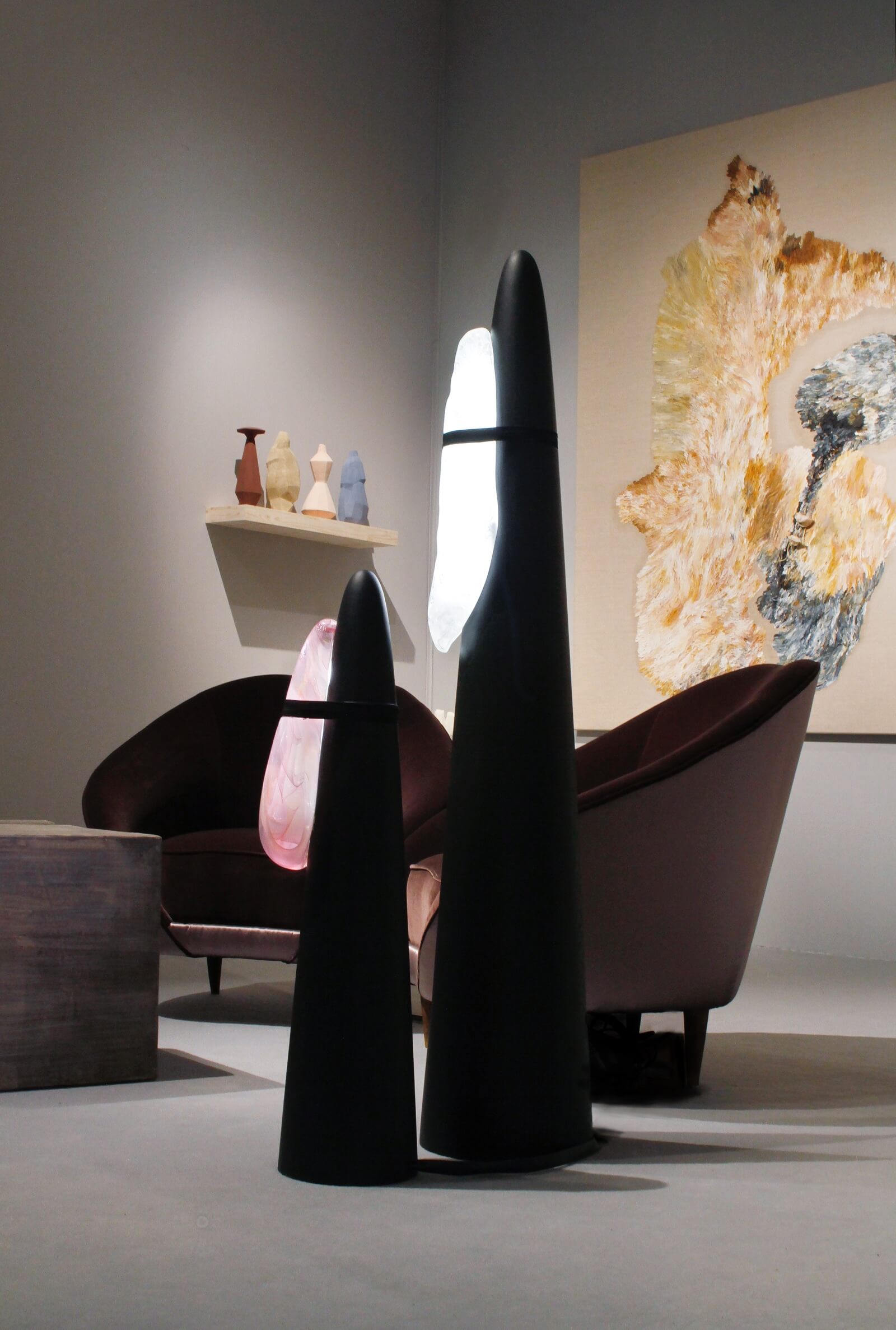 Mayaro, a gallery inaugurated last year to represent artisans, was a first time exhibitor at PAD. Two of their artists, Godefroy de Virieu and Stefania di Petrillo (a couple in their forties), scooped the fair’s Young Creation award with ‘Basket Bar’. Made from woven wicker and rattan clad in red leather piping (€25,000, made to order), it was a desk conceived in the spirit of a hot air balloon that has drink compartments on both sides of its oak interior, thus serving a double function. “In the utopian and visionary image of the French 19th-century writer Jules Verne, the ‘Basket Bar’ has landed at Mayaro’s stand and is dedicated to all the dreamy explorers of post-modern times,” said di Petrillo. 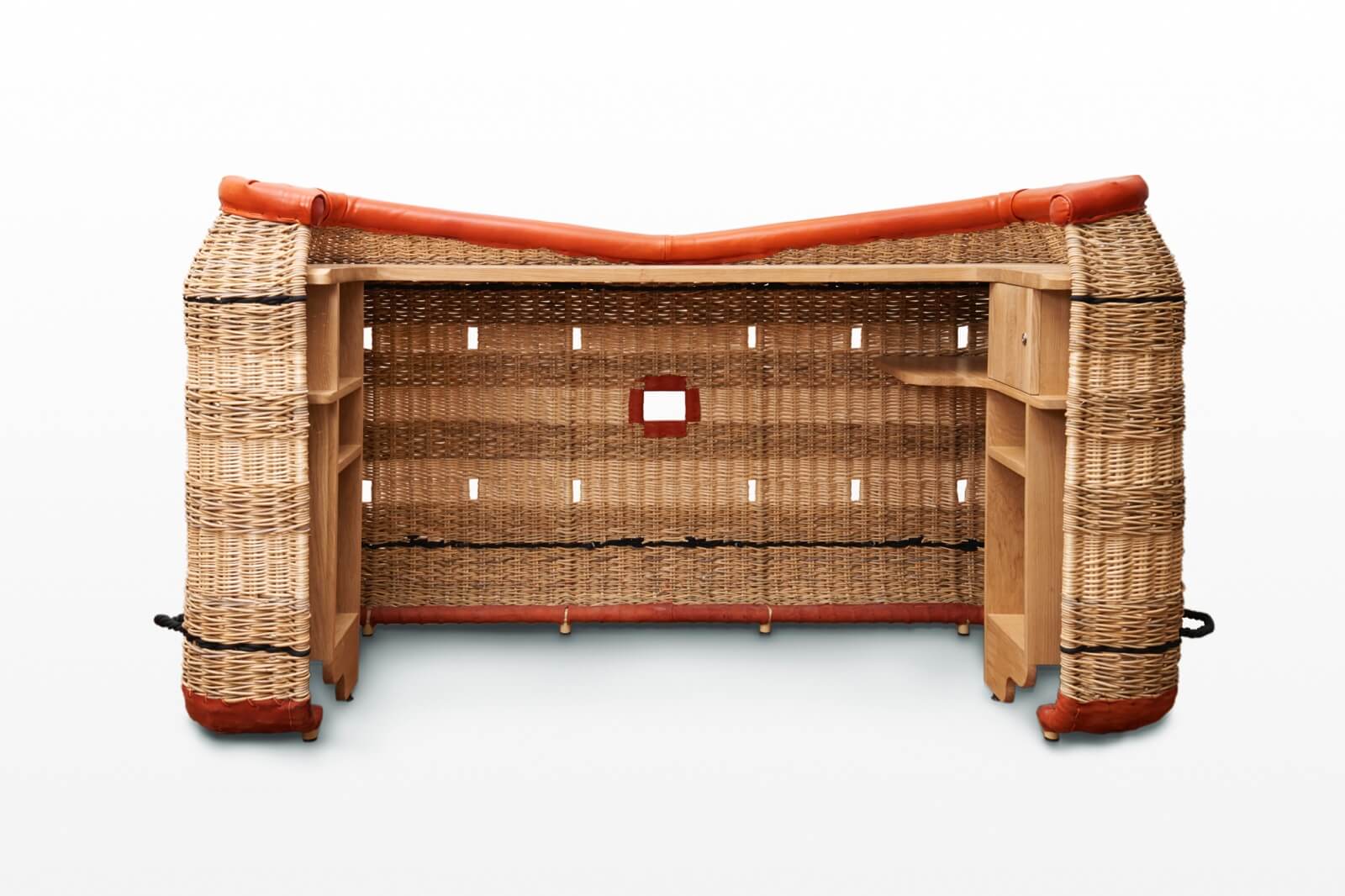 Meanwhile, Guy Bareff’s pair of geometric, white terracotta wall lights from 2018, presented on Galerie Desprez Breheret’s stand, was awarded the Contemporary Design prize. “This artist was already making lights in the 1970s and re-started his production five years ago for us,” says Benjamin Desprez about Bareff’s wall lights (edition of 10 pairs, €6,000 per pair). 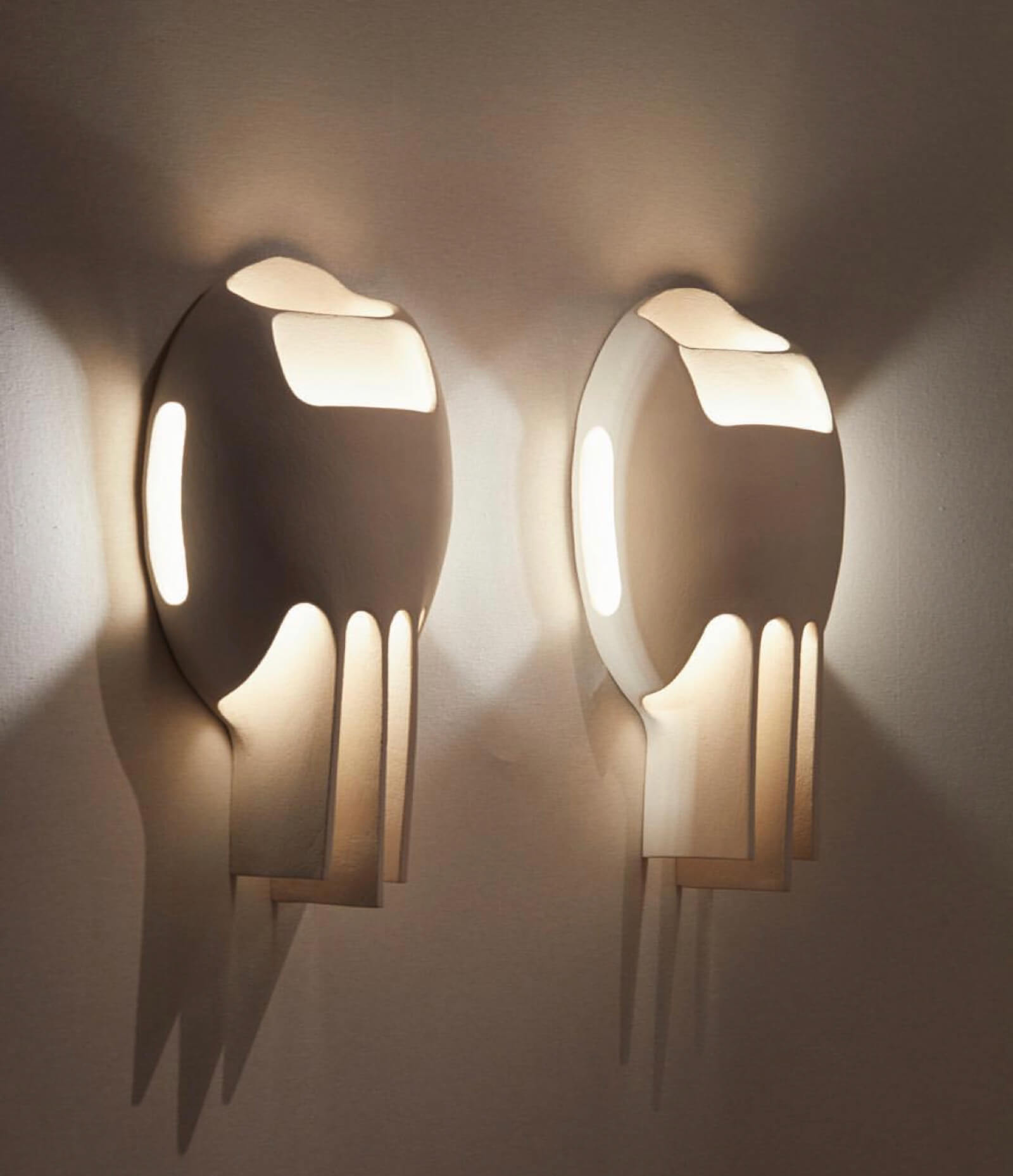 French savoir-faire was also on display at the nomadic gallery Maison Parisienne, established in 2008 by Florence Guillier-Bernard. The gallery was exhibiting sculptural wood furniture (€9,000-25,000) by Pierre Renart, a 29-year-old cabinet maker. Among the work was the ‘Möbius’ console table from 2014, which was sculpted in a loop from a single, wavy ribbon of rosewood.

Another example of exquisite craftsmanship, yet in a completely different style, was German artist Matthias Contzen’s ‘Planet 108’, 2018, at Galerie Dutko. Inspired by the number 108’s significance in Buddhism and Hinduism, the spherical sculpture, hand-carved in white Portuguese marble, measured 108 cm in diameter, was realised in 108 consecutive days and comprised of 108 varyingly sized perforations. 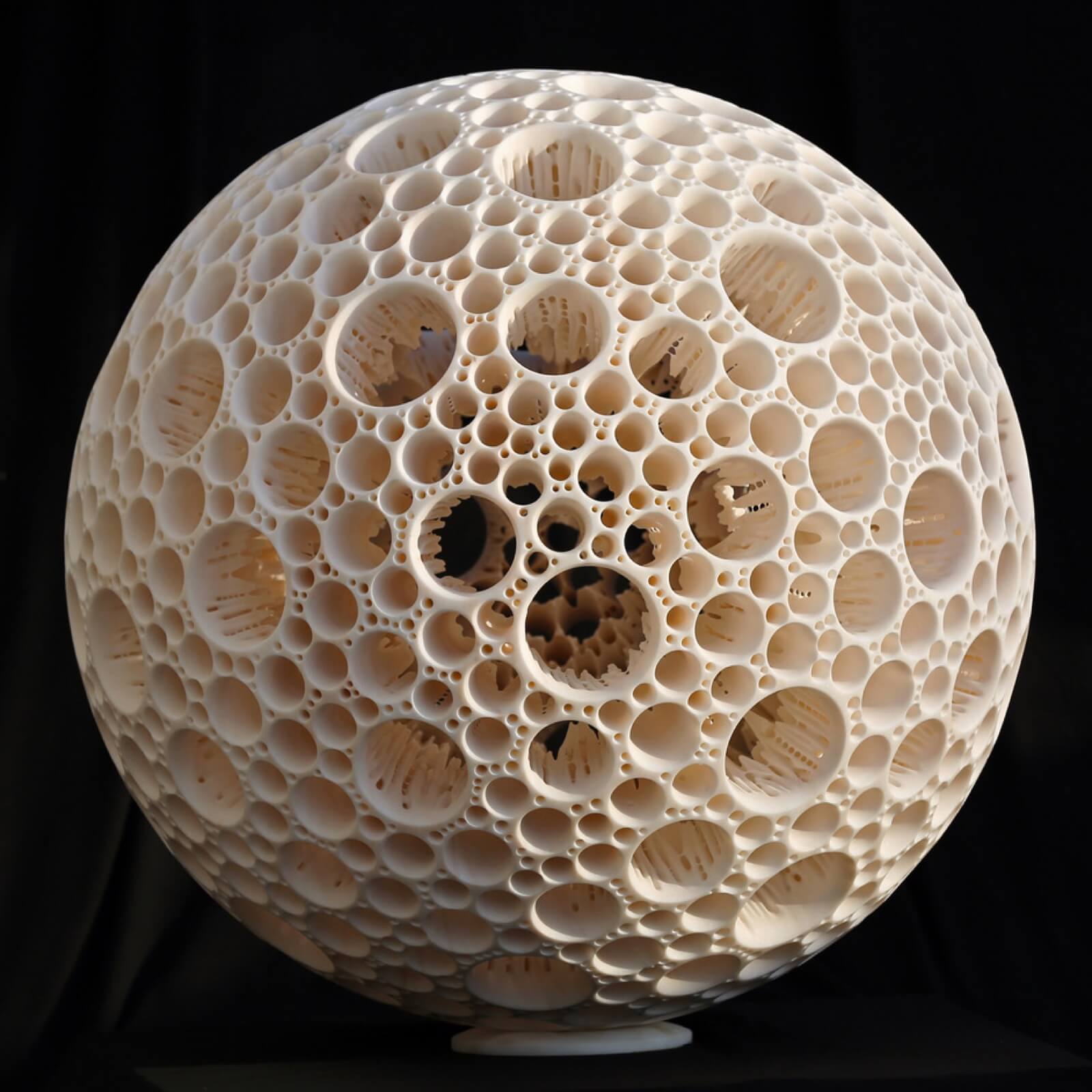 Nacho Carbonell has long explored organic shapes in his wavy, meshed and asymmetrical works, the latest iterations of which were on view at Carpenters Workshop Gallery’s stand. Trees, plants, canopies of leaves and the changing colours of the seasons were all conveyed in the Spanish designer’s solo presentation of light-sculptures on earthy, concrete bases. “With most of my work, what I’m trying to create is an atmosphere more than an object,” says Carbonell. “I love this idea of being under a tree, belonging to something where you’re almost sheltered.” He has recently employed a breadth of new materials, from bronze to beer bottles. For instance, for ‘Broken Mixed Glass Bonzai’, 2019, pieces of used, hammered beer bottles were welded with metal and papier mâché branches and wires, while leftover glass fragments were added to the base. “The colours of the reflections and shadows, and how the light goes through the glass to create optical illusions, bring a special mood into the interior, like stained glass windows in a church,” Carbonell says. 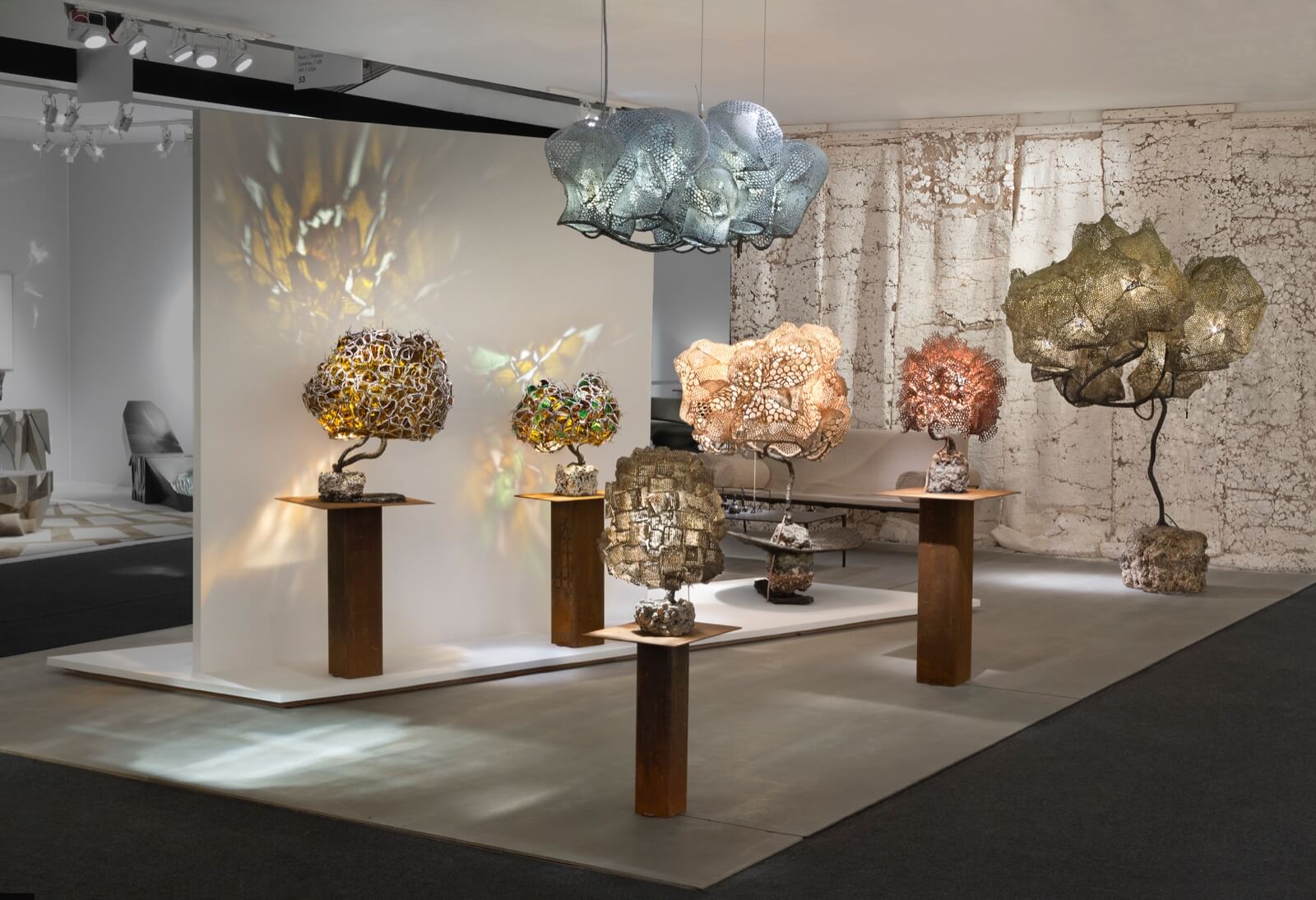 THIS YEAR’S PAD was defined by the quality yet eclectic mix of its 70 exhibitors – from Chinese antiquities at Christian Deydier and historical tribal art at Flak, through to decorative arts at Alain Marcelpoil (which won the Best Stand), contemporary glass works at Clara Scremini and contemporary Scandinavian design at Maria Wettergren. Its founder, antiques dealer Patrick Perrin, originally launched the fair for antique and art dealers on Paris’ left bank. As collectible design became more popular, the name was changed and the focus shifted. Today, besides Paris and London’s Berkeley Square during Frieze, smaller versions of PAD take place in Geneva and Monaco in collaboration with the contemporary art fairs artgenève and artmonte-carlo.

“PAD is the only design fair in Paris and its location is extraordinary – all our clients have come,” says Didier Krzentowski, owner of Galerie Kreo. The gallery’s sales included a vase by Spanish designer Jaime Hayon, lighting by Gino Sarfatti from the 1950s/1960s and paintings by Ronan Bouroullec, who, together with his brother Erwan, has designed six new fountains for the Champs-Elysées.