The Design Edit asks the industrial designer why he's choosing to mint his designs on the blockchain.

Non-fungible tokens (or NFTs) have been around, in one form or another, since the mid-2010s. Recently, however, they have become the subject of intense examination after Christie’s sold Beeple’s project, ‘Everydays: The First 5000 Days’ as an NFT for over $69 million (USD) in March 2021. This event marked a double first in the industry: Christie’s being the first major auction house to offer a digital artwork as an NFT, as well as the first to accept cryptocurrency as part of the payment for the lot.

NFTs and blockchain technology have already proven they have the potential to cause momentous shifts in the art market, but how will these technologies affect the world of design? To find out more, The Design Edit spoke to Nicholas Baker, a designer who is already selling his digital sketches and VR designs on the blockchain.

The Design Edit (TDE): What is an NFT?
Nicholas Baker (NB): An NFT essentially allows you to create a digital asset that has provenance, it allows you to own a digital thing, just like you would an original physical sketch.

TDE: Could you tell us a little bit about your #NicksChairSketches project?
NB: It was a project I started a couple of years ago. I’m always experimenting with the latest technology and the tech of the time was social media. I was sketching and making things, then posting them online. I had been posting all kinds of stuff, but the chair sketches became this weekly exercise, I posted one chair sketch every week and people loved them. 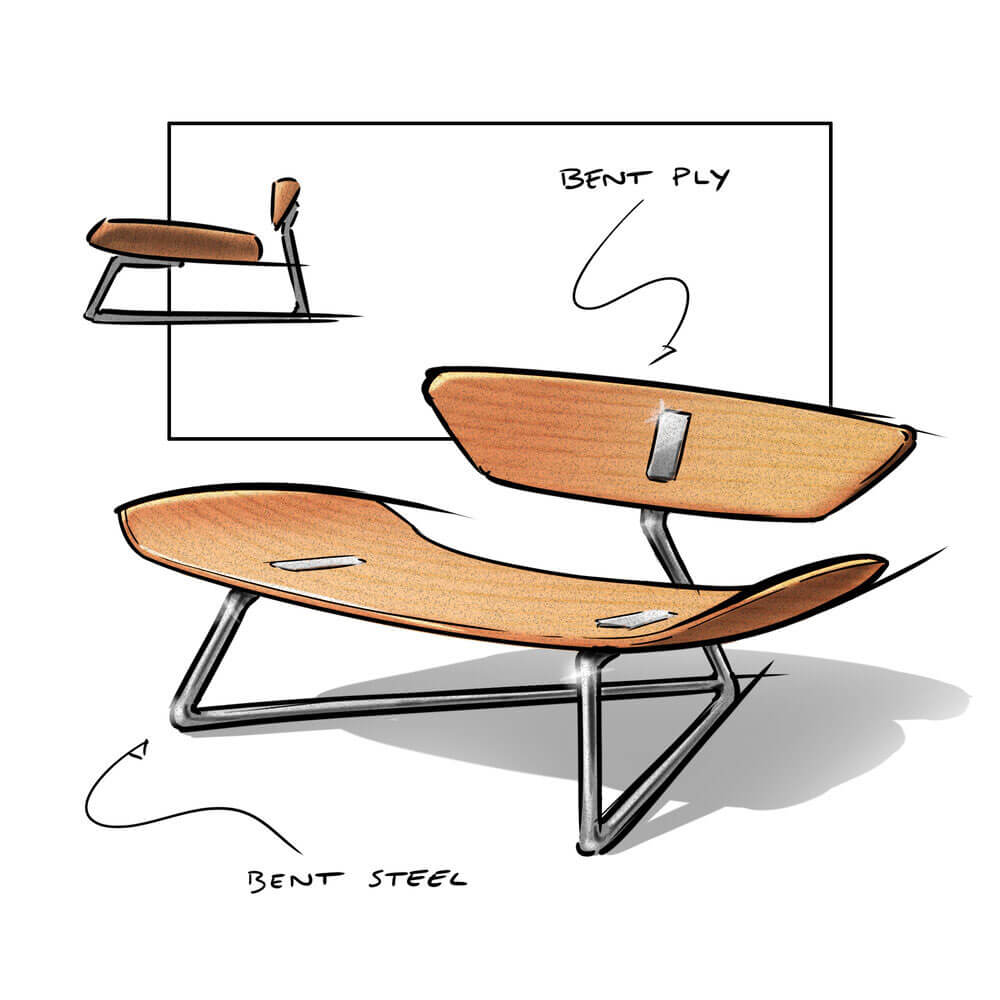 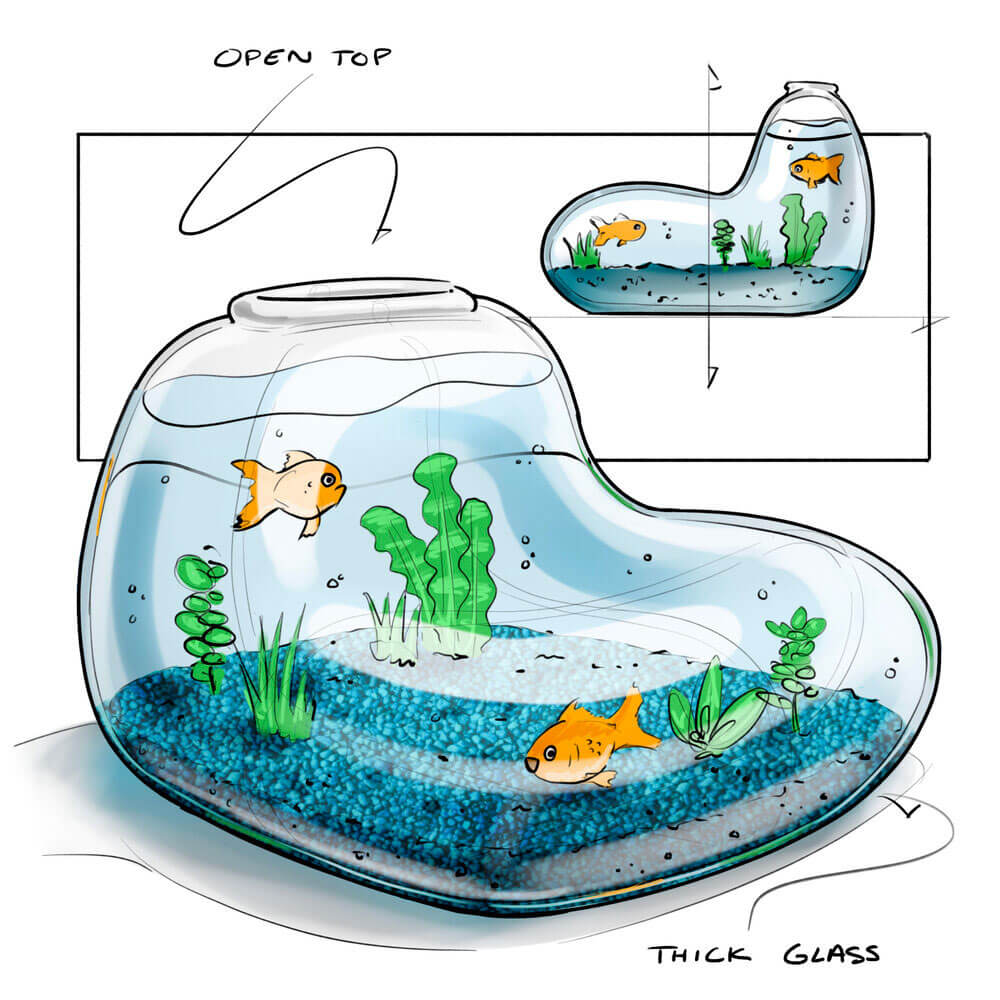 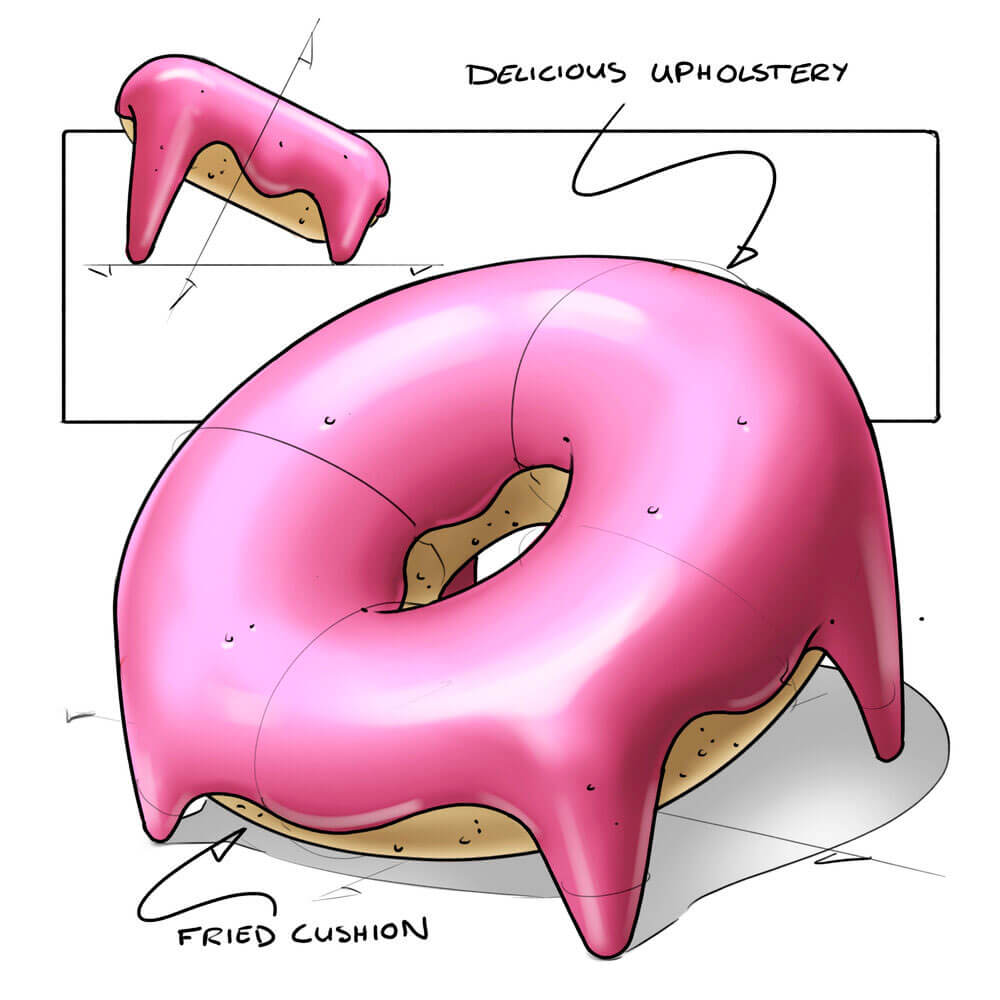 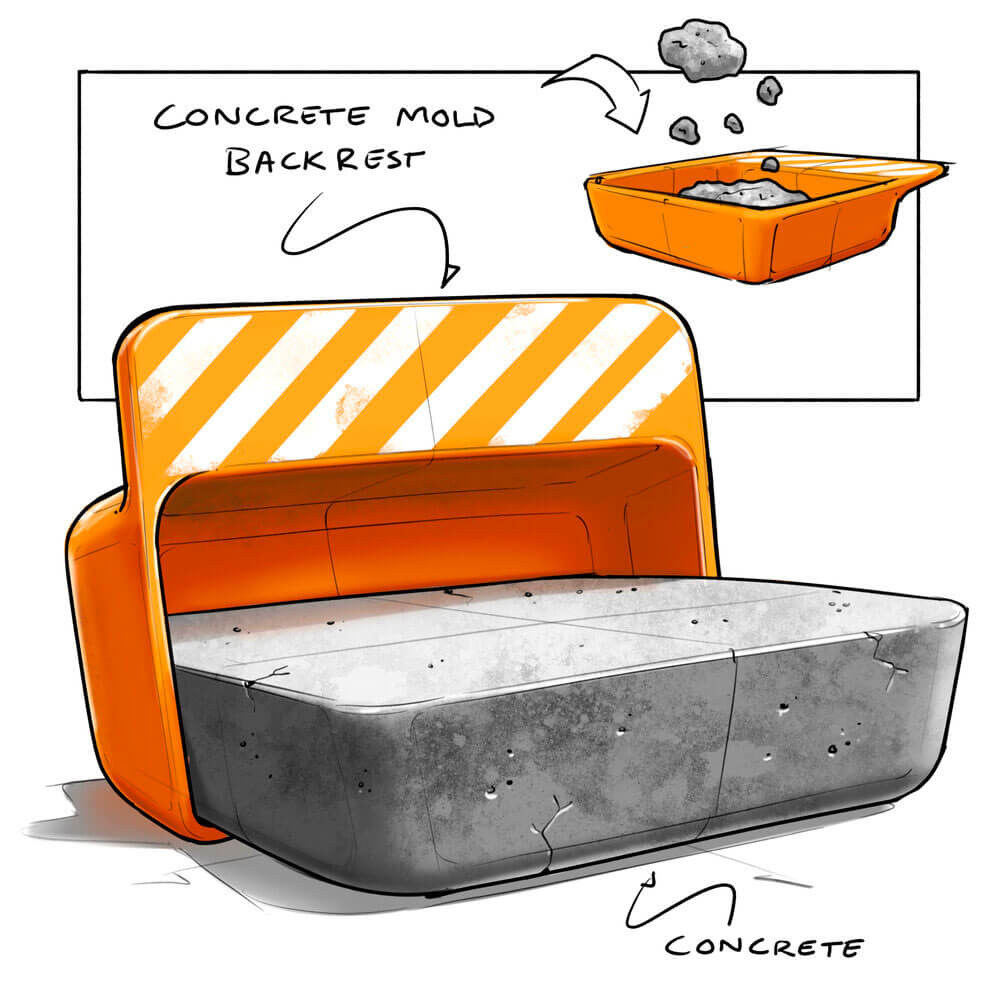 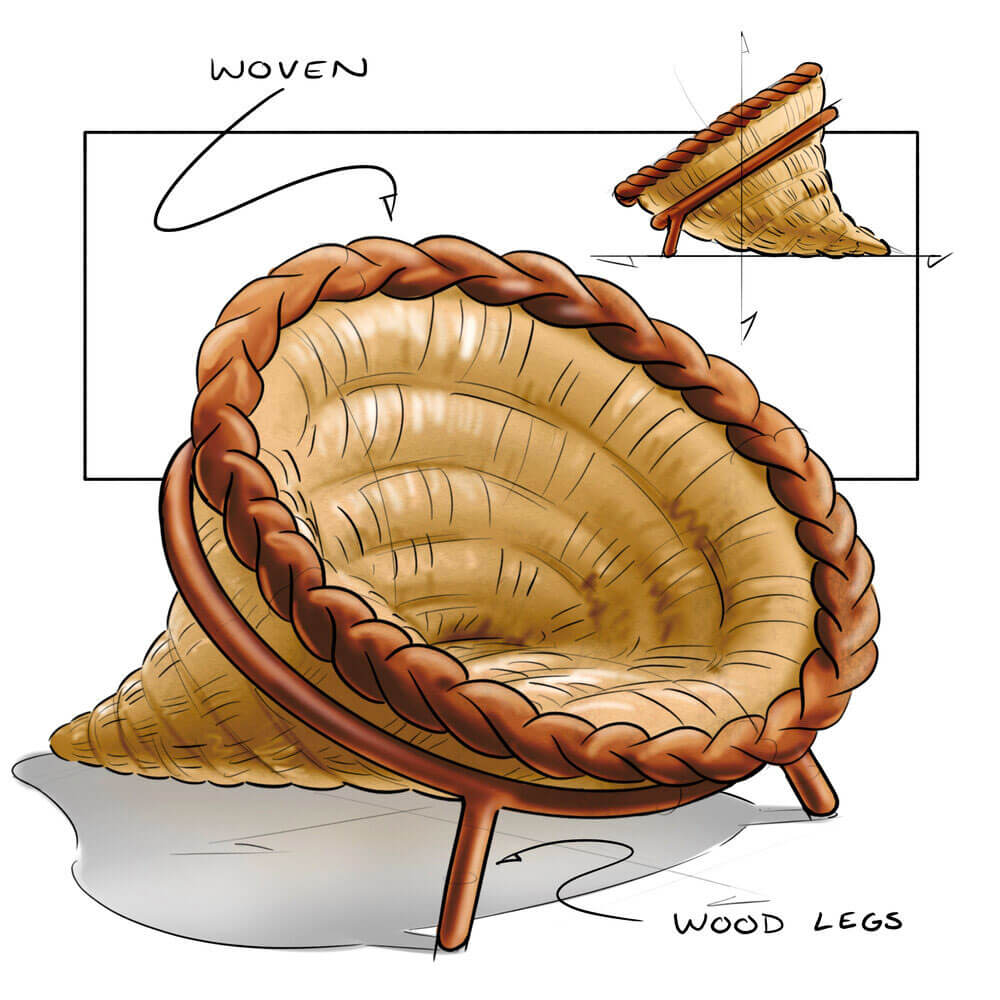 What I found fun with the chair sketches was that as they grew and gained more attention, it became a personal challenge of how to top the last sketch. I was always trying to come up with an even better chair idea, an even crazier sketch. Over the course of two years, I posted one chair each week and ended it at 100 chair sketches.

When I got interested in NFTs late last year, the chair sketches seemed like the perfect project to mint on the blockchain. They were each unique, but had an overall distinctive style. They each have different materials and therefore rarities. There’s a limited number of them. Some of them even have great stories that go along with the sketch. All of these things make for a great collectible NFT.

TDE: Do you think that NFTs will expand the realm of collectible design?
NB: Yes, I think we’ll not only see more digital work being collected but also the digital and the physical tied together in various ways using the blockchain. In addition, I think that the crypto community will become a whole new set of collectors. A lot of these people are going to be introduced to the world of collectible design through the designers that bridge both of these worlds. 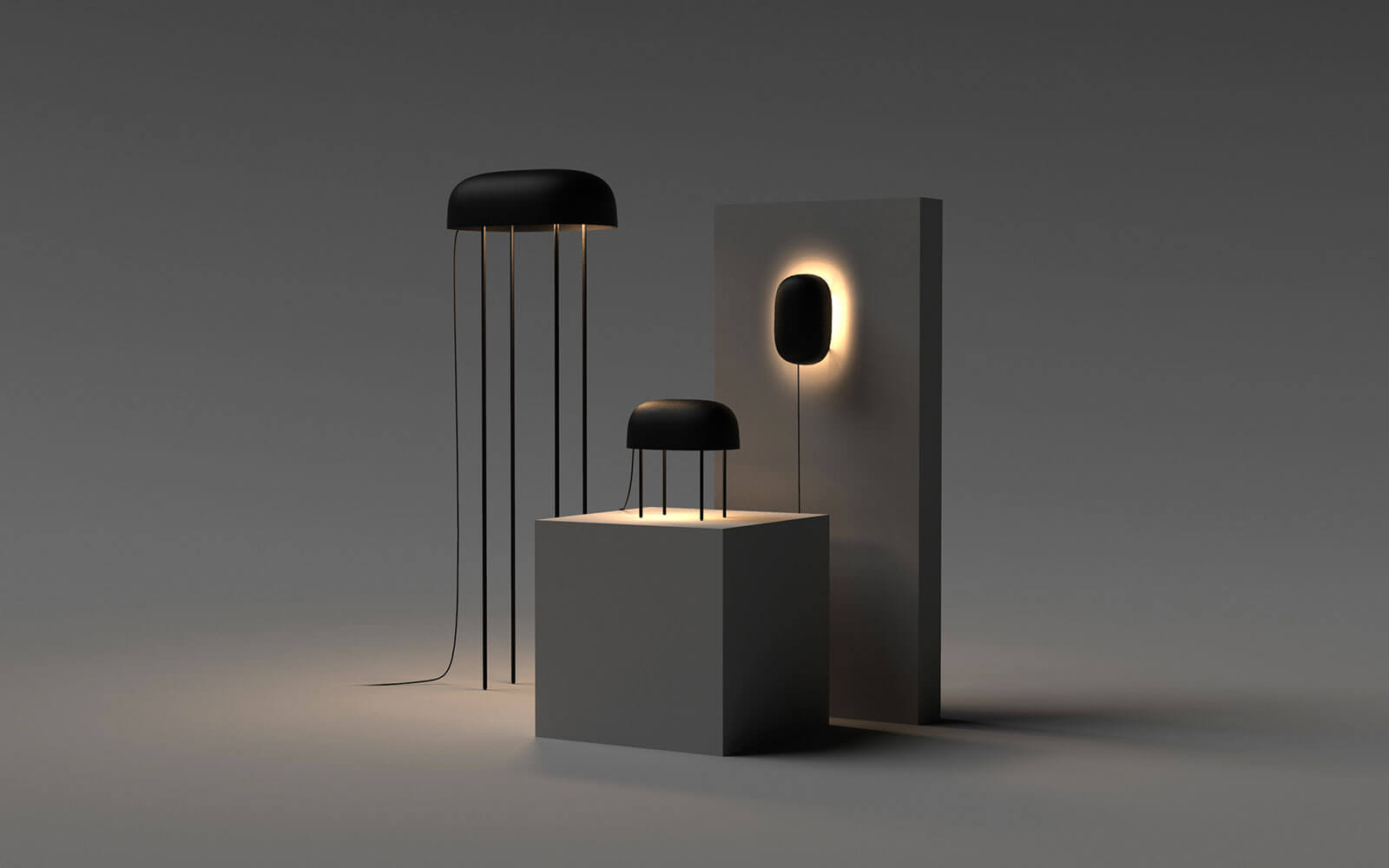 TDE: The importance of the stamp of authenticity that an NFT gives a piece of digital artwork is obvious from a collector’s point of view, but what is the significance of that digital hallmark for the artist?
NB: The unique thing about designing and producing a physical object is that there is a certain point when it’s time to submit the final design and that’s the design that gets produced. It’s this scary and definitive moment that defines that the work is finished. But with digital work, it never really feels finished because you can always go back and update it. But minting a piece of work to the blockchain feels like a completion moment, it’s finished and will forever be how it is. This permanence gives the digital work value but also gives closure to a project.

For me, it seemed like the perfect way to finalise the Chair Sketch Project, which I had only posted online. When you post something on Instagram it almost feels insignificant, but I spent a ton of time on all hundred of these chairs, so it’s nice to have a final resting place for them as NFTs.

TDE: Do you normally consider the fruition of design to be its production in the physical world, or do you see the design as an end in itself?
NB: Traditionally, within design, producing the final design has been the end goal. But I think even before NFTs, this has been called into question with the rise of social media, online blogs and advances in rendering software. It’s so easy now for anyone to create a hyper-realistic rendering and post it online. That in and of itself has some degree of value, but obviously producing the physical product can have a greater impact. 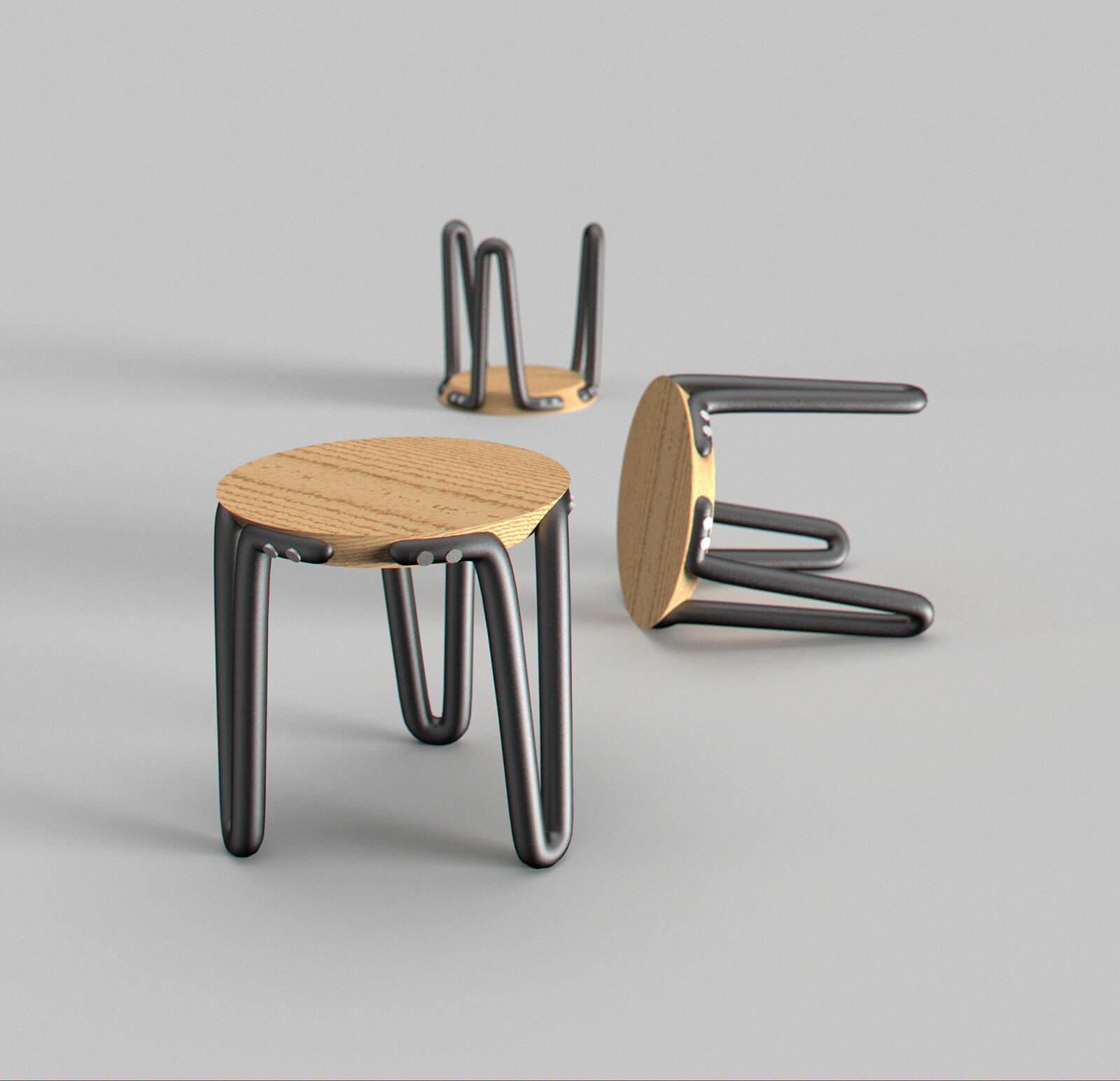 Personally, I love the act of designing and certainly strive to produce my designs, but for certain projects I find plenty of value in just creating a final render. I’ve rendered or prototyped countless conceptual designs with the end goal of simply sharing it online and stretching my creative muscles. To me, I see both digital and physical as different mediums to achieve an end goal. It all just really depends on what the goal is.

TDE: I know you ended up making the ‘Phat Strap Chair #048’, would you like to see any of your other NFT designs made into physical objects?
NB: Well, the story behind that chair is actually quite funny. I had posted the sketch online – the idea was to use these big ratchet straps to tie a bunch of logs to a block of wood and call it a chair. The sketch got reposted and went viral. And the internet just couldn’t handle it, people really didn’t think it would work, so I almost felt obligated to build it just to prove them wrong! But yes, I would definitely like to see some more of my NFTs made into physical objects. 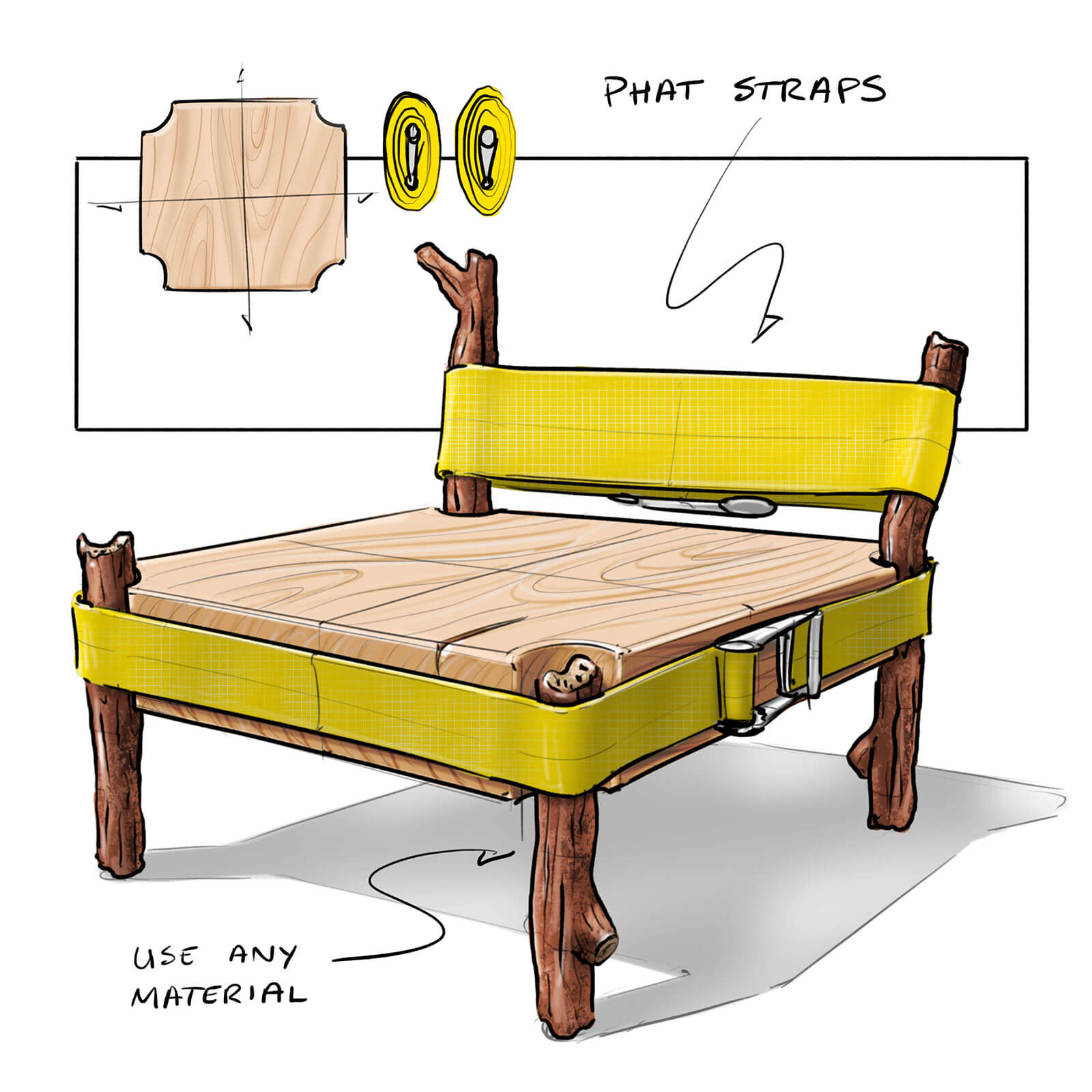 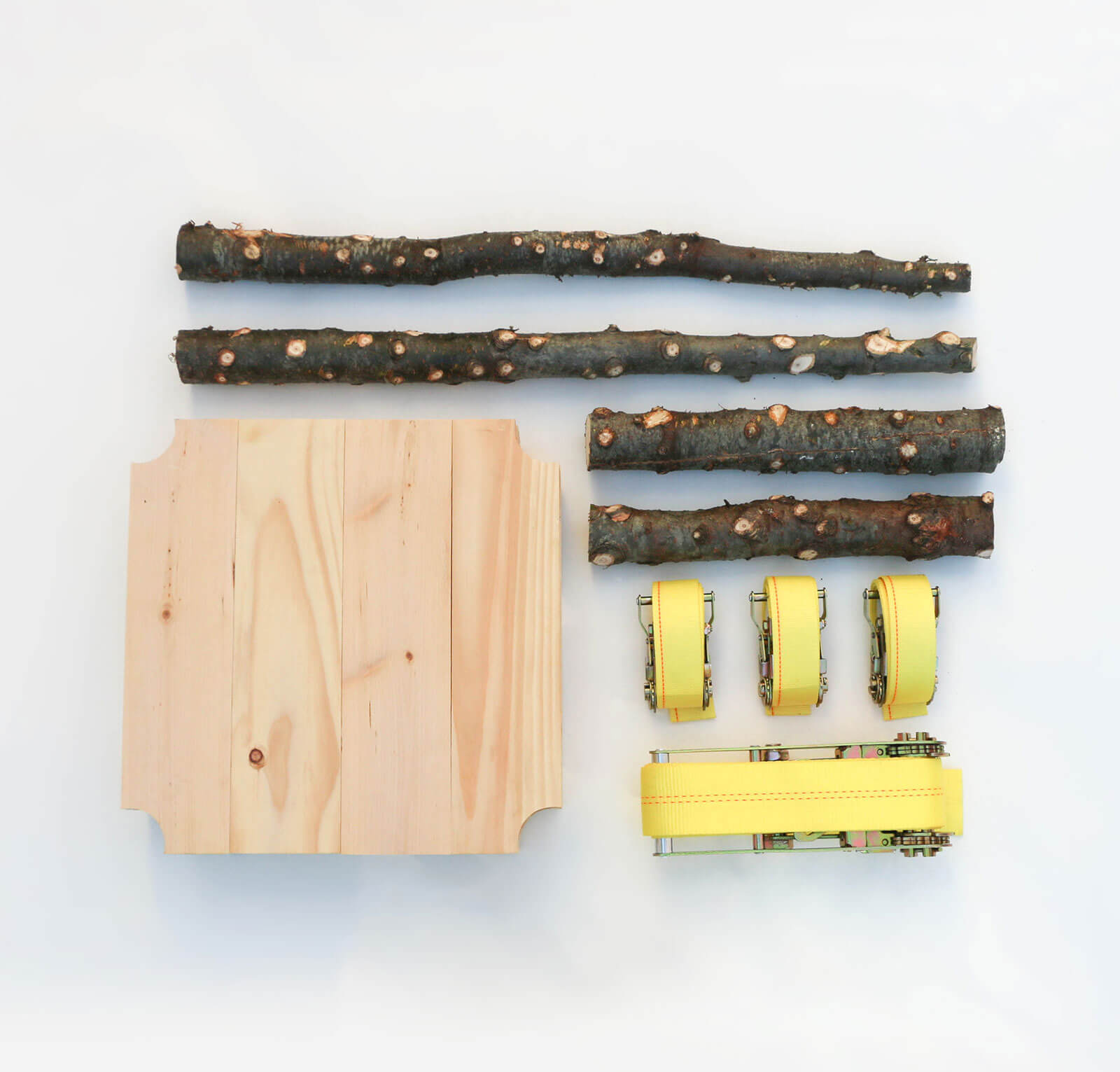 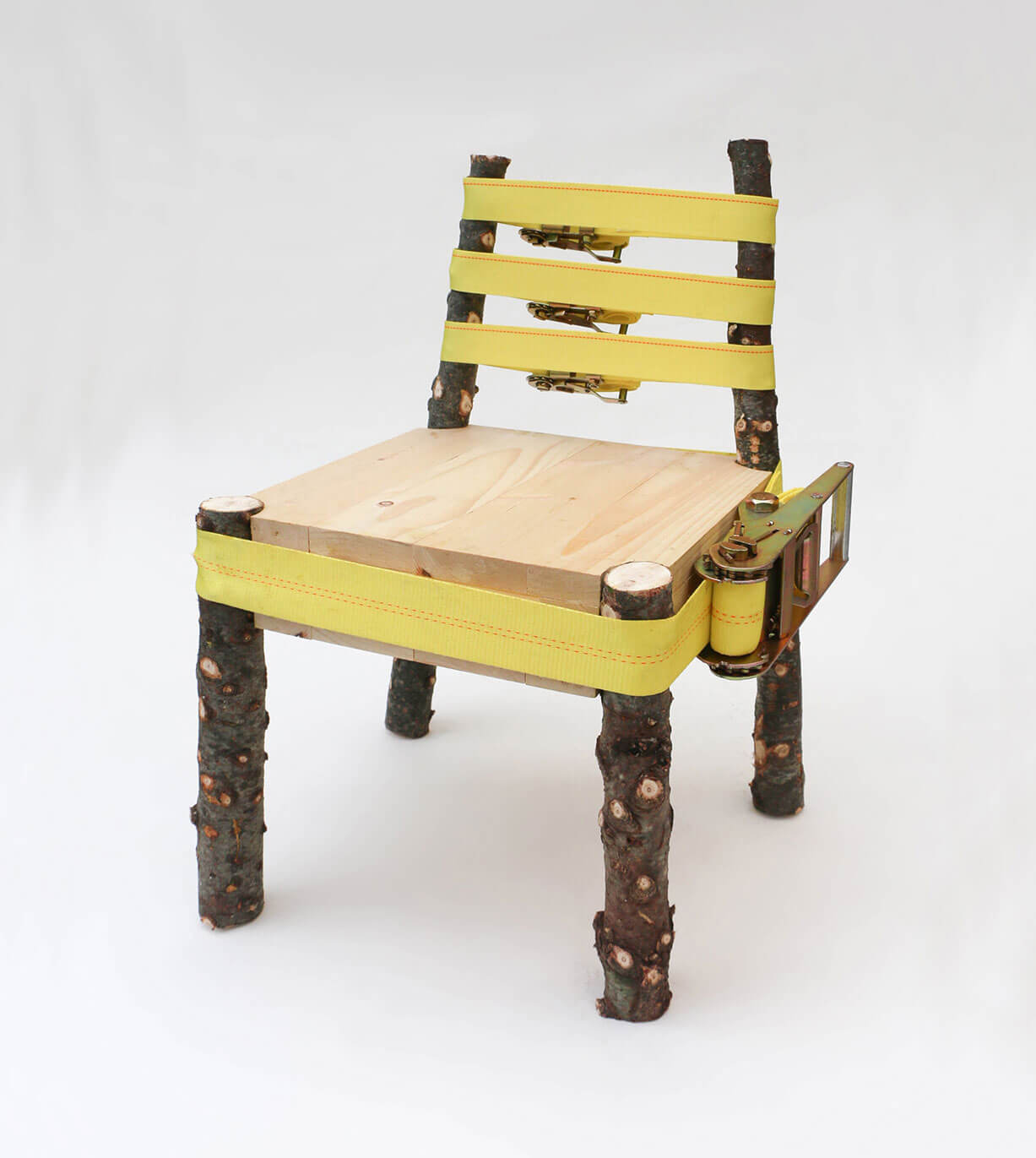 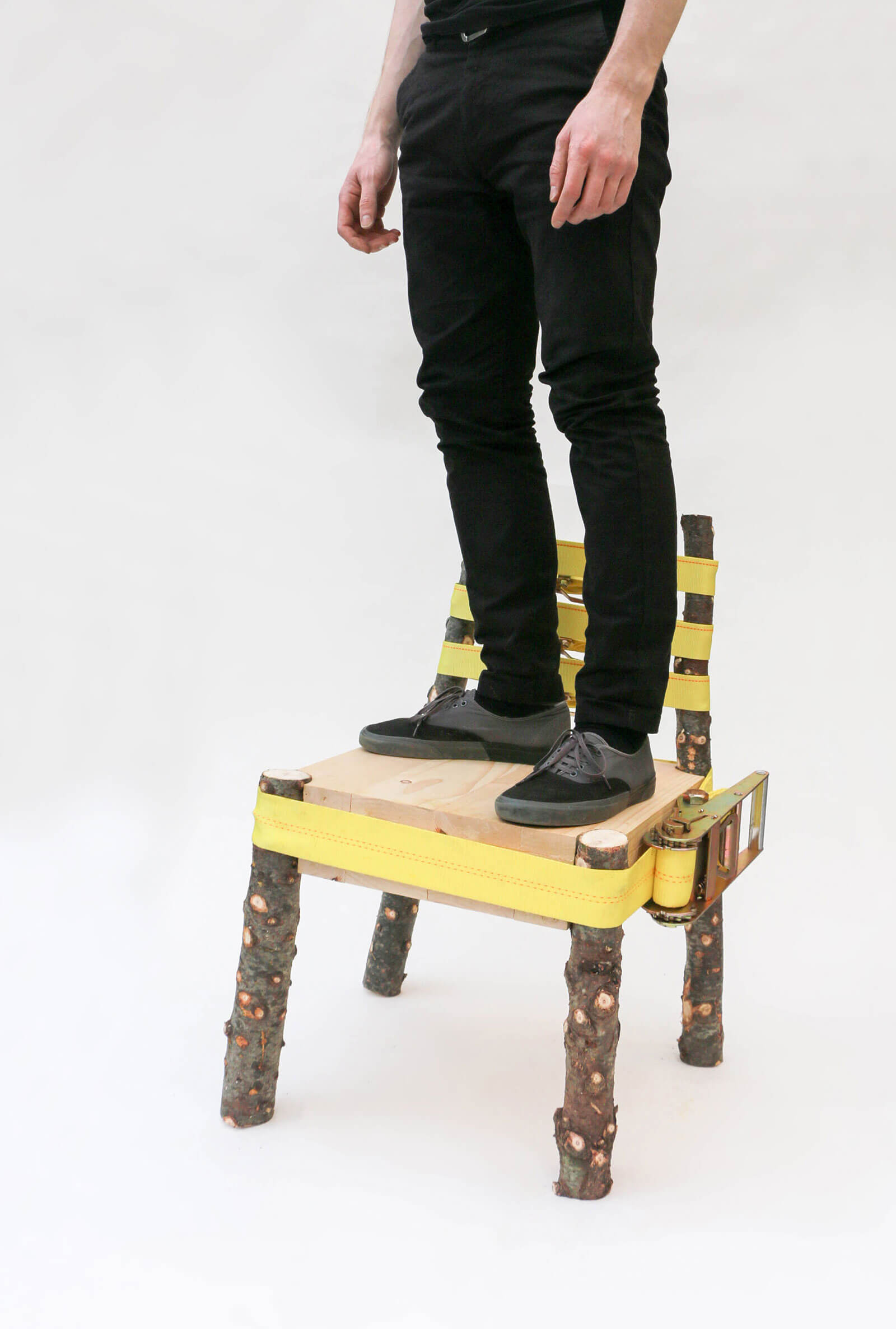 TDE: The sketches aren’t the only NFTs you’ve sold on the blockchain, ‘Hug’ and ‘Moby’ are two of your VR designs that have sold for 1 and 1.1 Ethereum respectively, could you tell us a little more about them?
NB: ‘Moby’ is the first NFT I’ve ever minted. I designed the chair in virtual reality a while back. It was just an Instagram post and it kind of felt ephemeral in a way. I wanted to give it a little bit more importance so I refined the design and created some nice polished renders. I posted it on Foundation, an NFT platform, and it sold!

‘Hug’ was a follow up to Moby. I wanted to do a collection of these VR chairs that are simple but also have that clever delightful aspect to them. ‘Hug’ was a fun design since I decided to make the chair asymmetric. The end result looks like the chair is ready to embrace its user. I also recently minted and sold a third VR chair, ‘Orchid’ – its back legs branch out and hold the moulded plywood seat like a flower.

TDE: It seems like NFTs blew up overnight, where did you first hear about them?
NB: I had been following an artist by the name of John Orion Young better known as JOY. I found his work three years ago at a VR museum called MOR that was showing both of our work. I learned he was selling his work on the blockchain and I had no clue how, or why, but I enjoyed his work regardless. I didn’t research NFTs until late last year when Bitcoin shot up in price again. That’s when I fell down the crypto rabbit hole and discovered NFTs. It took a good bit of reading blogs and listening to discord and clubhouse conversations before the concept actually clicked for me.

TDE: What drew you to get involved with NFTs and blockchain technology yourself?
NB: I’m always keen on experimenting with the latest technology to see how it might fit in with my design practice. I think about how many great designers would always use the latest technology of their time. You think about Eames using moulded plywood, or Dieter Rams, he used acrylic for the first time on a record player. I think that’s an important lesson for any designer, to embrace technology and make it beautiful.

Also, I’d be lying if I said the money didn’t have something to do with it. It’s awesome to be able to monetise a lot of this work I’ve just been giving away for free. Making a living being an independent creative is notoriously hard, so I fully support any creative being able to capitalise their worth. A lot of digital artists have posted their work on social media, contributed immensely to culture, and never see a dime of the ad revenue from those platforms. Blockchain technology is changing the game far beyond NFTs and I’m excited to see the tides turning.

TDE: Finally, what advice would you give to someone thinking about getting involved in NFTs and perhaps buying a piece of design?
NB: I think it’s similar advice that you’d give to someone buying a physical piece of design. Obviously you don’t have to worry about the physical functionality of what you’re buying, but let’s be honest a lot of collectible design isn’t exactly functional either!

Rule number one: research. I highly suggest going to the source, ethereum.org, and understanding the fundamentals of this technology. And of course research the artist or designer as well. Make sure they are dedicated to the technology and not just jumping on the bandwagon.

NFTs are so new it’s hard to predict where it will go, but if you enjoy embracing the newest tech, being a trailblazer, an early adopter, then maybe it’s something for you. 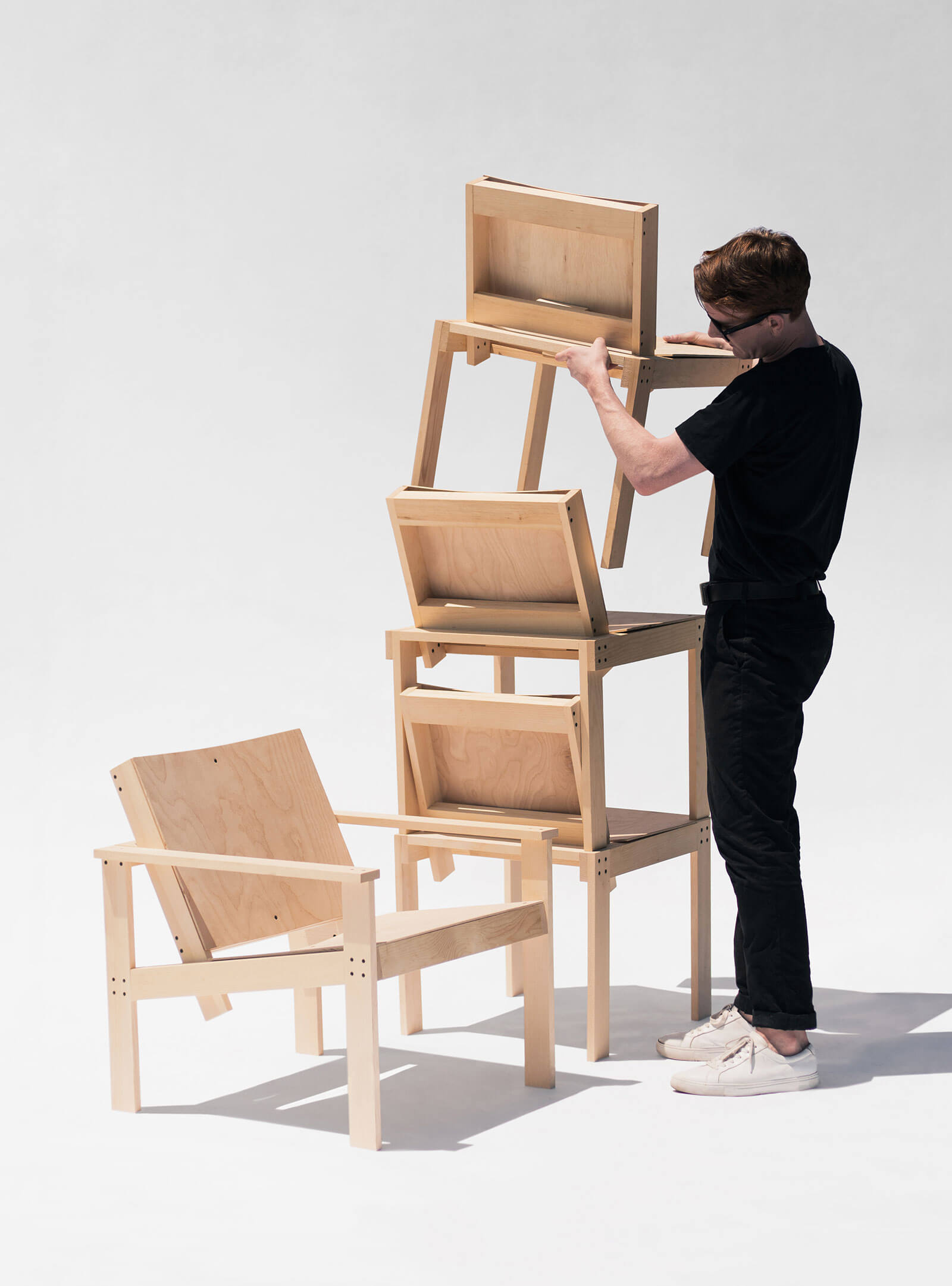 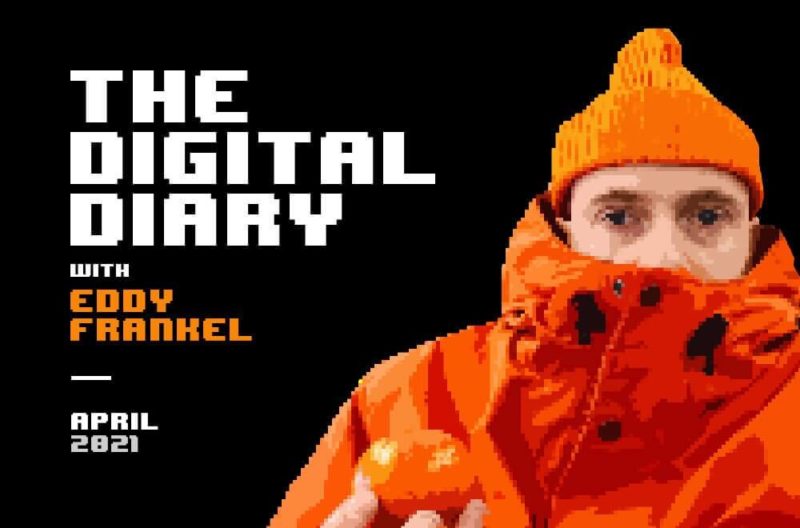 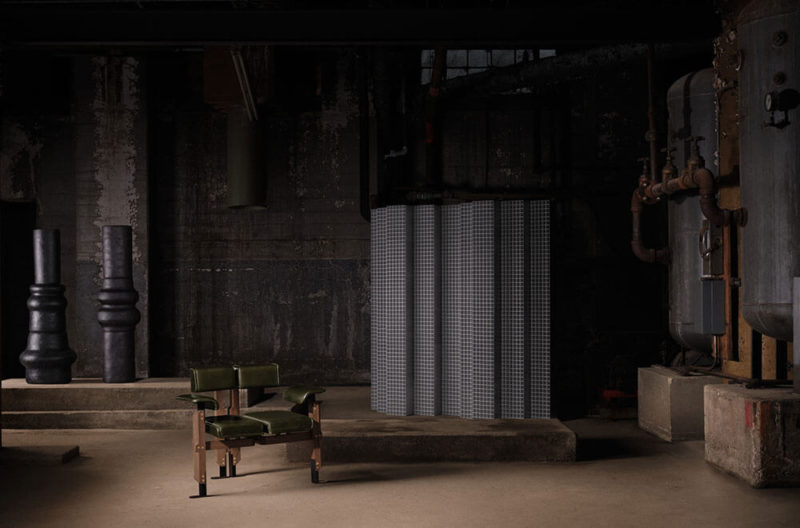 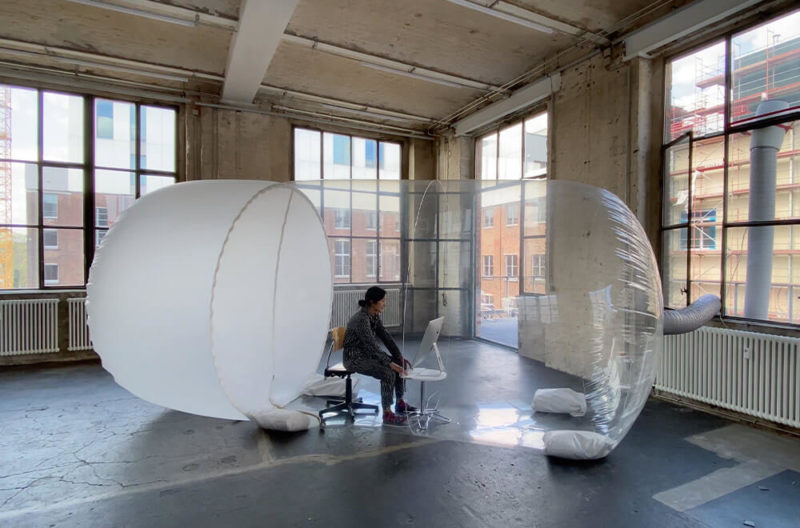 TDE in conversation with the founders of the online archive. 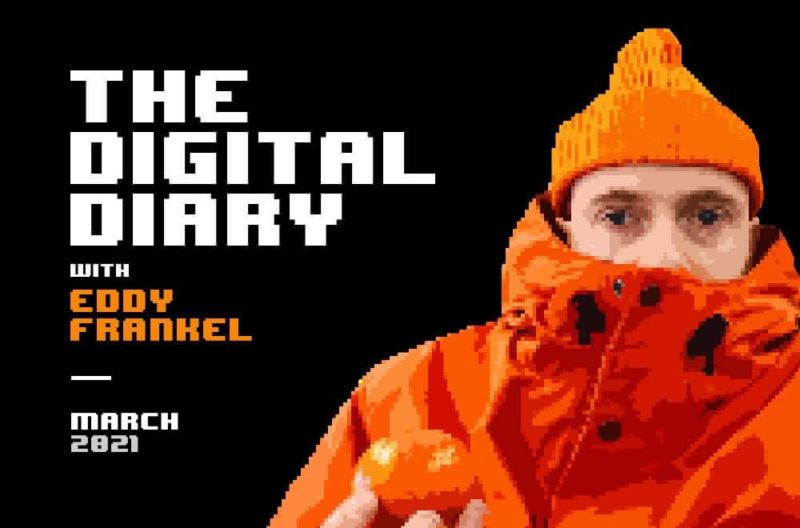 By Eddy Frankel
The Design Edit
For Collectors and Dreamers
Read
Connect
Legal
Join Our Bi-monthly Mailer
Support Us
© 2022 The Design Edit.
All Rights Reserverd
We use Actito as our marketing automation platform. By clicking to submit this form, you acknowledge that the information you provide will be transferred to Actito for processing in accordance with their Privacy Policy and Terms. The Design Edit will use the information you provide on this form to keep you informed with announcements and updates. You can change your mind at any time by clicking the unsubscribe link in the footer of any email you receive from us. We will treat your information with respect.