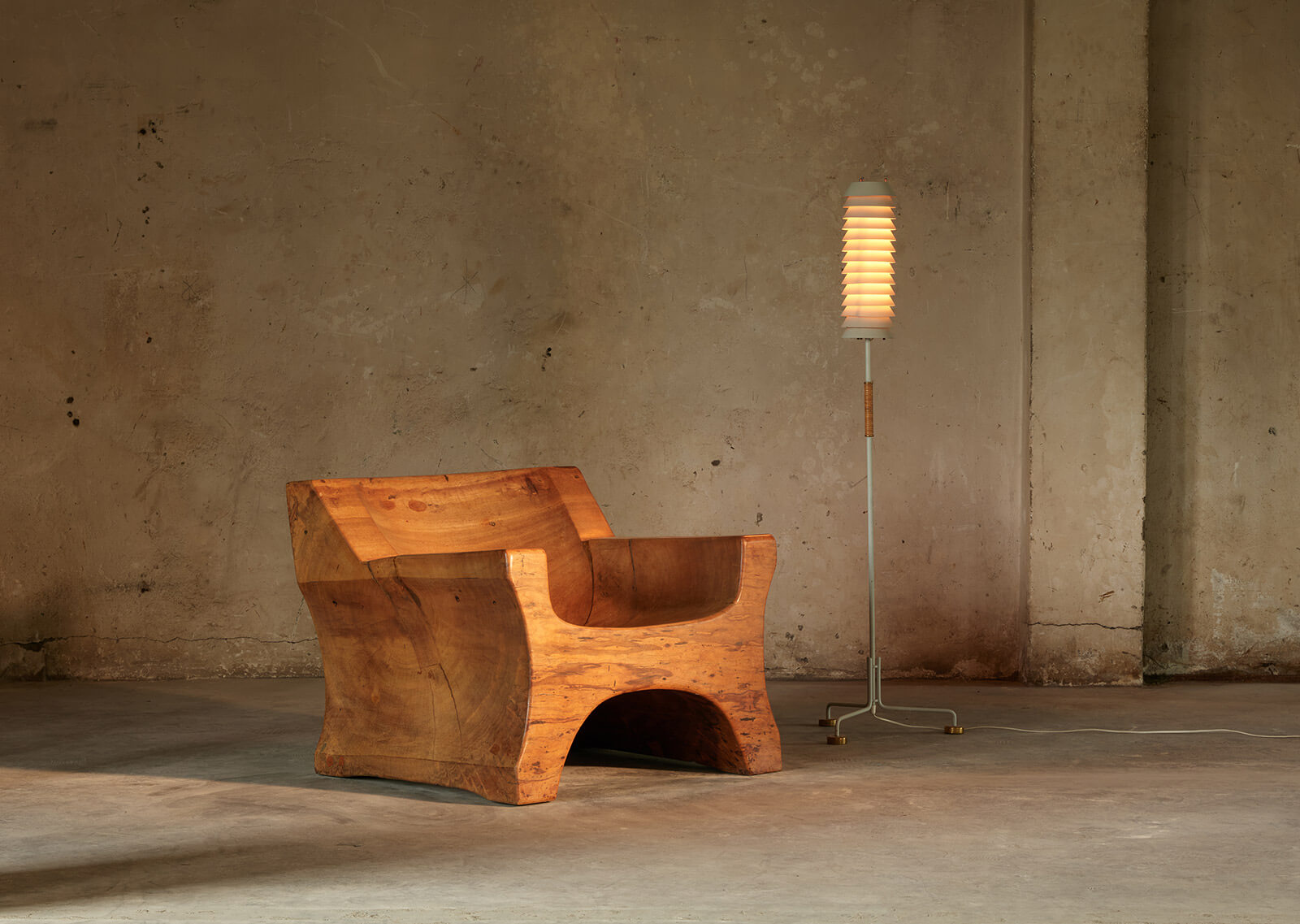 THIS TREMENDOUS THRONE, titled ‘Chair of the King’, is carved entirely out of the pequi wood of Brazil’s tropical savannah. Made by one of Brazil’s great designers, José Zanine Caldas, it represents the strength of his attachment to nature and to traditional handcrafting. This piece comes from a series of work titled ‘Móveis Denúncia’ – or ‘Protest Furniture’ – that draws attention to the environmental destruction of his home region, the eastern state of Bahia.  The series developed in the years after 1964, when, under pressure from the insurgent military dictatorship,  Caldas was forced to resign from his teaching position at the University of Brasilia.  He was unable to resume his tenure until 1987, spending those years in productive retreat in Bahia.

Born in Belmonte, Bahia, in 1919, Caldas was a self-taught artist. He began his career making architectural models out of plywood, working for such eminent Brazilian modernists as Oscar Niemeyer and Lúcio Costa, the architects of Brasilia. Quickly recognising the need for furniture to grace the radical, rational homes being rapidly built in the 1940s, he set up the business Móveis Artísticos Z in 1949 with some colleagues in São Paulo. Through this enterprise Zanine became one of the pioneers of modern furniture design and production in Brazil, specialising in the use of marine plywood to create affordable, light-weight, contemporary furniture for a rapidly growing urban population.

But in 1953 Caldas fell out with his partners and returned to Bahia, to the coastal town of Nova Viçosa. He abandoned the rigid aesthetics and machine methods of Modernism and turned to local materials and techniques. Working with mostly reclaimed wood from the Elecunha company, which had started exploiting the Atlantic Forest a few years earlier, Caldas drew inspiration from the local canoe builders, who knew how to sculpt a canoe from a single tree trunk.  From 1964, he was able to devote himself full-time to this new way of working.  The resulting pieces from the 1970s and 1980s are a denunciation of rampant deforestation and a delighted, sensual, unadorned celebration of the qualities of the discarded wood he has rescued. A forerunner of today’s campaigners for sustainable development, he once said: “Wood is part of the wealth that nature gives to men. We do not have the right to destroy or waste it. The more people there are in the world, the more we will have to make the most out of wood.” But if the wood was one focus of interest, comfort was another, with Caldas ensuring that his sculptural design was also a joy to sit in.

This chair is one of a private collection of pieces that have all come from a house that Caldas himself designed. It is currently available through Morentz Gallery at Masterpiece London 2020 Online.

Morentz – a gallery, a workshop and an upholstery studio in one.