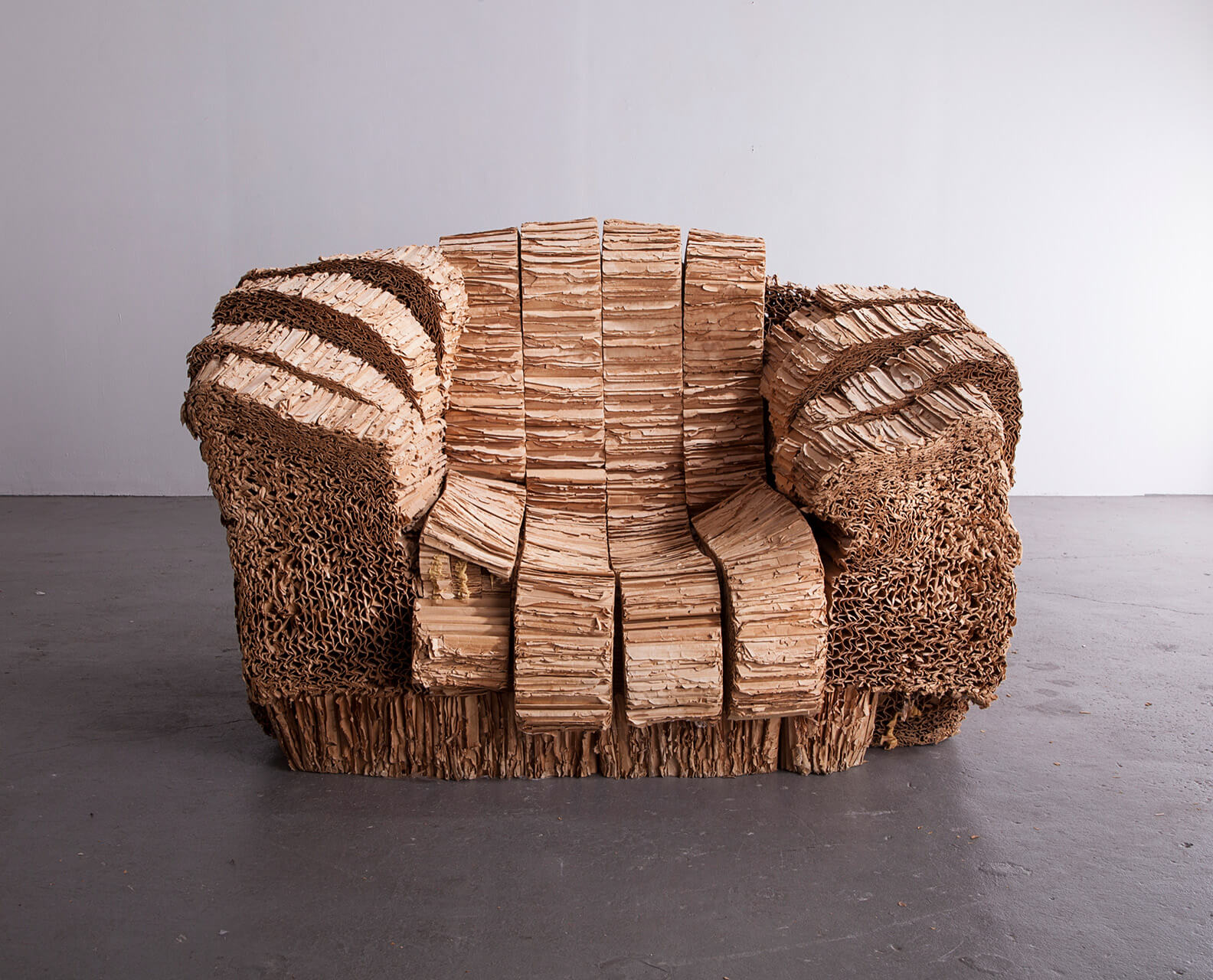 THIS CRAGGY LANDSCAPE of a chair is a joyful improvisation on a single material. Who would have thought that throwaway corrugated cardboard could offer so many textures and such a variety of patterning, let alone provide the medley of structural elements required to make a stable seat? The title expresses the fairy-tale qualities of this characterful piece and its almost animate, lurking motility – as if it might at any moment shrug or shuffle away.

The chair was designed by Frank Gehry, the Canadian-American Pritzker-Prize winning architect best known for his monumental, sweeping, piled up metal-clad Guggenheim Museum in Bilbao. Born in 1929, his first introduction to furniture-making was in 1954, when, while serving in the U.S. Army, he designed furniture for the enlisted soldiers. But it was in the late 1960s, before he had made a significant name for himself as an architect, that he embarked on a series of experiments in furniture which won him instant acclaim. Between 1969 and 1973 he worked on his ‘Easy Edges’ series, using corrugated cardboard packed tightly in sixty layers to create strength, which he then faced with hardboard, leaving the material otherwise untreated with colour or decoration. Gehry could then bend this low-cost material into an array of amusing yet stable shapes.

‘Grandpa Beaver’ comes from a later series, ‘Experimental Edges’, launched in 1979, a year after the deconstructive transformation of his family home in Santa Monica had drawn widespread admiration. For ‘Experimental Edges’, the raw material is left even rougher, while the variety of ways Gehry uses the material is multiplied. Surface is as important as form. It is as if he is a musician riffing on a theme.

This particular chair was part of a series of ‘Experimental Edges’ furniture produced by Vitra from 1986, which Gehry later integrated into the 1990s interior of the Chiat/Day Building in Venice, California, famous for its giant binoculars, which he designed in 1991 in collaboration with Claes Oldenberg. This example was originally placed in the executive offices and currently features in R & Company’s virtual exhibition, Furniture by Architects. Another example is up for sale in the Los Angeles Modern Auctions ‘Modern Art and Design: Timed Online Only Auction’, 30th July until 9th August.