A report from the French capital, before the gallery doors closed.

FRANCE’S SECOND LOCKDOWN, which went into effect on October 30th, means that Parisian galleries are again closed until further notice. But throughout October, The Design Edit was out and about in the city, enjoying the autumn’s exhibitions as well as browsing the collectible design that was on show at the physical fair, Asia Now.  Besides the sheer pleasure of seeing actual three dimensional objects disposed in real architectural spaces, there was some outstanding design on view.

Aldo Bakker: Slow Motion
Carpenters Workshop Gallery
Exquisitely refined and perfectionistic, Aldo Bakker’s pieces take time to develop, mature and be brought to life. This exhibition, which segues from his show in New York in spring 2019, is testament to his cerebral approach to creating meticulously-made pieces. 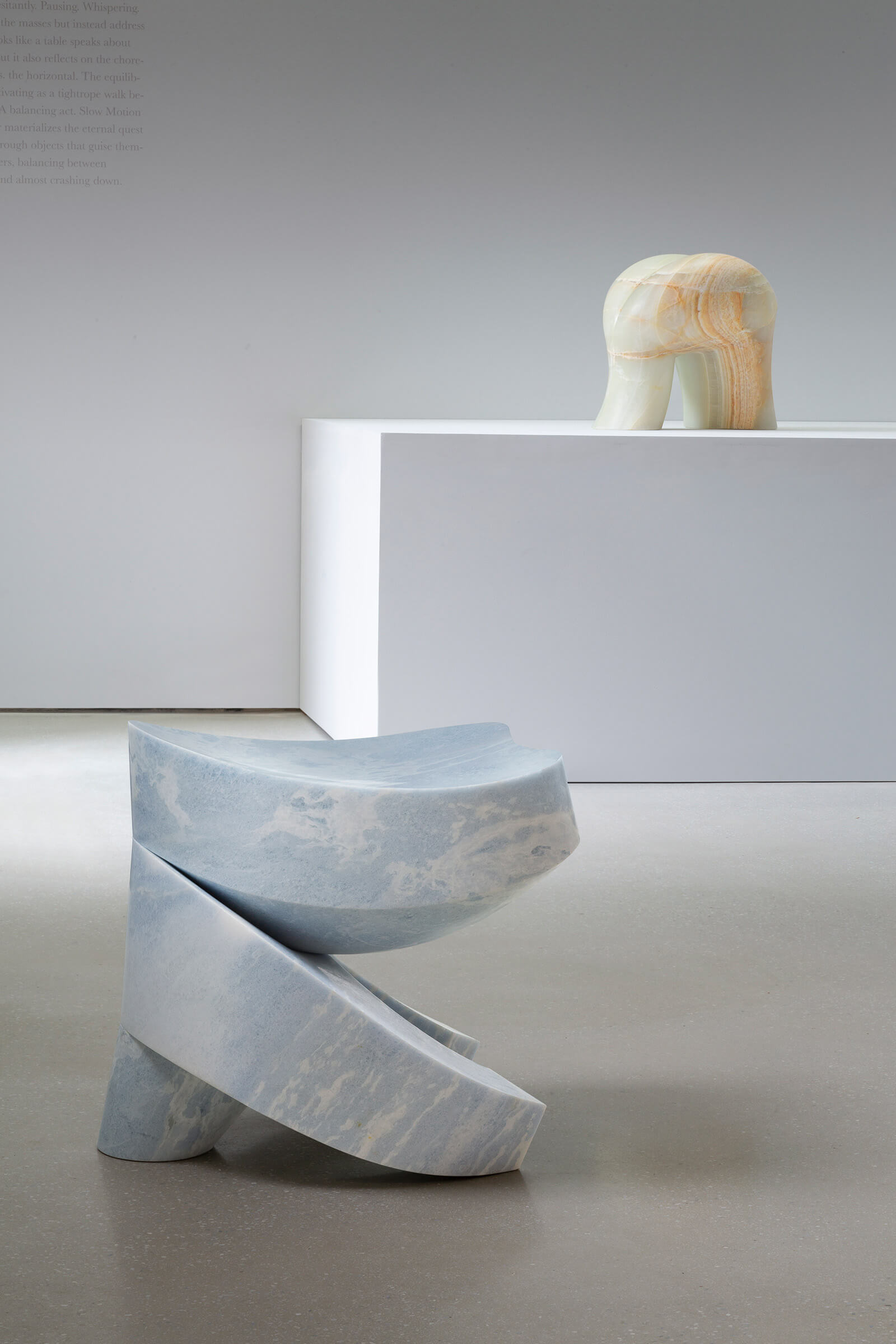 The Dutch designer’s work does not scream for attention. His pieces are discreet, modest and unassuming, expressing an understated luxury and sophistication. Every detail is carefully considered, every idea distilled and further reflected upon. The work invites contemplation and encourages a desire to become fully acquainted with an object – to  engage with it from every angle, observe its aesthetic qualities and enjoy the choice of material and tonalities.

The son of the artist and jewellery designer Emmy van Leersum and the jewellery-lighting-furniture designer Gijs Bakker, a co-founder of Droog Design, Bakker, 49, is an autodidact. His work occupies an interdisciplinary space between art and design, reflected, for instance, in his carved stools in onyx and marble, which resemble small, crouching figures. Bakker, who is softly spoken, describes these sculptural stools as “introverted”. 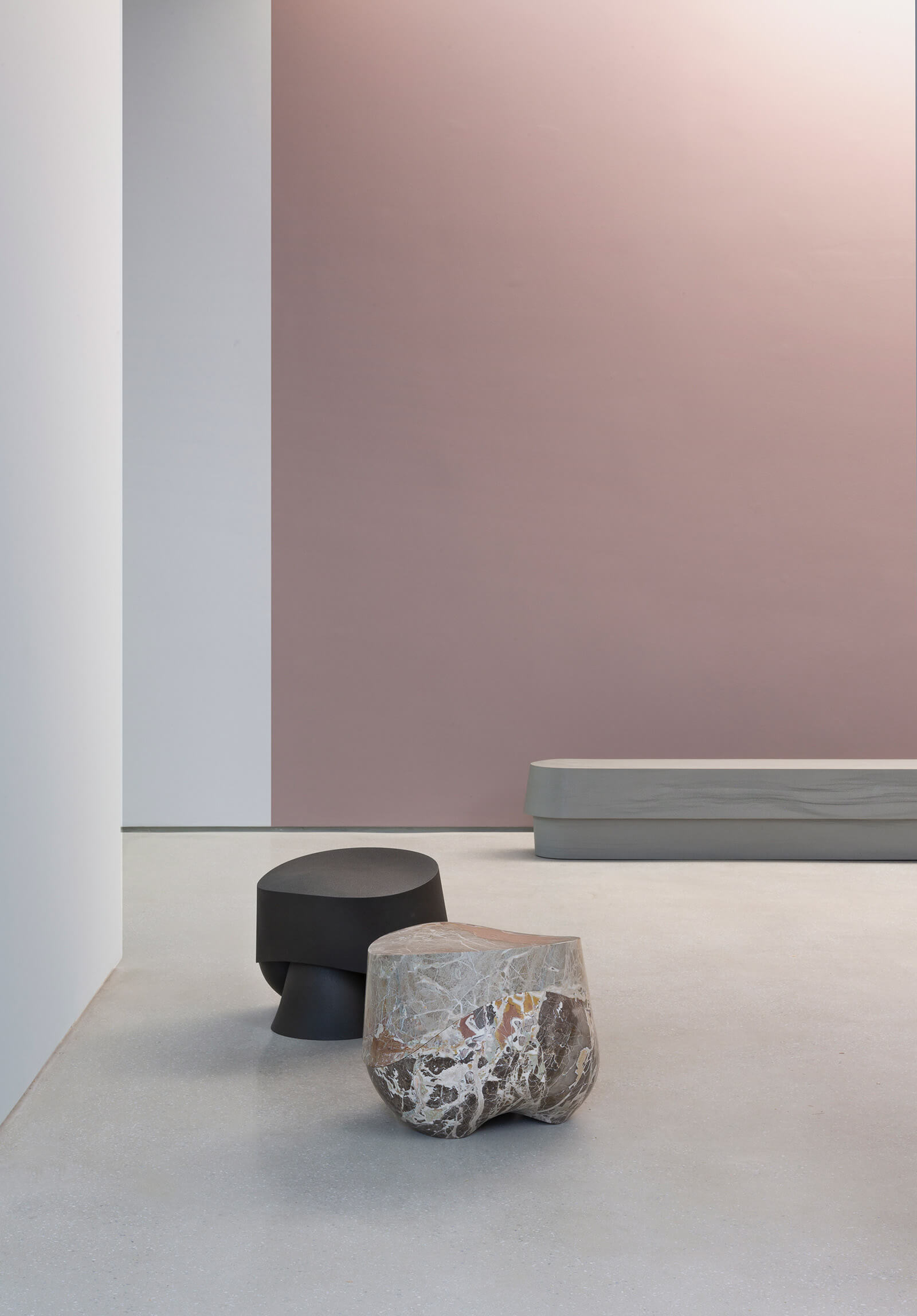 More extroverted, perhaps, is one of the other new pieces on display. ‘Swing Red Urushi’ is a swing in sumptuously dark red and elegantly curving urushi – a Japanese lacquer. Made by Sergei and Marina Kirilov of Studio Lacquer Decor in the Netherlands, it exemplifies the precise sense of balance in Bakker’s work.

Léa Mestres: I am a living room
Galerie Scène Ouverte
Léa Mestres was reflecting on how people spent more time confined in their living rooms during France’s first lockdown when she conceived the title of her first solo show. Rather than responding in a melancholic way, the young French designer has created a convivial exhibition of brightly coloured pieces that speak of playfulness and optimism. “The lockdown was a complicated period for a lot of people and I wanted to reflect on how to make a homely environment, with objects that have personality, in order to emphasise joy, sympathy and humour,” Mestres, 28, says. 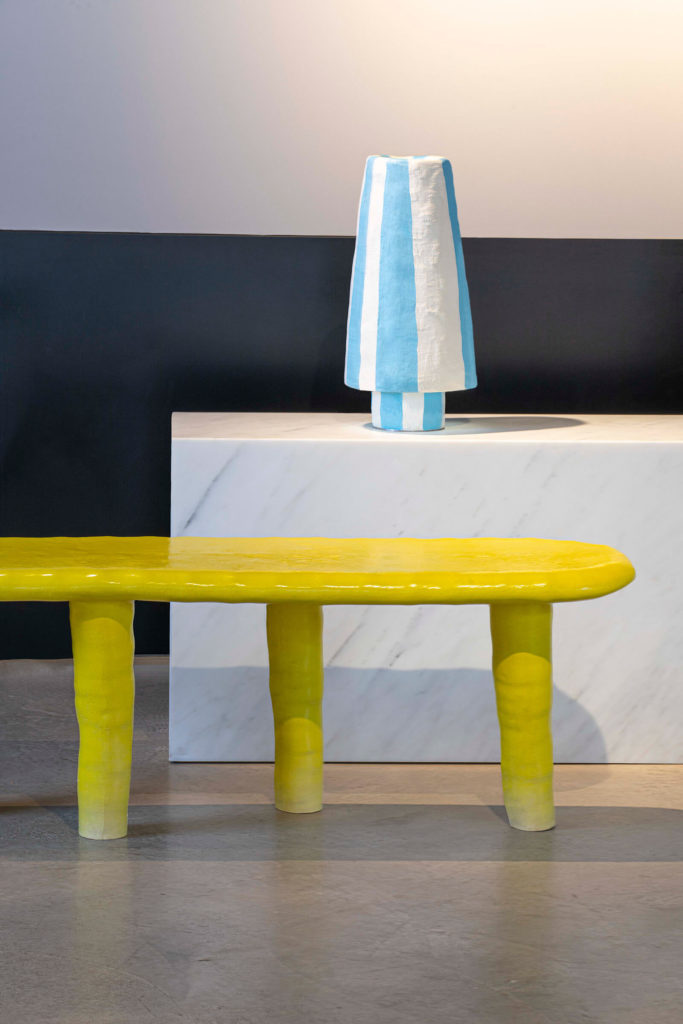 The show at Galerie Scène Ouverte, founded by Laurence Bonnel and situated above a restaurant in a pedestrianised passage in Paris’s chic seventh arrondissement, brings together furniture, lamps and rugs from three collections. The first is the ‘Crépis’ collection in unsmoothed plaster which Mestres began whilst studying at the Design Academy Eindhoven in the Netherlands. Comprising cacti-shaped sculptures with lampshades at their tips, sherbet-toned, striped table lamps and a hybridised table-and-lamp ensemble, the pieces possess a childlike, almost Disney-esque quality. The objects culminated from Mestres drawing freely on paper and leaving the possibility for any final decision about colours to be made in the last stage of the production process.

The ‘Bubble’ collection in aluminium, meanwhile, was created from computer-generated drawings. Deliberately asymmetrical and with gentle, curvaceous forms, a silver bench has backrests of different heights and a dark green armchair has differently shaped arms. Exuding individuality, both pieces are expressive of the imperfections of human beings. 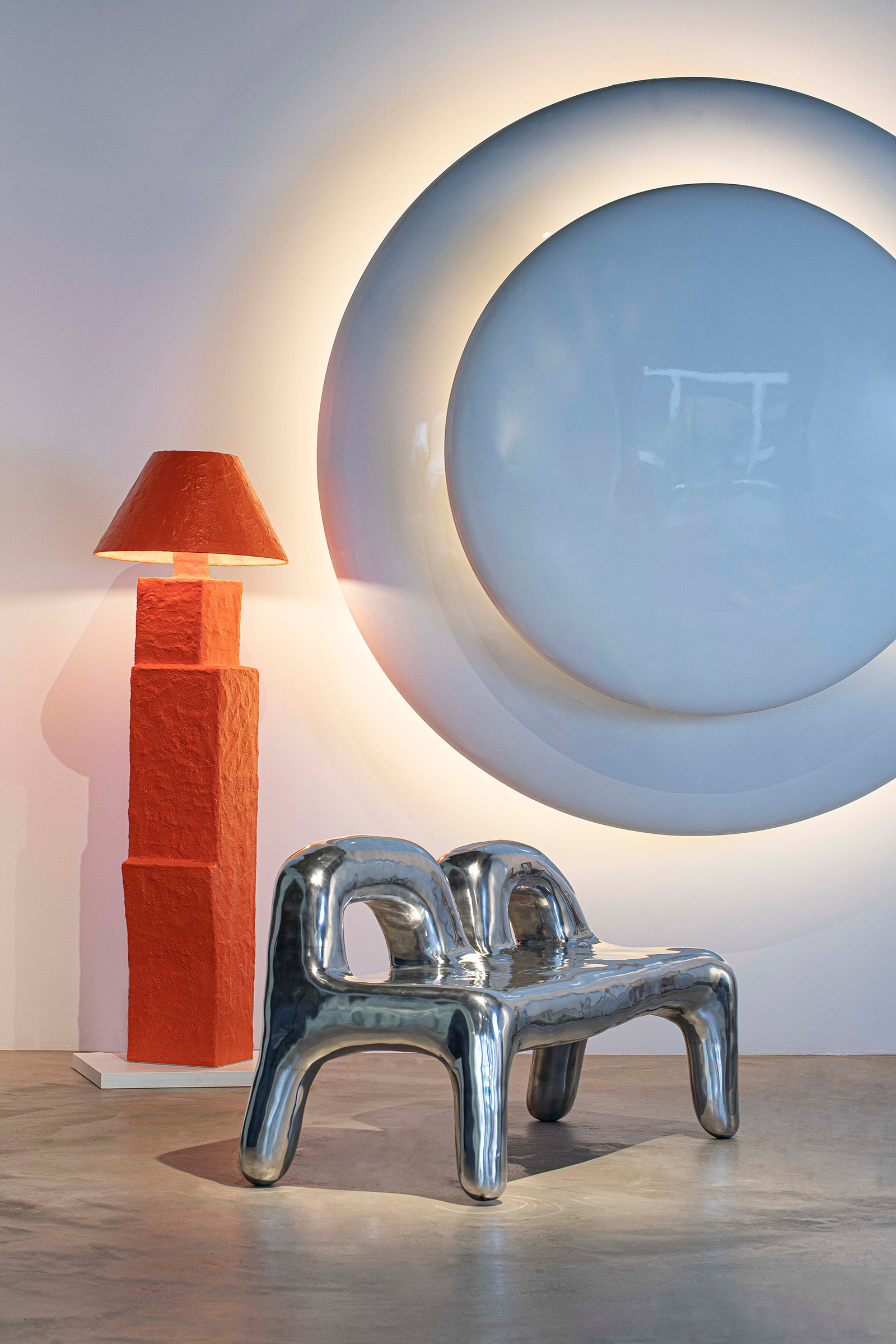 Lying on the floor are two tufty rugs developed from taking lines from various shapes in order to make abstract, bold, digital compositions. Mestres hired a friend, Maxime Mouron, to achieve the tufty finish. The last piece in the show is a mosaic chair made from tiny silver tiles: it’s a tribute to Niki de Saint Phalle’s mirror room at the Tarot Garden sculpture garden in Tuscany.

Under France’s second lockdown, Mestres plans to further develop her ‘Crépis’ lamps. “Normally lampshades are an after-thought but I’d like them to become the focal point of the piece,” she says.

10 Ans Déjà!
Galerie Gosserez
In the heart of the Marais, a few doors away from Thaddaeus Ropac and Karsten Greve, is Galerie Gosserez. Founded by Marie-Bérangère Gosserez in 2010, the contemporary design gallery celebrates its tenth anniversary this year. Previously a dealer at the St-Ouen flea market and an auctioneer, Gosserez is one of several female gallerists, along with Béatrice Saint-Laurent, Maria Wettergren, Armel Soyer, Aline Chastel and Sophie Negropontes, to make her mark on the Paris design scene.

The anniversary exhibition features pieces by ten international designers on the ground floor and in the vaulted stone basement. The selection includes new works by Damien Gernay and Elise Gabriel with her partner Bertrand Gravier, as well as the first works created for the gallery by the upcoming Roxane Lahidji and Lukas Cober. 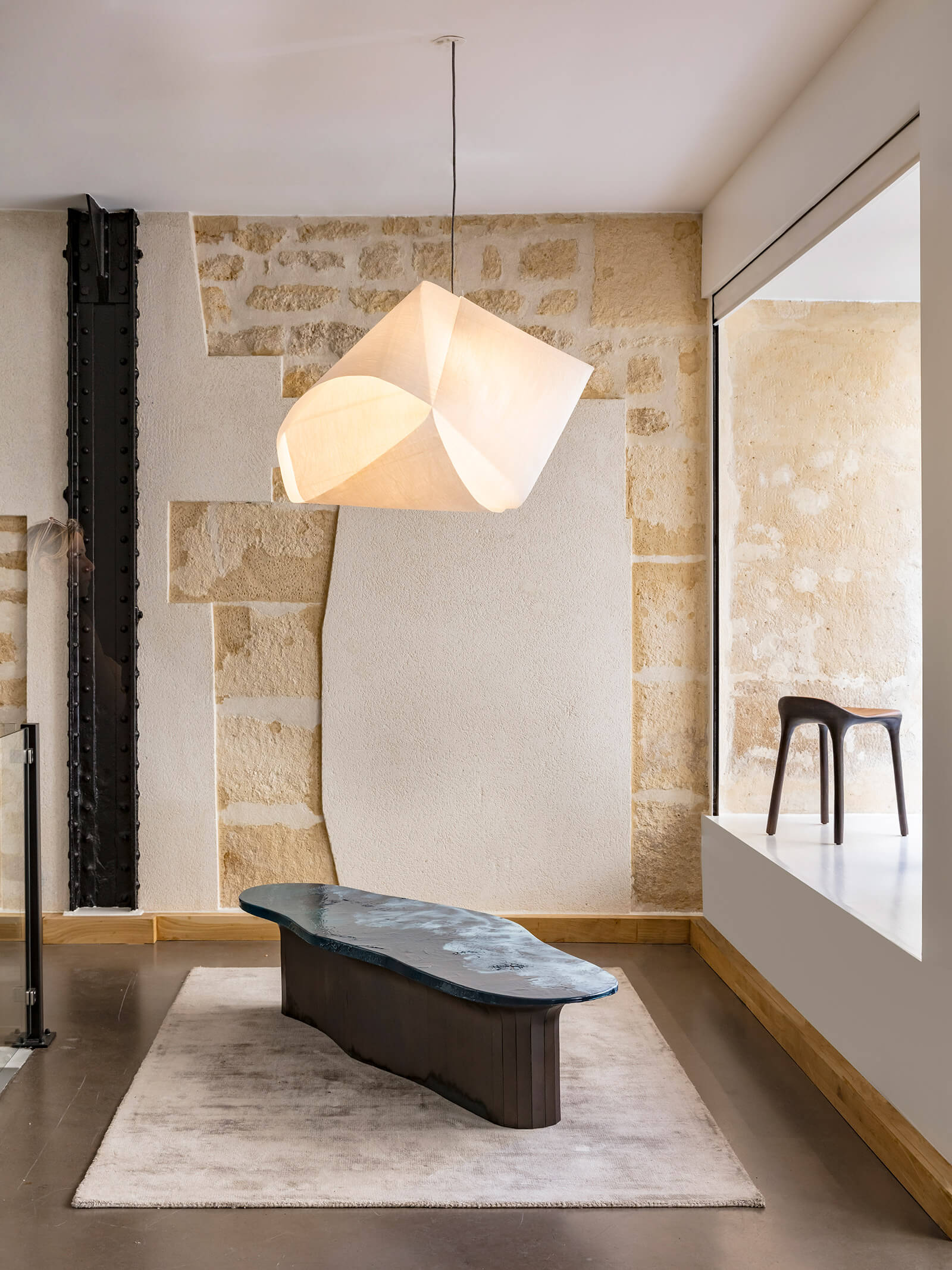 The good news for Gosserez is that two of the pieces on display have been acquired by the Mobilier National, which is connected to France’s culture ministry and purchases furniture for its national collection. The first is the ‘Brass’ desk by Valentin Loellmann, made from blackened oak and brass, its striking shape vaguely reminiscent of a boomerang. The second is a pair of ‘Nida’ lamps by Vincent Poujardieu whose golden, perforated forms recall honeycombs. Each lamp is composed of several layers of a type of aluminium used in the aeronautical industry and gold-plated stainless steel. 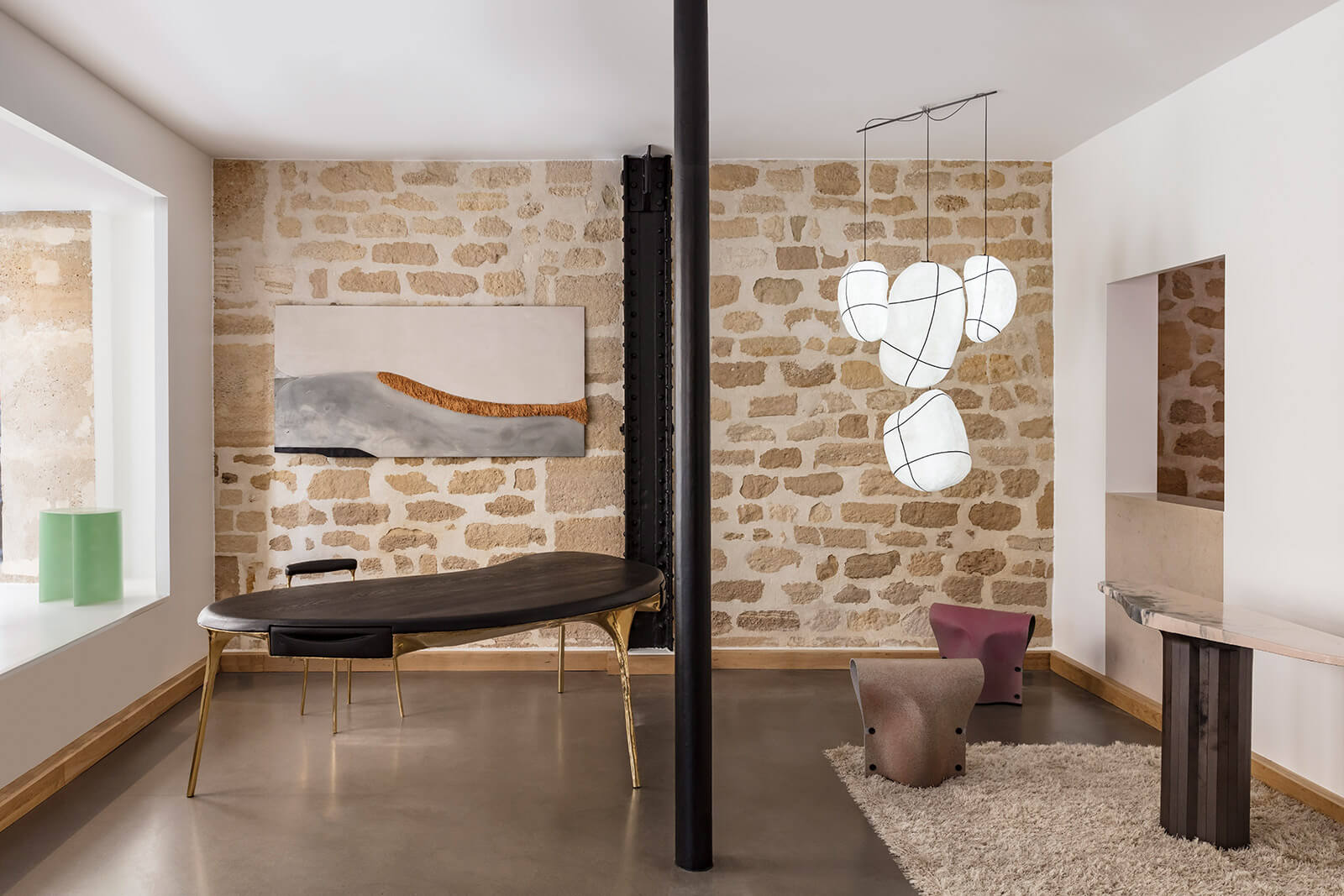 Diane de Kergal’s ‘Emergence’ pendant lights are fascinating. Made by silkworms weaving their cocoons around Kergal’s casts, they are an entrancing collaboration between the interior designer and the natural world. 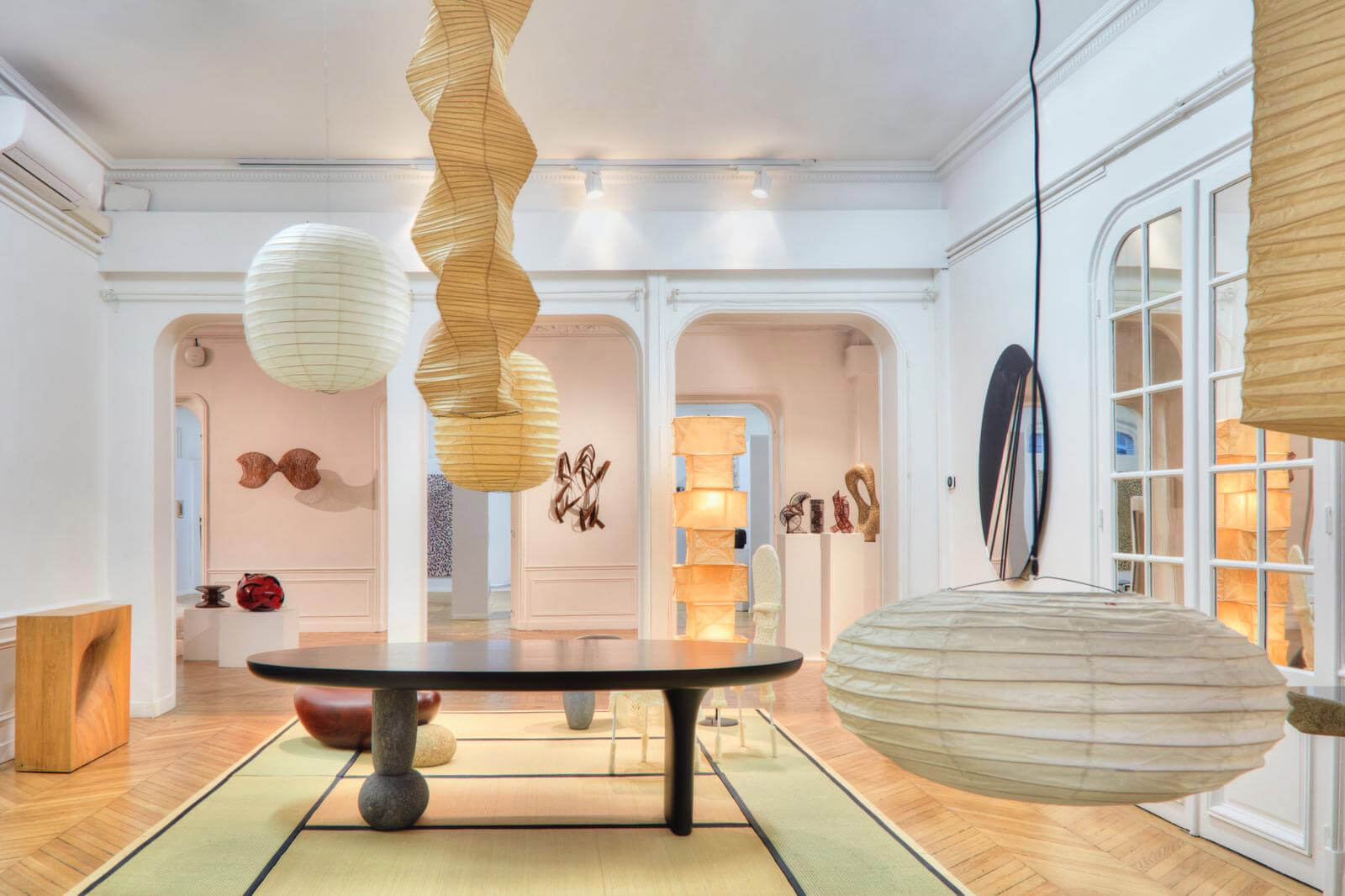 Choi is one of South Korea’s leading contemporary designers and his sober, sophisticated pieces made from natural materials are graceful, tranquil and meditative. Subtly evoking aspects of Korea’s history of art and craftsmanship, they speak of spirituality, a deep respect for nature and a quest for harmony. They also elicit marvel, as the materials have been combined in almost gravity-defying ways. This was seen in an oval wooden table with legs made from stone and basalt, as well as in a low, irregularly-shaped basalt table resting on a small stone.

Unique Design X Shanghai, meanwhile, presented an eclectic group show which was exuberant, fresh and dynamic. Titled ‘The World is Ours’ and curated by Leo Orta, Raffaella Florio and Morgan Morris, the pop-up platform was intended to underscore the spirit of collective consciousness during the pandemic. What stood out were the young French designer Audrey Large’s 3D-printed objects in twisted, innovative shapes that can be used as bowls or vases – although their functionality was not immediately apparent. Also eye-catching were sculptural furniture and lighting pieces by the design duo OrtaMiklos (Leo Orta and Victor Miklos). The two young designers, who met whilst studying at the Design Academy Eindhoven, made the pieces during France’s first lockdown. Combining aspects of figuration and abstraction, they are imbued with youthful energy and experimentation.  These are the qualities that will carry us all through lockdown! 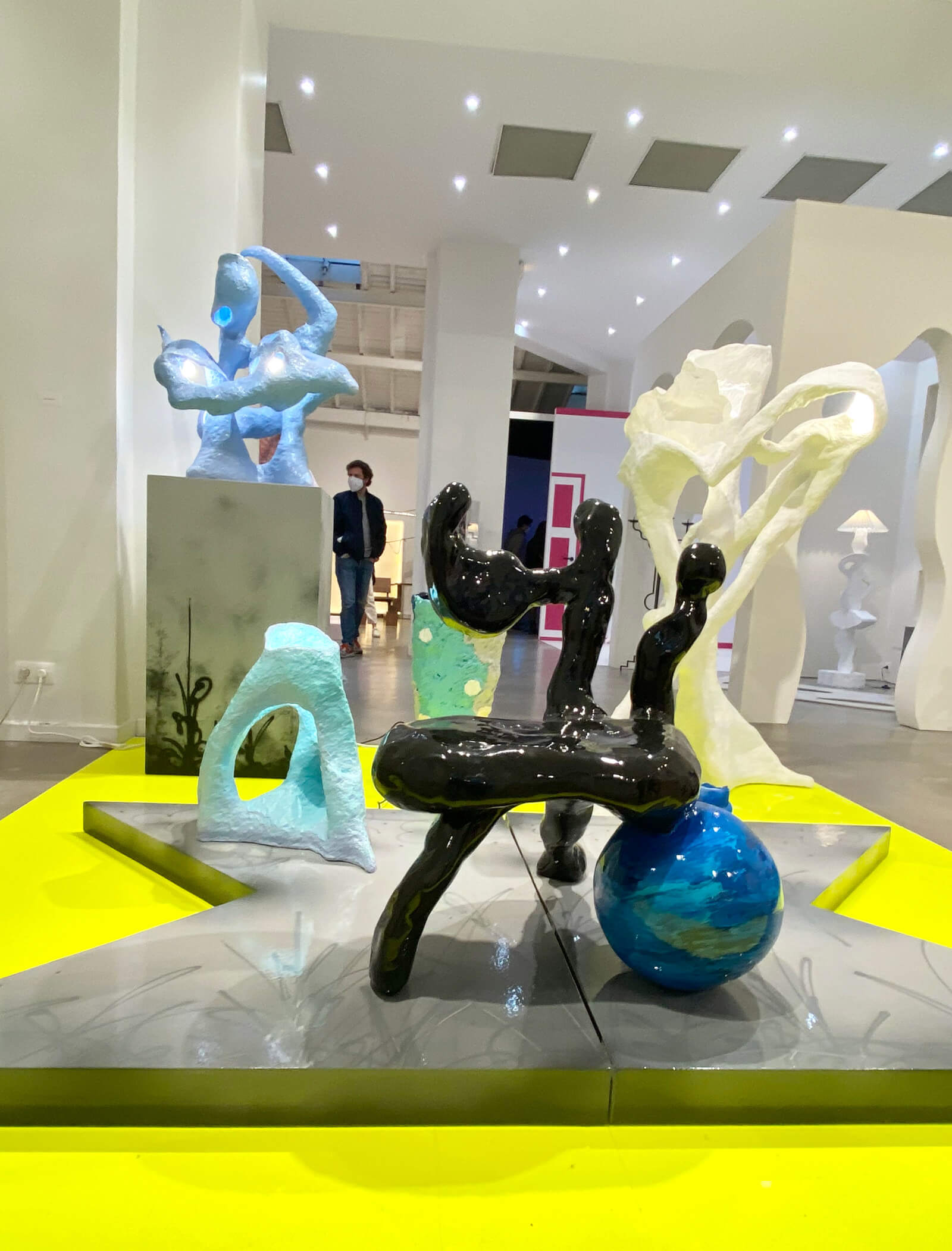 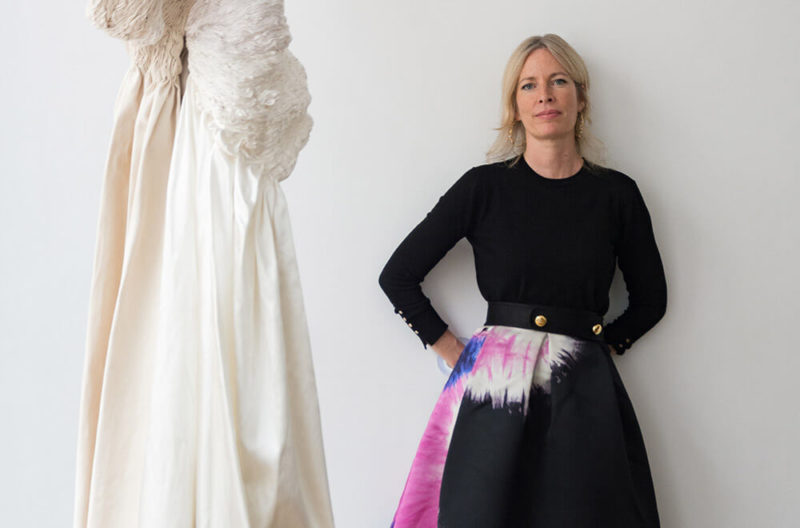 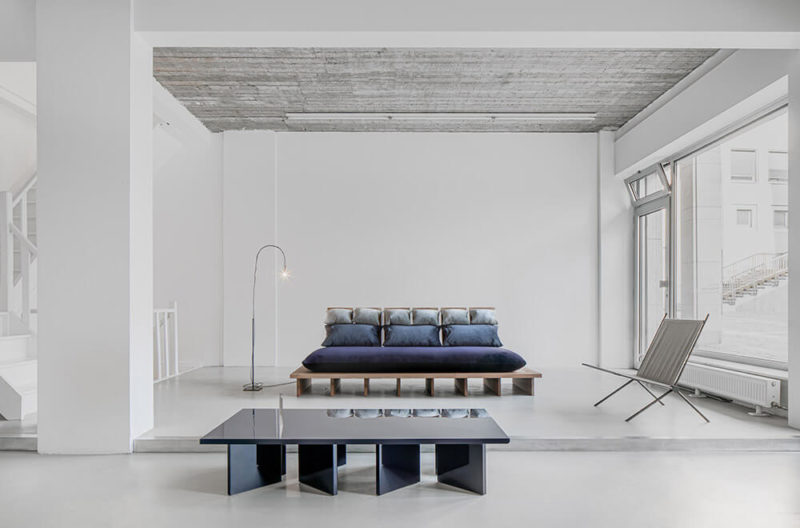 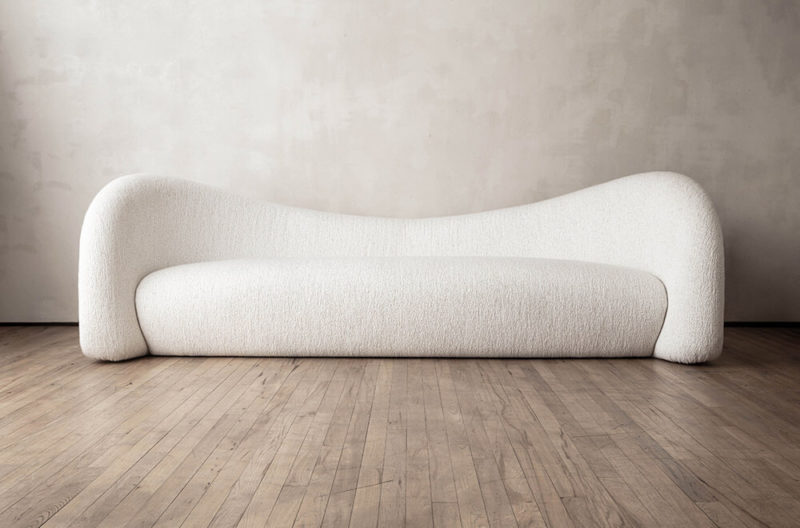 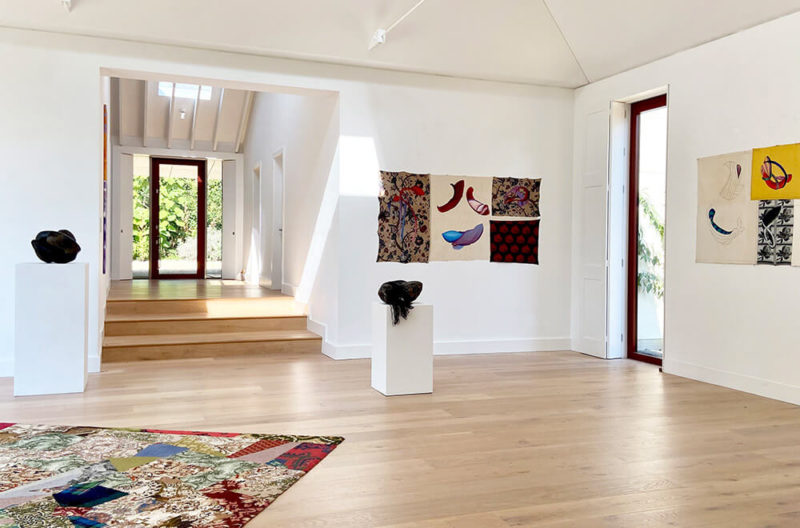