The godfather of London’s limited-edition world.

WHEN DAVID GILL opened his first small gallery in 1987 on London’s Fulham Road it caused a bit of a stir. For a start, its new and rather bold concrete storefront marked it out among the locality’s fancy English decorators and glittery antique shops, as did its contents. The first show was of interwar art and objets by Alberto and Diego Giacometti, with furniture by the French Émile-Jacques Ruhlmann, one of the most glamorous exponents of the art deco style. “Those pieces are worth millions now,” says Gill of the Ruhlmann. “But even in the late 1970s, Christie’s wouldn’t touch Art Deco.” 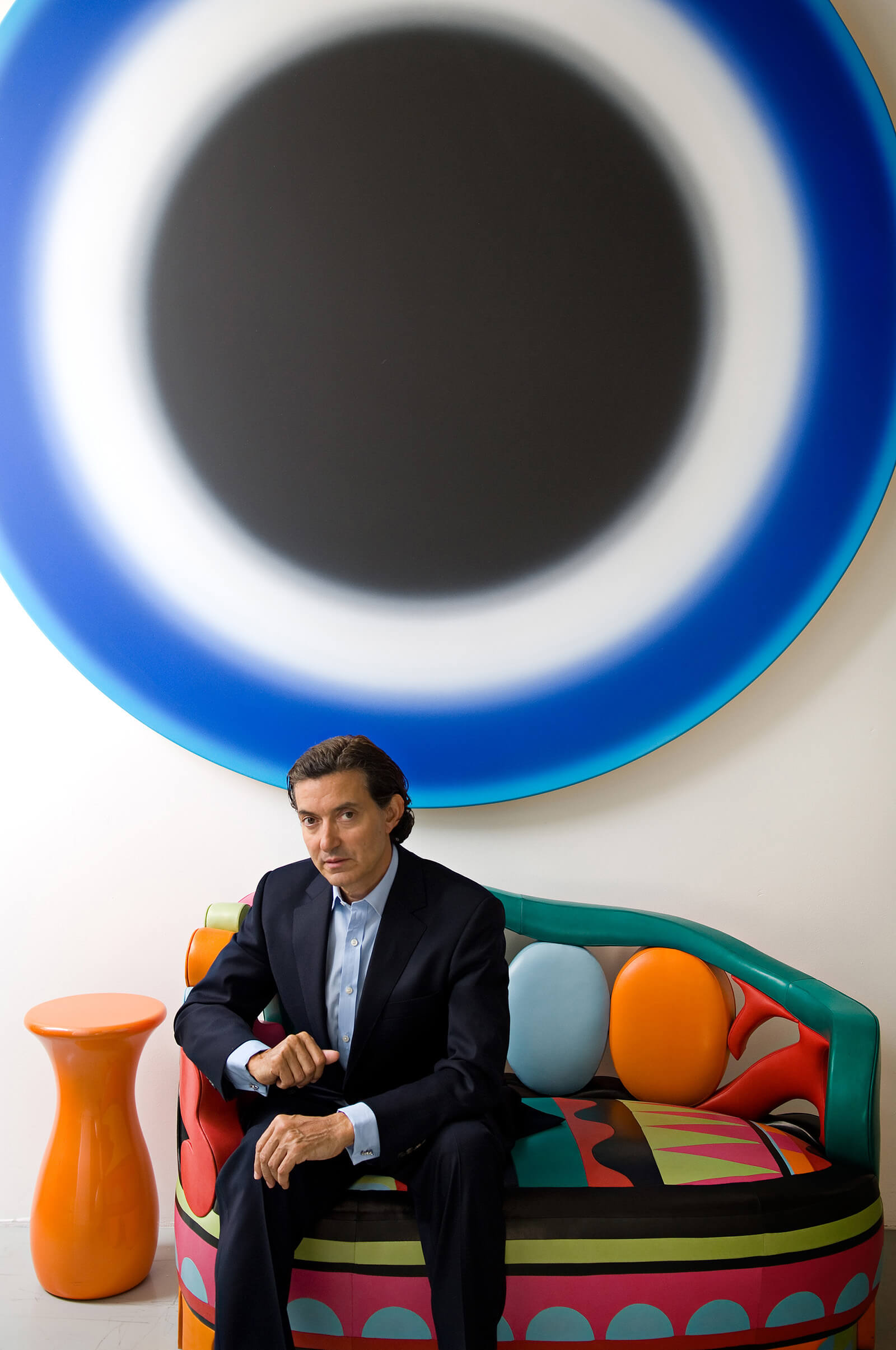 His first visitor was the influential interior designer David Mlinaric. “He stopped with a jolt outside the store and said ‘Where have you been?’” recalls Gill. Collectors and aesthetes, including Jacob Rothschild and Peter Palumbo, soon followed suit. And Gill, inspired by this support, decided to break rank even more freely. By 1988, he was showing provocative new pieces by Mattia Bonetti and Elisabeth Garouste – design darlings of the Paris fashion world – that included a chair fringed with raffia like a Zulu skirt, and another with skinny trident-topped frame slung with an animal skin. “This was work that had something to say,” says Gill now. “It was critical about art history and French colonisation.” In 1989, he set up David Gill Editions, formalising his role as the producer of this new genre of unique and editioned works that frequently teetered on the brink of art and design, something he has continued to develop over the years. He looks, he says, “for a strong signature, one that transcends the moment.” 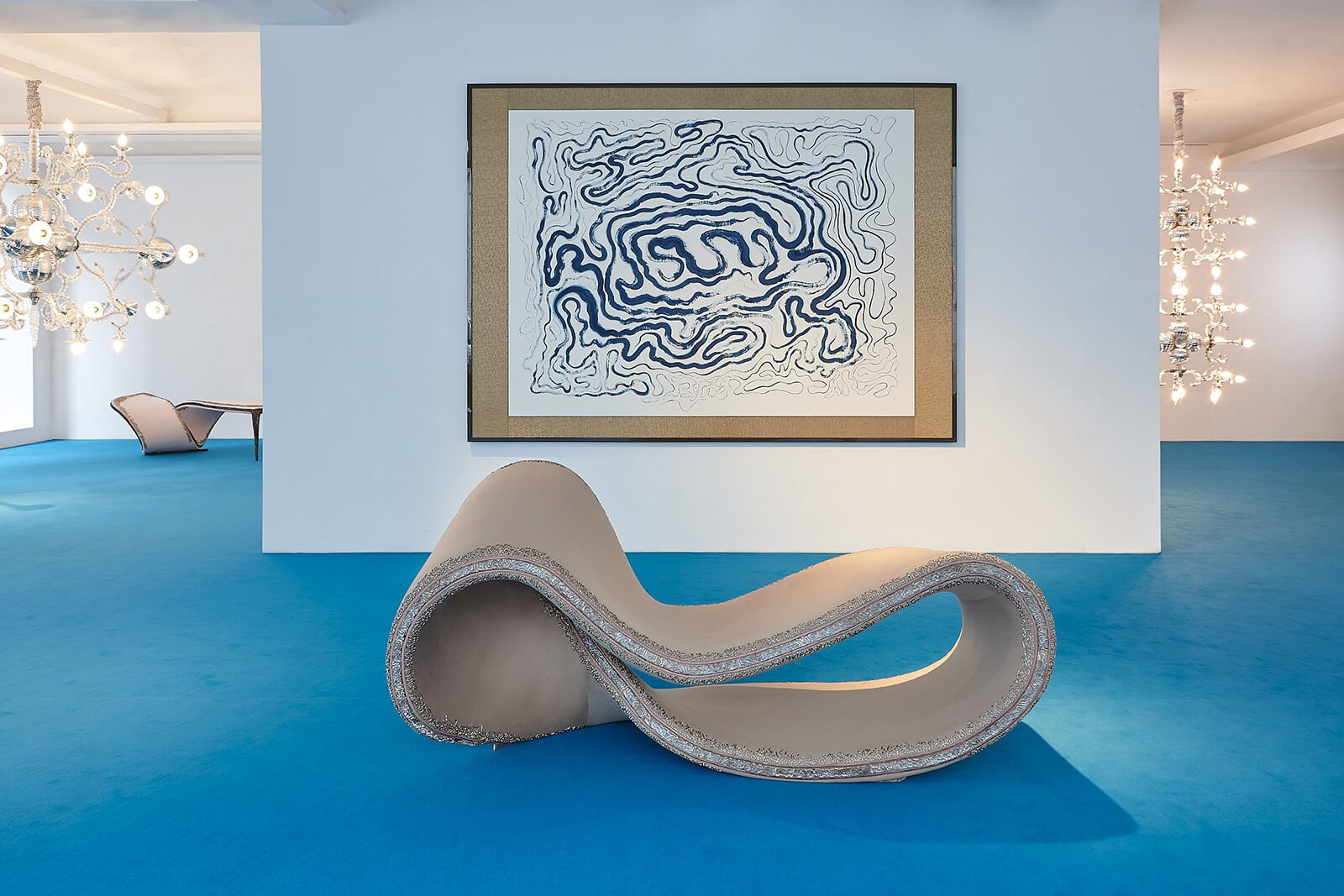 Most recently he’s found it in the work of Sebastian Brajkovic, a Dutch designer who is known for conflating the tropes of historical furniture with the visible influence of the computer. An exhibition of new work opened at Gill’s gallery in September. “The pieces are a real development,” says the 44-year old Brajkovic, who divides his time between Amsterdam and Zurich. “Previously, I took classical furniture typologies and then used the idea of extrusion, which for me is typical of the computer. I wanted to juxtapose the new digital world with the old. But for this show, I’ve drawn everything by hand, I wanted a kind of purity, and the soul of the human touch.” The result is hand-embellished and highly crafted pieces in bronze and upholstery, with a strong sculptural and sinuous presence. 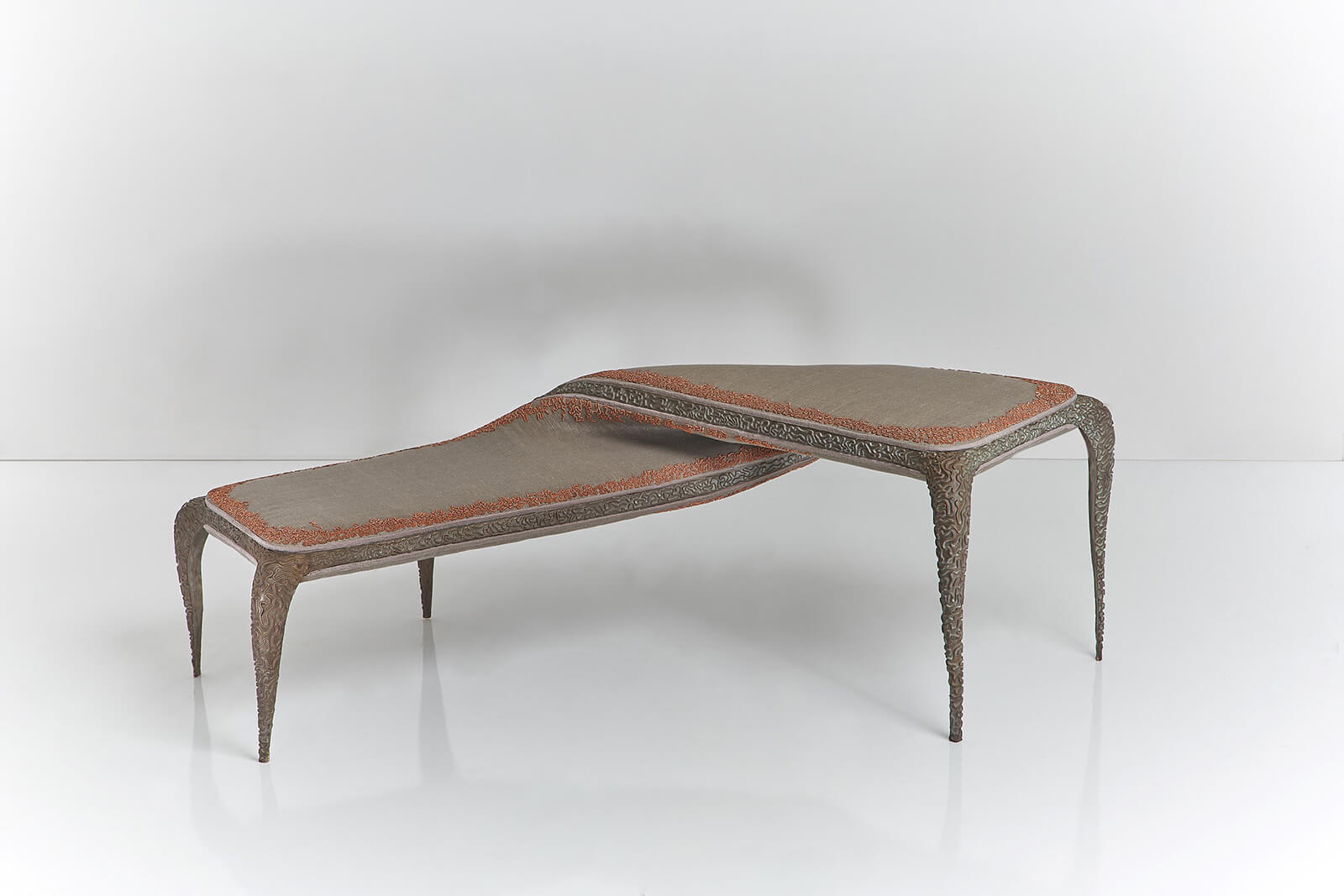 THE DAVID GILL Gallery now sits on the corner of two smart streets in St James’s, a site it’s occupied since 2012, and one it took over six years to find. In the intervening period, its owner has continued to work closely with Mattia Bonetti, whose decorative and sometimes surreal work has included cabinets that look like extravagantly wrapped presents and a lamp exploding with gilded feathers. 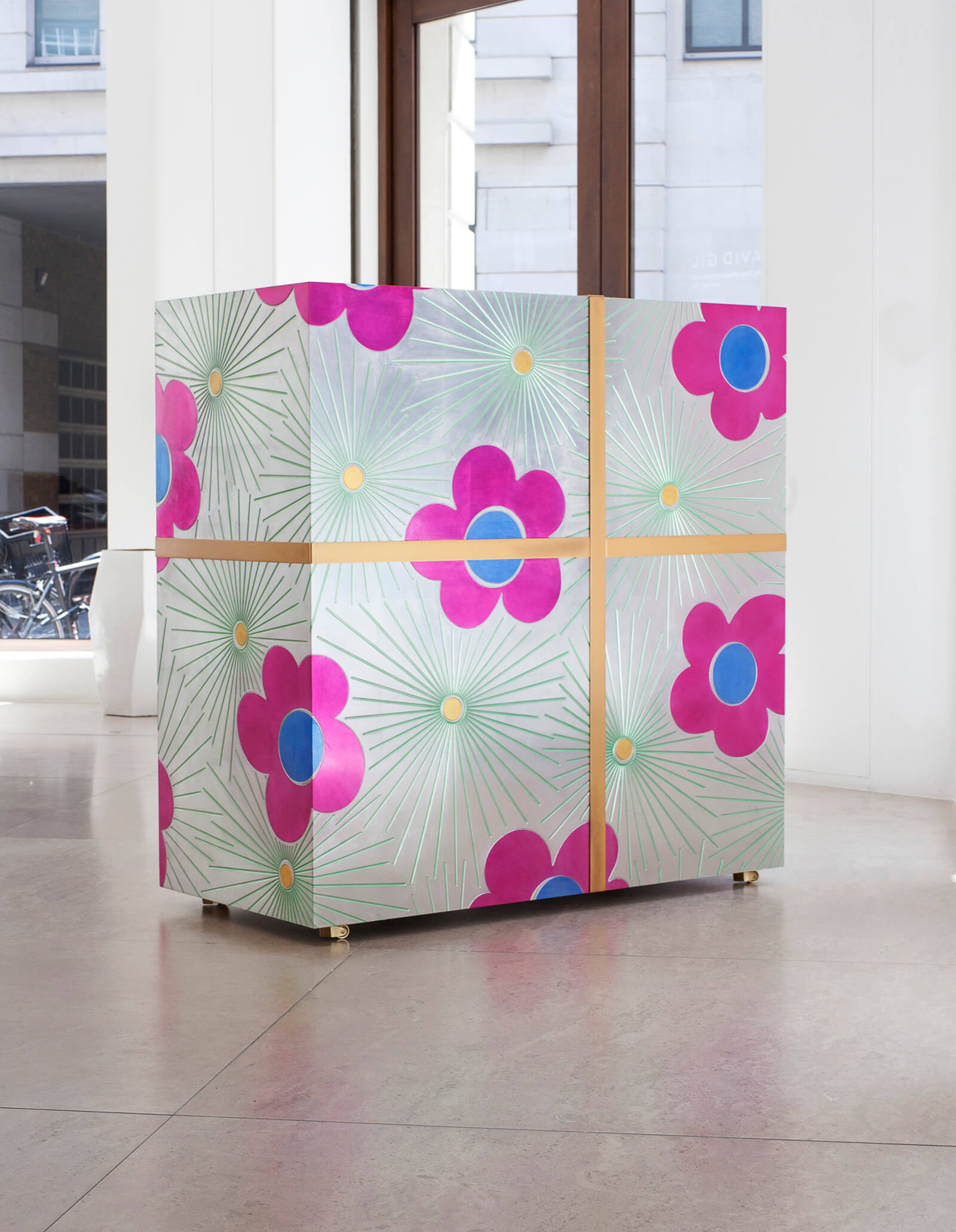 “I look for a strong signature, one that transcends the moment” 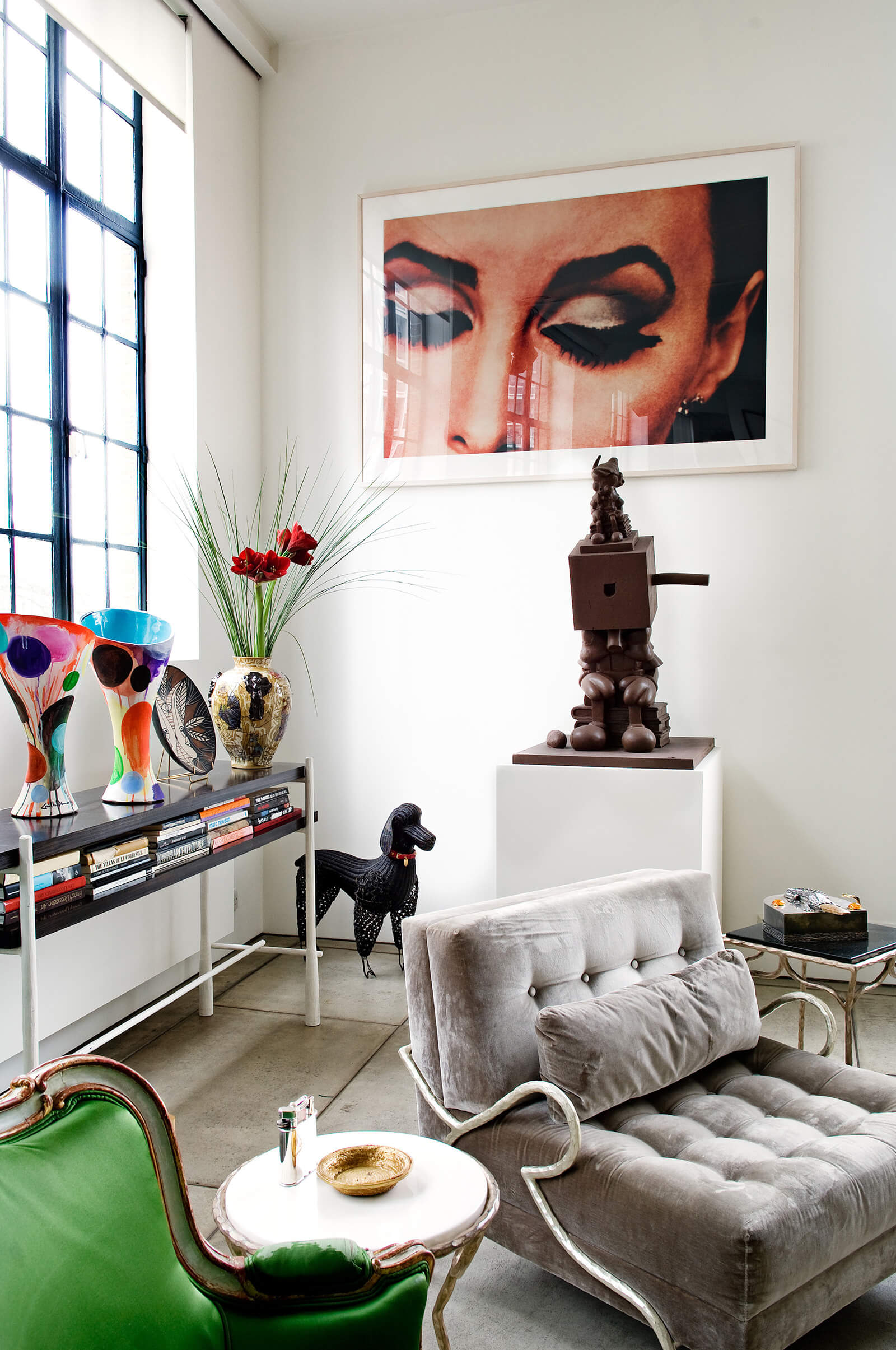 Another uniquely productive and ambitious relationship was with Zaha Hadid, whom he worked with until her death in 2013. One project, ‘Dune Formations’ (made in 2006 and shown in Venice and Miami), was a vast installation composed of over 40 pieces. 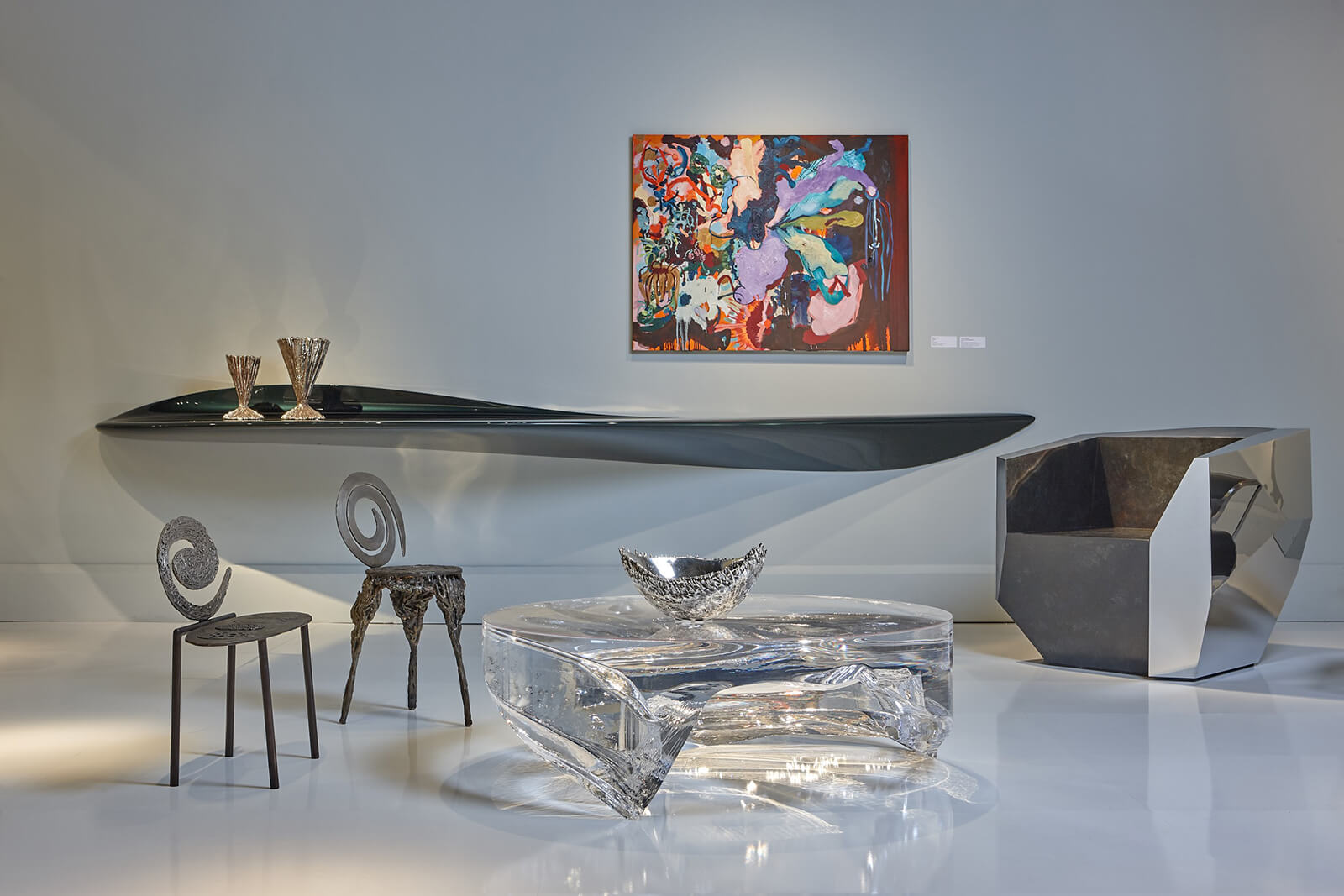 Another, the 2013 ‘Liquid Glacial’ table, was an almost-impossible-to-deliver concept in flawless acrylic. The pair would tease out these ideas over their frequent Sunday lunches at the River Café. 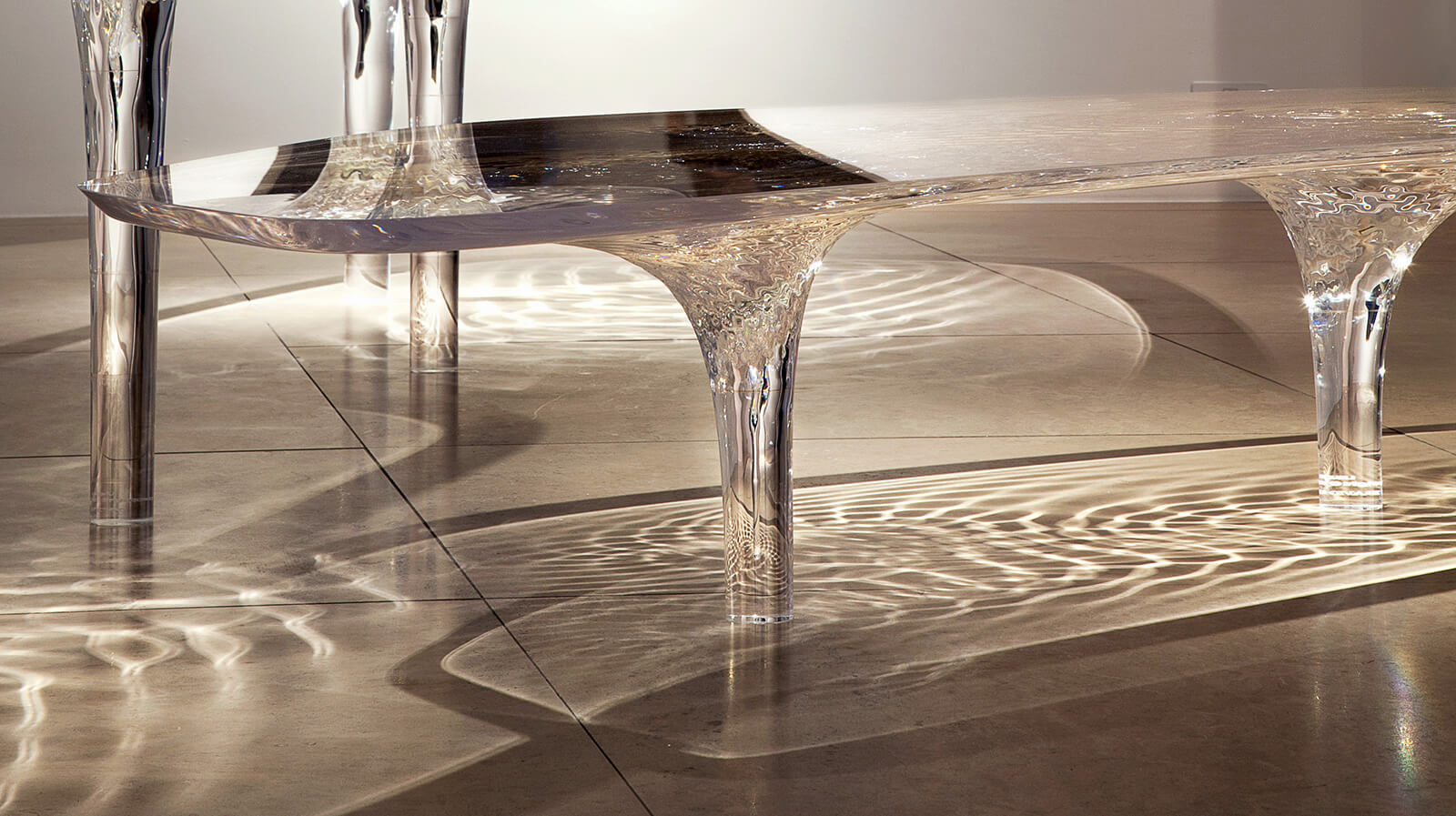 David Chipperfield, Gaetano Pesce and Michele Oka Doner are among other seasoned designers who’ve found a home with Gill, while it’s fair to say that he has played a large part in forming the careers of a range of artists including Barnaby Barford and Fredrikson Stallard. (His was also the first London gallery to show Grayson Perry’s vases in the 80s.) 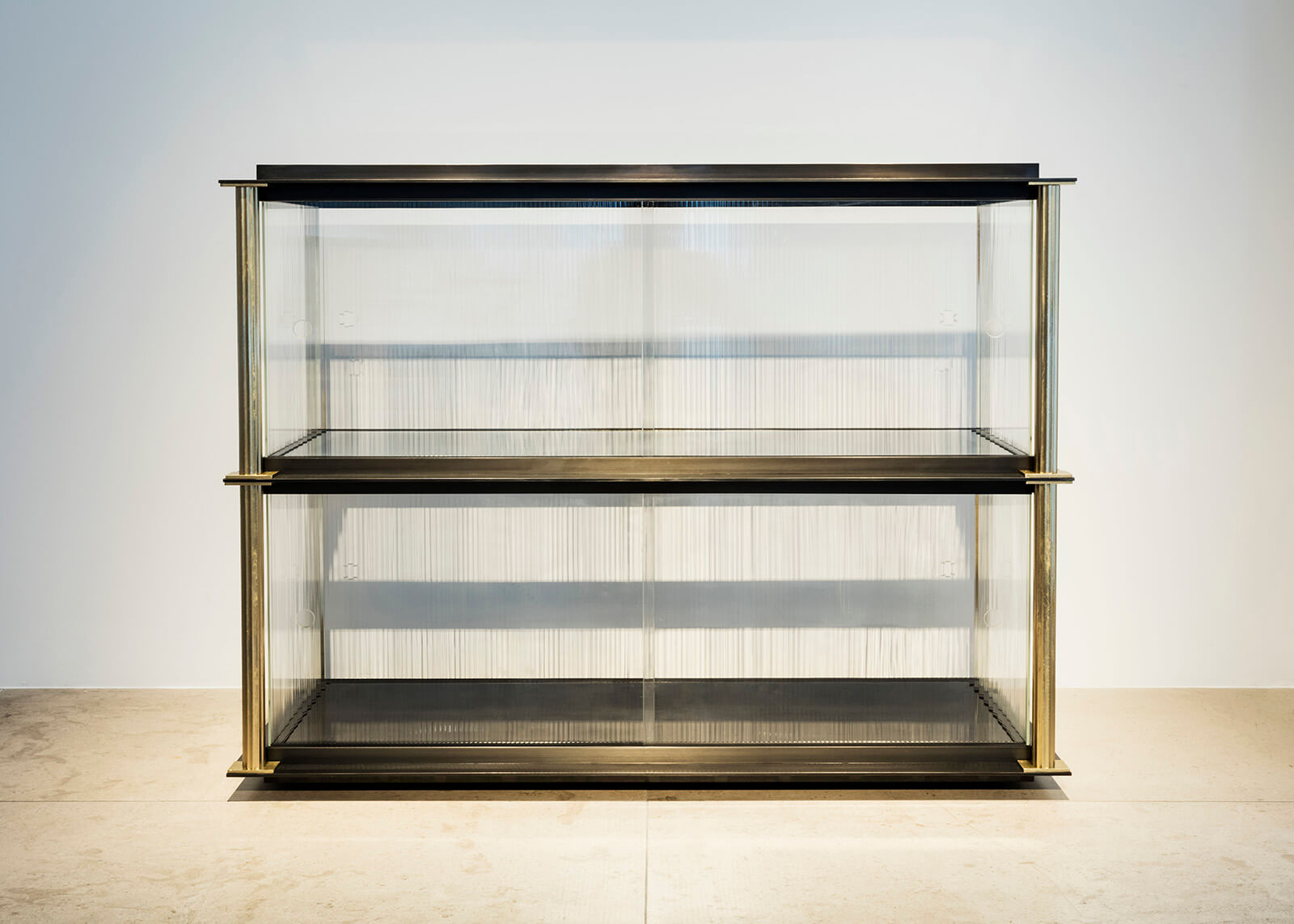 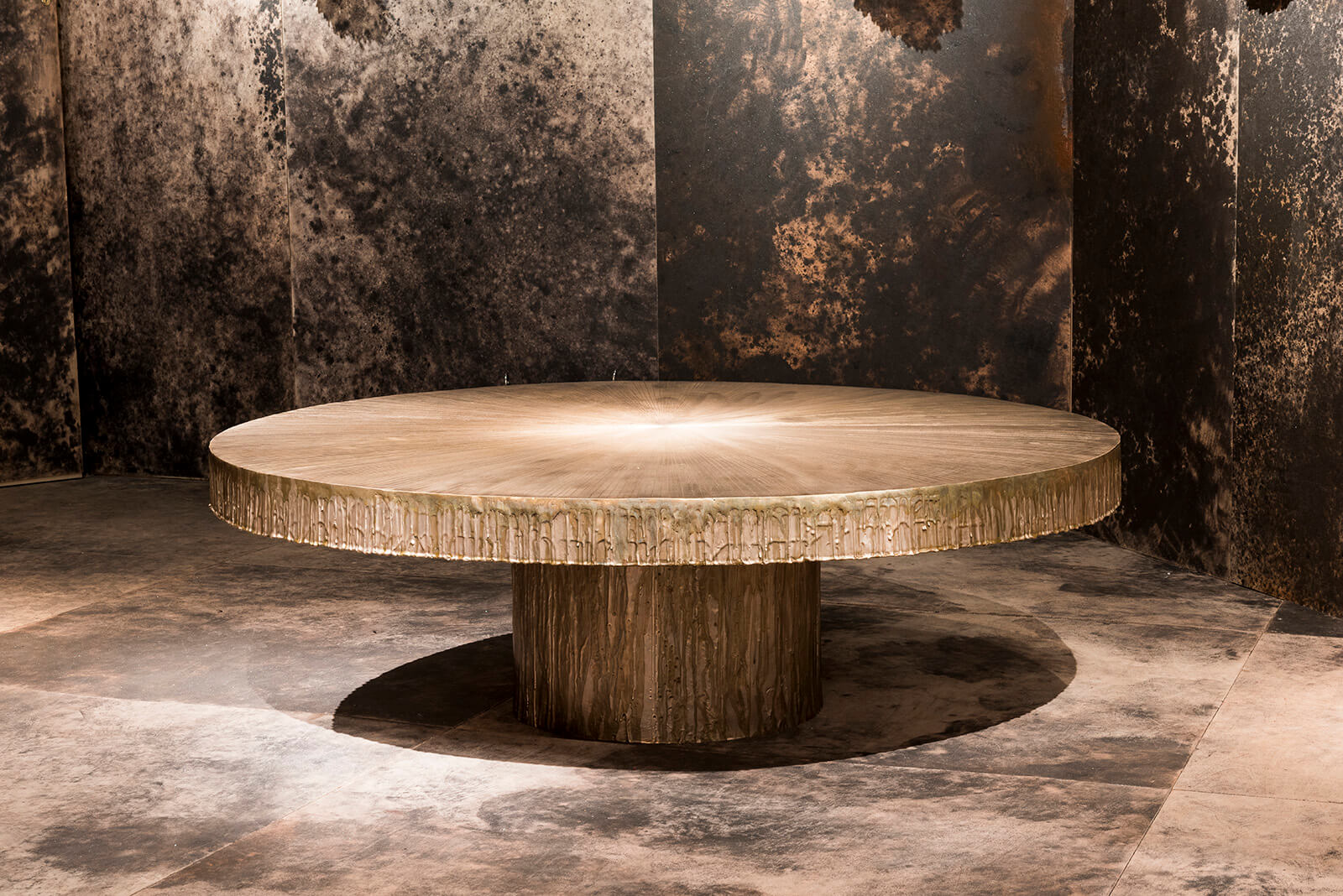 “He advises and encourages – and warns – but he never dictates or forbids,” says Ian Stallard, half of the duo with Patrik Fredrikson. Their first show with the gallery was in 2006. “He suggested we use colour – we’d always been very black and white – so we went for the extreme: shocking pink,” they recall. The resulting polished stainless steel and polyurethane chairs went straight from the gallery to the Design Museum’s outdoor Tank, which sat by the River Thames outside its building. “At moments like that, you know you’re playing a valuable part in the development of design and aesthetics, when something travels from our fairly niche world into the very public realm of a huge vitrine on the Thames,” says Gill. 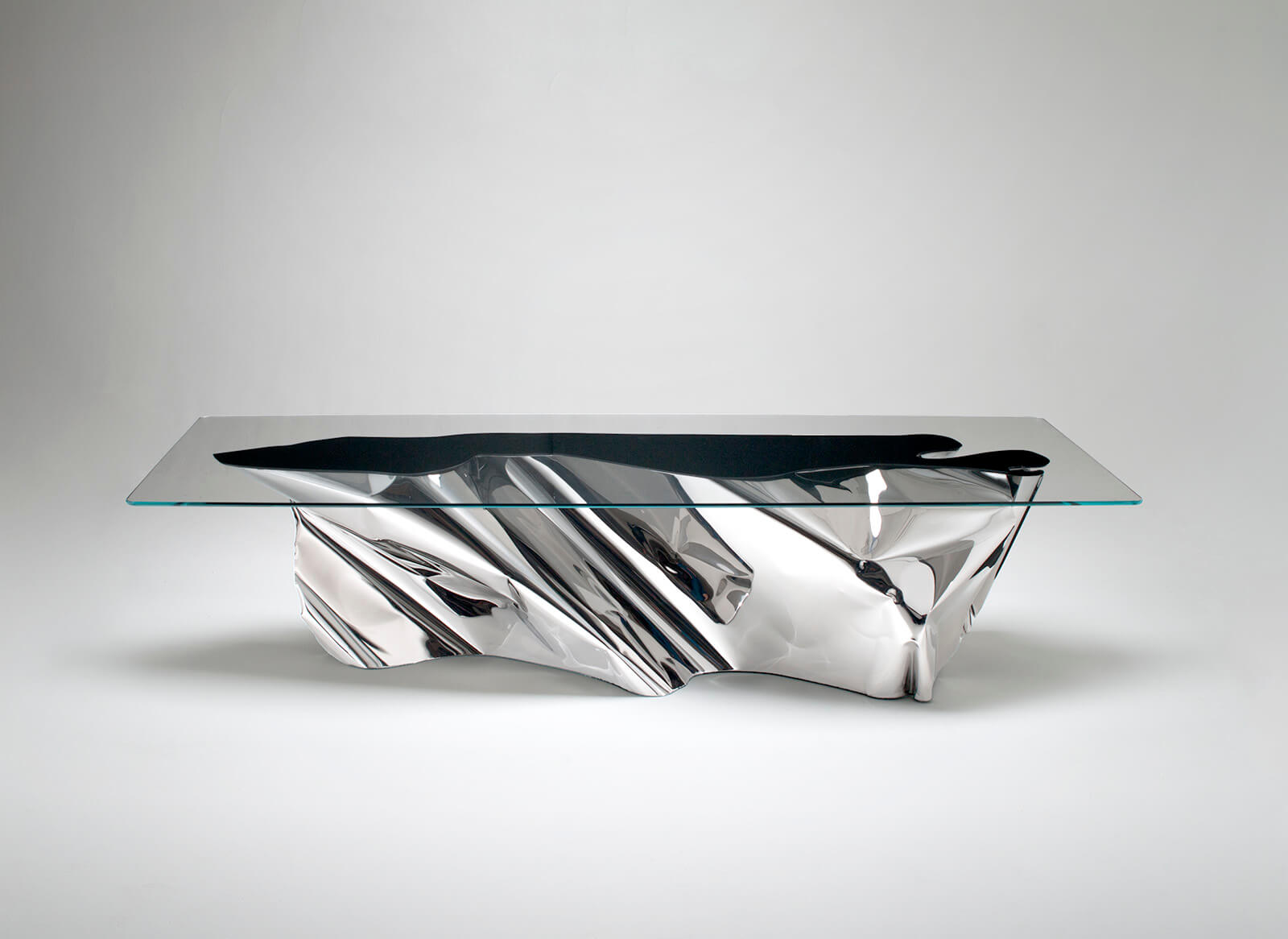 Barnaby Barford has been working with Gill since 2005, first showing at Fulham Road, which Gill kept on, while moving the main business to a large former handbag factory in Vauxhall (on Loughborough Street), in 1999. “Francis was instrumental in showing my work,” says Barford who at the time was creating critical tableaux of society’s foibles with found figurines. He is referring to Gill’s life and work partner, Francis Sultana. “But what David is so good at is rooting out what’s already there. A conversation with him will bring a kind of clarity and refocusing to my thought processes … it will take me to a point where I suddenly know exactly what I want to do. It’s a fascinating process.” 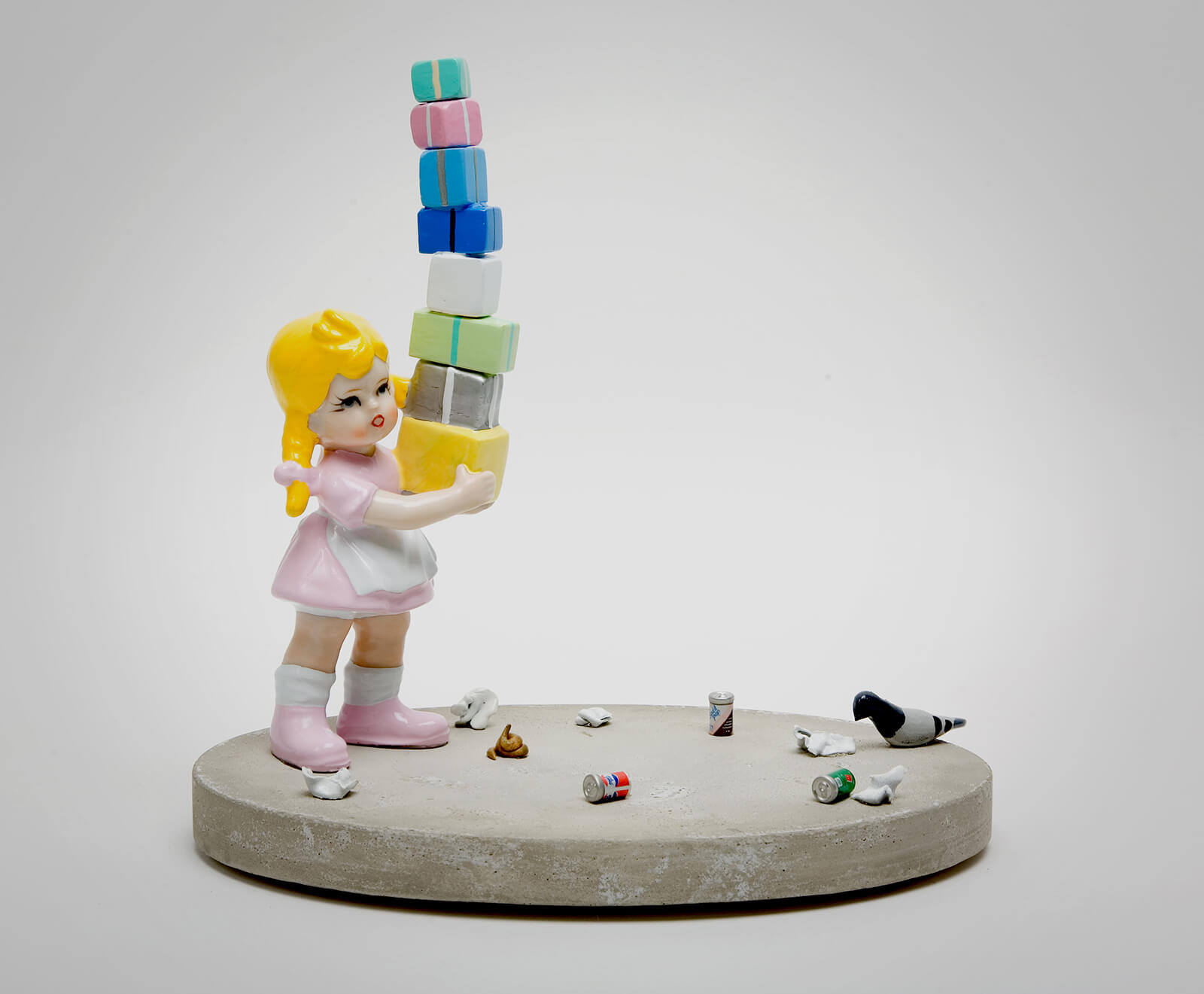 At Vauxhall, the vast gallery space on the ground floor meant Gill could continually show both contemporary and twentieth century design pieces side by side. There would be Charlotte Perriand book cases and Donald Judd tables and chairs alongside elaborate candelabra by Oriel Harwood and Fredrikson Stallard’s ‘Pyrenees’ sofa (hand-sculpted from upholstery foam and flocked in colours, from solid black to that dazzling neon pink). 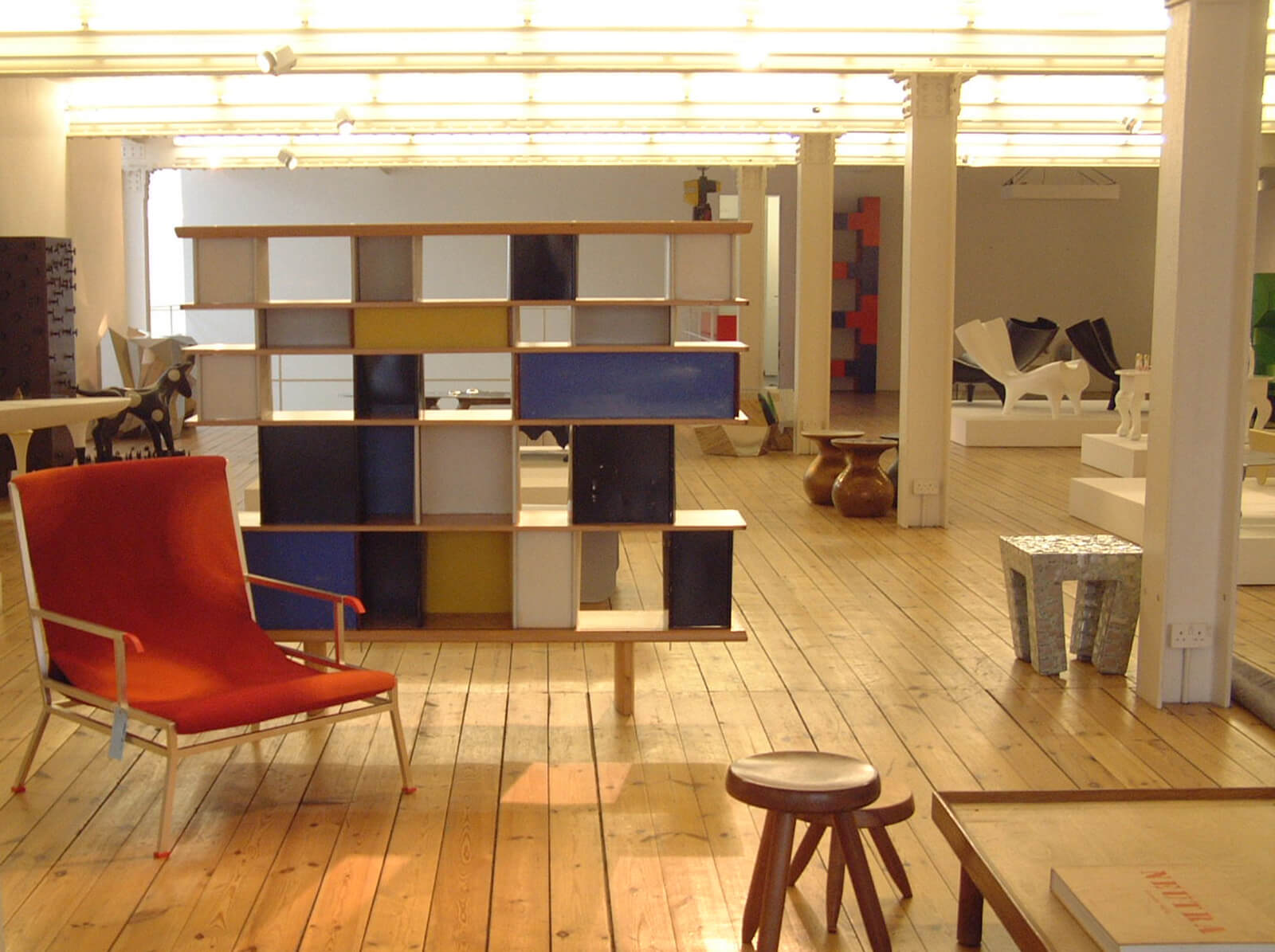 Gill was able to work with designers here in groundbreaking ways: in 2003, allowing Jaime Hayon to cover every wall with freehand drawings as a context for totemic cactuses and supersonic pigs made in ceramic. The trippy exhibition was called ‘Mediterranean Digital Baroque’. 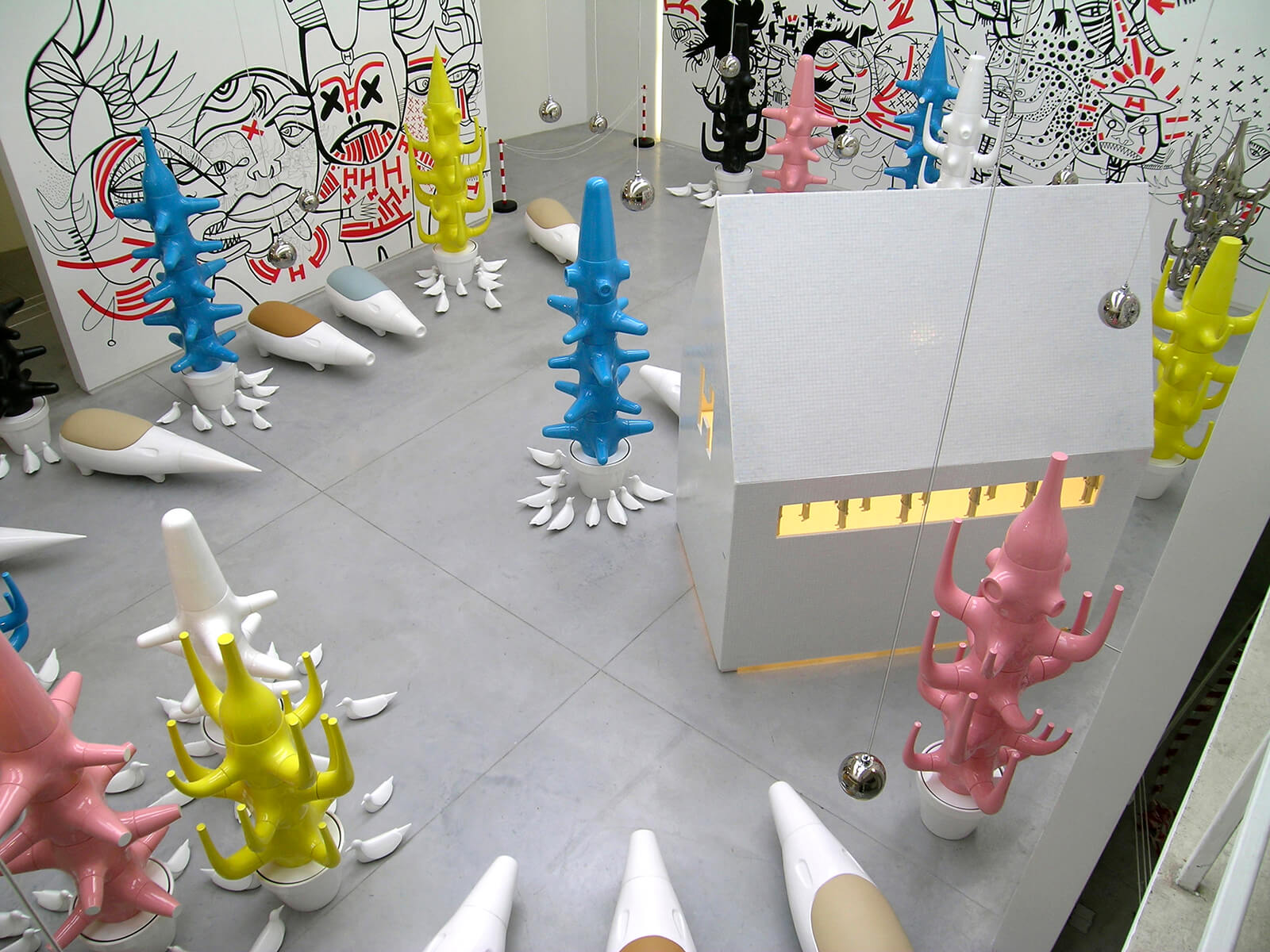 Upstairs, Gill’s apartment was filled with art and design – Cocteau plates, Franz West sculptures, Ugo Rondinone black and white landscapes, Grillo Demo vases – while in an additional upper floor gallery, a monumental artwork by Paul McCarthy, whom David Gill admired from early in his career, was installed involving trains and tracks and copulating cowboys. In fact, it was Gill who had spotted endless drawings in McCarthy’s studio when he visited the artist in LA, and asked to buy them: they are now considered to be a major part of the artist’s oeuvre. 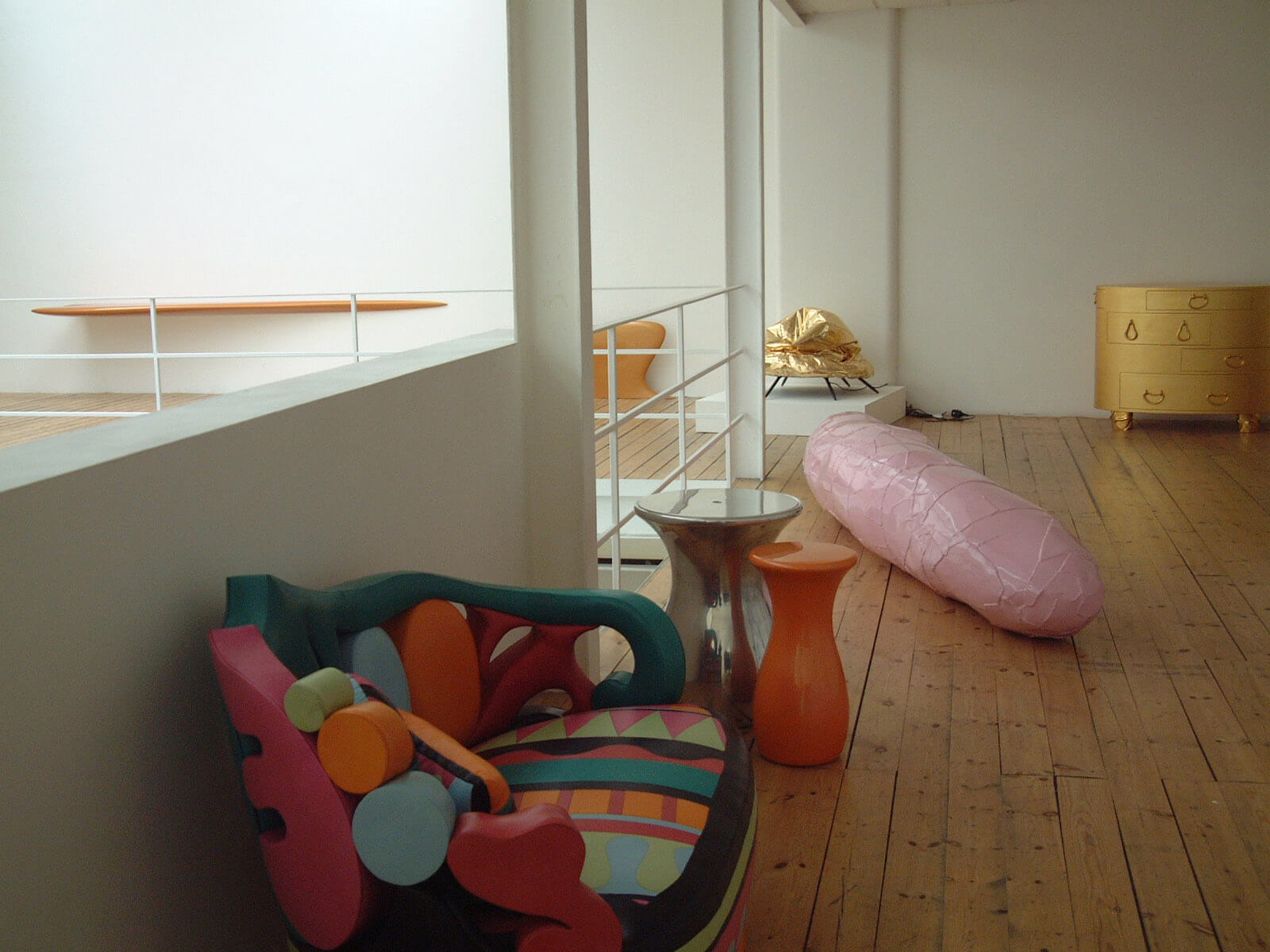 GILL AND SULTANA now live in Albany in one of the 18th century building’s finest apartments, or sets as they are called. The art collection has grown, and they live surrounded by a lavish mix of artworks that include Richard Prince photographs, and paintings by Kusama and Christopher Wool. As you can imagine, much of the furniture is the limited-edition work that Gill has produced over the years. “It’s the work of designers who give meaning to materials,” muses Gill. “Inventive and intriguing, but largely immutable. One came to me once, wanting to make a piece in felt and paper. I had to say ‘No’. In that respect, this isn’t art, but something that might be used.” 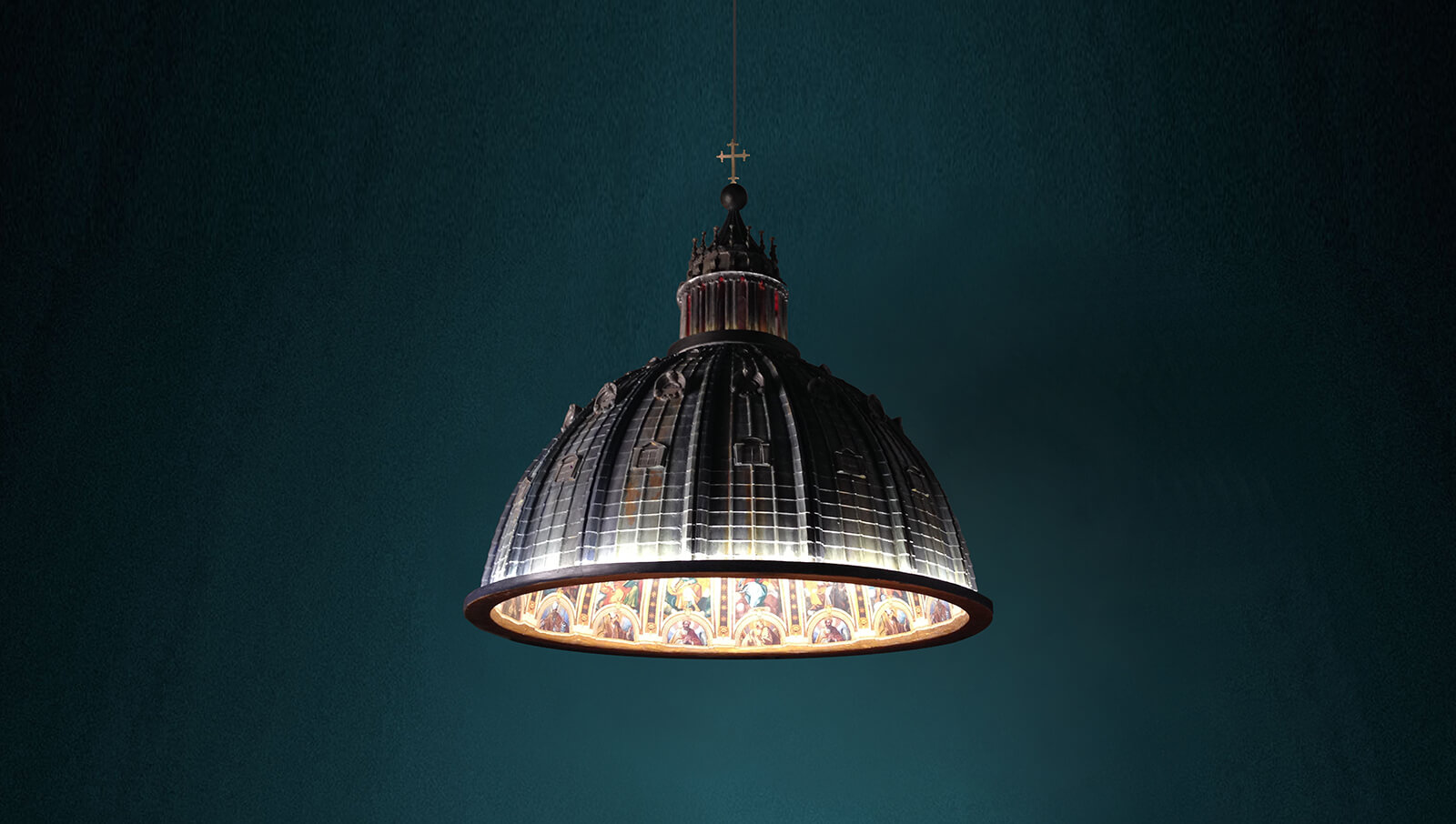 Nowadays, of course, David Gill is far from alone in his championing of new limited-edition design. “But it was great being out there on my own at the beginning,” he smiles proudly. After all, there wasn’t much of a market for contemporary art in 80s London, let alone objets and furniture. “But now, the wealth has really grown, and a corresponding awareness of art and design, and a desire to live with things that have status and integrity,” he says. Plenty of other, younger and equally ambitious galleries have joined the fray, and that’s no bad thing. You could call it critical mass. But among them, Gill will always stand alone as the godfather of London’s limited-edition world. 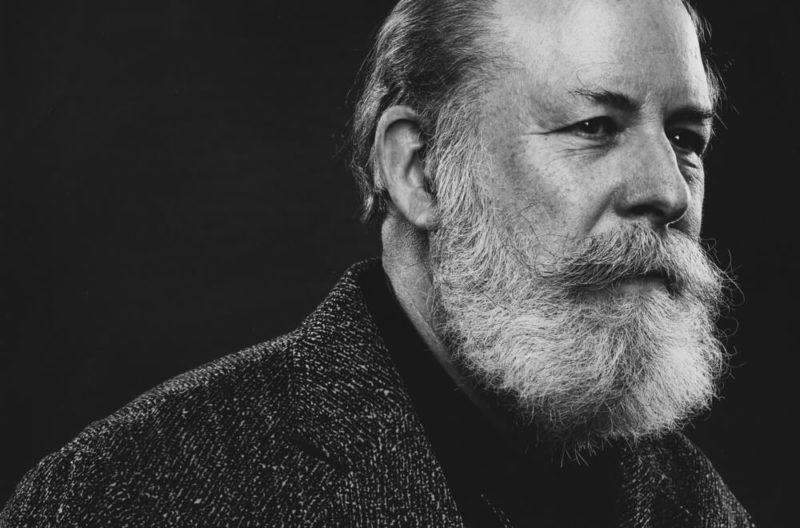 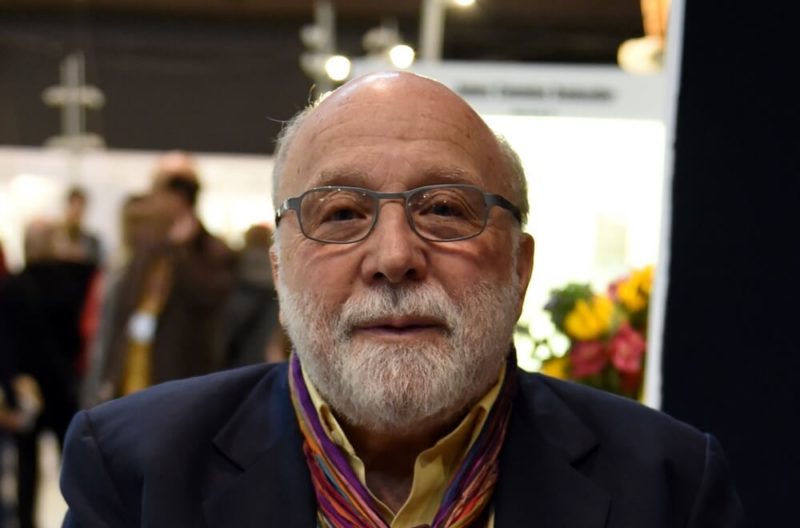