JAMESPLUMB WAS FOUNDED in 2009 by the artists Hannah Plumb and James Russell. They had begun working together at art school, a collaboration that gradually segued into a professional partnership. As sculptors – who also work in interior design – their designed objects and environments are highly theatrical and poetic, inspired by their very different but complementary feelings about materials and processes. They share a love for found objects, the meticulously hand-made, the imperfect and the time-worn.

A statement on their website beautifully encapsulates their approach: “We are artists who conceive, create, and direct work across a wide range of industries and disciplines, but we are less worried about how to define our work, than with what it adds to the sensation of the world around us.” Their aesthetic is on public display in the two Aesop stores in London, as well as in galleries and art fairs internationally. Their latest exhibition,  ‘(OF) BATH, MMXXII’, is with Rich Stapleton at Francis Gallery, in Bath, until 10th September 2022. 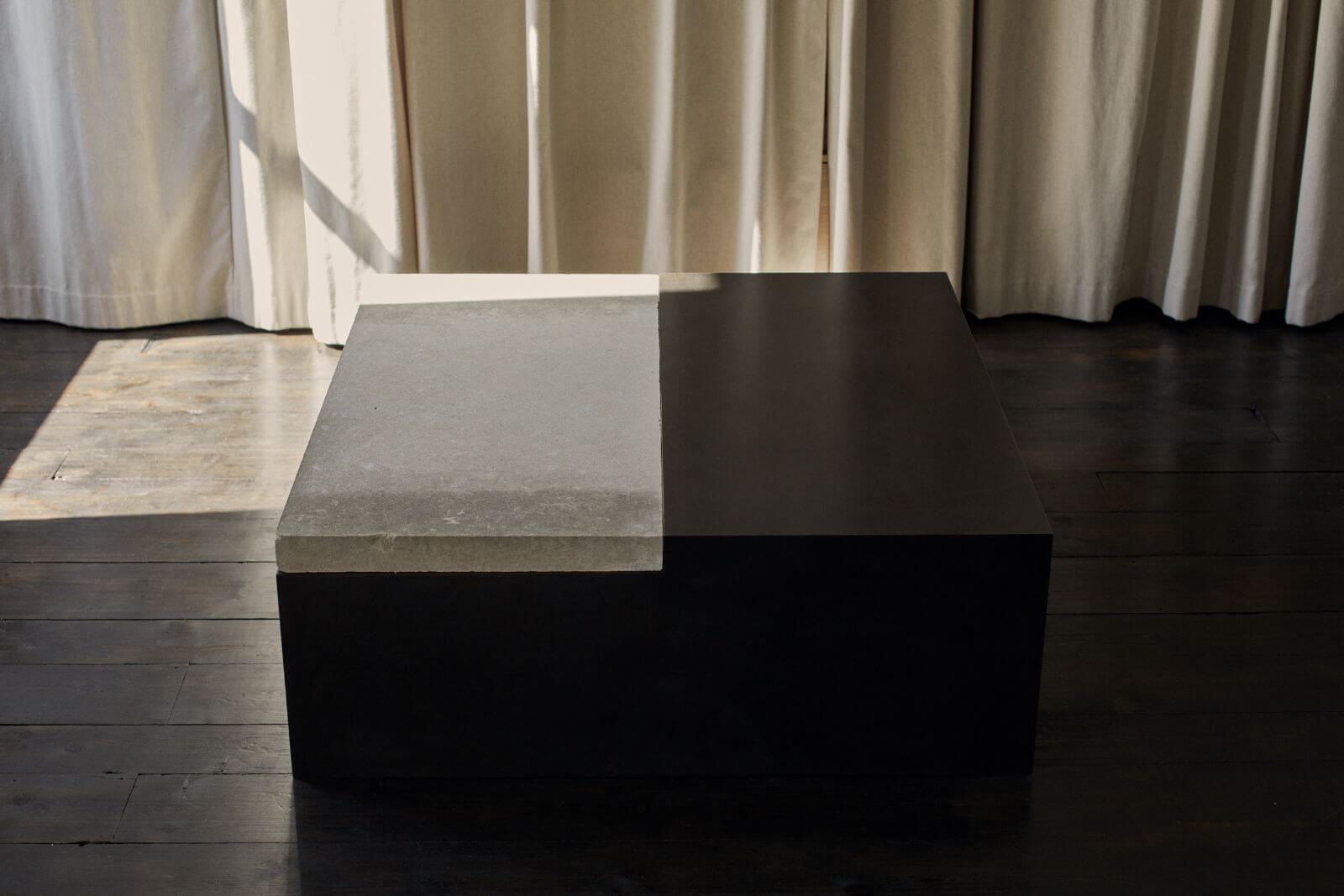 The Design Edit (TDE): How did you meet?
James Russell: We met at Wimbledon School of Art, getting on twenty years ago, on the Foundation course. Then we both went on to study Fine Art Sculpture at Wimbledon, graduating in 2003. Officially, we started to work as a team 13 years ago, which was when we had our first exhibition as JAMESPLUMB – our combined name.
Hannah Plumb: Before that James was a technician at an art school and I was working for an interior designer, so our work together was more part-time and informal and we didn’t have a name.
James Russell: And then we started on this journey together, initially through making lights …
Hannah Plumb: It was a journey through function.
James Russell: For a while, we were mainly known for making lights which felt a bit odd having studied Fine Art – at times we felt like frauds in the art world for embracing function. We were offered the opportunity to design a retail store and even though we hadn’t trained in interior design we enjoyed exploring all the elements that are normally excluded from the art world. Over the last ten years we’ve explored the territory in between design and art – artworks that function and furniture that doesn’t. 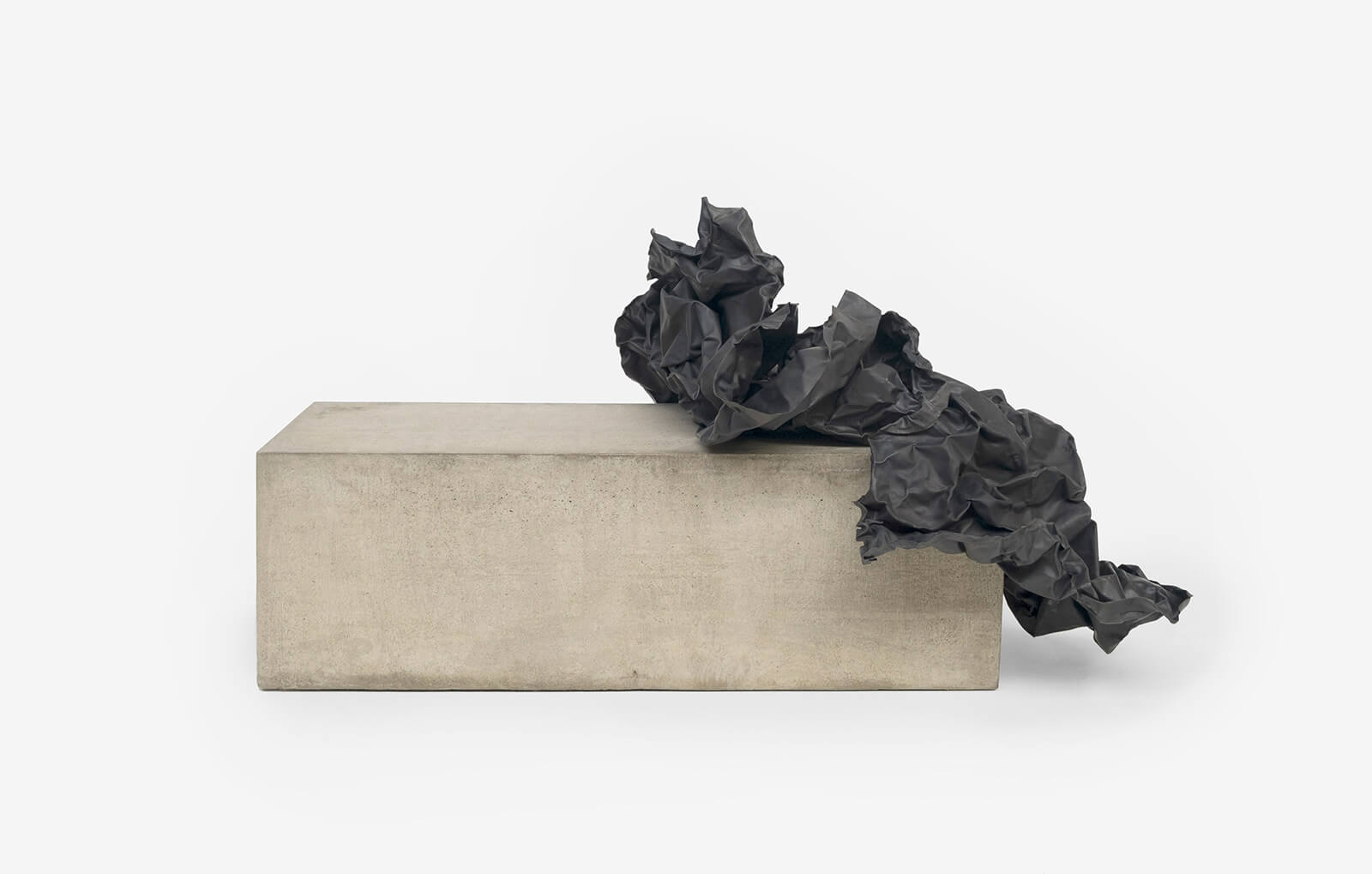 TDE: What drew you to work together?
Hannah Plumb: I guess we were quite aligned and at art school we were always helping each other make work. I was mould-making and poor James was always roped in.
James Russell: Even in a critical way, talking, and helping each other develop our work. For Hannah it was always about empathy with objects, seeing life in objects, often discarded or abandoned objects. And I had always been interested in light and shadow –  obsessed with James Turrell and other artists in that realm. Our work was apples and pears. But looking now at the combined work, both those things are still strongly there. 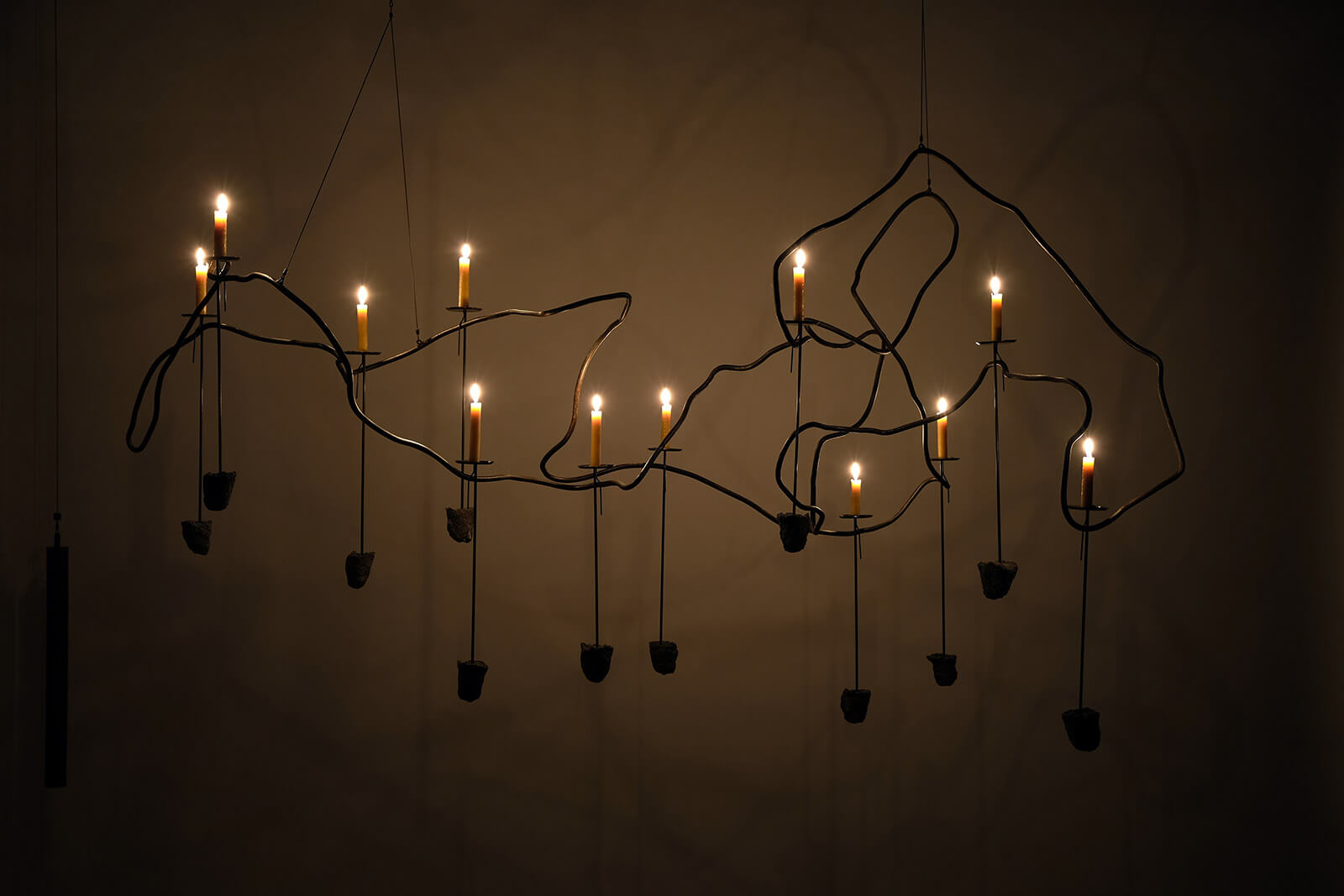 TDE: How has your combined creative output evolved?
Hannah Plumb: When we became JAMESPLUMB, that marked the moment when we said, “Right, we are really going to do this.”
James Russell: The first piece we made together was a little dog lamp called ‘Sampson’. It was a broken hobby horse who had lost two wheels and his head, so it was this little thing on wheels.
Hannah Plumb: A shell.
James Russell: And at the same car boot sale where we bought him (with Hannah saying, “Oh we can’t leave him!”), we bought some old pub swan lights, totally unrelated. We were just playing around when one of the pub lights became his head, and immediately the angle at which we could put his head dictated his mood. He could look up, literally lighting up the room, or slightly sombrely look down in a corner sulking – so the emotion and the light combined. He became quite popular and ever since we have been commissioned to make all kinds of one-off pieces – chandeliers, beds, seating – sometimes on the sculptural end, where it’s been barely functional, and then other times, very, very functional.
Hannah Plumb: We’ve been involved in shops, retail spaces and homes, but also temporary environments like set design and event design.
James Russell: It’s the excitement and opportunity of the brief that matters to us more than the industry label, but ultimately it’s the chance to create experiences of real depth and resonance for people. 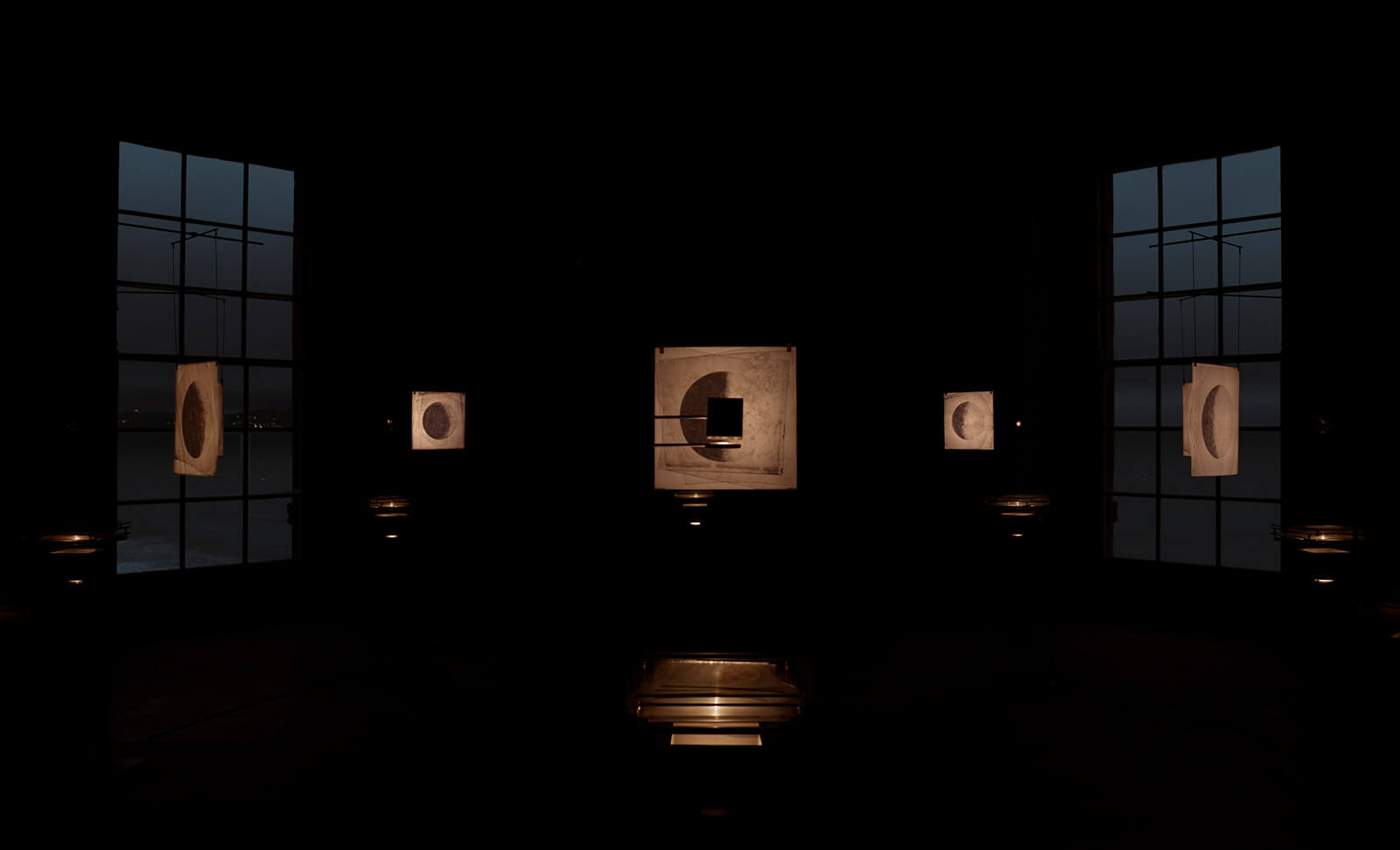 TDE: How do you work creatively? Do you split the work, do your skills overlap and complement, or are you polar opposites?
Hannah Plumb: I’m probably more flighty and James is a bit more grounded, but overall it balances.
James Russell: There is a lot of overlapping, but for sure Hannah is maybe a bit more impulsive and I am definitely the procrastinator. But it often goes back and forwards – even with skills.
Hannah Plumb: We have quite a broad understanding at an intermediate level of so many different processes. We make as much as we can ourselves and with our team in the workshop.
James Russell: We love to be connected to the materials and processes ourselves and in the accidents and the mistakes you find gems. Whereas if you had just handed a drawing over to a fabricator, you would miss that opportunity to say “Oh no, that’s really beautiful and interesting”.

TDE: What is the story behind your latest exhibition, a two-person show with photographer Rich Stapleton at Rosa Parks’s gallery in Bath?
James Russell: Rosa’s brief was to respond to the city of Bath in some way. We had done a project for Aesop in London using Bath stone and had so enjoyed visiting the quarries and stone yards, so we knew we wanted to use stone. The day we went to the stone yards, we met Rich, who showed us an early edit of the photos he had taken. Some were taken with his grandfather’s camera, which had some defect, the light seal was a bit warped, which made a few of the images more abstractly beautiful. As we were exploring the stone yards, we discovered some neglected blocks of stone with similar accidental abstract compositions on the surface from lichen, or exposure or sunlight. And then there was another batch of stone which had come from a demolished house, which still had layers of lime wash and gloss paint, and markings from architectural fixtures. 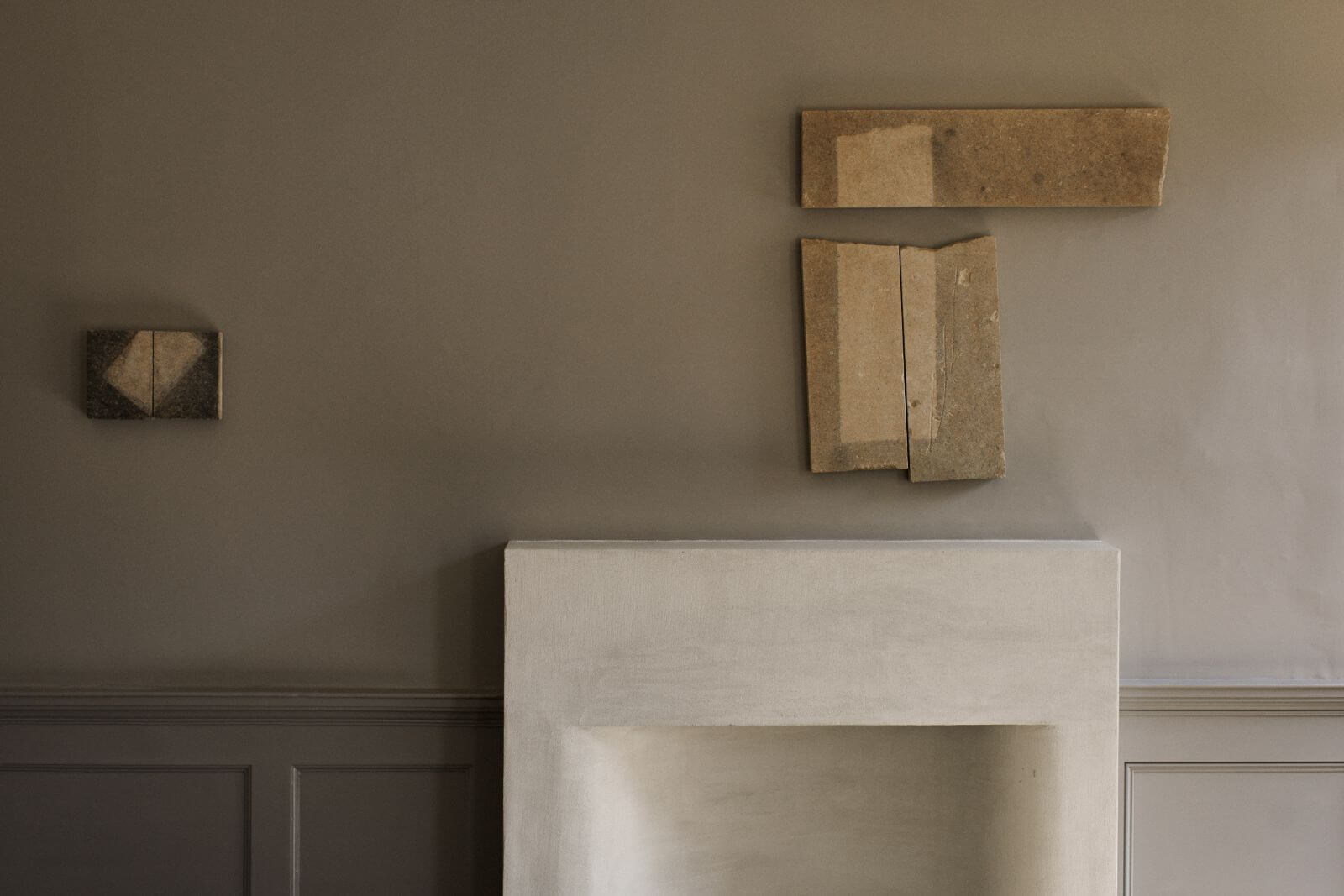 Hannah Plumb: Our brief had been to create sculpture, but we came back from the stone yard inspired by the idea of wall-hung pieces. The faces of these blocks were like found works by Ben Nicholson, Barnett Newman or Henry Fox Talbot.
James Russell: The first challenge was to persuade the stone yard to treat these pieces as precious. Our work is all about drawing attention to neglected things.
Hannah Plumb: Then there was hours and hours of editing, figuring out our own response to the material, an intuitive process.
James Russell: There was jeopardy here because we had to split the stone, and that uses water, so we did not know what we would lose. We have created two distinct types of work, including some floor pieces. Fortunately, Rosa loved the granular, grainy, photographic feel of the whole, alongside Rich’s photographs. 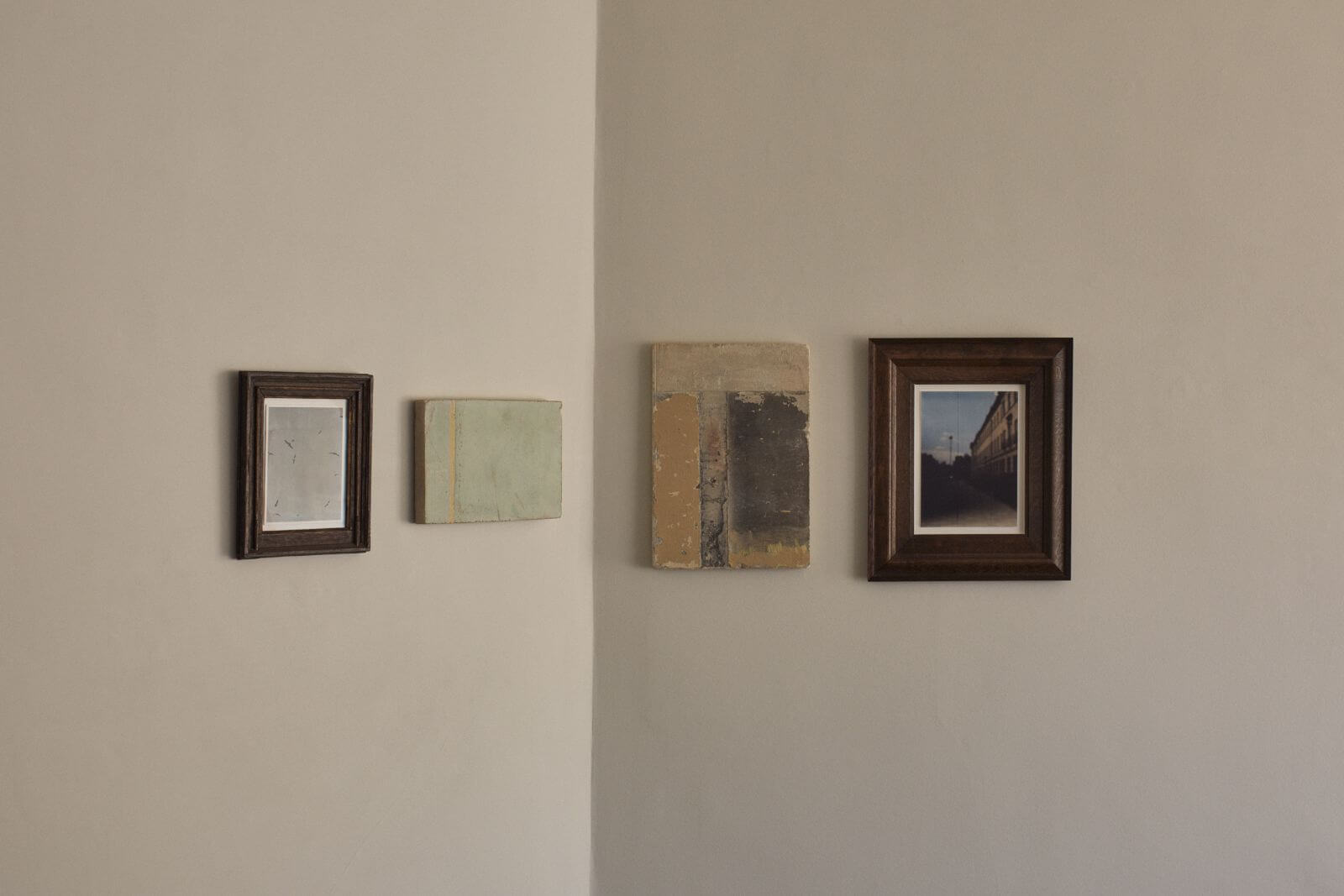 TDE: So what you up to this summer?
James Russell: We are moving to the far west of Shropshire, to a derelict farm in a remote location. One of the first things we got was satellite internet as there’s no mobile signal. Now we’re busy packing up our rebar to take with us. All a lot to juggle, especially with a 17 month-year-old! 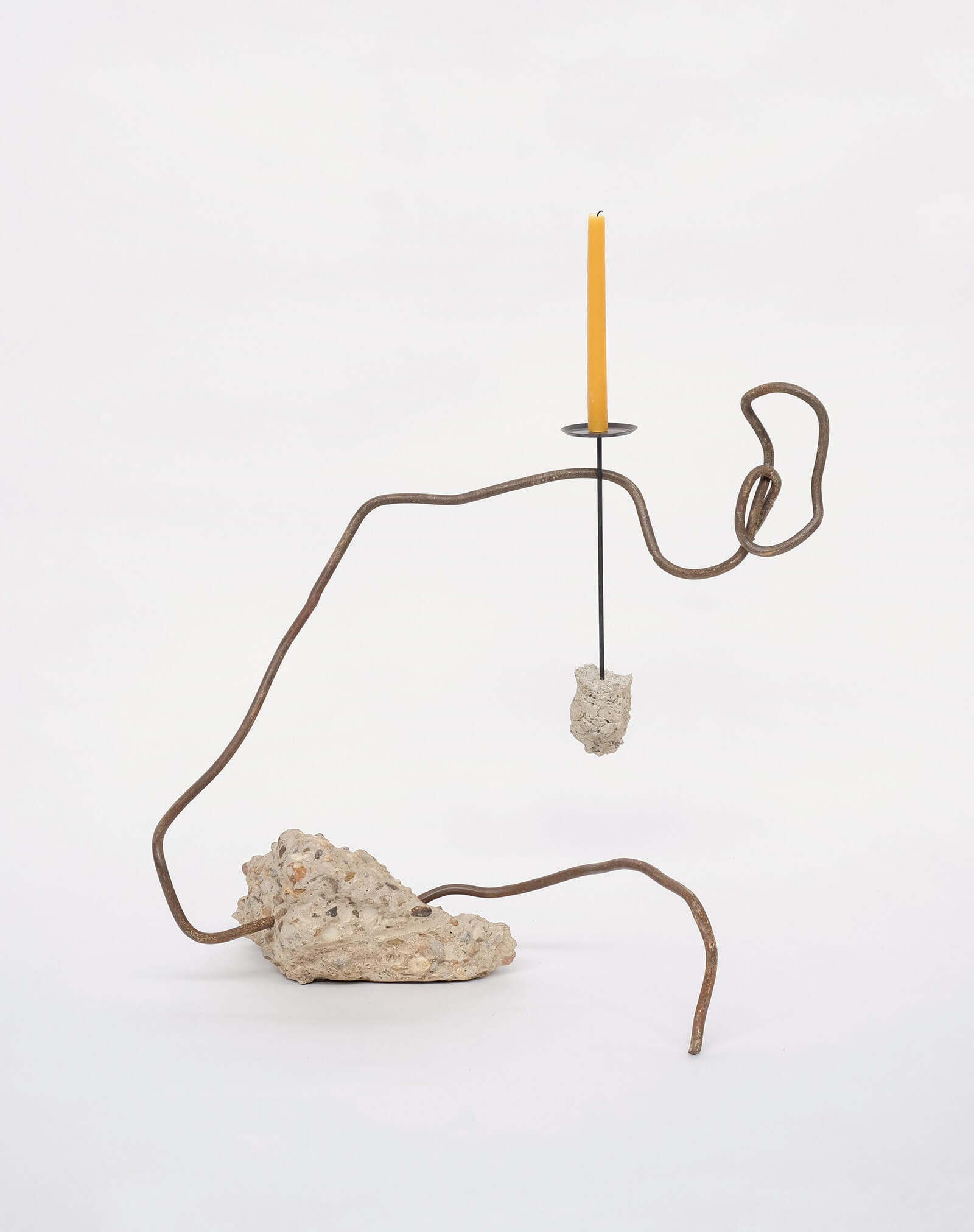 This is a revised version of an article that originally appeared in The Design Edit in 2020. 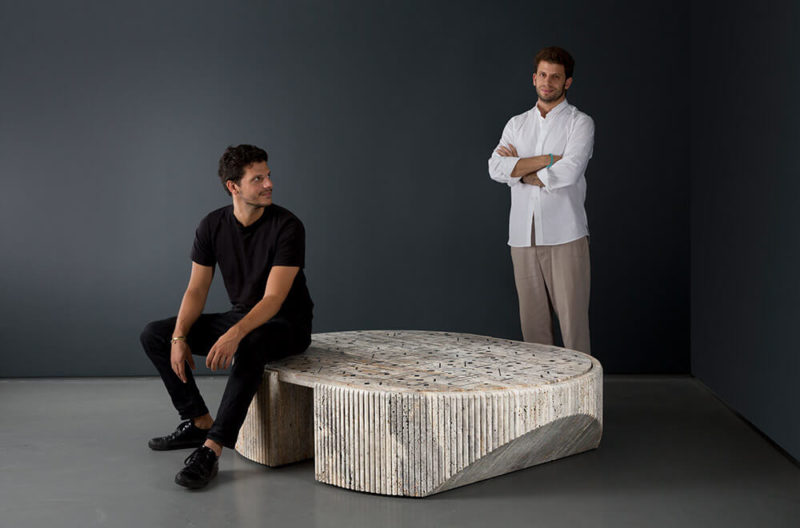 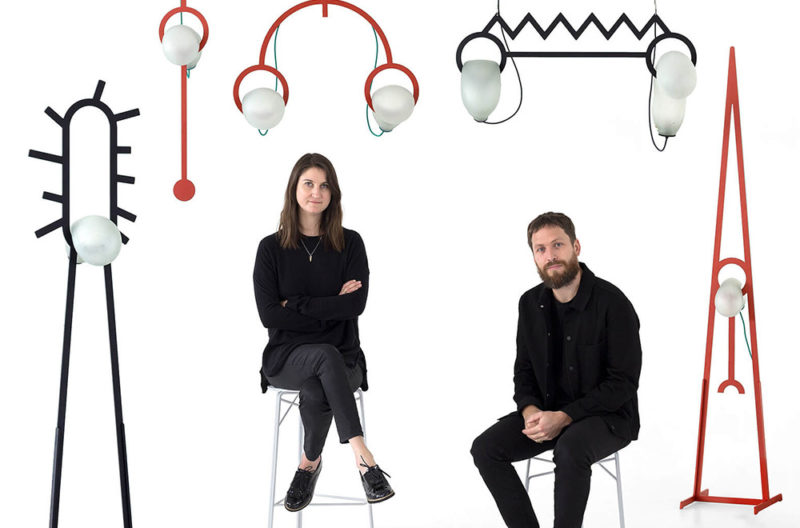 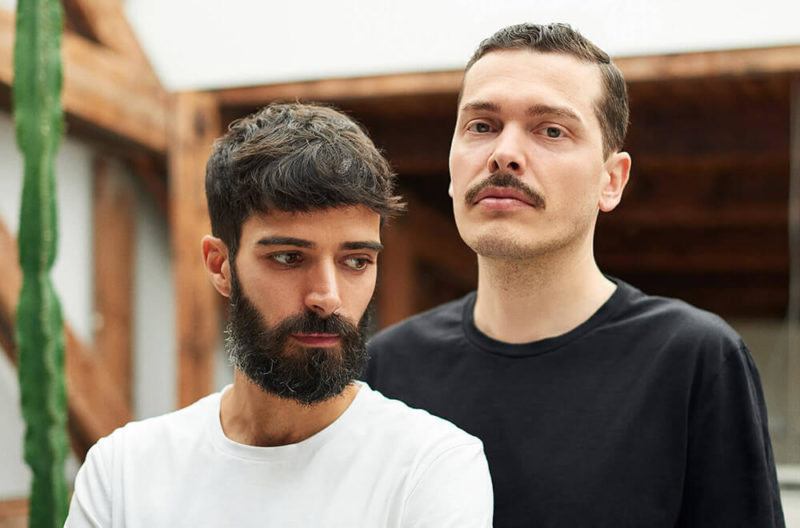