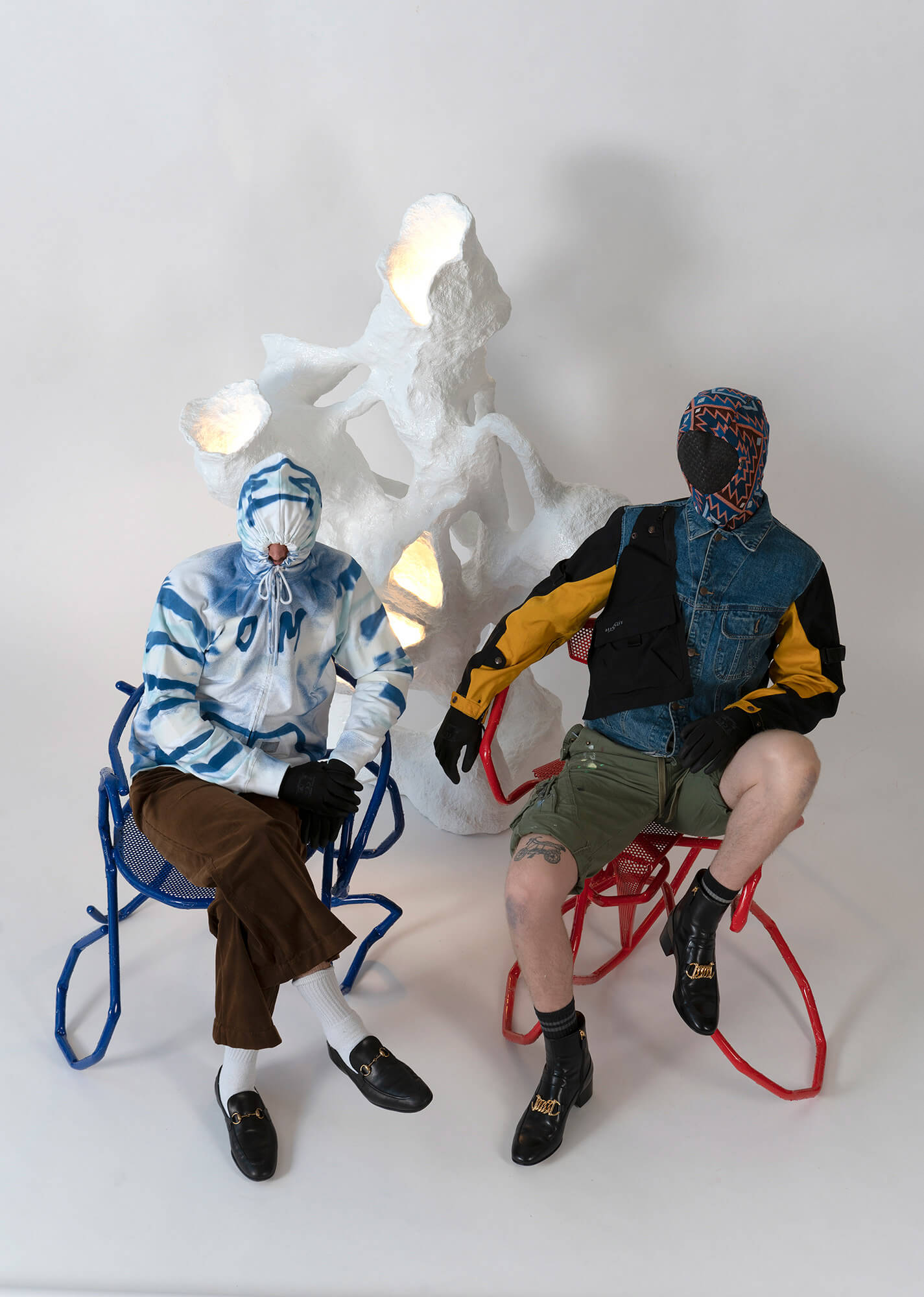 ORTAMIKLOS CAME INTO being in 2015. Leo Orta, from France, and Victor Miklos Andersen, from Denmark – both born in 1993, both to artist parents – had met in their first year at the Design Academy Eindhoven and instantly recognised in each other a similar anarchic spirit. Having joined forces they started developing a practice based as much in performance, as traditional design. Their creations are rooted in the history of sculpture and the decorative arts, but emerge in a chaos of concrete casting, electrical cabling and aggressively carved polystyrene. Colour, graffiti, animation and collaboration place their compelling objects within elusive narratives, expressive of their shared sense of being in the world. Their first exhibitions were uninvited interventions in established fairs. Since then, first Functional Art Gallery in Berlin and now Friedman Benda in New York have given them a global platform. The Design Edit asks them about their collaboration: Why did it begin? How does it work? 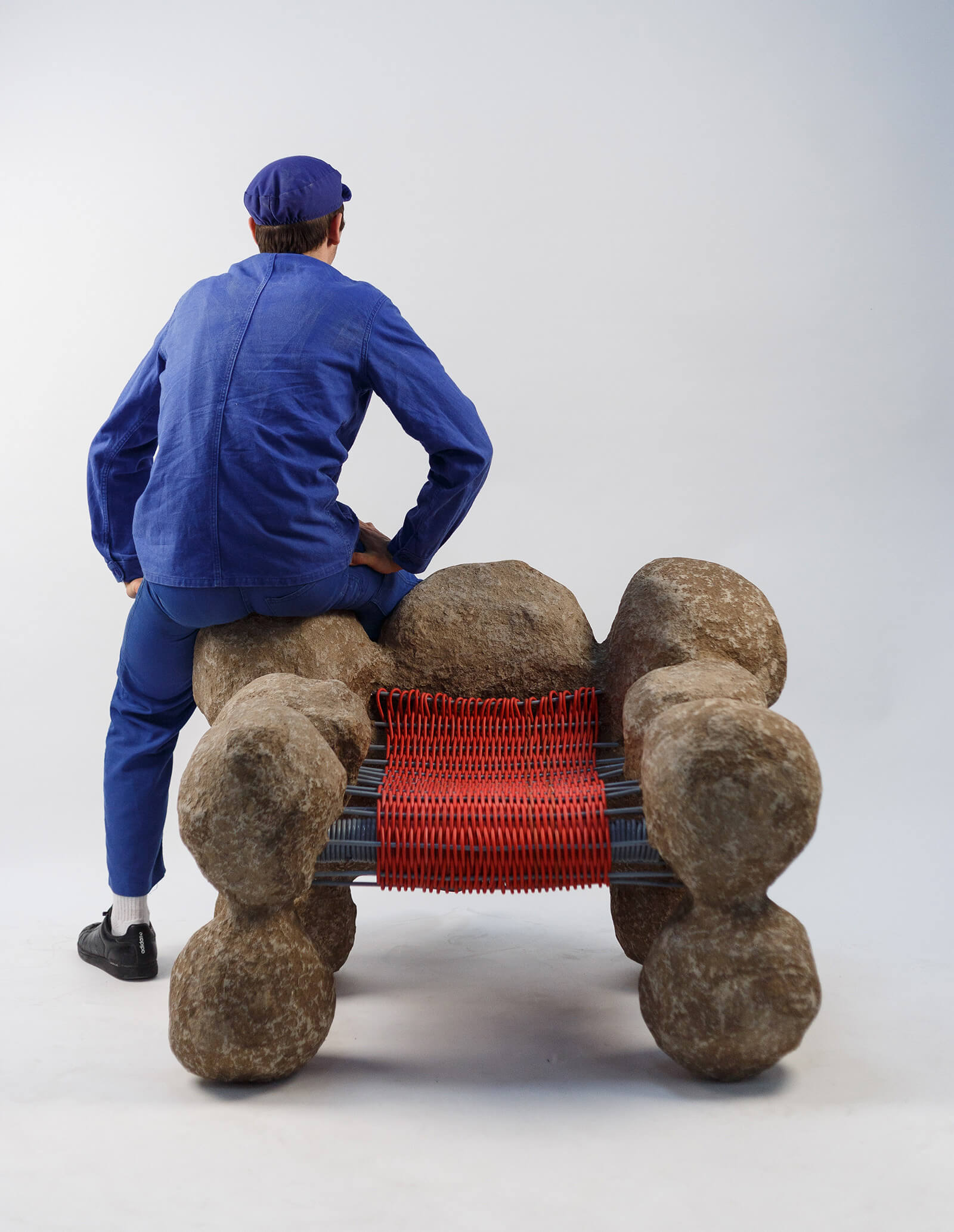 The Design Edit (TDE): How did you meet?
OrtaMiklos (Leo): We were together in the first year of our degree, working on group projects. (Victor) To be honest, I think we mostly met at parties … the impact of the pandemic on students is highly underrated. Then we went on holiday together with both our girlfriends to Berlin. And we had so many ideas over that long summer.

TDE: What drew you to work together?
OrtaMiklos (Victor):  The main thing was we both wanted to do something different, we were both tired with the old way of doing things. (Leo) We were both in very socially engaged departments at Eindhoven, where the object is not the focus of interest. It was not ours either. So, in the second year, we decided to merge a couple of techniques – weaving electrical cables … (Victor) and pouring concrete. We mixed up the two techniques and started a new dialogue – very intuitive, very unexpected. The first series of things we made together was a purely physical, 3D experiment. (Leo) At the end of the second year, however, we decided we wanted to do a guerrilla performance for Eindhoven Design Week. We wanted to reach out to that important audience of 30,000 people. (Victor) We wanted to break up the idea that you had to be professional. We wanted to invade other people’s spaces and express our ideas. (Leo) So we found a tiny studio and we would meet with some friends and draw ideas every evening and weekend. We invented three characters who could hide their gender, age and personality in a bodysuit, leaving us free to speak about concepts. And we then created three objects all dealing with identity: a big portable screen which allowed you to look through the person carrying it, suggesting how you become transparent through social media; a giant cube covered in recycled clothes, and then a transparent backpack filled with cow parts. (Victor) The bodies were the pedestal for the objects. 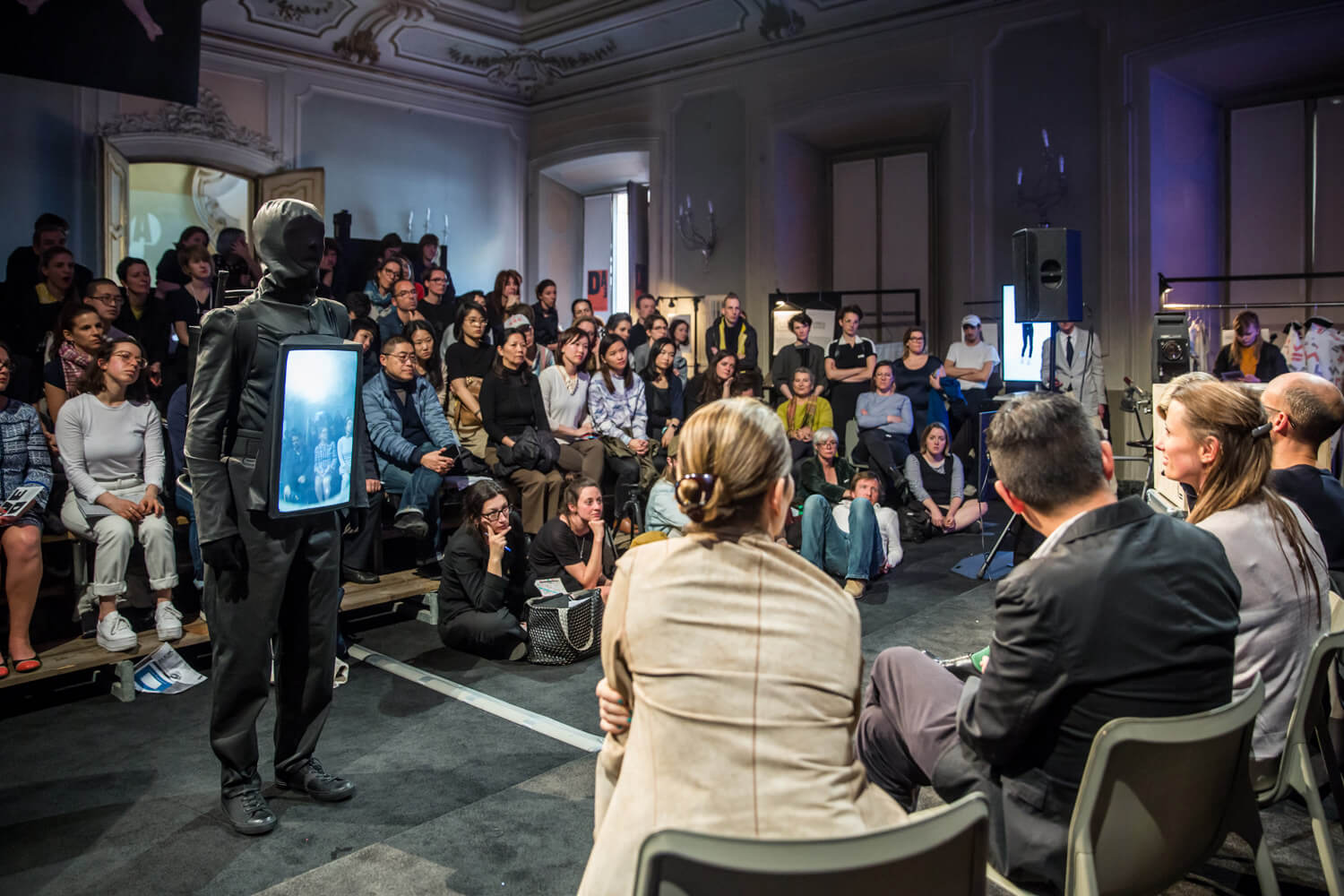 TDE: How has your combined creative output developed?
OrtaMiklos (Leo):  I went to Portland, Oregon, for six months to do a course on performance and on sculpture. (Victor) For my college minor, I set up a collective. We wanted the freedom of creating our own educational system, so we created an artificial intelligence which told us what to do, around which we formed a kind of cult. But as soon as we were reunited, we were overwhelmed by the desire to make objects. (Leo) Straightaway I told Victor that we had to have a studio. (Victor) I’ve wanted to be a designer since I was twelve, but always within the Danish Modernist tradition – which I respect as a reaction to the two World Wars. I did a lot of carpentry and woodwork in Copenhagen, but I just realised at some point that there was no point in reproducing the past. So when I went to Eindhoven I promised myself that I would never make another chair. Then, when I was introduced to all these new ideas about making, I felt that we could now make objects that say something relevant to our generation. (Leo) So we came up with the idea of taking part in Copenhagen Design Week. We couldn’t afford to go as official participants, but through Victor’s contacts, we managed to get access to an old part of the Carlsberg Brewery. (Victor) What made that successful was that we had also to tackle the prosthetics of the work – the logistics, the marketing. (Leo) I grew up in Millennial Paris, in the fashion world, so we used Instagram, models and photography to draw a different crowd to our show. That is where we met Functional Art Gallery, in 2018. Since then we have carried on working together. I graduated in 2019 and Victor graduates this year. 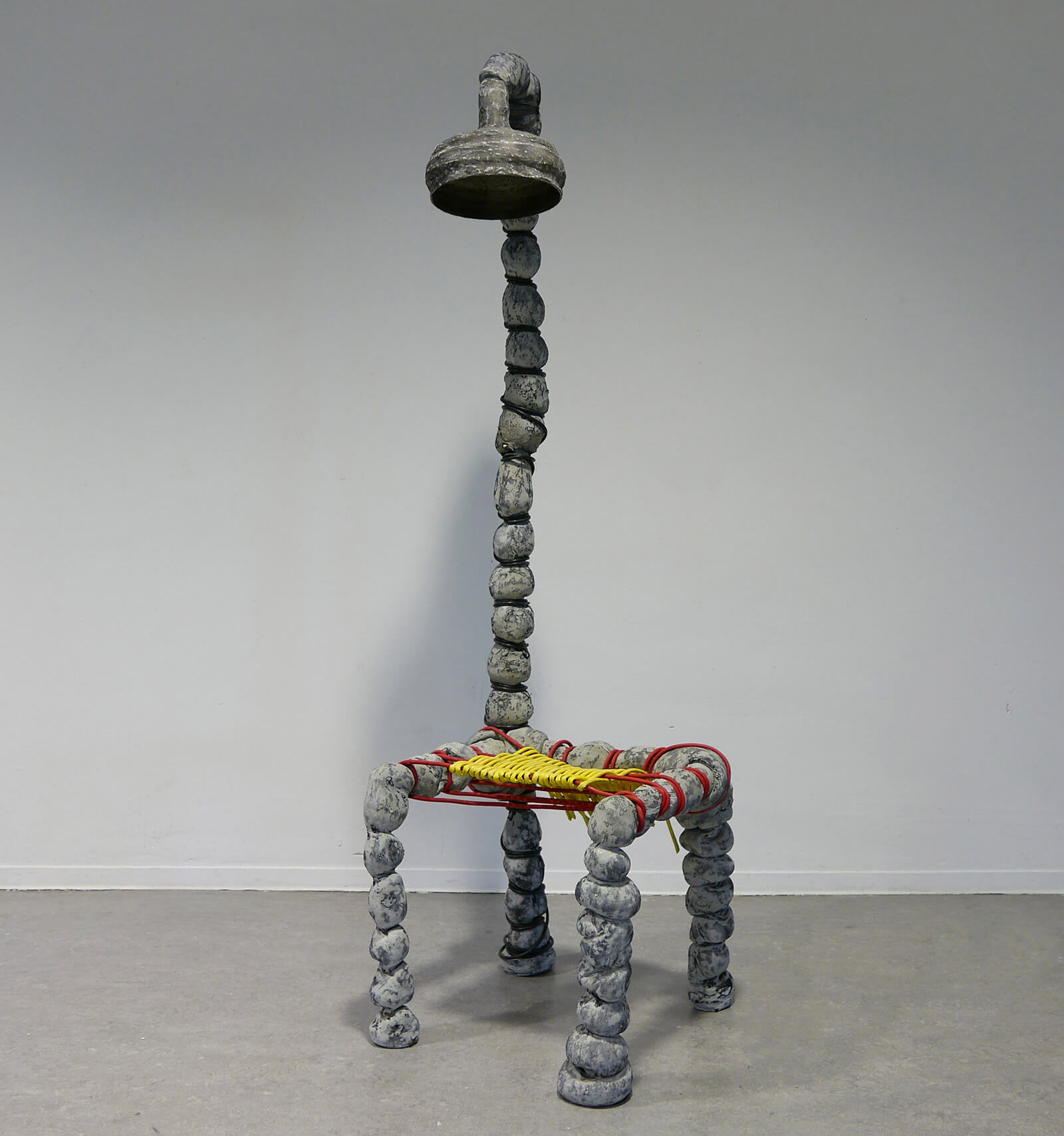 TDE: How do you work creatively? Do you split the work, do your skills overlap and complement, or are you polar opposites? Chaos and order, structure and fluidity?
OrtaMiklos (Victor): We overlap a lot, of course. We are both very expressive and we work intuitively, but Leo is very good at doing a quick sketch and then making something. I tend to attack the material. Leo is the wizard at communications. I need my fingers deep in the material. 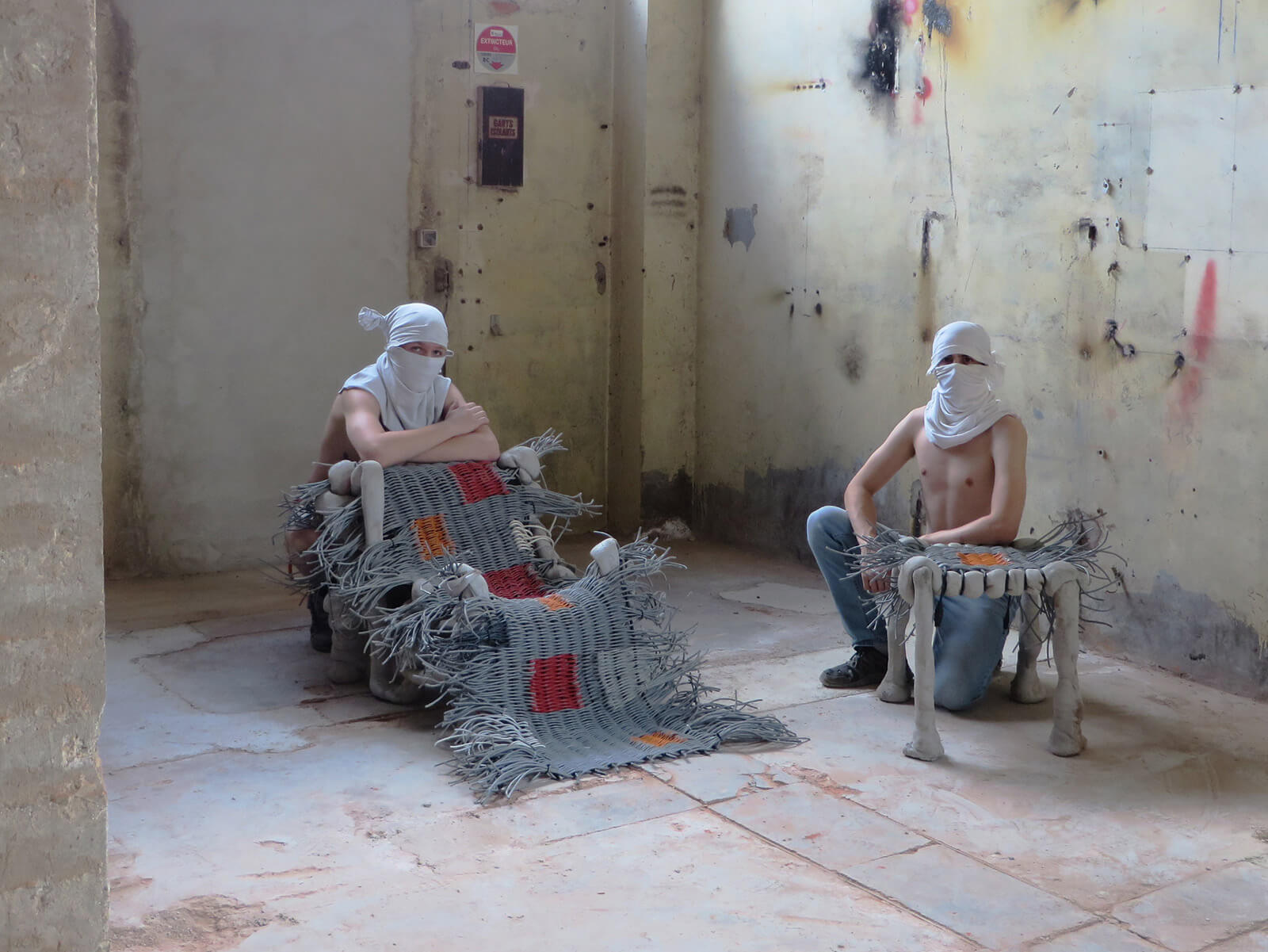 TDE: How do you deal with tension and friction, pulls in different directions?
OrtaMiklos (Victor): There is a lot of tension in the work because there are two different minds. This is where it becomes interesting. It is about continuing with the disagreement. I think one of our most used phrases is “Let’s just see …” On the other hand, I am more together with Leo than in any romance. I think we have made over 100 babies. 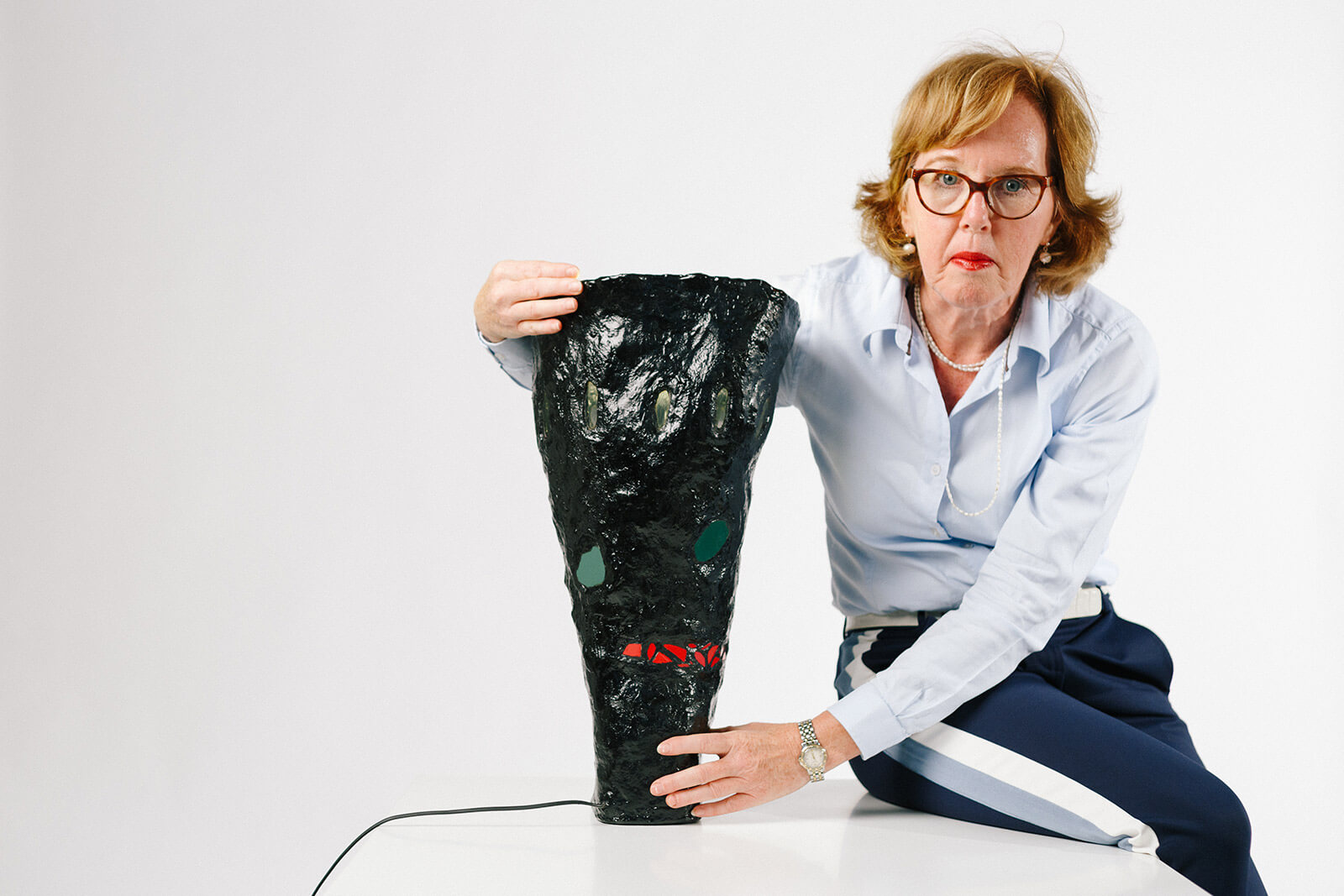 TDE: Why are two people better than one?
OrtaMiklos (Leo): From the very beginning it gave me confidence, having someone say: “This is not too dangerous”. This has allowed us to step into places that were very uncomfortable. Not everyone can make a pink chair with lifelike arms – with people saying, “This is very weird” – when it is coming from your own persona. Maybe I wasn’t confident enough to do these things on my own. (Victor) It is hard, on your own, to be completely vulnerable to your work and completely strong in yourself. In a duo, we can rely on each other, we can accept the liquidity of being an unstable, vulnerable person, and the process of subconscious, intuitive creation. You can go to places you cannot control, and that is particularly important today: to soften up the aesthetics of control.

TDE: What are you working on at the moment?
OrtaMiklos:We have just finished a show for Friedman Benda – 6 acts of confinement – which became a huge and transformed project because of lockdown. It is running in New York until 31st July. 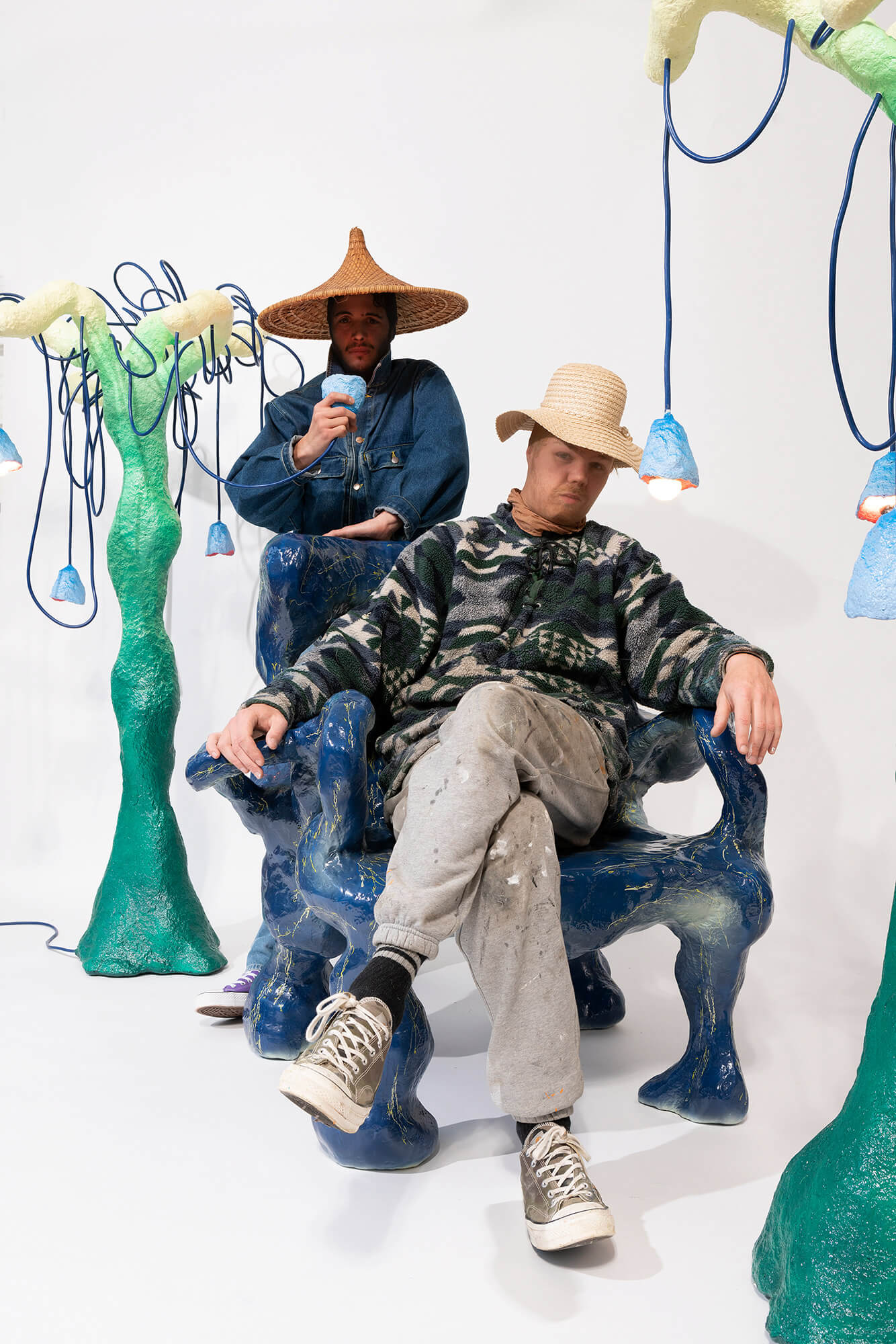