The design expert and auctioneer talks to The Design Edit about Piasa's broad vision for international design.

FRÉDÉRIC CHAMBRE IS a trailblazer in the Paris auction world. As Piasa’s general manager and head of its design department, he has made design the most important sector of the French auction house.

In Piasa’s premises on the prestigious Rue du Faubourg Saint-Honoré, Chambre has been prolific in implementing sales of Italian, Scandinavian, American, Brazilian and French design. He has also orchestrated monographic sales on the likes of Eric Schmitt and Dimore Studio. This strategy has proved fruitful: according to Chambre, design accounts for 60-65 percent of Piasa’s turnover.

Born in Paris, the son of a dealer in second-hand machine tools, Chambre, 57, studied law and history of art to become an auctioneer. As a partner at Calmels-Chambre-Cohen, he organised the sale of objects and souvenirs of the singer Maria Callas in 2000. It drew the attention of Pierre Bergé, the erstwhile business partner and lover of Yves Saint Laurent.

Chambre then worked with Pierre Bergé & Associés from 2002-2012 – the high point was co-organising the sale of the Yves Saint Laurent and Pierre Bergé collection in 2009 with Christie’s. Chambre was one of the auctioneers at the magnificent auction held in the Grand Palais, which spanned several days. Shortly after Chambre parted ways with Pierre Bergé & Associés, Piasa came knocking. Under Chambre’s stewardship, Piasa relocated from St-Germain-des-Prés to be in the vicinity of rivals Sotheby’s, Christie’s and Artcurial. Piasa’s owners Laurent Dumas, Serge Weinberg and Charles-Henri Filippi entrusted Chambre with the development of the design department, bringing the house a reputation across the board in international design.

Chambre’s office is on Piasa’s first floor, down the corridor from the open-plan space of his staff. Sitting at his large wooden desk, in front of shelves filled with Piasa’s catalogues and facing a Vik Muniz photograph on the opposite wall, Chambre talks to The Design Edit about his market approach.

The Design Edit (TDE): When and why did it occur to you to explore design as a specialism?
Frédéric Chambre: At Pierre Bergé & Associés, we opened a salesroom in Paris, followed by Geneva in 2003 and Brussels in 2006. After starting Brussels, I thought we should develop a twentieth-century design department so we implemented strategies for Scandinavian, Italian and contemporary design. Twentieth-century French design appeared in Art Deco sales, with designers like Jean Royère, Jean Prouvé and Charlotte Perriand, but there wasn’t a broader vision on international design.

I already thought that interior design would occupy a predominant place in the minds of collectors and that the idea was no longer merely to live with art but to live in art. We were gradually returning to the idea that [Austrian designer and architect] Josef Hoffmann had developed at the end of the nineteenth century, about art encompassing everything from the decorative arts to the visual arts. As material from the twentieth century was going to become more important and finding high-quality Art Deco furniture was becoming very difficult, collectors were bound to turn their attention to design from the 1950s to the present day.

TDE: You were one of the auctioneers of the sale of Yves Saint Laurent and Pierre Bergé’s collection at the Grand Palais. What was the highlight for you?
Frédéric Chambre: I was fortunate to organise two sessions of the Yves Saint Laurent and Pierre Bergé sale and sold under the hammer Eileen Gray’s famous armchair for €22m. It’s an extraordinary memory. Participating in the preparation of the exhibition and the sale will always be unforgettable for me.

TDE: What has been your objective at Piasa?
Frédéric Chambre: Piasa’s shareholders entrusted me to bring a new eye and vision. We reflected on what position Piasa should have for it to be one of the world leaders in this specialism. Design has taken on a certain importance, like contemporary and modern art and niches like African contemporary. It represents a large part of Piasa’s turnover and hopefully will represent an even larger part.

TDE: How has the pandemic impacted your outlook and strategy?
Frédéric Chambre: Our turnover in 2020 was €25m – not catastrophic given that we lost nearly three months of activity – compared to €30m in 2019. 2021 has started well and I think we can be very, very positive. Human relationships remain fundamental to our trade and this aspect has been lost a bit during the crisis. Before I used to travel five months a year but since last March I’ve travelled for barely 15 days. The pandemic has made us wonder whether we’ve entered a more virtual world where online-only sales will become the norm. There are enormous savings on catalogues, mailing lists and transport with online-only sales because there’s no exhibition. But the catalogue [of a physical sale] is our biggest strength: our clients might easily miss an email but they’ll have two weeks to find a relaxing moment to peruse a catalogue.

TDE: Besides Piasa’s geographical design and monographic sales, what defines its outlook?
Frédéric Chambre: Our strength is having a moral rather than a financial contract, investing 100 percent in fulfilling our promise to the vendor. Our philosophy to promote something is: “We like it, we hope you’ll like it.” It’s not: “I like it, you should like it.” Even so, this is a trade where one receives more mails and telephone calls from vendors expressing discontent than expressing satisfaction.

What’s typical of Piasa is the eye of great interior designers and architects who have designed a sale’s scenography with complete freedom. We like narrating the universe in which a designer has lived – like the sale of Christian Astuguevieille, of objects from his house in Bayonne, or the one on Eric Schmitt.

TDE: Some might say that you’re disrupting the codes by holding so many sales with objects coming straight from designers.
Frédéric Chambre: We’re disrupting the codes a bit because we don’t wait for people to give us objects to sell. We go and ask them if they have objects that can be integrated into this or that sale. For instance, we might call someone and say: “Our next American design sale is on 27th May, I know that you have a chest of drawers by George Nakashima, do you still want to keep it?” But there are lots of things that happen naturally and we’re very selective.

TDE: What are your criteria for selecting objects for a sale?
Frédéric Chambre: We don’t just sell a name, but an object and a name. We have a meeting once a week to discuss all the pieces. First of all, we look at the object visually to see if it is in harmony with the spirit of Piasa before carrying out research on authenticity, expertise and prices. Sometimes we have pieces by fairly unknown designers that we estimate at €2,000-€3,000 and by a stroke of luck they make money. It was like that with the late Czech designer Pavel Novák who nobody had heard of before. We exhibited his pieces in January, with low prices, and they went for five to ten times as much. That’s Piasa: looking, liking and presenting. It’s not necessarily: “That’s worth €100,000, let’s present it.” We won’t spit on an object worth €100,000, but we’ll explore and prospect other things too.

TDE: What further plans for development do you have?
Frédéric Chambre: China is an important market to develop but it’s complicated. Four or five years ago, we had a desire to show western design in Beijing alongside China’s historical design but we abandoned this idea. It’s a project that we might renew but it’s difficult. Thanks to that foray, I met Chinese designers and orchestrated the first sale of Chinese contemporary design in Europe in 2016. I wanted to do a second one but was unable to discover sufficiently important new talents and all the designers I’d met before hadn’t evolved enough to offer anything different.

I’d also like to work on the 1800s and the 1880s-1890s, which enormously influenced design and art and craftsmanship, and explore forgotten segments. For example, in Scandinavian design, I’d like to show the importance of popular Swedish and Danish design in the eighteenth century like painted wooden furniture. We could show how pieces might have a very similar aesthetic despite being one or two centuries apart and how they can be mixed together.

TDE: What can you tell us about your own collection?
Frédéric Chambre: My wife and I have always bought things that we like together. No purchase is made if we disagree. Seven years ago, we sold everything that we’d accumulated over 20 years and completely changed our universe. Since then, we’ve been more attracted to photography than visual art even though we’d never thought of buying photos before. Today, our interior is much more zen. Perhaps we’ll change it again in five or six years. But we’ve never had a speculative or collecting goal. For me, a collector is someone who sells shares to buy an object that they can’t afford otherwise and might endanger themselves financially, which we would never do. Buying artworks doesn’t make you a collector; the majority of people want to live with objects which they feel good about. I like waking up in the morning, going downstairs and looking at a photograph, a painting or a table. But I like changing things, I’m not attached to objects.

TDE: How would you sum up your career?
Frédéric Chambre: My career has been a path of encounters, dialogues, discussions, discoveries and making radical changes to do with my way of seeing things and managing departments. 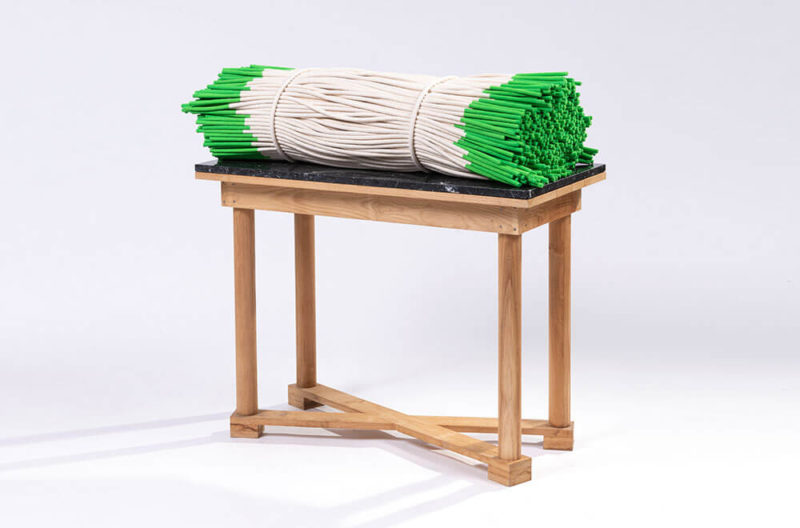 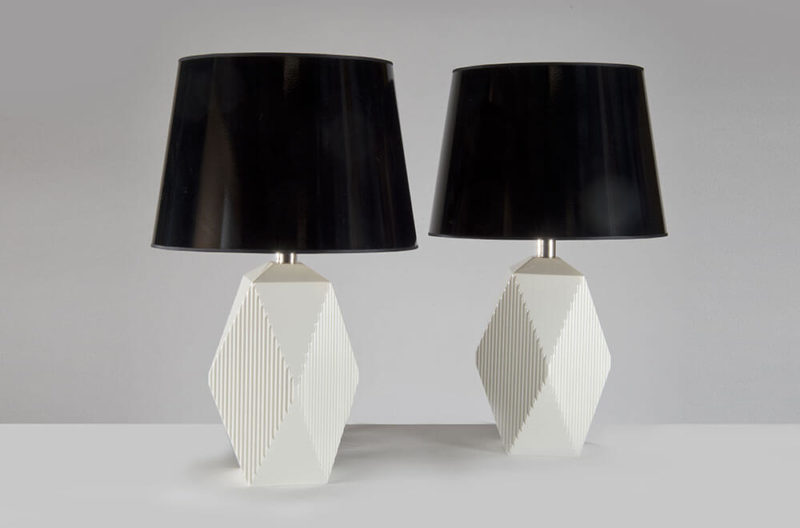 Piasa: Oitoemponto Art + Design / SALE PREVIEW: Two designers and collectors, founders of Oitoemponto, offer for sale a selection of glamorous work – their own and others. 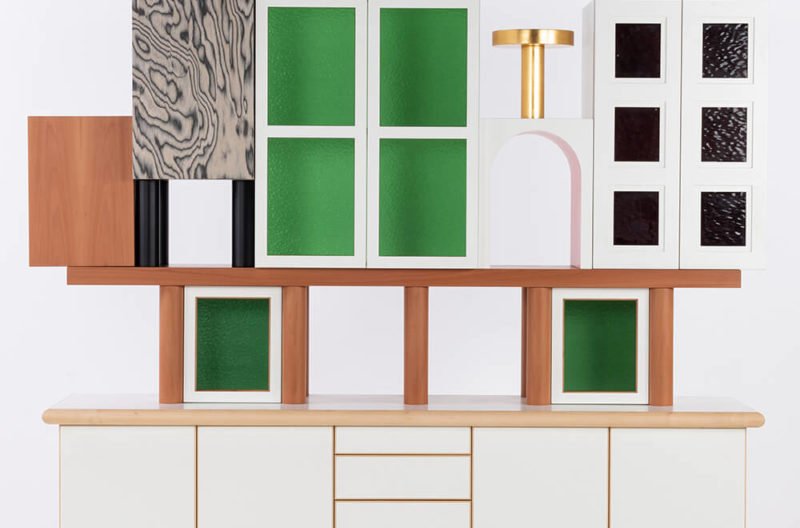