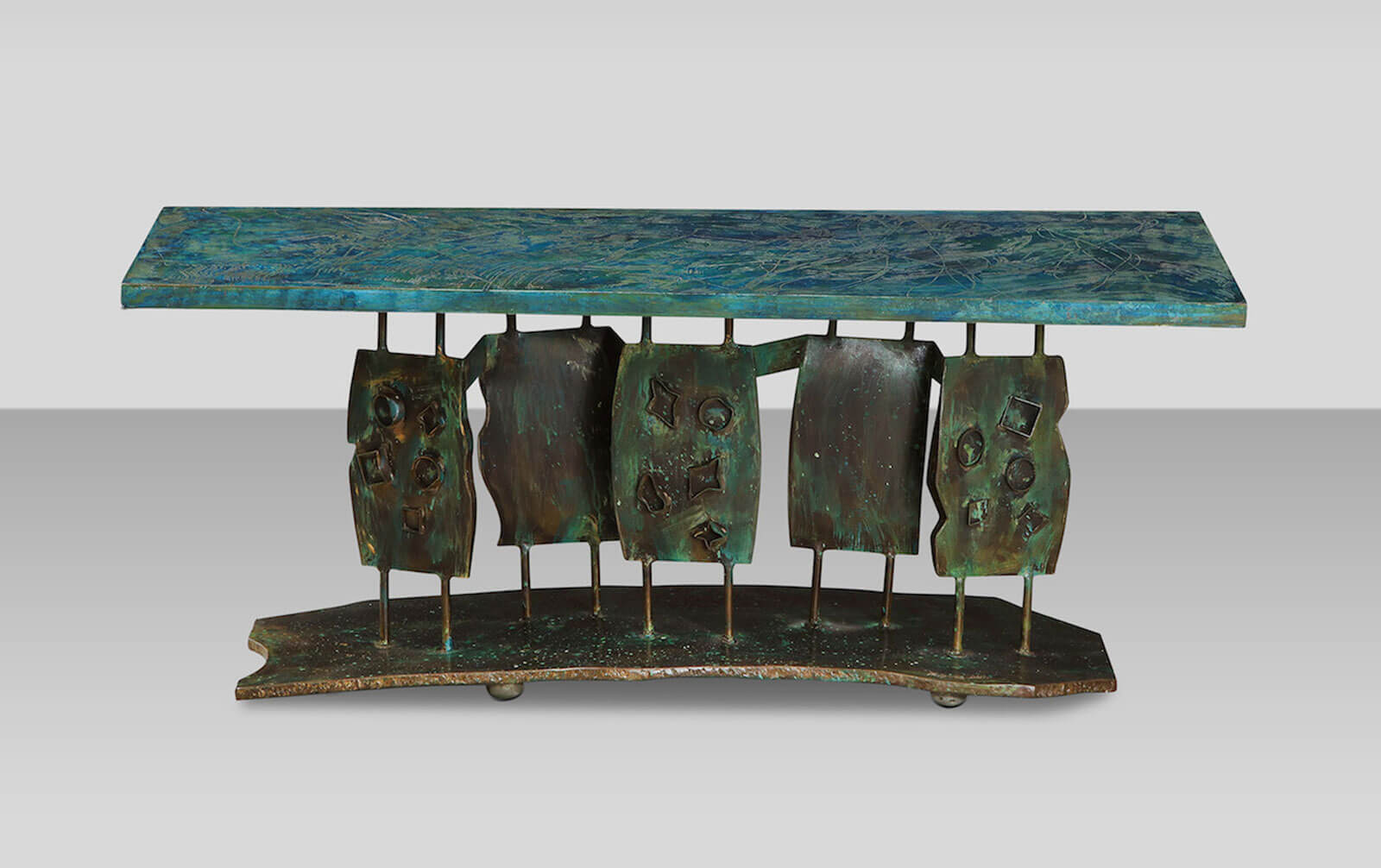 A LANDSCAPE OF geometric relief shapes scatters across five interspersed bronze plates. Hoisted in mid-air by thin connectors, these roughly-cast surfaces run perpendicular to an undulating base plane and a polychromed tabletop. The dark-hued legs and support are more organic in shape and somehow meld together, while the turquoise counter follows straight lines. Though these contrasting elements might seem disjointed, a heavily patinated and brushed texture creates a palpable connection. Altogether, this rectilinear table appears to be floating off the ground, and yet, its sturdiness, thickness, and sheer materiality suggests otherwise.

‘Dance of the Fauves’ was designed by celebrated 20th-century father-son duo Philip and Kelvin LaVerne in 1970. This low-lying table is characteristic of the New York-based studio craft practice. The pair were known for creating functional sculptures that paid tribute to the past while also exploring new forms. Many of the first works they created together in the early 1960s made reference to historical civilisations, such as Ancient China, Greece, Rome, and Egypt, with elements inspired by mythology. They often buried these compositions in soil to achieve the appearance of antiquity.

Over time, their mastery of materials like cast bronze and moulded pewter moved into more experimental territory. Their use of unconventional techniques like hand-torching and chemical reactions led to more abstraction, and yet their implementation of traditional motifs remained evident. The LaVernes began translating these works into furnishings such as tables and consoles. With Philip’s death in 1987, his son Kelvin moved on to an entirely different practice. For that reason, many of the works they created during the two productive decades they worked together are rare and highly sought after. 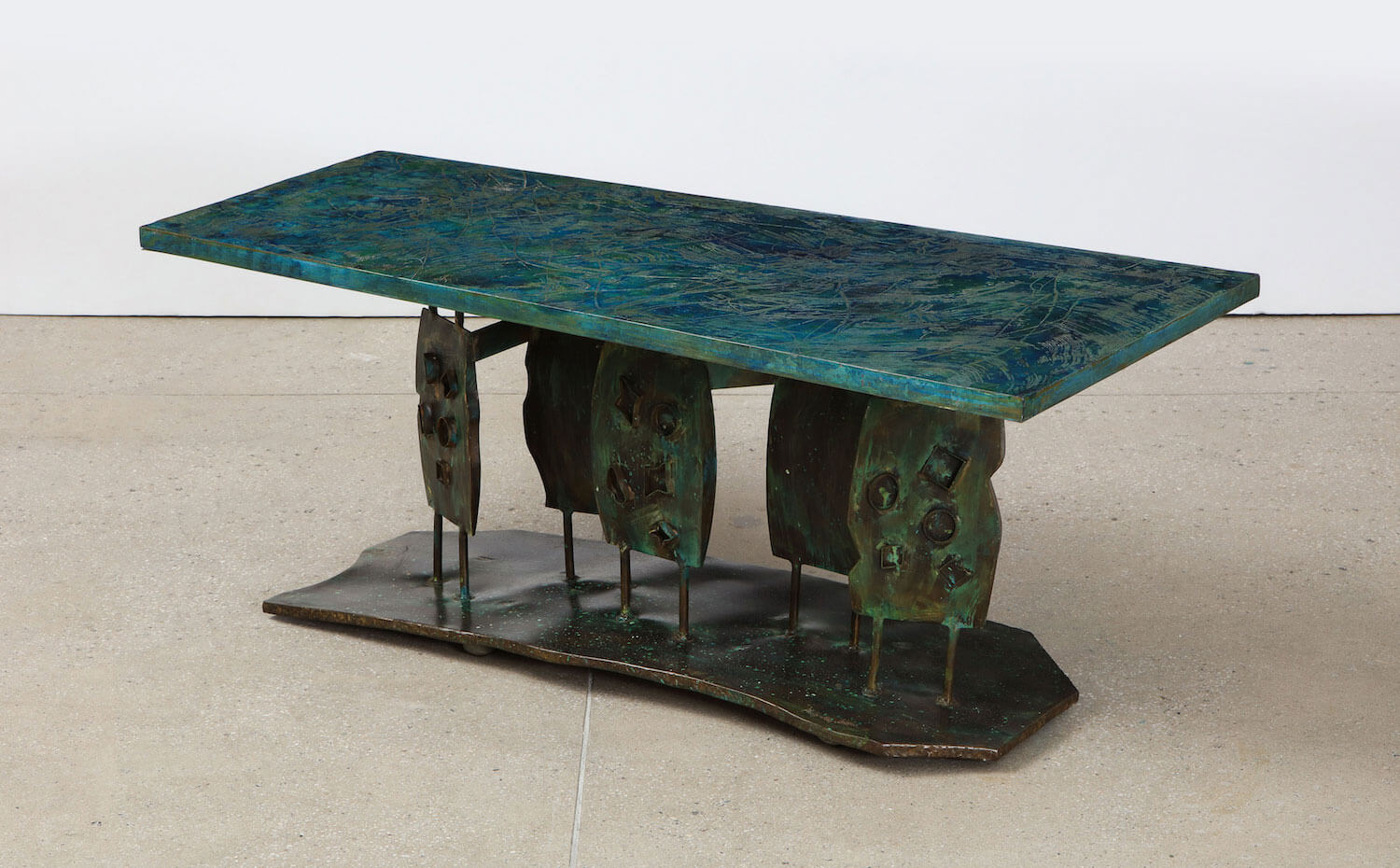 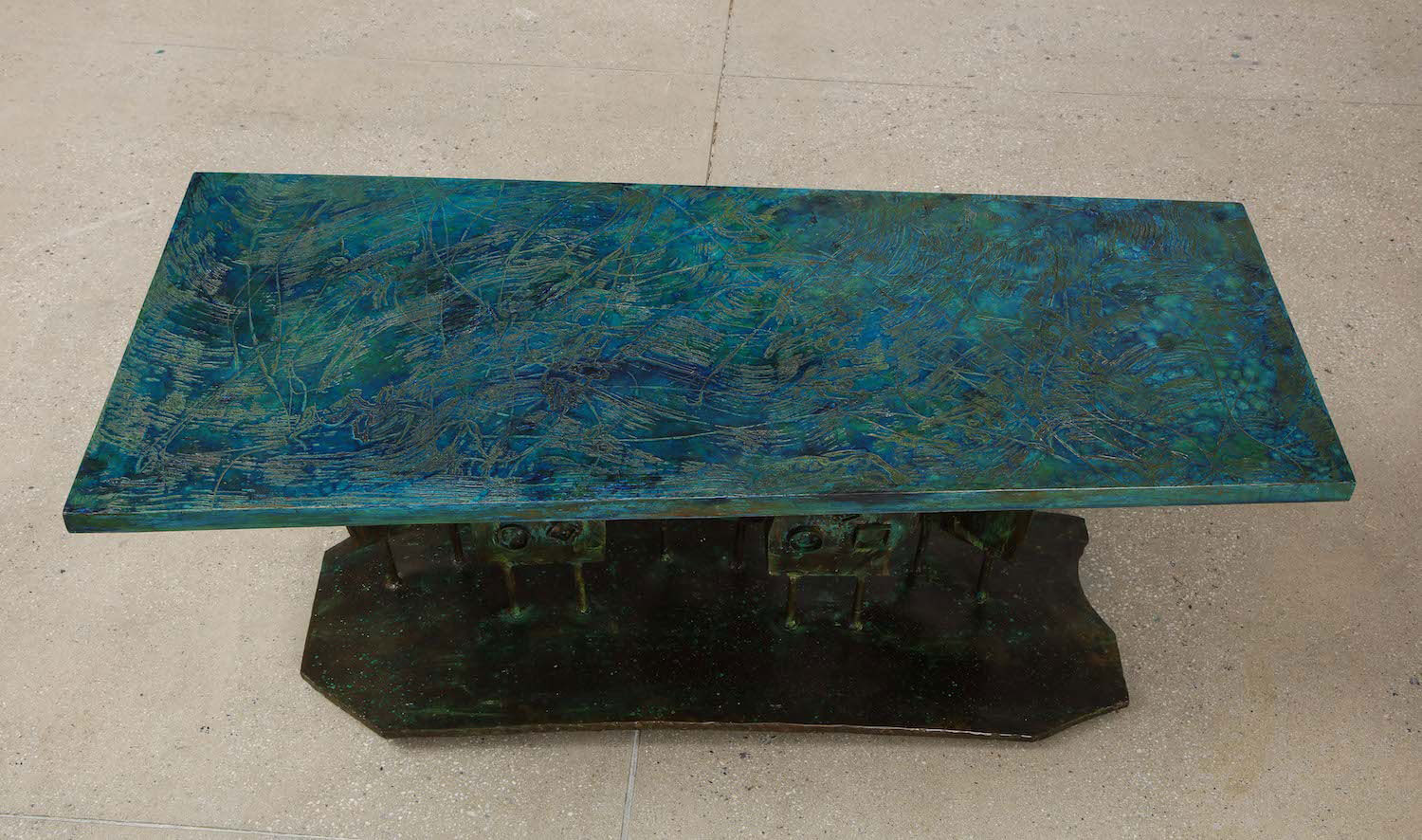 Philip & Kelvin LaVerne, ‘Dance of the Fauves’ table, circa 1970 (from above)
COURTESY: Donzella 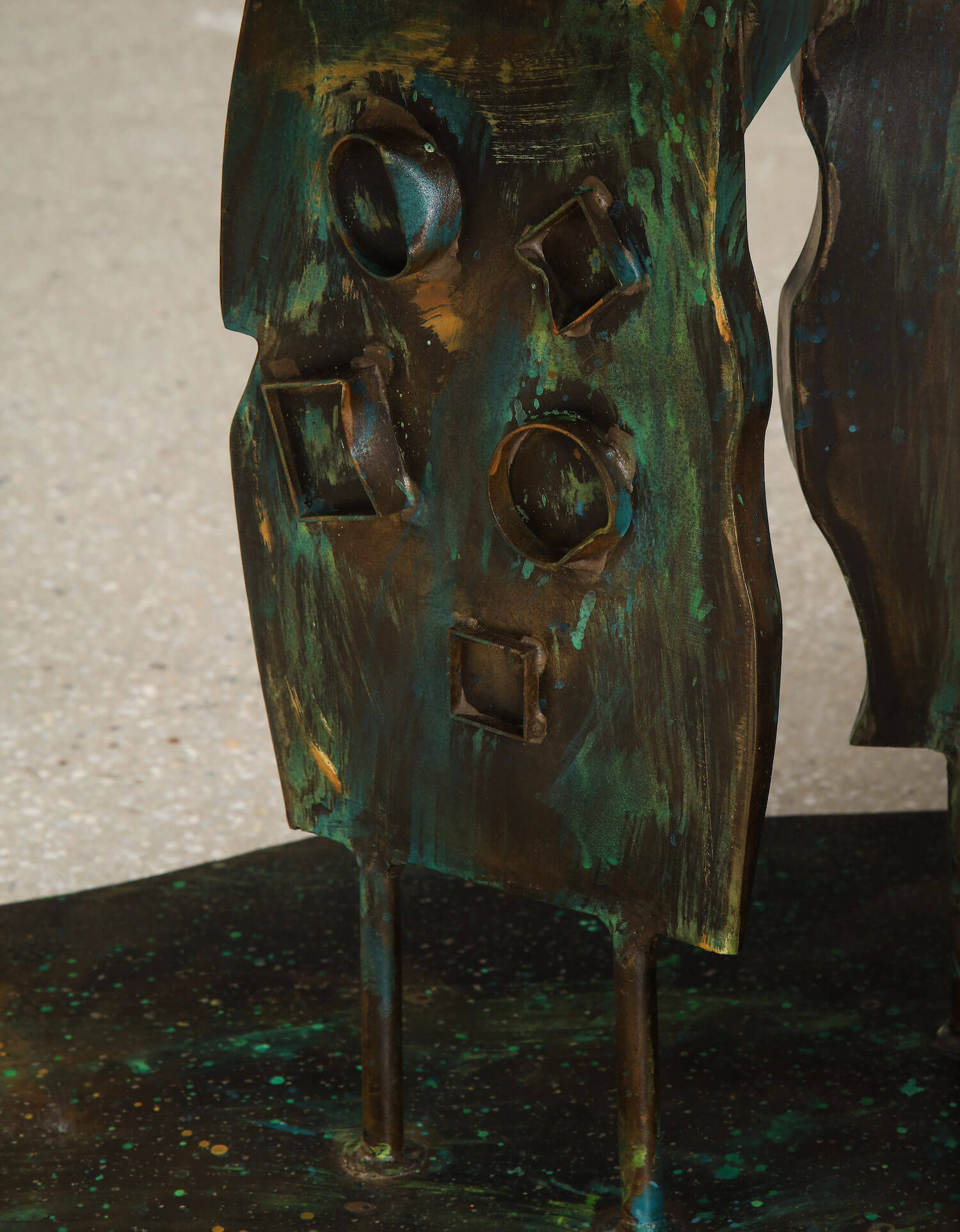 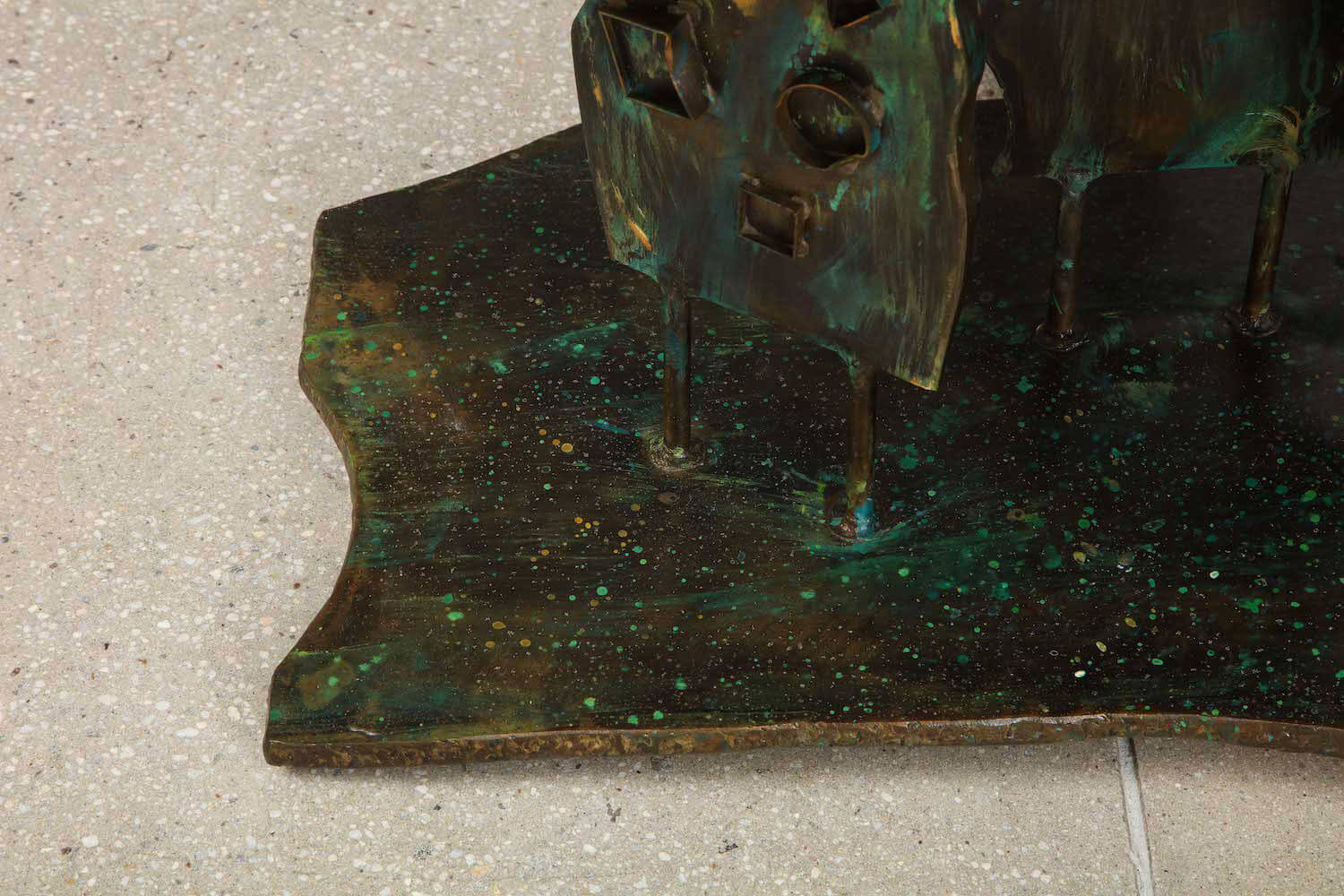 ‘Dance of the Fauves’ is a homage both to Fauvism, with its daring use of colour, and also to the post-war modern architecture of the time. “Kelvin was inspired by 20th-century art and culture and has made many tables in celebration of different artists and social movements,” New York gallerist and founder of Donzella gallery, Paul Donzella, explains. “Although it’s quite festive in many aspects, it is also one of the very few LaVerne creations that can be called ‘brutalist’ in its style.” The more painterly, exuberant qualities associated with the early 20th-century art movement and the asperity of monolithic and blocky buildings seem to be reconciled in this highly expressive piece.

On view until January 22nd, celebrated antiques fair, The Winter Show, has gone virtual. In doing so, it asked every exhibiting gallery to select a featured item to present. Donzella chose this distinctive piece. 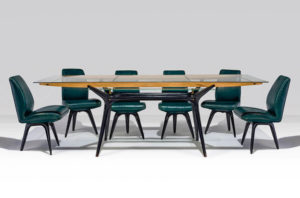 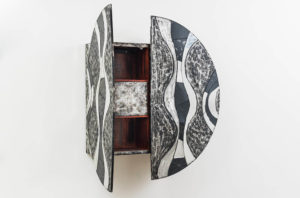 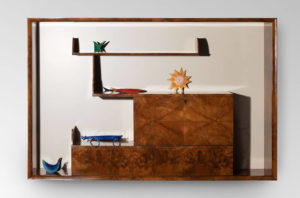