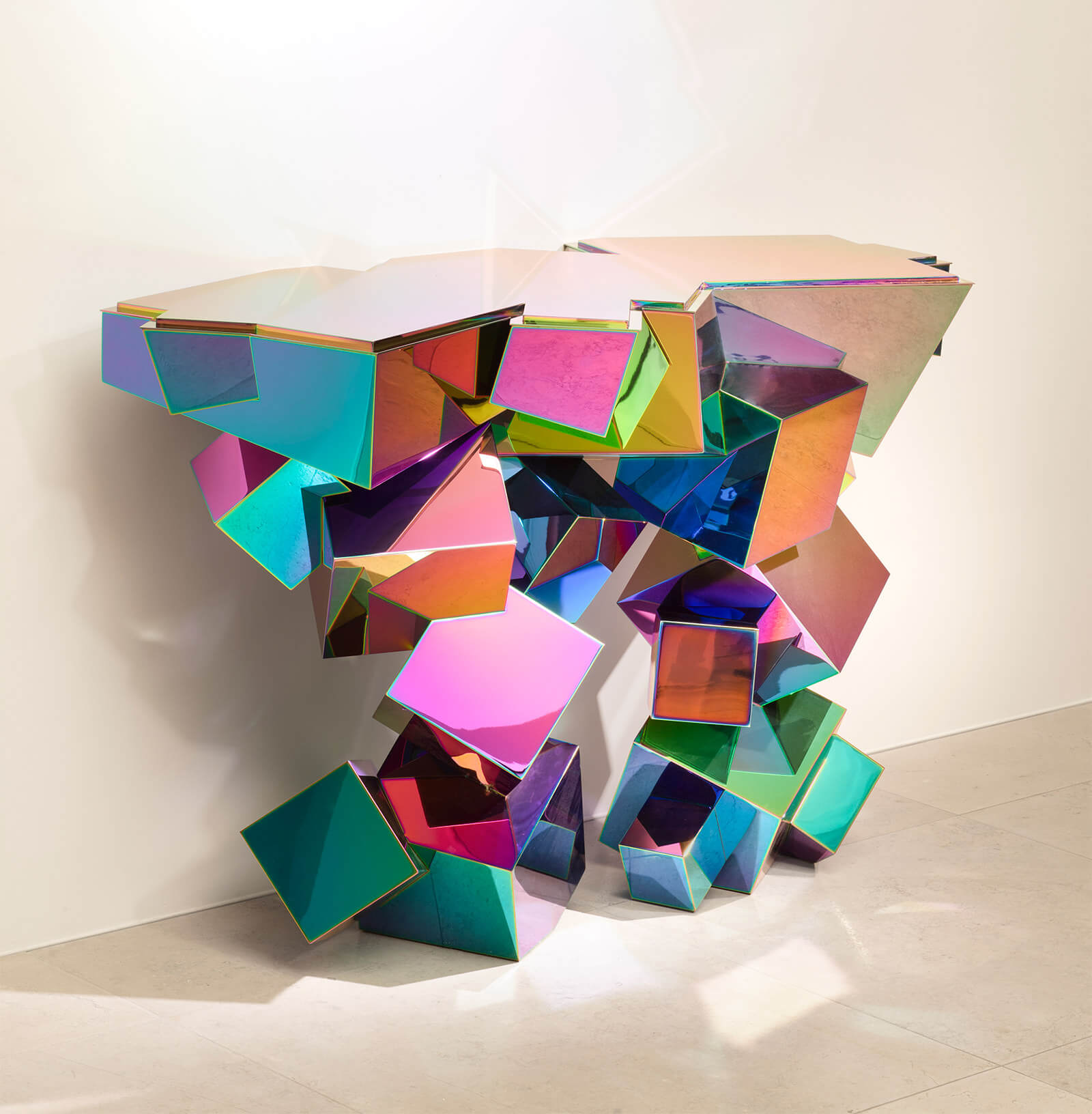 “IT’S A MINESTRONE soup of ideas but all the ideas correspond to each other,” Hervé Van der Straeten says about his new exhibition of luxurious furniture and lighting at his eponymous gallery in Paris. Titled ‘FUN RIDE’, this is the French designer’s tenth exhibition since opening his gallery, situated behind a cobbled courtyard in the Marais, in 1999. On show is an eclectic array of 35 unique and limited edition pieces, meticulously made by artisans in his bronze and woodworking ateliers exalting traditional craftsmanship in the suburb of Bagnolet. 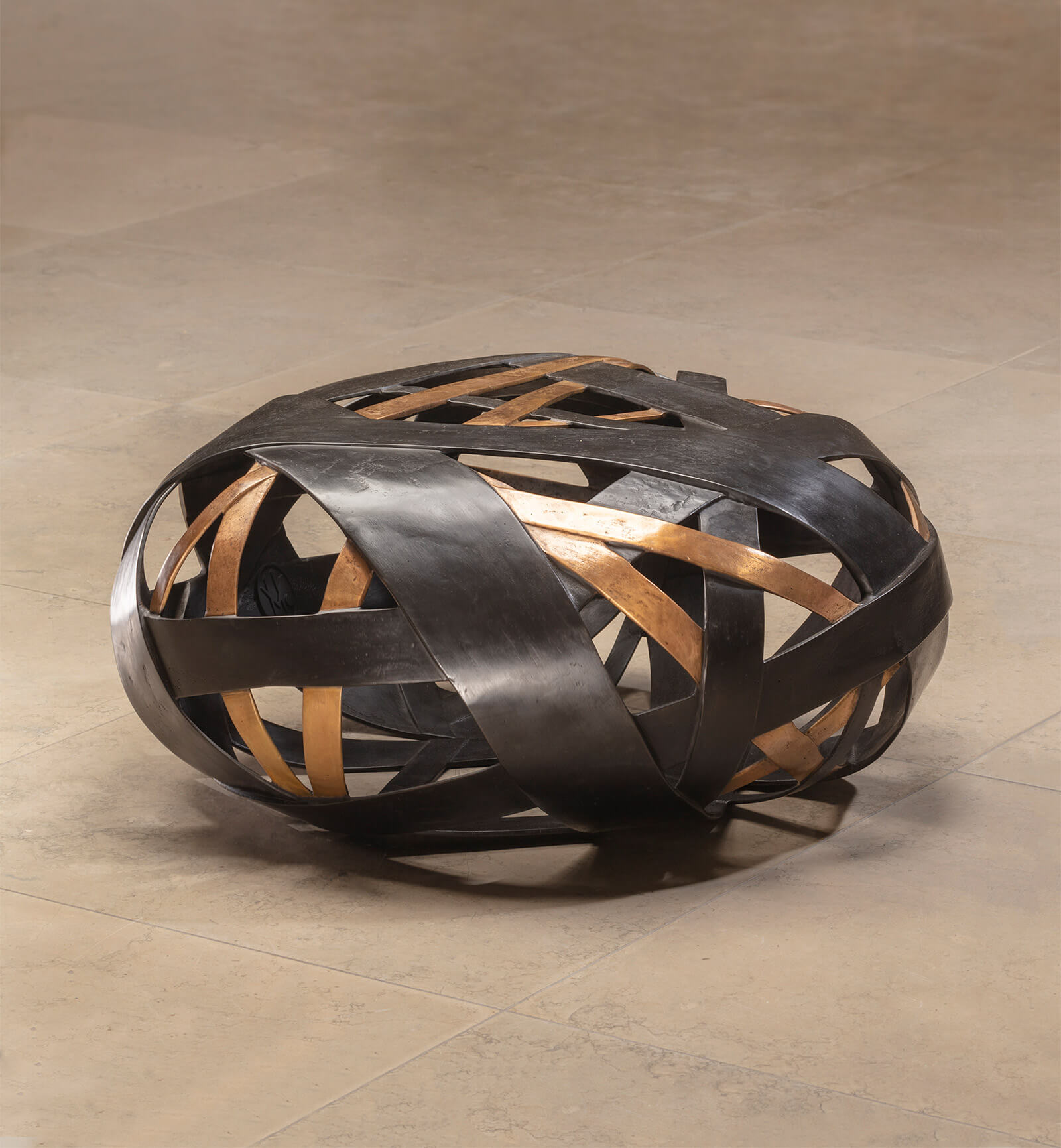 Some pieces revisit the deconstructed, geometric forms from earlier in Van der Straeten’s career, this time translated in an explosion of colour. ‘Console Cristalloïde’ is made from variously sized, rainbow-coloured, iridescent stainless cubes, flashing out from different angles, while ‘Console Zappy’ has triangular extrusions in sherbet yellow. By contrast, the ‘Candy’ chandelier, with blown-glass ovals set in bronze, recalls his background designing jewellery. 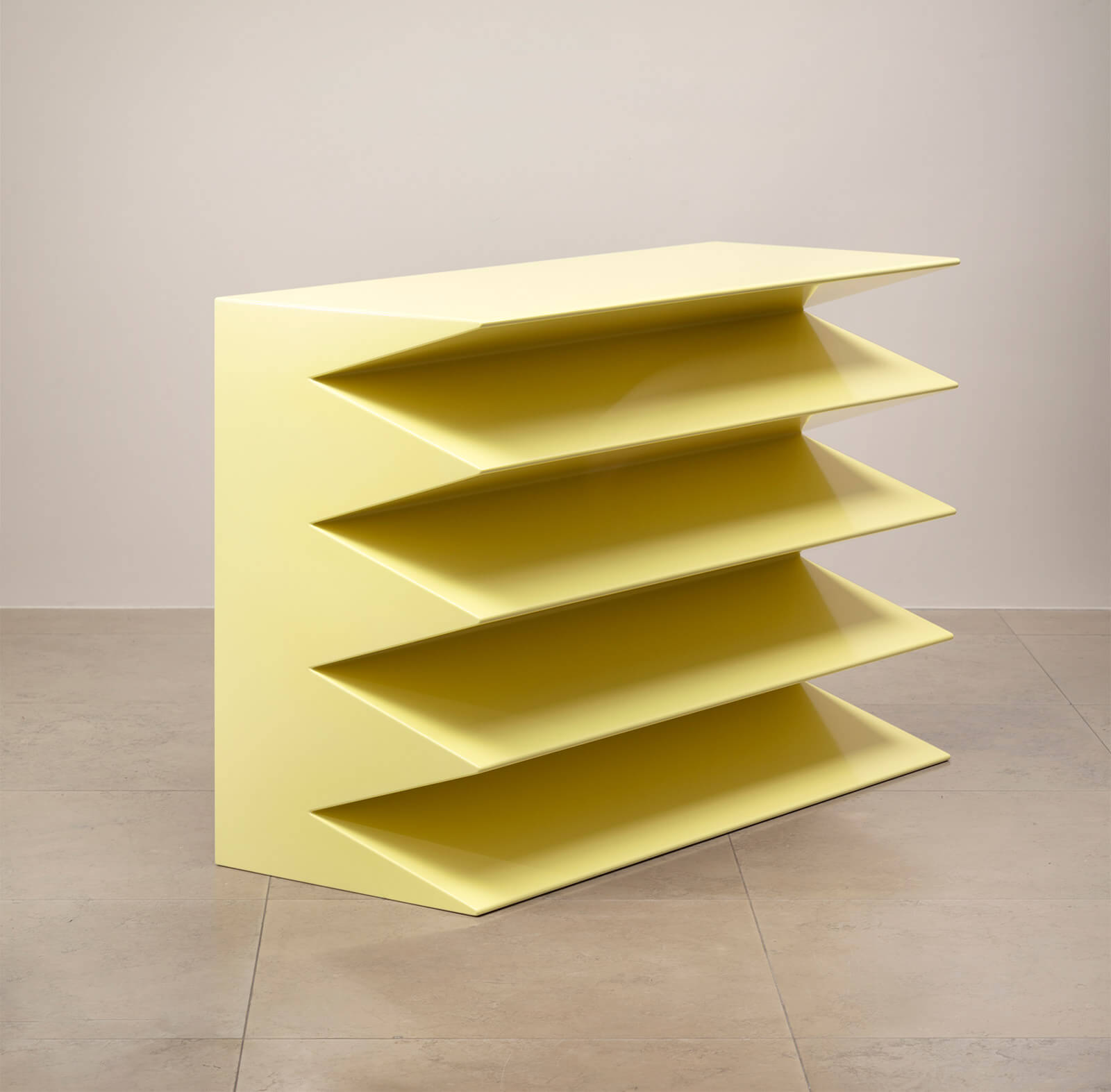 “I make a lot of sketches in my notebook and at one point I wanted something more colourful, joyful and dynamic, hence the theme,” Van der Straeten explains in his first floor office, which is lined with shelves of notebooks and books, above the gallery. Indeed, ‘FUN RIDE’ can be perceived as an antidote to what has been a tumultuous year in Paris, from the ‘Yellow Vest’ protests to the metro strike over President Emmanuel Macron’s pension reforms. Van der Straeten has responded by channelling his creative energy into make something buoyant.

Other pieces evoke a frozen moment of movement. The ‘Bowling Console’, for instance, has dark glass beads on slabs of lacquered wood that look as if they might roll if nudged. Similarly, the ‘Méditation Console’ – its line of thin, golden cylinders at the top giving way to increasingly larger, irregularly sized cylinders at the bottom – looks like it may topple at the merest touch. Each element, of course, is calculated to fit exactly where it is. As Van der Straeten says, “One has the impression of something very simple, but actually it’s quite complex and technically difficult.” 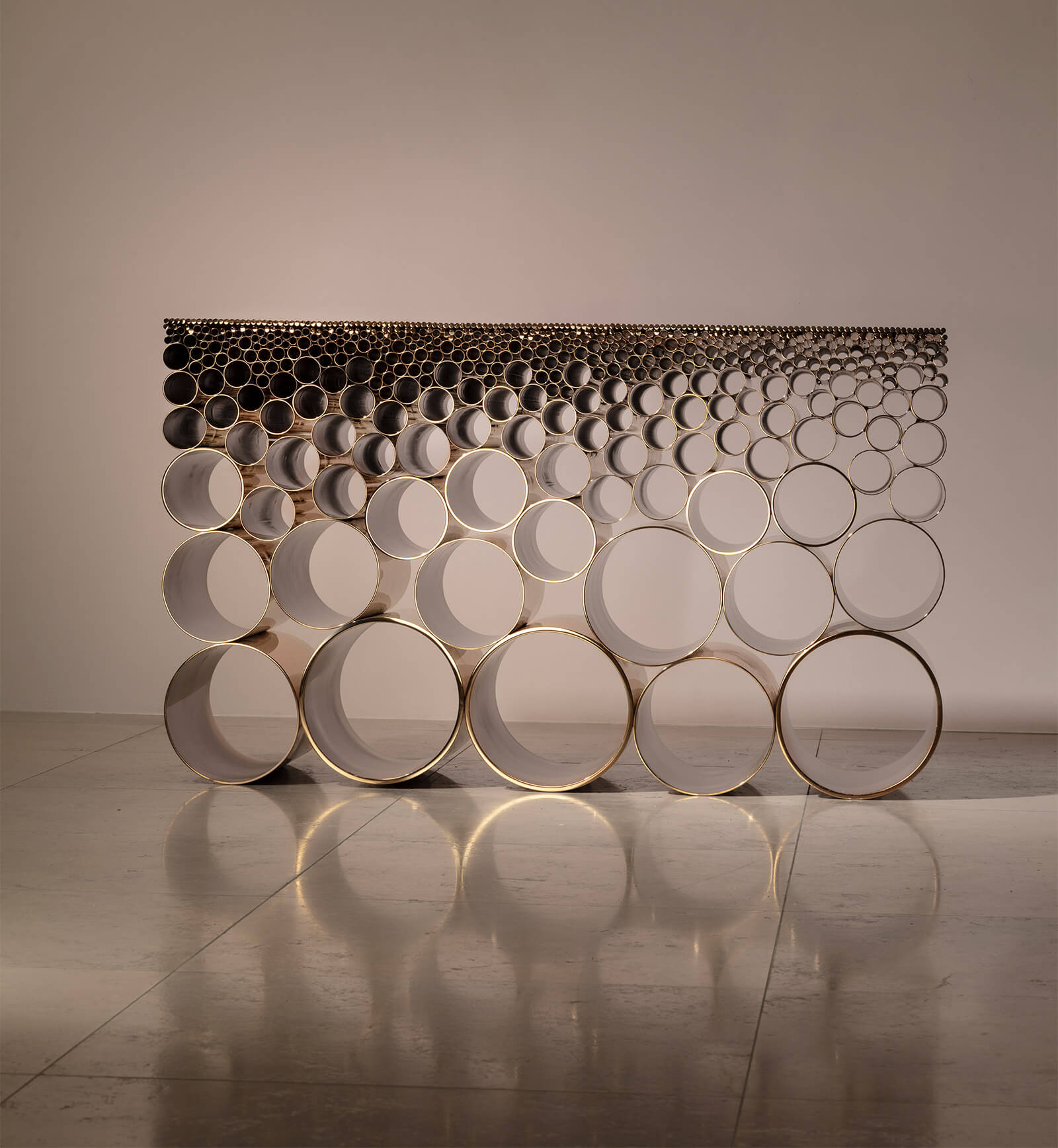 There is a kinetic effect to the ‘Casino’ lamps, their bronze circles reminiscent of Vasarely – a retrospective of whose work was at the Centre Pompidou last year. Van der Straeten’s penchant for geometry also underpins the ‘Juliette’ and ‘Zebrette’ tables, with linear, grey-veined stone tabletops and angled bases made from combining ebony from Gabon and Mozambique and other woods. Another key piece is the ‘Spider’ wardrobe overlaid with lines of nickel silver. 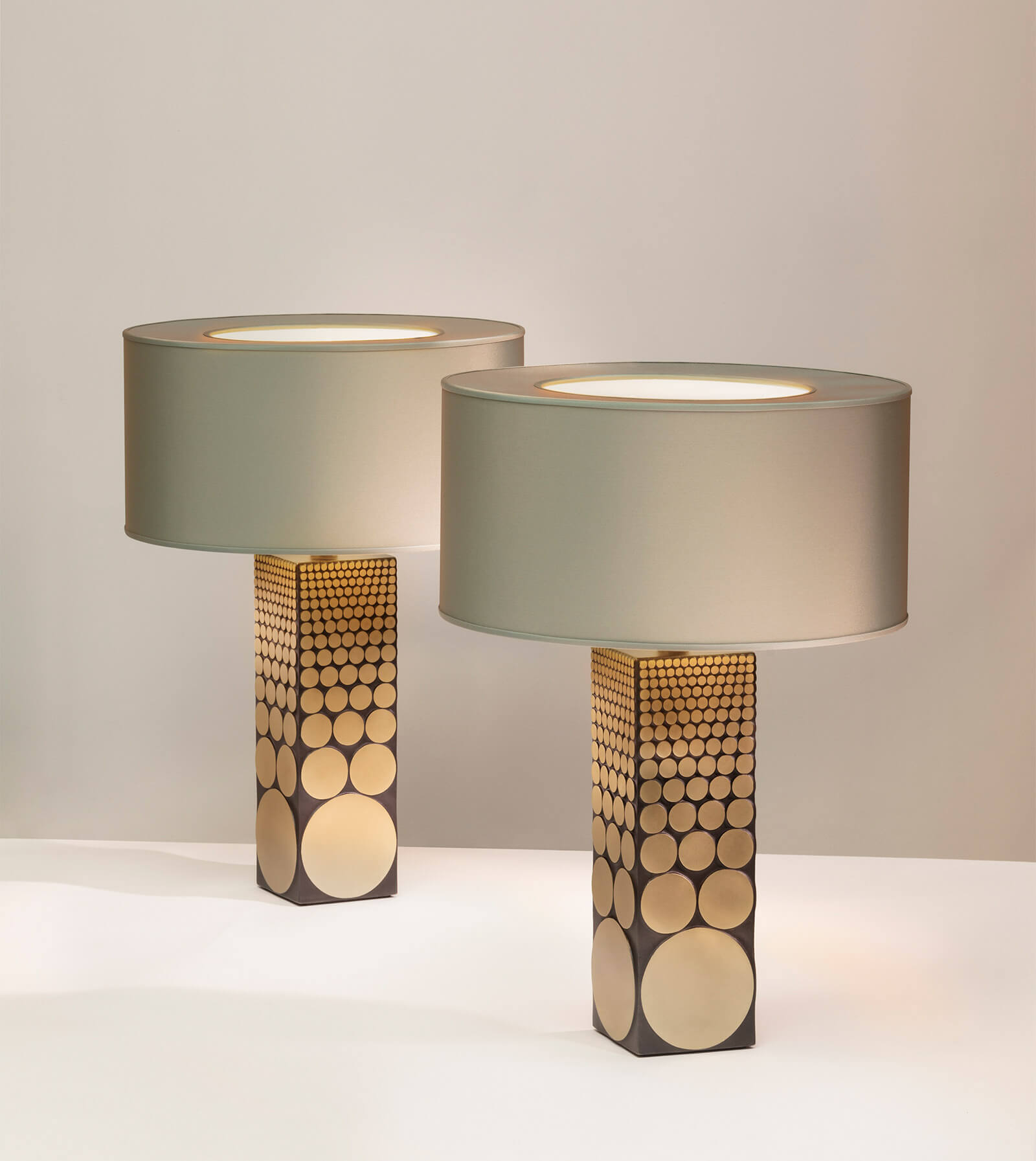 Besides his own work, Van der Straeten is exhibiting the artist duo Arotin & Serghei (Alexander Arotin and Serghei Victor Dubin). On display are their abstract, mural light compositions characterised by vertical lines of infinite colour that complement Van der Straeten’s visual language. Van der Straeten collects art and enjoys presenting artists’ work during his exhibitions and has previously shown, among others, the photographers Valérie Belin and Hervé Saint Hélier. 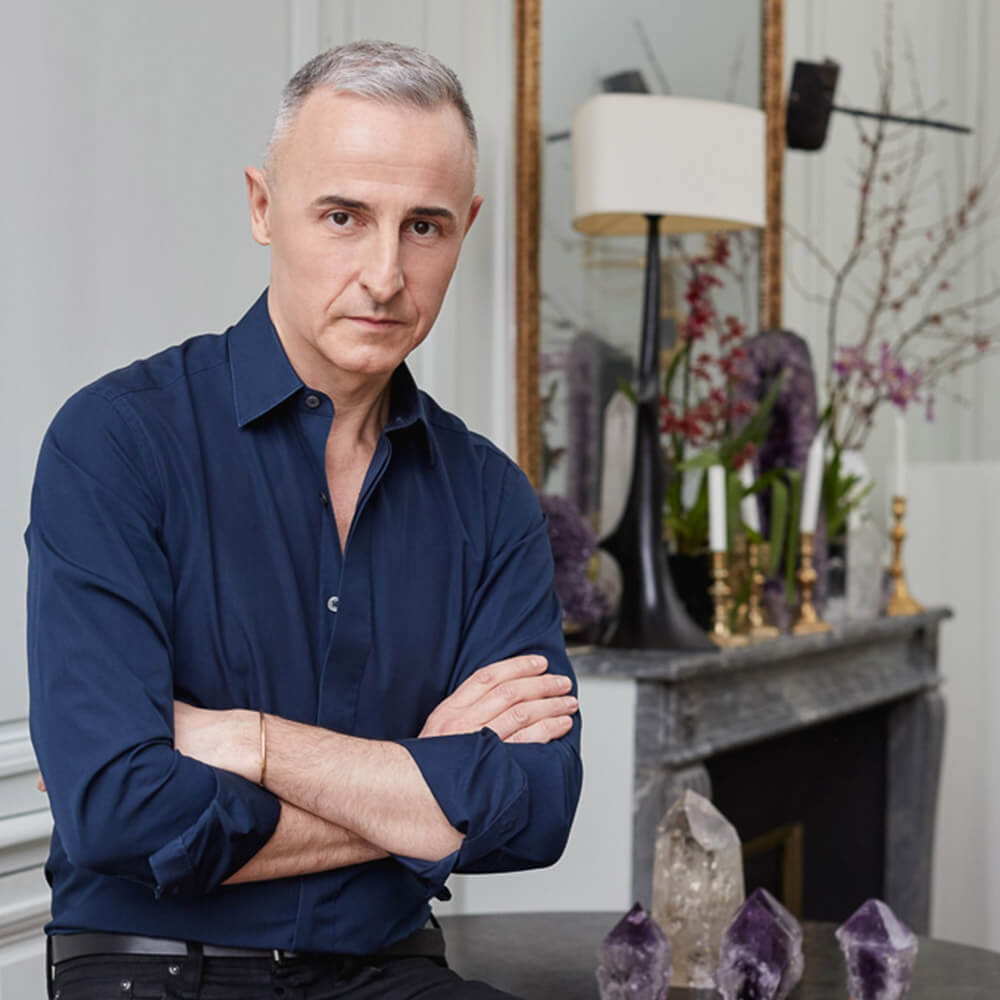 BORN IN 1965, Van der Straeten grew up in Paris, studied fine art at the École nationale supérieure des beaux-arts and first designed jewellery. This briefly led to product design, including Dior’s ‘J’adore’ fragrance bottle and Guerlain’s ‘Kiss Kiss’ lipstick tube. His early furniture pieces were more ornate in style; among them is the ‘Miroir Nid’ (2000) – a round mirror surrounded by bronze branches that is included in the ‘10,000 Years of Luxury’ exhibition at the Louvre Abu Dhabi, until 18th February 2020.

After initially showing his work in galleries, Van der Straeten opened his own space in order to have unbridled autonomy and not risk being influenced by other people’s opinions. “Before, I had things at one person’s place and another person’s and thought that the visibility of my work wasn’t necessarily right,” he says. That said, Van der Straeten does enter into collaborations: Galerie Karsten Greve is presenting his work in Saint-Moritz, Switzerland (8th February – 12th April), and Belgium’s Galerie Flore is showing some of his pieces at TEFAF in Maastricht in March. 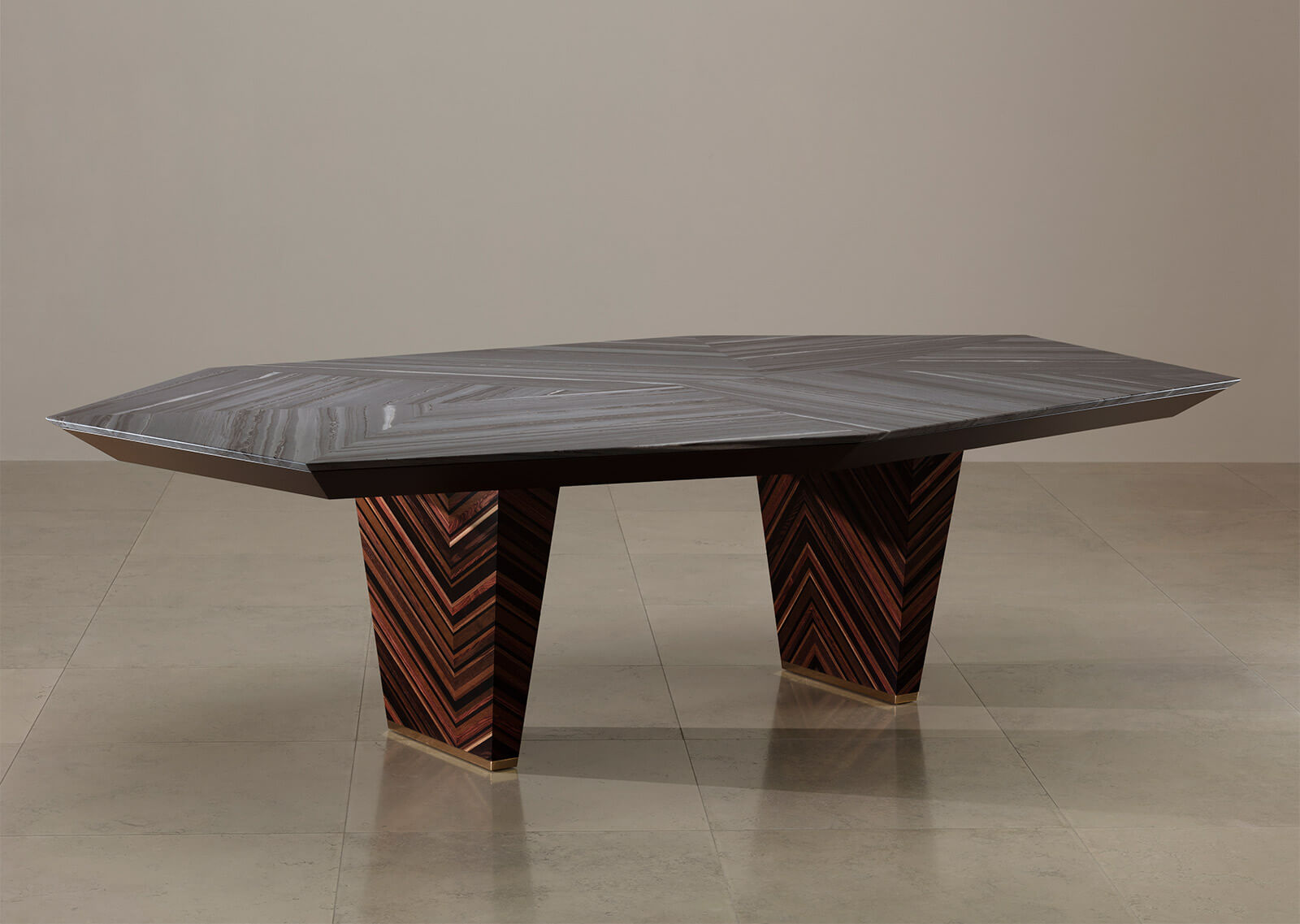 Van der Straeten readily admits that he is “a control freak”. The trait extends to him handing precise drawings with exact measurements to his team to develop on the computer, before making maquettes. This resolutely independent mindset has led him to self-exhibit at PAD London. He has also designed furniture for Roger Vivier, Christian Dior and Fendi’s boutiques. And the Musée des Arts Décoratifs in Paris and the Mobilier National (France’s national furniture collection) have acquired pieces of his work; the latter has used some of his lights at the culture ministry.

“In the space of a few years, he has managed to conquer his own place and [develop] his own, contemporary style,” Yves Badetz, head of artistic production at the Mobilier National, says. “He embodies this generation of artists who came of age in the 1980s and that has understood the medium of metal to be a vehicle for a form of timeless modernity.” 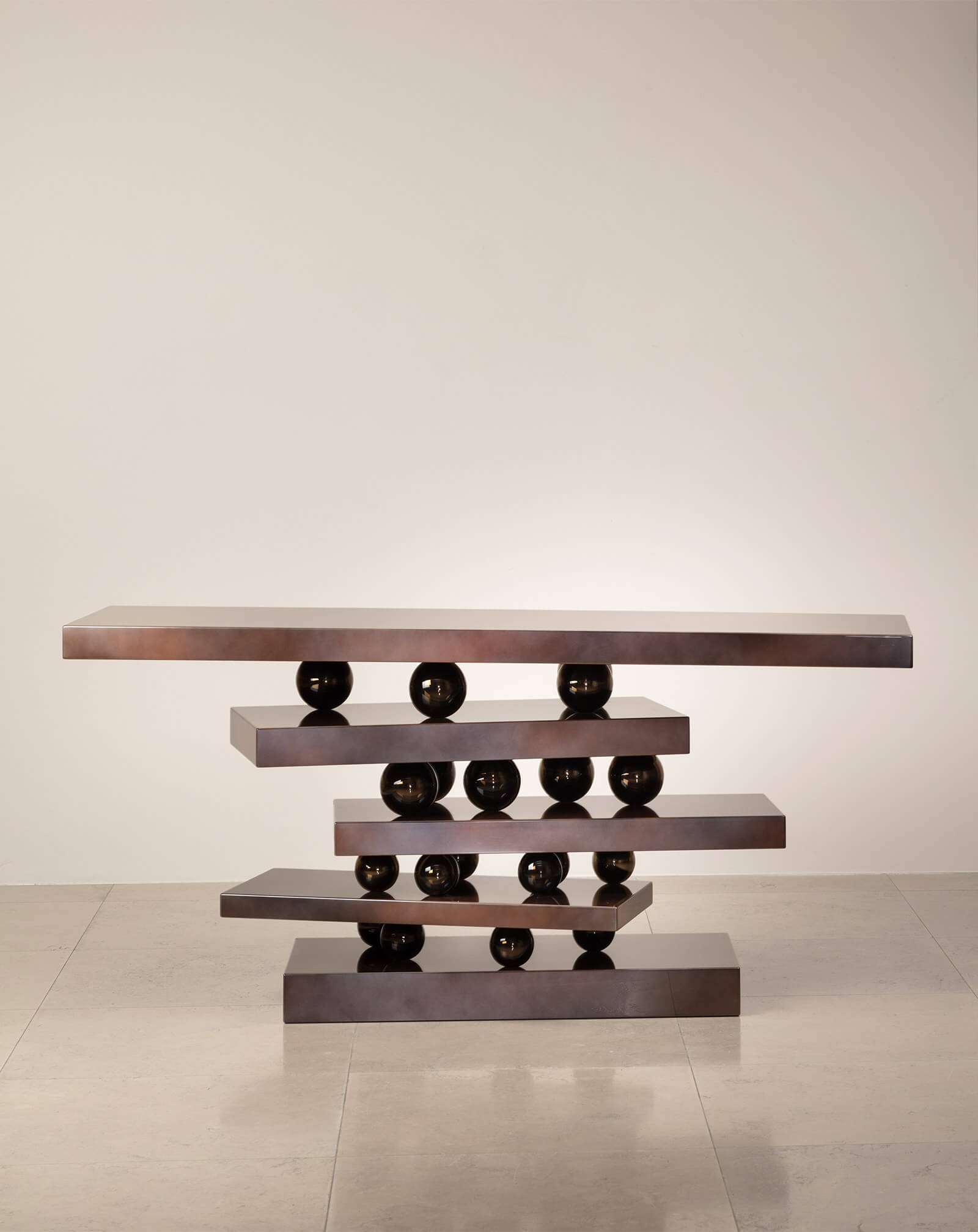 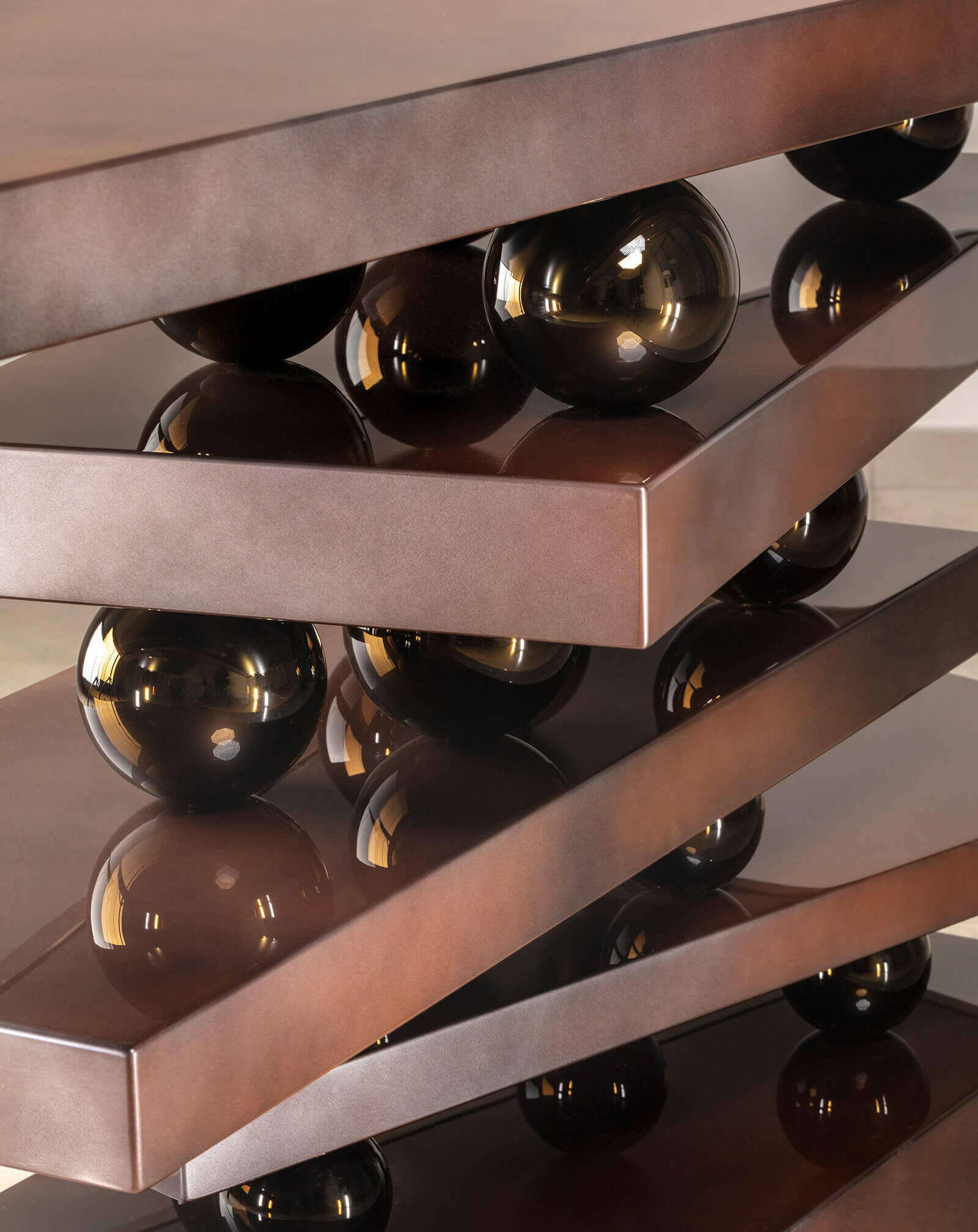 “One has the impression of something very simple, but actually it’s quite complex and technically difficult”

Cécile Verdier, head of Christie’s France (which sold Van der Straeten’s ‘Épines’ table, designed in 1999, for €31,250 in November), is seduced by the mastery of metal and “aerial design” of his large-scale hanging lamps. “One can detect his knowledge of jewellery, the intertwined rings giving the lightness of an earring to a hanging light – but simply interpreted in other dimensions,” Verdier says.

What does Van der Straeten think of the burgeoning collectible design market? “It’s great when it exists and everyone benefits from this appetite,” he replies. “But if there’s another economic crisis, it will all calm down. In 2008, there was quite an important rectification of this enthusiasm. What remains is what’s solid after the craziness of the moment about [wanting something] now, immediately.” 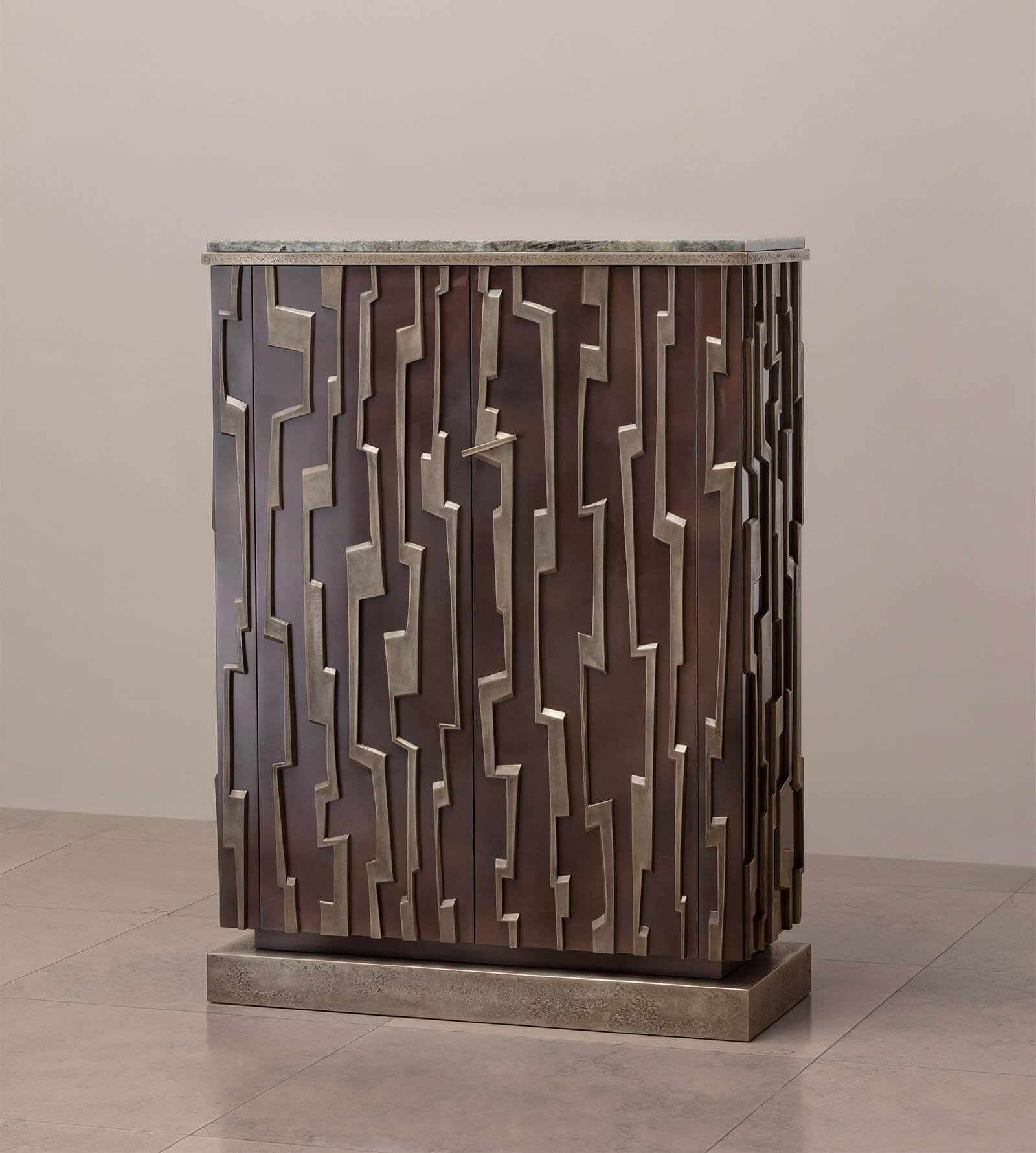 Having weathered the 2008 storm, Van der Straeten has steadfastly gained a following. “Young designers come and tell me: ‘Oh, you’re like our grandfather. We’ve been looking at what you do for years and it inspires us’,” he says, chuckling. 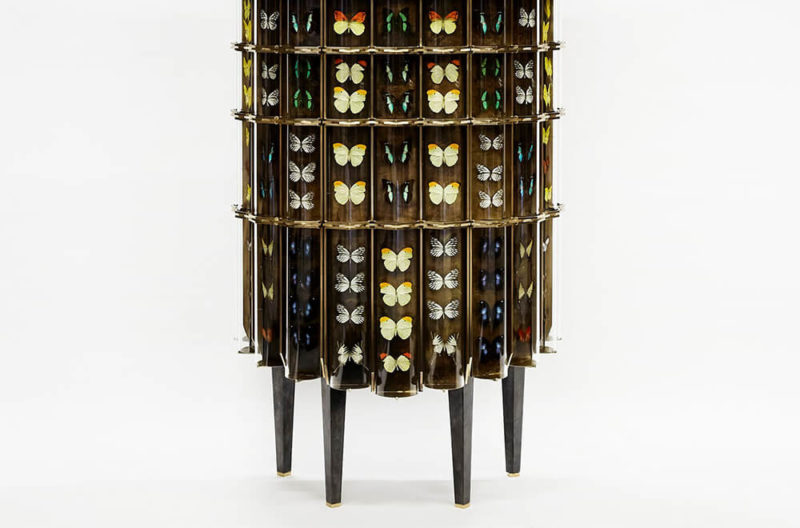 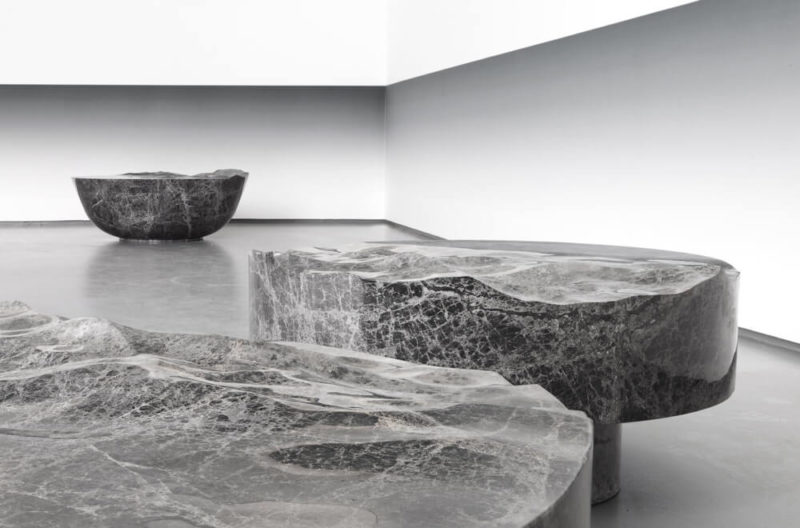 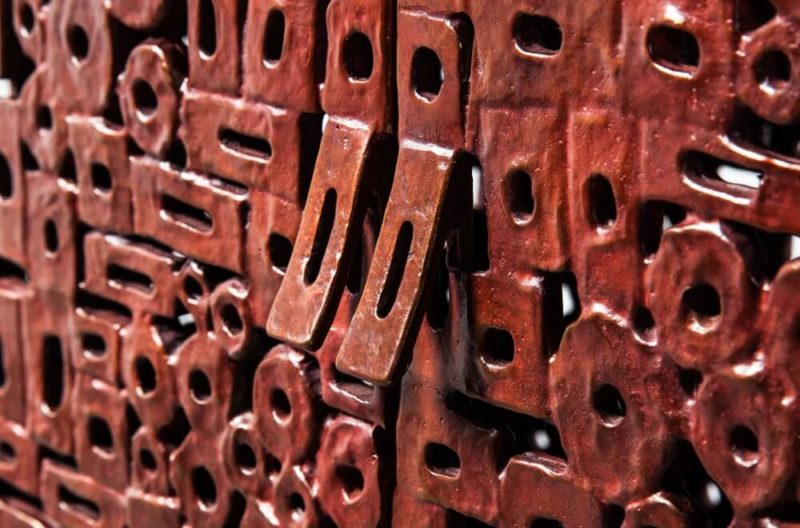 By Lucia van der Post
The Design Edit
For Collectors and Dreamers
Read
Connect
Legal
© 2023 The Design Edit.
All Rights Reserverd
We use Actito as our marketing automation platform. By clicking to submit this form, you acknowledge that the information you provide will be transferred to Actito for processing in accordance with their Privacy Policy and Terms. The Design Edit will use the information you provide on this form to keep you informed with announcements and updates. You can change your mind at any time by clicking the unsubscribe link in the footer of any email you receive from us. We will treat your information with respect.