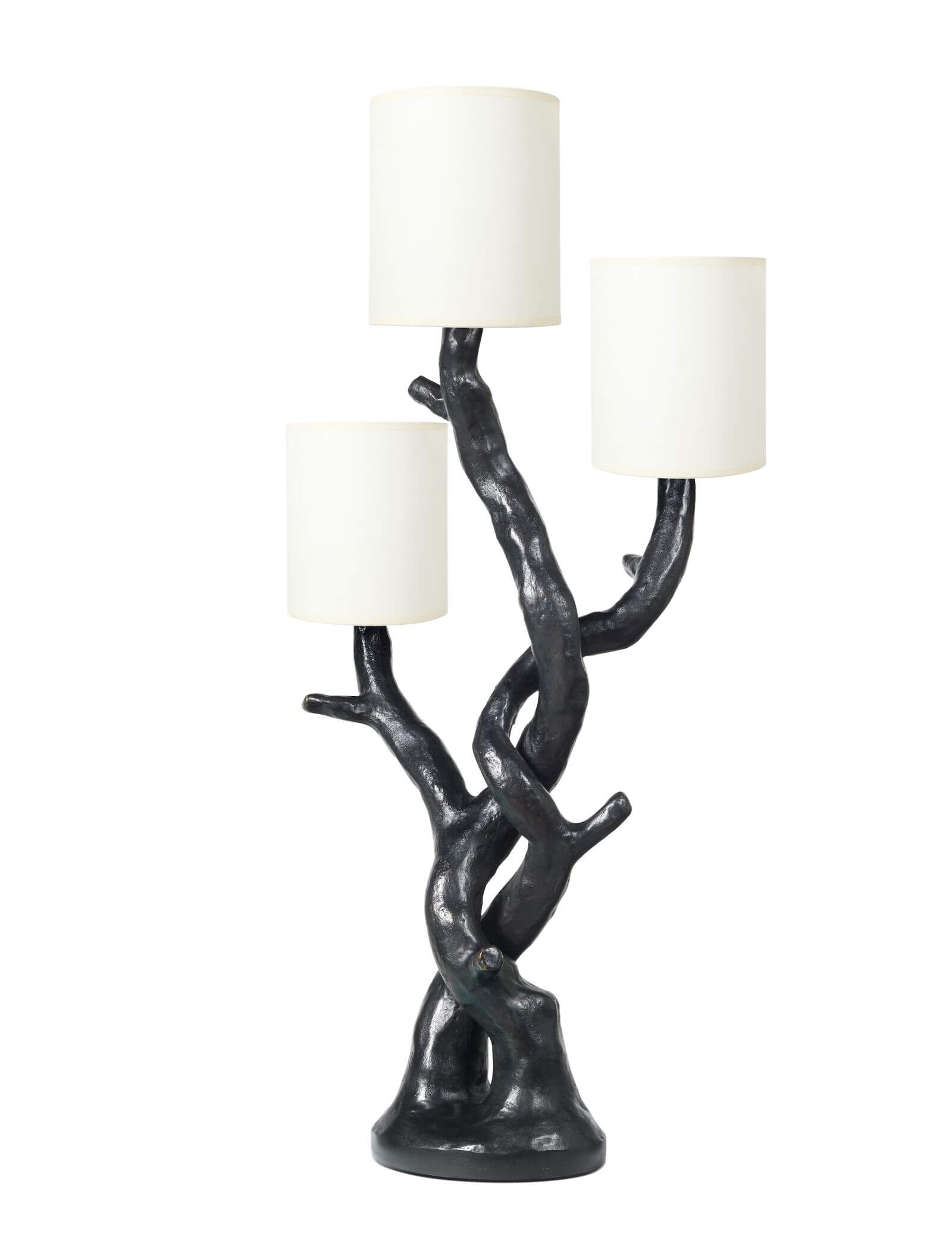 THREE GENERATIONS OF European artists and designers are showcased in exhibitions in the French capital this month. The Design Edit takes you to Tools Galerie in the Marais for the début of emerging Belgian designer Arnaud Eubelen, who excels at upcycling found materials; then on to a poetic show featuring Mattia Bonetti, Éric Schmitt and Éric Jourdan at En Attendant les Barbares on the Left Bank, before heading out to Italian maestro Michelangelo Pistoletto’s countryside exhibition at Galleria Continua – almost like a museum-scale retrospective in terms of scope and quality. 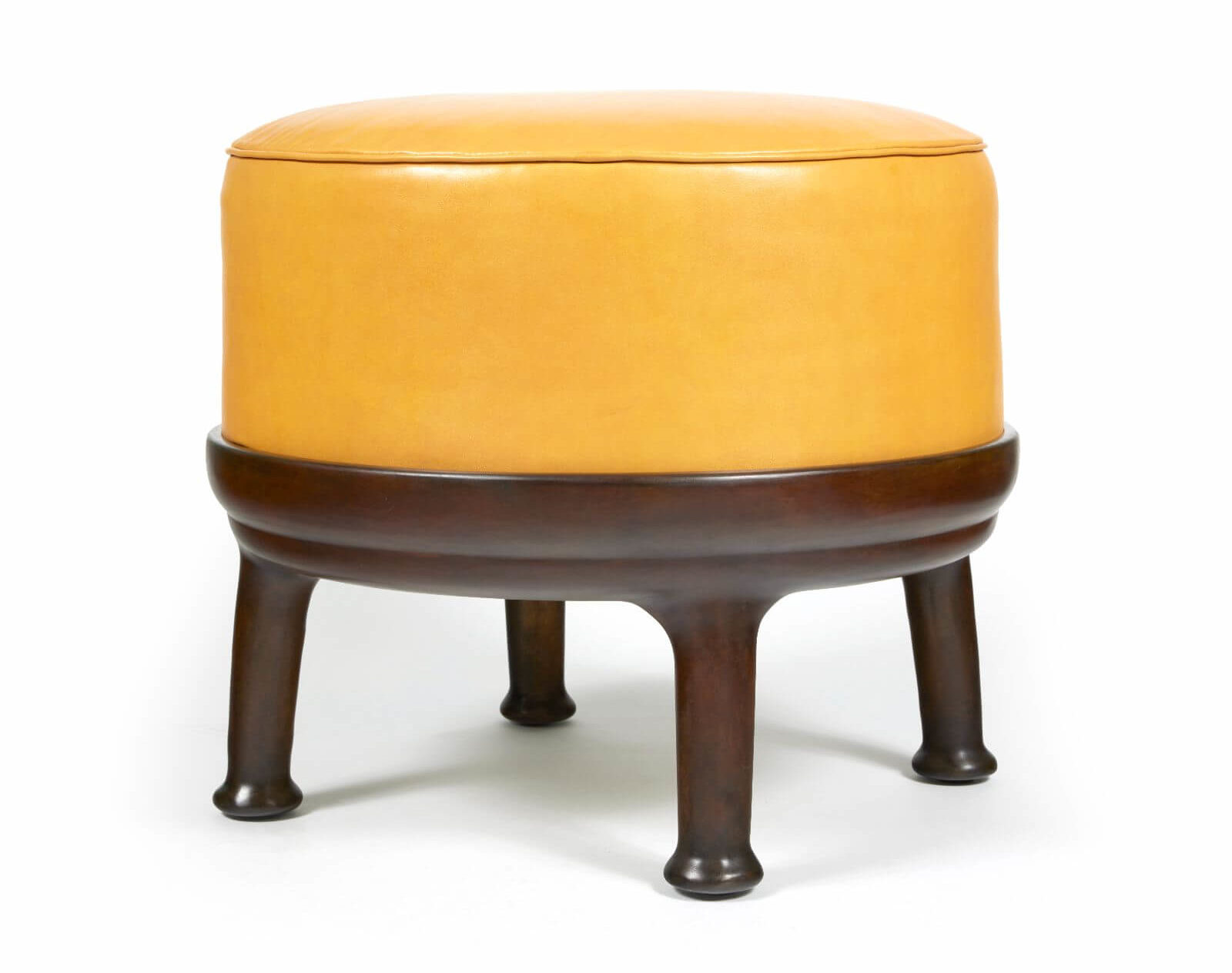 ‘Arnaud Eubelen: Night Street Walks’ – Tools Galerie
“The street is like a hardware store for me,” declares Belgian designer Arnaud Eubelen at the opening of his solo show, ‘Night Street Walks’, at Tools Galerie. “Near my atelier there are lots of things that people throw away. I try to highlight these discarded elements by assembling things based on what I’ve seen in everyday life in the city.” 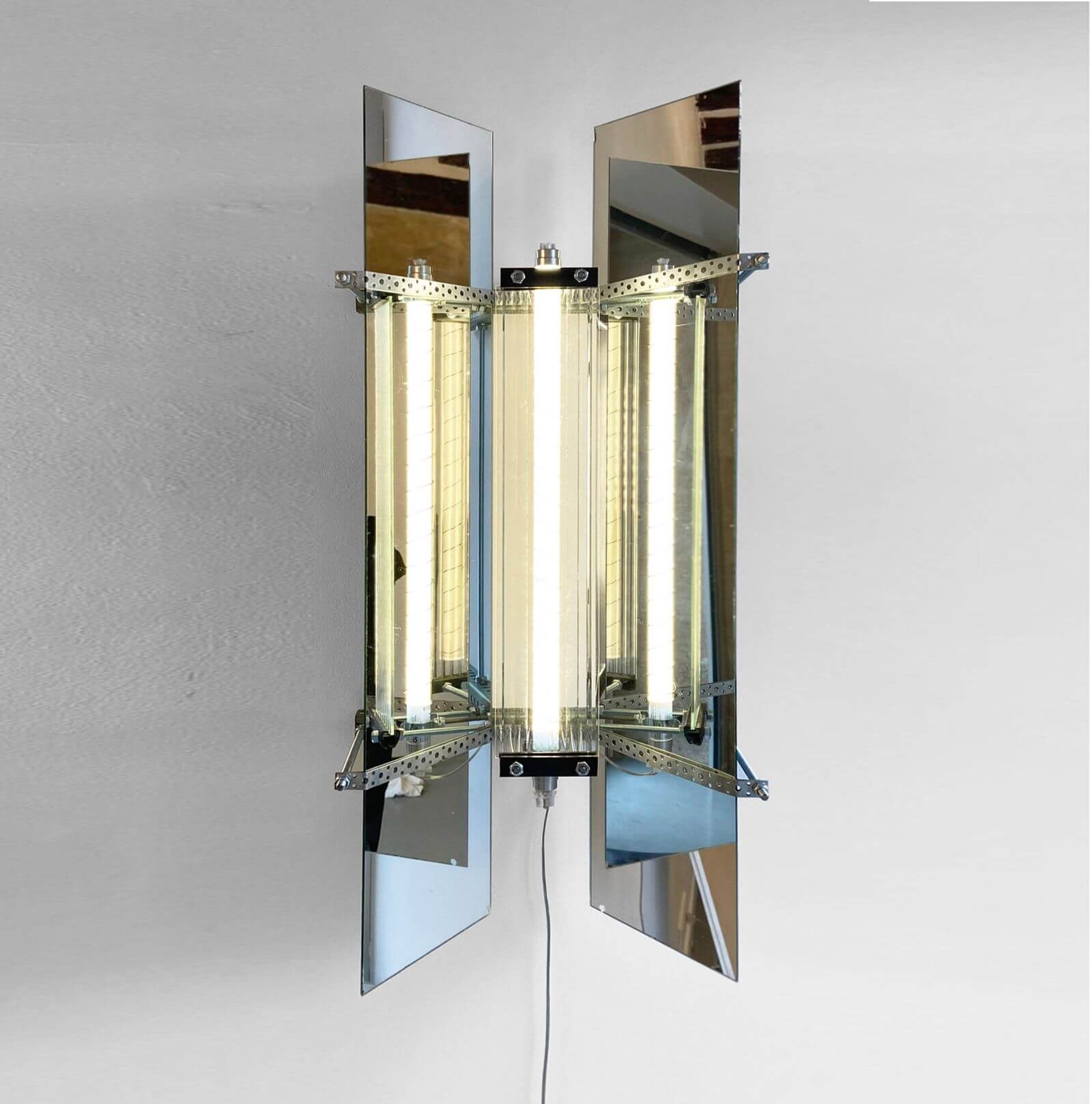 Born in Liège in 1991, Eubelen has a studio in Molenbeek, a rundown district of Brussels that has long been an artists’ haunt. “There are 15 artists with studios in my building,” says Eubelen, who has previously exhibited at the Collectible fair and Victor Hunt’s gallery, both in Brussels. 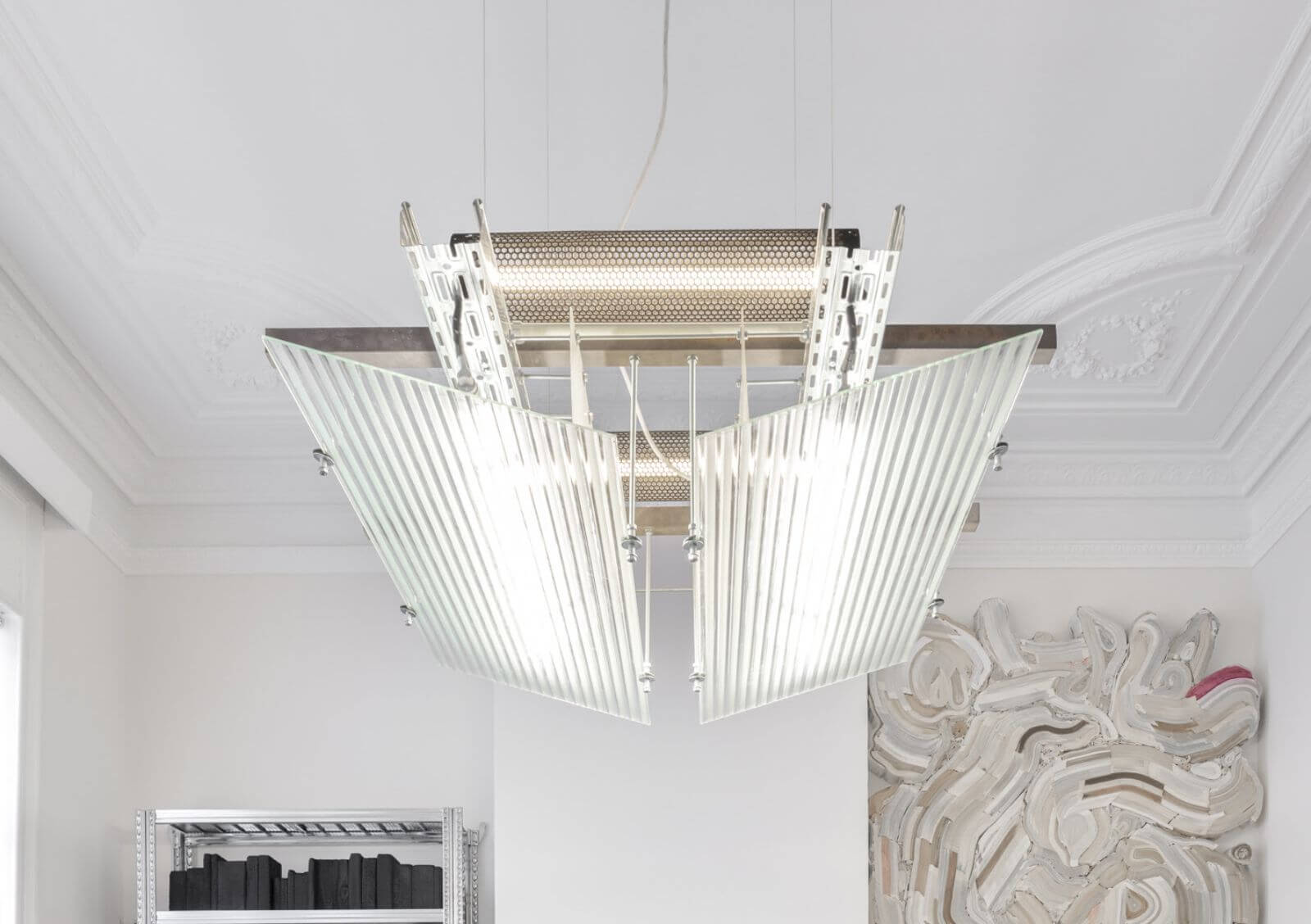 “My atelier has a series of shelves where I arrange things according to type: metal, glass, wood and plastic,” Eubelen recounts. “When I pick up the materials, I don’t know what I’ll create with them – it’s very visual and experimental. There are two important things for me: finding and cutting in order to make an object that seems camouflaged by time.” 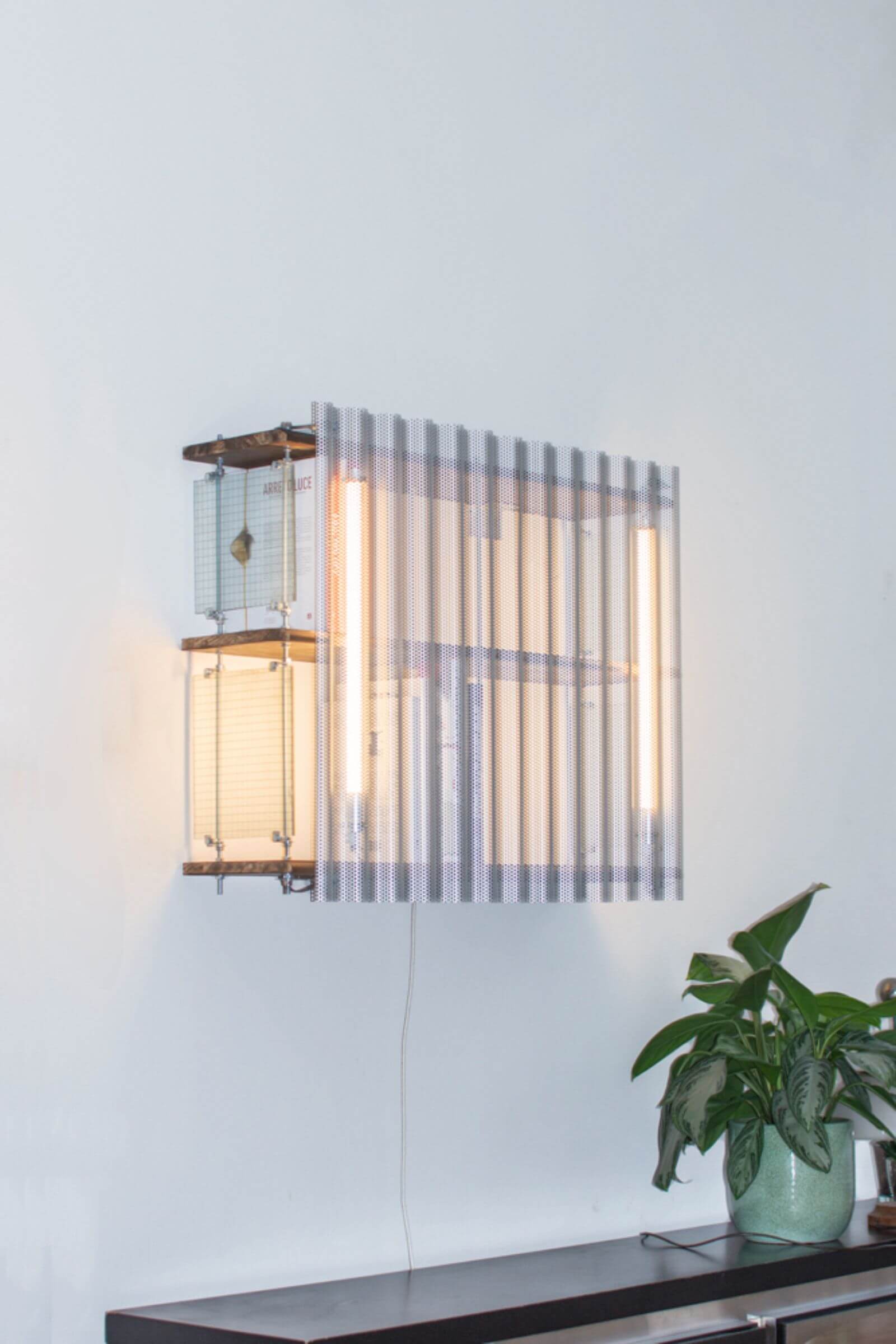 On view here is a series of light sculptures with abstract, minimalist qualities, masterworks in the art of assemblage, upcycling and the vernacular. A red flame diffused behind frosted glass, screws, iron rods and curtain rail elements has a mystical quality. The piece, which Eubelen regards as “micro-architecture”, was inspired by the electric candles in countryside chapels that passers-by can glimpse whilst peering through the windows when the chapels are closed. Other unique pieces made from gratings and various industrial elements evoke the fleeting impressions of the interiors of urban homes that one might meander past on an evening stroll. 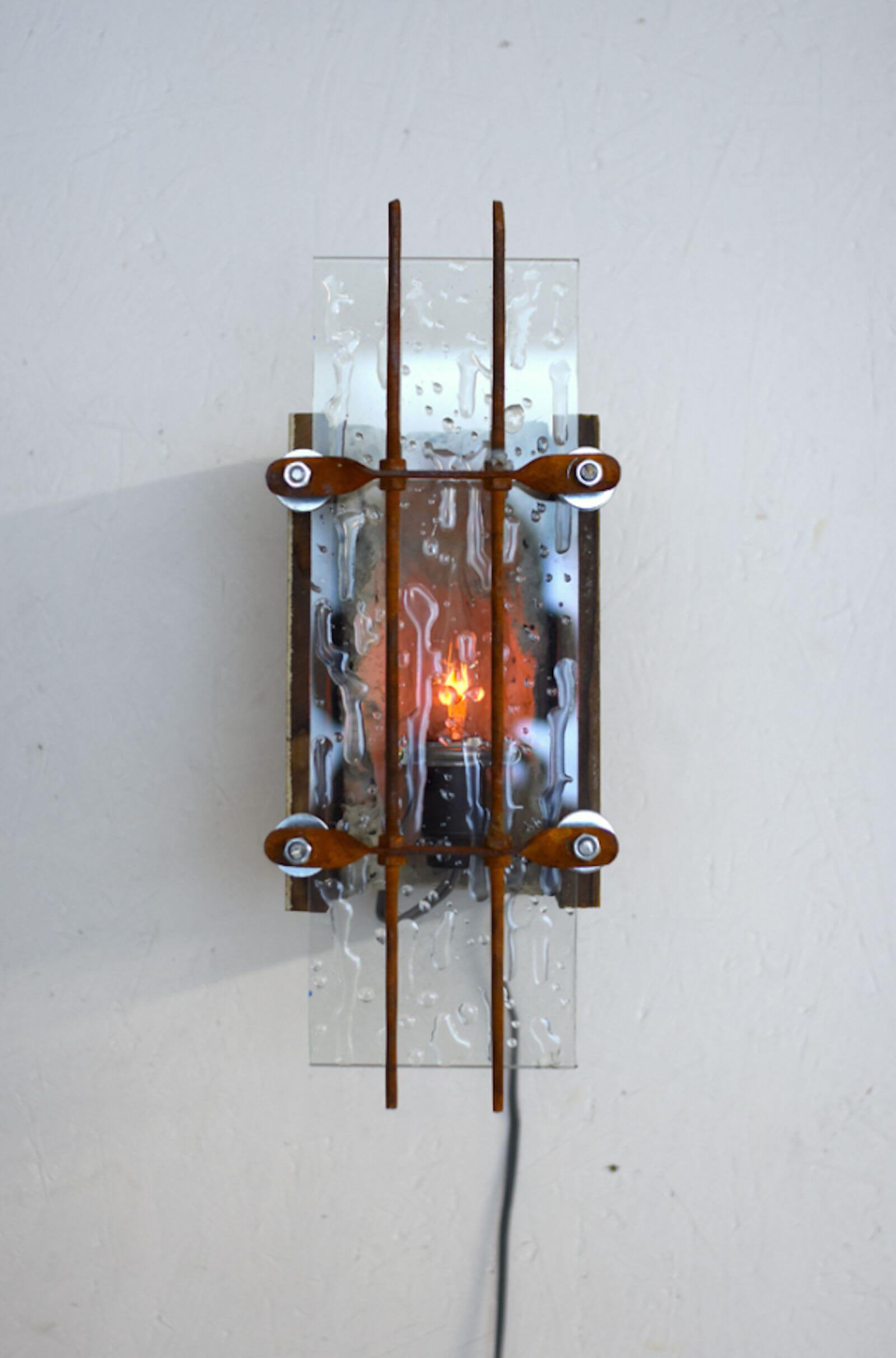 ‘Fantasmagories’ – En Attendant les Barbares
When Agnès Kentish founded her gallery En Attendant les Barbares (‘Waiting for the Barbarians’) with Frédéric de Luca in the 1980s, her vocation was to produce furniture and lamps full of imagination and poetry. Back then, the terms ‘collectible design’ and ‘functional sculpture’ were yet to be coined, but Kentish already had a firm commitment to producing pieces in small series that extended beyond utility. Four decades on, this desire to champion individualised, handcrafted work still drives her. 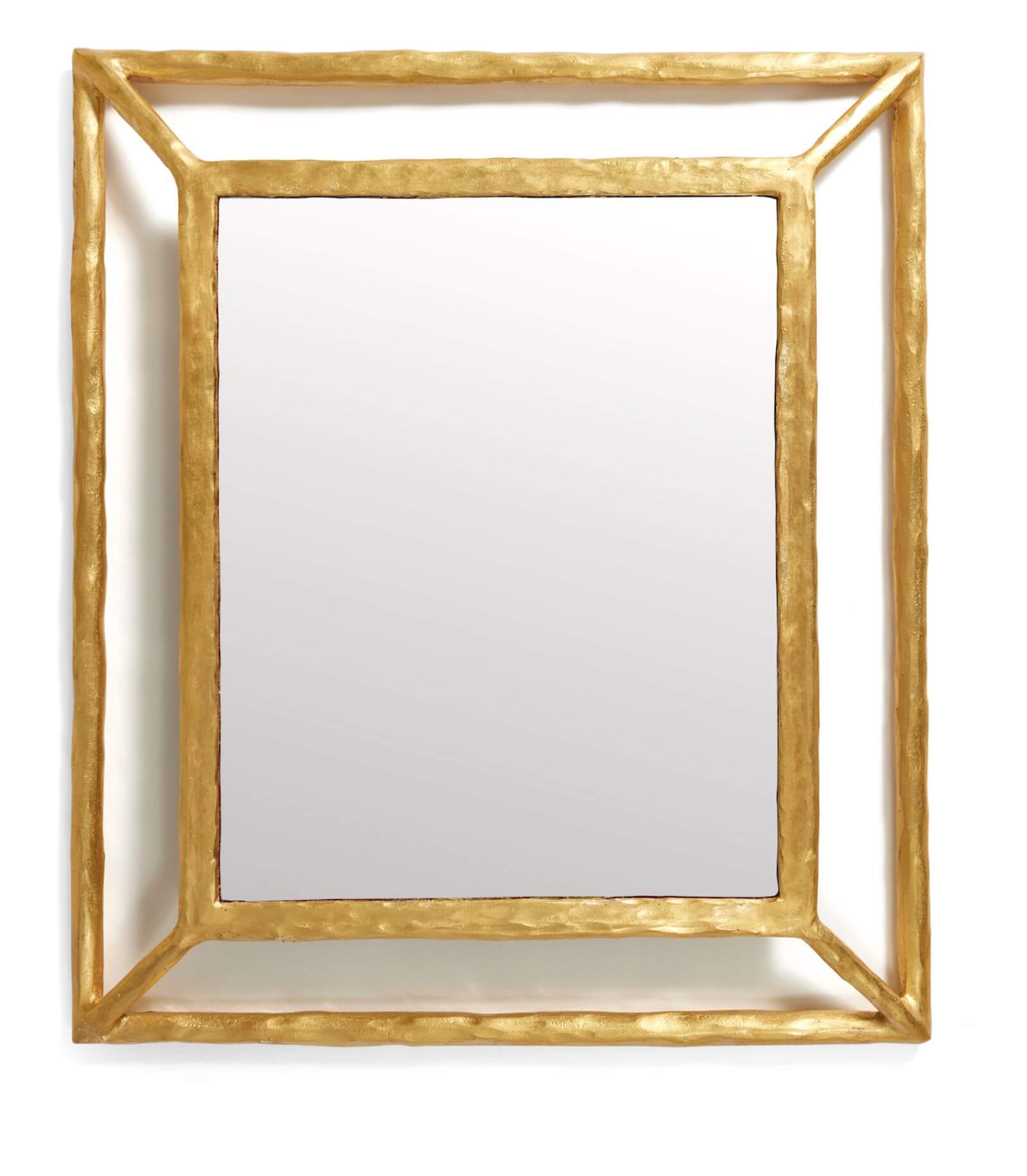 The latest exhibition, ‘Fantasmagories’, brings together new works by Mattia Bonetti, Éric Schmitt and Éric Jourdan that all reflect the unique sensibilities of their makers and reveal, in their artistry, the hand of the craftsman. 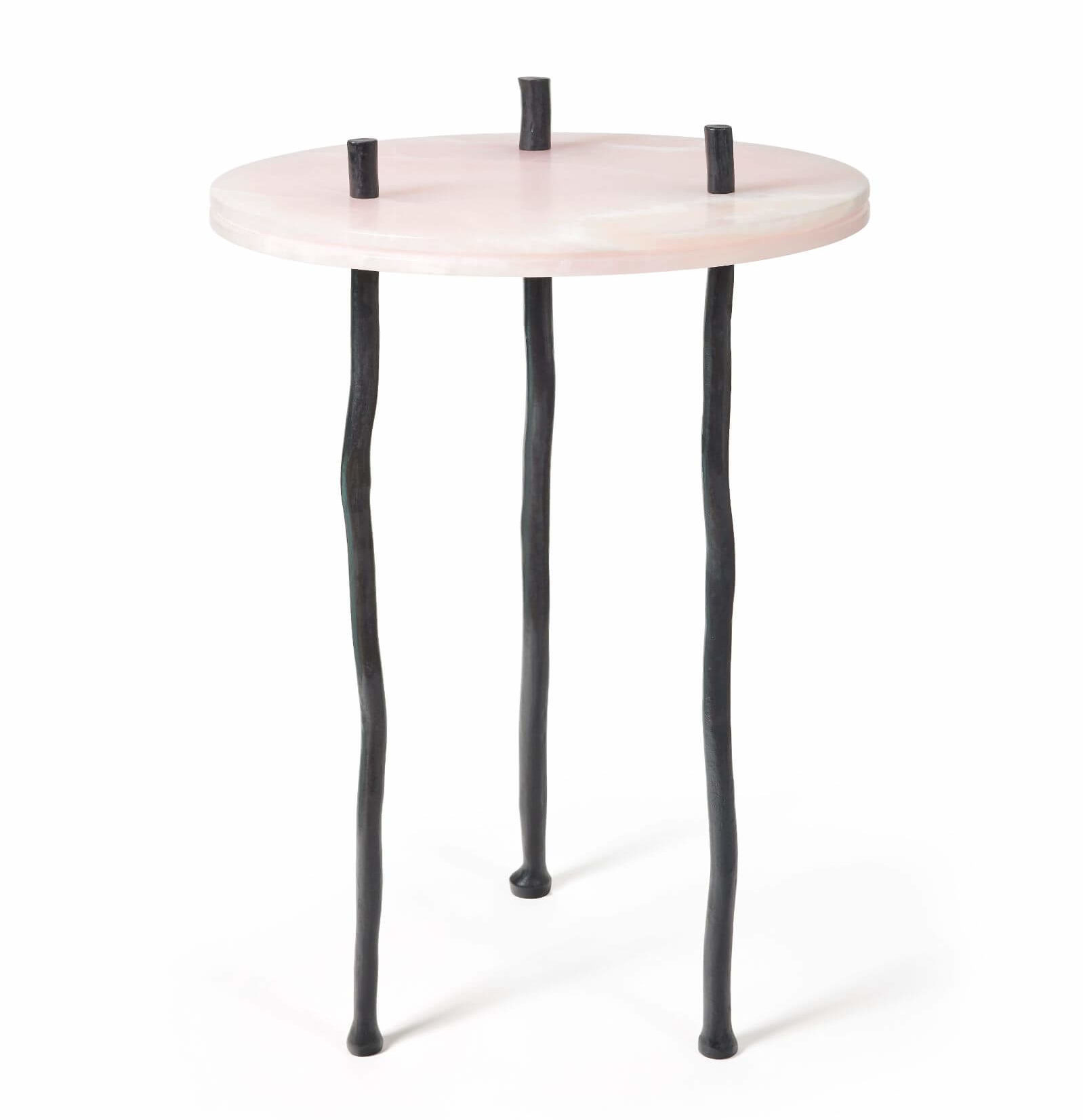 Kentish was instrumental in launching the design duo Garouste and Bonetti, which Bonetti formed with Élisabeth Garouste in the 1980s. Since the duo parted in 2001, Kentish has been supporting them separately. Among Bonetti’s new works are ‘Lampe Washington Square’ and ‘Console Washington Square’ (2022), both formed from twisting black patinated bronze trunks, and ‘Guéridon Boy Scout’ (2021), a double-layered pedestal table with spindly branches for legs. Bonetti is clearly inspired by Diego Giacometti, with one of whose artisans he once collaborated. Also on display are Bonetti’s round and square mirrors, the hand-forging of the iron still perceptible through the gold leaf adornment. 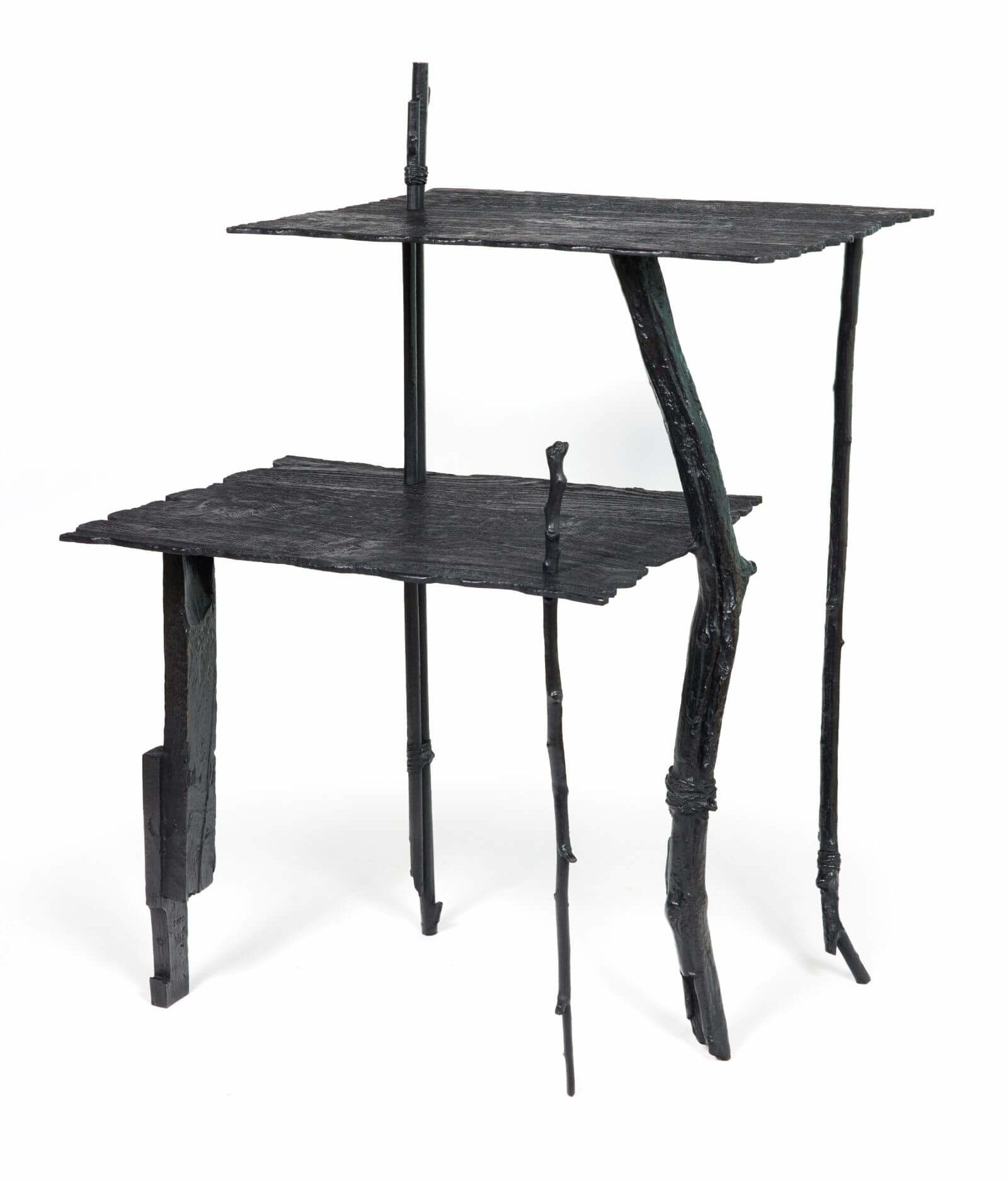 In perfect harmony with Bonetti are works of Schmitt such as ‘Guéridon Onyx’ (2021), an exquisite side table with three bronze branches piercing through a pale pink onyx surface, and ‘Fauteuil Ravello’, an armchair with curvy lines and circles of hand-forged iron forming the armrests. Captivating, too, is his ‘Miroir L’Amour en Cage’ (2022) – a mirror encased in four irregular cages of undulating iron, reminiscent of a grotto. 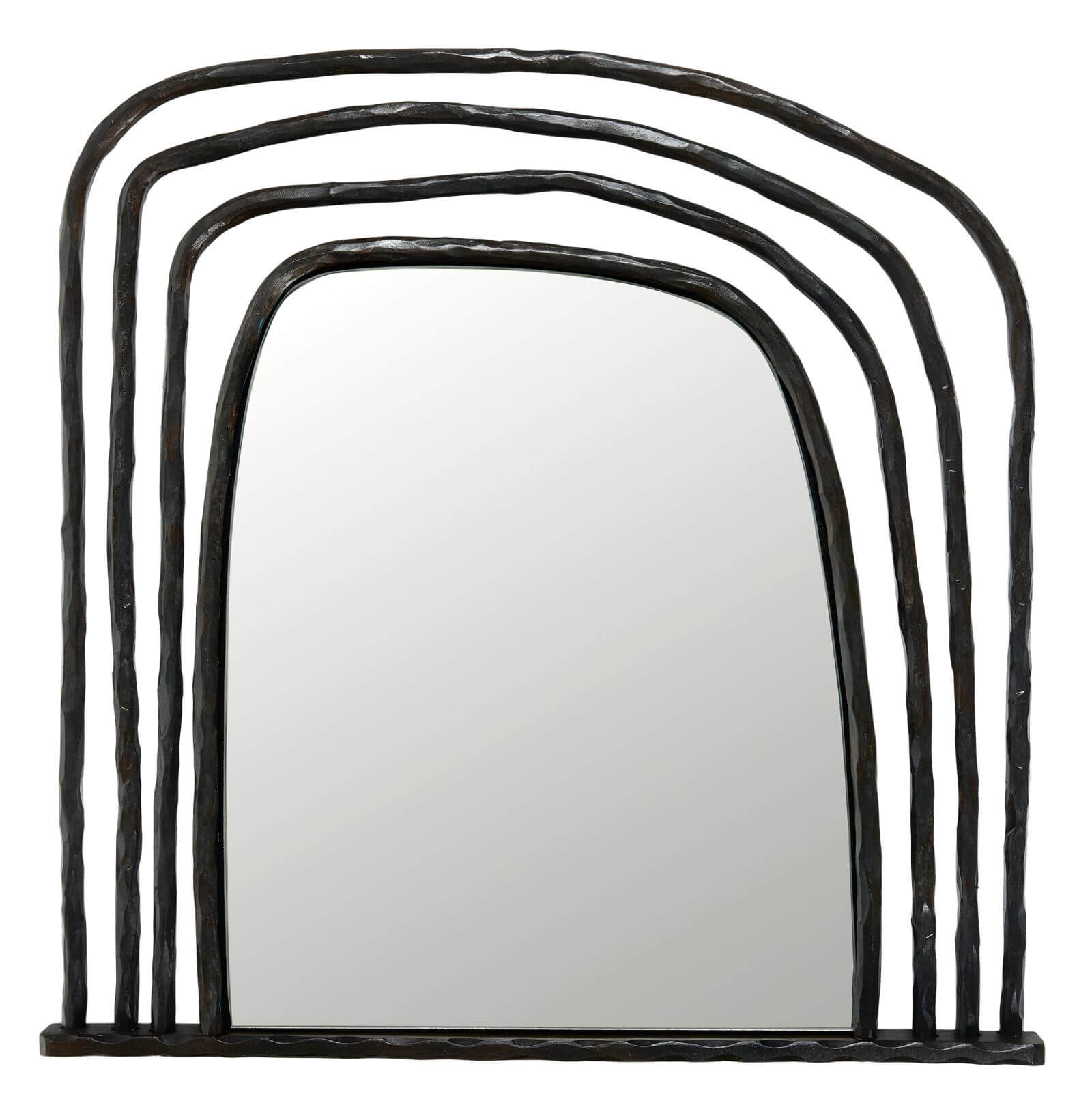 Jourdan is represented in the show through one sole piece: ‘Applique Belphégor’ (2022). Although it is exhibited as a jowly mask sculpture that brings to mind a line drawing, the gold leaf-polished bronze work can also be used as a wall light – circling back to Kentish’s original aim of presenting poetic works at the inception of her gallery. 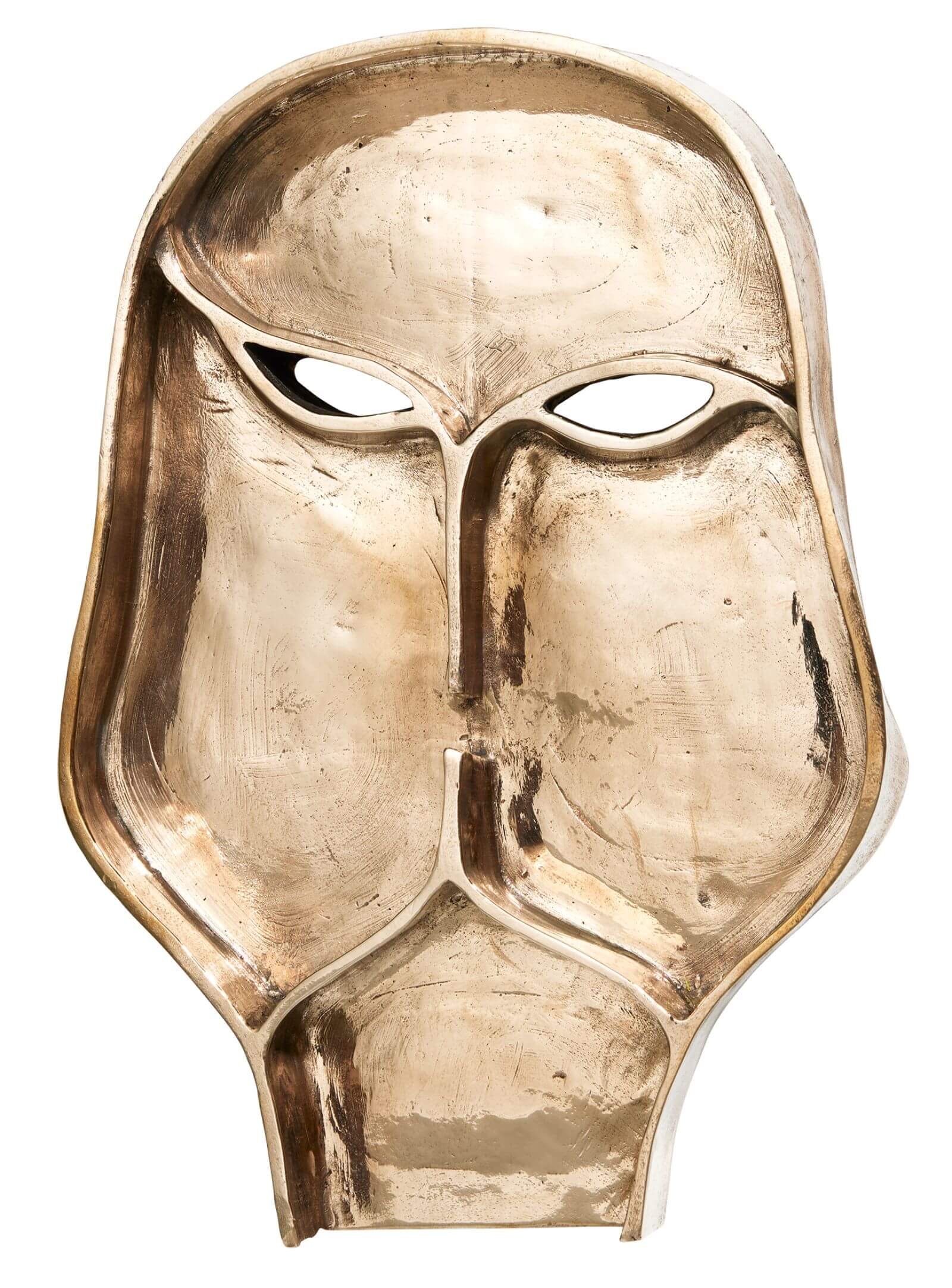 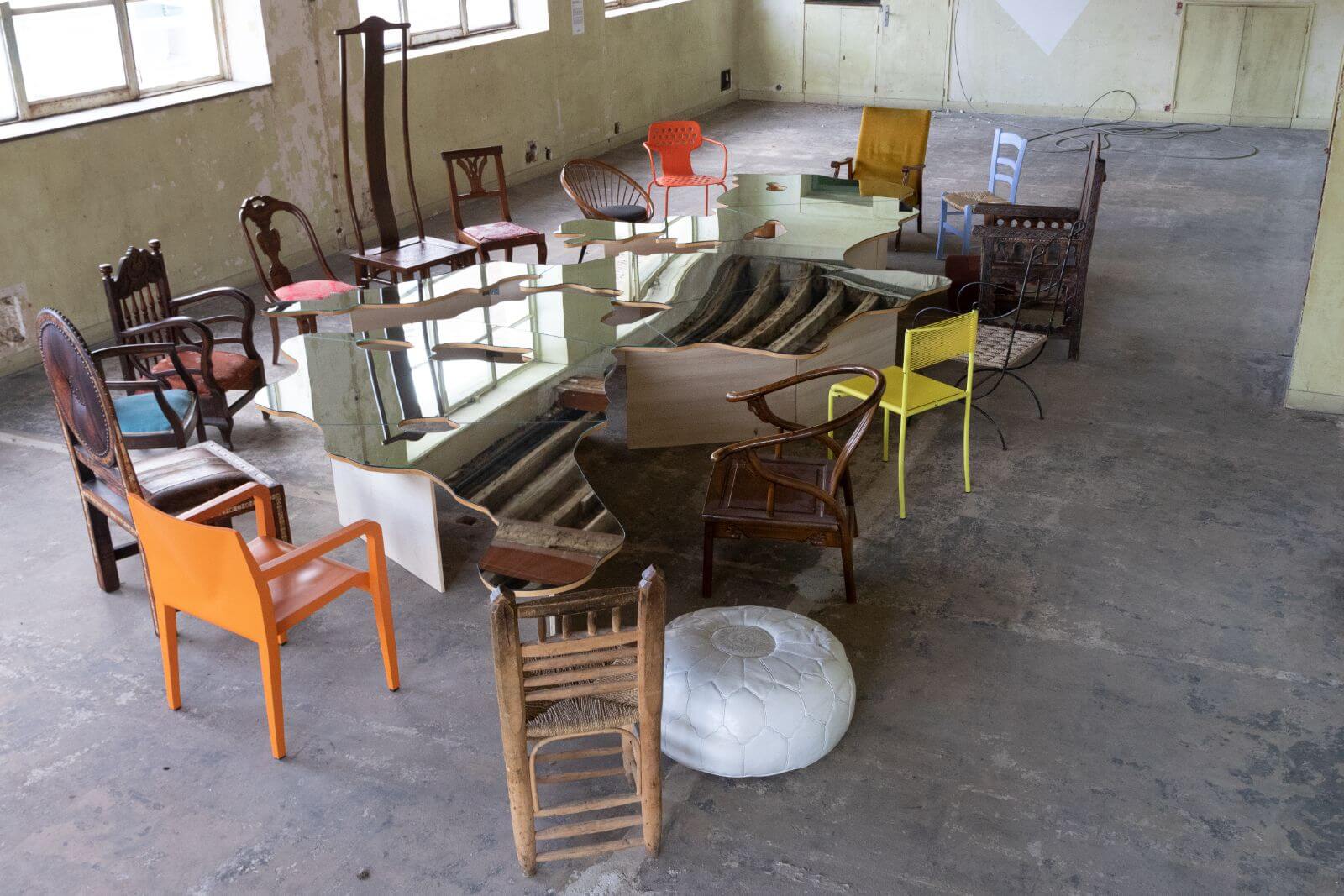 Pistoletto, 89, emerged onto Turin’s art scene in the early 1960s as a pioneer of Arte Povera – the name coined by Italian critic Germano Celant to refer to artists using modest materials in political works. The exhibition brings together seminal pieces, such as a newspaper sphere that Pistoletto rolled down the streets of Turin in a performance, and ‘Labirinto e Grande Pozzo’ (1969–2017) – a permanent cardboard labyrinth with a mirror in the centre – an allusion, perhaps, to disorientation and eternity.

Pistoletto also employs mirrors in ‘L’alto in basso, il basso in alto’ (1977) – an installation featuring an ordinary wooden chair on stilts towering over upside-down tables with mirrors on their undersides. One interpretation is that it could be read as a metaphor for upending social hierarchy. 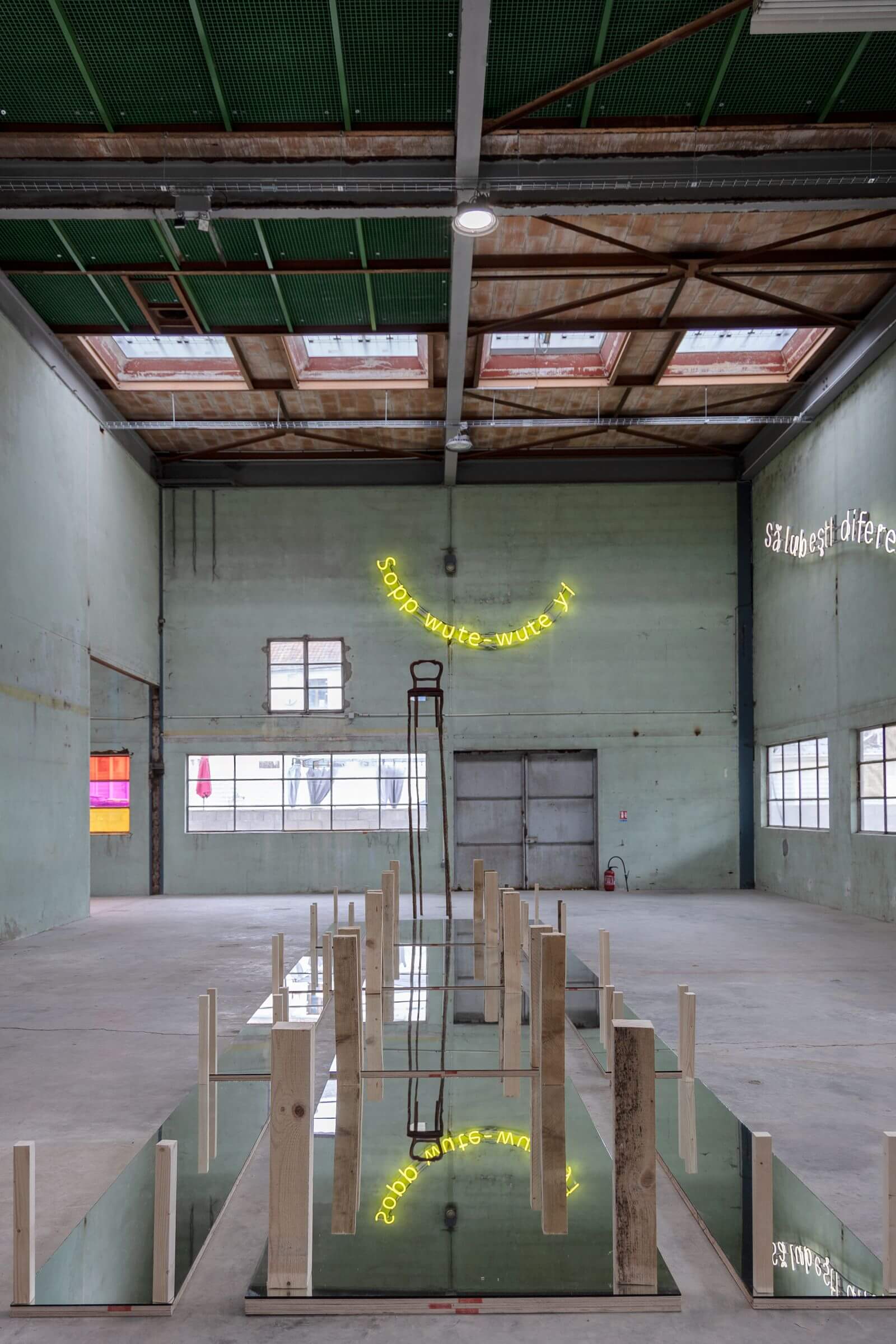 The concept of togetherness underpins many of the works. For instance, ‘Suspended Perimeter – Love Difference’ is composed of a series of mirrors in a circle, with, on the backs, phrases in various languages that all mean ‘love differences’. Indeed, Pistoletto – who was awarded the Golden Lion for Lifetime Achievement by the Venice Biennale in 2003 – has been making ‘quadri specchianti’ – figuratively painted mirrors – since the 1960s. 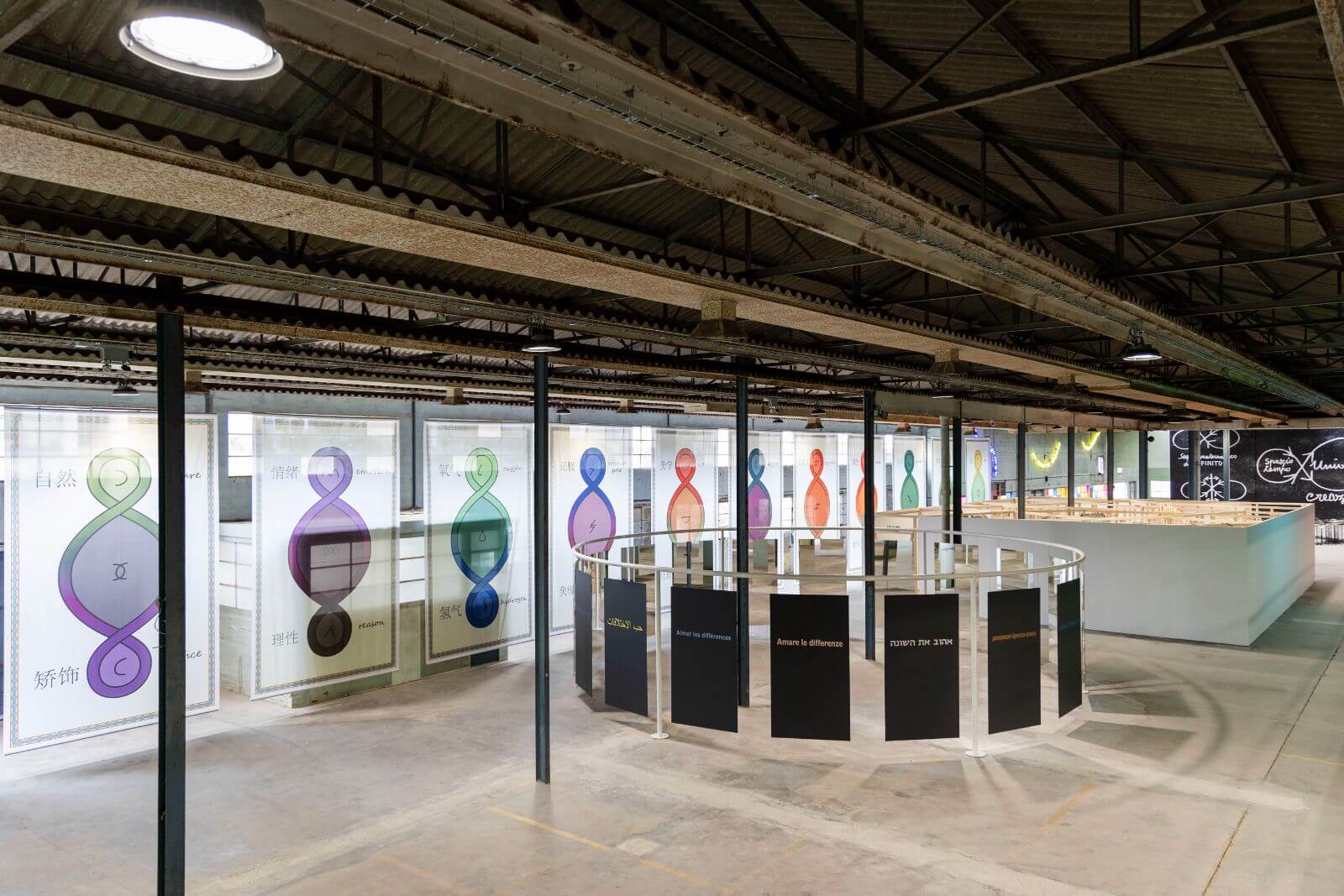 Along the nearby walls is a sequence of suspended works featuring Pistoletto’s ‘Third Paradise’ – a reconfigured infinity symbol about the balanced connection between the manmade world and nature. This theme of bridging the artificial and natural worlds also lies at the heart of Pistoletto’s Cittadellarte foundation in Biella, northern Italy.

This enveloping of cultural differences is evoked in the charming installation ‘Mar Mediterraneo | Mediterranean Sea’ (2003-2005), comprising a mirrored table in the shape of the Mediterranean Sea. The surrounding countries appear in the negative, empty space. Around the table is a motley crew of chairs in diverse materials, styles and eras, from a Chinese wooden armchair with carved, painted elements to familiar European, mostly twentieth-century designs. Again, another example of celebrating different identities and otherness. 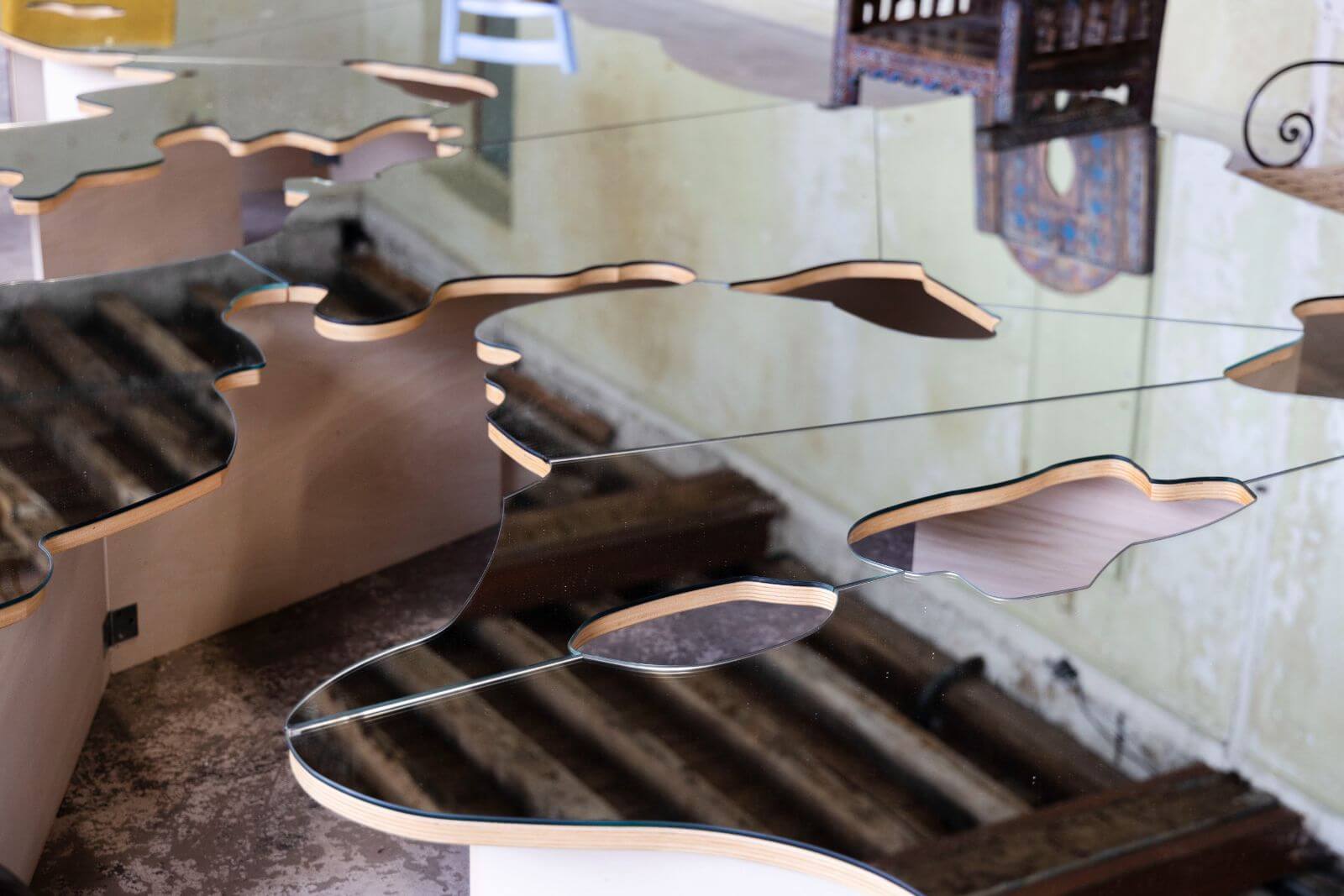 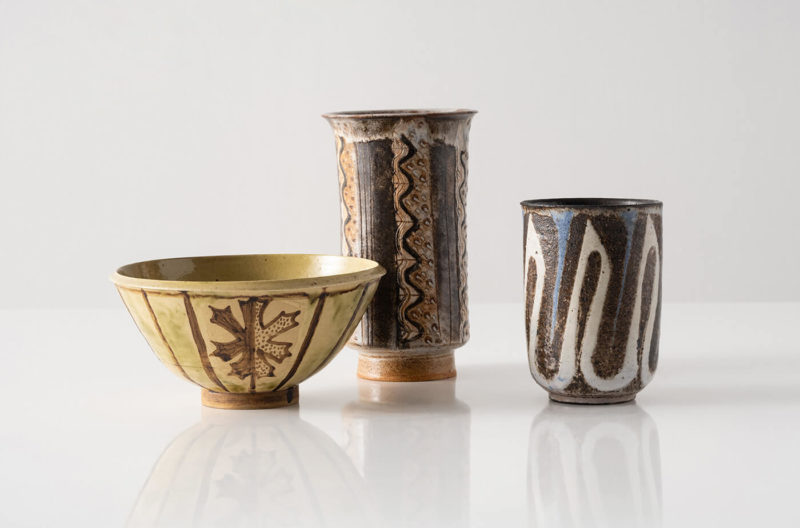 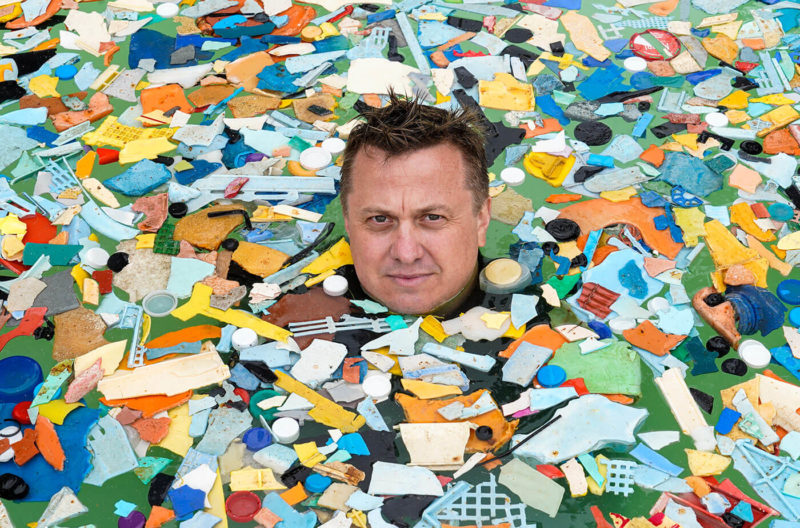 Brodie Neill: “I endeavour to find innovative ways of transforming ocean microplastics into the building blocks of provocative designs.” 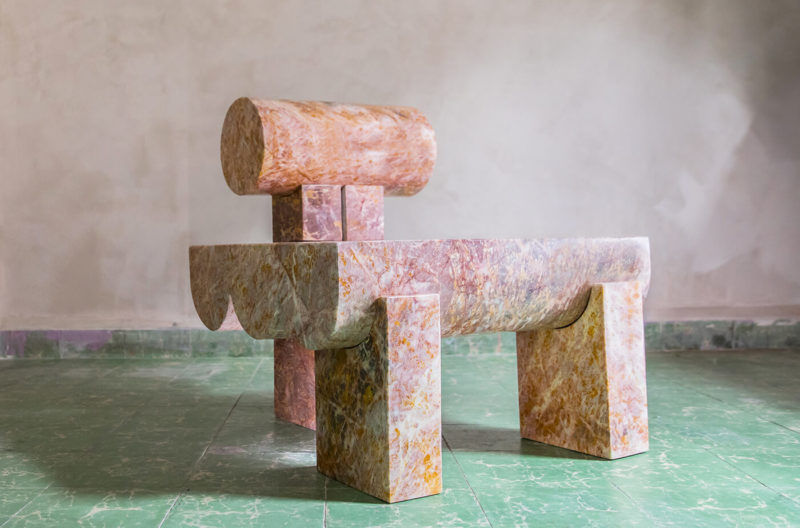 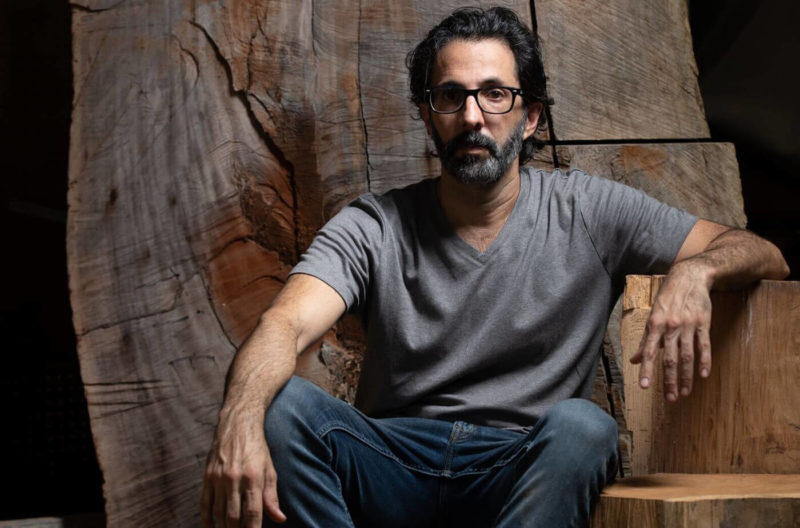 Reynold Rodriguez: “These pieces became a kind of company … They have this very personal, very emotional quality.”