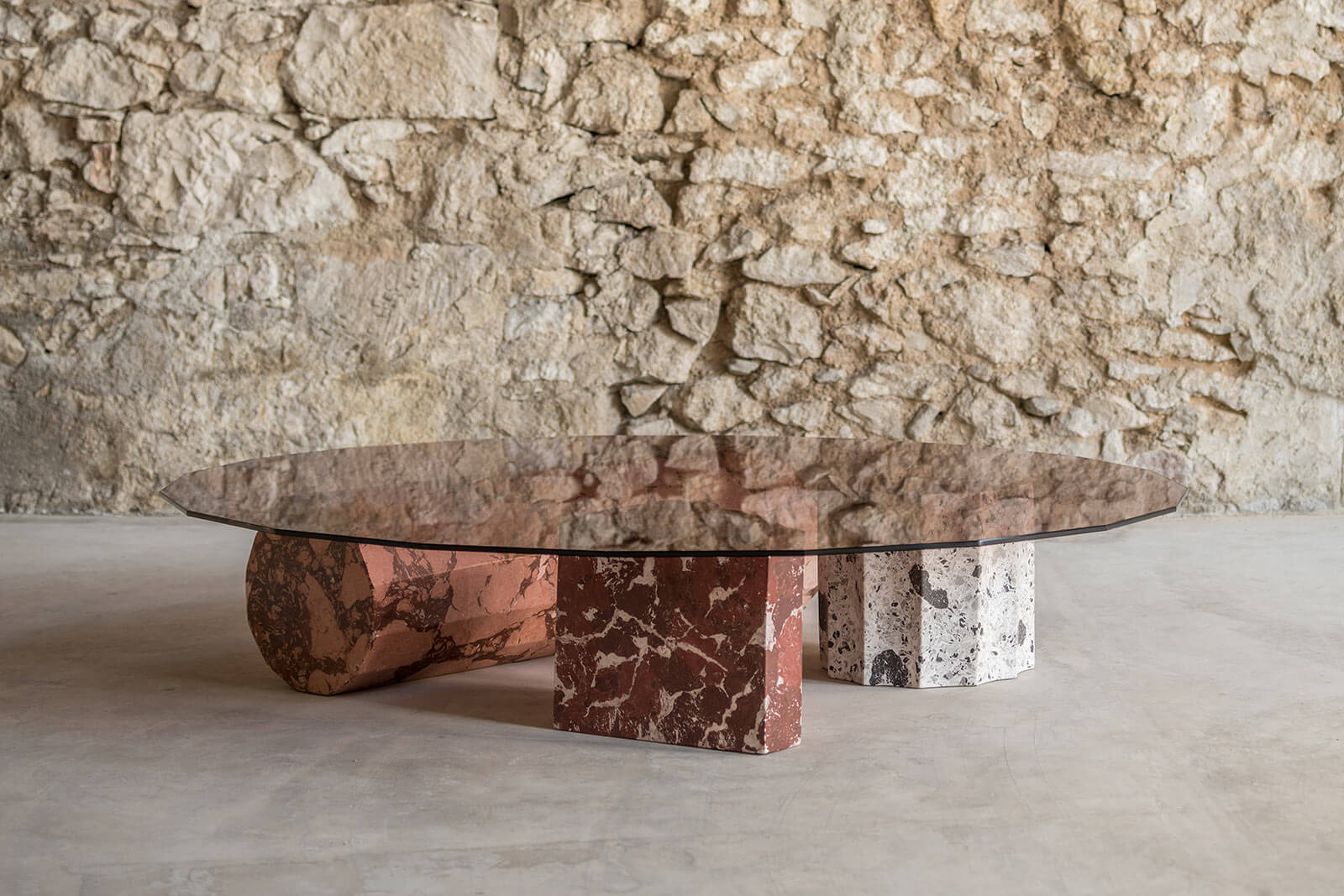 “THE CONSTRUCTIVE ELEMENTS of the classical era – columns, capitals, sections of amphitheatres – are universal signs that belong to everyone and that are constantly reiterated,” Italian designer Roberto Sironi reflects. “Rudimentary components of the industrial era – double-T beams, reticular structural girder and corrugated sheet metal are equally iconic.” Contrasting the way a classical column rises towards the sky, while a double-T beam  – horizontal, scalable, reproducible, a unit of expansion – embodies the driving vision of the capitalist era, he adds, “If there is a desire to find god in classical buildings, the detachment from the sacred is immediately felt within industrial structures.” 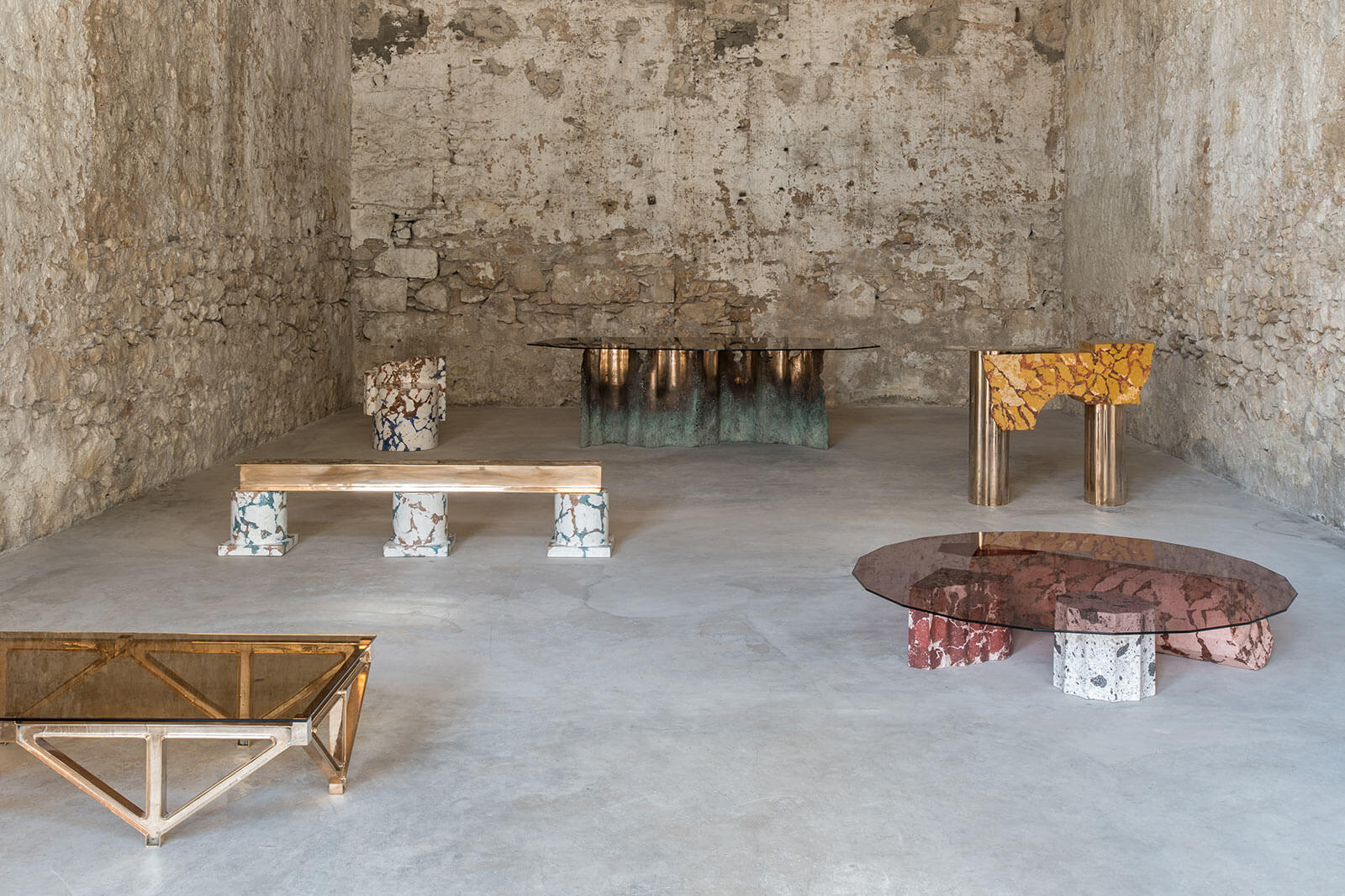 With his latest series entitled ‘Ruins’, on show at Carwan Gallery in Athens, the result of a four year research project supported by IN Residence and Fonderia Artistica Battaglia, Sironi has juxtaposed these components to create contemporary relics. These post-archaeological compositions incorporate replicated fragments he uncovered during an extensive period travelling to notable sites throughout the Mediterranean basin. 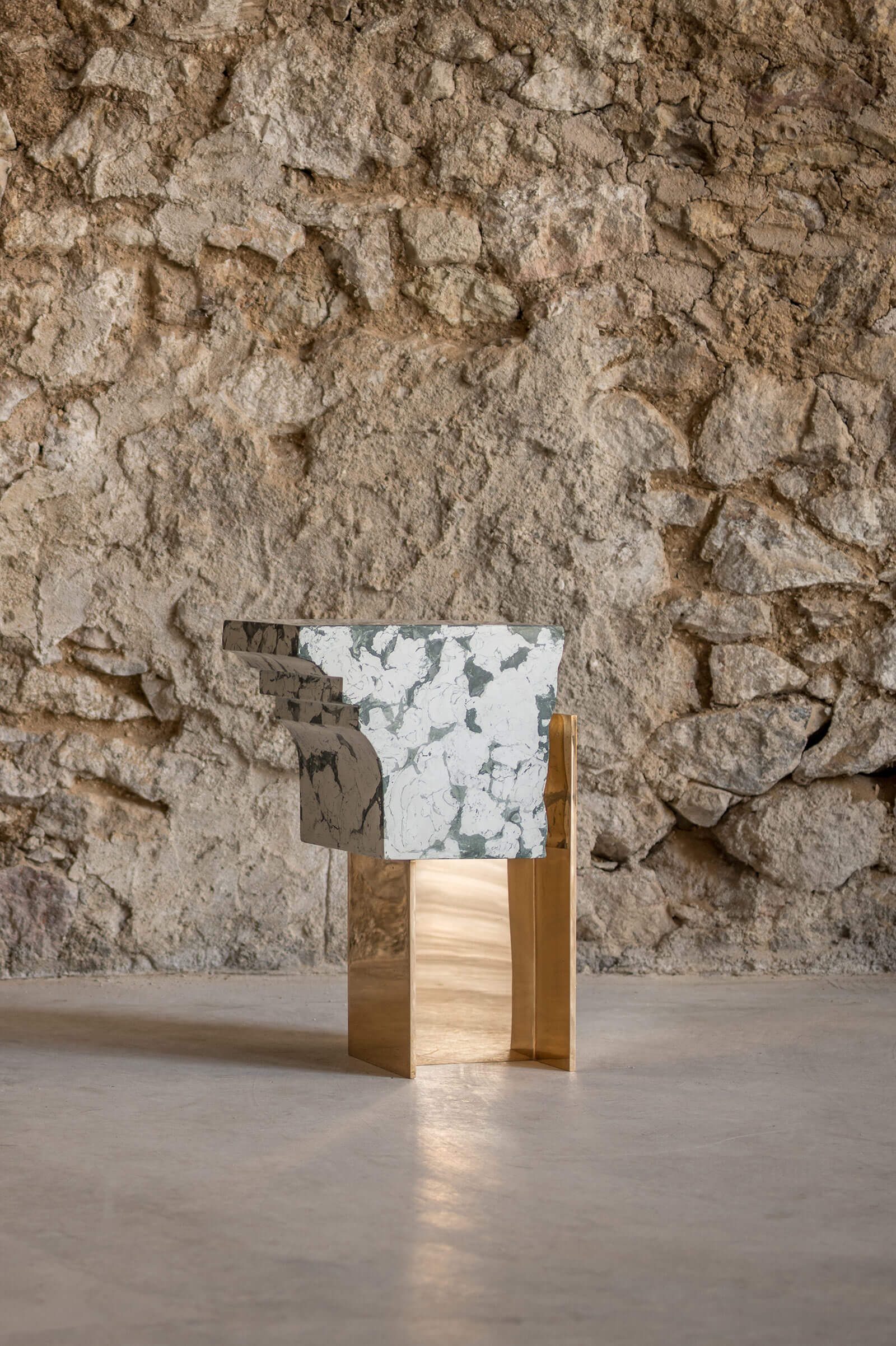 “The research-based designer aims to suggest a sense of eternalism …” 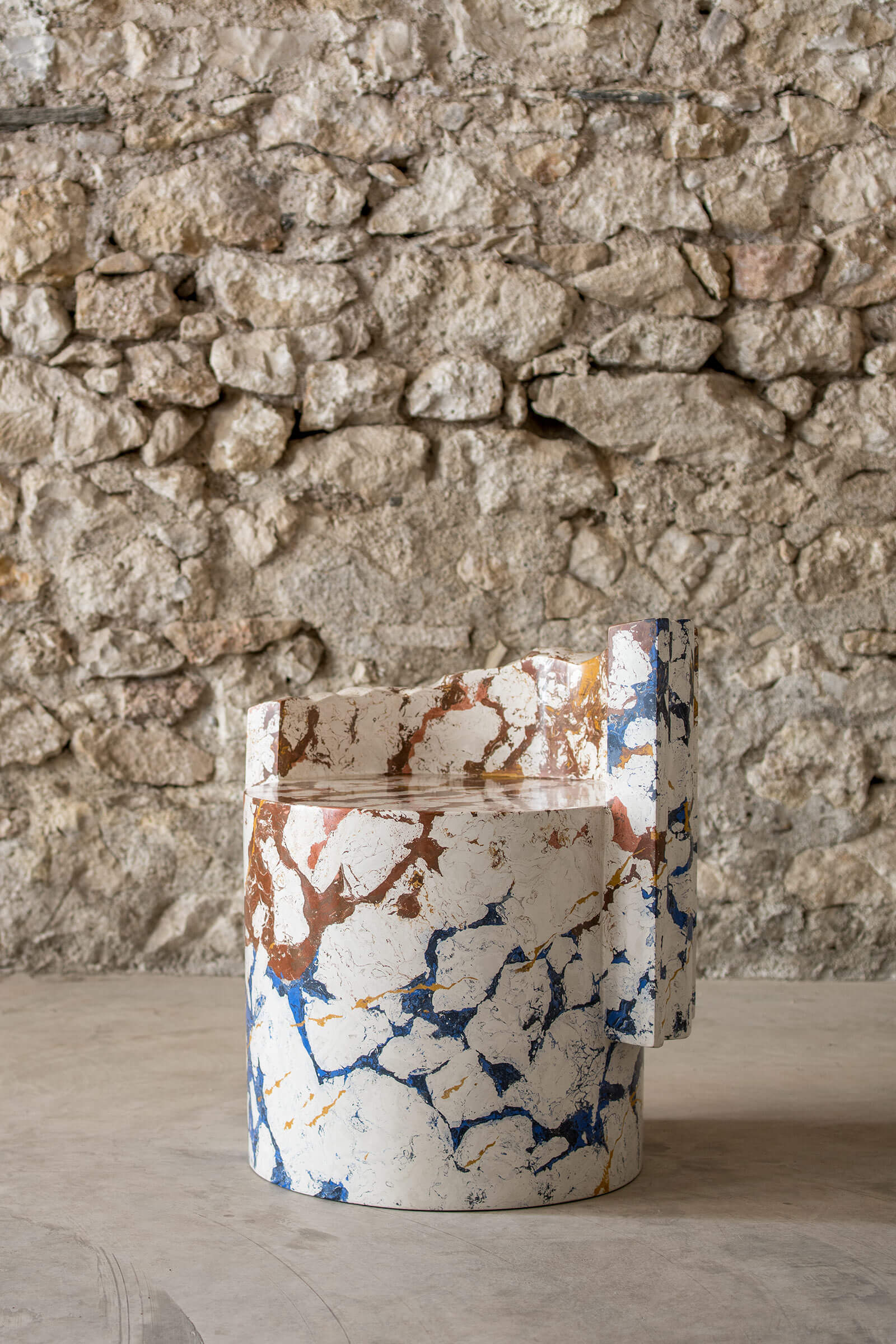 “In addition to numerous museums, I travelled to Volubilis in Morocco, the archaeological parks of Rome, the Valle dei Templi in Sicily, Pompei, Ercolano, Delphi, Olympia and Turin, to name just a few,” Sironi describes. “At these locations, I was able to take a lot of photos that I later analysed in search of key elements to be translated into the collection.” 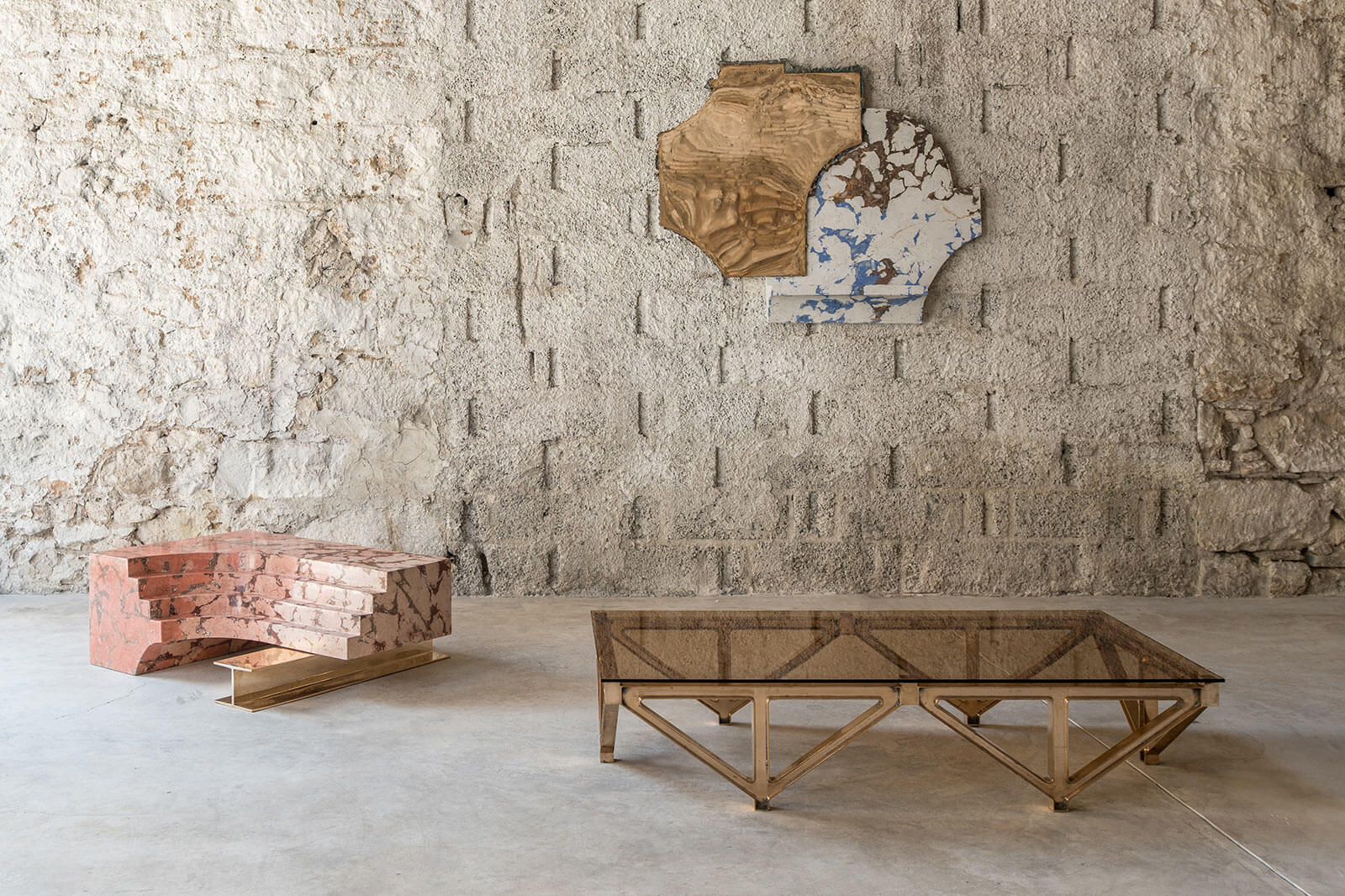 The research-based designer aims to suggest a sense of eternalism  – that all moments of time – past, present and future – are equally real – but also to reveal the fundamental ingredients that have transcended human history. 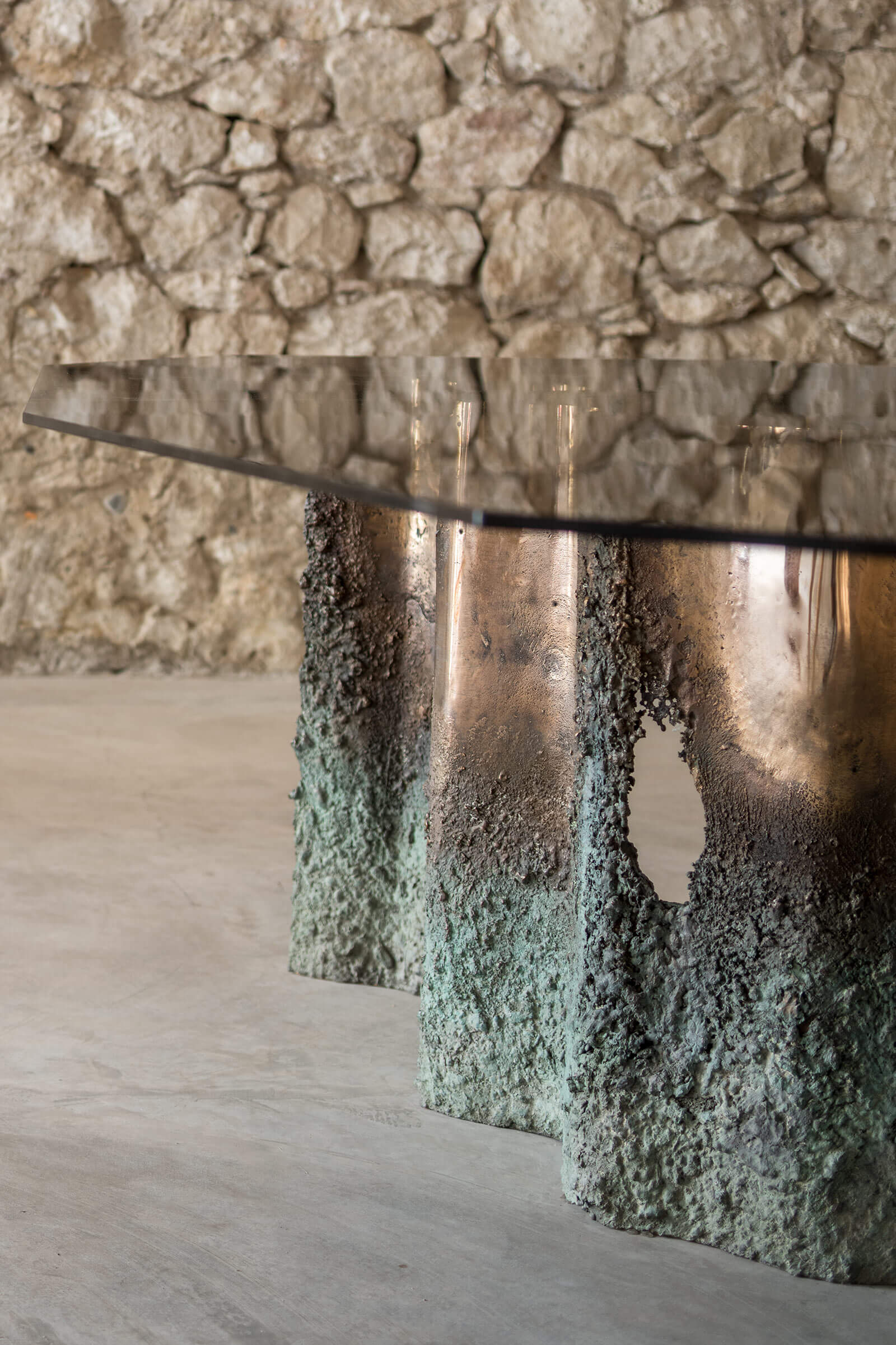 Created using lost-wax casted bronze and Marmo di Roma – materials and processes more indicative of Sironi’s post-archaeological approach than of the historical sites themselves – the works take form as functional tables, pedestals and other surfaces. 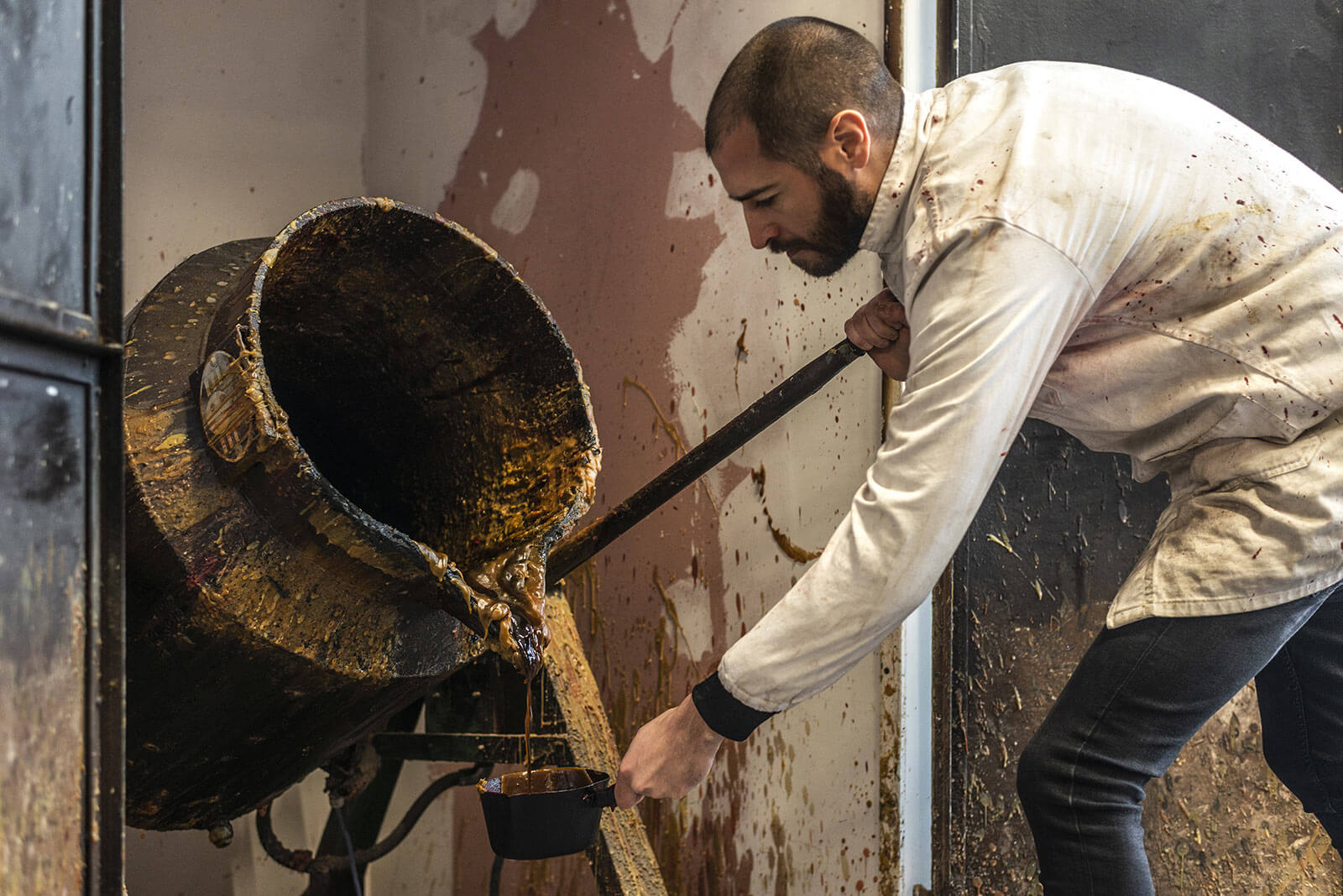 Perhaps the most striking piece in the collection is the ‘Knossos Console’ which imitates an Empyrean arch with its jaggedly-cut capital and uniform pillars. While the stone is used to indicate the classical, the metal refers to the industrial. Compounded together, however, these materials help generate an entirely new vocabulary, one being formed through the viewer’s engagement with the pieces. 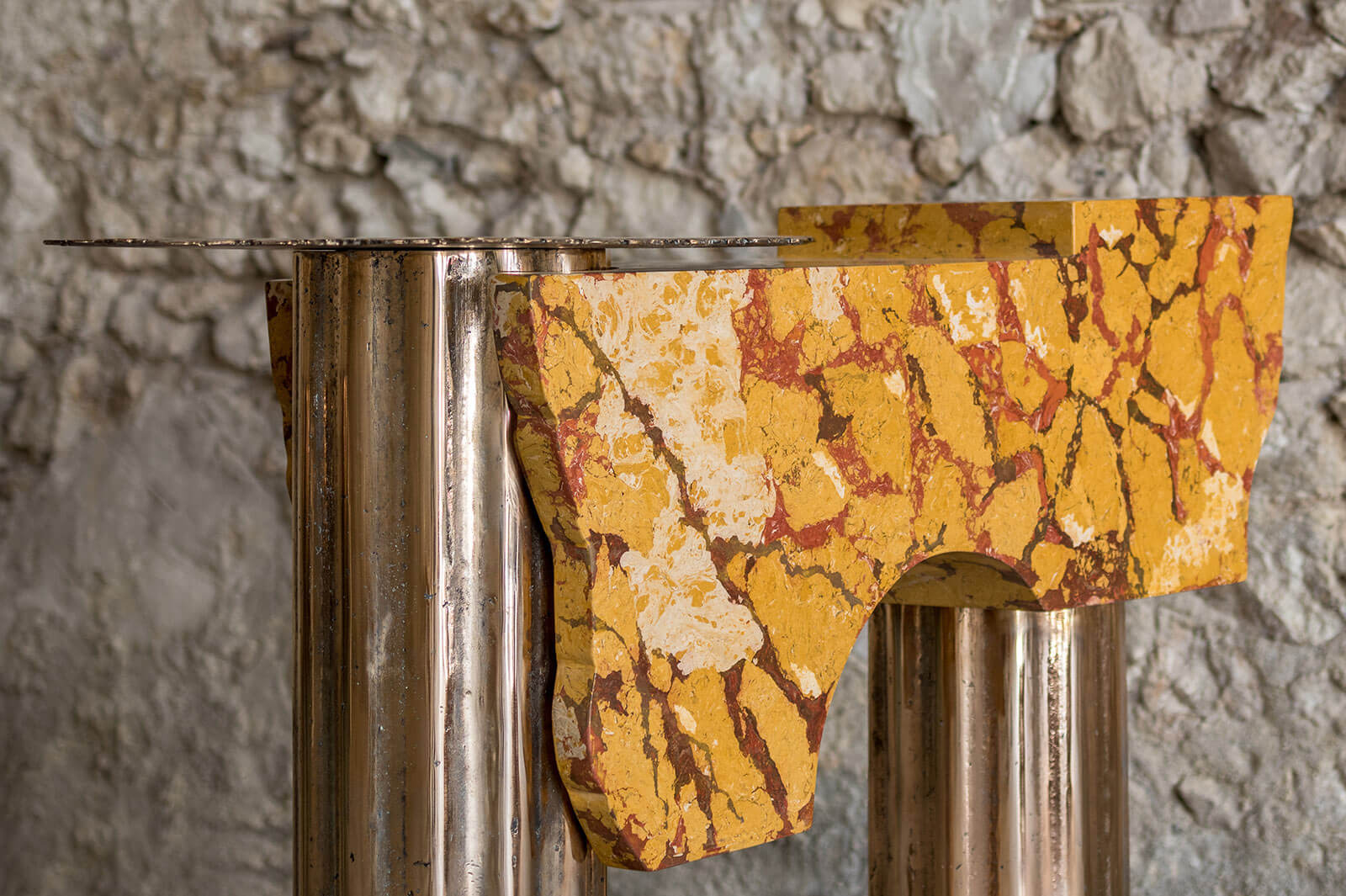 The designer’s practice centres on an anthropological and ecological understanding of material and the practice of making. As with this collection, Sironi often delves deep into investigations of historical, geographical and ritual dynamics. This fascination translates well into his role as a Politecnico di Milano lecturer, where he explores the interplay of design and new technologies. 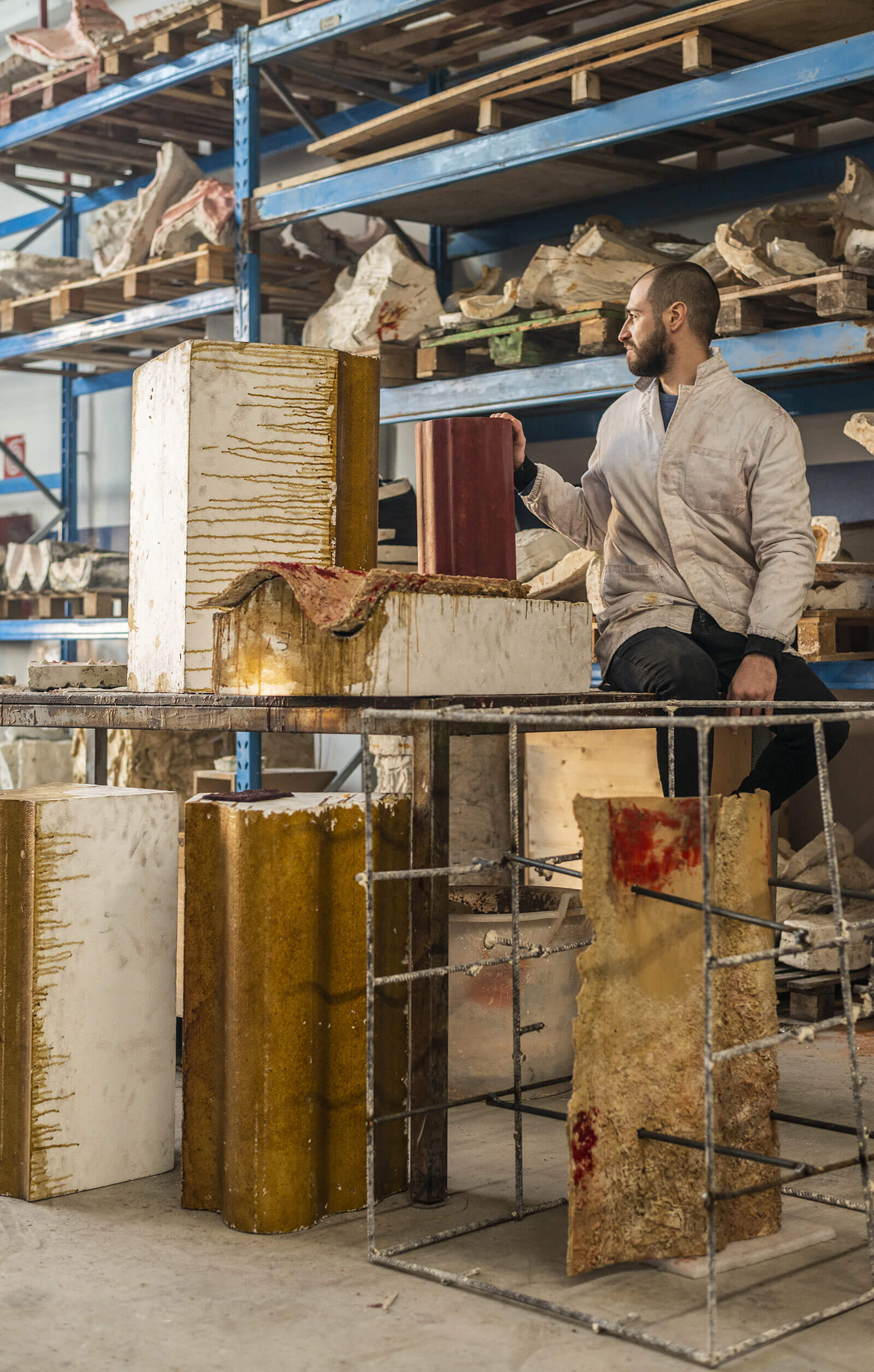 “In my work, I always try to create a narrative through matter,” the designer explains. “Functionality – intended as the satisfaction of a practical need – is always satisfied, even if it is not the central point of the discussion. From my point of view, functionality is also ensuring that an object contains the precise qualities that can continuously feed thoughts and emotions in its user, something that can transmit generative energy over time.” 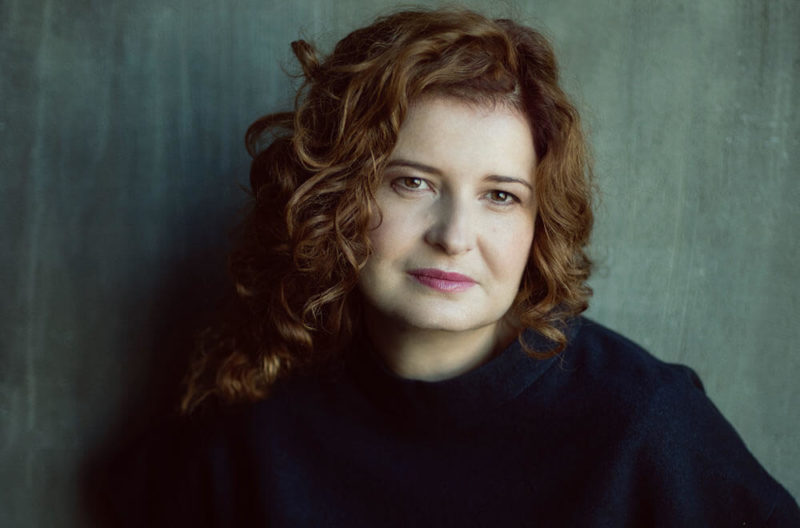 COLLECTIBLE / Mia Karlova: The Russian interior designer opens a new gallery in Amsterdam, inviting us to look again, from a different angle. 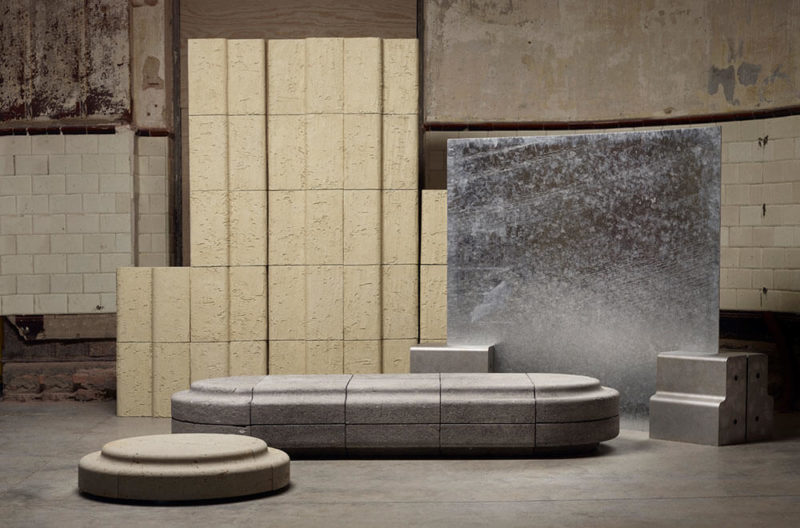 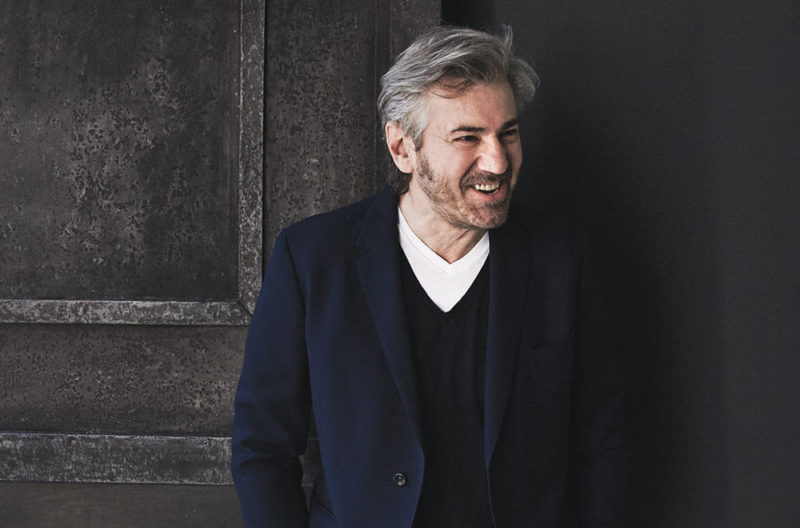 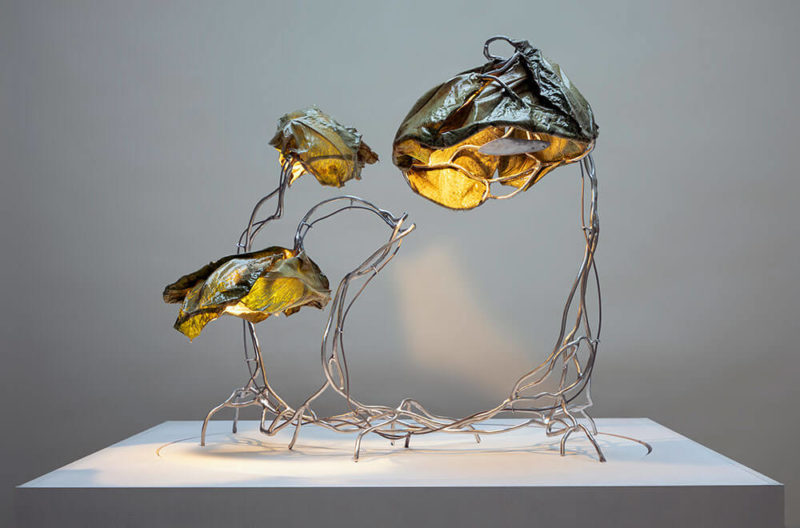