“I DON’T HAVE a single vision of design,” proclaims the French designer Mathieu Lehanneur. “I’m not focused primarily on industrial product design, for instance, or just on decorative arts, or purely the emotional – it’s all of those things combined.” Lehanneur is a versatile designer, working across an eclectic spectrum that includes collectible design, mass-produced, high-tech and ecological products and interiors. Refusing to restrict himself to one domain, his elastic mind shuttles between several projects at any one time. 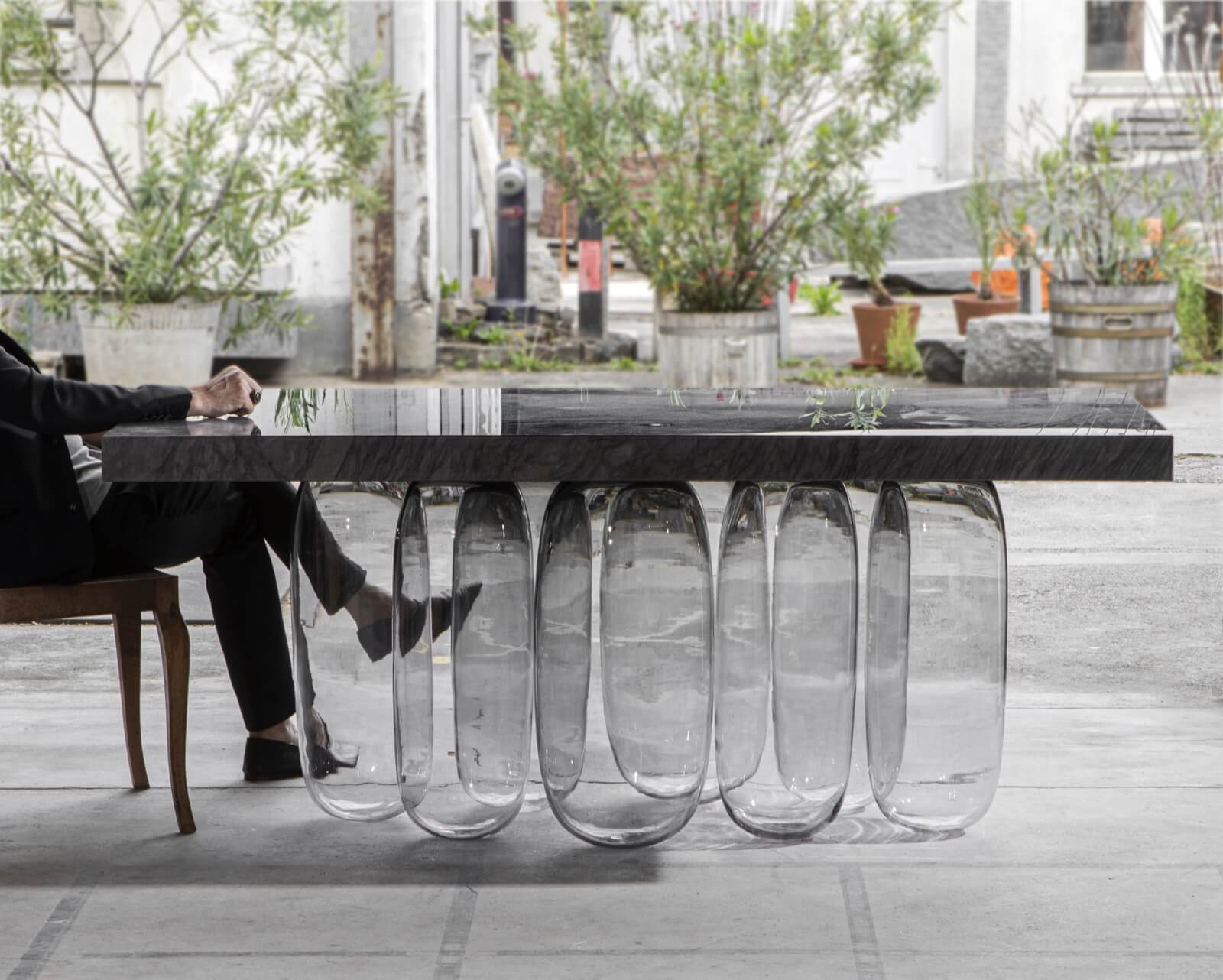 In the last few years, he has designed Café Mollien at the Louvre, Maison Kitsuné’s store in New York, the Air France business lounge, Le Balcon, at Charles de Gaulle airport, and the choir in a French medieval church. Right now, he is working on a foldable, electric bicycle, lighting and furniture, as well as the renovation of the Grand Palais in Paris (which is due to close in a few months for a revamp ahead of the Olympic Games in 2024).

This multifaceted approach made him a good choice to be president of the jury of the latest edition of Design Parade Hyères, an annual design competition in the south of France. Lehanneur, 44, could evaluate the diverse proposals without being biased towards any particular kind of project. “Initially, there were 250 entries, which the festival organisers reduced to 170 – from which I selected 80. Then with the jury we chose ten, and finally just one,” he says. From entries using alternative energy, recycling of industrial waste and cardboard, seaweed and human interaction, the jury awarded the prize to Grégory Granados for his project, ‘Step’, a collection of collective musical instruments. 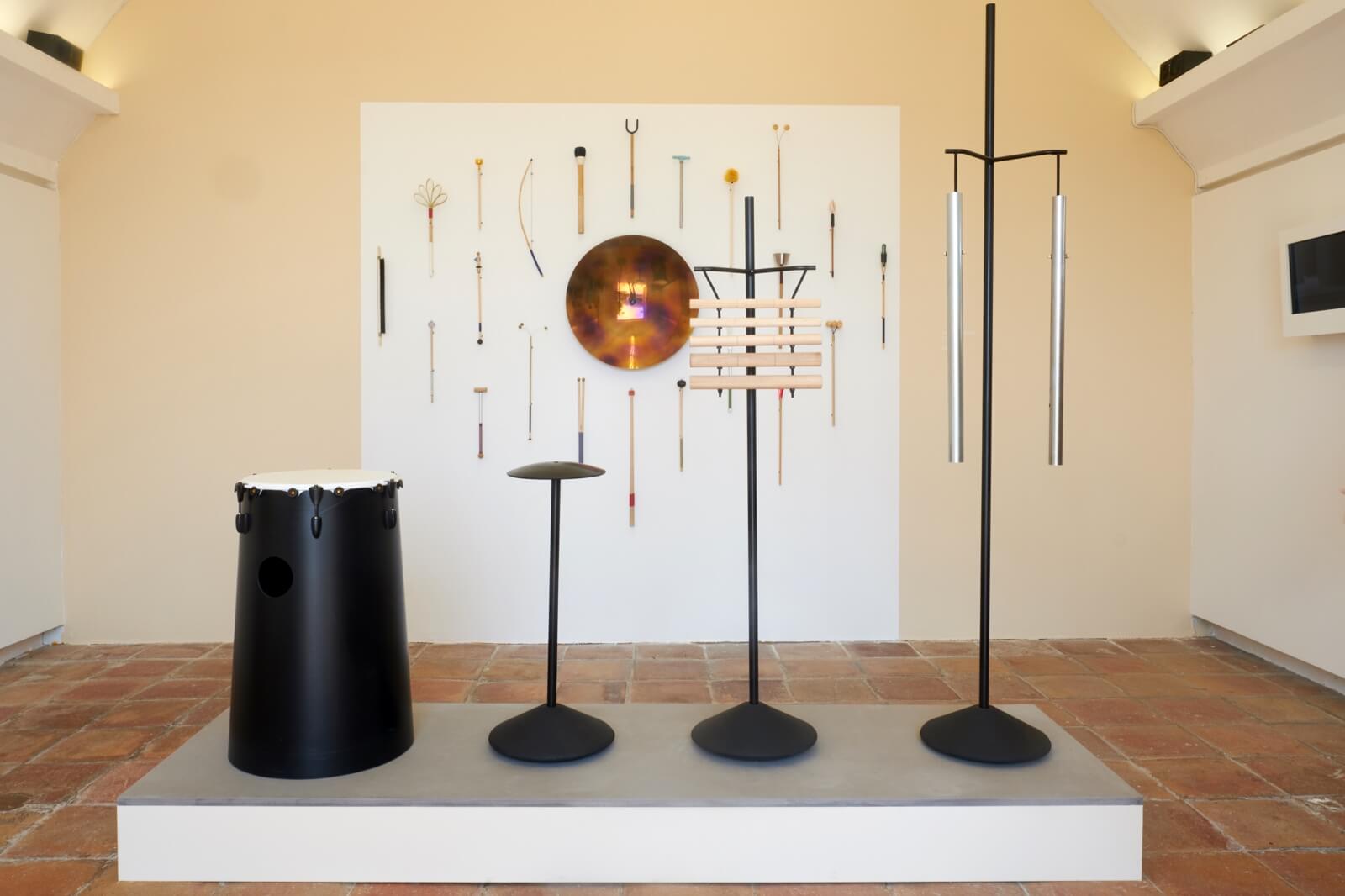 Standing on concrete bases, the instruments comprise metal tubes onto which sonorous, steel elements are attached. They are designed to incite spontaneous group play in a public space or school. “Grégory is a musician and his project is about making music as intuitively and instinctively as possible,” Lehanneur enthuses. “The domain of musical instruments has been treated very little by design, it’s something reserved for specialists. I like it when designers go into less explored areas of design. ‘Step’ had an immediate visual and mental engagement.”

DESIGN PARADE HYÈRES takes place in Villa Noailles, a modernist villa designed by Robert Mallet-Stevens in the 1920s for the art collectors Charles and Marie-Laure de Noailles. “The place is still impregnated with that history and you feel the villa’s welcoming ghosts,” says Lehanneur. 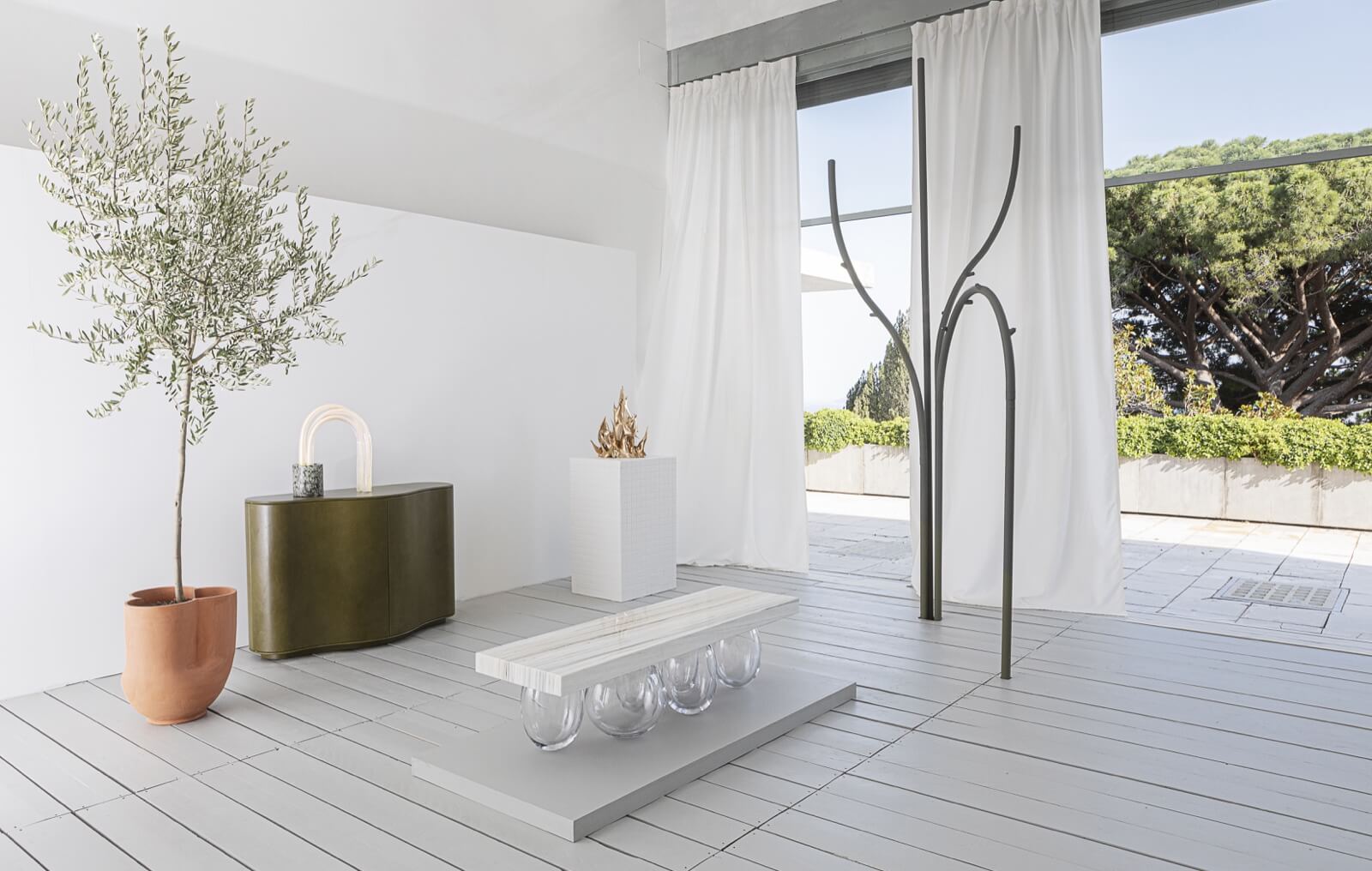 Besides the finalists’ projects is an exhibition of Lehanneur’s own work, titled ‘Particle Horizon’, which showcases how natural phenomena, technological innovation, science and decorative arts inspire him. In a room filled with pieces of furniture in subdued colours is a column of pale grey “living-air filters”, called ‘Andrea’ (after Lehanneur’s son), with plants inside them. Made in 2009 in collaboration with David Edwards, a professor at Harvard University, ‘Andrea’ absorbs toxic compounds from the air in a room, and, thanks to the purifying ability of the plant’s leaves and roots in the soil, filters the air. It was conceived using NASA research. “After NASA’s first flight into space, the astronauts had pollution in their lungs from the synthetic materials in the rocket’s interior – such as fibreglass, resin, varnish and paint,” Lehanneur recounts. “So NASA carried out tests in the 1980s about the capacity of plants to clean air.” 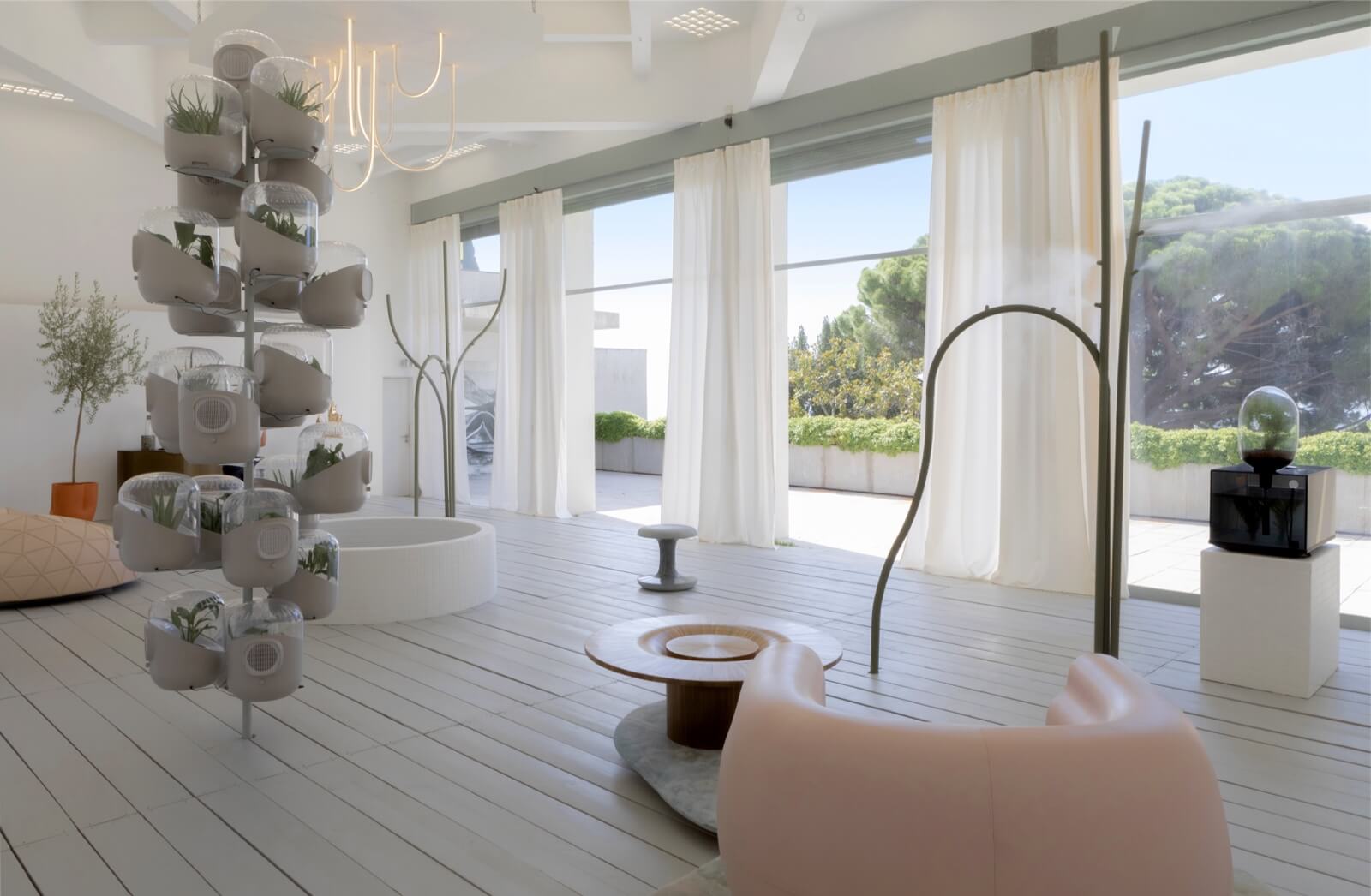 Lehanneur is now developing ‘Fog Trees’, water atomisers formed from three dark green trunks with tiny nozzles that diffuse mist in the room. The piece is previewed at Design Parade. “Because it’s extremely hot in the south of France, we wanted the visitors not only to see the pieces – but to feel them, physically,” Lehanneur explains. “Every two minutes, you’ll feel a mist refreshing the room. It’s an alternative to air-conditioning and is the most natural thing possible that consists of diffusing water whilst consuming very little of it.” Through the ‘Fog Trees’ and other pieces, Lehanneur sought to convey an atmosphere of wellbeing. As he says, “I wanted this softness of living to be felt, as well as the pleasure that is in the history of this house.” 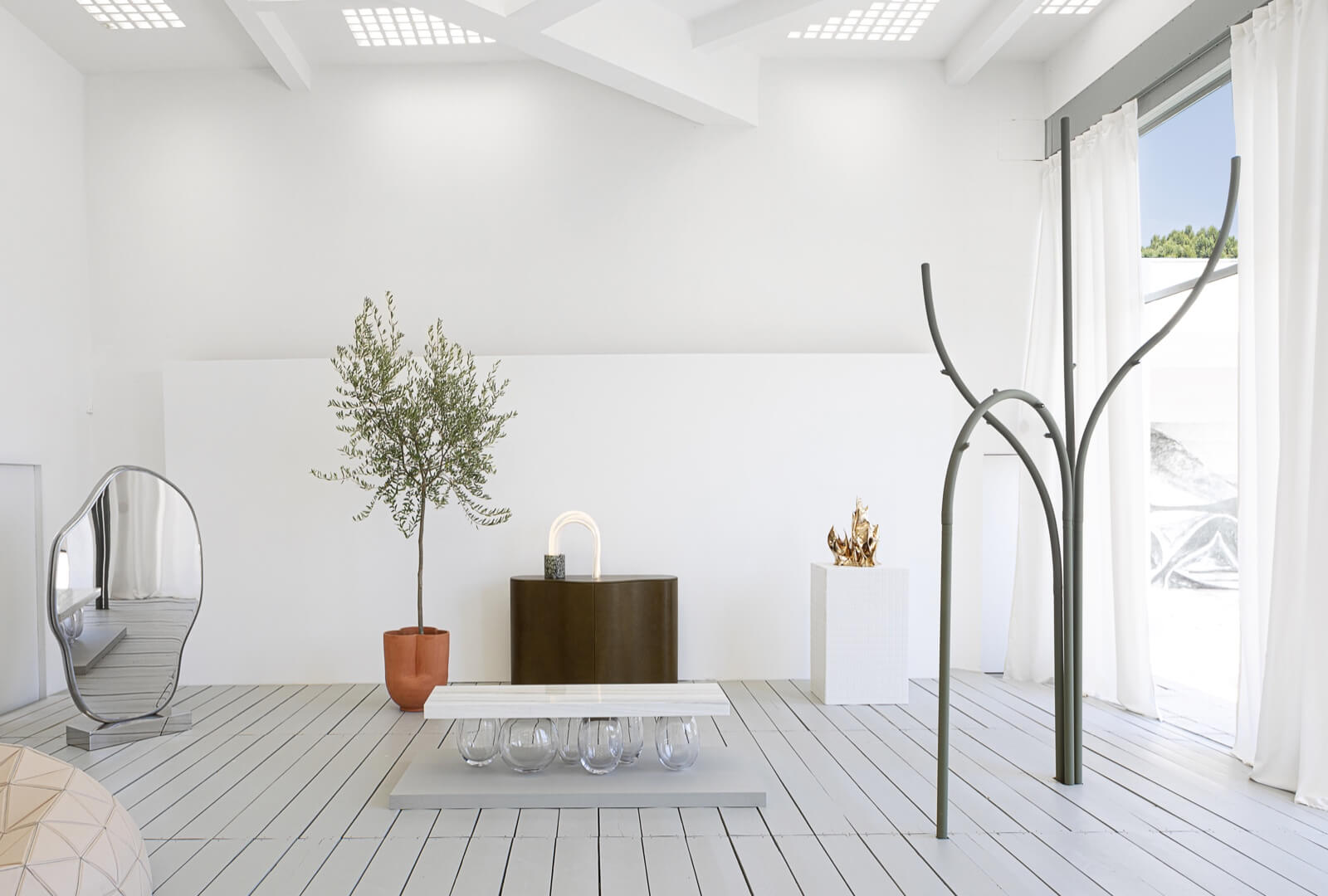 OUR CONVERSATION IS held in Lehanneur’s agency in the trendy second arrondissement of Paris, on the right bank. His office is a large open space of two rooms, while his team is on the floor above. Asked to define his design language, he replies: “A geometry of softness. There’s no rectangle, or cube in the human being – we’re only made of curves. But these human curves have been produced for reasons of structure, comfort or growth. I like trying to find this geometric logic of nature and things that develop by themselves, that seem alive and don’t seem designed by a designer.”

This “geometry of softness” and elegance are the cornerstone of Lehanneur’s design DNA that is transmitted across his range of projects. What emerges is his curiosity to research ideas and realise things that have not been made before. Take his ‘Inverted Gravity’ (2019) collection that was unveiled at DesignMiami/ Basel in June. Marble tables and cabinets seem to be resting on glass bubbles in a gravity-defying feat – instinctively, one would imagine the glass shattering under the marble’s weight. It is precisely this sense of wonderment that motivated Lehanneur. 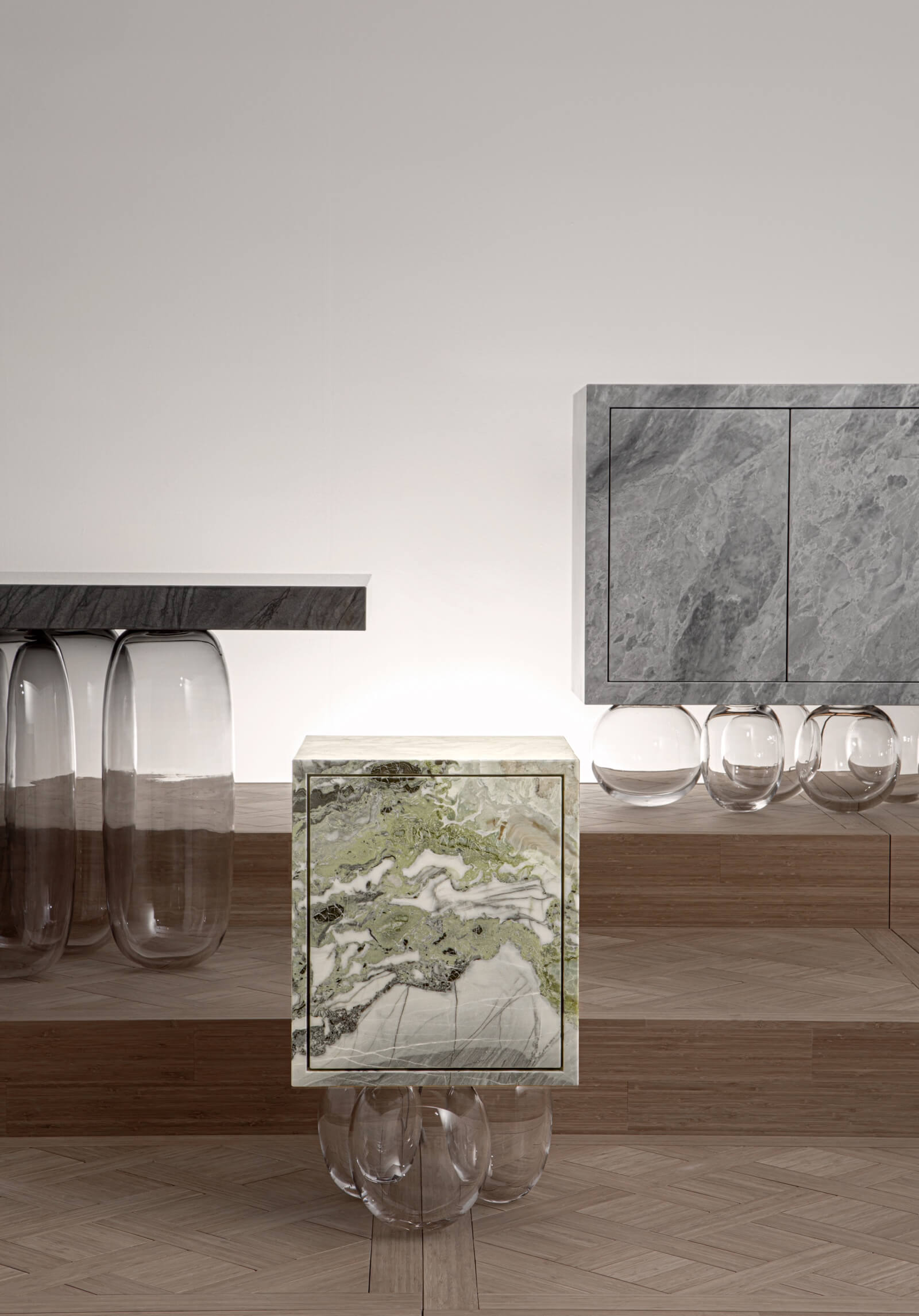 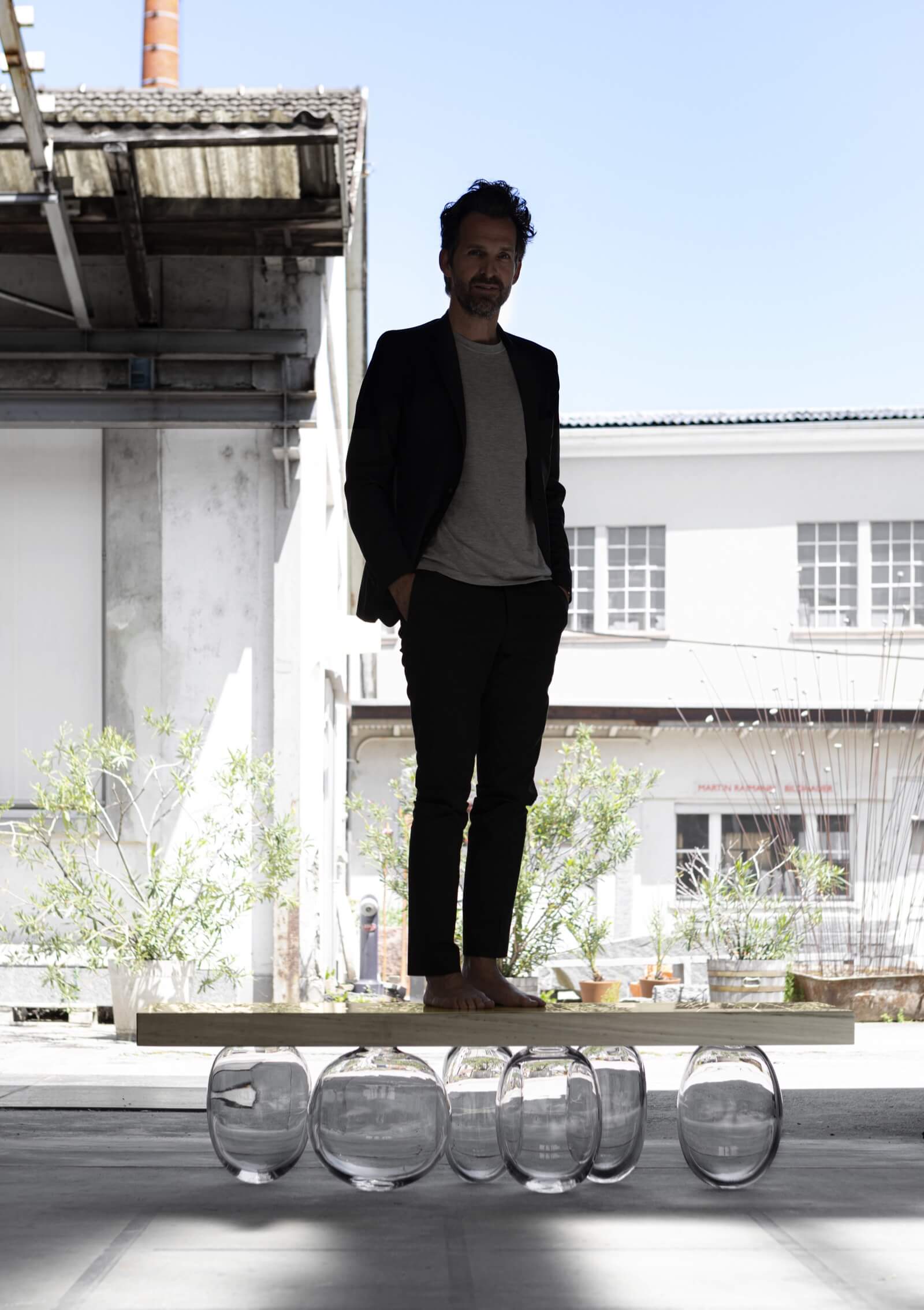 “… Instinctively, one would imagine the glass shattering under the marble’s weight”

“Like a lot of people, I’ve always been fascinated by aerospace photos and videos where we see astronauts drinking water while floating in space in this state of zero gravity,” Lehanneur says. “So I asked myself whether we could imagine modifying gravity or our perception of it. Normally, we always put fragile things made from glass, like a vase or art object, on top of a piece of furniture. I wanted to see if we could invert this.”

Lehanneur asked a glassblower in Basel if he thought blown-glass could support a heavy weight. After glowing a large bubble, the glassblower tested it by putting a weight of 250 kilos on top of it. Pleased with the result, Lehanneur designed a collection comprising a buffet, a dining table, a console, a bedside table and a bench. “Even if in our mind glass is fragile, if it’s blown with the right thickness, it’s extremely resistant and strong,” he says, adding that a regulating system was introduced to distribute weight between the bubbles.

THE DESIGN PARADE exhibition also presents Lehanneur’s new bench, ‘Domestic Forest’ (2019) – a machine-sculpted tree trunk sitting on four short golden legs. “I was contacted by the machine’s inventor – a crazy engineer/inventor who didn’t know what to do with his invention,” Lehanneur says. “He knew my work and asked if we could begin reflecting together on how to develop it.” 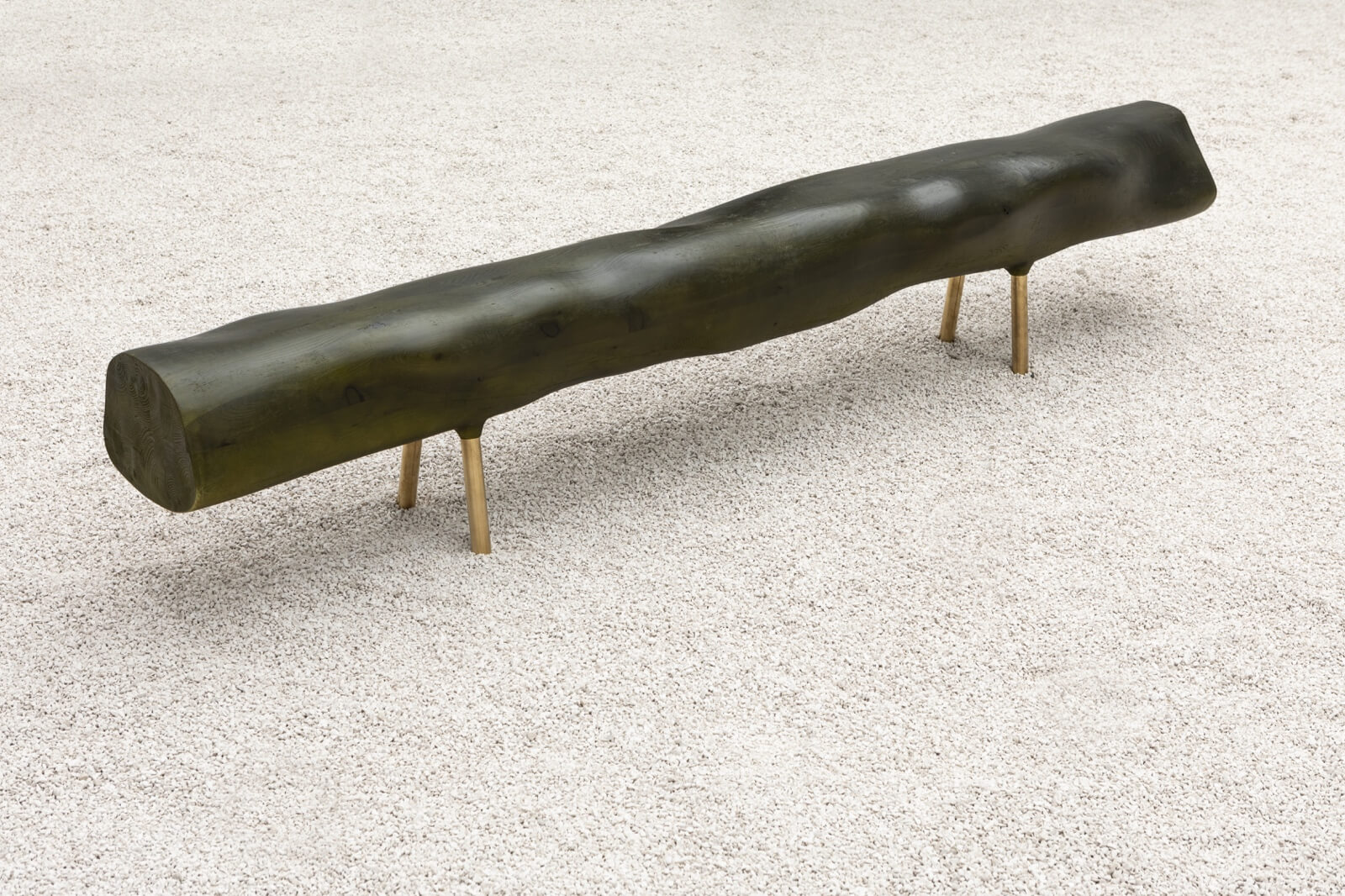 They worked on forms using a computer, then the machine sculpted the piece according to the digital file. “The machine automatically sculpts the piece of wood in an extremely fast, precise way, which is faster and cheaper than using complex machines that sculpt very slowly.”

Lehanneur had previously used digital techniques to develop his ‘Liquid Marble’ series (2016), one piece of which was exhibited at the V&A during the London Design Festival three years ago. A long rectangle made from black polished marble, its rippling surface reflects or deforms the light, mimicking the waves. It was conceived using 3D software normally used for special effects in the cinema, machine-sculpted and then hand-polished. 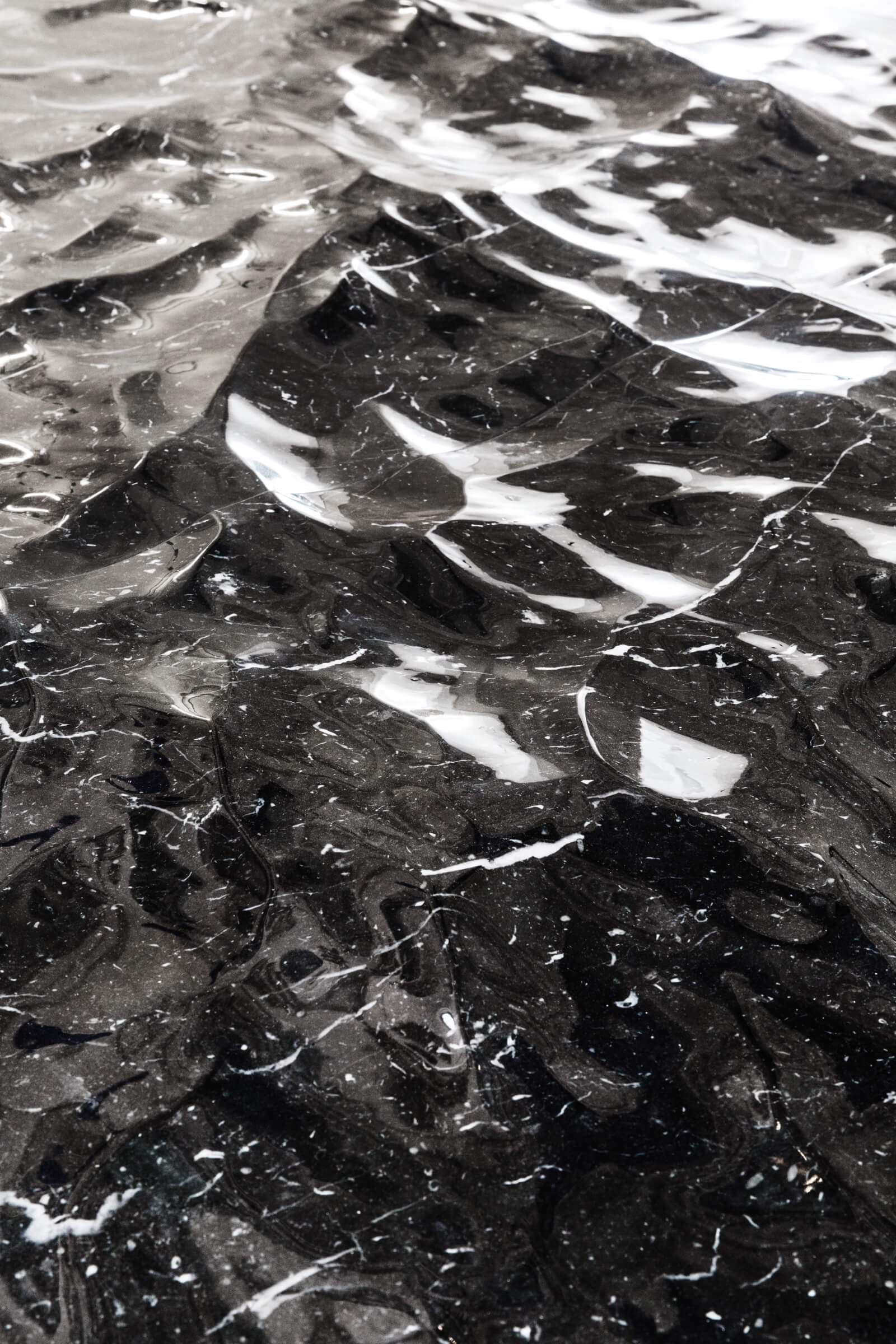 “We don’t draw the waves with the software; we only control the current and the wind digitally, then the waves appear,” Lehanneur clarifies. “Once the image is strong, interesting and powerful, we freeze the moment, create the relief so it’s not flat and the machine will sculpt the block of marble. What’s interesting is that it isn’t the designer who designs, it’s a digital sea.” Receptive to how visitors contemplated the piece, he adds: “There was a couple in their eighties who arrived in the morning and stayed in front of the piece all day. They were sitting on a small bench as if they were in front of the sea, looking at the water.”

Lehanneur also harnessed digital techniques to create his ‘Ocean Memories’ (2017) collection of machine-sculpted marble furniture with rippling surfaces, which was shown at Carpenters Workshop Gallery, and a collection of plates, ’50 Seas’ (2018). Produced from a palette of greens, blues, turquoises and greys, each plate evoking one of the seas in the oceans, the latter was exhibited at Christie’s Paris last year. “I worked from satellite photography where you see the real colours and tints, then we found the same subtleties in the enamel,” Lehanneur elucidates. “We added an element so it becomes flat, as plates are functional objects.” 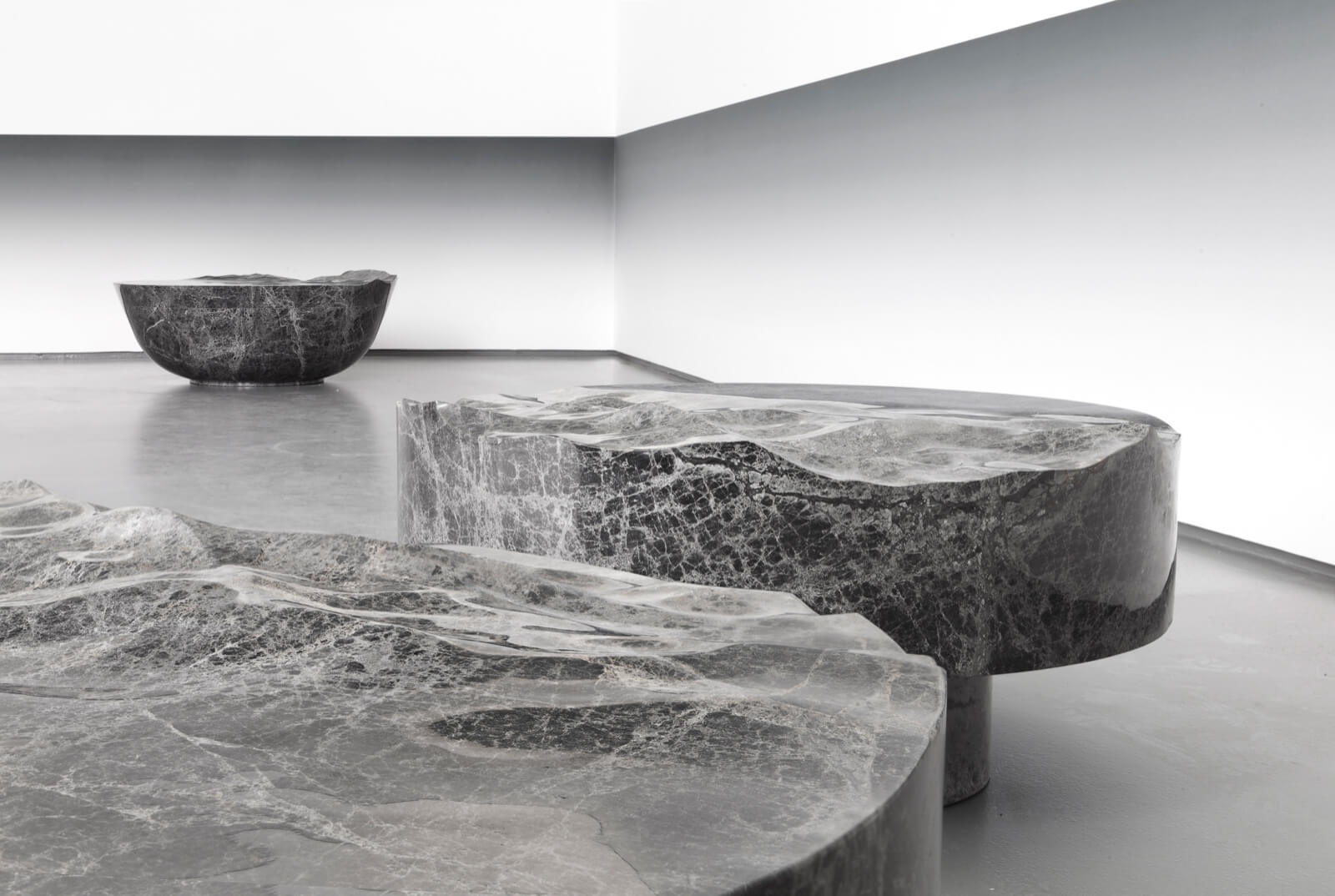 Lehanneur’s flexibility means that he is well known beyond the field of design. A few years ago, he was contacted by a priest, Father Jacques Lefebvre, who invited him to design the choir of the St. Hilaire church in Melle, Deux-Sèvres, southwest France. “He didn’t want an artist or church specialist; he wanted a designer. So we met and worked on the project for three years,” Lehanneur recounts. “The ideas and intuition can come fast,” he says, clicking his thumb and forefinger. “But the transformation of ideas into something real is a very lengthy process.” After making a 3D scan of the eleventh-century church, the strata of marble were conceived digitally and installed layer by layer, “numbered like pieces in a jigsaw puzzle”, around the pillars. The stratified effect is rhythmic, like “magnetic waves” says Lehanneur. 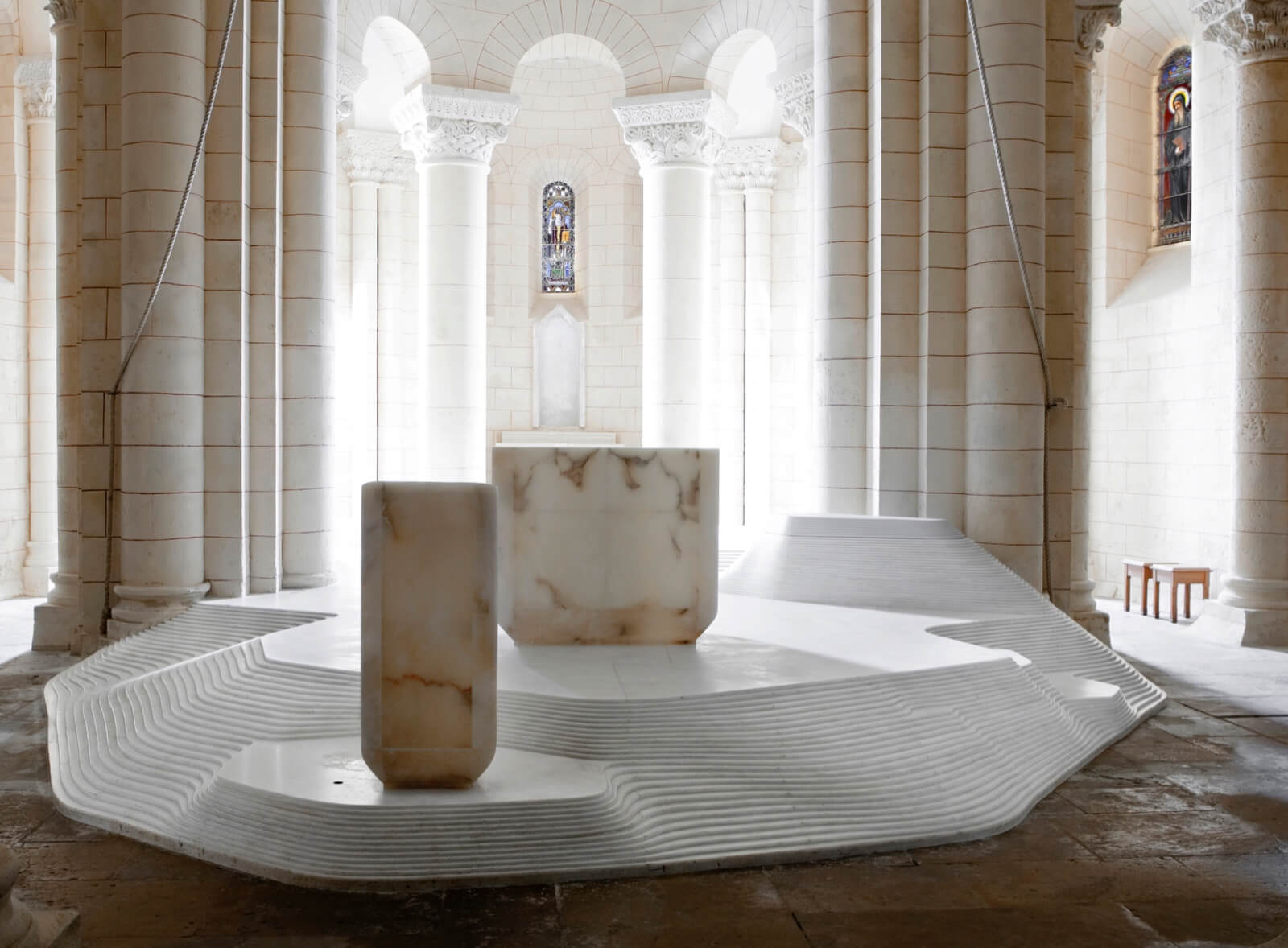 “My work is always a mix between natural and human elements – the technical, technological and rational,” Lehanneur says. “It’s two universes mixing, which is the history of humanity. My design pieces always have rectangular or round forms from geometry, rationality and civilisation. I mix a rectangular form, like in ‘Liquid Marble’, with something from nature, like waves, as if it’s a battle or cohabitation game between human beings and nature, which we’re trying to tame. It’s not that different from the Impressionist painters striving to capture light and nature with a brush onto a rectangular canvas.” 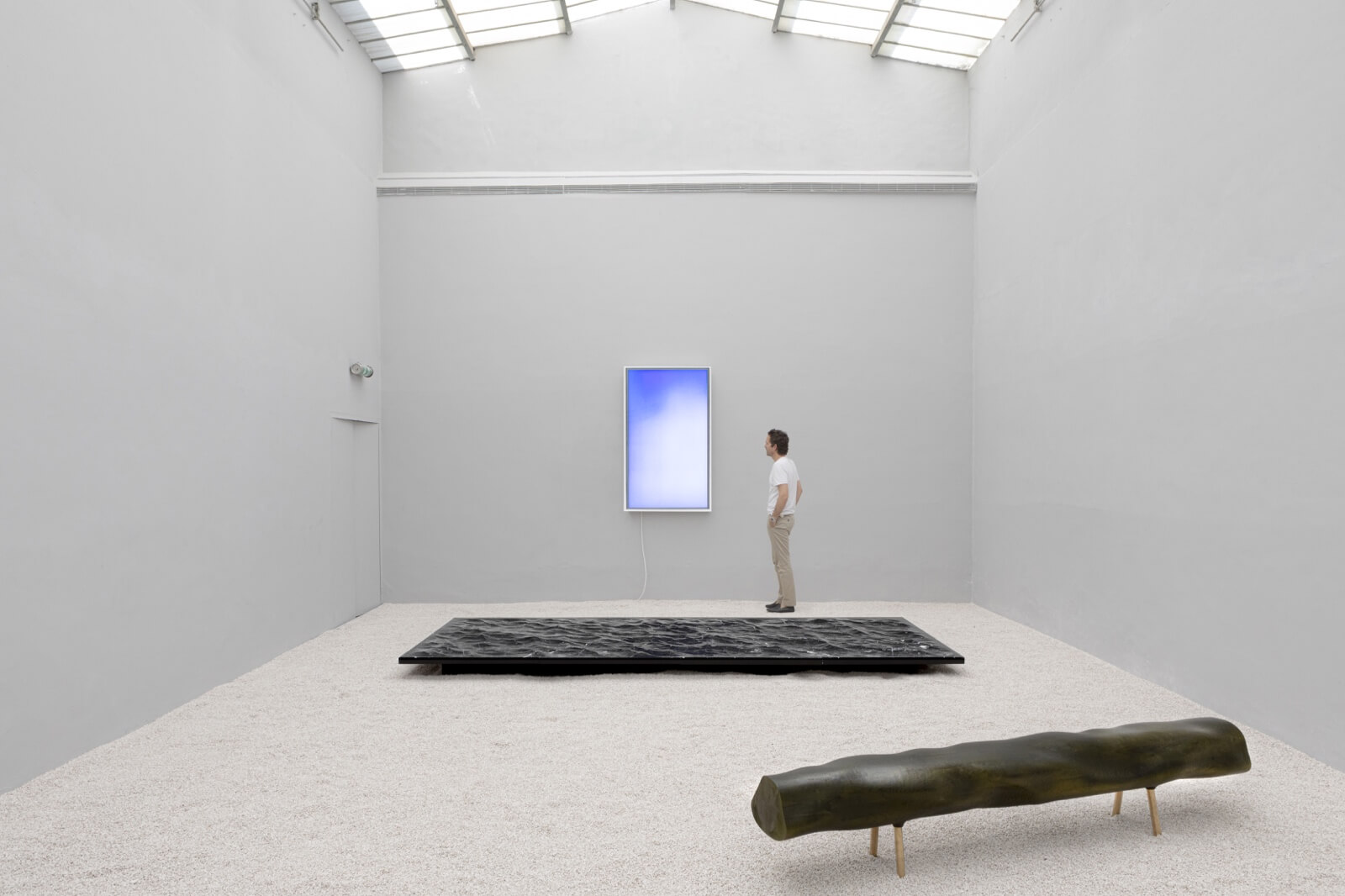 Instinctual and cerebral, the antennae of Lehanneur’s mind reach far and wide, all the while refining a sophisticated, French aesthetic.

The Design Parade Festival at Villa Noailles in Hyères runs until 29th September 2019. 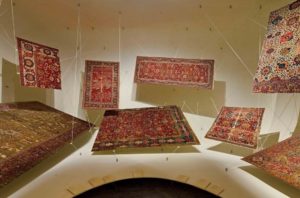 People
Joseph Grima
As Milan's Museum of Italian Design unveiled a new installation of its permanent collection, Caroline Roux caught up with its exceptionally busy curator.
By Caroline Roux
The Design Edit
For Collectors and Dreamers
Read
Connect
Legal
Join Our Bi-monthly Mailer
Follow and Share
© 2021 The Design Edit.
All Rights Reserverd