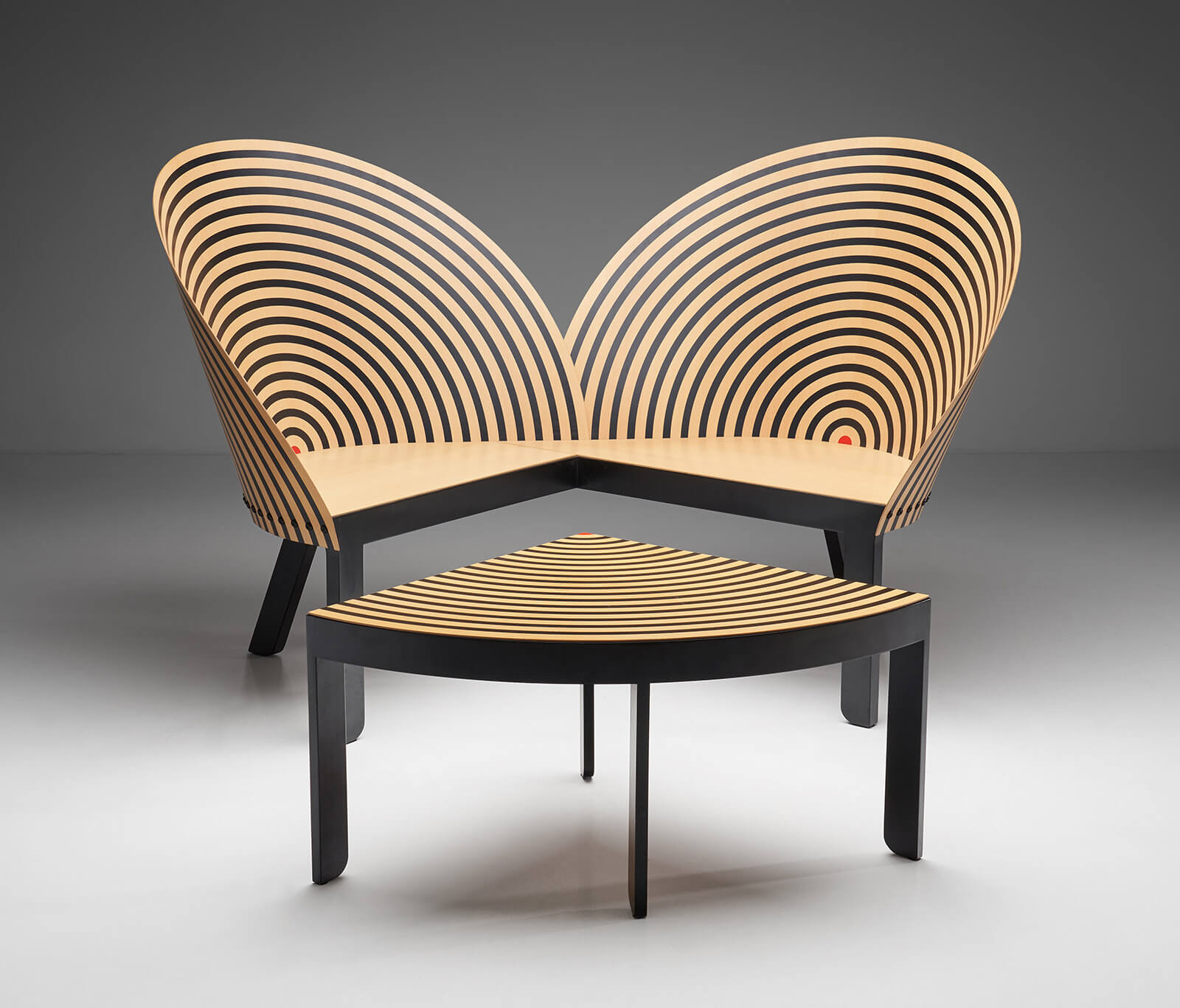 IN 1989, THE year she turned sixty-six, Danish designer Nanna Ditzel came up with this bold and beautiful bench. It was her first joint-project with the venerable Danish furniture manufacturers, Fredericia, a commission won on the basis of this elegant, curvaceous design and Ditzel’s inventive use of materials. The shielding, wing-like backs are made from ultra-thin 1.5 mm silkscreen-printed aeroplane plywood veneer – a material that is strong, light and flexible – while the target pattern playfully alludes to radar, or butterfly wings. It has a matching table which fits neatly into the triangular space cut for it. The bench won Ditzel a Gold Medal in the 1990 International Furniture Design Competition in Japan and initiated a long collaboration with Fredericia, for whom she became second house designer.

Ditzel had always been a pioneer. Born in 1923, she trained as a cabinet maker before going on to the School of Arts and Crafts and the Royal Academy of Fine Arts in Copenhagen. There she met her husband, Jørgen Ditzel, with whom she set up a design studio in 1946. Until his early death in 1961 they worked experimentally with fibreglass, wickerwork and foam rubber, and in various disciplines such as cabinet making, jewellery, tableware, and textiles, winning the gold medal in the Milan Triennale in 1960 and in 1956 the Lunning Prize for Scandinavian design. Their iconic joint project is the hanging egg-shaped chair. A second phase as a designer in London, between 1968 and 1986, establishing the international design company Interspace with her second husband, Kurt Heide, lasted until Heide’s death in 1985. Far from giving up, Ditzel returned to Denmark and established a studio in her own name, becoming a leading figure in the 1990s renewal of Danish design, and working right up until the end of her life, in 2005.

In contrast with the prevailing Danish design ethos of function, economy and sobriety, Ditzel believed in what she called “the human element”. She once commented to the Danish design writer Henrik Sten Møller: “Of course the design must function well, but over the years I have developed a strong feeling that there is more in every object. To be sure, a chair is for sitting in, but it also expresses an age, eroticism, essence, human feelings, dreams. While functionality must naturally be preserved, for me chairs have increasingly become attempts to meet the challenge thrown down by all these other elements.”

This wonderful example features in the exhibition From Thonet to ‘Dutch Design’: 125 years of Living, currently at the Stedelijk Museum in Amsterdam.

Nanna Ditzel Design A/S – is a Copenhagen-based design company and studio taking care of, and continuing, the lifework of Nanna and Jørgen Ditzel.

From Thonet to ‘Dutch Design’: 125 years of Living at the Stedelijk Museum in Amsterdam runs until 31st March 2021.