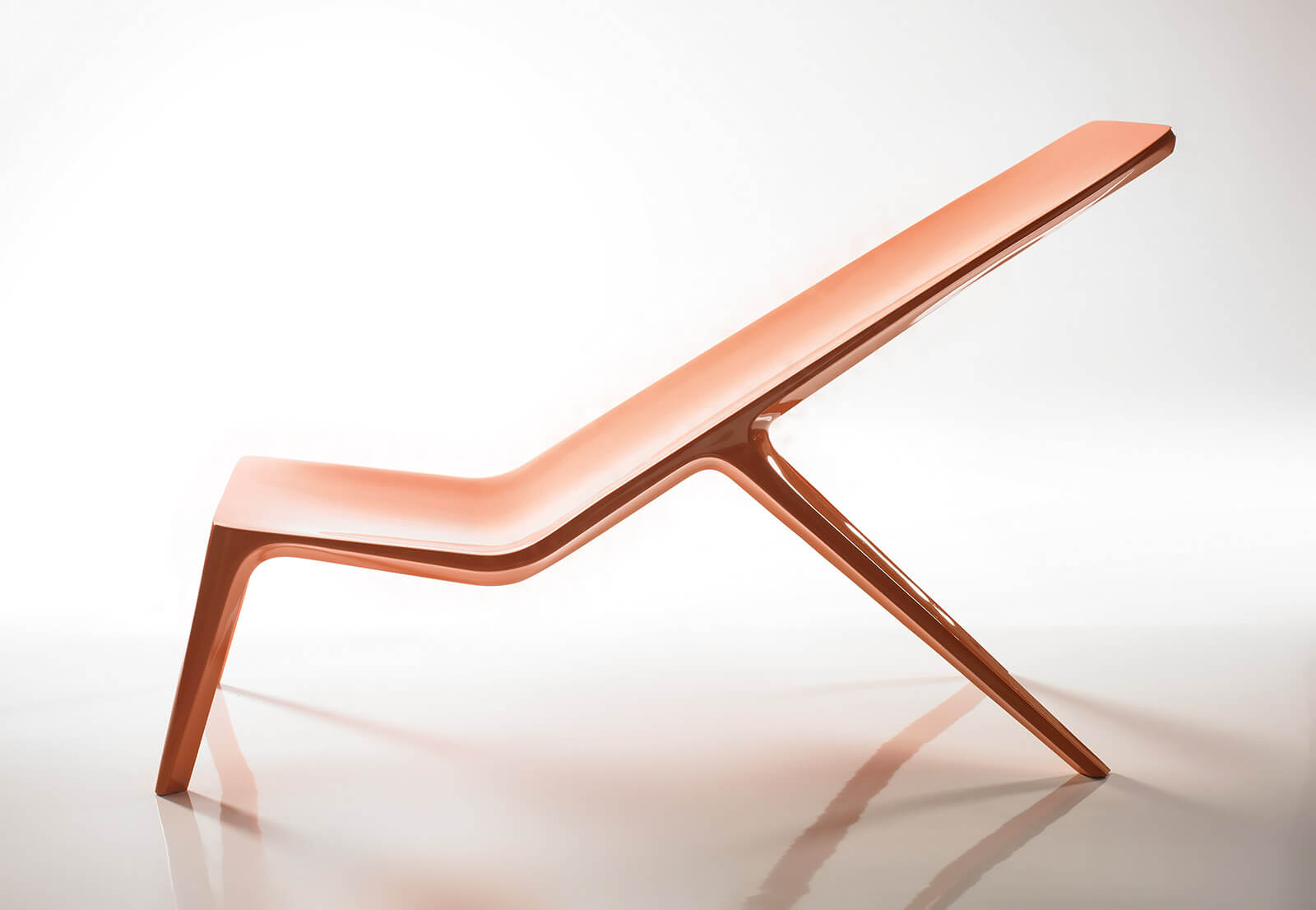 IN 2012 A plea for funds appeared on Kickstarter. Ini Archibong (born in 1983), a recent graduate of the Environmental Design programme of the ArtCenter College of Design in Pasadena, California, invited support to create prototypes of two designs to submit to Wanted Design Manhattan 2012. The young designer, of Nigerian descent, born and educated in the United States, was a good bet – he had already been named Student Designer of the Year, in the Bernhardt/Stylus American Design Honors, in 2010. Within a month the funds were raised, and the first prototype ‘Stargazer’ chair shipped to New York.

It is an impressive graduate piece – confident, beautiful, with its slim, elegant profile, shiny high gloss orange lacquer and strong yoga posture. It nods both to traditional wooden West African models and to the western world of high luxury. More than that, however, it represents a highly sophisticated integration of the fundamental elements of Archibong’s identity and an indication of the direction he wanted his work to go. It unites the earthbound world of furniture design with the spiritual dimension of the heavens. It requires someone who sits in it to abandon all other entertainment, and even self-consciousness, and gaze into the night sky.

Archibong has explained, in a recent conversation with Stephen Burks organised by New York gallery, Friedman Benda, that the initial brief was for an office chair. “I remember thinking, I want to make something aligned with my heritage.” He was frustrated with “how many things were wrong with the way the western world ascribed meanings to the objects they had stolen from us.” As he puts it, “the Stargazer Chair was me saying, well, where my people are from, you don’t create a chair just for sitting … if you are going to make a chair, you are going to make it to do something. That chair is a telephone to the ancestors.” Archibong explains that many western museums label similar wooden West African prototypes “Birthing Chairs”, and that that is correct: “The shape of the chair is the same because being in a position where you are simultaneously communing with the ancestors and giving birth makes sense.” He determined the angle of the chair’s back by increasing the angle until it was uncomfortable to hold up a book, an iPad or even to hold up a phone. “When you are sitting in this chair,” he says, “you can’t do anything but look up at the stars.”

Since 2012 Archibong has moved to Singapore and then Switzerland, where he continued his studies, has collaborated with luxury brands including Hermès, Knoll and the Sé Collections, and participated, as one of six designers, on an exhibition of experiential design entitled Speechless: Different by Design, at Dallas Museum of Art. In June he launched a fundraiser to build a pavilion for the African diaspora to represent people who “don’t have a flag to represent us”, for next year’s London Design Biennale. This year he is one of nine designers invited by the American Hardwood Export Council (AHEC), Benchmark Furniture and the Design Museum London to make work for a project titled Connected, to be shown at the Design Museum in London, when it reopens. As Archibong says of his accelerating career, “It started with the Stargazer.”