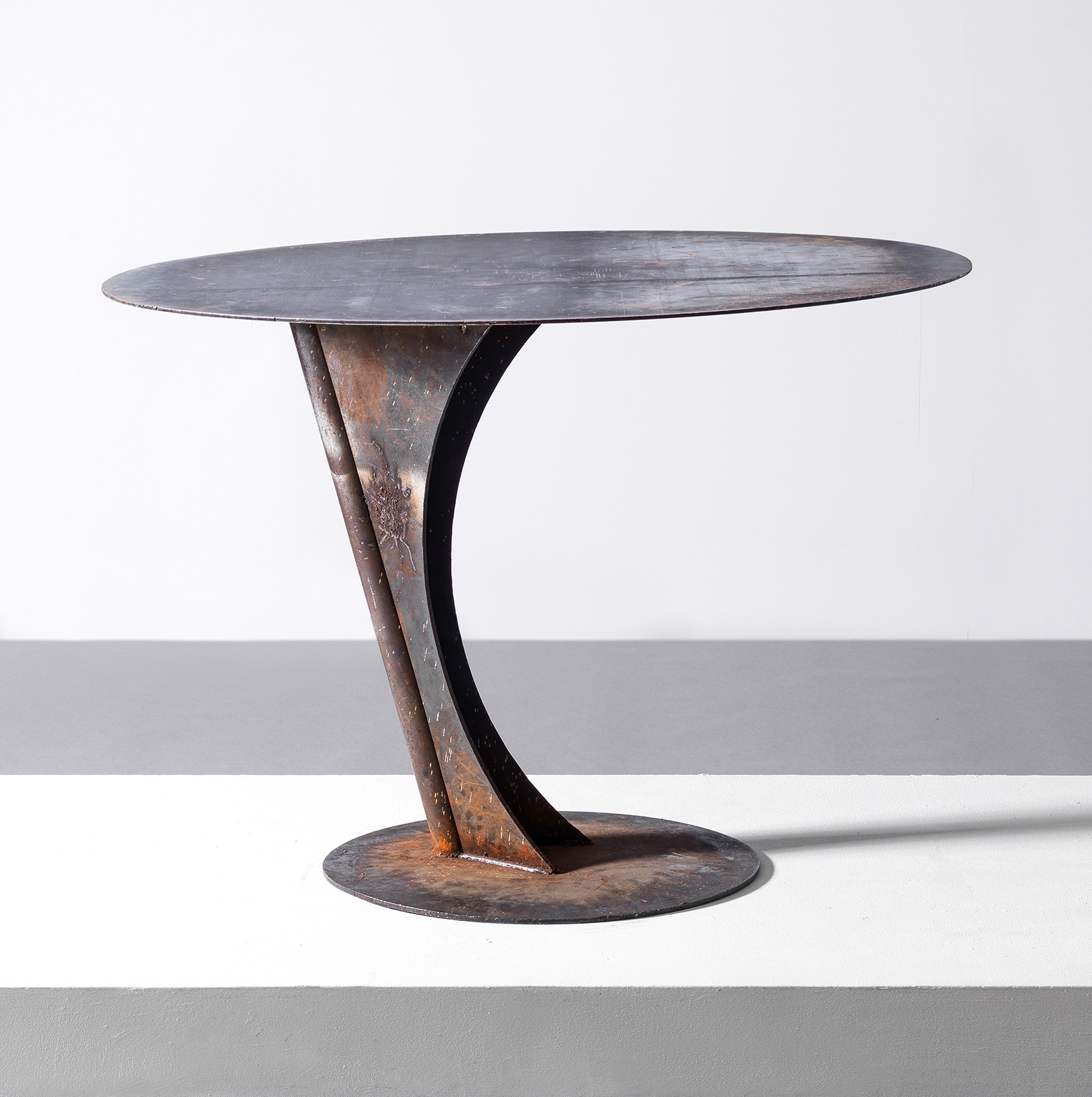 THIS UNIQUE STEEL table by one of the world’s great designers is coming up for sale next week at Bonhams, London. It was made by Tunisian-born British designer Tom Dixon, who came to fame in 1980s London, making welded furniture from industrial salvage. It comes from the collection of Nick Wright, author of Cut & Shut: The History of Creative Salvage, published in 2012, a chronicle of this fertile period.

Dixon, as has become design history legend, had no training in design, having left the Chelsea Art school after six months. Instead, in his early twenties, he spent two years playing bass guitar with Funkapolitan, an eight-piece pop-funk band that toured with The Clash and Simple Minds, while running Hip Hop club nights with singer Nick Jones in Soho on weekends. When they outgrew that venue, and, as Wright’s book describes, “began putting on parties in pirated buildings across London’s industrial deadlands,” they were joined by Mark Brazier-Jones, who started cutting up scrap cars as part of the entertainment. It was then that Dixon, seeing the potential for making furniture and sculpture out of the scrap, discovered what he has called his superpower – welding. “My first lesson in oxy-acetylene welding came from a friend with a car body repair shop,” he explains on his website. “A whole new world opened up to me – this was a quick and effective way for me to make things. I made over 100 chairs in my first year just because I could.”

The welded salvage furniture quickly found a clientele, and Dixon’s studio expanded to become a training ground for a whole generation of young talents from Thomas Heatherwick, to Michael Young and Michael Anastassiades. The anarchic energy of his early work soon became something sleeker. By 1986 Dixon had designed his iconic ’S’ chair, picked up by leading Italian manufacturers of avant-garde design, Cappellini, and today found in museum design collections across the world. But despite later preeminence – as Creative Director of Habitat, as the creative force behind the Tom Dixon brand, and as Tom Dixon OBE for services to Innovation and Design – and through all his experimentation with various materials and in other fields of design, his fondness for an industrial aesthetic and its raw materials remains (witness his ‘Flame-Cut’ series of 2008).

The geometry of this piece (estimate £1,000 – £1,500) is particularly beguiling – along with its economy of means, purity of line and that lustrous painterly patina.