As the re-opened galleries get into their post-lockdown stride, Anna Sansom guides us through the collectible design offerings from four current exhibitions. 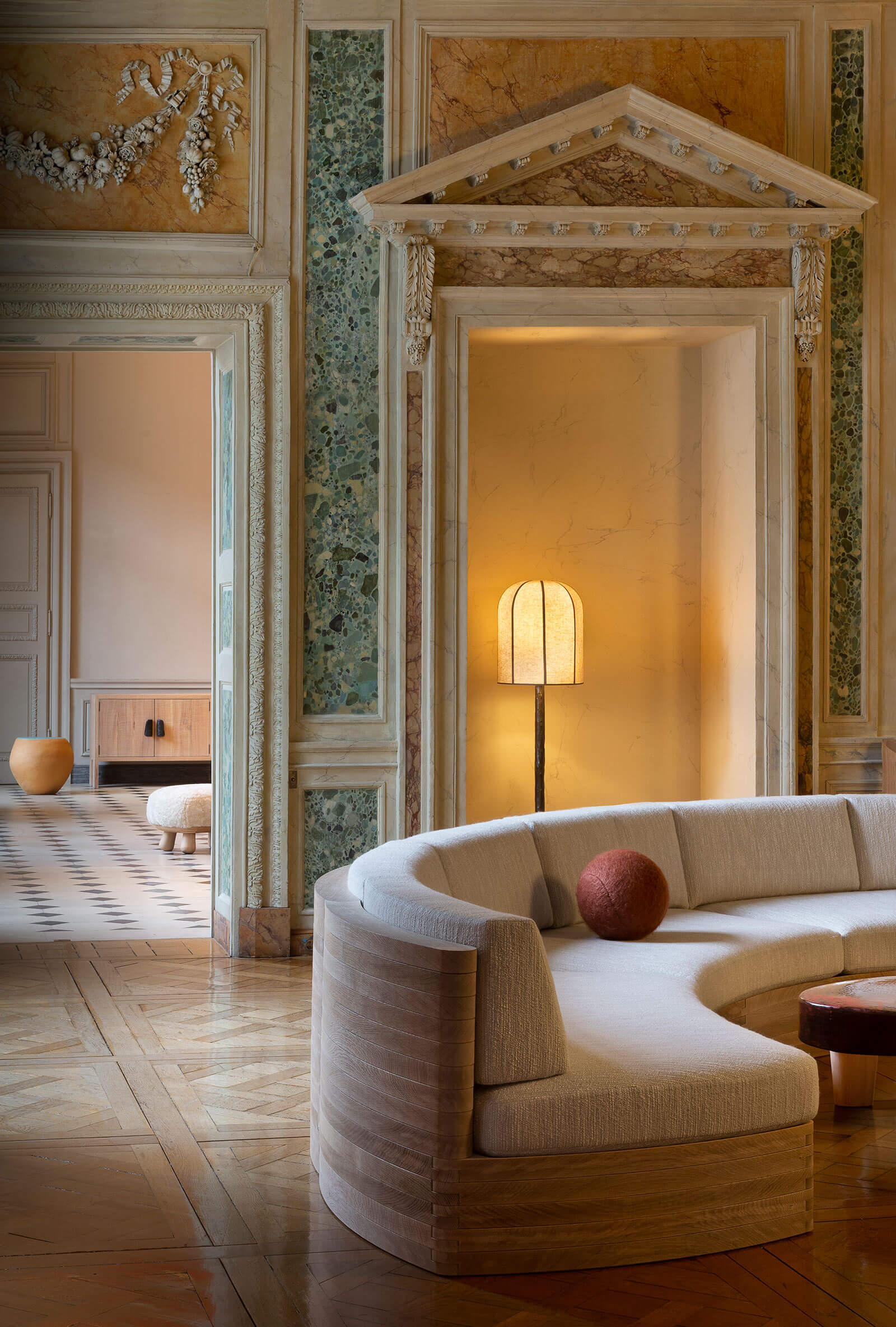 AS LIFE PICKS UP an energetic, post-lockdown pace, the streets of Paris are buzzing again.   Vaccination and the end of mandatory mask-wearing outdoors have encouraged citizens to venture out to socialise. Galleries and museums reopened in May with an abundance of exhibitions, including ‘Women in Abstraction’ at the Centre Pompidou. And the inauguration of the Bourse de Commerce – Collection Pinault, housing the collection of French luxury goods tycoon François Pinault, has injected a new dynamism into the Parisian art scene. The Design Edit highlights some of the exhibitions to catch. 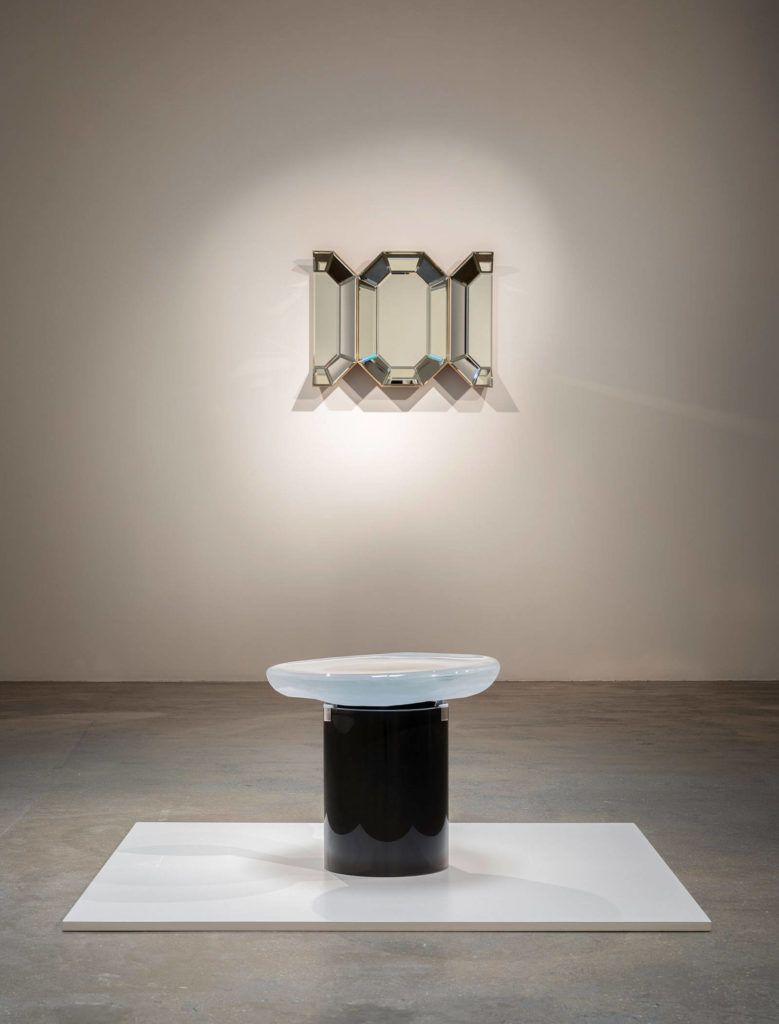 ‘Ceramics Now’ at Galerie Italienne
Contemporary ceramics are fêted in a group exhibition that is a riot of colour, shapes and texture. The eclectic assembly of works by 22 international artists of different generations – from established to emerging talents – affirms the continual appeal of ceramics as a field for experimentation. 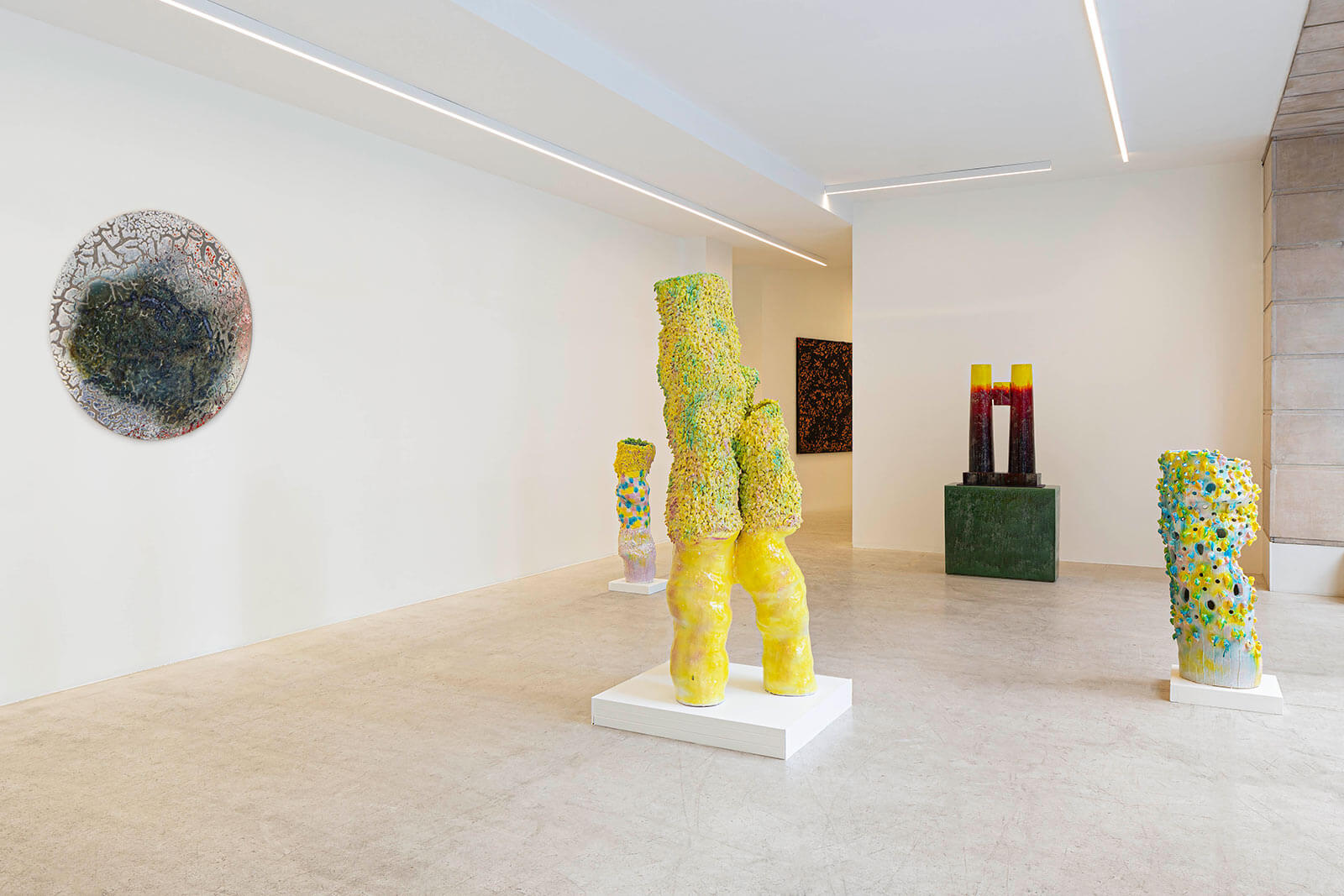 The selection is joyful and playful, if occasionally a little garish. Greeting visitors are Tamara Van San’s sherbet yellow, encrusted, large-scale sculptures that feel spontaneous and fun. Her work is juxtaposed with that of Johan Creten, whose prowess at mastering the medium is also evidenced in the next room. Creten’s ‘Brain Drain II’ (2015) wall sculpture, made for an exhibition at Perrotin which has loaned it, blazes with a myriad of petals, its golden centre turning into a deep sunset. Surrounding it are Jongjin Park’s meticulous compositions made from delicate layers of paper and clay, and Roger Herman’s sculptural pots. 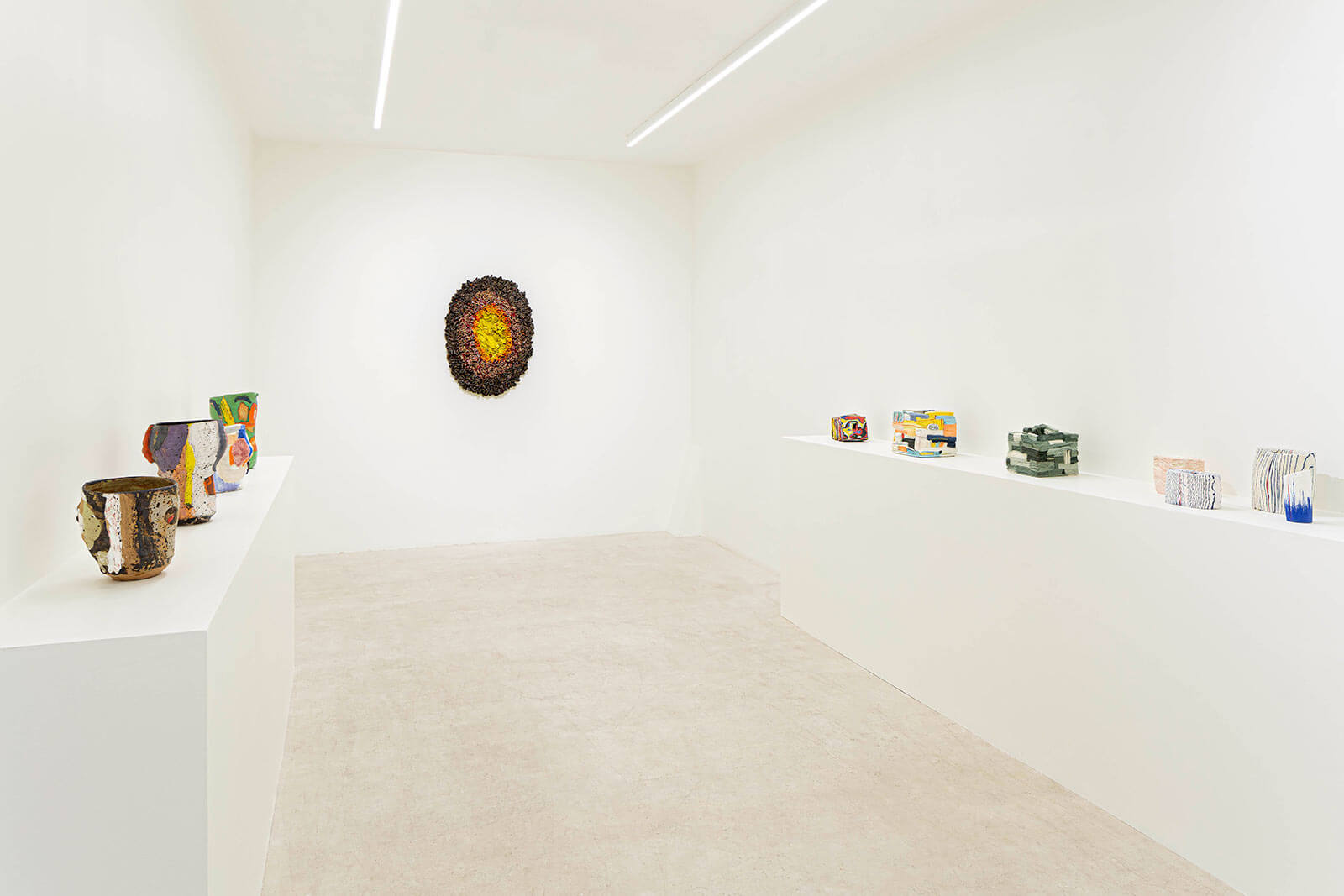 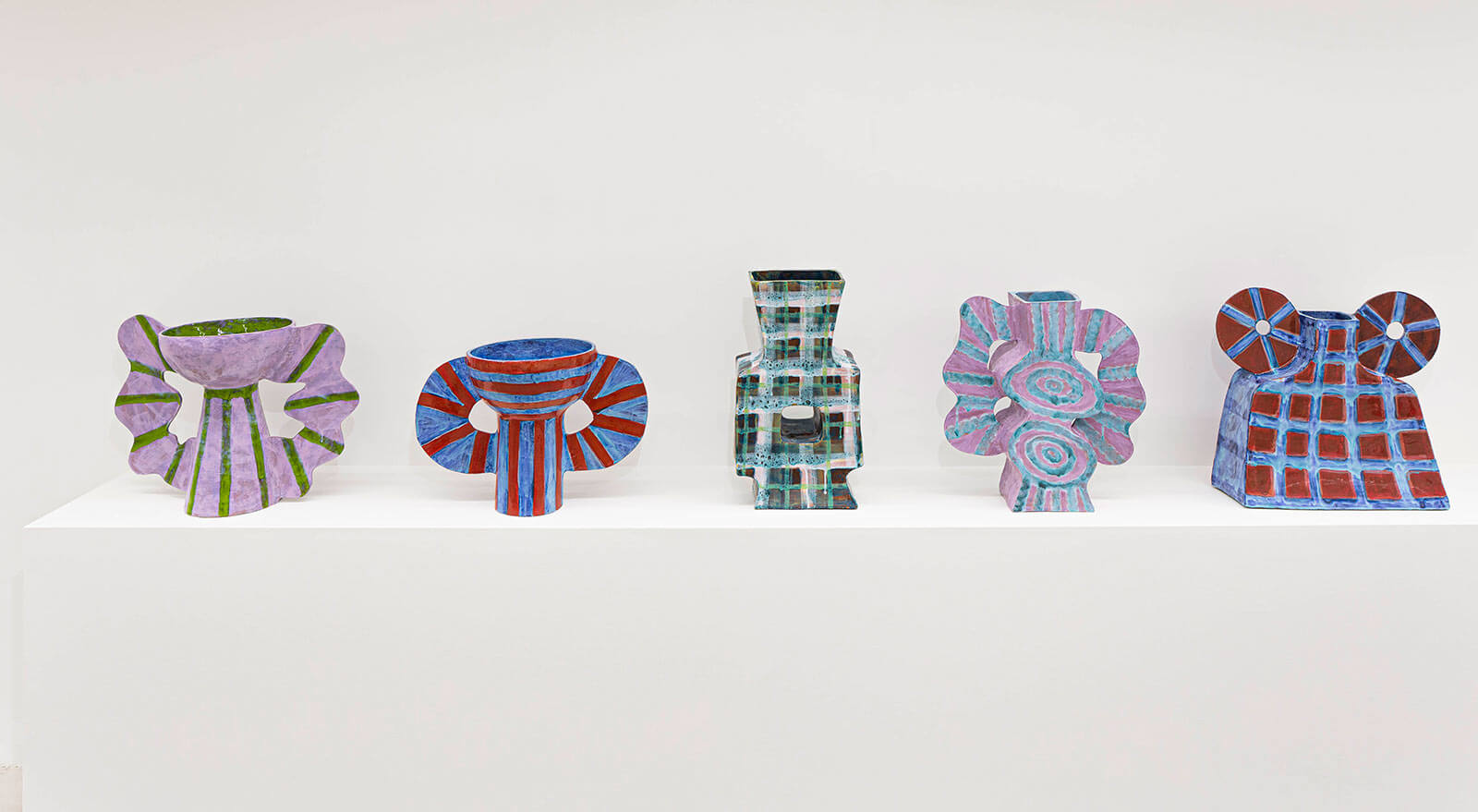 The exhibition has been curated by Raphaëlla Riboud Seydoux, who co-owns the gallery founded by her husband Alessandro Pron, and art consultant Florian Daguet-Bresson. It is aligned with Galerie Italienne’s repositioning since moving from eastern Paris to the Louvre district in 2015. After focusing on designers such as Gino Marotta and Johanna Grawunder, it has diversified to present artists from Andy Warhol to Jacob Hashimoto. The gallery’s support of Italian design is less paramount today. The focus on ceramics, however, is something that it plans to turn into an annual event.

‘Front: Seven Stories About Mirrors’ at Galerie kreo
After pandemic-induced exhibitions focused on the home, Galerie kreo is staging its first solo show of the Swedish duo, Front. The theme is the typology of the mirror, the history of which Front’s founders Sofia Lagerkvist and Anna Lindgren began researching in 2016. This took them on an intellectual journey delving into how mirrors were made centuries ago in ancient Rome, Murano and China. “We found amazing stories about how the mirror as an object had changed in so many different ways, symbolically as well as in terms of function and materials,” Stockholm-based Front says.

Their investigation starts with the small ‘Obsidian Mirror’, recalling how mankind first made mirrors 8,000 years ago by polishing volcanic rock. 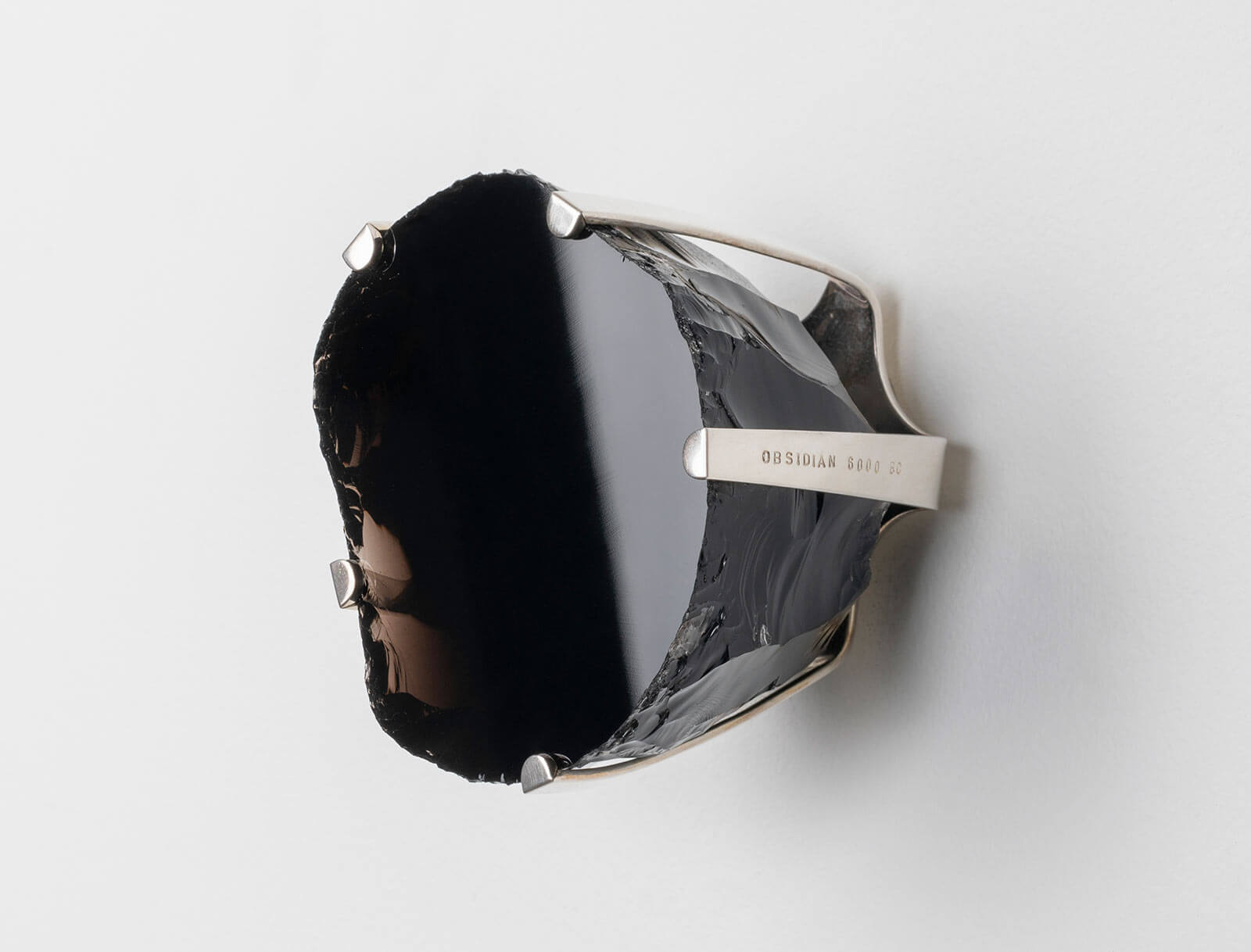 The triptych of ‘Bronze Mirrors’ hanging from cords alludes to how the Chinese attached small mirrors often bearing inscriptions onto their clothing with ribbons. Meanwhile, the ‘Convex Mirror Vases’ – gorgeous aluminium globes with cut-out circles – refer to the techniques used in ancient Rome. 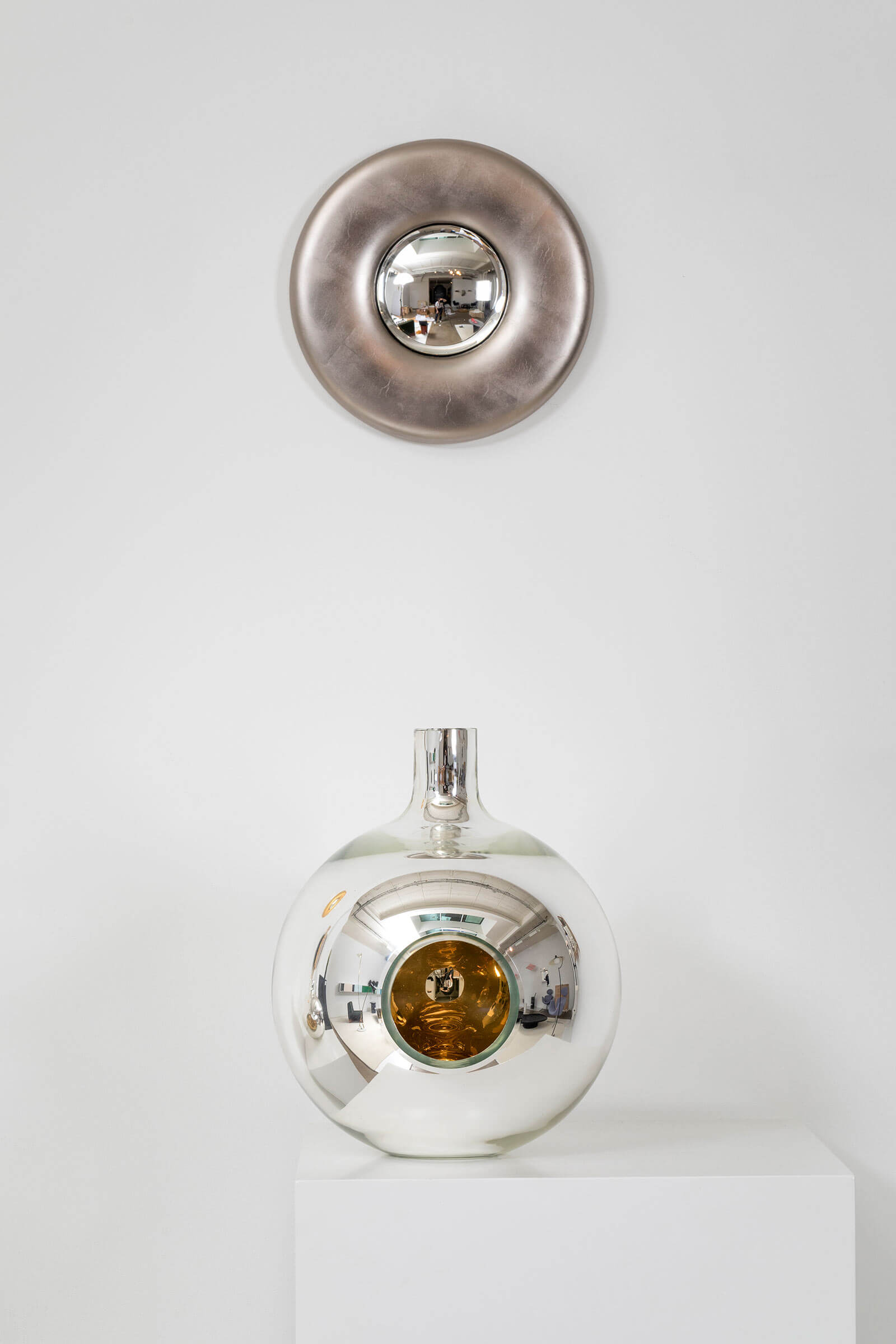 Unsurprisingly, ‘The Secret Mirror’ – a three-sided piece inspired by Murano – alludes to how the Venetian island’s glass blowing secrets were so closely guarded during the Renaissance that anyone divulging them faced execution. Indeed, Front travelled to Murano to visit the Barbini workshop, whose family traces its glassmaking to the seventeenth century. 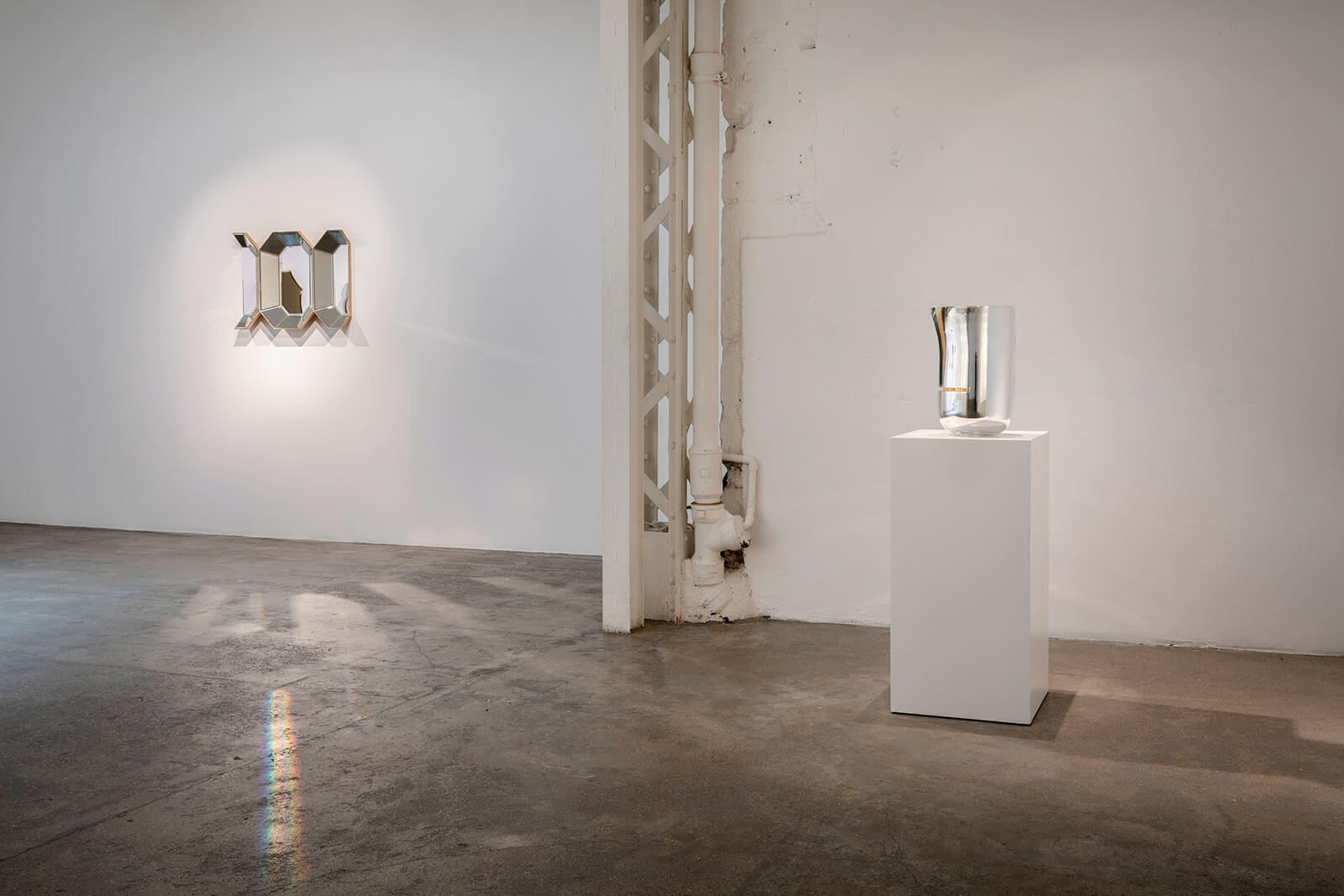 The three ‘Reflection Vases’ add a touch of poetry. Purplish-toned images of a gallery interior and a landscape have been carved onto the glass using Sweden’s Graal technique.

Mirrors are about vanity. But with mask-wearing still required in indoor venues, fewer visitors are taking Instagram selfies, allowing the mirrors to be admired for themselves.

‘Modernism Crystallized (Family Affair)’ at Maria Wettergren
Over a decade ago, Latvian-born designer Germans Ermičs became friends in Copenhagen with Daniel Berlin – who now works for architecture firm Snøhetta in Oslo – and his father Boris. Now the trio have reunited to collaborate on this show thanks to Maria Wettergren inviting Boris to exhibit and the latter including the others. The title, ‘Modernism Crystallized’, points to how they experiment with geometry, illusion and appearance versus disappearance. 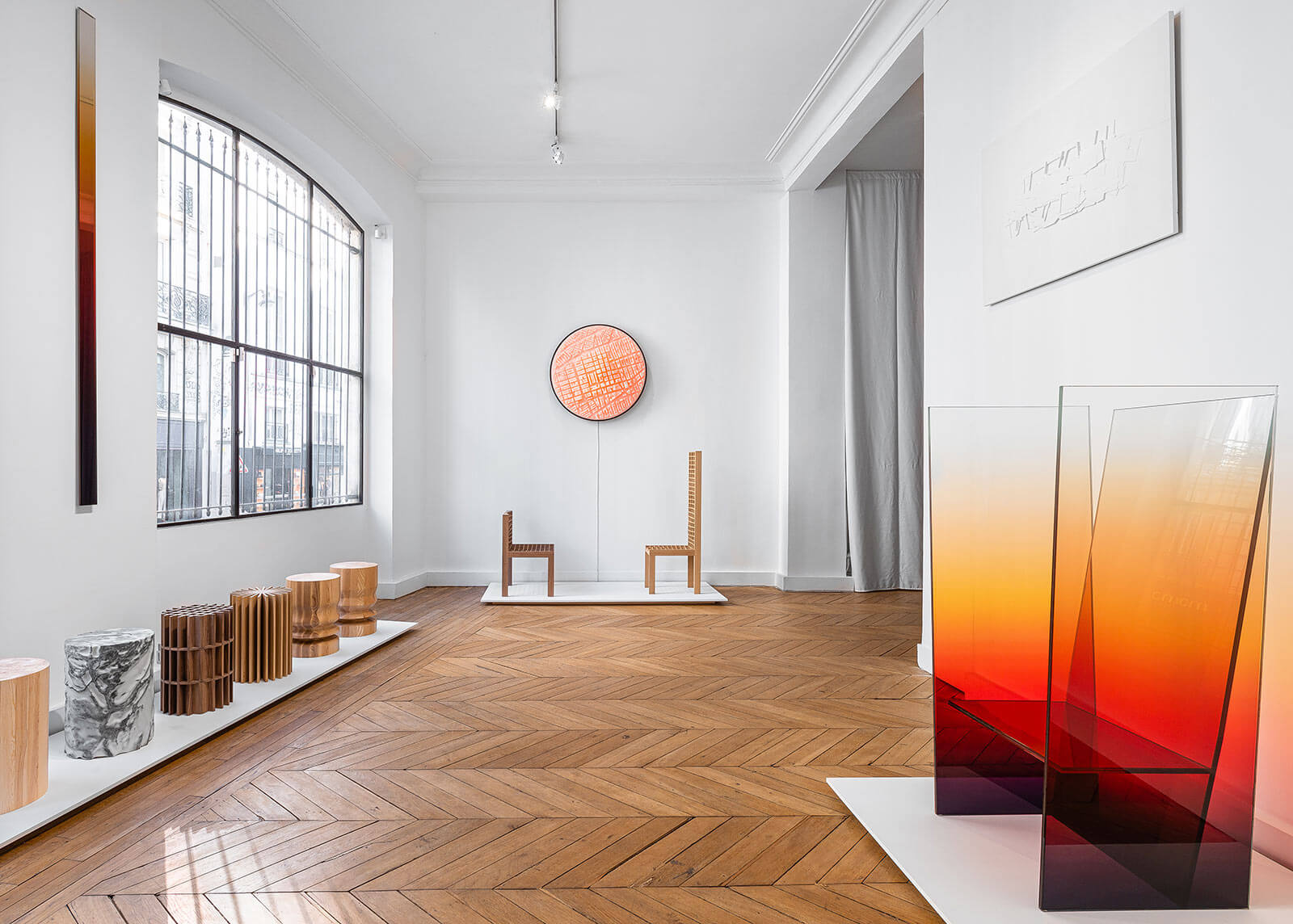 The centrepiece is Ermičs ‘Sunburst Tall Glass Chair’ in black-red-yellow gradations that was made for the exhibition. Its three chromatic panels only touch near the bottom, giving the precarious impression that they’re about to fall apart and shatter. The throne-like piece is his second chair following ‘Ombré Glass Chair’ (2017), made in tribute to Shiro Kuramata’s iconic ‘Glass Chair’ from 1976.

Ermičs also teamed up with Boris Berlin to create the ‘Black Mirror’ table, which reflects the herringbone wooden floorboards yet dissolves into the curtain behind. Above it hangs Boris and Daniel Berlin’s spherical ‘City Light’, cast on the grid of Manhattan, which is a play on the city that never sleeps. 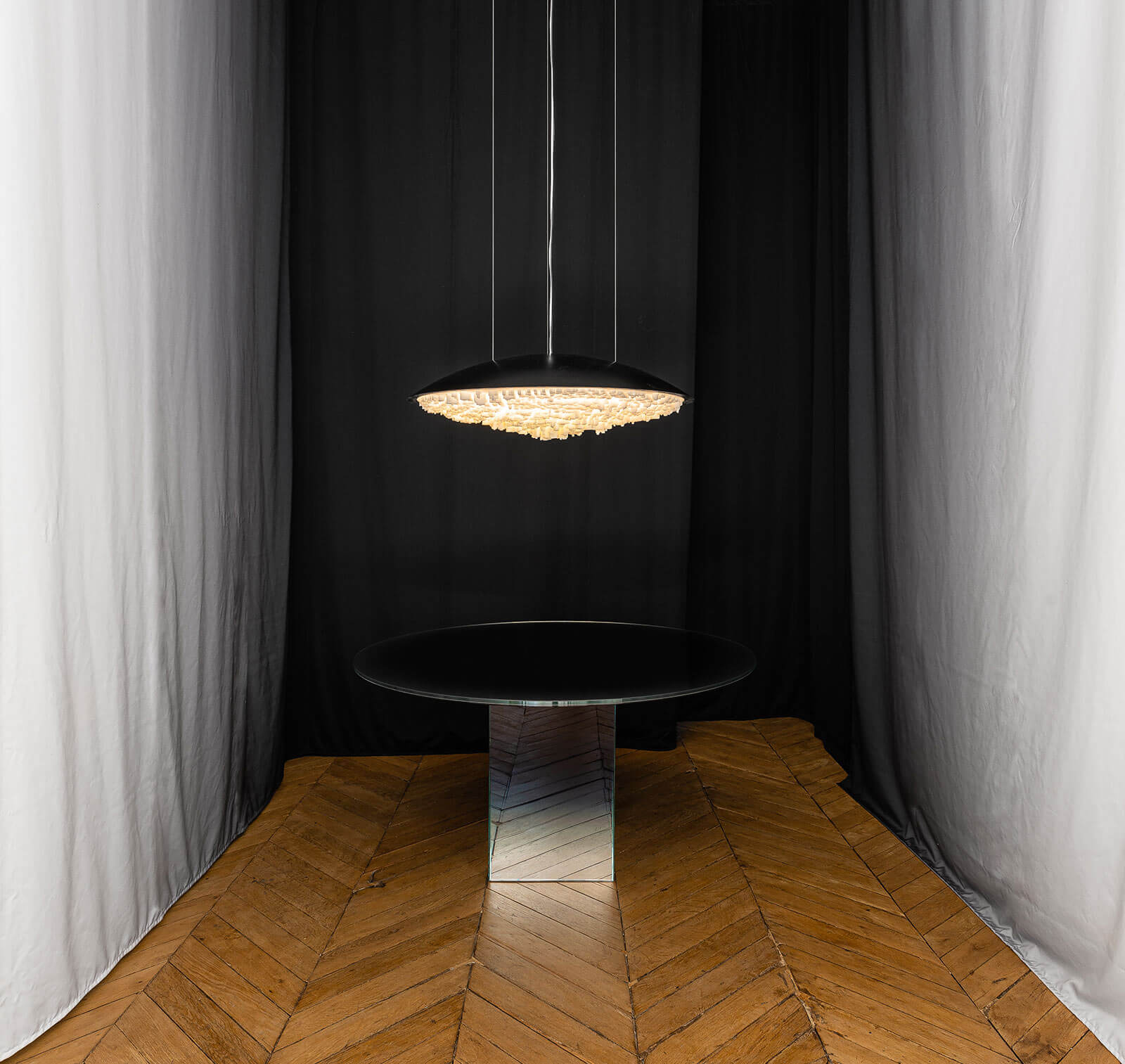 There’s disruption, too, in Boris Berlin’s gridded wooden chairs, the undulations evoking the imprint that a sitter might make. “The human body is something that is opposite to the striving for order,” Berlin says, laughing.

Nearby, a line of stools conveys the ‘Family Affair’ aspect of the exhibition title. Uniform in size, they were made by each designer individually. In the middle is Ermičs’ marble stool with striking incisions following the veins of the smooth stone. This sees Ermičs, known for seductive works in glass, exploring another material in this interdisciplinary show. 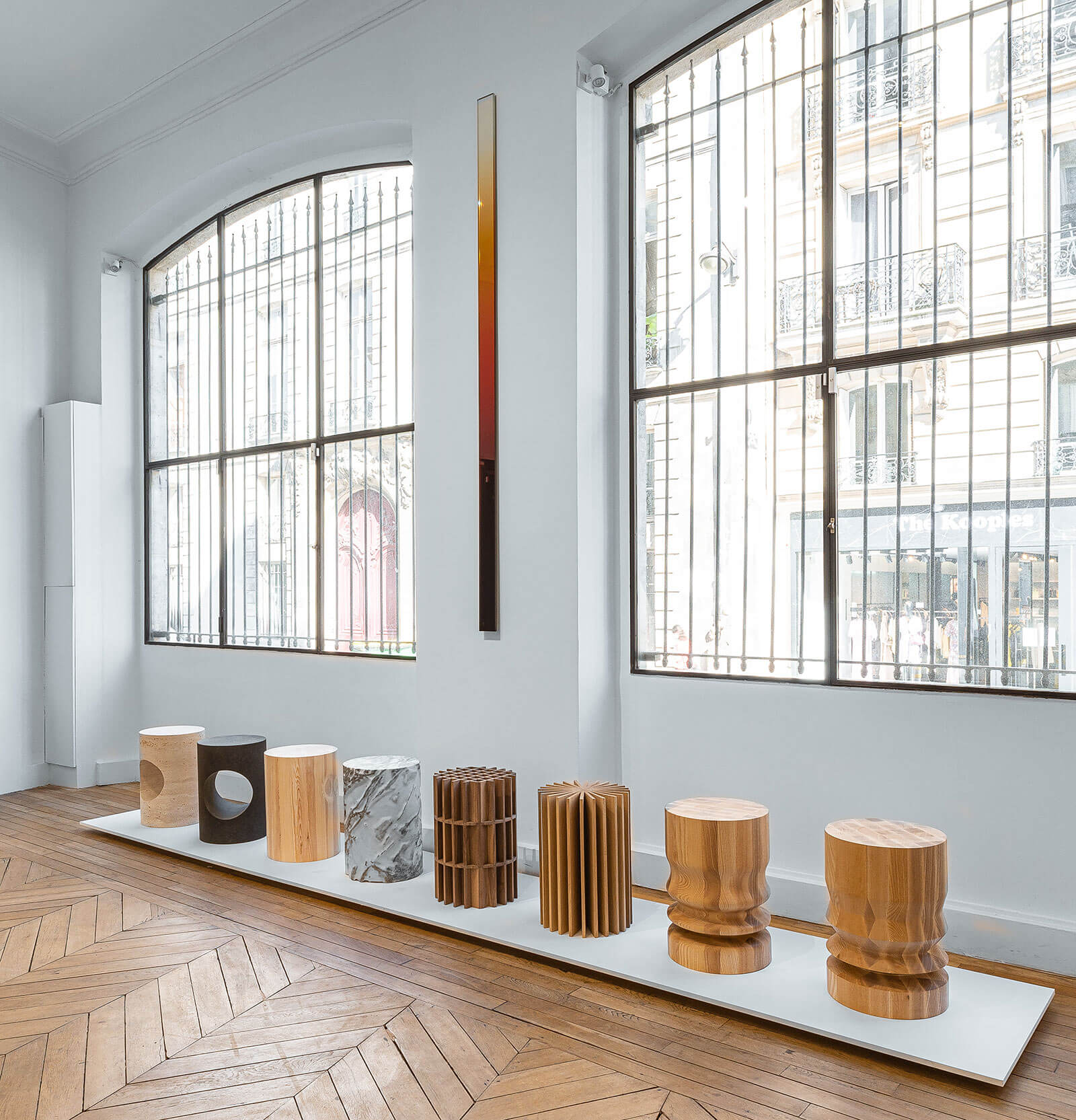 ‘Pierre Yovanovitch Mobilier’ at the Place des Vosges
The French interior designer Pierre Yovanovitch unveiled his eponymous furniture brand, the realisation of a “longstanding dream”, on the historical Place des Vosges in the Marais last month. The beautiful frescoes and ornate walls of the architecture academy lent a sophisticated backdrop to the presentation of Pierre Yovanovitch Mobilier. Yet, it was the countryside of Provence in the south of France that inspired the furniture line’s organic, timeless shapes. “Being at home in Provence during lockdowns was rejuvenating, as I found inspiration in the surrounding nature every day,” says Yovanovitch, who grew up in the region. 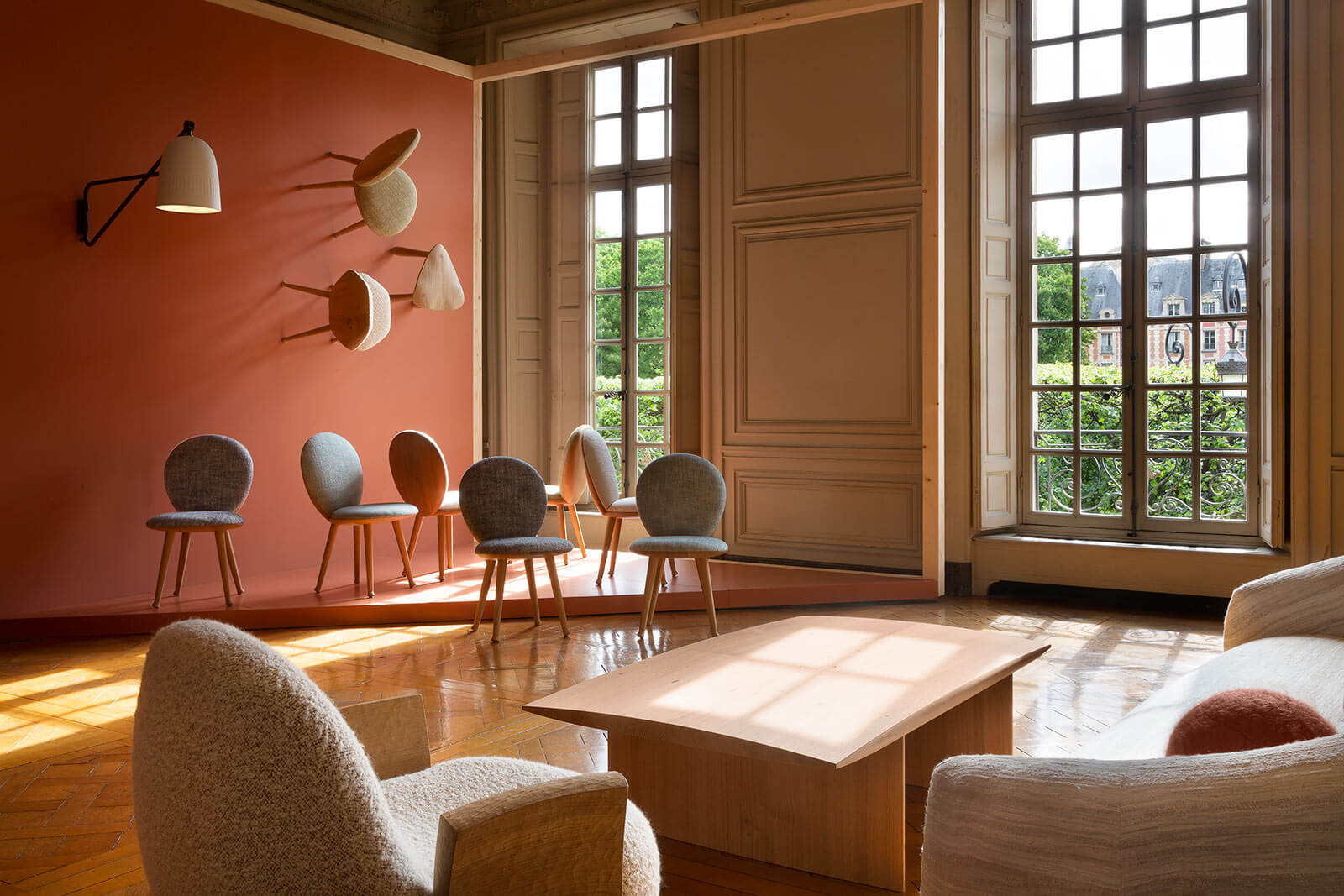 The sunlight, sunsets, forests and lavender filtered into his ideas for the collection. The soft and asymmetrical shapes of the furniture evoke the irregularity found in nature while the palette comprises rich, earthy and stone-based tones.

Made by French craftsmen and a Swiss glassmaker, the line furthers Yovanovitch’s ‘Made in France’ approach to design. He has moved outside his comfort zone of wood to incorporate polished bronze, gypsum and patinated metals. Most materials are locally sourced, such as woods from eco-certified forests, and as natural materials inherently contain slight variations, no two pieces are identical. 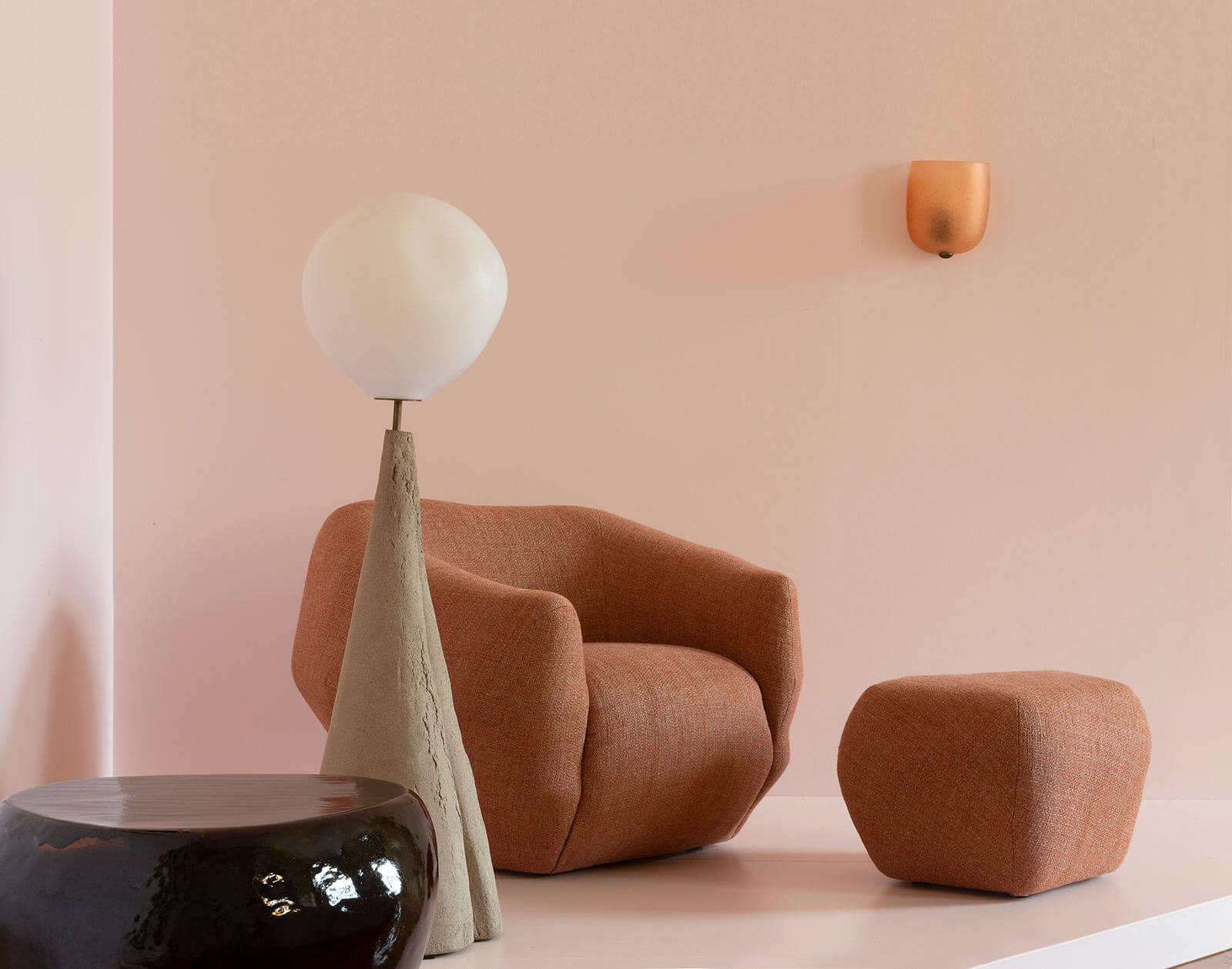 Yovanovitch, 55, had previously created furniture for interior commissions and R & Company in New York before plucking up the courage to launch his own brand. “In many ways, the pandemic strengthened our desire to launch it,” Yovanovitch reflects. “With people spending more time at home than ever before, there seemed to be a renewed energy around interior design and the furniture we surround ourselves with every day.”

Pierre Yovanovitch Mobilier is at the designer’s showroom, 6 rue Beauregard, 75002 Paris, by appointment only. 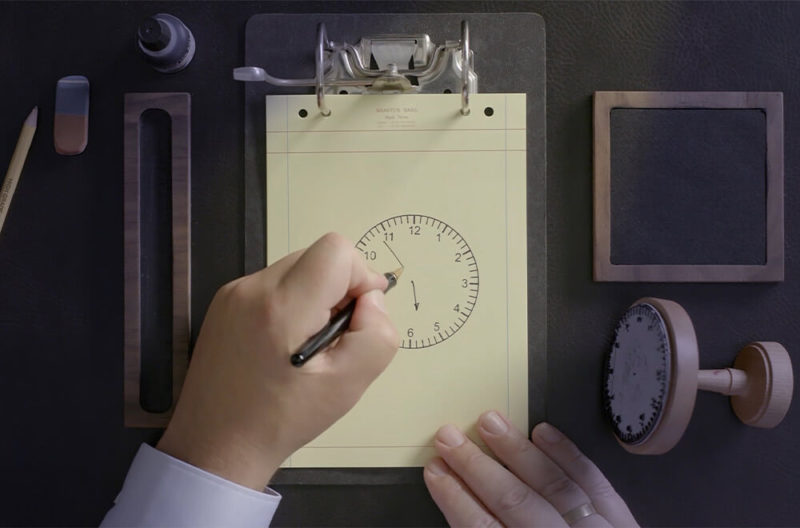 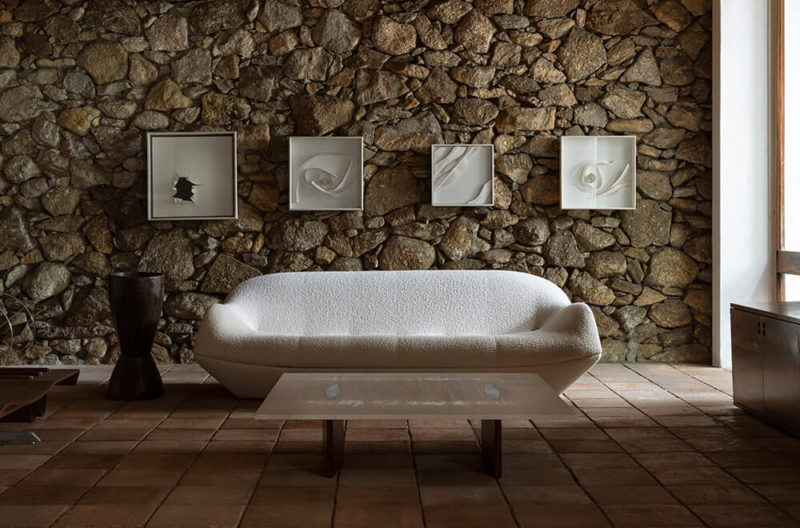 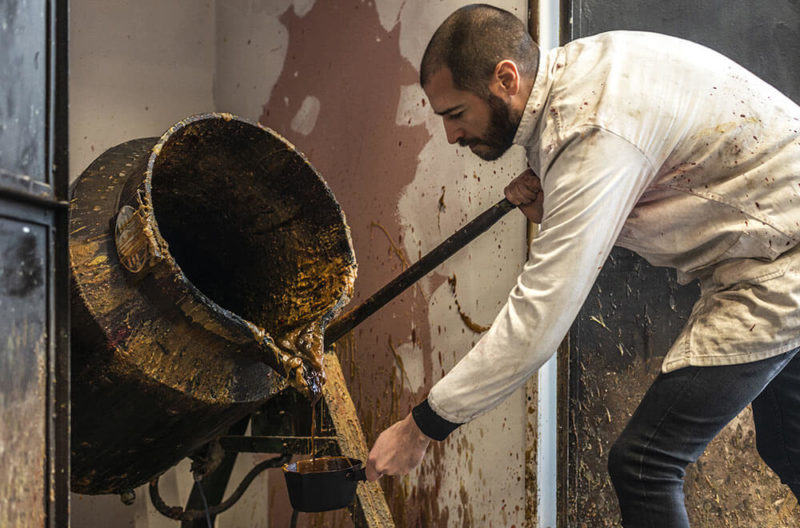 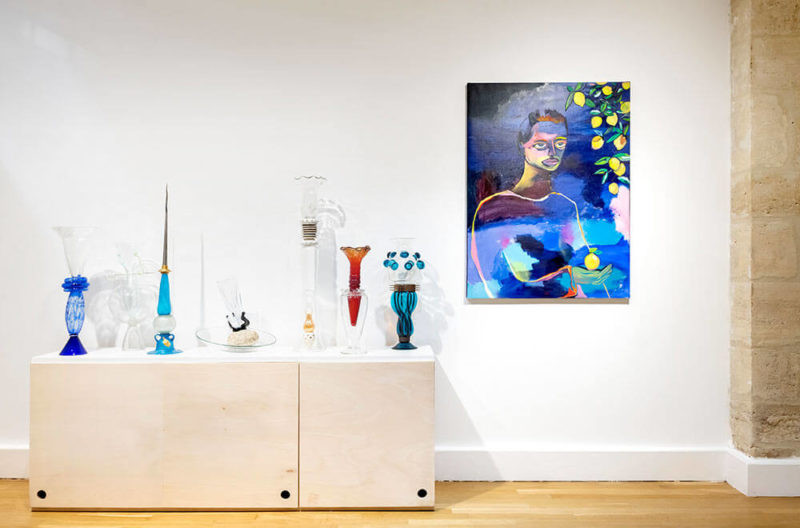