Artists’ Jewellery from Picasso to Koons: The Diane Venet Collection

Collecting, collaborating and sometimes gently persuading – the story of how Diane Venet brought together jewellery made by leading artists of the past century. 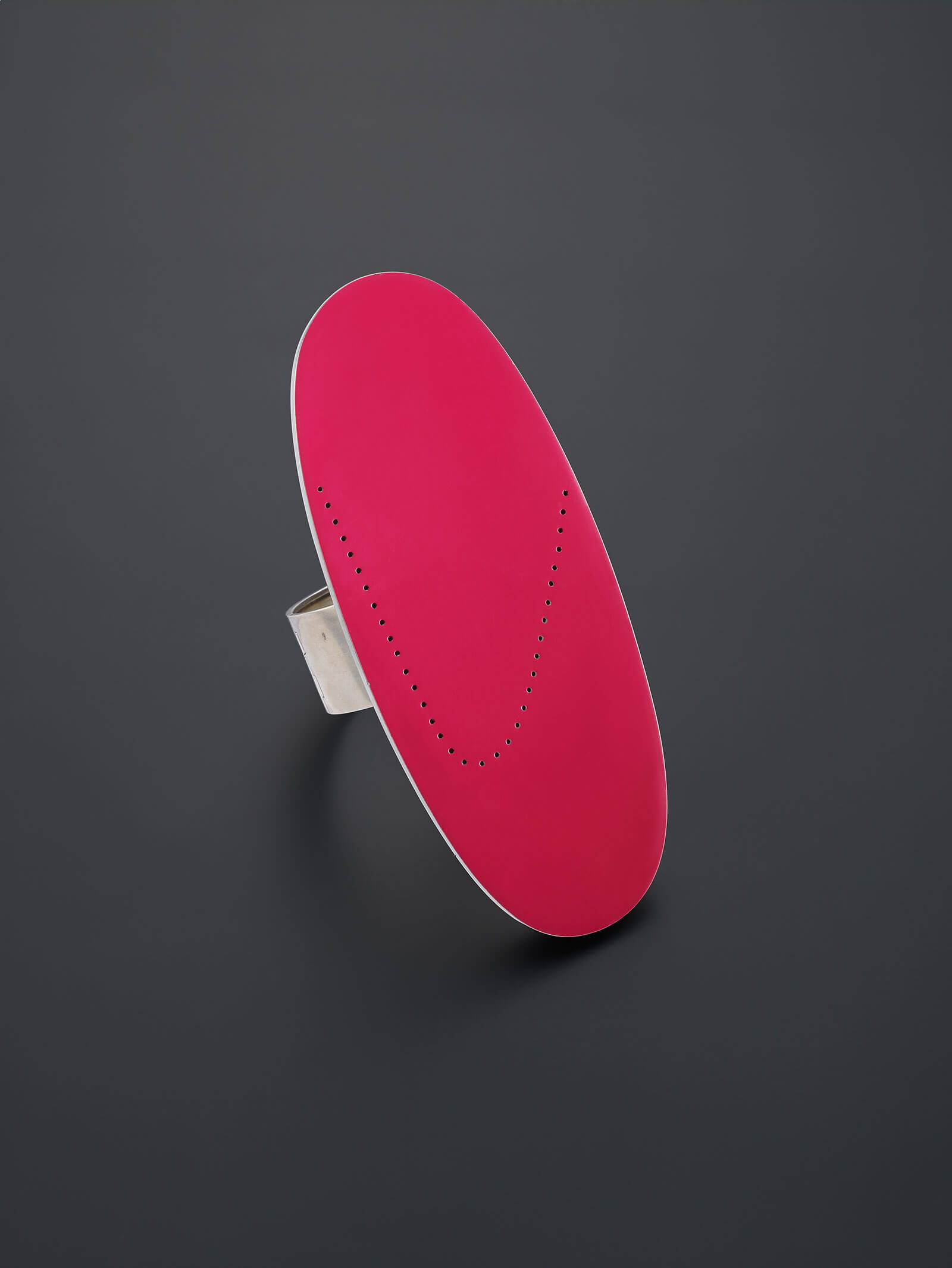 ONE FINE DAY in New York in 1967, Diane Venet was visiting art galleries with a friend when Roy Lichtenstein’s brooch of a woman’s face in primary colours caught her eye. That purchase was the precursor of her decades-long obsession with artists’ jewellery that was sparked by her husband, the artist Bernar Venet, wrapping a band of silver around her finger as an engagement ring when he was courting her in 1985. Today, Venet has more than 200 pieces of artists’ jewellery in her collection. After previous exhibitions at the Museum of Arts and Design in New York and the Musée des Arts Décoratifs in Paris, 180 pieces are currently on show at the Grimaldi Forum in Monaco. 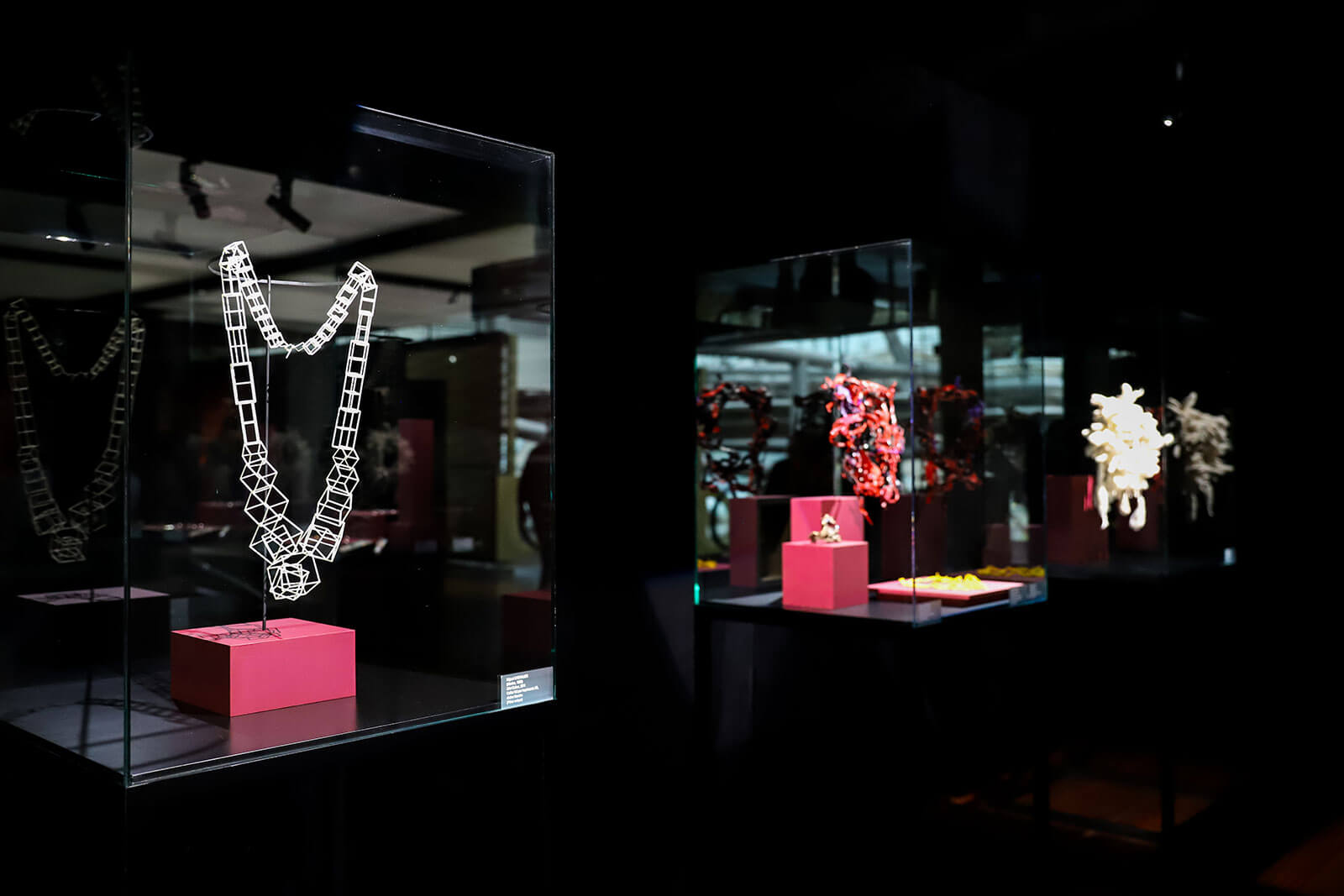 The exhibition offers a journey through the history of Modern and Contemporary art in the form of artists’ jewellery. The works are clearly a continuum of each artist’s visual language: from Picasso’s ‘Le Grand Faune’ gold pendant of a smiling fauna face, to Jeff Koons’ ‘Rabbit’ necklace – by way of Andy Warhol, Hiroshi Sugimoto, Victor Vasarely, Louise Bourgeois and Yayoi Kusama. 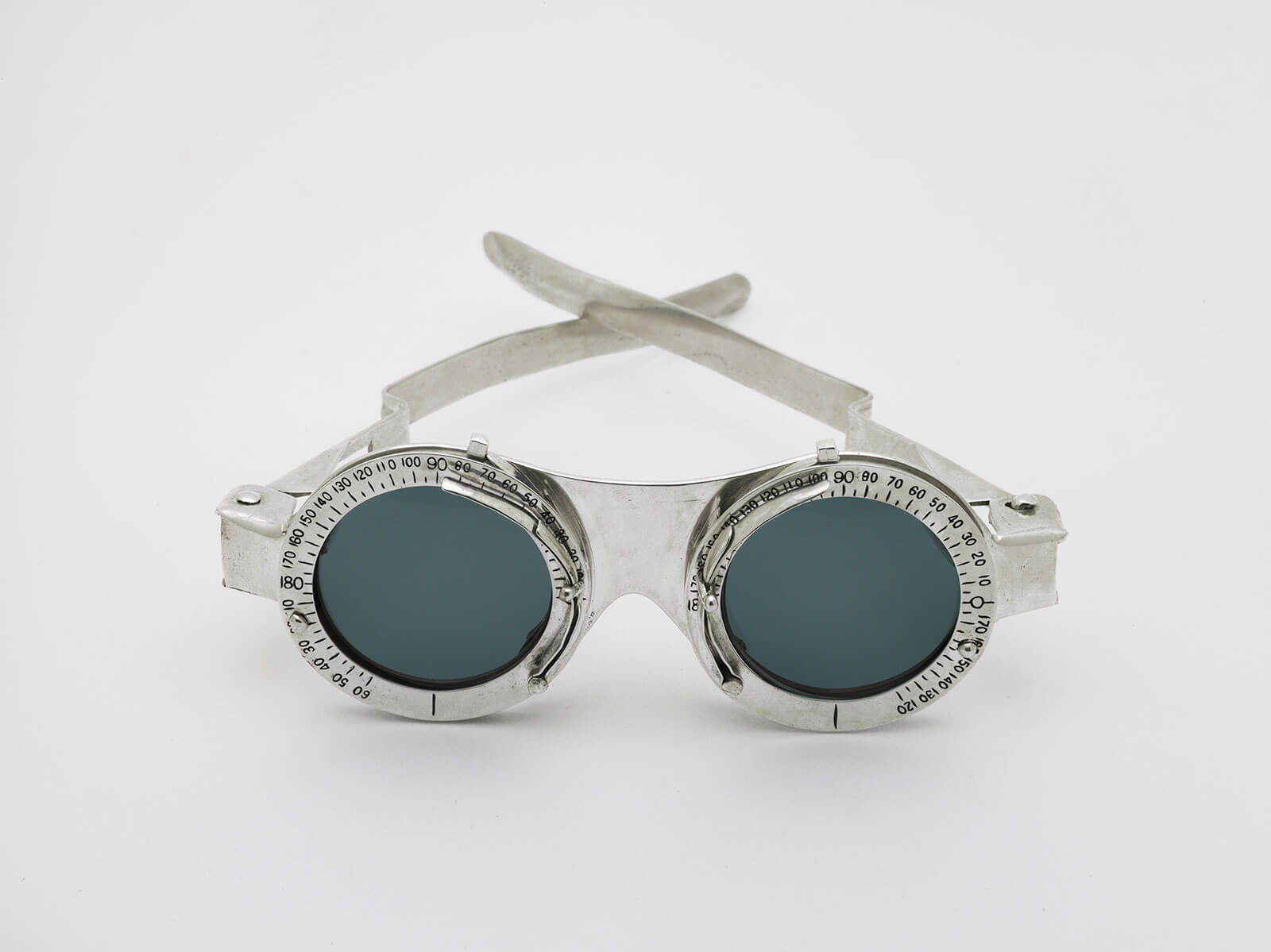 “Pieces of artists’ jewellery are miniatures of their work,” Venet says. “I’ve never worn fine jewellery with diamonds, apart from a small ruby ring from my mother. In my mind, I don’t wear a piece of jewellery but an artwork that I choose according to my mood, where I’m going and who I’m meeting. If I’m going round to a collector’s and I know they have Koons in their collection, I’ll wear my Koons necklace, which was produced by Stella McCartney and that I obtained thanks to [the late gallerist Joan] Sonnabend.” 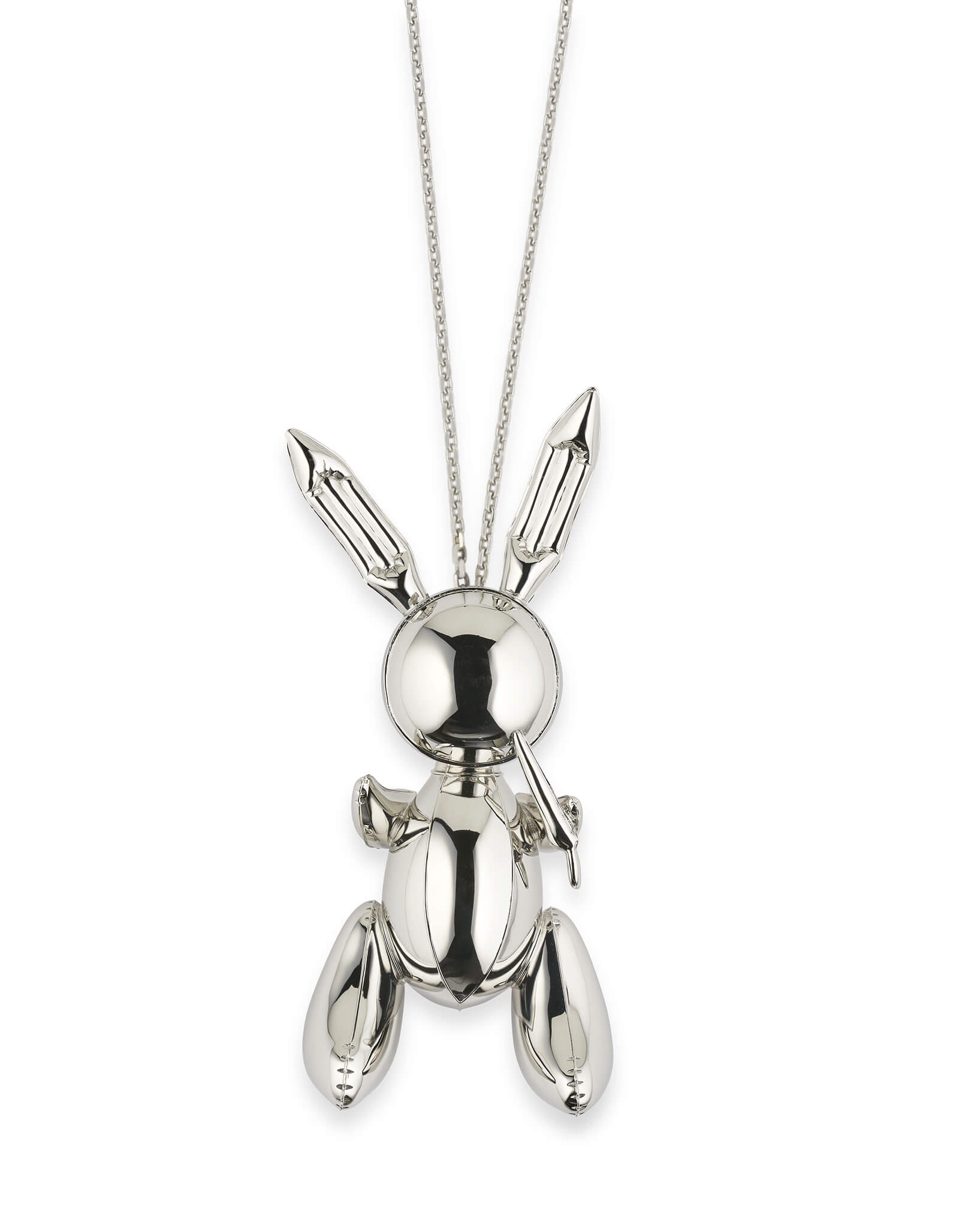 Venet’s collection took off in the late 1980s/early 1990s, thanks to her husband giving her pieces by Arman and César and introducing her to other artists. “Once, I was at Robert Rauschenberg’s exhibition opening in New York and he and his assistants were all wearing a brooch,” Venet reminisces. “Bernar said to him: ‘Diane is starting a collection. Would you like to make a brooch for her?’ He replied: ‘Come round to the studio tomorrow.’”

Also pivotal to Venet’s aspiration was her encounter with Joan Sonnabend who exhibited artists’ jewellery at her Sculpture to Wear gallery at New York’s Plaza Hotel. “She sold me several pieces from her collection, [such as work from] Picasso, André Derain, Max Ernst and Man Ray,” Venet says. “And when I accompanied my husband on trips for his exhibitions worldwide, I looked everywhere and asked his artist friends to make pieces for me.”

Not every artist willingly rose to the challenge. “Frank Stella refused – he’d never made any jewellery for his wife or anybody else,” Venet recounts. “Bernar told him: ‘Just go into your studio and pick up a piece of junk.’ Some time later, we went for dinner at Frank’s and he opened a drawer and, wrapped in a newspaper, was the prototype of the necklace that I’m exhibiting.” Made in gold-painted metal, the geometric, abstract piece from 2009 during Stella’s ‘baroque’ period is composed of several intertwining loops. Stella went on to create a limited edition large polished gold ring, made of 28 parts painstakingly welded together. 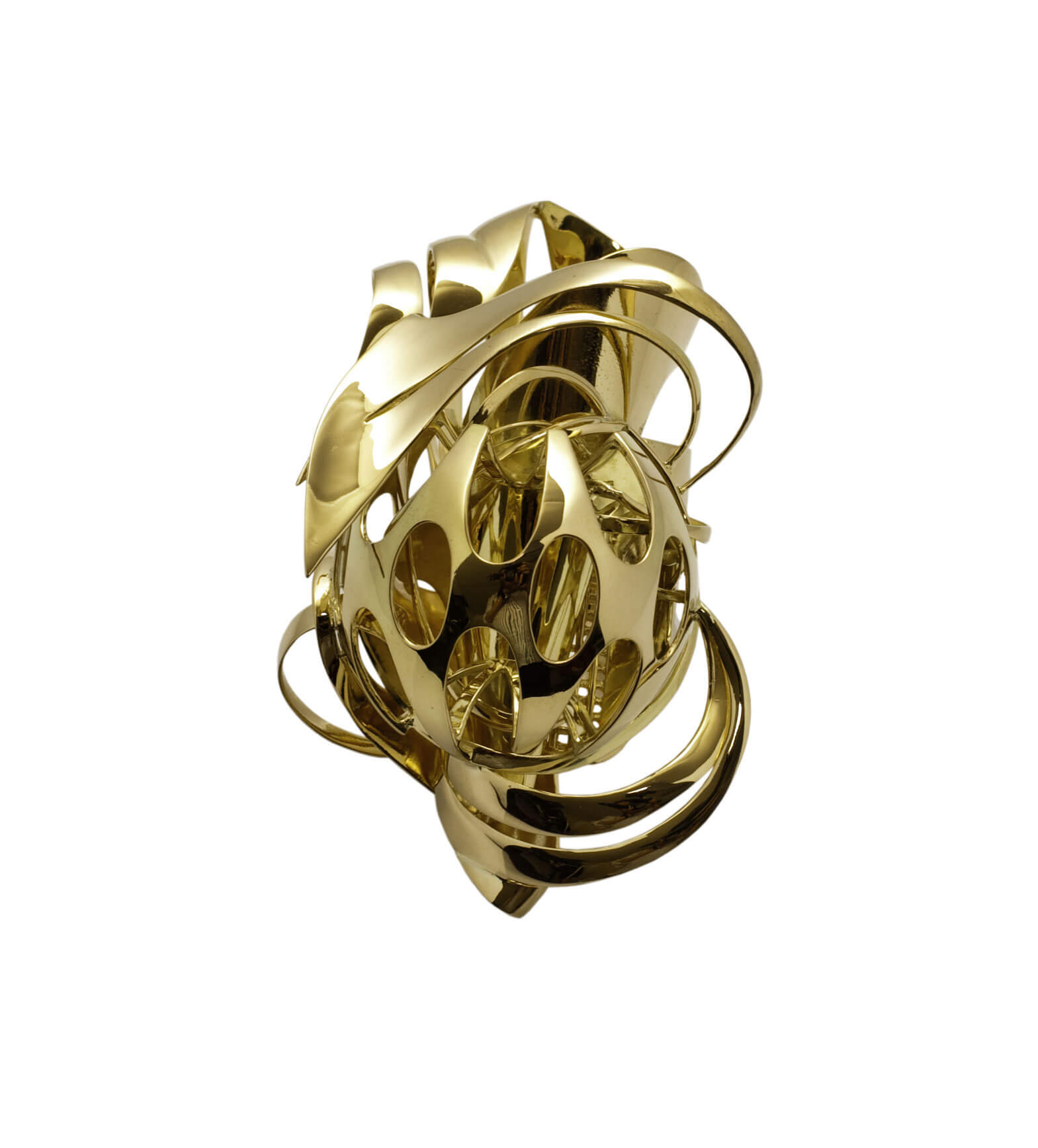 Indeed, artists approach jewellery very differently from a jeweller. Rather than primarily thinking of materials and precious stones, an artist will think of the idea they wish to express from a deeply personal perspective. For instance, Larry Bell’s ‘Luxite (Beach Glass) Stone’ (2021), a glass pendant on a gold necklace, its colour shifting according to the light, reflects the American artist’s lifetime engagement with light, as a pioneer of California’s Light and Space movement. Meanwhile, Rashid Johnson’s ‘Gold Signet Ring (Anxious Men)’ (2020), with a ruby on a black mouth, brings to mind incidents of police brutality. 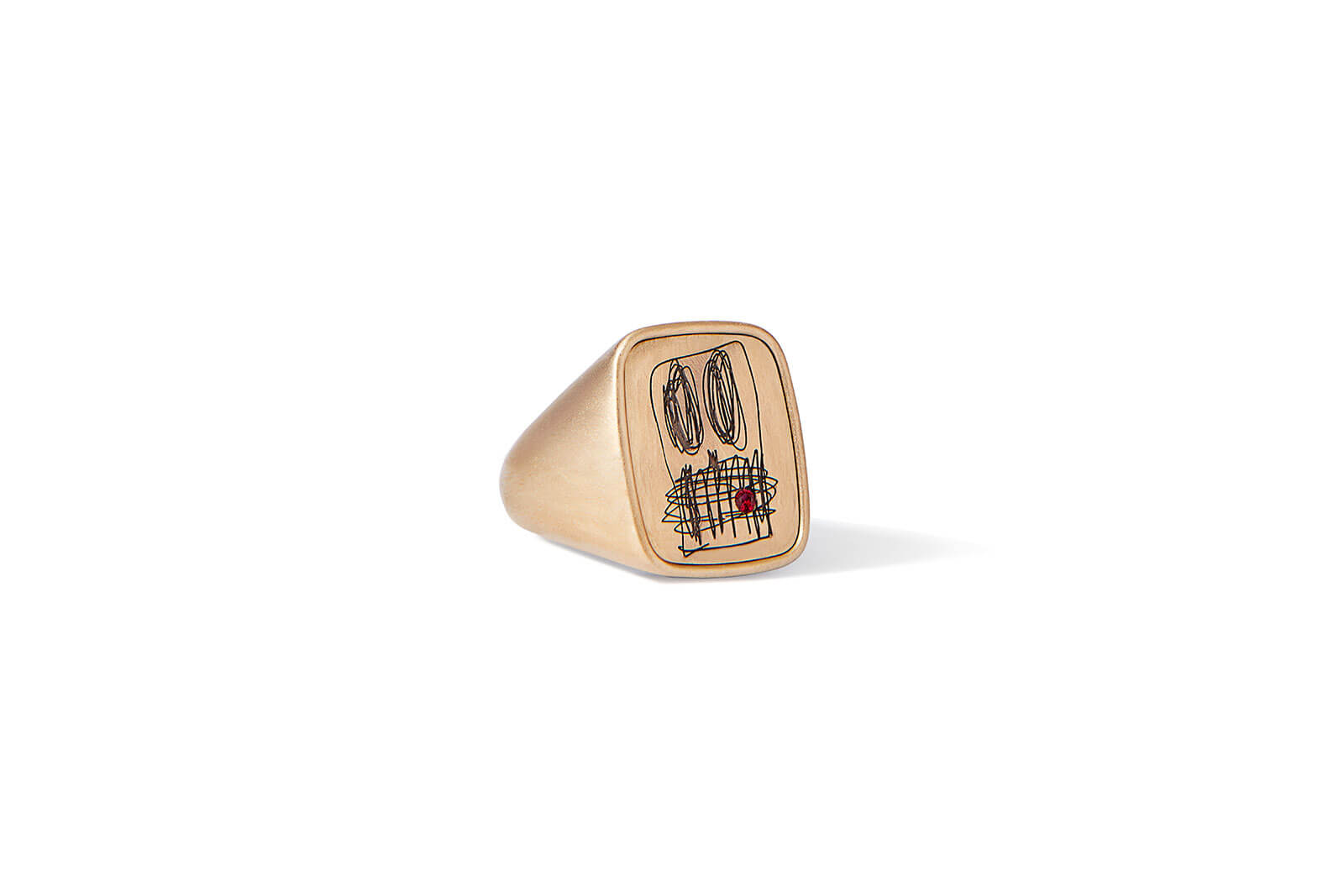 For some artists, making a piece of jewellery will come instinctively, if rarely. “The French painter Claude Viallat, a fantastic colourist, told me that he’d never made jewellery and then one day in the post, I received a unique necklace that he’d made from rope that he’d painted in a bright yellow that he uses in his canvases,” Venet says. “I love that because it’s part of the intimacy and story [behind the piece].”

For others, the visual idea will come but the artist may not know how to realise it. “Artists don’t have the techniques or savoir-faire to make jewellery,” says Venet, who has two studios that make jewellery for her in Greece. Some artists reach out to her specifically as they would like her to help them produce something. 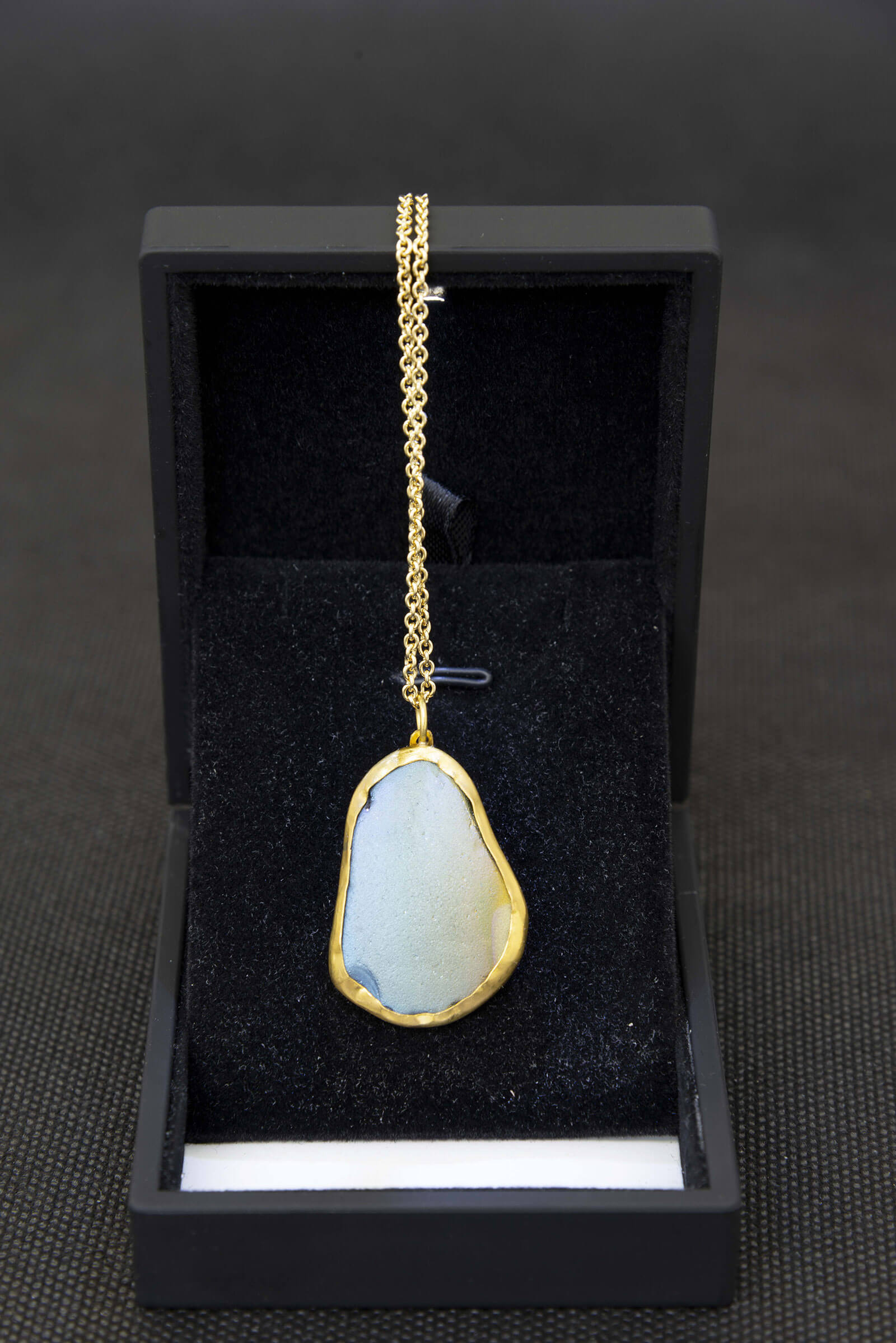 “Andres Serrano contacted me in New York and said: ‘I’ve never made jewellery, I’d really like to make some with you.’” The American photographer, infamously known for ‘Immersion (Piss Christ)’ (1987) – a vivid red-yellow image of a crucifix statuette submerged in his own urine – showed Venet some drawings and she connected him to an atelier in Paris. This culminated in the gold ‘Crucifix Ring’ (2015) which features thick lines twisting round a crucifix.

On another occasion, Venet worked with Orlan, a friend of hers, on ‘Tête de Fou’ (2010), a gold-and-silver brooch based on an image from the ‘African Self-Hybridization’ digital photomontage series in which Orlan imagines herself with spiralling plaits. By contrast, Portuguese artist Joana Vasconcelos had made jewellery early on in her career and the 1994 silver brooch on display is the emblem of her foundation in Lisbon. 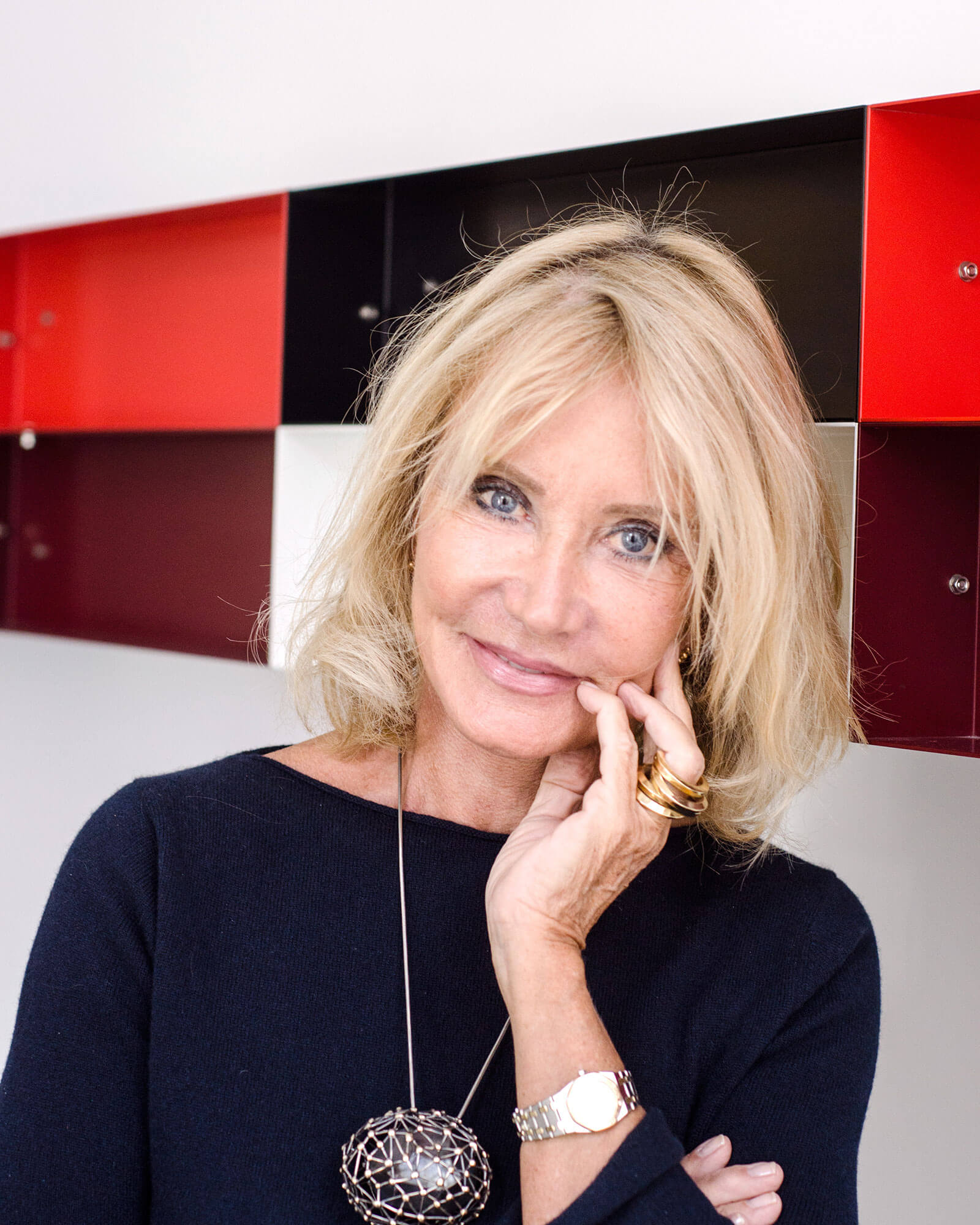 Now based in the south of France, Venet also buys works from dealers such as Louisa Guinness in London. It was through Guinness that Venet came by Grayson Perry’s ‘Doll Pendant’ (2008), a silver doll in an embroidered dress. “It made me laugh because when one lifts up the skirt, one sees that it’s a man underneath,” chuckles Venet, referring to how Perry references his alter-ego, Claire.

Which other pieces on show are particularly special? “The Dalí was difficult to find – it was in a gallery – and as I looked so hard for it, I treasure it a lot,” Venet says, referring to Dalí’s ‘Montre petite cuillère’ (1957), a hairpin in the form of a watch-spoon with a comb down the side. 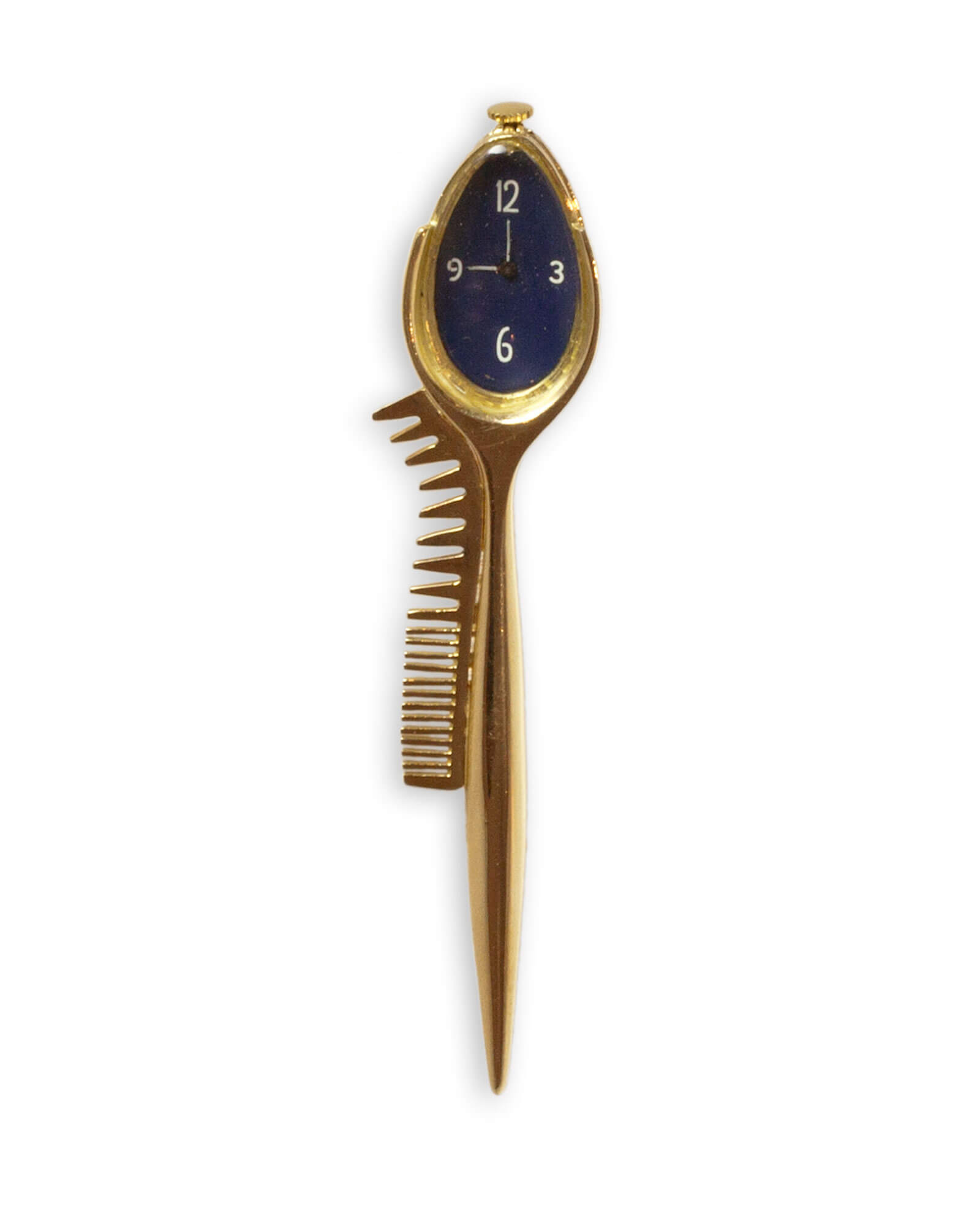 “And the Faust Cardinali [Pesce fuor d’acqua]; it’s difficult to wear but magnificent. I like big pieces that express the character of the artist.” While her collection is extensive, it’s missing some imaginary creations: “I’d have loved to have a piece of jewellery by Brancusi or Miró but I don’t think they made any.”

Exhibiting her collection is Venet’s way of sharing it with others. “It’s not to satisfy an ego but because it’d be so sad just to have it in a safe or in drawers,” she explains. 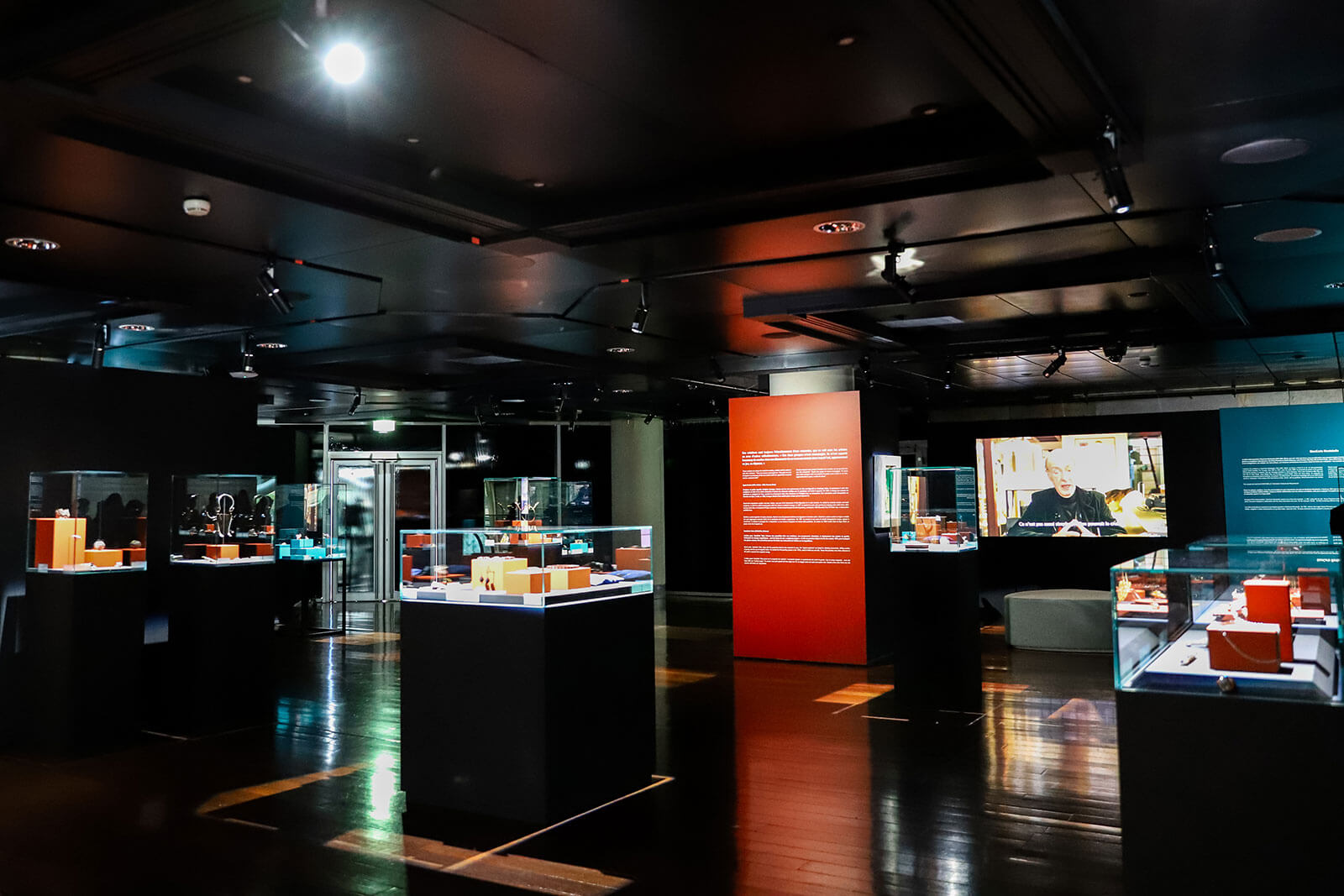 Artists’ Jewellery from Picasso to Koons at the Grimaldi Forum Monaco 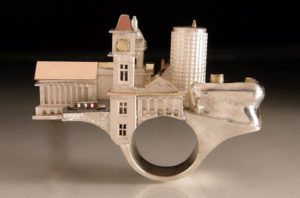 People
Jewellery Collectors
One brooch, then another, before too long it's a collection. Four connoisseurs reveal why ...
By Charlotte Abrahams 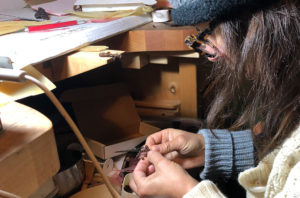 In The Studio
Darcy Miro
The metals artist unveils a new collection, inspired by coral and animal scales.
By Adrian Madlener
The Design Edit
For Collectors and Dreamers
Read
Connect
Legal
Join Our Bi-monthly Mailer
Follow and Share
© 2021 The Design Edit.
All Rights Reserverd