TIMES CHANGE. BACK in 2000 Ron Arad suggested that there were five processes available to the product designer: wasting (or cutting a material away), moulding, forming, assembling – and finally a relatively new fangled notion he described as ‘growing’. Back then he was referring to rapid prototyping – or ‘3D printing’ as it came to be known. More recently though the term has taken on a more biological, rather than digital, meaning. One of the early pioneers was Tomáš Libertiny, who in 2006 constructed vase-shaped beehive scaffolds and allowed nature to do its thing. Bees created a hive and made the ‘Honeycomb Vase’ in a process the designer dubbed ‘slow prototyping’. Following in these footsteps, a new generation of designers are working with an intriguing palette of materials to literally grow objects as you and I might cultivate tomatoes. 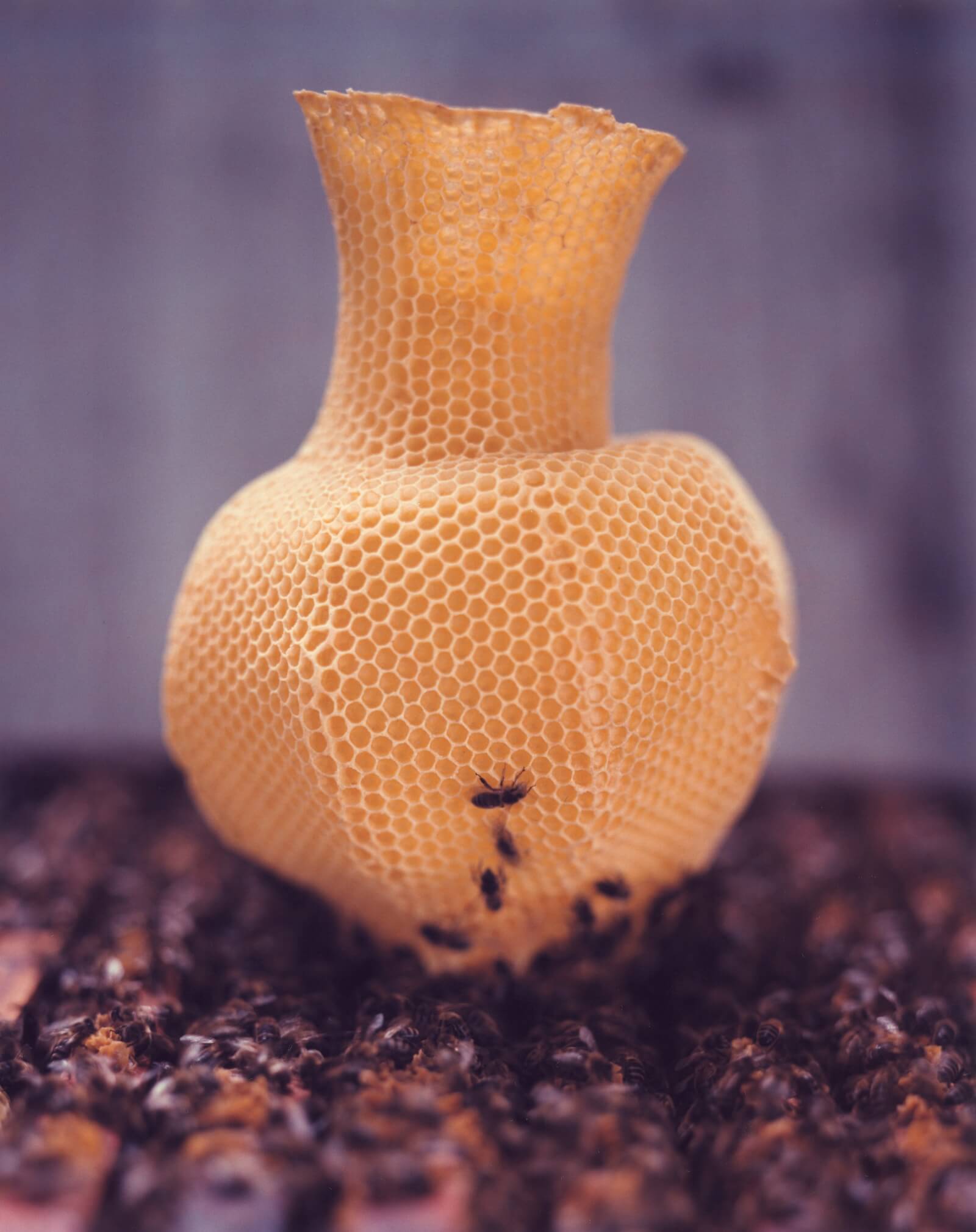 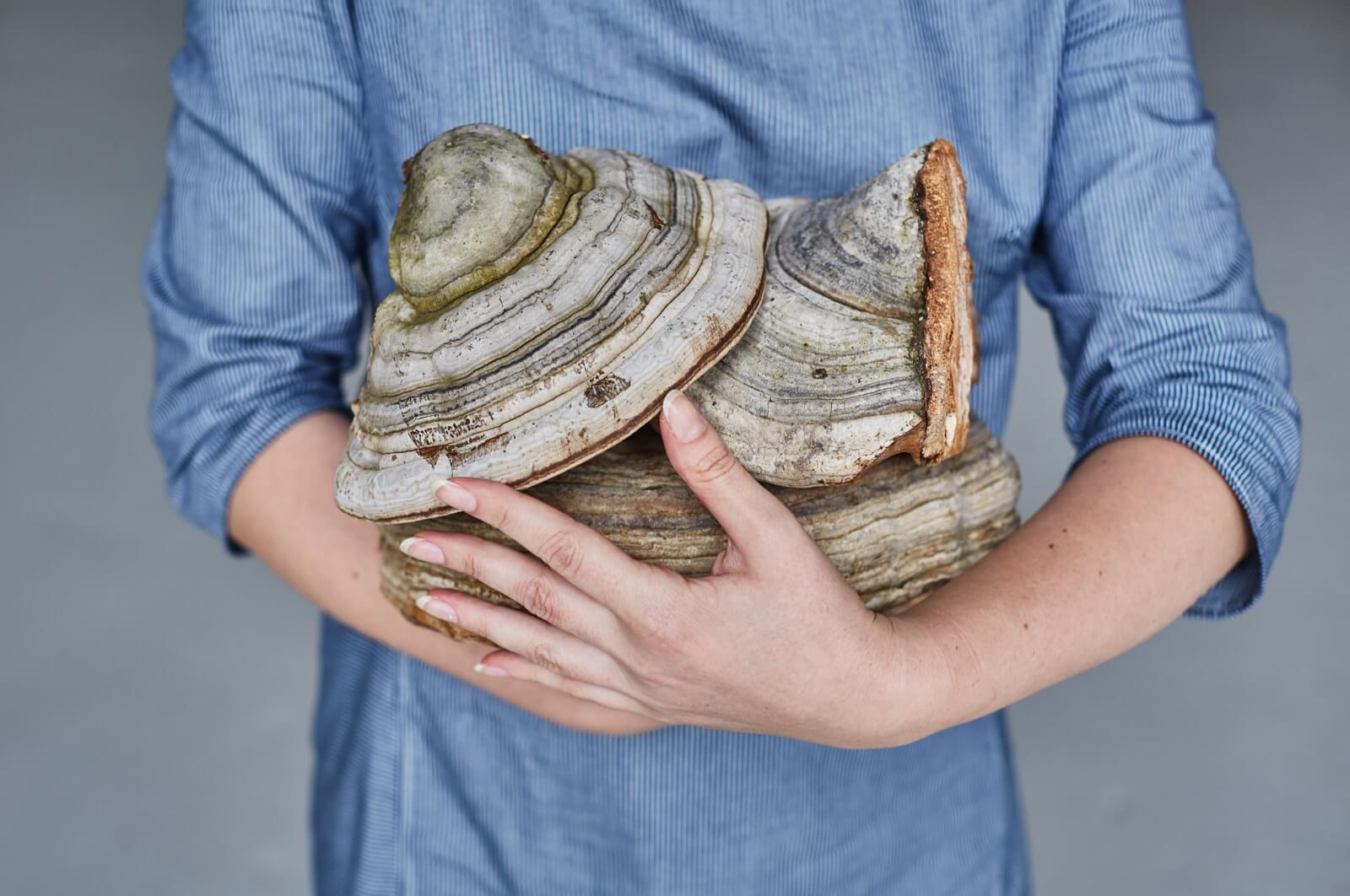 In late September last year, the London Design Festival was in full swing. Away from the beaten track in a bunch of shipping containers off a West London market, two of the brains behind Designersblock, Rory Dodd and Bud Moore, had just launched their latest idea. Typically put together at the last minute, ‘Biodesign Here Now’ was empty on my visit. The wind whistled around the containers as a few hardy souls poked their heads through various sliding doors to see what was going on. Yet oddly – and despite the absence of any punters – it felt like a significant moment. Areas of the festival have touched on biodesign in the past, but no one has ever attempted to mount a major show devoted to the emerging field. And both Dodd and Moore – along with their sometime business partner, Piers Roberts – have a track record of getting to ideas before other people. Designer’s Block, a founding partner of the London Design Festival, has been at the forefront of inventing ways to present cutting-edge design since 1998. 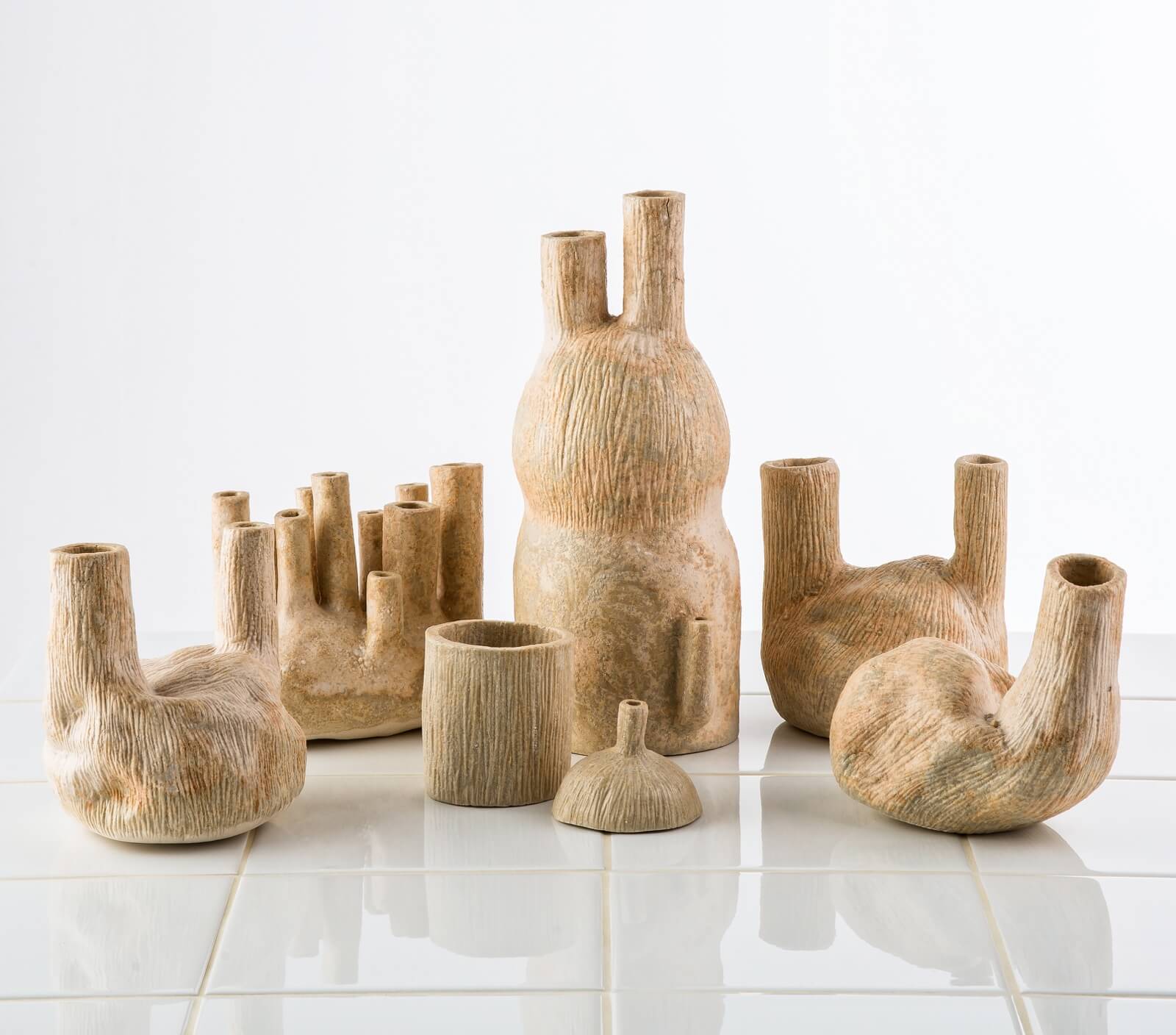 “It just seemed that the time was right,” Moore explained, “All the various elements in it had been on our radar for a few years. There is so much going on now and it seemed like it needed to be gathered together.” To do this the pair joined forces with Open Cell, an organisation that houses 45 shipping containers in Shepherd’s Bush with a combination of offices, workshops and biology labs. Exhibitors included Chip[s] Board, which makes particulate boards out of potato waste that can be used for interiors and furniture, and Sinae Kim, a recent graduate from Central Saint Martins who had created a collection of ceramics finished with a glaze made from urine.

ONE OF THE stars of the show was Alice Potts. The 25 year-old was spotted when she graduated from the Royal College of Art’s fashion department last year, and has since gone on to become something of a media star (with a profile piece on her even appearing on the MailOnline). Why? Because she has come up with a technique for growing clusters of big crystals on garments and shoes made from the user’s own sweat. The immediate interest after her graduation was unsurprising – the effect is quite startling and the thinking behind the finished pieces seemed to come from a quite different place than anyone else on her course.

It transpires she decided to study fashion almost on a whim. “When I went to the RCA I had no idea of what I was going to do, or what direction I was going in,” she said. As a result she found herself working on an array of projects. “I applied for everything. Even when we were at the bar if someone was talking about a project from a different course I sort of did it. I just wanted to learn so much and experience everything.” 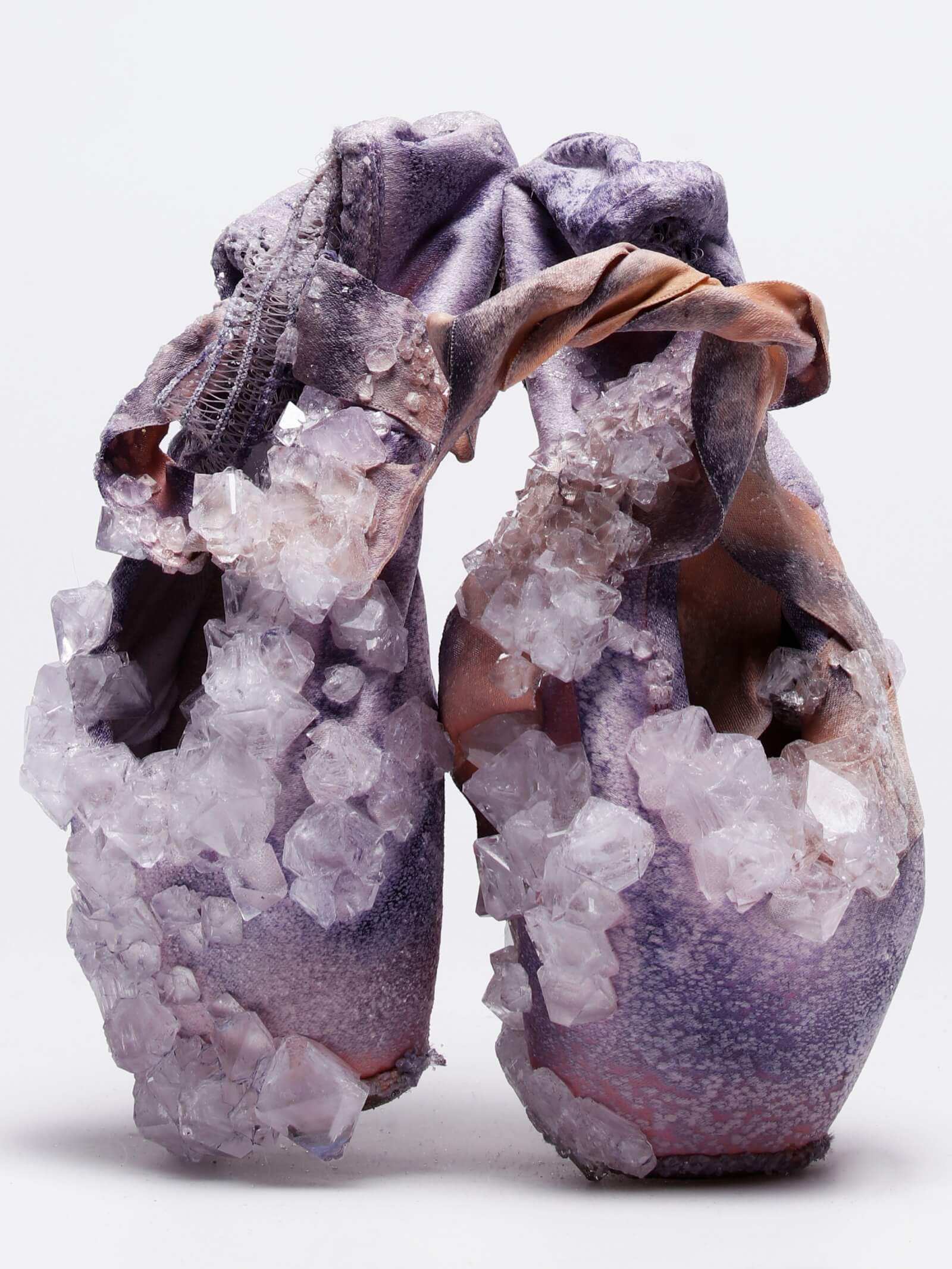 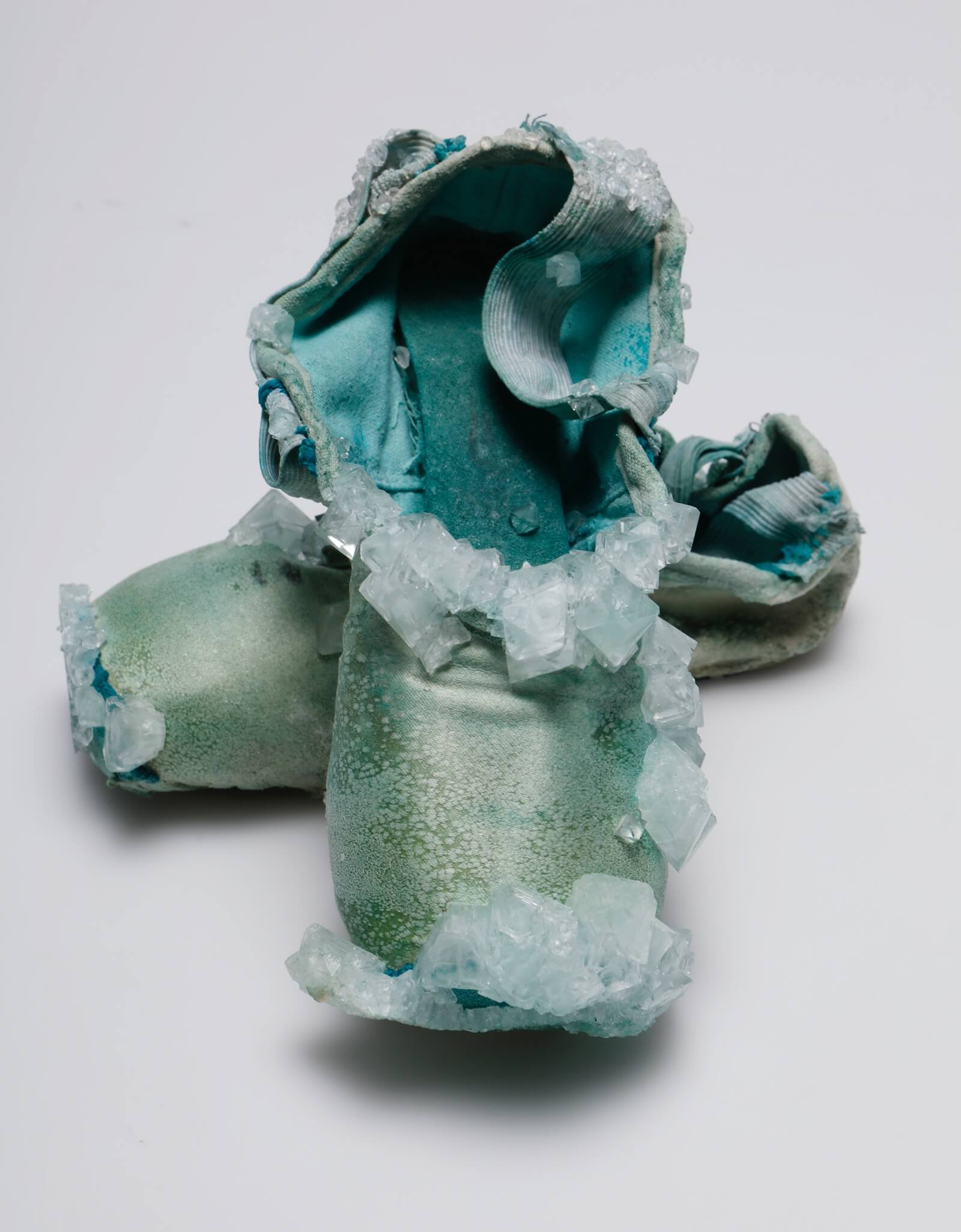 It was when she started working with bio-materials that things fell into place. As part of a team – and with help from bio-engineers at Imperial College London – she created a machine that could turn waste food into textiles. This led her to think about crystal growth, initially inspired by school experiments she did in her chemistry classes, using salt, hot water and food colouring. At this point in our conversation, she became a little bit secretive. The process of how she goes about growing the crystals is under patent. All she divulged was that she looked at other substances that contained salt, before alighting on human sweat. “Then I spent six months of multiple failures trying to make a process for it,” she told me.

As part of her experiments she spent a few days sweating into the same garment, as well as working with different groups of sports people. Those taking part were invited either to sweat into a particular item of clothing – natural materials work better than synthetic fibres seemingly – or have their sweat collected.

Interestingly she confessed that she was not entirely sure what was going on. “I’m not going to pretend I’m a scientist because I’m not,” she said, “I don’t 100 percent understand how it all works, or how it happens.” That being the case she decided to re-visit Imperial College’s bio-engineers once again, who worked with chromatography to break down the crystals’ make-up. “With some of them you could tell how much sugar was in the person’s diet. There was oestrogen in some of them, there was urea, lactic acid. All these things had formed the crystals. You can identify people’s health which is really, really fascinating.” 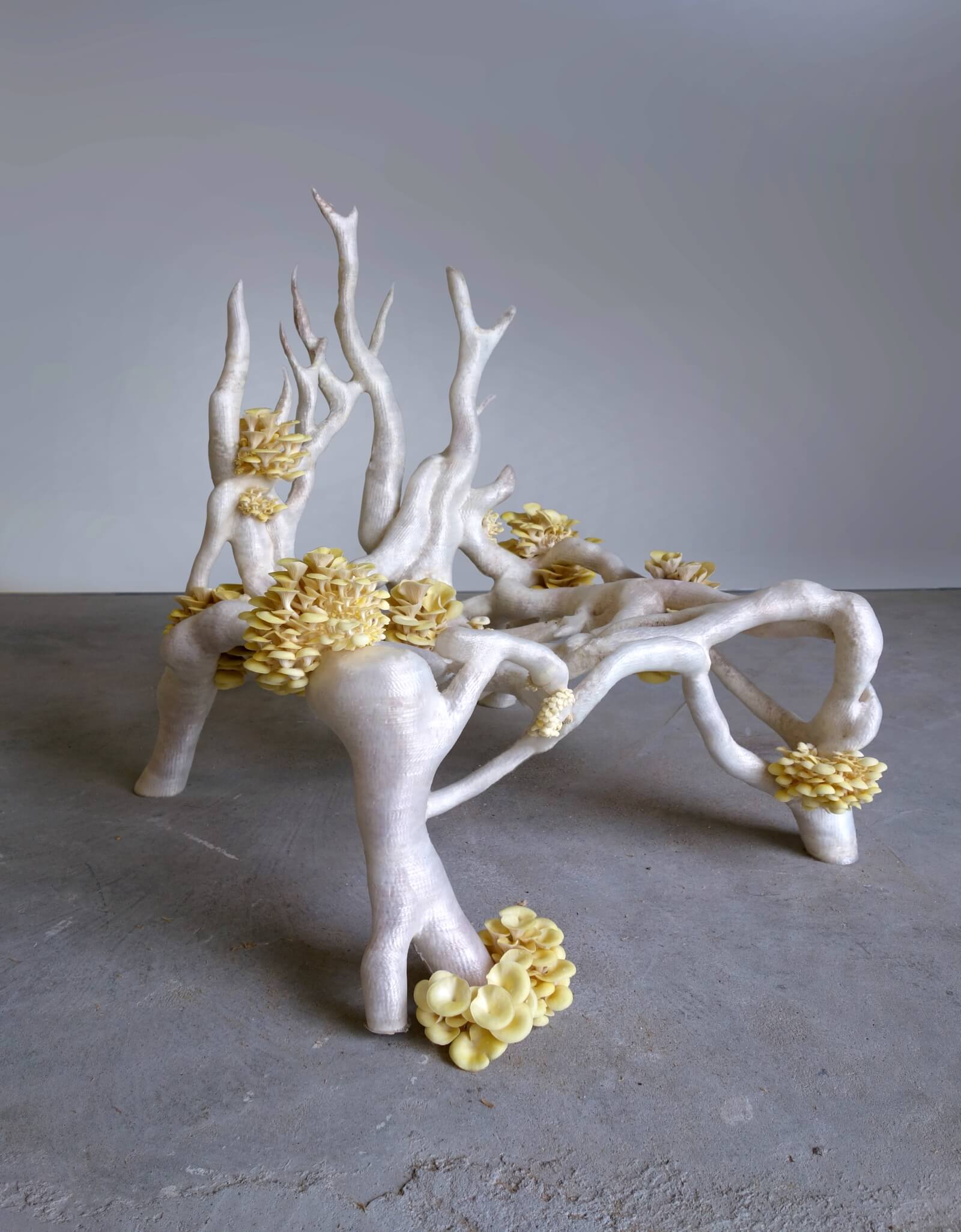 HUMAN SWEAT ISN’T the only unusual substance designers are beginning to harness. Many are finding uses for the fungus-based material, mycelium. Myco Tree, for instance, designed by Sustainable Construction and Block Research Group, are load-bearing blocks with which it will be possible to build. Another example is Dutch designer Eric Klarenbeek (working in collaboration with scientists at the University of Wageningen), who 3D printed a chair using living fungus and local waste material. The substance then grew on the inside of the chair’s frame to give it strength – mushrooms on the surface provided a final decorative touch. Subsequently Klarenbeek dried it out and added a thin layer of printed bioplastic to prevent it from growing further. Since the launch of the chair, the designer has gone on to found a new company with collaborator Jan Berbee, Krown-design, making a slew of products from the material. 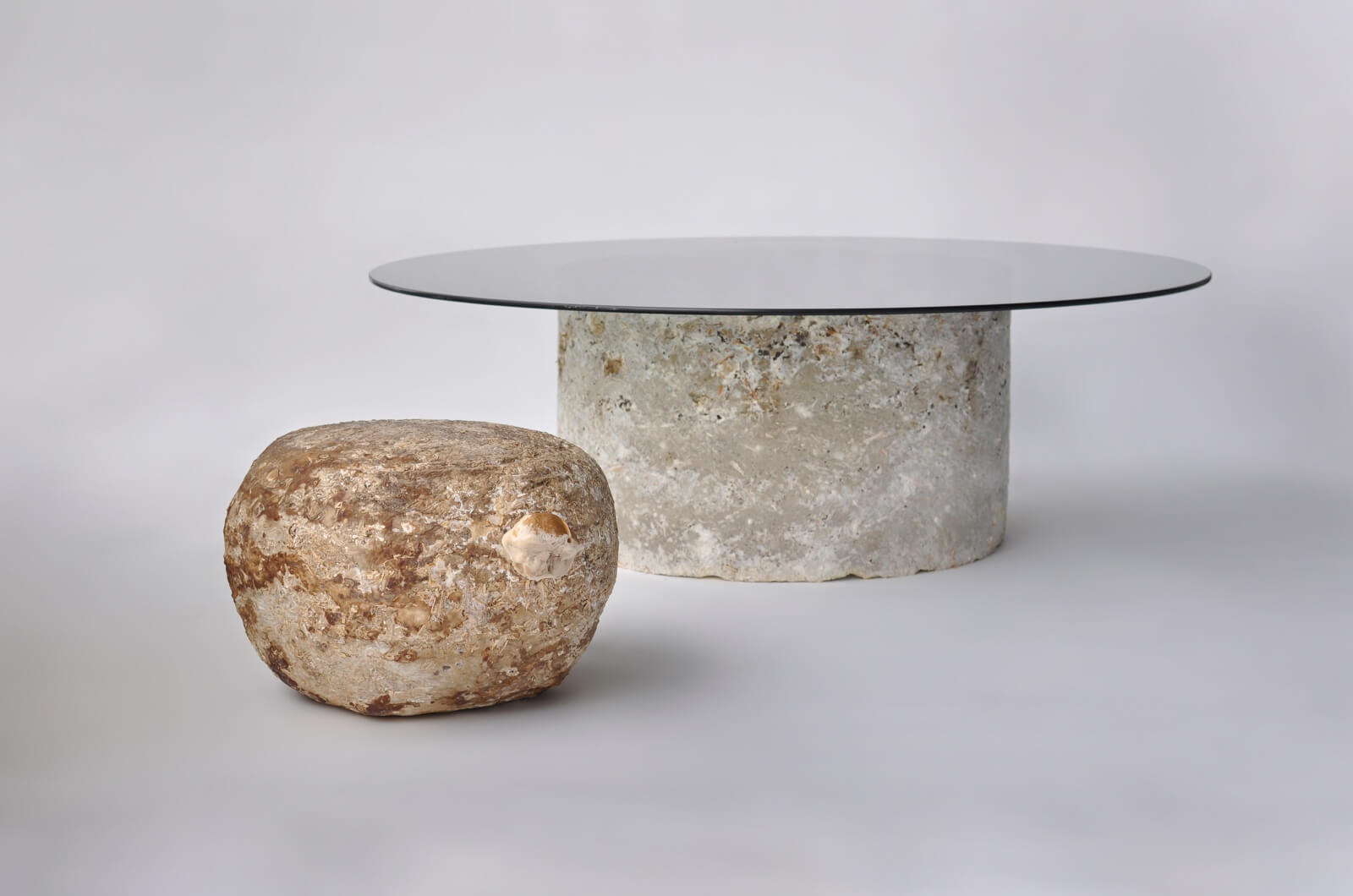 Sebastian Cox, a designer-maker best known for his beautifully crafted timber furniture, has also been experimenting with uses for the material. In 2017 he launched a new collection of pieces – including a lamp shade and stool – created with the help of design strategist Nilena Ivanova. “I was coppicing some hazel and I noticed when I cut some rods down which had grown quite near each other that they’d been bound together by something,” he explained. “And that something turned out to be fungus. I didn’t know at the time so I cut the bit off and sent it to the British Mycological Society.” The discovery allowed him to return to thoughts he’d had as a student around re-inventing MDF. “I spent a bit of time during my MA with natural glues and stuff,” he continued, “So when I found mycelium I thought that maybe that’s the substrate or substance to bind the chipped wood together. People talk about the mycelium but, for me, it’s actually about the wood.” 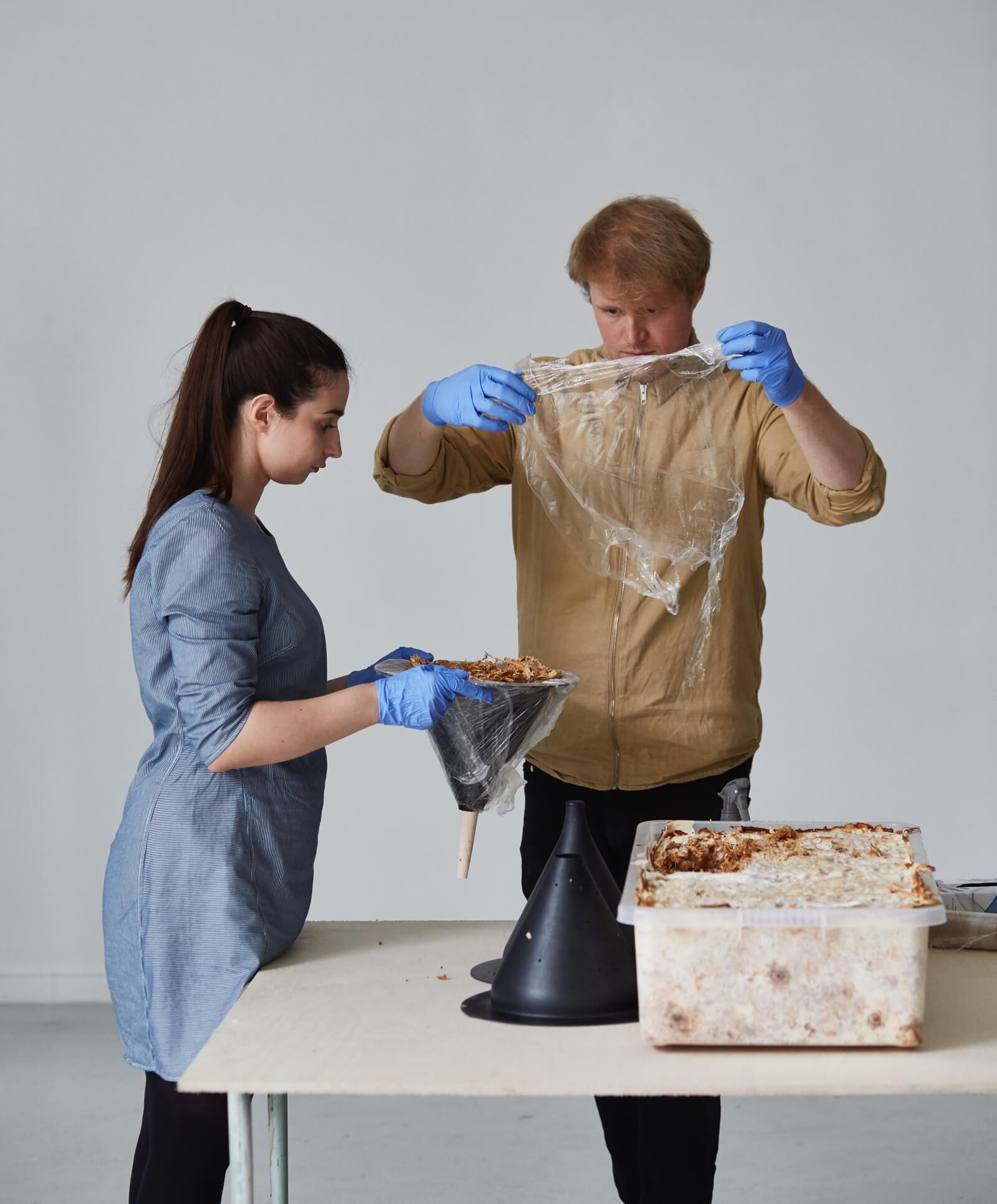 His pieces are made in two stages. Initially sterilised goat willow and birch is chipped up and put into substrate boxes, then the mycelium, which is carried on a millet-like grain, is introduced. The mixture is left for two weeks to allow the mycelium to grow throughout the wood. Subsequently it’s packed into a mould. After a fortnight it expands into the available space and an object is formed. The finished pieces have an odd, unsettling quality, which is both fascinating and repulsive in roughly equal measure. “Mushrooms are vaguely alien things,” said Cox, “They’re sort of the unknown – some of them can kill you, some of them are tasty. We have a weird relationship with them. We also don’t fully understand their potential.” Cox himself is veering away from creating pieces for the art and design worlds but is instead investigating the process’s potential for packaging. “It would be almost a direct replacement for anything that is made of polystyrene,” he added, “The interesting thing about the material is that it’s not just biodegradable, it’s also compostable.” Which means after use it could vanish without a trace. 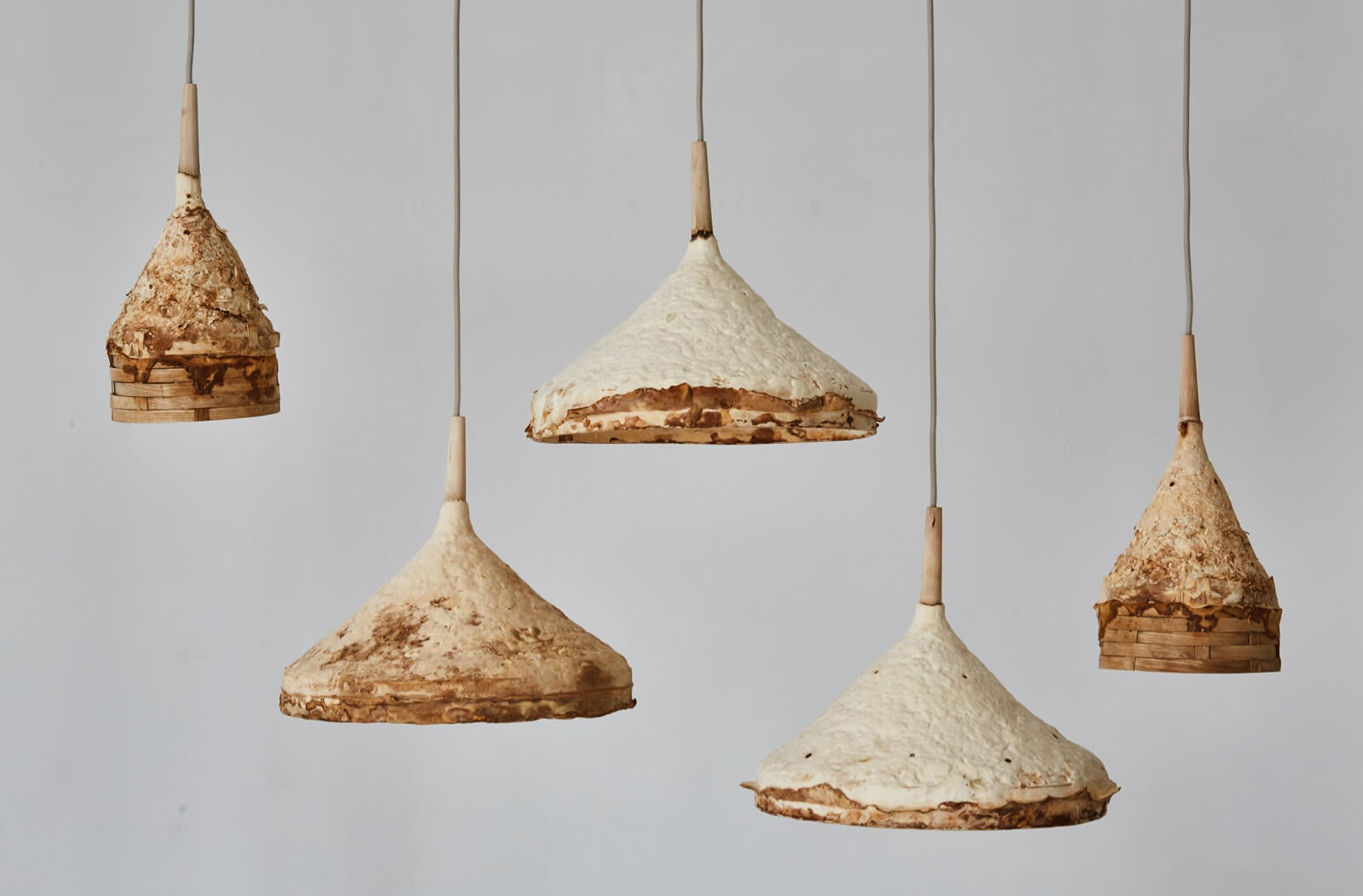 WHILE COX HAS been looking at a more environmentally-friendly way of packing things that avoids petrochemicals, James Shaw has been investigating a possible alternative for another familiar material. The Future of Plywood started from a project about the workplace devised by designer Ineke Hans and furniture company Opendesk, but ended up taking a different path. “I supposed it began with two simple observations,” Shaw explained, “One of which was that trees are not shaped like 8 x 4 inch panels and we have to go to quite complicated lengths to make them that size. And given that plywood, medium-density fibreboard, chipboard and sterling board are some of the main things we make the built environment out of, if you could transport seeds rather than trees it would be more efficient to ship around.”

The idea is that consumers can grow the plywood alternative onsite, or very close to where it’s needed, in a short space of time. “So that’s why I got interested in bacteria,” he continued, “as they multiply extremely quickly.” Essentially the bacteria grows on a nutrient soup made up of waste material, and as a byproduct creates cellulose sheets. “These sheets will spread out to the limits of whatever containers you’ve got it in – so if you put it in a nice rectangular container they make nice rectangular sheets,” he said. Once formed the sheets can be laminated together to create a strong stiff board. 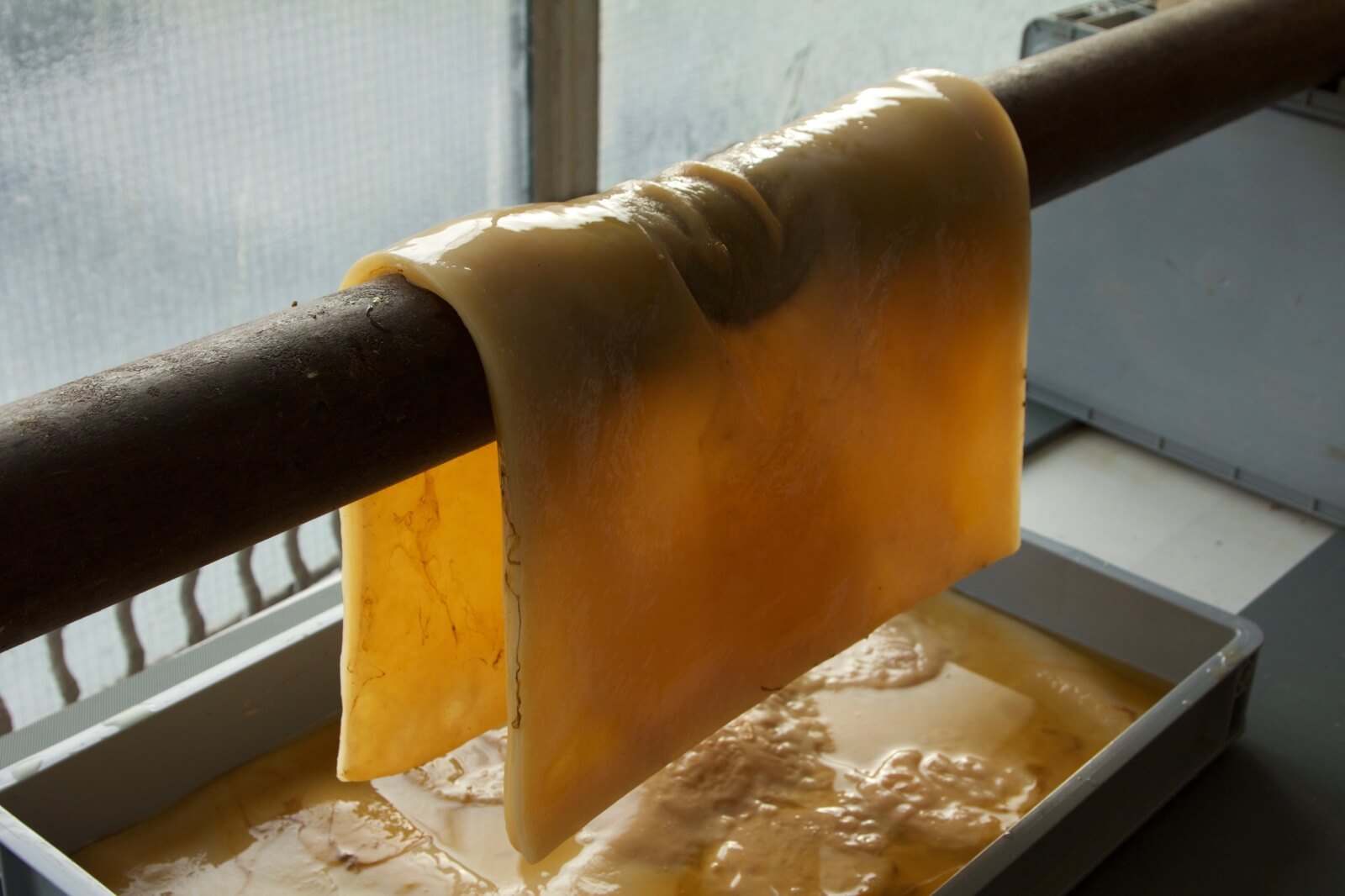 Currently the project is in limbo requiring in Shaw’s words “an injection of funding and a long research period”, but he believes that it could become a commercial reality within five years.

At a time when the wider population is beginning to understand the damage being wrought to the planet through our over-reliance on plastics and fossil fuels, what these designers are often doing is communicating new ideas for a more sustainable future. As James Shaw said, “We’re all suddenly much more aware of this invisible world that surrounds us in terms of the possibilities.” And the most exciting thing is you sense that the surface has only been scratched.