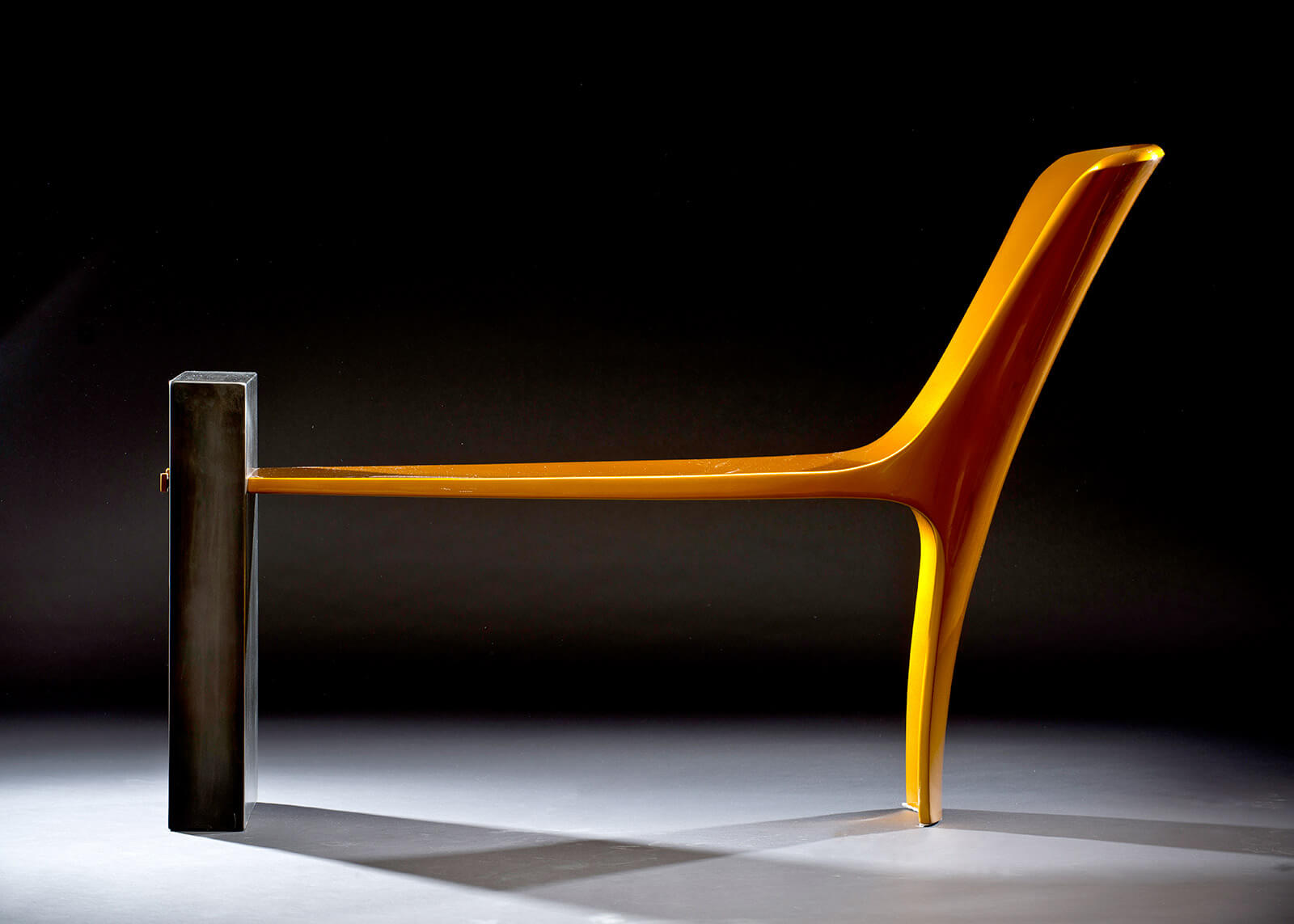 PART DESIGNER, PART artist, part craftsman, Vivian Beer describes herself as a “hybrid animal”. Although her initial connection to design was through metalsmithing, it was through developing her conceptual ideas of design as an art form that she made a name for herself. Her work has an inherent physicality, but it comes layered with subjective readings. “I see design in a wider sense, as a point of view,” she states. 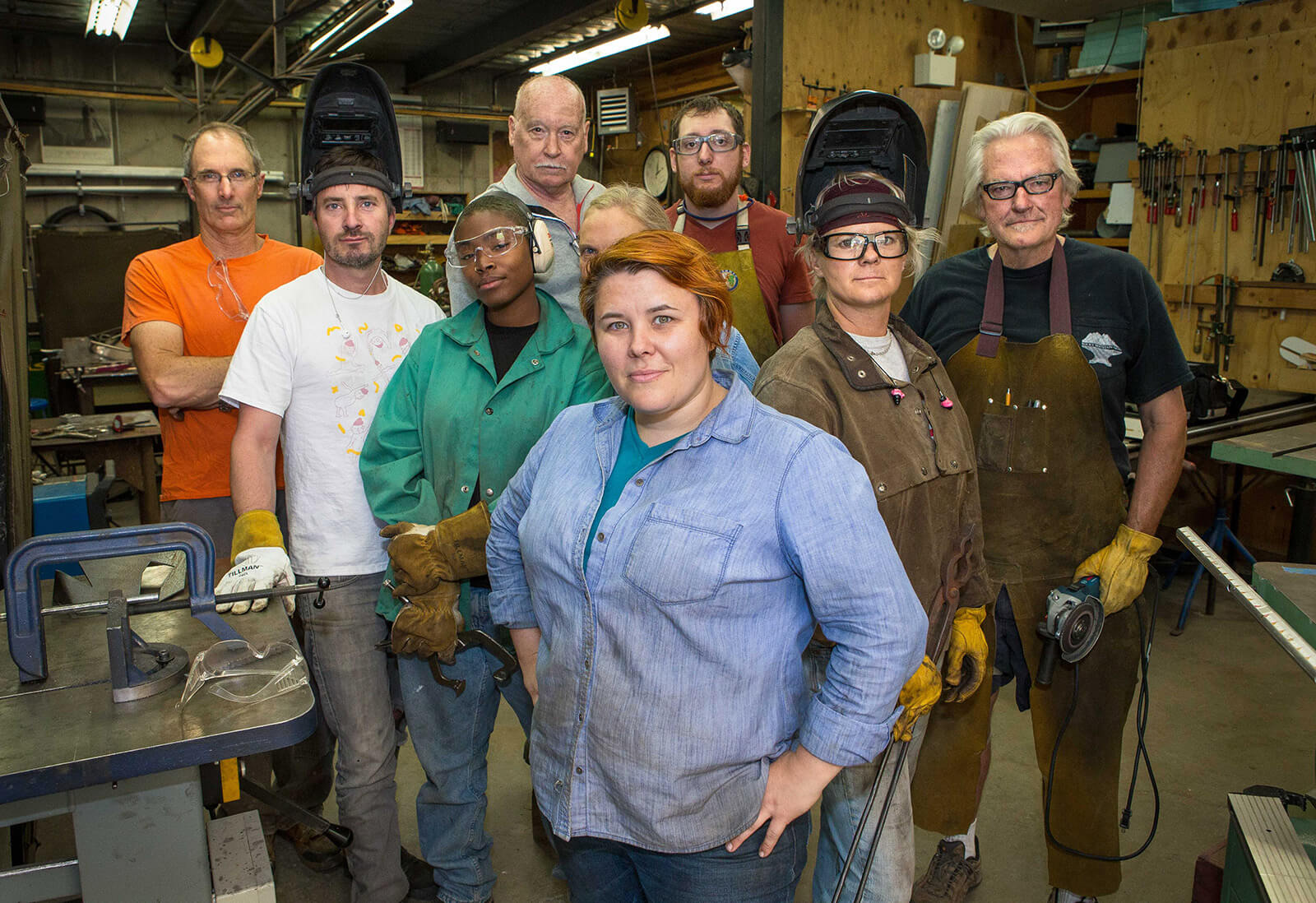 Growing up on the coast of Maine, Beer was exposed early on to the maritime craftsmanship of boat building – helping to restore boats as a child. Her undergraduate studies were in sculpture, followed by graduate studies in metalsmithing at famed Cranbrook Academy of Art. She knew by then that her entry point to creative expression was through manipulating materials, but she wasn’t sure what direction that would take. The answer came when a fellow student organising a chair show invited her to enter a piece. She understood then that the world of contemporary design was the arena she had been looking for to express her artistic sensibilities. 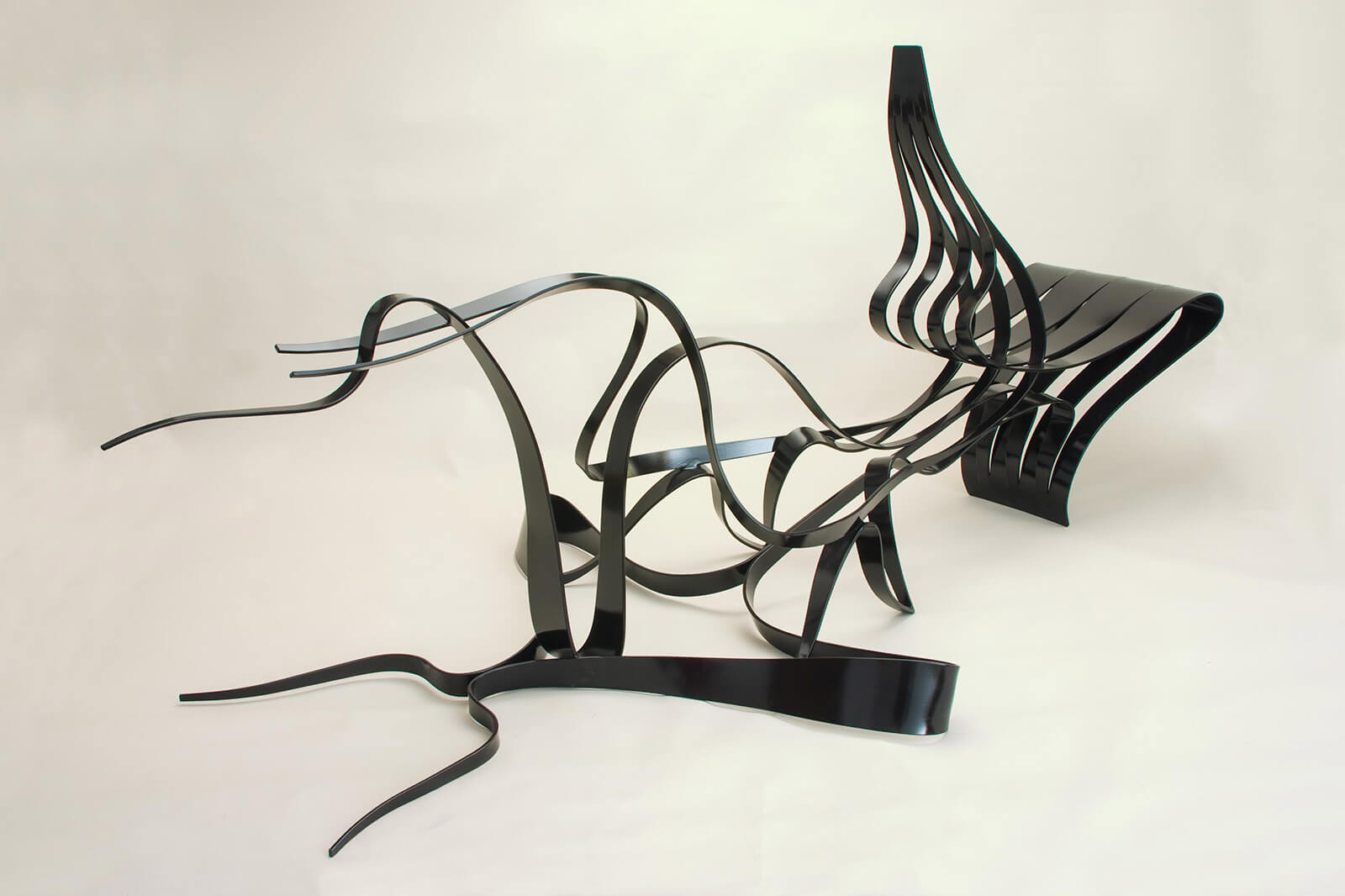 As she developed her work, usually with industrial materials, she began bringing to her creations not just her skilled technique but also her subjective way of looking at things. A good example of this is her ongoing series ‘Anchored Candy’, which started in 2008. Made with steel, aluminium and automotive finish, the series features sculptural, usually brightly coloured, shapes with an anthropomorphic energy, held in counterpoint (or anchored) by a dark-toned, solid-looking volume. She describes the series as “centring around subject matters of power and fantasy, making references to seductive consumerist imagery – such as fashion, muscle cars and cosmetics – that are ultimately tie-ins for issues of gender and desire.” She sees the pieces as individual characters, each with a life of their own, with their own complexities, but ultimately “just being themselves” and still retaining their functionality, albeit within new contexts. 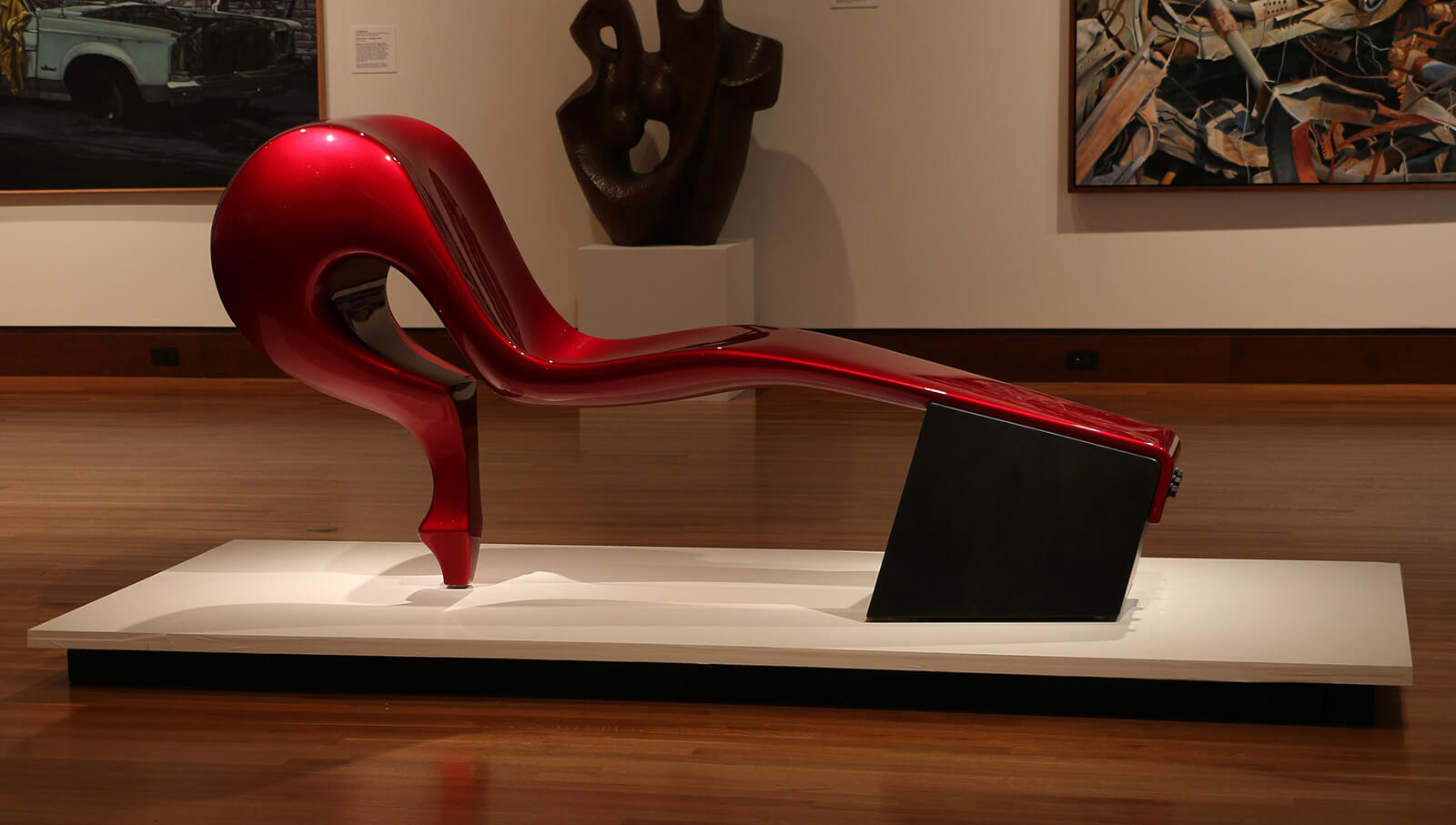 The dynamic ‘Anchored Candy’ pieces have a playful tone, but they also invite more serious, subliminal considerations of balance and control. The series was very well received, both by the public and critically, and is now part of the Museum of Fine Arts Boston Contemporary Art collection.

Commenting on her intentions as a designer, Beer mentions the desire to create a “psychological space”. “Many of the conversations about seating furniture end up being reduced to ‘Is it comfortable?’” she says, “But I wanted to take that to another level, to ‘How does it actually feel to sit there with this character I built for you?’ It is about having an empathetic experience with form.” 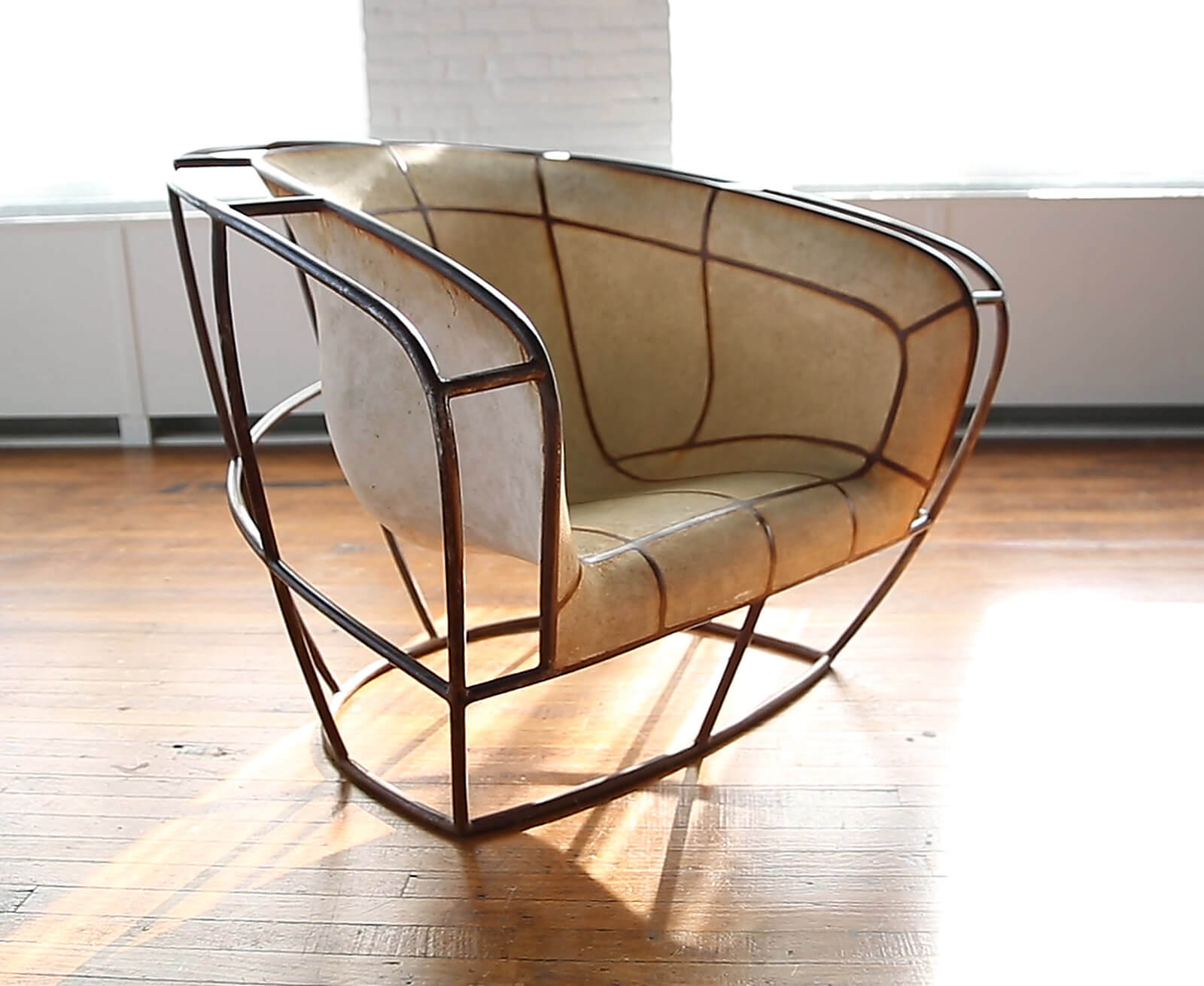 Throughout her career Beer has never shied away from expanding her practice in diverse ways, whether it be taking part in research residencies – from the Tacoma Glass Museum, to the National Air & Space Museum – or exploring the possibilities of public art commissions, further pushing the boundaries between design and art in her work. 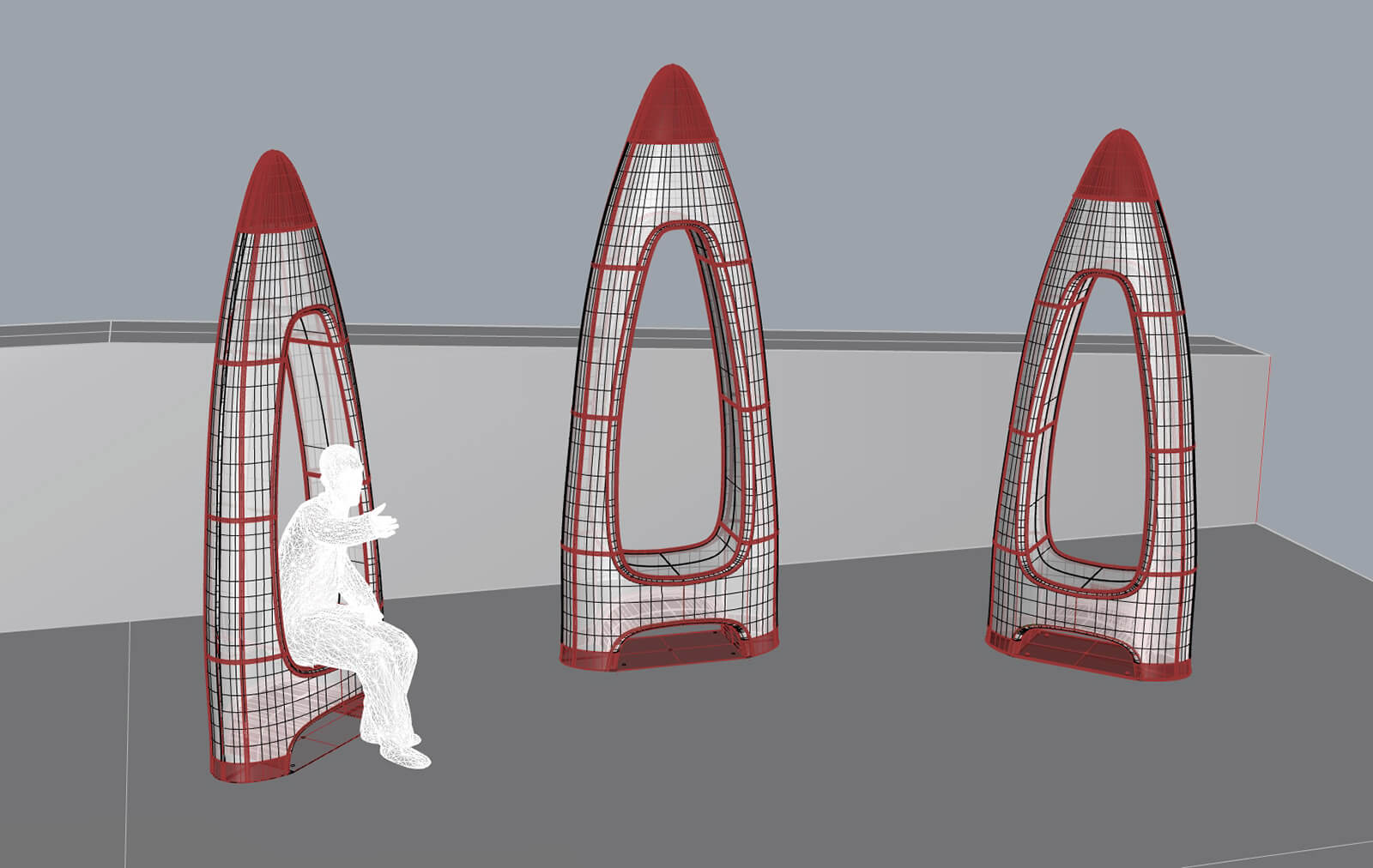 Working directly with cities, universities, museums, municipalities and real estate developers on these public art projects, Beer says she is learning and understanding a new scale for her creations. “I am discovering that it is less about dropping the object into the space, and more about its relativity. It’s about being sensitive to the existing community – finding a way to make a statement whilst still leaving room for life to grow and exist in that space.” 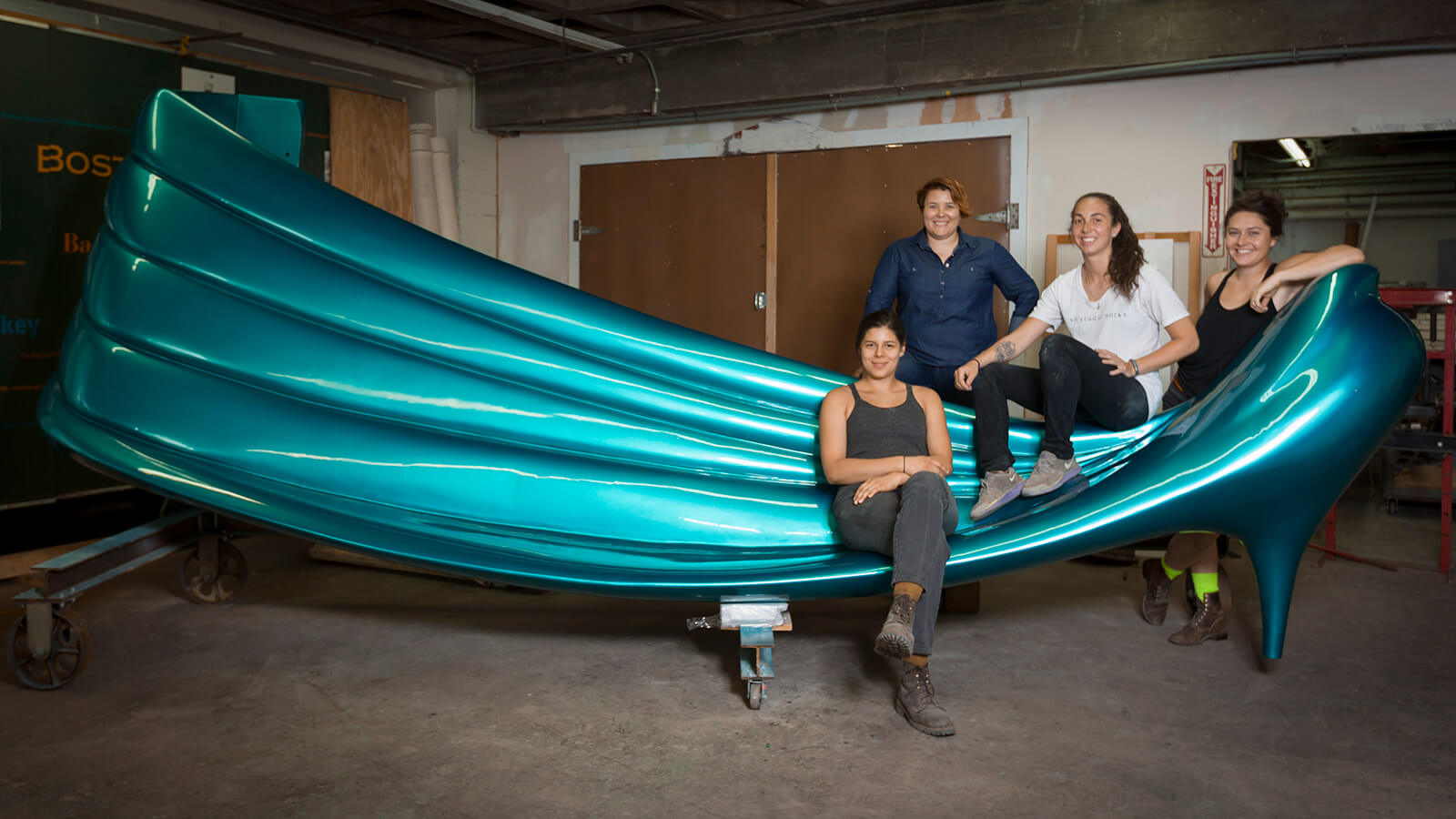 The designer with her team just before shipping the public art piece ‘Dressed Up and Pinned’, for installation, 2017. From left to right: Olivia Juarez, Vivian Beer, Amanda Kressler and Hannah Vaughan
COURTESY: Vivian Beer

A prolific maker, Beer has also been working on the opposite scale from public art, creating smaller objects for a more personal and functional use. She’s created lighting designs, like the blown lamp series, ‘Bloom’ (developed while doing her residencies at the Museum of Glass Tacoma and the Pilchuck Glass School). With this series she combines shades (made by glass blowing techniques), with steel geometric, voided bases, carefully positioning the projected light. Describing the pieces, Beer said she thinks of them as the “lovechild of factories and flowers”. 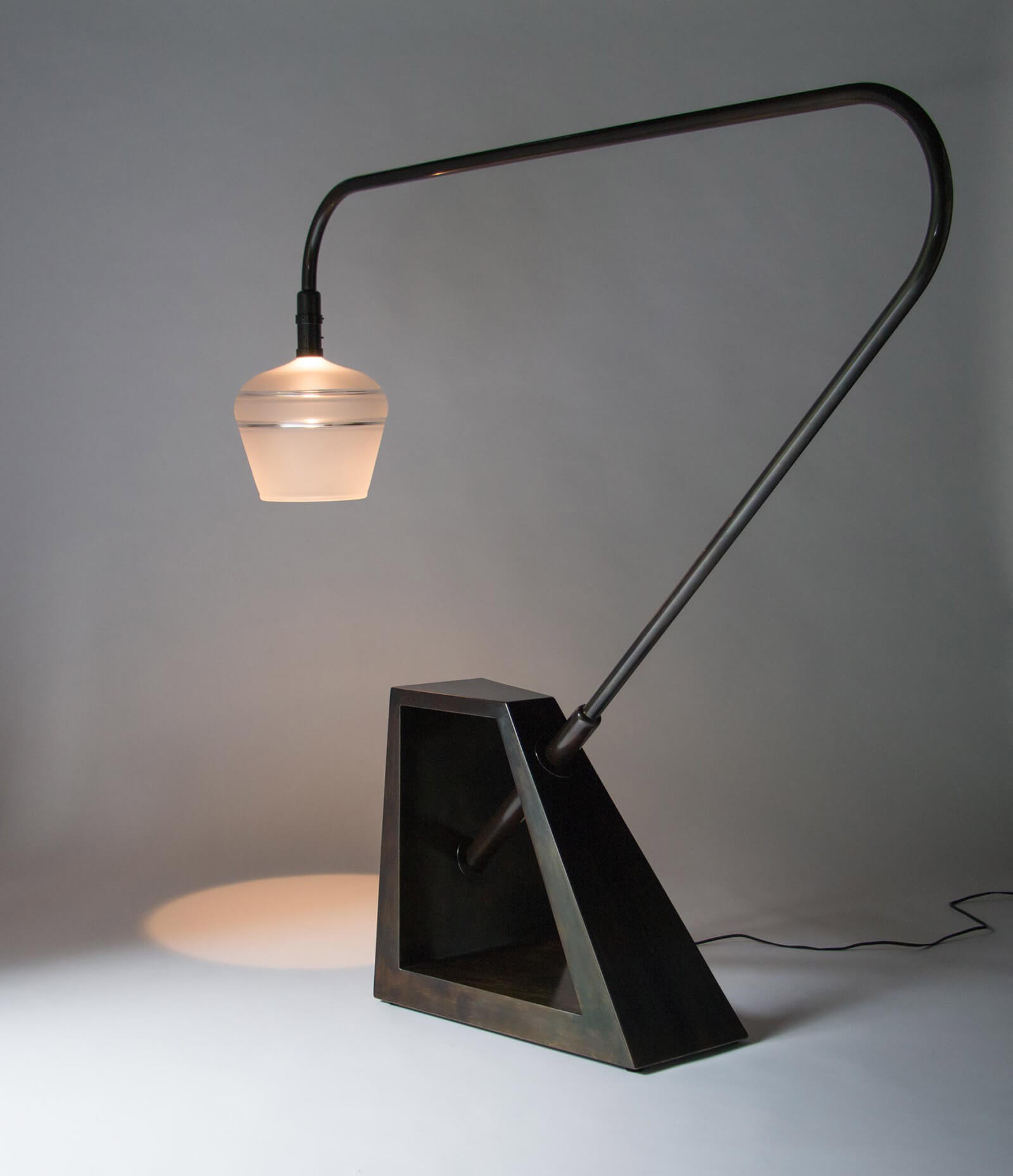 Another example are the curved metal bowls she has been creating. Minimalist in form and rendered in the same exquisite automotive finish she often uses, these read like excerpts of her larger creations.

Beer tackles her career with the same bold approach she brings to her creations – unafraid and welcoming the hurdles and risks inherent in the creative process. “You have to be doing projects that don’t make sense, that are completely irrational, otherwise you are not pushing boundaries,” she states. “I think there is a pressure to always hit a home run, and sometimes you need to fail. That can be very hard when you are trying to build your business, but failure can be an important part of the creative process as well.” 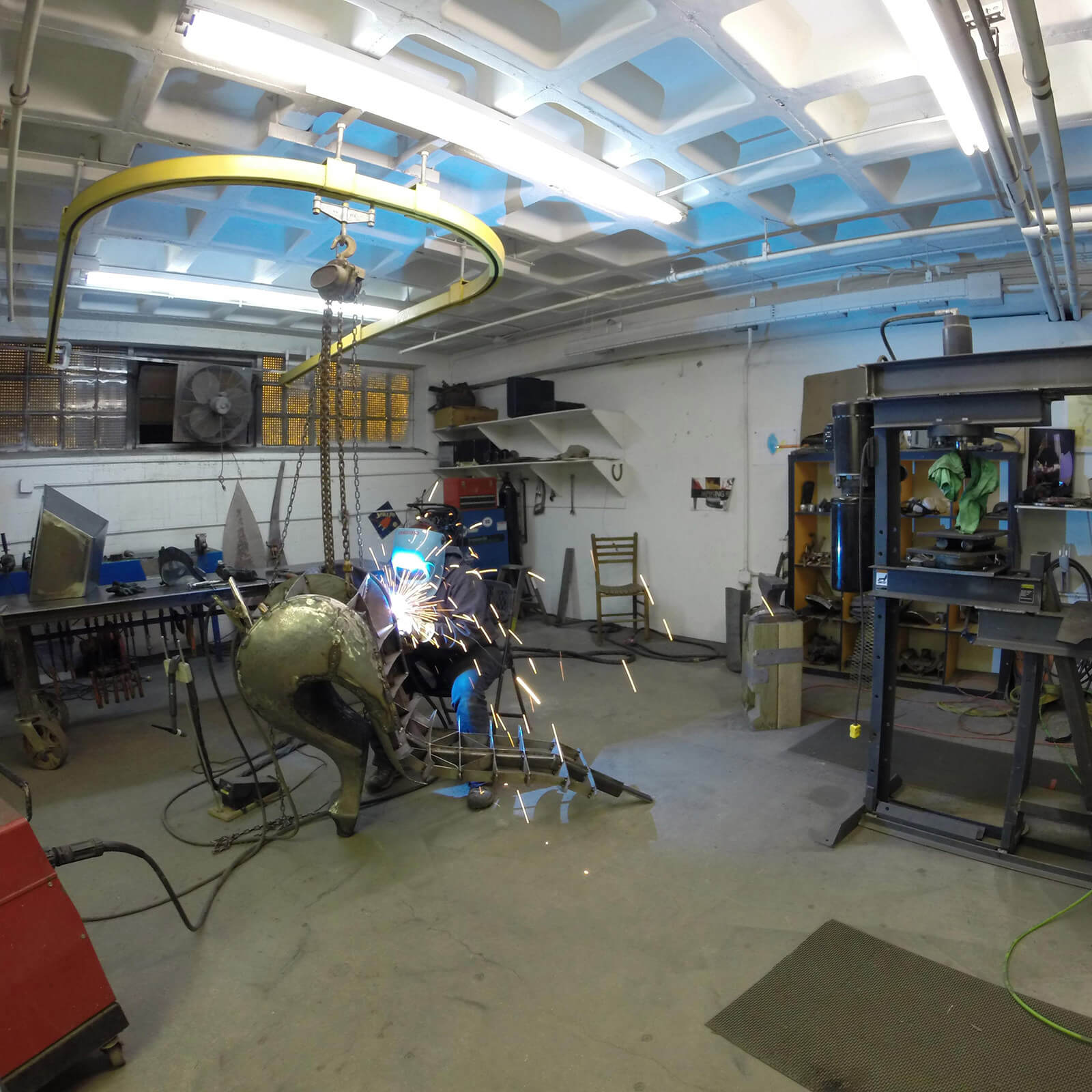 The designer at work on ‘Anchored Candy no. 8’, 2015
COURTESY: Vivian Beer

Reflecting on her position as a mid-career artist, in the midst of the current US climate of political and societal upheaval, she says, “I find myself checking with my ideologies big time. I find, in retrospect, that my work was really developed in opposition and struggle.” And getting a bit more personal, she continues, “I often joke that I chose metal because it pushes back so much, and I always liked to swim against the current. I’d go further to say I chose to work in male-dominated fields of metalworking, design and sculpture as a transgressive act against gender norms and expectations. The work, and I along with it, have been tied to the myth of rugged individualism because of this.” 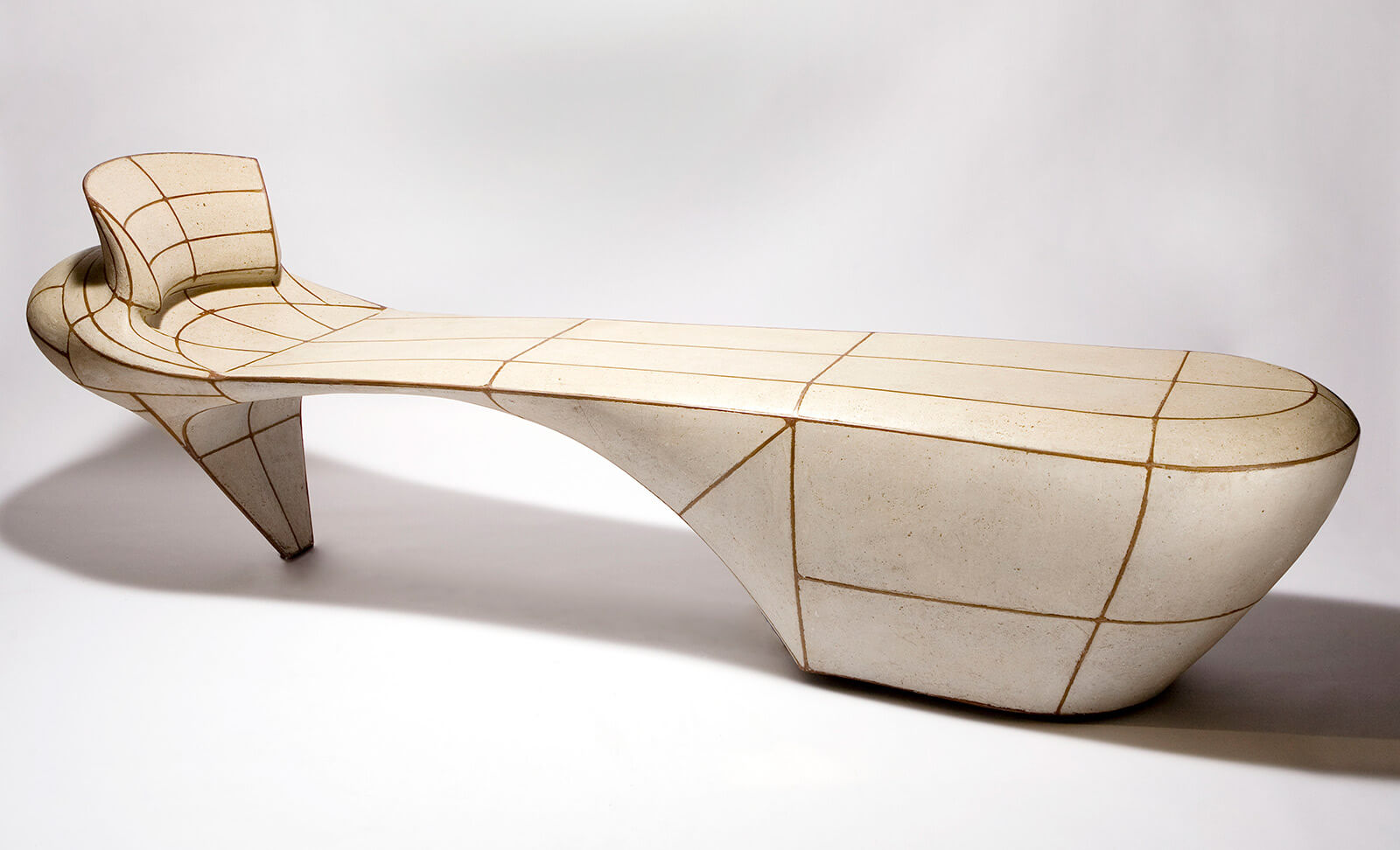 Vivian Beer – is a furniture designer/maker based in New England.