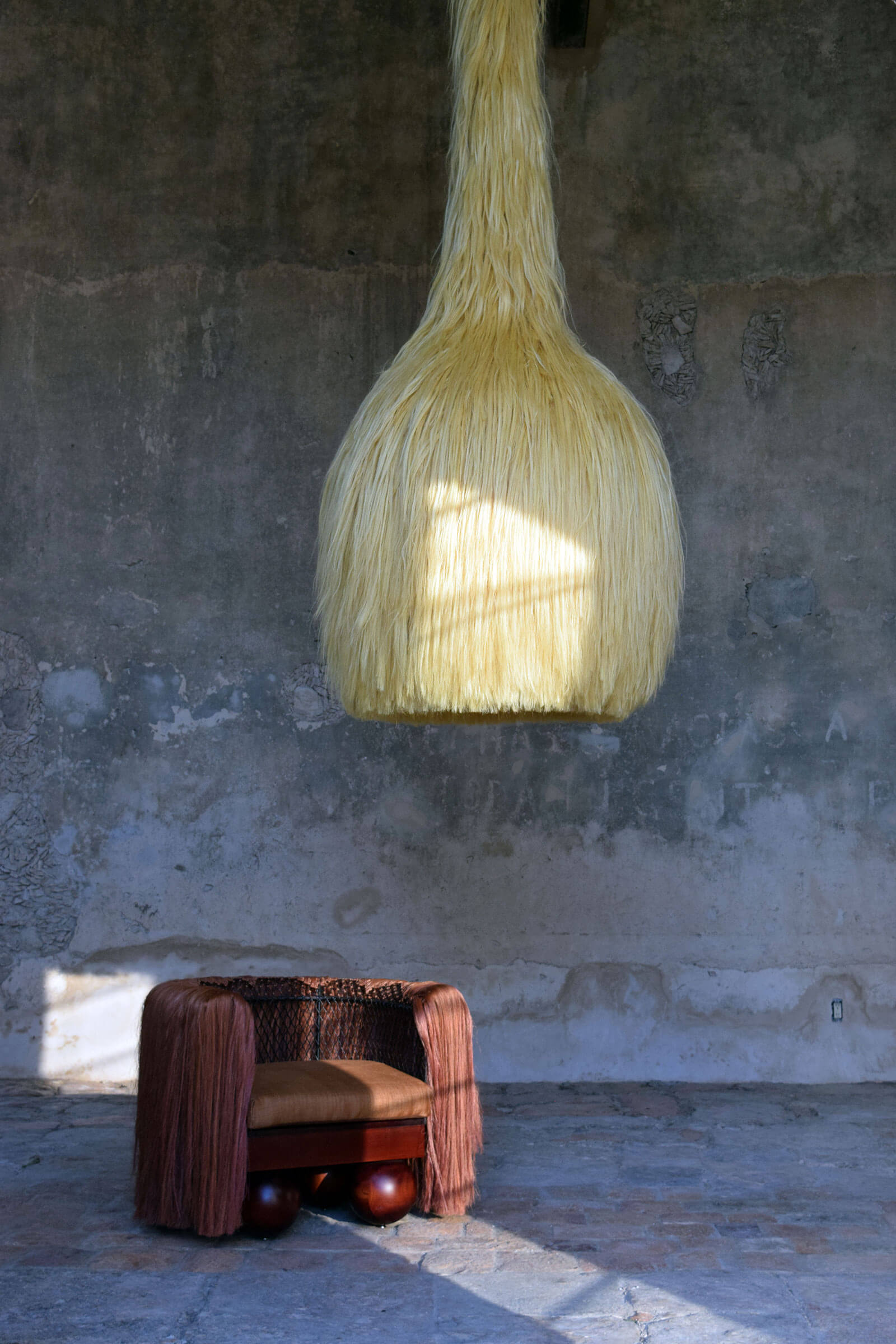 WHEN DESIGN WAS first integrated into the contemporary art fair ZONAMACO in Mexico City in 2011, only a handful of design galleries participated. A decade later, 25 galleries are exhibiting in the design section now called ZONAMACO Diseño at the Centro Citibanamex convention centre – and a new space for emerging design is being launched.

Art collectors and gallerists are among those actively following the Mexican design scene and acquiring pieces. “What has been very interesting for us is realising that we are hosting myriad buyers joining us from all over Mexico,” says Cecilia Léon de la Barra, an industrial designer and lecturer, who has curated ZONAMACO Diseño since 2014. “We’re very pleased to say that major art collectors, including international art gallerists, have also been buying from ZONAMACO Diseño.”

While the majority of the exhibitors are Mexican, several international players are also taking part, including Hechizoo from Bogota, Odabashian from Miami and Mobilier National, France’s national furniture collection. 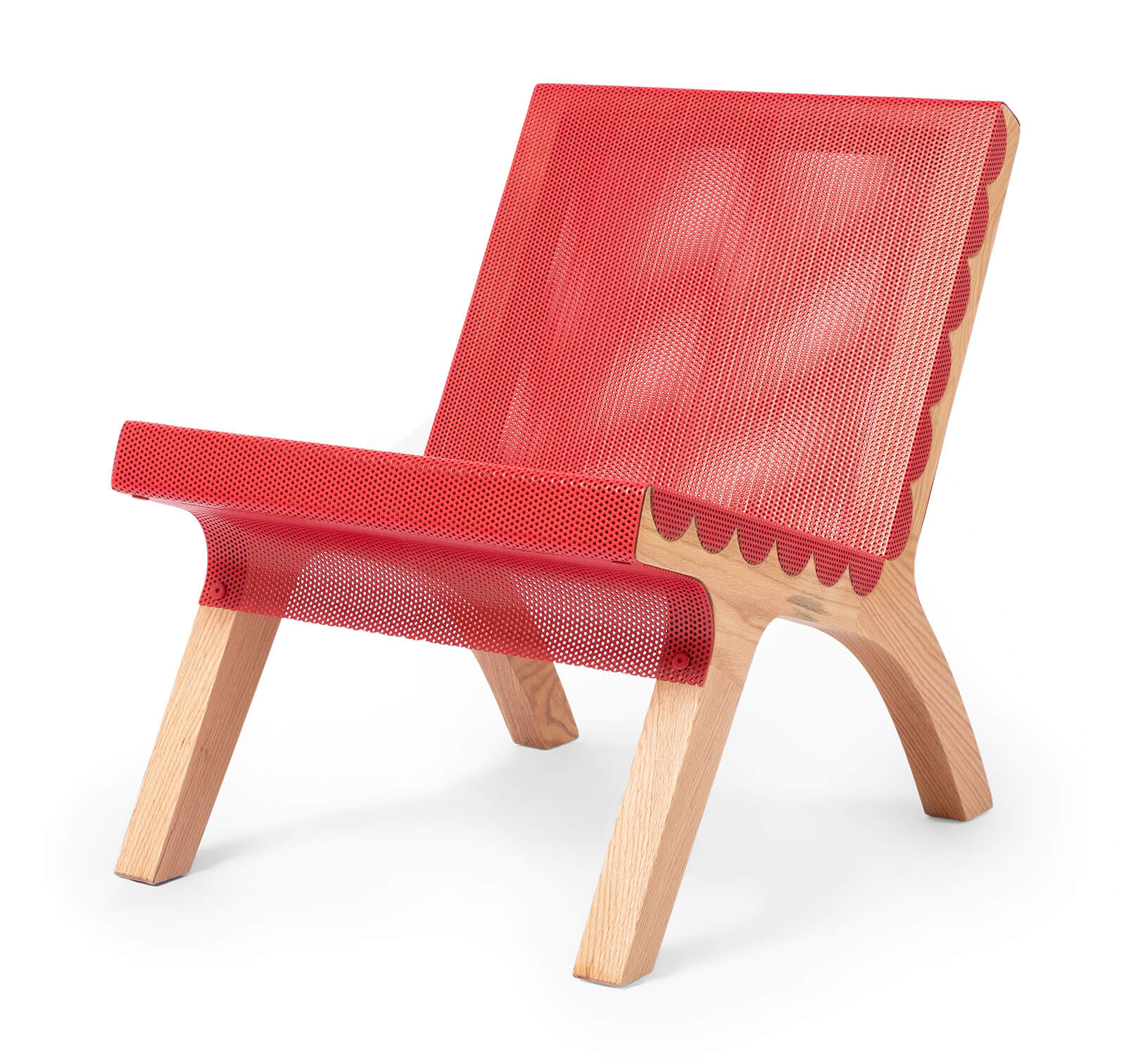 A talking point this year is the new open space called ‘Emergente’, which spotlights works by 22 designers under the age of 35, including recent graduates and students. “We were looking for good design, new proposals and objects with character,” Léon de la Barra says, who invited industrial designers Jorge Diego Etienne and Joel Escalona to curate this section with her.

Asked what characterises Mexican design, Escalona replies: “It’s difficult to pinpoint but on the one hand we have a privileged cultural background – full of history and knowledge – and on the other hand contemporary life and globalisation has given us access to the latest trends, techniques and information. So I would say Mexican design is a constant dialogue between the past and the future.”

‘Large Chandelier’ and ‘Espadín Chair’ by Angela Damman at ADN
Greeting visitors at ADN from Mexico City are an enormous chandelier made from luxuriant, swishing textiles, which brings to mind a gigantic blonde wig, and a chair draped with lush dark red fibres.

American-born Angela Damman made the pieces in collaboration with craftswomen in the pueblos of Yucatán. She began working with the local women – who dye, spin and weave fibres – in 2012, after a six-month-long trip grew into an entrepreneurial and artistic project. Aspiring to find novel ways of working with plant-based fibres, Damman cultivates materials at a hacienda where her studio is located and presents the ensuing works internationally. 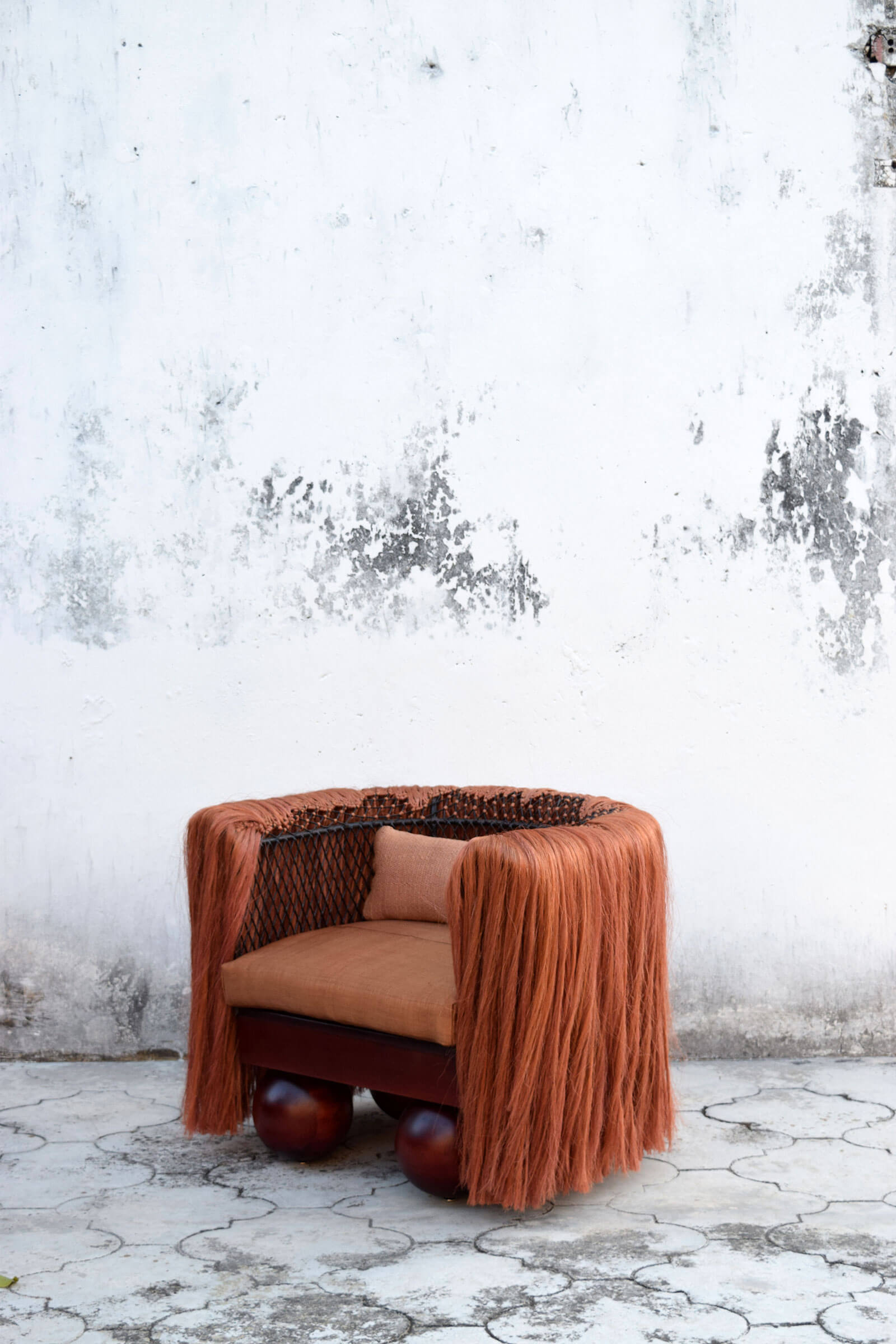 ‘BCLN’ side table by RFRNC
Among the eye-catching pieces in the ‘Emergente’ section is this minimalist side table by young Mexican designer Hugo Samael Covarrubias Gonzalez, who founded the studio RFRNC. A silver cross in the centre of the square marble surface, intersecting its swirling reddish-brown veins, makes it reminiscent of an altar table. 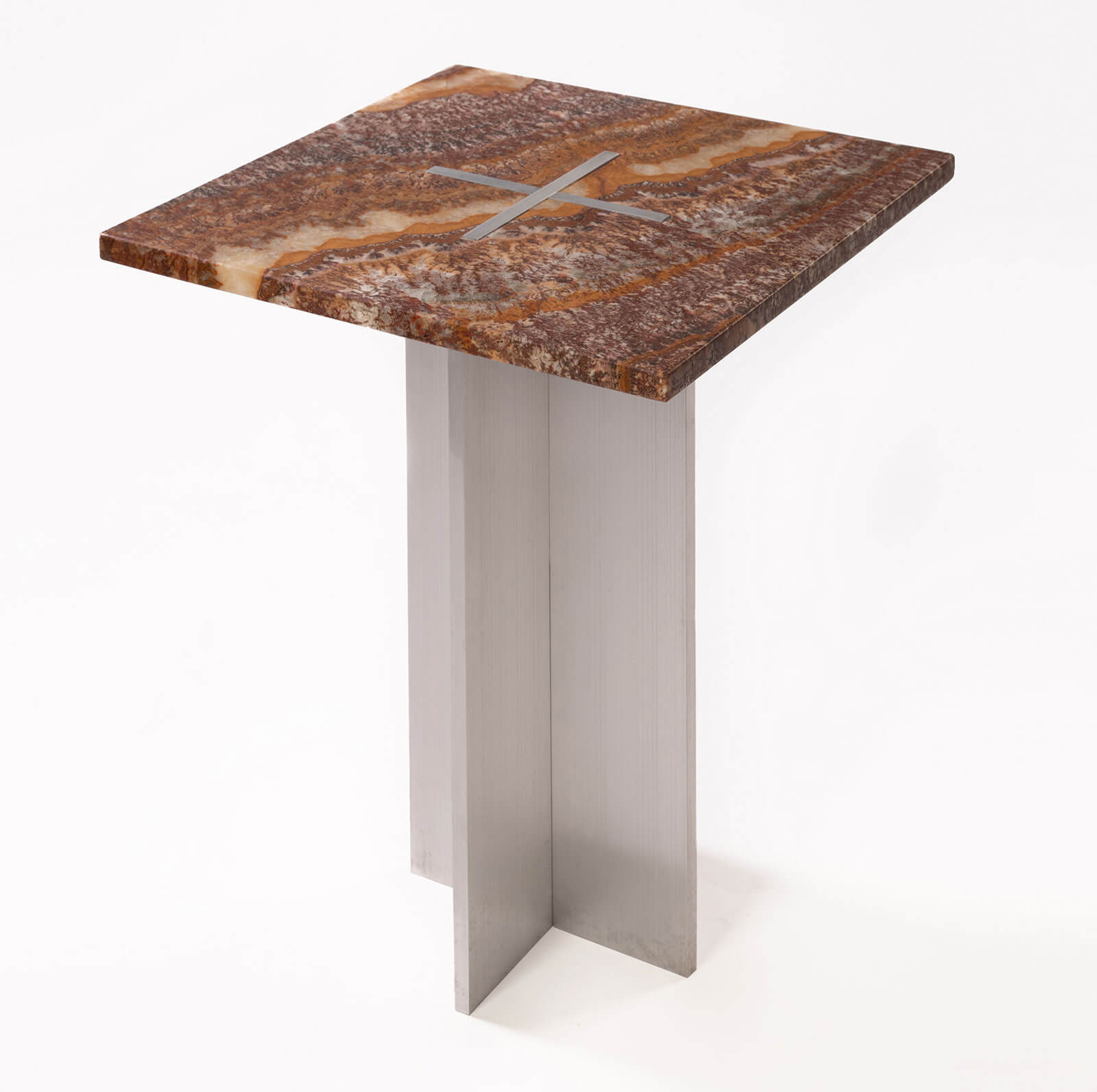 ‘Pisshand’ tapestry by Zhivago Duncan at Odabashian
Zhivago Duncan, a first-generation Syrian-American artist based in Mexico City, is known for his multi-media artworks reflecting upon civilisations and human consciousness. After exhibiting black raku ceramics at FIAC in Paris in October, he is showing with Odabashian, a rug maker founded in Mexico in 1921, which has a showroom in Miami. For this first collaboration, Duncan has created an apocalyptic and slightly psychedelic piece. It depicts a yellow-nosed, empty airplane soaring into the black hole, propelled by a human hand with an all-seeing eye, questioning the purpose of mankind’s inventions in the absence of humanity. 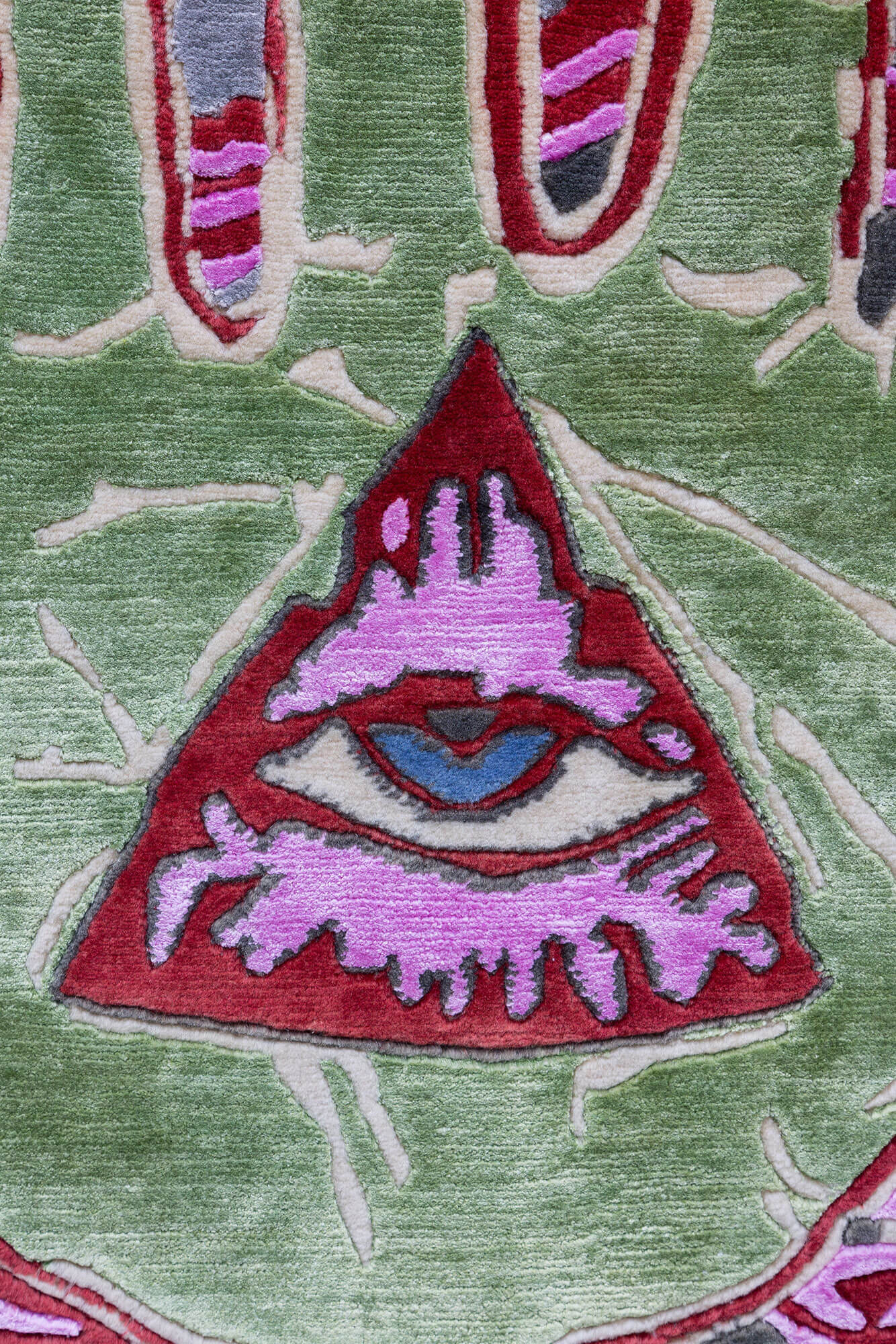 ‘Bastum’ bench by Edgar Orlaineta and Perla Castañón at CGN
Visual artist Edgar Orlaineta teamed up with industrial designer Perla Castañón to make this playful bench with a rhythmic row of wooden dowels spanning its entire length. Revisiting traditional carpentry with a contemporary twist, the bench can be produced with rods in either black or red stains. Represented by Casa Gutiérrez Nájera (CGN) from Querétaro, northwest of Mexico City, the duo have also created the ‘Falbalá’ chair that employs moulded steel sheets, in pink, purple or red, over a wooden framework. Beyond upcycling a humble construction material, what makes the chair nifty is the attention to detail in the scalloped edges of steel along the sides. 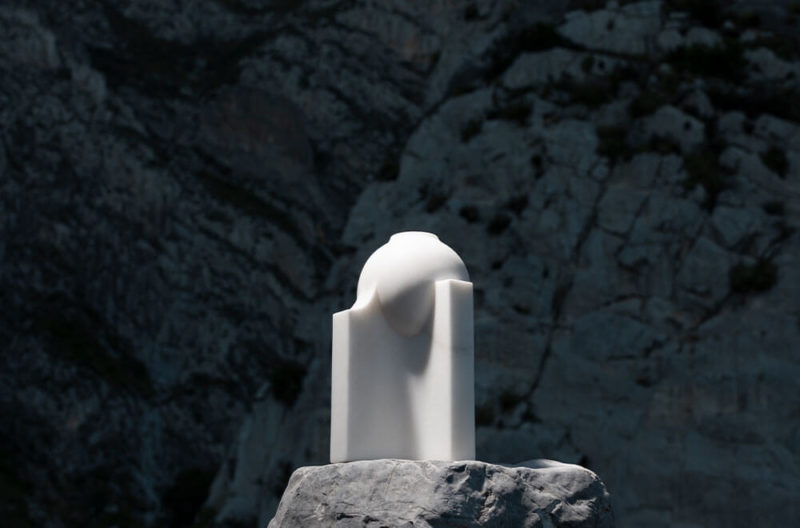 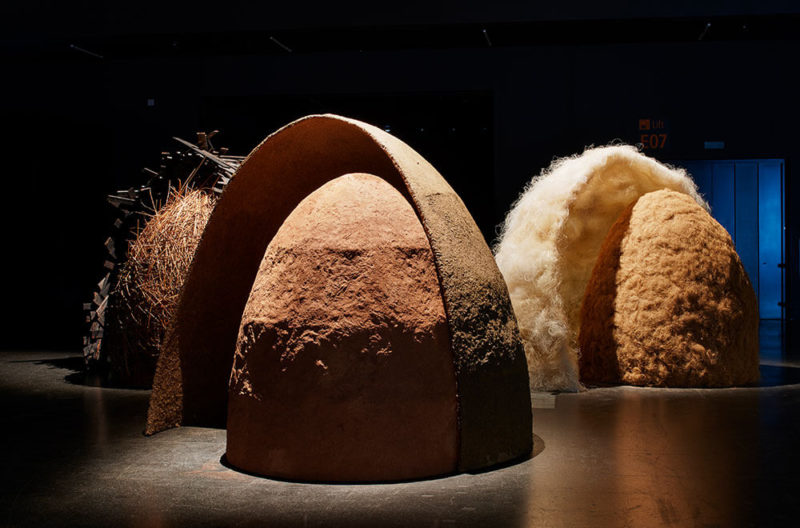 With the rich diversity of contemporary studios being recognised internationally, and earlier modernist pieces performing well at auction, Latin America is firmly on the global design map. 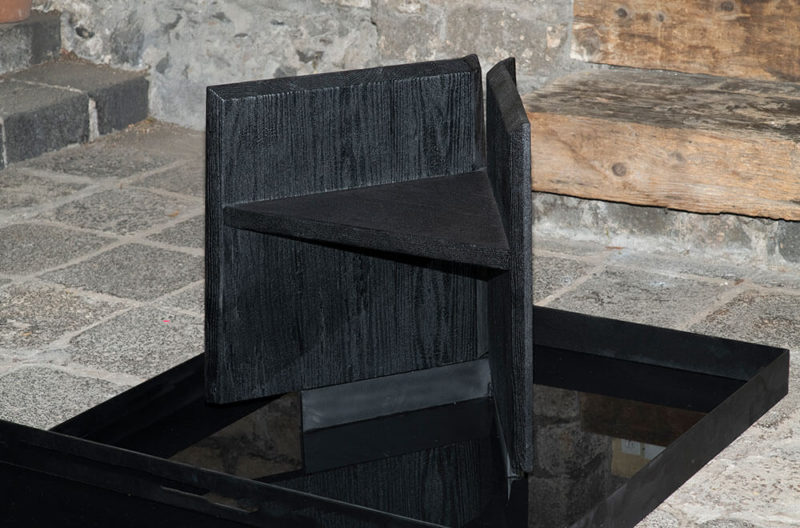 ZONAMACO / UNNO: Commissioned works by a select group of the region’s most promising designers. 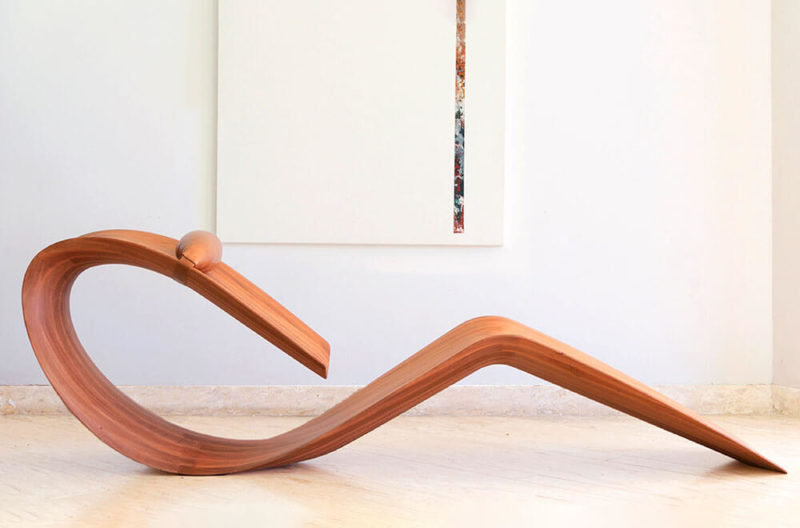