An exhibition highlighting the design conversation in plywood, from the early British modernists to a Chicago-based designer.

From Lawn Road to South Chicago: Progressive Plywood in Times of Change 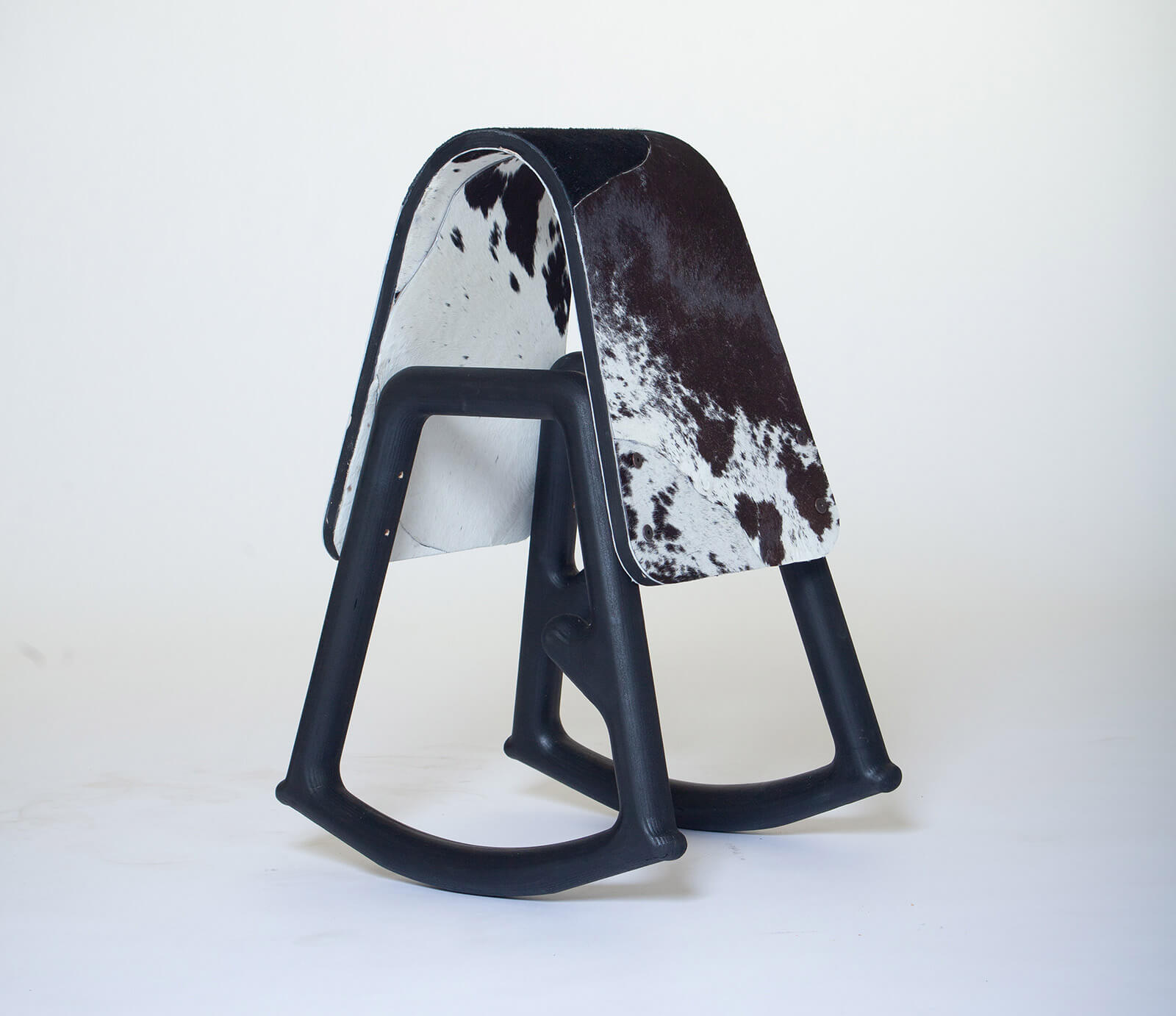 SOME MIGHT ASSUME that bent-plywood furniture is a closed chapter in the history of design. But a new exhibition, From Lawn Road to South Chicago: Progressive Plywood in Times of Change, at the R & Company in New York, suggests it is still flourishing. Made of glued, compacted wood veneers – each layer placed so that the grain is at a 90° angle to the one below – plywood was pioneered in furniture in the 1920s by Finnish architect Alvar Aalto. In 1932, he produced the iconic ‘Paimio Chair’ for the Paimio Sanatorium for tuberculosis patients. He deemed the appealingly lightweight, but strong – material more human than the tubular-steel furniture produced that decade by the early modernists. While curvilinear, organic and honey-toned, bent plywood was coveted by modernist designers for being an industrial, low-cost material used to make stripped-down, functionalist furniture. 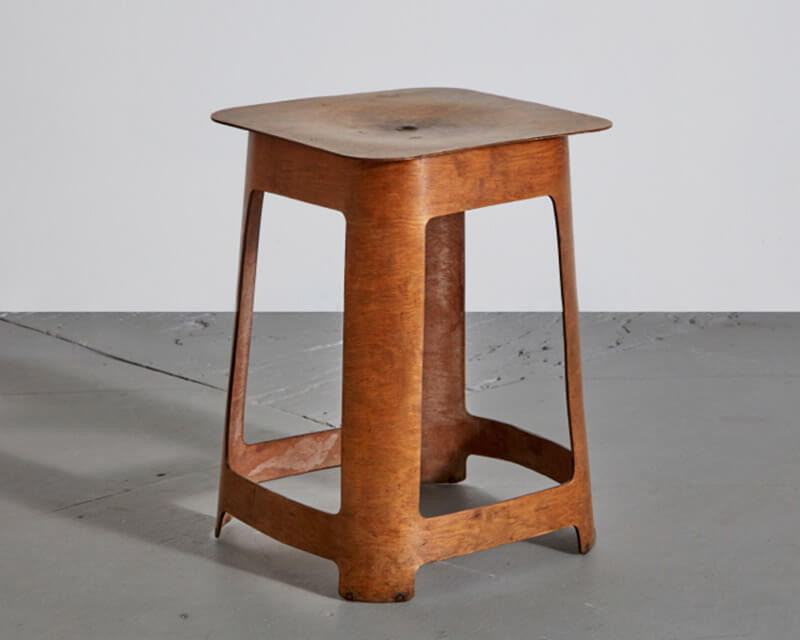 Several other well-known bent-plywood pieces were created in the UK in the interwar years. Gerald Summers designed the ‘Bent Plywood Armchair’ of 1934 for Makers of Simple Furniture, the firm he co-founded with his wife Marjorie. Meanwhile, Marcel Breuer and Egon Riss, both emigrés from Nazi Europe, designed the ‘Long Chair’ of 1936 and ‘Penguin Donkey’ bookcase of 1939 respectively for Isokon Furniture Company, which was co-founded by Jack Pritchard and Wells Coates and based at Lawn Road Flats in Hampstead. 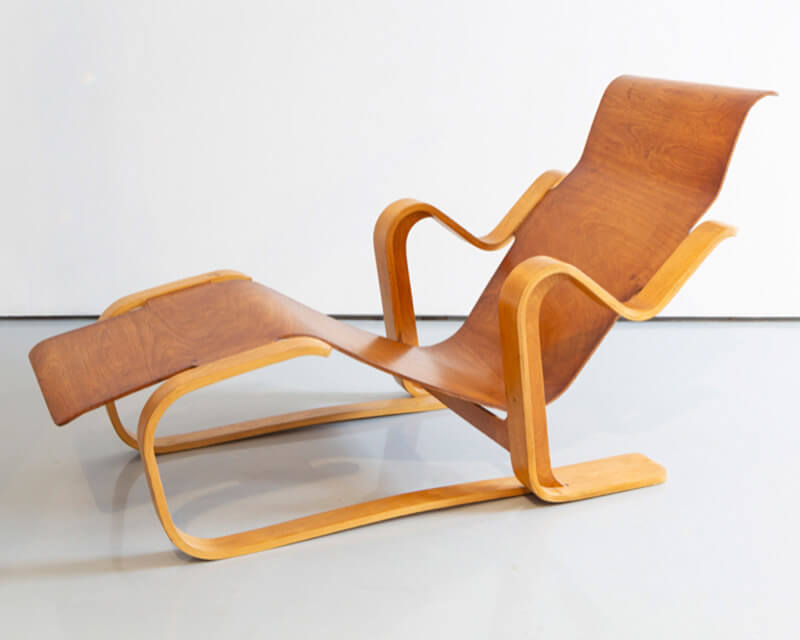 Pritchard revived Isokon briefly in the 1960s. And British company Isokon Plus, which produces original Isokon pieces and aesthetically similar furniture by younger generations, was founded in 1982. The show at R & Company’s newer premises on White Street, South Manhattan echoes the spirit of Isokon Plus since it displays Isokon-era pieces alongside contemporary bent-ply furniture by Chicago-based designer Norman Teague. The gallery dubs what it perceives to be an unbroken tradition, “the bentwood continuum”. 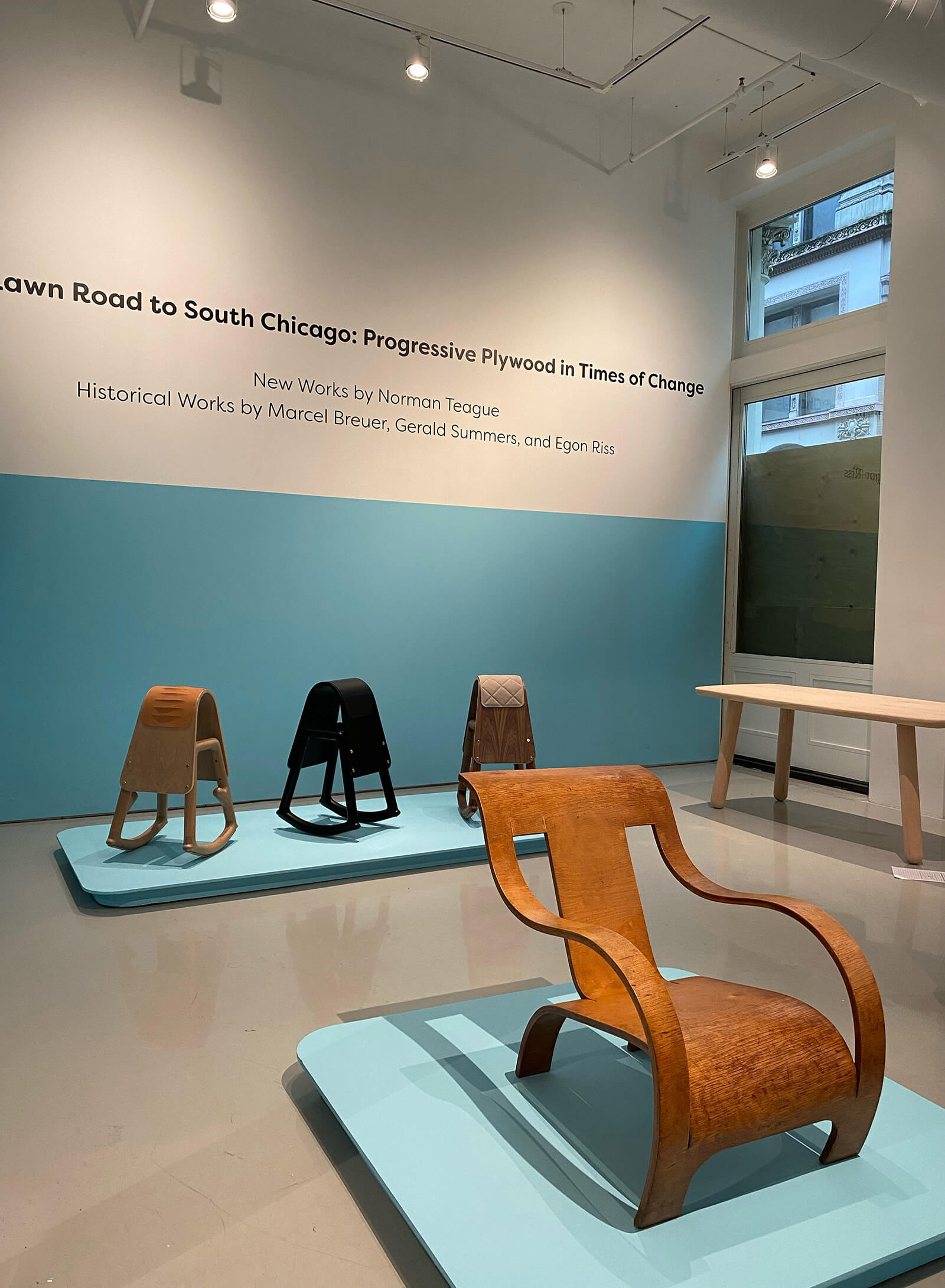 Teague is showing his ‘Sinmi’ rocking stools, fruit of more than five years’ experimentation with prototypes, initiated in 2015. “Sinmi” means to relax in West African language Yoruba. He is also displaying his new ‘Africana’ collection, comprising a chair and rocking chair, each in an edition of ten. Teague has carved decorative motifs on the chair whose frame is digitally fabricated by Max Davis, while its comfortable leather seat is made by Chicago-based craftsman Yohance Lacour. Compared with the pared-down Isokon-era pieces, Teague’s are elaborate and luxurious and come in various tones, from blond to black. 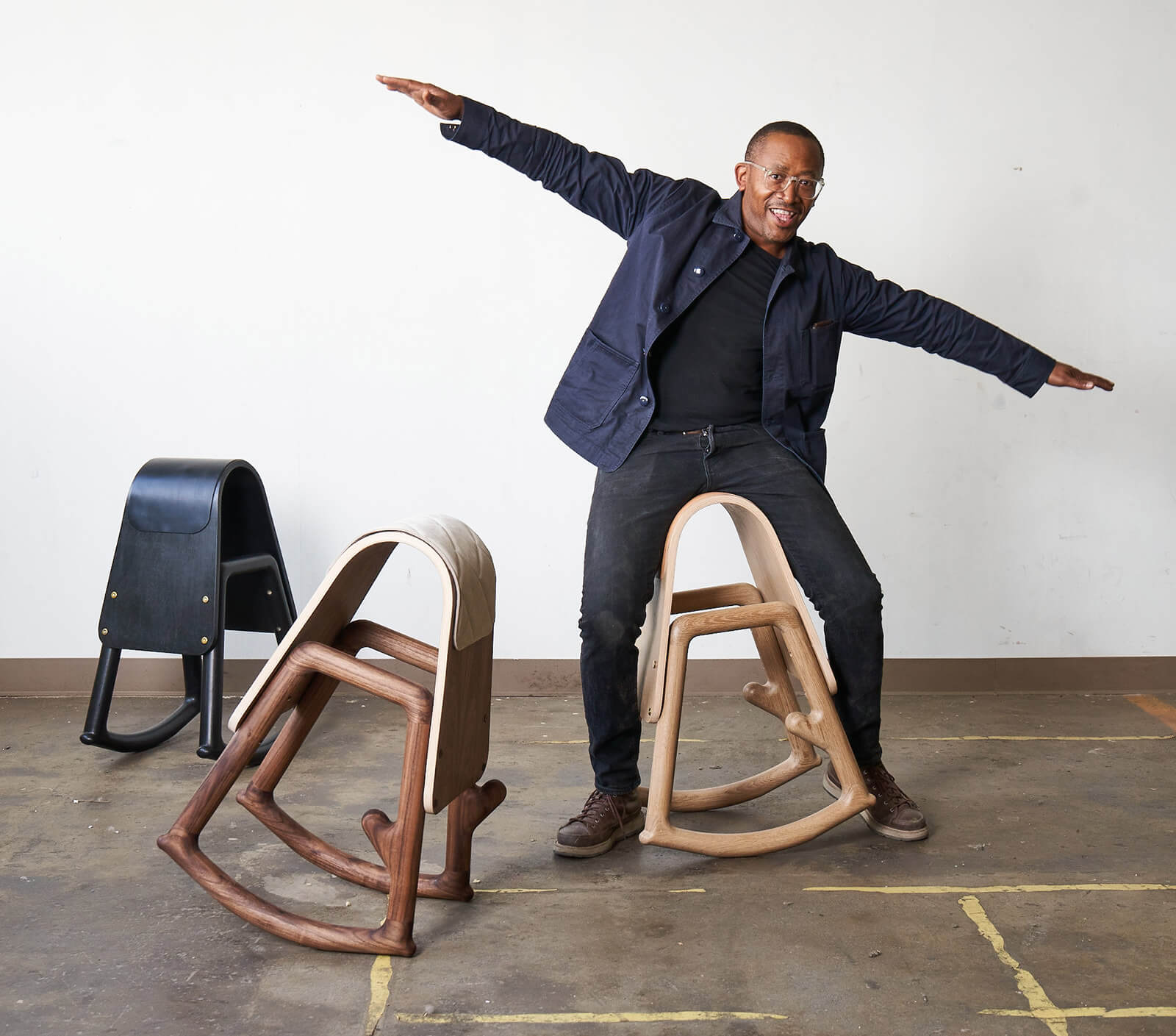 The show came about in a relatively unpremeditated way in unprecedented circumstances, says James Zemaitis, its curator and the gallery’s Director of Museum Relations. “In 2019, I’d curated our show, Bend it Like Breuer: Modern Plywood of the 20th Century, to coincide with the centenary of the founding of the Bauhaus. It was a hit with museum audiences in particular,” says Zemaitis, who brought his enthusiasm for early modernist European design with him on joining R & Company in 2016. 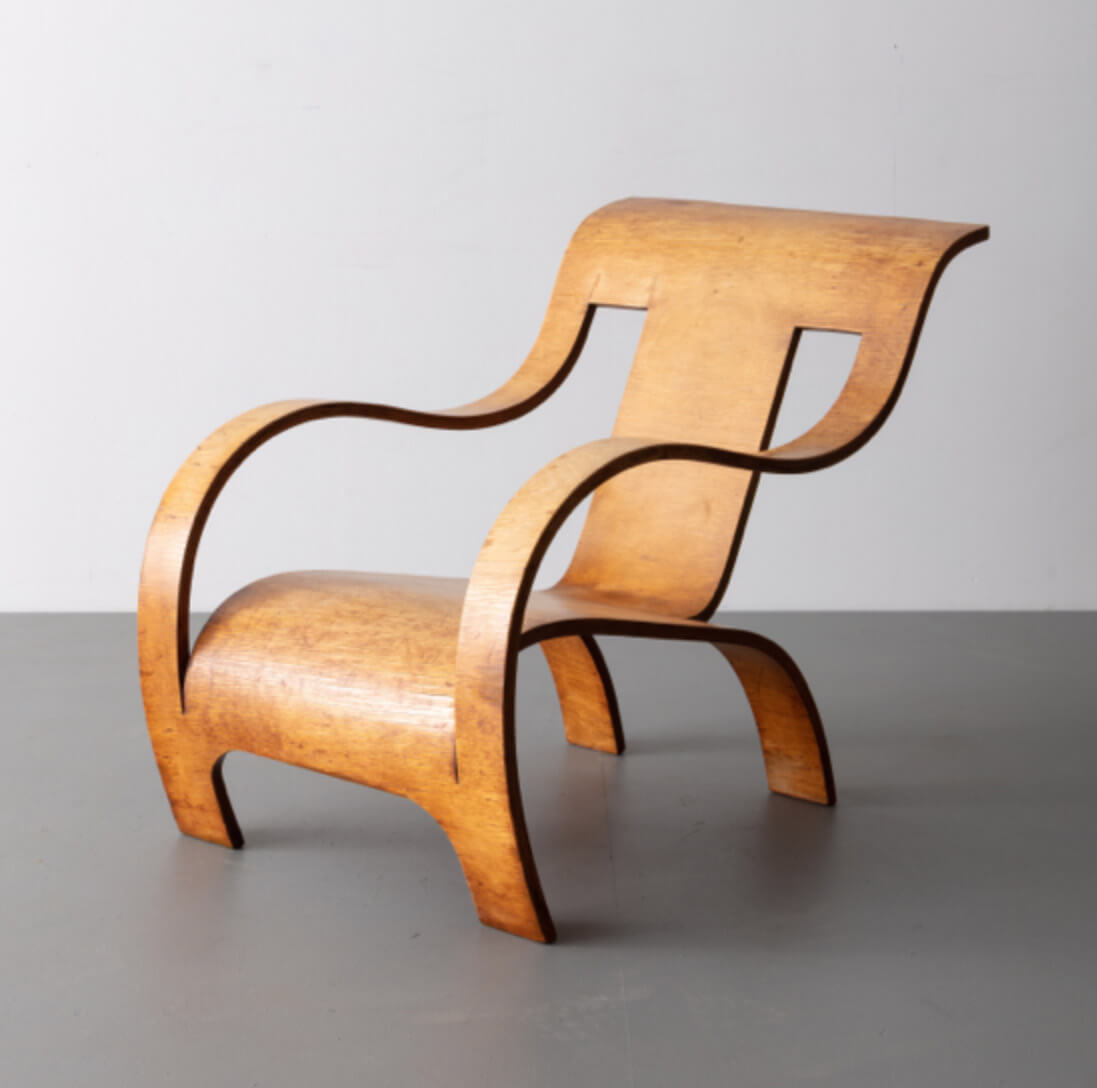 “Before the pandemic, I had an idea for an exhibition about 1930s British plywood furniture,” says Zemaitis, “I’d admired the 2017 Victoria and Albert Museum show, Plywood: The Modern World. I also buy British ply pieces from dealers on Instagram and have noticed my own most popular posts seem to be on plywood. I spotted that British curator Zoë Ryan had posted a picture of a plywood piece by Norman which she’d acquired for the Art Institute of Chicago when she was its architecture and design curator. I’d not heard of him but his name intrigued me: it sounded like a mid-century industrial designer’s name. I looked him up and was interested in his collaborative approach.”

Indeed, Teague’s name conjures up US designers Norman Bel Geddes and Walter Dorwin Teague. The latter designed exhibitions at the 1939 New York World’s Fair, where Aalto showed his ‘Paimio Chair’ to wide acclaim. Teague, says Zemaitis, is the first African-American designer the gallery has represented. Zemaitis feels the show has a political edge because it reflects the turmoil the US has experienced in the past few months. “Lockdown, the Black Lives Matter movement, the boarded-up buildings in New York with fear of protests if Trump lost the election … Normally, this might have been two separate exhibitions but these are difficult times and I wanted this show to feel more improvisational.” 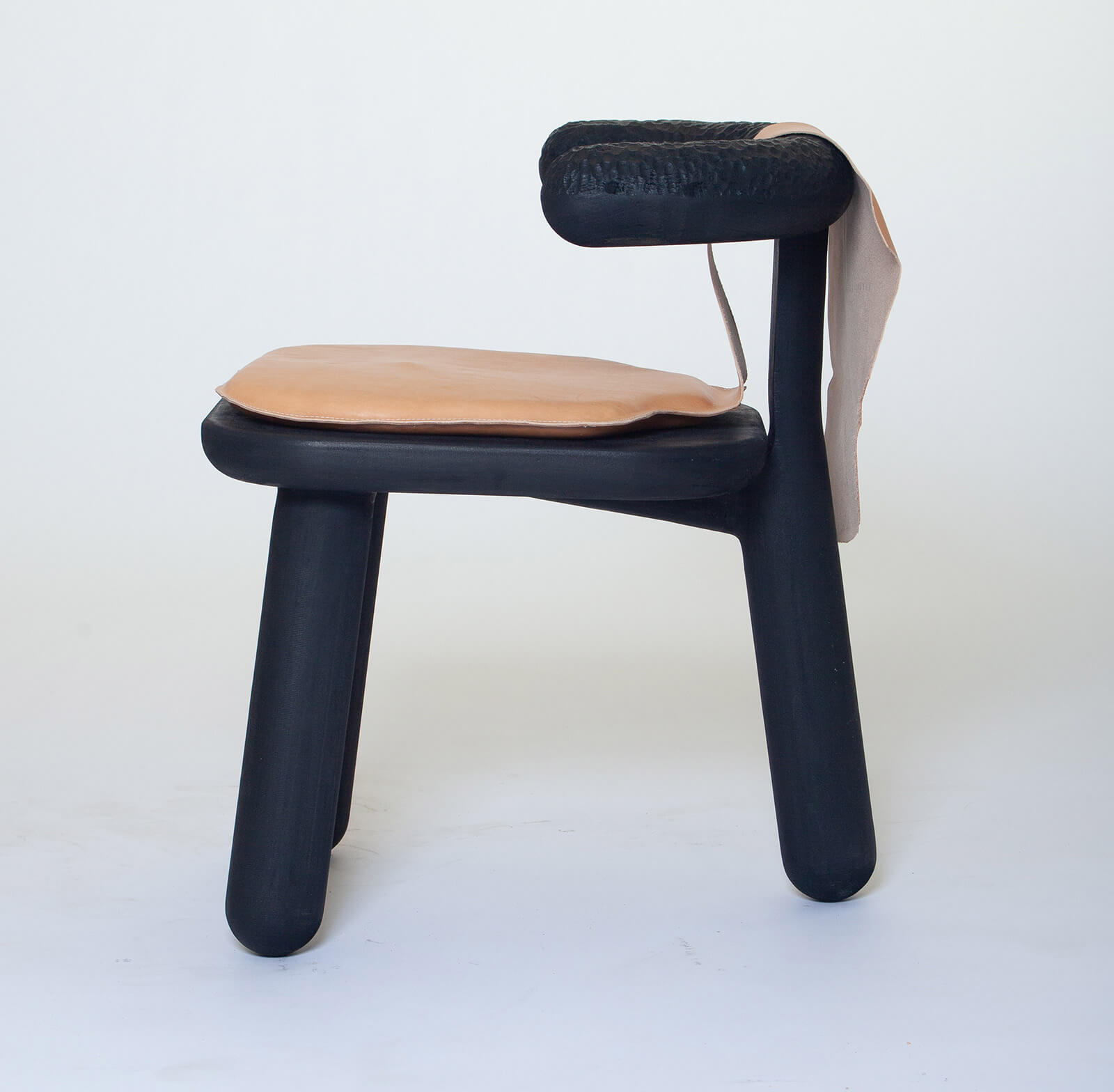 Teague doesn’t see his work as disrupting the bent-ply tradition but believes he can use design to empower black and brown communities. “My pieces are complementary to Isokon,” he says. “I adore Isokon’s testing of materials. But my work is an investigation of being an African-American contemporary designer, too. While studying product design [at Columbia College, Chicago], there were few black people teaching design history. If my work positively affects the mind of a little girl or boy, I feel it will have achieved something.”

R & Company – represents a distinguished group of historic and contemporary designers whose work is among the most innovative and finely crafted of their time. 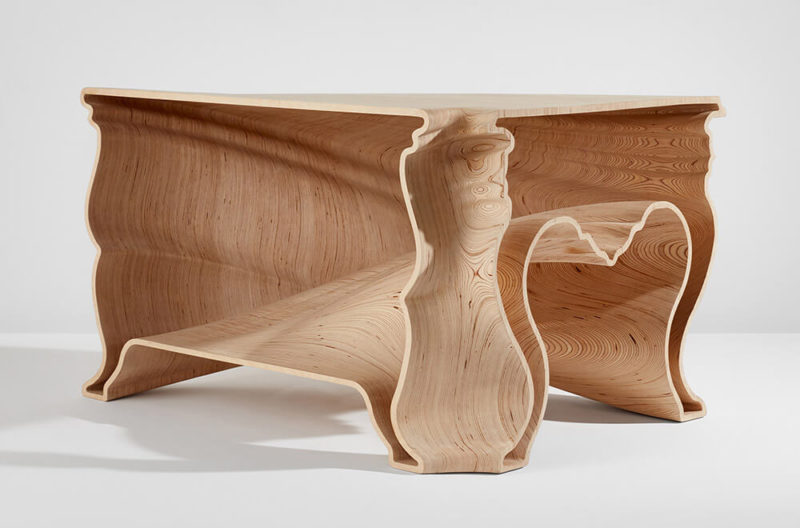